Work continues for Laurel Creek Hall as of June 11, with Thunder Hill Hall and Raven Rocks Hall in the background. 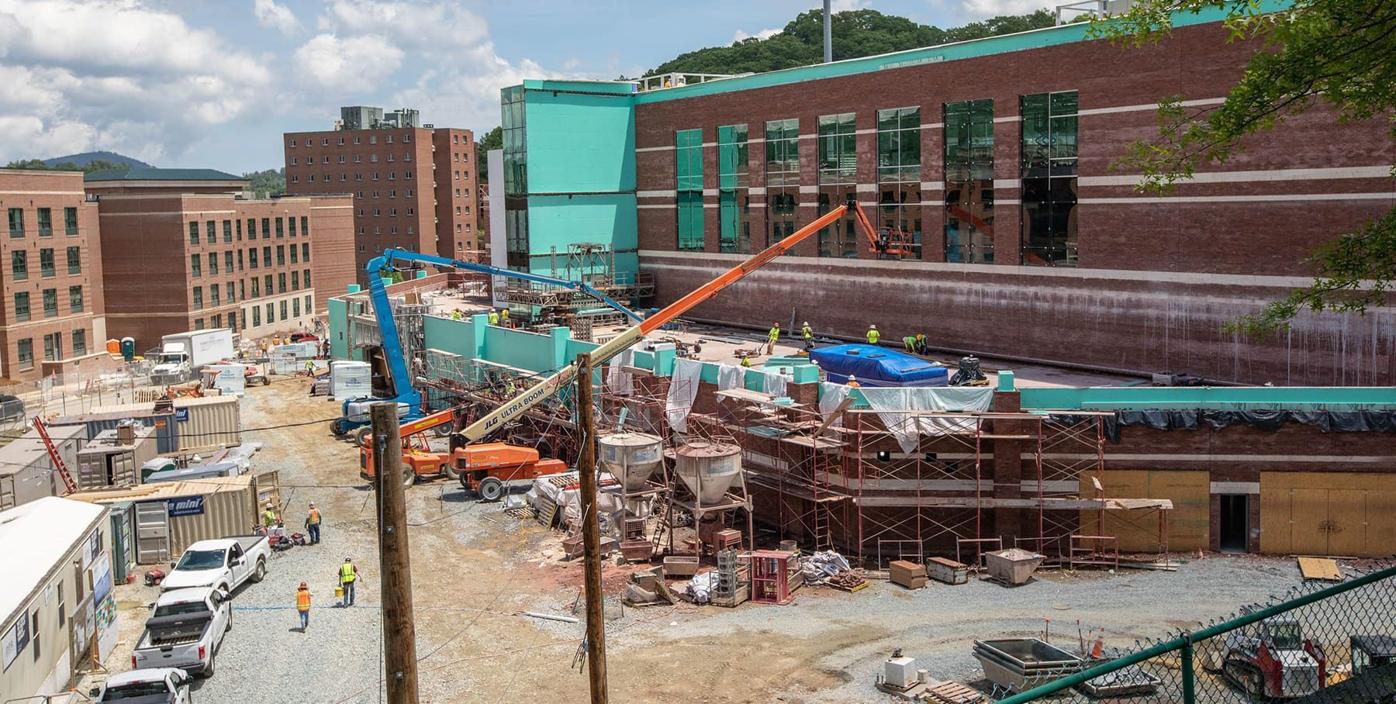 Work on windows and brick continues on the north end zone facility on June 25.

Work continues for Laurel Creek Hall as of June 11, with Thunder Hill Hall and Raven Rocks Hall in the background.

Work on windows and brick continues on the north end zone facility on June 25.

BOONE — Appalachian State University administrators are anticipating a 3 to 10 percent budget cut for the 2020-21 fiscal year due to the COVID-19 pandemic, and should know more about where the university may land financially in July or August.

Vice Chancellor for Business Affairs Paul Forte gave a brief update on the university’s budget expectations and capital projects at the June 26 Board of Trustees Business Affairs Committee meeting. Forte said the university is planning for a variety of scenarios in the case of a cut in the 3 to 10 percent range.

Committee Chair Scott Lampe stated that he’s heard the state is going to be several billion short in revenues, which may mean about a 10 percent cut for App State. Forte said if the reduction came through as a “flex cut,” it would mean about a $15 million reduction in the university’s general fund budget.

Forte added that administrators believe that enrollment growth money of $5 million is “reasonably assured” to be received.

“Nothing is 100 percent in this environment,” Forte said.

During the full Board of Trustees meeting on the same day, Chancellor Sheri Everts said the university is looking forward to welcoming students back to campus in August, but that administrators were not being “naïve” during their planning. She said University of North Carolina system representatives continue to watch COVID-19 metrics and how they might impact university plans.

“As we look at a variety of scenarios for a return to campus, we recognize one likely scenario might mean we pivot to online instruction,” Everts said. “As we continue watching the numbers, I, along with my leadership team, continue to appreciate our partnerships with faculty and staff, as well as continued conversations with student leaders, to ensure the safest path forward.”

Lampe said App State could have a “serious enrollment problem” as the university faces an unknown of how much online instruction it may be forced to provide.

“Anecdotally, what I hear is that a lot of students aren’t real interested in paying for housing, dining and all of the other things associated with coming to college if they have to be taught online,” Lampe said. “My guess is that is going to affect enrollment. If that happens, we’re going to have to look at a different set of cuts … potential job cuts and eliminations throughout the spectrum of employment here — faculty, staff and across the board.”

Lampe followed up by saying he didn’t think that would happen, and thought the university was in “good shape.”

According to The Daily Tar Heel, the University of North Carolina at Greensboro recently notified its students by way of a housing contract addendum that the university is not obligated to offer refunds if fall 2020 students living on campus are forced to move out due to a COVID-19 outbreak. The publication stated that UNC Greensboro clarified that this policy was a UNC system decision, and may affect all 17 schools in the UNC system. UNC spokespersons stated the following day that UNC Chapel Hill was planning to provide prorated rates to students.

Lampe said it was not App State’s intention to add language to housing contracts that would bar refunds. He added that he suspected that the Board of Governors would overrule a policy that would not afford students refunds. While refunds would be the right thing to do for students, Lampe said it would be an issue for the university financially.

“We still have debt service on those buildings; we have security, maintenance staff and programming staff that we won’t have any revenue to support,” Lampe said. “We don’t have the reserves to carry that for the semester.”

Everts mentioned that the university made an “extremely difficult” decision earlier in June that 106 full-time employees in the Athletics department would be furloughed. During the Board of Trustees Athletic Committee meeting, Athletic Director Doug Gillin said the furlough was to last 90 days starting on June 15.

“Human Resources and Business Affairs have been diligently engaged in finding ways to protect as many jobs as possible,” Everts said. “To avoid additional furloughs, I asked that staff in other areas — including Campus Dining — be reassigned to the important work of safely returning our students, faculty and staff to campus.”

Gillin discussed other measures Athletics had taken to reduce its budget for 2020-21, which resulted in a 20-30 percent operating expense reduction. He added that his department hasn’t rehired positions in which employees retired or otherwise were no longer in the role.

Additionally, Athletics will reduce the amount of travel for App State teams and reduce the number of competitions in which it competes in all university sports where possible. Athletics staff have instructed teams to compete within driving distance, with some overnight games to be allowed.

Forte brought the Business Affairs Committee up to speed about the university’s ongoing capital projects — which is about $250 million worth of projects, he said. Forte said the Kidd Brewer Stadium north end zone facility is still on track to be completed for the first home game of the season. Gillin mentioned he had the recent opportunity to tour the facility with Everts, and stated that the facility will be beautiful and amazing.

Sanford Hall renovations are on track, Forte said. Director of Planning, Design and Construction Jeff Pierce stated in late February that Sanford was planned for a partial opening by December and a final opening in spring 2021.

Forte also mentioned that administrators may have to contemplate on how to move forward with expansion plans for App State’s Child Development Center. Boone Town Manager John Ward said that the Planning Commission had a 7-0 vote to deny the university’s E1 zoning request for the center. The Boone Town Council hosted a public hearing on the matter on June 22, but has not had a formal vote on the rezoning request.

BOONE — Appalachian State has selected names for the four new residence halls being constructed near Kidd Brewer Stadium, it was announced lat…

Appalachian has been gutting academics for years now. Doesn't Lampe, quoted in this article, know this? He's on the Board of Trustees. Athletics, student services and soaring administrative salaries have been getting more and more of the state funding and student fee money. (Athletics, however wonderful it is, does NOT make a profit for the university. Go look it up instead of spreading that propaganda.) So if they have to do budget cuts, they had better not take it out of academics. Academics is the driving force of the university and has been doing more with less for years now. Stop requesting money to spend on capital projects and new turf grass and start advocating for academics. The faculty sounded the alarm about this 2 years ago. Faculty questioned the spending priorities. But they always get rationalized.

Wow, it's almost like investing 100's of millions of dollars in needless infrastructure (looking at you, football and new dorms), Athletics, and administrative bloat might put a strain on the University financially. Who would have thought?!

The fact that these jokers are acting surprised by it is even more telling of how shortsighted they really are. The writing has been on the wall for years now, higher ed is moving more and more into the digital realm, and students are less and less interested in footing the bill for over-priced, and underwhelming, entertainment complexes.

Still waiting on the Chancellor to respond to a request to voluntarily reduce her salary to help make up for these predicted budget cuts, and to help avoid furloughing any more workers. Her salary alone could employ *TEN*, FULL-TIME, lecturers.

Resource vampires, each and every last one of them.