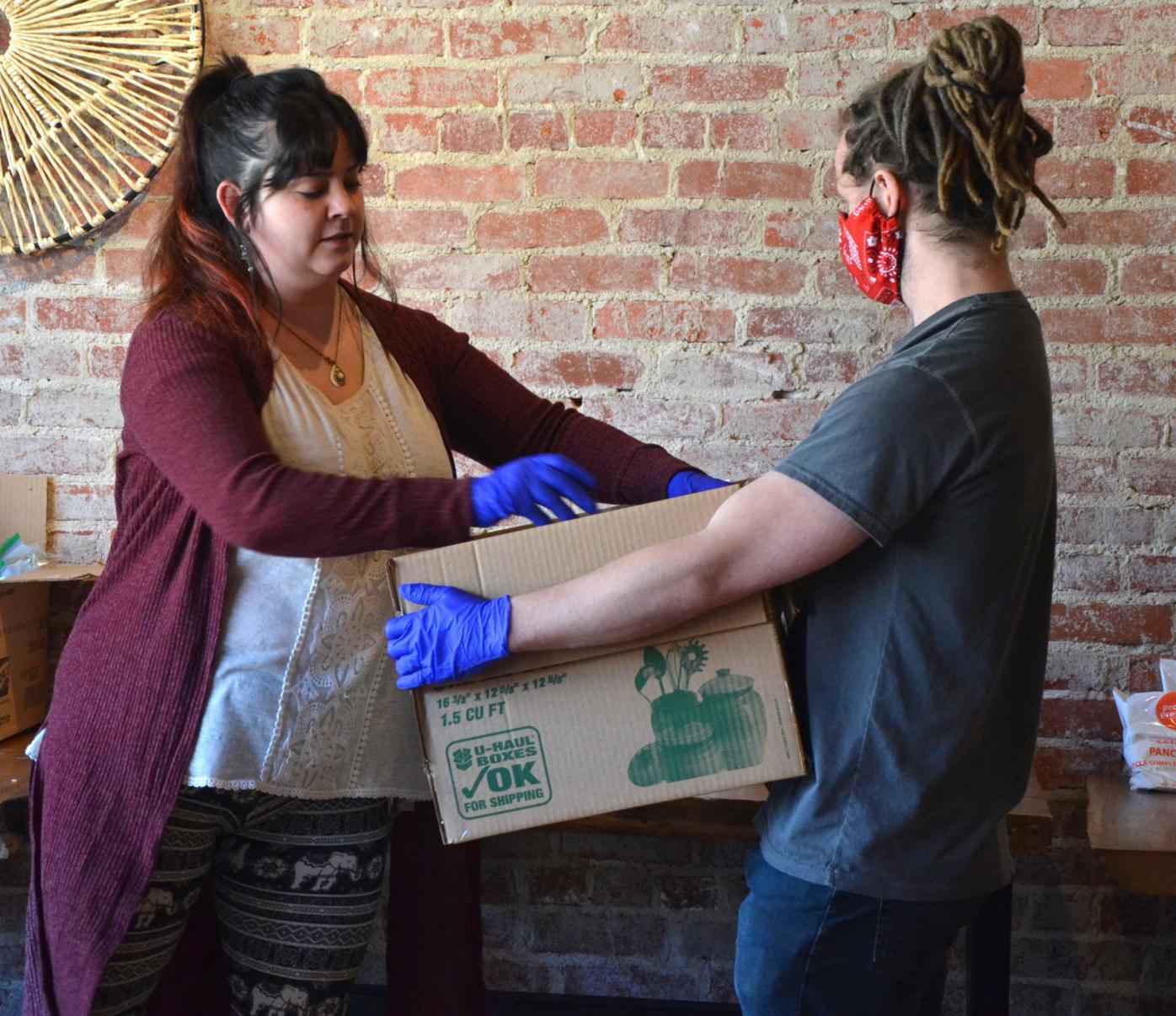 Harmony Blue and Jack White place food items in a box for the CARE.BOX initiative. 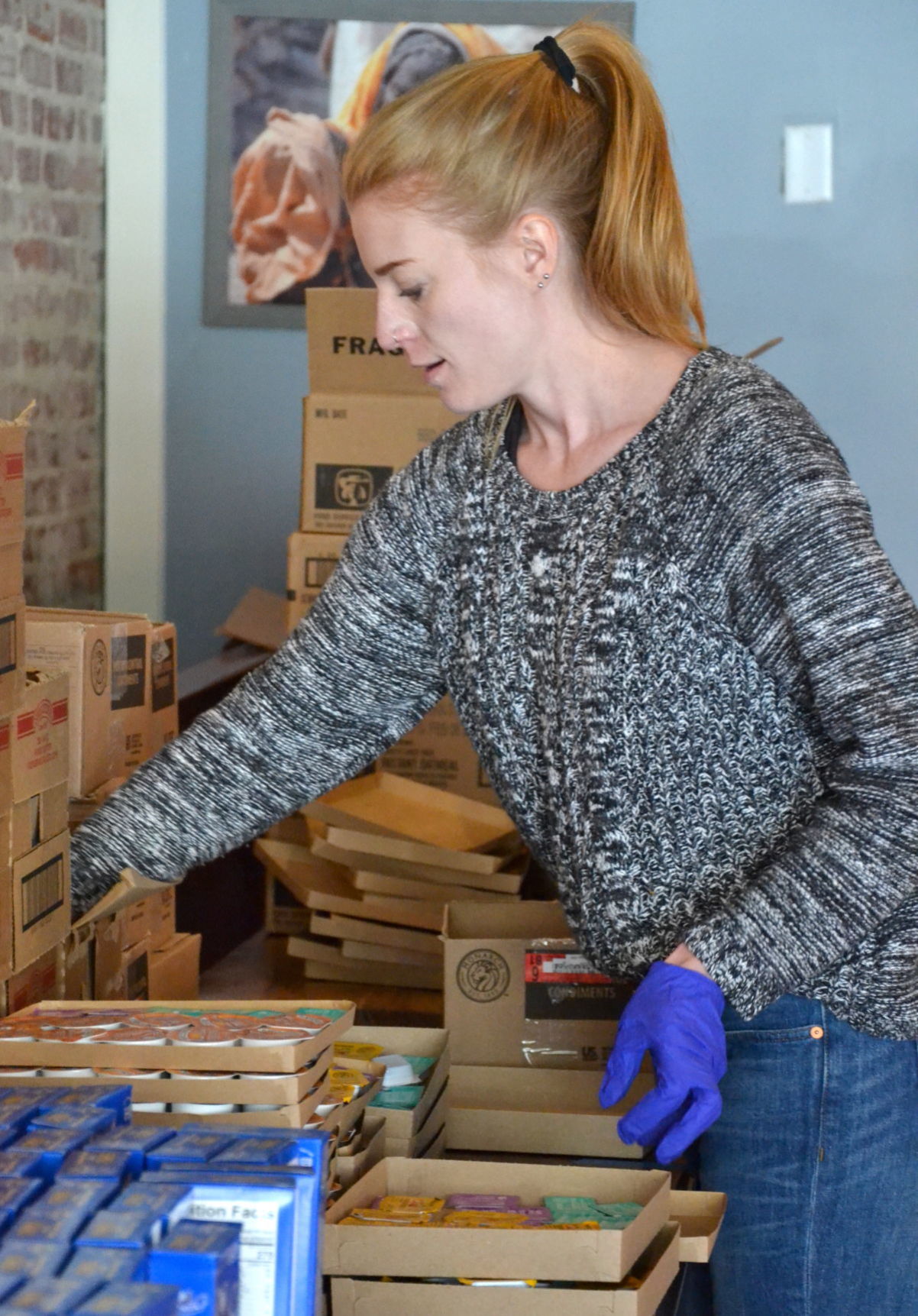 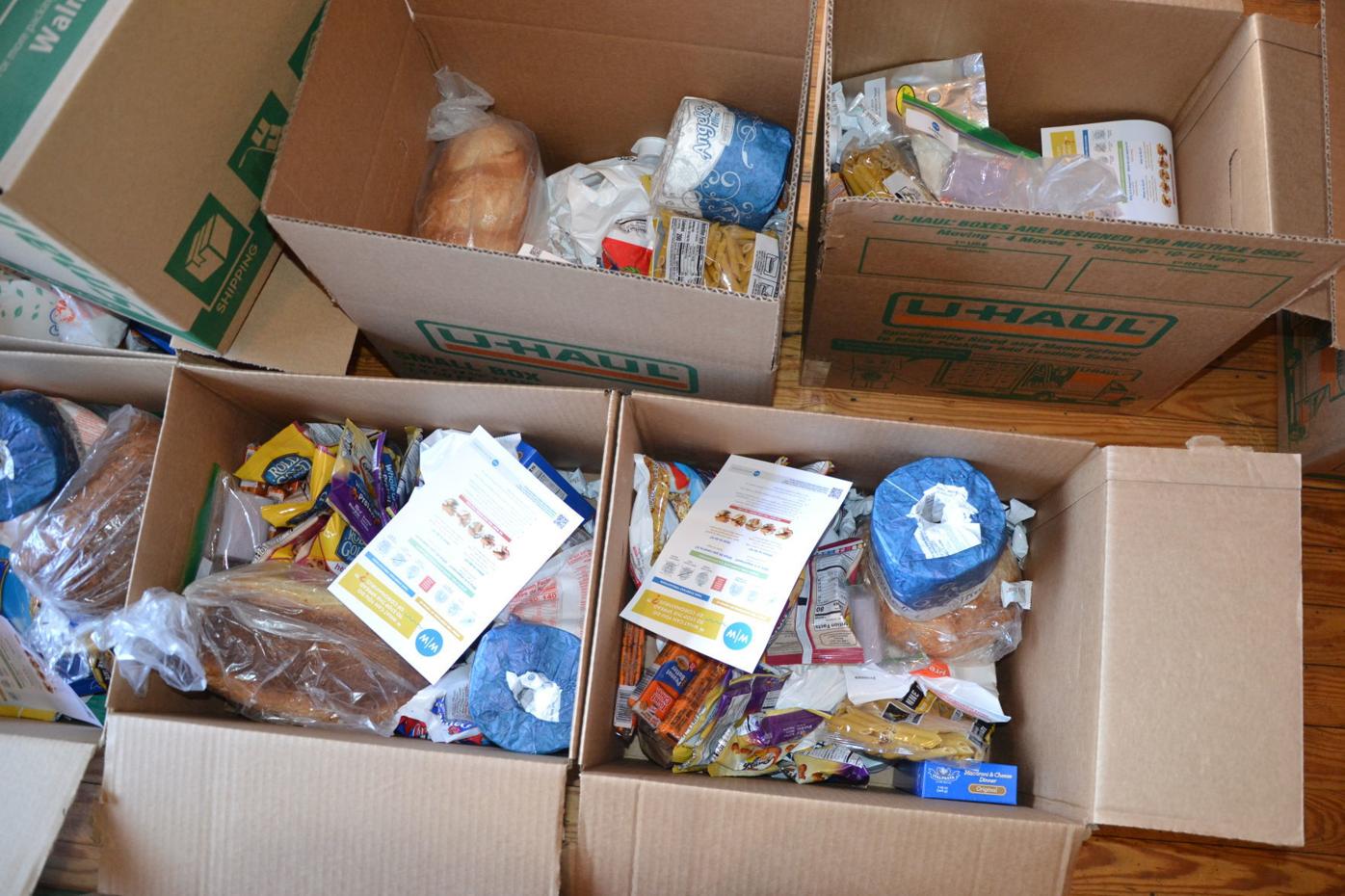 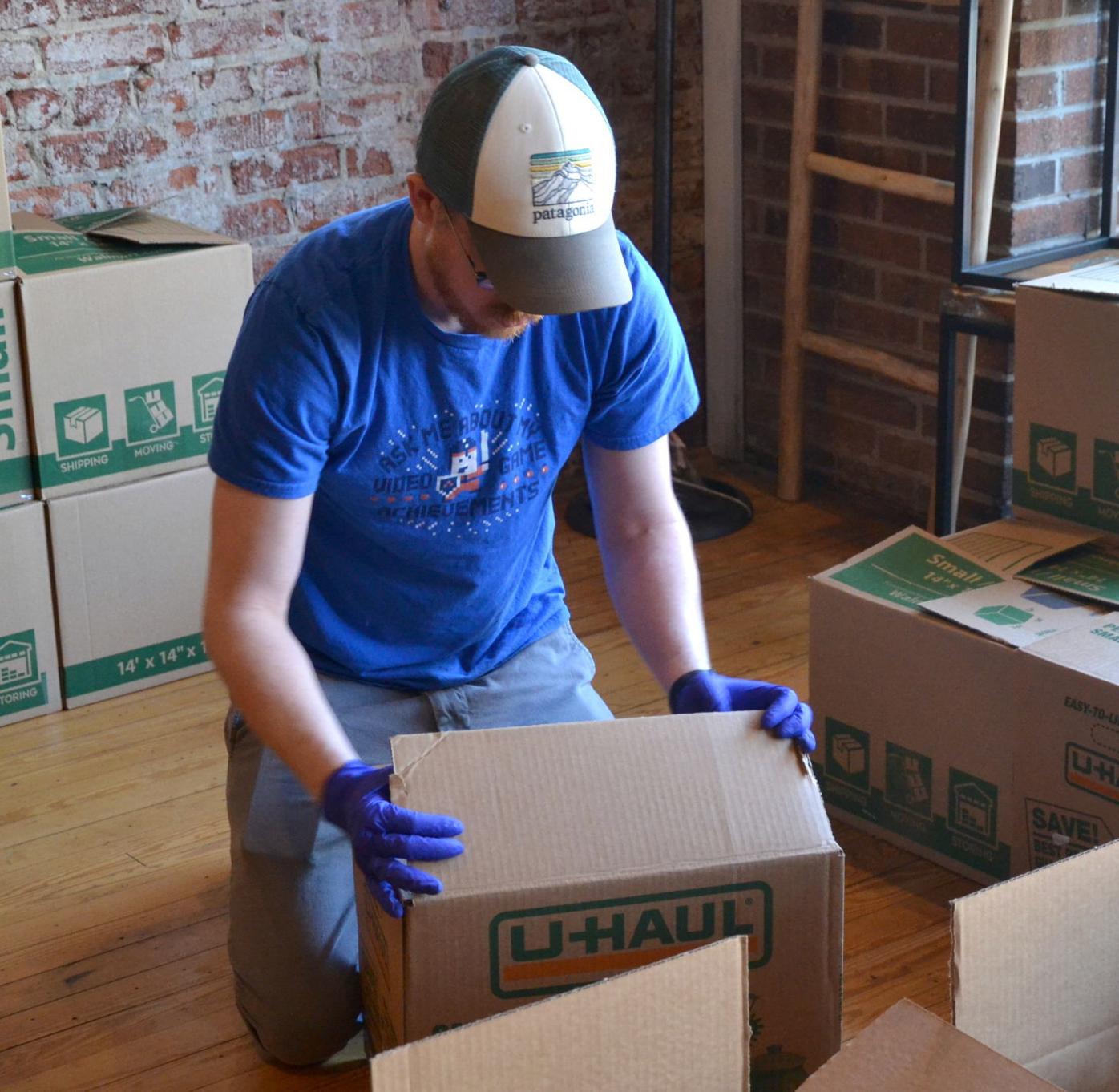 Ethan Coats folds boxes at Ransom to help with CARE.BOX.

Harmony Blue and Jack White place food items in a box for the CARE.BOX initiative.

Ethan Coats folds boxes at Ransom to help with CARE.BOX.

An initiative that started in Boone with an original goal of packing 100 food boxes for service workers temporarily laid off due to COVID-19 has grown to just under 900 boxes of food with the potential to launch in other locations.

Ransom Pub, Wine to Water and Vincent Properties partnered together to launch CARE.BOX — an initiative that gives boxes of food and hygiene products to local service industry workers. With one week of planning, the three partners launched its first CARE.BOX pickup and put together 400 boxes of food for the community.

Booneshine co-owners Tim Herdklotz and Carson Coatney heard about CARE.BOX and reached out to the project’s leaders to express interest for Booneshine employees. The business is running at a fraction of its typical operation since it’s only able to offer to-go options. In CARE.BOX’s first week, Herdklotz said he and Coatney picked up 40 boxes and brought them to Booneshine for employees to pick up.

“Our first priority is trying to make sure we’re doing everything we can do take care of our staff,” Herdklotz said. “(CARE.BOX) provides the basics that you need. Having access to food right now is extremely important. It’s a given that we’d do anything that we can to help our employees with that.”

Surprised by the immediate need for food and the reaction to the CARE.BOX initiative, Todd Hendley — a managing partner of Ransom — said organizers took the following week off to regroup and make a plan. CARE.BOX is now in its fifth week of operating and fourth round of food box pickups, and is expected to have distributed roughly 900 boxes by the end of April 17. With roughly 40 meals provided in each box, CARE.BOX will have provided around 36,000 meals.

Included in this amount is 50 boxes for businesses in Raleigh. Hendley said that a few Raleigh restaurants had heard about the CARE.BOX initiative and wanted to partner as well. During the last two weeks, CARE.BOX leaders have been developing a framework that would help businesses in other locations launch similar programs. The group has even received interest from a few locations across the country who also want to start similar programs.

Hendley said there’s a need for these food boxes, so the group is trying to “run” as fast as it can to meet as much of the need as possible.

Since the start of CARE.BOX, the Booneshine co-owners have communicated with their staff to notify them of food pickup times at Ransom in the case their employees needed more food. Employees have also been able to order meals from Booneshine on the days the business is open, Herdklotz said.

“We’re caring for our employees the best that we can, whether it’s financially or helping them emotionally,” Herdklotz said. “We’ve communicated with all of our team that we know this is going to be hard and we have to help each other through this, but we’re going to remain positive. We’re going to make the best of it and come out at the end of this even stronger as a family here.”

CARE.BOX originally started with a focus of “serving our service industry,” to give food to those in that field. While this remains the target audience for CARE.BOX, Hendley said anyone in need can come get a box.

During CARE.BOX’s first week, Hendley said the three partners were willing to front the cost of the initiative with a website link for people to donate if they wanted to help offset some of the costs. With a total of $30,000 donated for CARE.BOX as of April 16, the program has become fully funded by the community, according to Hendley. All of the proceeds from the donations go directly to CARE.BOX.

Hendley emphasized that money raised in the High Country will be used for the local community. Businesses starting CARE.BOX initiatives launched elsewhere will be responsible for their own fundraising. To donate to CARE.BOX, visit give.winetowater.org/boxprogram.

Additionally, local businesses and groups have donated food items for the boxes. Stick Boy Bread Co., Conrad’s Coffee, Hospitality Mints, Horton Hotel, First Baptist Church of Boone, Lost Province, The Cardinal, F.A.R.M Café and Mellow Mushroom have all given food items or bags to CARE.BOX at least one week during its duration.

“It’s just so cool to see how the community and different organizations are stepping up to make sure 36,000 meals can get out to people,” Hendley said.

The project wouldn’t be successful without its 40 or so volunteers, one of which is Kari Mace, Hendley said. Mace stated volunteering with CARE.BOX on March 19 and has been present each packing and pickup day to ensure the process runs smoothly. She said she helps to lead the other volunteers and organize how the food is being packed and where it goes.

Mace is a nanny for local children, and is currently unable to carry out her duties due to COVID-19. She saw a post about CARE.BOX on social media and said she felt it was a great way to spend her time to give back to the community.

“I believe there’s a really big need and just want to do anything I can do to help,” Mace said. “It’s so shocking, driving around town and looking at different businesses that aren’t open, knowing that so many people have lost their jobs at once. It’s not because they weren’t doing a good job or they’re not employable. It’s something outside of themselves they can’t control.”

Volunteers come together to pack boxes on Wednesdays to allow people to pick the food up on Thursdays and Fridays. Those who come to pick up Care Boxes seem grateful, but Mace guessed that they might feel self-conscious, too.

“We try to just let them know that ... we’ve got something you need and we’re all trying to do this together,” Mace said.

Mace has lived in the area for 25 years, and said while she isn’t surprised that Boone has shown up in this way for its community, she certainly hasn’t experienced anything like it.

For more information about CARE.BOX, contact care.box40@gmail.com. To volunteer, sign up to receive a CARE.BOX or to donate, visit give.winetowater.org/boxprogram.

In less than a week, multiple groups have rallied to help High Country community members in the midst of the COVID-19 pandemic that’s leaving …