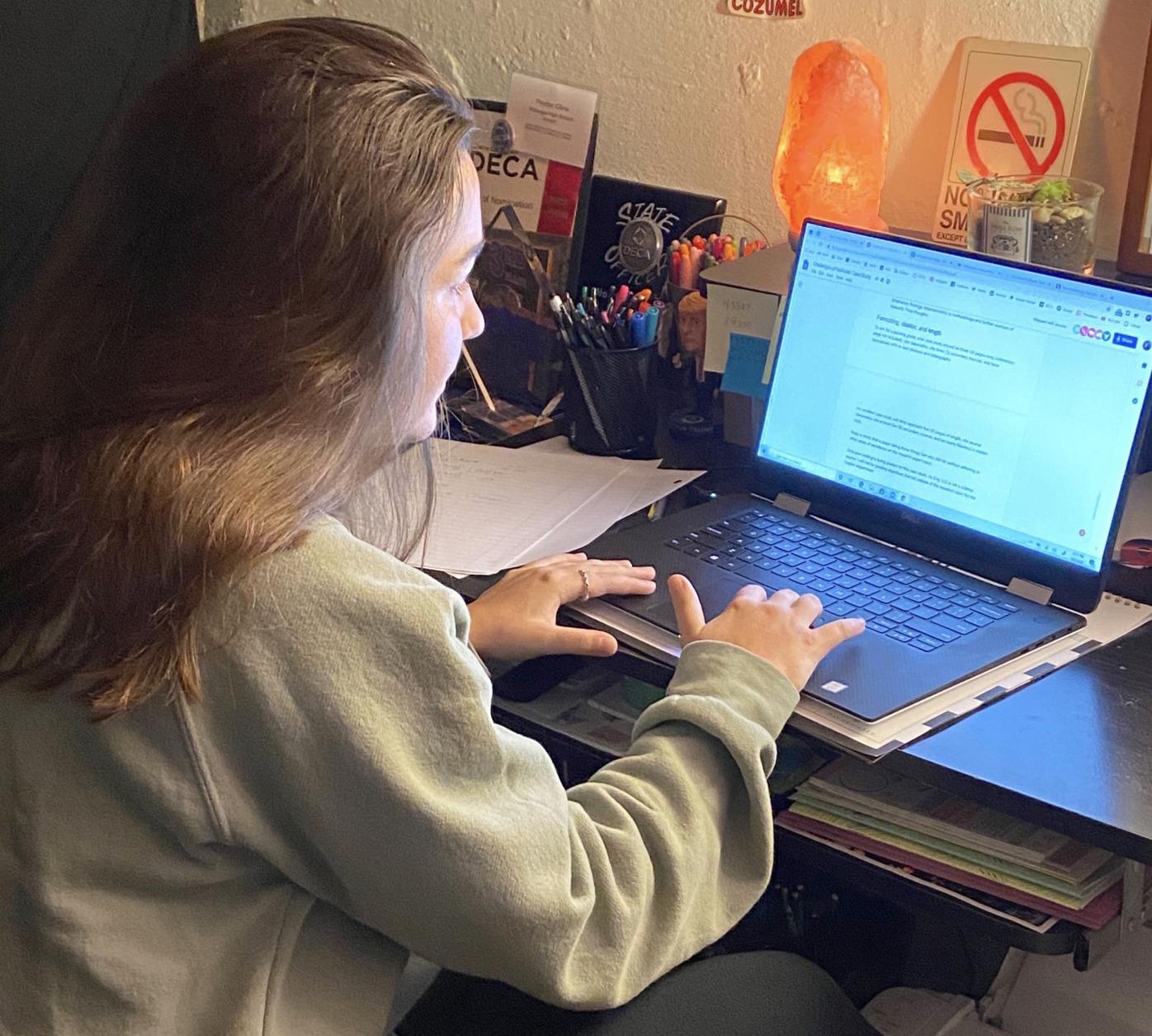 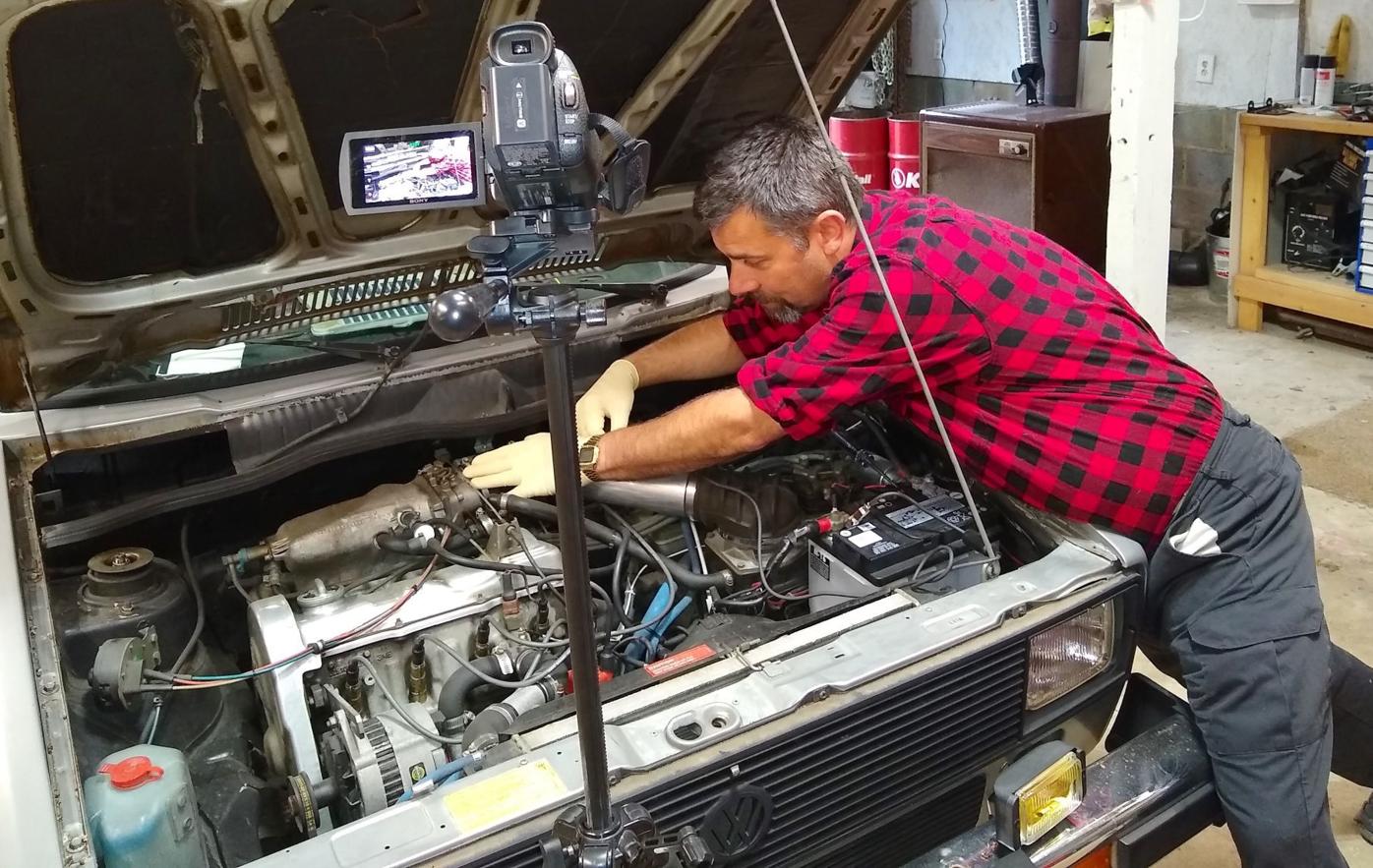 Erik Mortenson uses a recording device to video tape himself working on a vehicle to help his auto tech students learn remotely.

Only being able to see her classmates through a computer or phone screen was not how Watauga High School Senior Class President Peyton Cline pictured the latter half of her senior year.

April 13 will mark one month since Watauga County Schools students were last in their classrooms going about their regular day before all North Carolina public schools were mandated to close due to the COVID-19 pandemic. Cline recalled being at school on March 13 and said rumors were circulating the halls of whether students were going to be able to return to school. She was shocked when communities were told that public schools were to be closed for in-person instruction until May 15.

As North Carolina officials wait to see how the pandemic transpires, it’s unknown if students will indeed return to school after May 15. Thinking of all of the senior milestones she might miss has been difficult, Cline said.

“Being in the Watauga County School system for 13 years, and possibly not really being able to say bye to it and being able to have all of these senior traditions that you’ve looked forward to as a student for so long is disheartening,” Cline said. “You’re only a senior in high school once. It feels like a premature goodbye.”

Cline has looked forward to events like the annual capping ceremony, senior scholarship night and banquets for clubs she’s involved in such as student council and DECA. One she was looking forward to most was a Watauga High School tradition in which seniors parade through their K-8 schools in their caps and gowns. Cline was looking forward to visiting her K-8 school, Green Valley, and seeing her former teachers and being greeted by the school’s current students.

“There have definitely been some tears shed about possibly losing prom, graduation and capping,” said Wes Calbreath, a WHS counselor. “But right now those events are not canceled. We are hoping that the school can start back up on May 18 and we can do all of those things.”

Cline has already purchased her prom dress and hopes she’ll still be able to wear it. She said she has been “bouncing ideas” back and forth with other student council members to discuss how students can celebrate prom in a different way — such as still getting dressed up, taking pictures and ordering takeout at home.

Calbreath said he and other counselors have been working to support students’ wellbeing. He has been conducting virtual check-ins and phone calls to keep communicating about college and scholarship processes.

“We’ve had to adjust some standard processes, but with a little creative thinking, we’ve been able to handle whatever is thrown at us,” Calbreath said. “As a department, we have been in touch with someone in the household of every single kid at WHS to check on them, assess needs, troubleshoot any learning issues and just let them know we are here for them.”

Calbreath said there have been a few Google Hangouts for the purpose of senior bonding, and even a virtual karaoke session one day. A different day Calbreath read a Dr. Seuss book called “I Am Not Getting Up Today” for students to listen to virtually. During the April 6 Watauga Board of Education meeting, student representative and senior WHS student Emmie Huffman said students were trying to stay connected with online methods. She said the WHS community was prioritizing each other and making sure others were OK.

“I didn’t realize how much I enjoyed being at school and valued it so much, especially with it being my senior year,” Huffman said.

Student council members meet several times a week via video chat to check in with each other and think of ways that the student body can still connect with each other. The group was in the process of forming a spirit week campaign asking students to submit photos of their WHS spirit to be posted to the student council’s social media pages.

Cline wanted to remind her classmates to remain hopeful, as she knows it’s a difficult time right now.

“I know it’s easy to kind of sulk, get down and get in a pit of sadness and depression,” Cline said. “Keep pushing through, and stay positive.”

Cline said two of her four classes were already online, so transitioning to remote learning wasn’t as difficult for her as it was for others. However, she said her calculus II course is challenging to take online as she tends to be a visual learner.

Career and technical education courses at the high school have still continued even though teaching may have taken on a new form. WCS spokesperson Garrett Price said foods teachers Morgan Lloyd and Amanda Beane are making cooking videos for students to view. Additionally, Mark Shepherd, the school’s masonry and carpentry instructor, is creating videos of himself participating in a masonry project from start to finish.

“We are very fortunate to have multiple online partners that provide engaging online activities to our students,” said Tierra Stark, the WHS assistant principal and CTE director.

According to Stark, the CTE department took a big hit to its nursing fundamentals program. The only way students in that program can sit for their board examination is to attend 40 hours at a clinical site. Due to the pandemic, students have not had the opportunity to work in a clinical setting. Community partners were working with the school for an expedited clinical setting, but were not able to get started before the school closed on March 13, Stark said.

Teachers in the cosmetology department of the high school have found an innovative way to ensure students can still obtain mandatory logged hours. Angie Alexander, the director of cosmetology at the high school, said students are completing assignments via the Canvas platform, which calculates their hours and can be downloaded per the N.C. State Board of Cosmetic Arts.

Students are required to have at least 1,200 theory and hands-on hours before testing to become a licensed cosmetology. Using Canvas, 44 students are continuing to learn with the theory part of the curriculum. Additionally, Stark said cosmetology students were provided a take-home kit and mannequin.

As an instructor in the Watauga High School/Watauga Innovation Academy automotive department, Erik Mortenson said during normal operations, his auto technician class is usually about 70 percent hands on and 30 percent spent in the classroom. Transitioning the class online was difficult, but Mortenson said he’s made it work.

A company called Electude has offered a work-at-your-own-pace website version of what Mortenson teaches in the classroom for free for the remainder of the semester. Mortenson has supplemented this tool with weekly live chats via Google Hangouts to connect with students and allow them a chance to ask questions.

Additionally, he said he’s added some how-to videos that he’s filmed from his own garage so students can watch and hopefully learn some of what would’ve been demonstrated in the school’s auto shop. For students with limited or no internet access, Mortenson said he has sent them textbooks and workbooks to work from.

“While it can’t possibly replace the critical hands-on work we do in auto tech, it does at least provide the students with those classroom basics we can no longer cover in person,” Mortenson said.

“A few of the more creative students have also asked if I would allow them to receive extra credit if they documented some type of repairs they performed at home,” Mortenson said. “Many are working on parents’ cars as well as small lawn mowers and such. They take photos and email me daily updates. It’s been really great to see how interested they are even on their own.”

Mortenson had been working several months with a group of students to build an electric car and have it on the road before the end of the school year. The pandemic has halted the project, and Mortenson said several seniors with the project are now worried they won’t have the opportunity to see the project through.

“I’d be lying if I didn’t say that this has been a sad time,” Mortenson said. “The teachers all miss the students, and many of the students miss the great things they were learning and doing at Watauga High.”