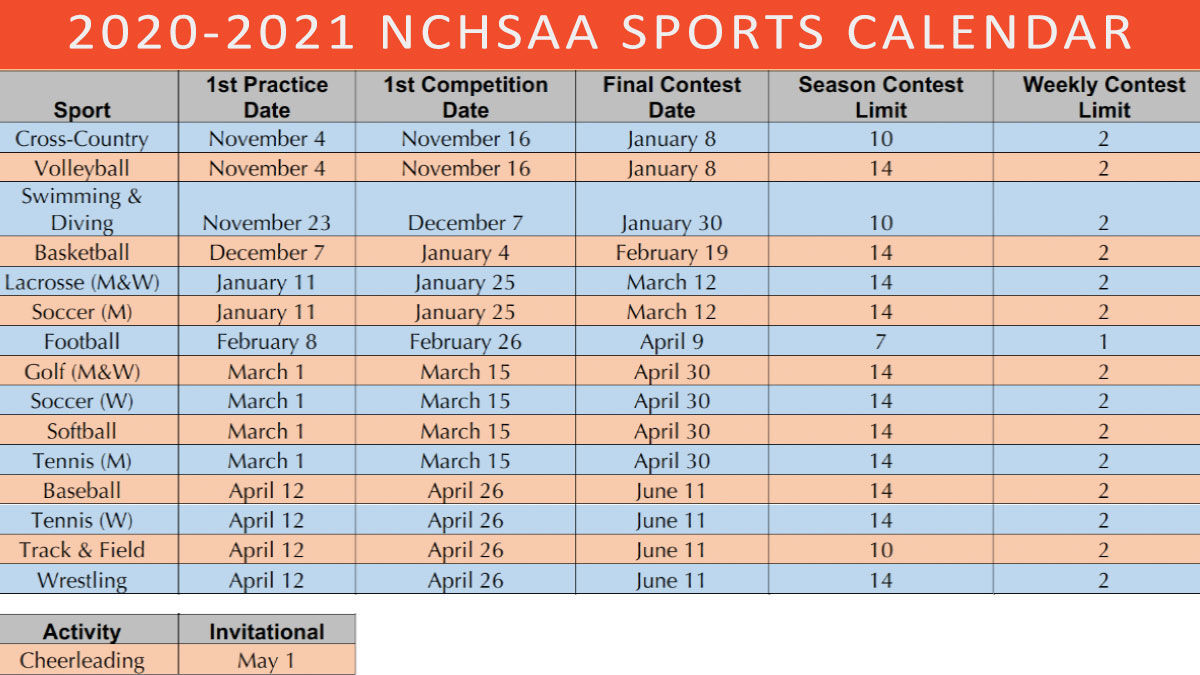 The NCHSAA announced a revised 2020-21 athletic calendar during an Aug. 12 briefing. Highlights of the calendar include at least four fall prep sports, including football, shifted to begin practice and competition during the spring semester. 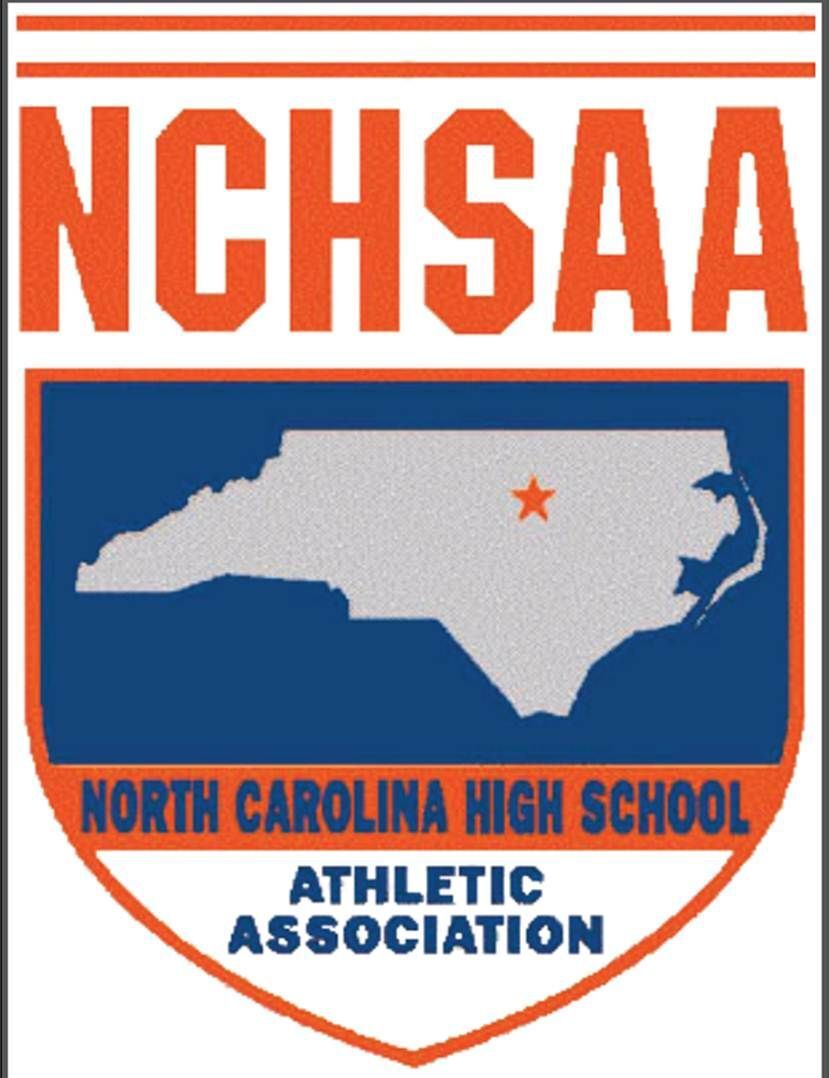 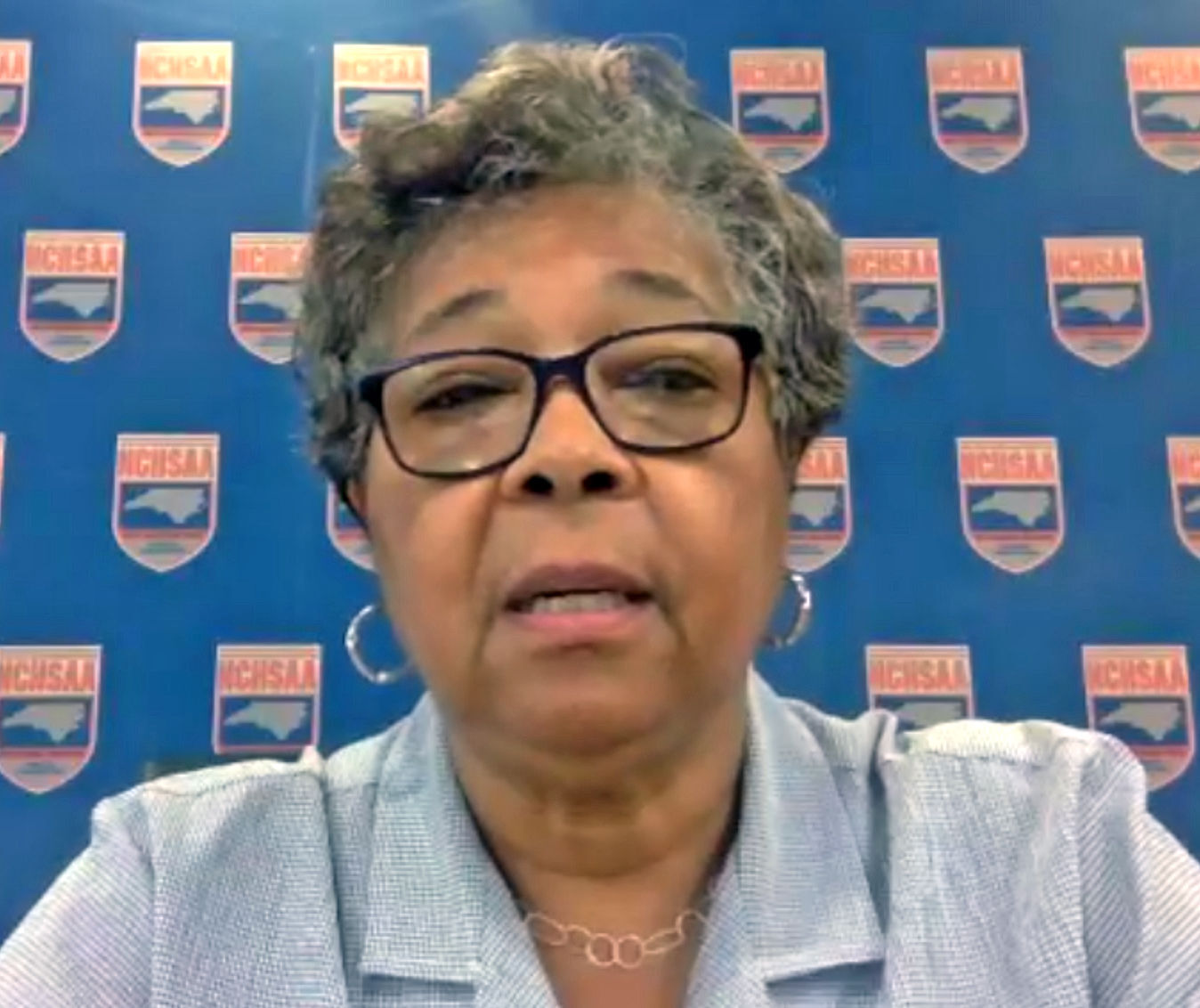 The NCHSAA announced a revised 2020-21 athletic calendar during an Aug. 12 briefing. Highlights of the calendar include at least four fall prep sports, including football, shifted to begin practice and competition during the spring semester.

This story has been modified from a previous version to add comments from cross-country coach Randy McDonough and football coach Ryan Habich.

CHAPEL HILL — The North Carolina High School Athletic Association has dramatically reworked the high school sports calendar in reaction to the COVID-19 pandemic, announcing that no practices for any sports will be held until Nov. 4, and high-contact sports such as football and wrestling will be moved to the spring.

“Last night the board of directors approved a framework we believe maximizes the opportunities for students in our membership to participate in athletics at some point during this school year, regardless of what plan is a school and/or school system operates,” NCHSAA Commissioner Que Tucker said in a statement on Wednesday, Aug. 12. “Please keep in mind that these proposed dates are dependent on COVID-19 conditions improving across N.C.”

According to Tucker, the calendar was a collaborative effort between NCHSAA staff, the board of directors and various committees, such as the city and county Athletic Directors, Sports Medicine Advisory Committee and the Sports Ad Hoc Committee.

“We recognize that this is a lot of information to digest and drastically different from the way the sport calendar has been aligned for years in North Carolina,” Tucker said. “However, as we mentioned many weeks ago, we will play again. In that mantra we believe, and it is in that spirit that we present this calendar. We believe that this is the best path forward to a safe return to the field.”

High school football programs will now have to wait more than five months before playing their first regular-season contest. The first football practice can be held Feb. 8, with the first competition date no earlier than Feb. 26.

In addition to football’s shift, the NCHSAA moved the boys soccer season to begin in January, with girls tennis and girls golf moved from fall to spring and wrestling pushed from November to beginning its season next April.

“Obviously we’d like to be playing in the fall. it’s not an ideal situation,” Watauga High football coach Ryan Habich said. “Under the current situation, you understand what they’re doing.

“I think some of our seniors were disappointed ... but I think the kids were excited that at least we have a plan,” Habich added.

Practices in the mountains in February could present a challenge, Habich said, but “we’ll have to adapt and deal with it.” WHS has worked with App State Athletics to use its indoor training facility in the past, but Habich expressed doubts about being able to use it consistently.

The team has held voluntary workouts in four groups since mid-June, when the NCHSAA allowed limited sports activities to resume with restrictions in place. Going forward, the team will hold voluntary skills development sessions on Tuesdays and Thursdays for those interested in playing football, Habich said.

Habich also noted that the NCHSAA recently lifted a restriction on using weight rooms, and that students will be able to use weight rooms in groups of no more than 10 at a time.

The earliest sports seasons to begin will be for cross-country and volleyball, which can begin practices Nov. 4 for seasons slated to end Jan. 8.

Watauga High cross-country coach Randy McDonough said he did not know about the new calendar until it was announced on Aug. 12, but “I am glad they are trying to do something.”

McDonough said he hoped conditions would be safer in time for the November start for cross-country, a sport he feels might not be as “low risk” as some people think.

He noted that NCHSAA guidelines have allowed for three cross-country practices a week (with groups in the morning and afternoon) since mid-June, and he said the team would likely continue with that schedule until November.

McDonough and St. Stephens coach Jason Fulbright work together to create the conference schedule each year, and they’ll be starting from scratch. Transportation and statewide gathering restrictions will play a factor.

McDonough felt sure that his runners would take the changes in stride.

“They’ll be ok just getting to do something,” he said. “They’re loving being with people, anything they can get out of this.”

Swimming will be the next season on the calendar, beginning in late November and running through January.

Basketball season has also been pushed back to begin in December. First games for basketball are generally played around the Thanksgiving holiday, but this year’s season will instead run from December through mid-February, with a total of 14 regular-season games. Boys soccer, in addition to boys and girls lacrosse, are scheduled to begin in January and end in mid-March.

Golf (boys and girls), boys tennis, girls soccer and softball will be played in March and April. Then the sports year will end with wrestling, baseball, track and field, and girls tennis playing from mid-April through mid-June. Indoor track has been eliminated for the 2020-21 season, McDonough noted.

“There is still much work to be done in regard to playoff formats, COVID-19-related rules modifications for numerous sports, securing potential playoff facilities and providing the safest possible regular season opportunities for student-athletes,” Tucker explained. “We are committed to that work and will continue to lead and govern interscholastic athletic programs across this state that support and enrich the educational experience provided by our member schools in such a manner to maintain the standards of excellence that the NCHSAA has become known for.”