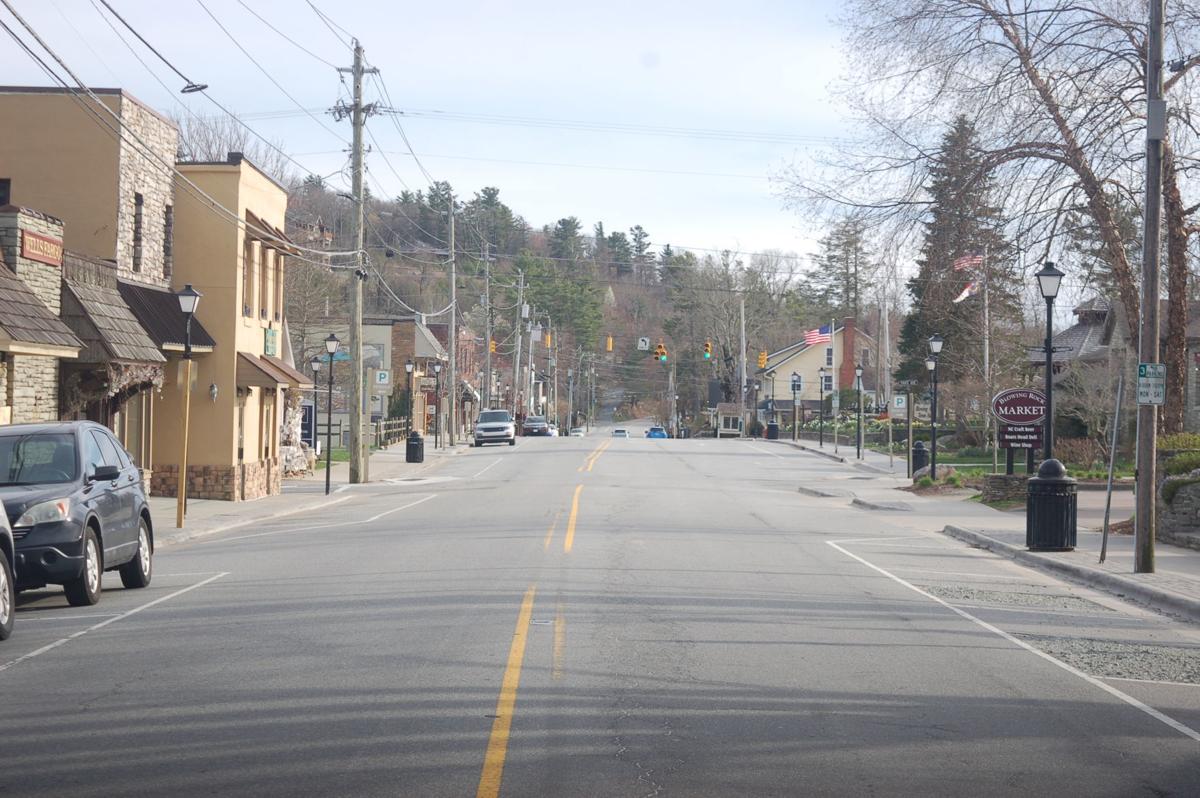 Downtown Blowing Rock as pictured at 5 p.m. on March 31. Usually on a nice spring day such as this, downtown Blowing Rock would be full of tourists and locals, but due to COVID-19 and the stay-at-home order mandated by Gov. Roy Cooper, the streets are empty. 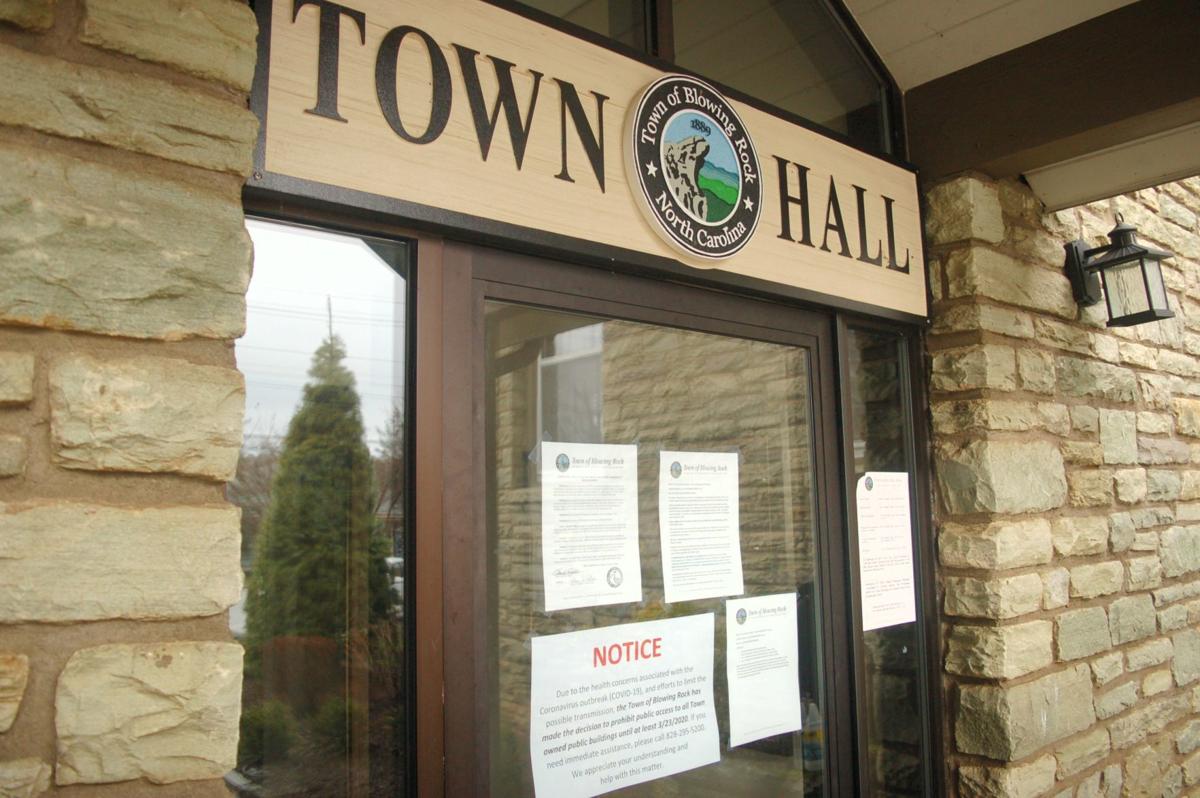 The front door of the Blowing Rock Town Hall was full of notices that it was closed to the public due to the 2019 novel coronavirus pandemic. 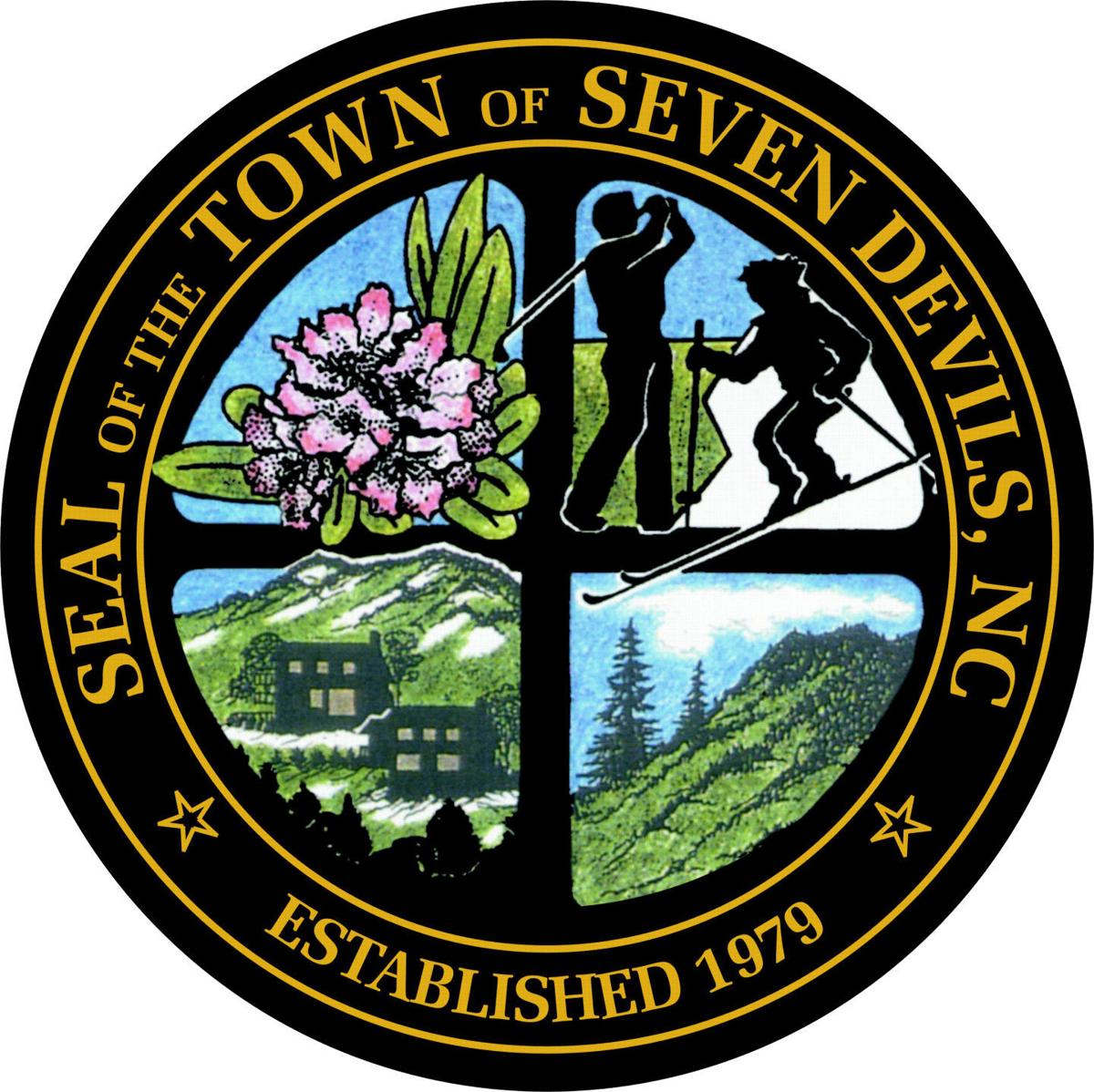 Downtown Blowing Rock as pictured at 5 p.m. on March 31. Usually on a nice spring day such as this, downtown Blowing Rock would be full of tourists and locals, but due to COVID-19 and the stay-at-home order mandated by Gov. Roy Cooper, the streets are empty.

The front door of the Blowing Rock Town Hall was full of notices that it was closed to the public due to the 2019 novel coronavirus pandemic.

HIGH COUNTRY — During a time when local townships and municipalities should be gearing up for population increases and the start of peak tourism season in the High Country, the COVID-19 pandemic and the stay-at-home order will impact both seasonal and regular residents across the area.

Executive Order 121, also known as the statewide stay-at-home order, was signed by Gov. Roy Cooper and went into effect on March 30, in an effort to limit the transmission of the COVID-19 virus.

Under a Watauga County order, all residents and non-residents of Watauga County arriving for overnight stays are ordered to self-quarantine for a period of 14 days or seven days after symptoms have resolved, whichever is longer, if arrival was preceded by an overnight stay outside the county.

With the peak of the visitor season, which spans from June until October, quickly approaching, tourism development authorities, such as the one in Blowing Rock, are addressing the long-term impacts the stay-at-home order could have on local businesses.

Blowing Rock earned $264 million in visitor spending in 2018, according to Tracy Brown, executive director of the town’s Tourism Development Authority, who noted that because of the tourism in Blowing Rock, “each resident sees nearly $400 in tax savings per year.”

Amanda Lugenbell, assistant director of the Blowing Rock Tourism Development Authority, says that the population in Blowing Rock multiplies by more than five times during peak visitor season. The town’s year-round population is about 1,300, while the population “surges to about 8,000 in the summer,” according to Lugenbell.

“Tourism is critical to Blowing Rock and has been for over 150 years. Tourism brings in hundreds of thousands of visitors per year that spend millions of dollars around our community,” Brown said. “Tourism is so important here because it’s the industry that we’re in as a town and region. Hospitality is what we do.”

Some seasonal visitors “are yearning to get back here” and some made the move before the stay-at-home order was issued, Brown said, adding that several seasonal residents have reached out to him to find out how they can support the mountain town from a distance.

“It’s very touching to know that these folks don’t just love their summer homes and friends at the club, but the people and businesses that make our town work. Our seasonal residents are opening their hearts and checkbooks to do what they can,” he said. “That says a great deal about what this community means to them. They need to know that we’re grateful for them and look forward to their return.”

Brown says that getting “back to normal” is going to take some time after the COVID-19 pandemic precautions and restrictions are lifted, similarly to the way it did during the 2008 recession.

“We’ve enjoyed 10 years of steady growth after the great recession, and now we’re going to be hitting the reset button. Things will be different. There will be a change in the landscape in that some businesses will not be able or willing to get through this,” Brown said.

Debbie Powers, town manager of Seven Devils, said that most seasonal part-time residents are “complying with the order, but are anxious to return to their summer homes.”

Powers noted that visitors are a driving force behind the town’s year-round economy because of the town’s rental properties, restaurants and its workforce, as there are “220 full-time residents.”

Seven Devils is home to approximately 1,500-1,700 during the peak tourism months, according to Powers.

David Jackson, president and CEO of the Boone Chamber of Commerce, said, “Summer or part-time residents are a very important part of our economy. Many of these folks are among the top donors to our nonprofit organizations and invest their support and volunteer hours to help any of our signature arts and cultural events that make our area come alive in the summer.”

As of 2018, Boone’s population was 19,562, and according to Jackson, that number increases by 30 percent when factoring in seasonal visitors and part-time residents.

In regard to enforcing statewide and county-mandated policies of social distancing, Jackson said that law enforcement offices “are doing the best they can to enforce these orders, but this is also not the only thing on their plates.”

“Citizens have been proactive in reporting behaviors they see and feel to be non-compliant to proper authorities. We also have to urge our summer residents, or any of us for that matter, not to be selfish at this time,” Jackson said. “There is no community in the country that wants to welcome visitors more than Boone, Blowing Rock and the High Country do, but now is not the time. If you are a property owner coming back to this area, there are rules that have been put in place for you to do so, but those rules require strict compliance to keep us all safe.”