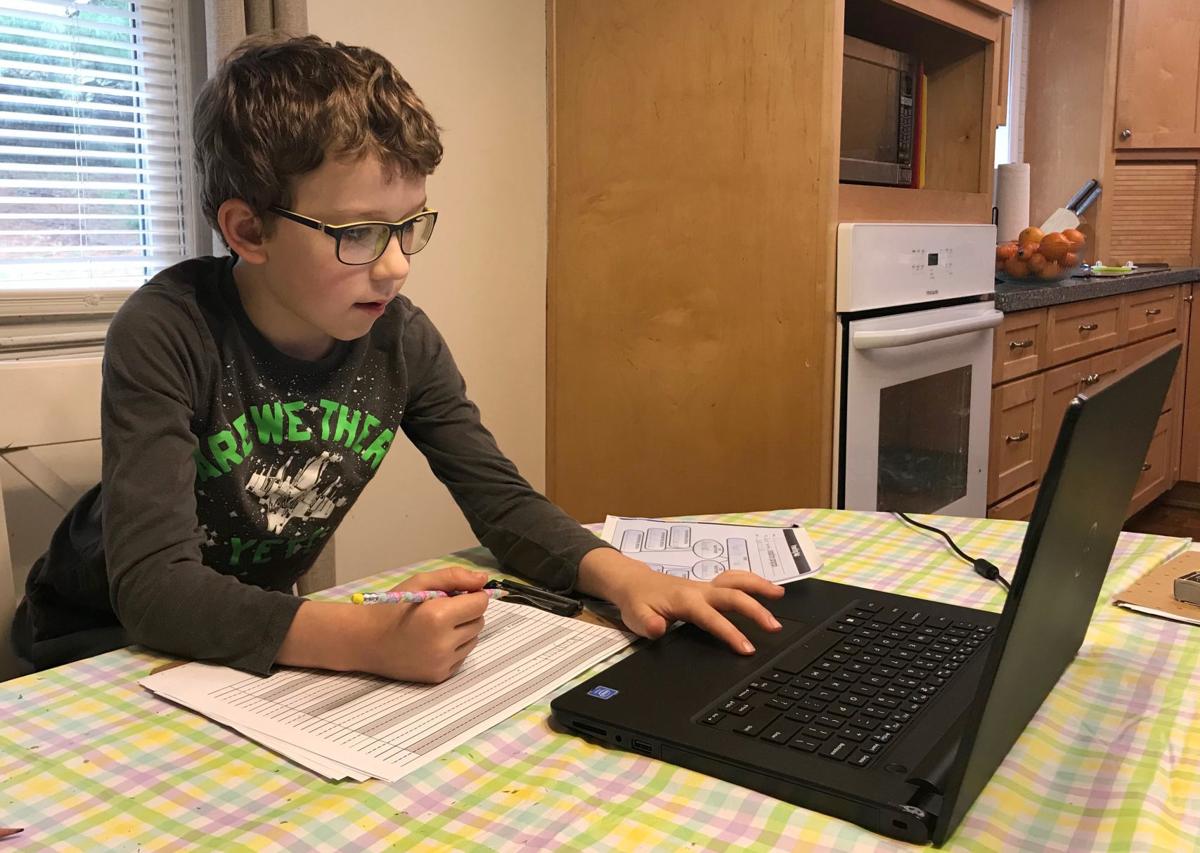 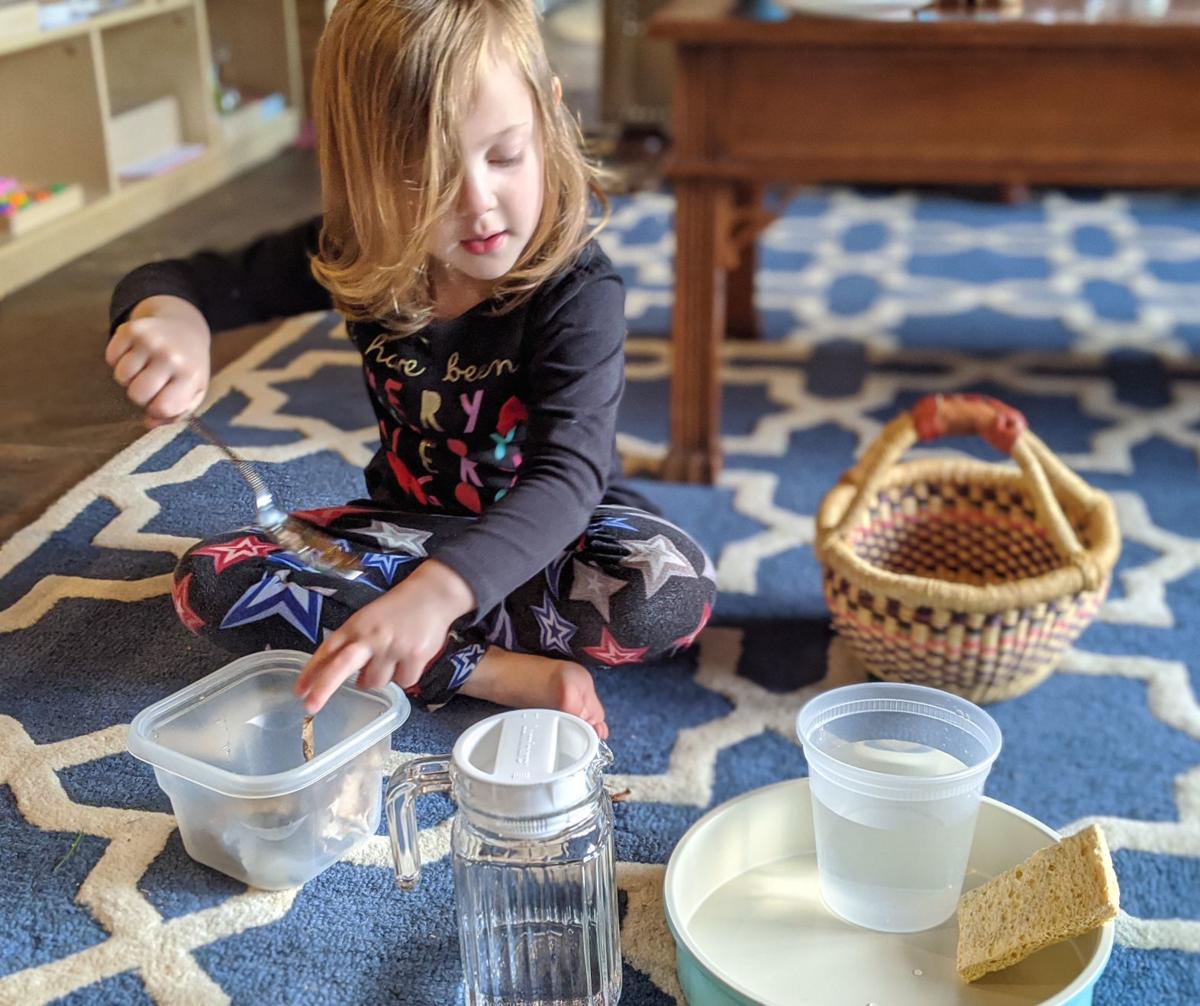 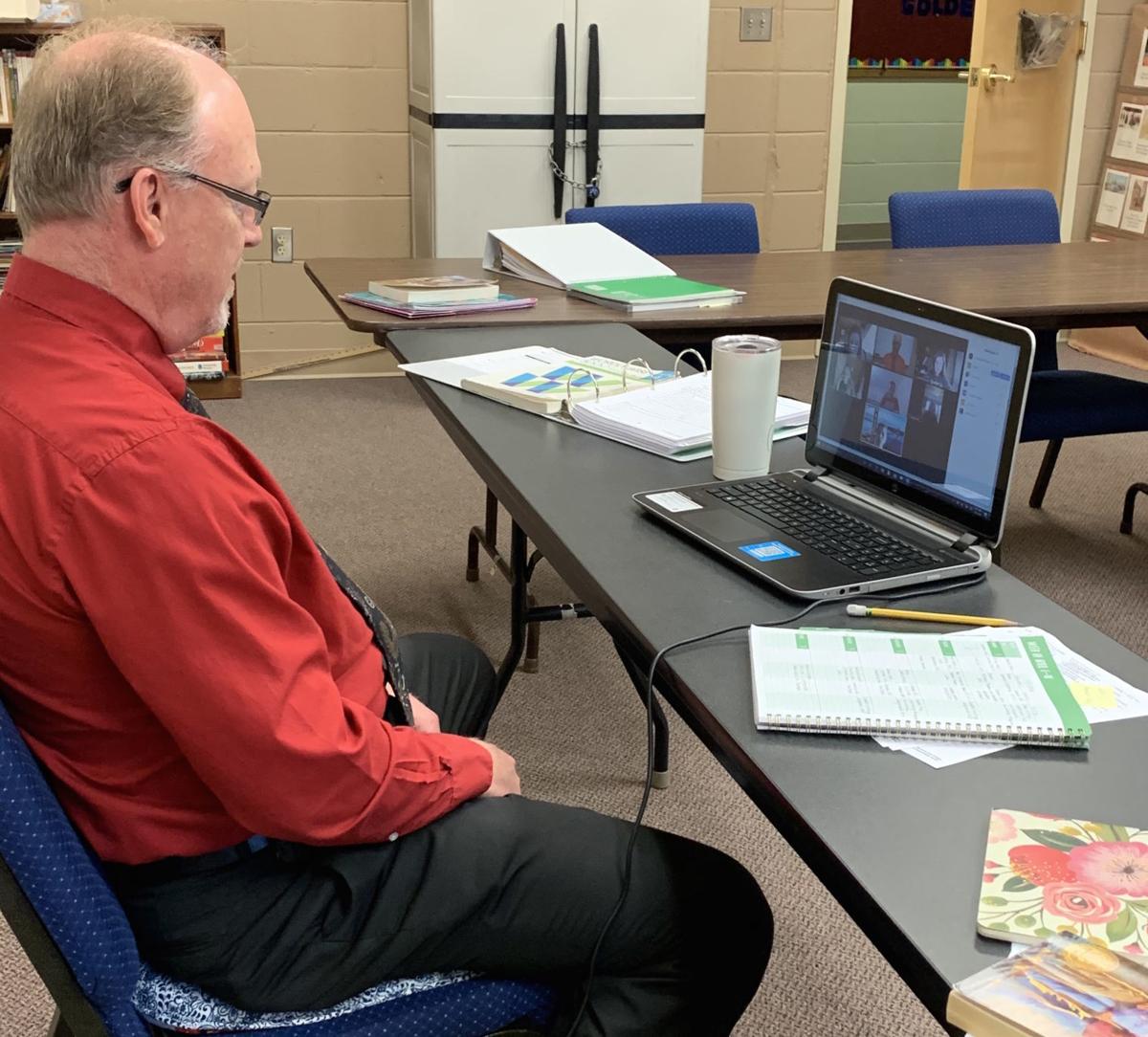 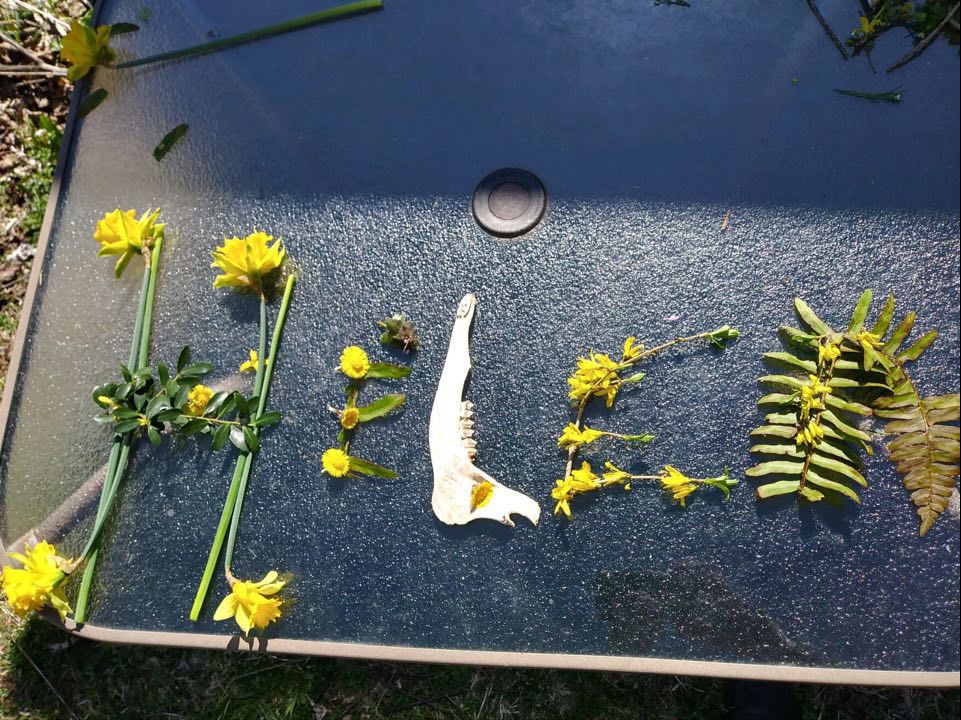 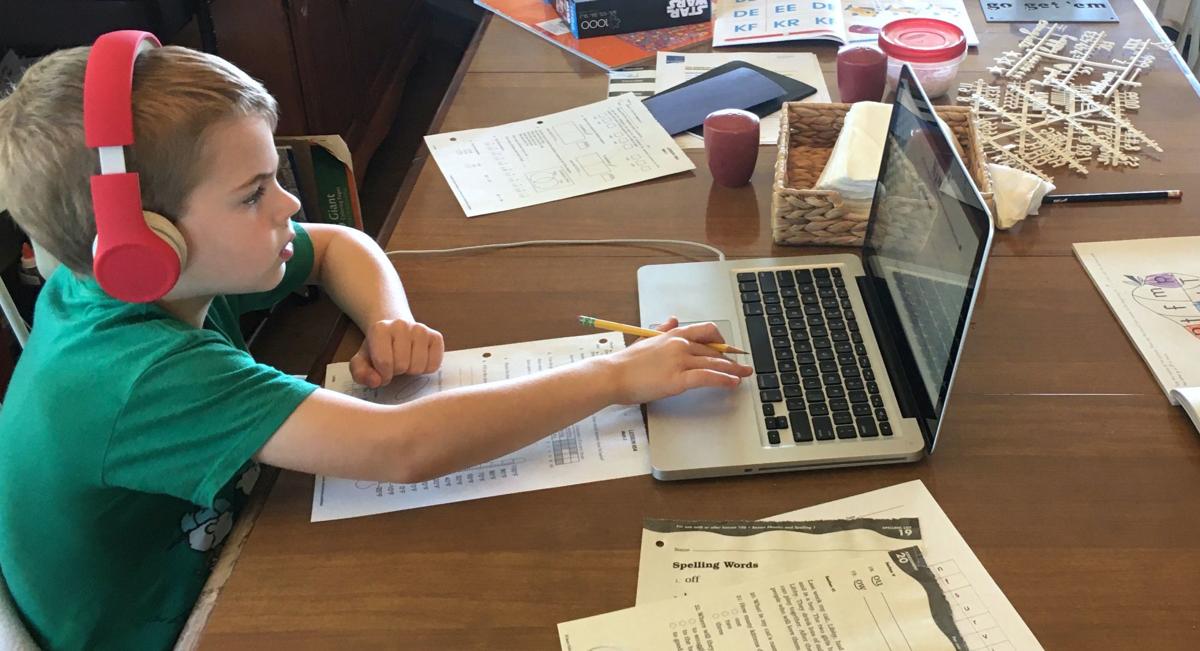 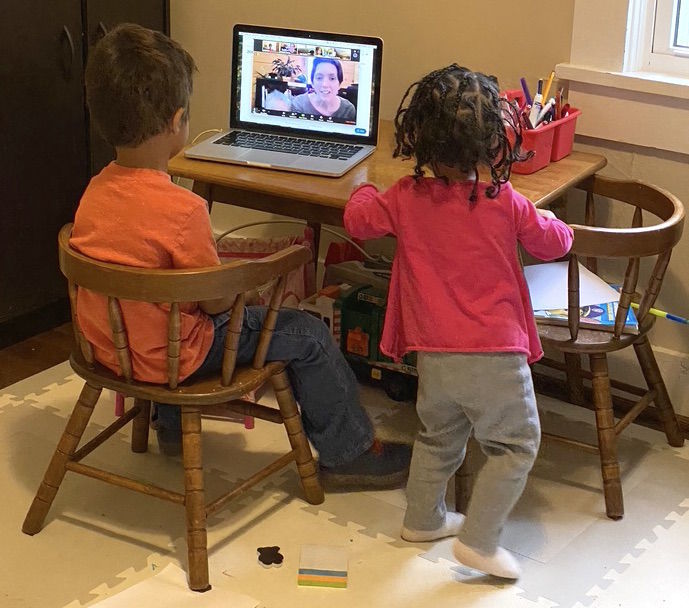 Bryson, a Two Rivers fourth-grader, learns about the purpose of feathers during remote learning.

Bryson, a Two Rivers fourth-grader, learns about the purpose of feathers during remote learning.

WATAUGA — Gov. Roy Cooper’s executive orders concerning the COVID-19 pandemic up to this point have given direction to public schools, but it leaves room for interpretation for the other forms of education in the state.

Watauga County is home to public, private and charter schools — each of which are conducting remote instruction for now and had different challenges with transitioning to virtual learning.

Grace Academy is a private Christian, classical and collaborative school that is based on the campus of the Boone United Methodist Church. As Cooper’s orders do not directly address private schools, Grace Academy Headmaster Roy Andrews said the school had the option to function normally.

However, Andrews said he felt the spirit of the order voiced that it would be in the best interest of the community for schools to not meet on campus. So Grace Academy chose to transition to virtual classrooms in mid-March with both virtual lessons from teachers in real time as well as pre-recorded videos.

Grace Academy wasn’t as prepared as the public schools to hand out electronic devices to students, though the school did loan some Chromebooks to some families. Andrews said most of the families the school serves — with 118 students — had devices on hand.

Operating with a collaborative model, Grace Academy views parents as co-educators. Typically, students meet with teachers on two days a week to go over the curriculum and do school work either at the school or at home the other three days. The transition to students learning at home wasn’t as difficult for Grace Academy students as it was for others.

“Our kids were used to working in the home classroom some,” Andrews said. “Our parents were pretty well equipped to help their students.”

To reach students and help relieve some of their stress, Andrews videoed himself giving them a talk as if he was their sports coach — as he once coached sports. The video featured him a gym in a coaches outfit, giving the students a pep talk during the mid-point of the school year or “half time” of the game.

As a Montessori school that focuses on hands-on learning for students, Mountain Pathways School is trying to find other ways to keep students engaged, said Director Lindsey Holderfield.

“Montessori is a very challenging thing to translate through a computer,” Holderfield said. “It has demanded huge amounts of creativity from our teaching staff.”

Holderfield said that, while not required to by the executive order, Mountain Pathways also started conducting remote learning in mid-March with the school’s 13 teachers and 56 students. Holderfield said Mountain Pathways staff want to be an “anchor point” for students during this time by providing comfort, consistency and emotional support while not adding too much pressure on parents.

Mountain Pathways staff have been creating packets of materials of paper with manipulative elements and sending them home to families once a week. Holderfield said it’s especially difficult to do tasks like worksheets with younger students, so teachers are conducting lessons a little differently. Holderfield provided the example of a pre-primary teacher who videoed herself making butter and then sent a recipe to families for them to do together.

Oransky mentioned that middle grade students are creating an art journal linked to science activities as part of a learning expedition. The art teacher has students study work by a nature artist, and then go outside to make sketches of what they observe.

“One of our fifth-grade students designed a three-mile run so that he could pass the homes of as many of his friends as possible and arranged for them to wave to him as he ran by,” Oransky said.

Charter schools are receiving the same guidance as other public schools, as the Office of Charter Schools is a part of the Department of Public Instruction, Oransky said. She receives regular updates with guidance and resources from the office, as well as support from the North Carolina Association for Charter Schools.

Holderfield said the global community of Montessori schools has been helpful in gathering resources and troubleshooting issues. As a member school of the Association of Christian Schools International, Grace Academy gathers resources such as access to webinars or town hall meetings to stay connected.

Grace Academy is not bound by any regulations with regard to how it functions by being a member of the ACSI though, Andrews said. The decision with how the school will operate when students traditionally return in the fall will be made by Andrews in consultation with the Grace Academy board of directors.

“Our intention is to be back on ground, full steam ahead in August,” Andrews said. “For us, we feel like the virtual classroom — though it’s a stop-gap measure — it’s not providing the level of service and quality of education that our parents are expecting.”

Andrews said if Cooper ordered public schools to not meet in-person in the fall, Grace Academy would work with its school’s families and would “probably test the waters” with remaining in-person as long as it was safe to do so. If private schools were mandated to comply at that point, Grace Academy would return to virtual classrooms, Andrews said.

Mountain Pathways has not made a decision yet on how it will operate in the fall, but has a tentative start date of Aug. 17. Holderfield said she is frequently communicating with other Montessori schools and other small private institutions for ideas, but the decision for Mountain Pathways will be made based on what is best for its own students. She added that she’s grateful for the support of the Mountain Pathways board of directors for being “unflinchingly supportive of the staff.”

“There’s so many unknowns and everything has changed so much from week to week that it’s very difficult to plan for the future,” Holderfield said. “We’re constantly running three or four different scenarios based on what might happen so that we can be ready to act regardless.”

Mountain Pathways officials were planned to soon meet to discuss enrollment as the school is continuing to receive applications, Holderfield said. Oransky said March and April is the enrollment period for Two Rivers, which has been difficult since school officials can’t provide tours or have prospective families on campus. Two Rivers still has spaces in classes open if people are interested, she said.

As a public school, Two Rivers will be required to follow any guidelines set forth by the state of North Carolina. In the coming week, Oransky said she’s convening a return-to-school committee to plan for various possibilities for how the beginning of the 2020-21 school year could look.

“One of the benefits to being is a small school is that we can be flexible and we will be building a lot of flexibility into our plans so that we can best meet the needs of our families,” Oransky said.