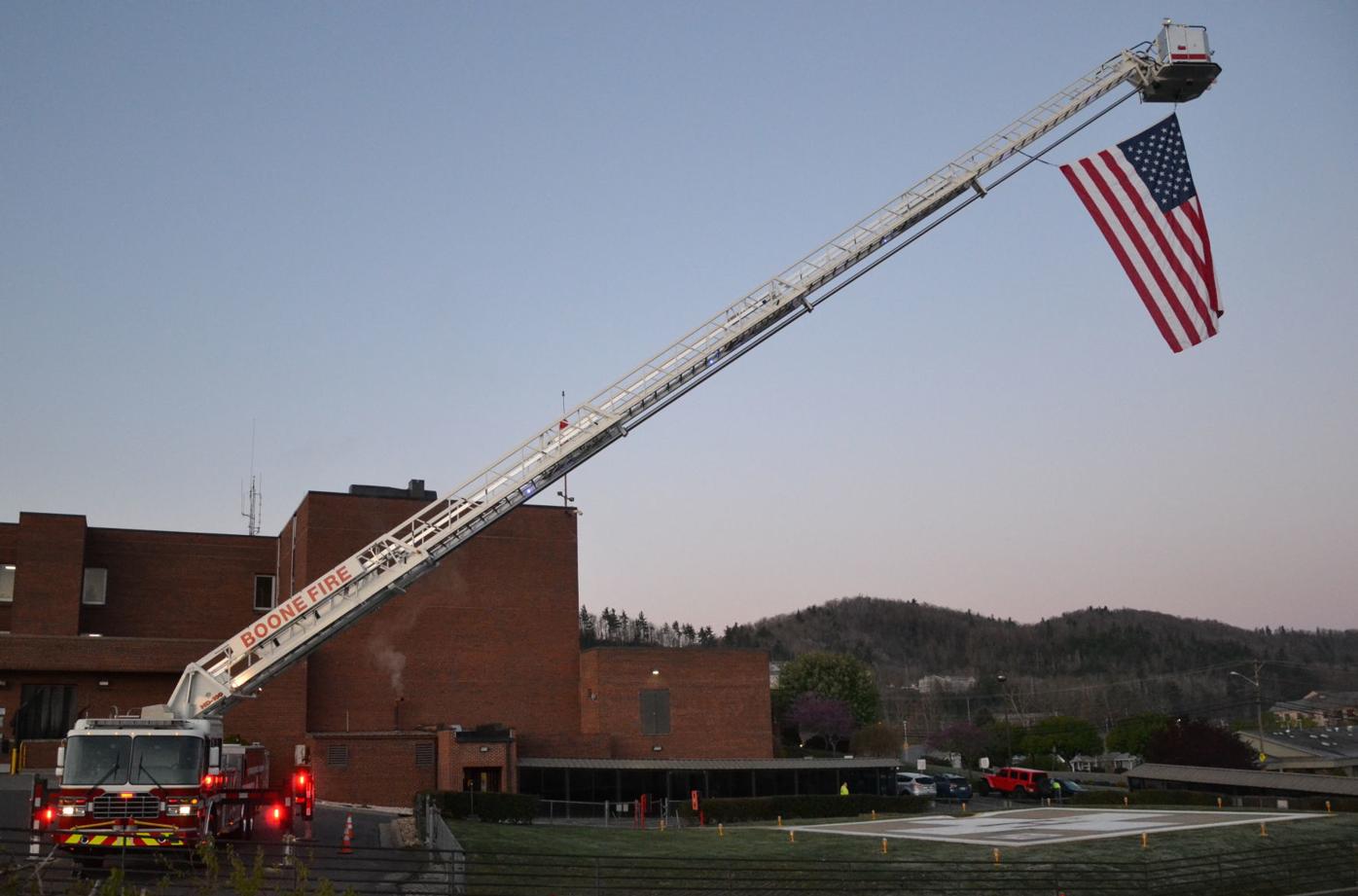 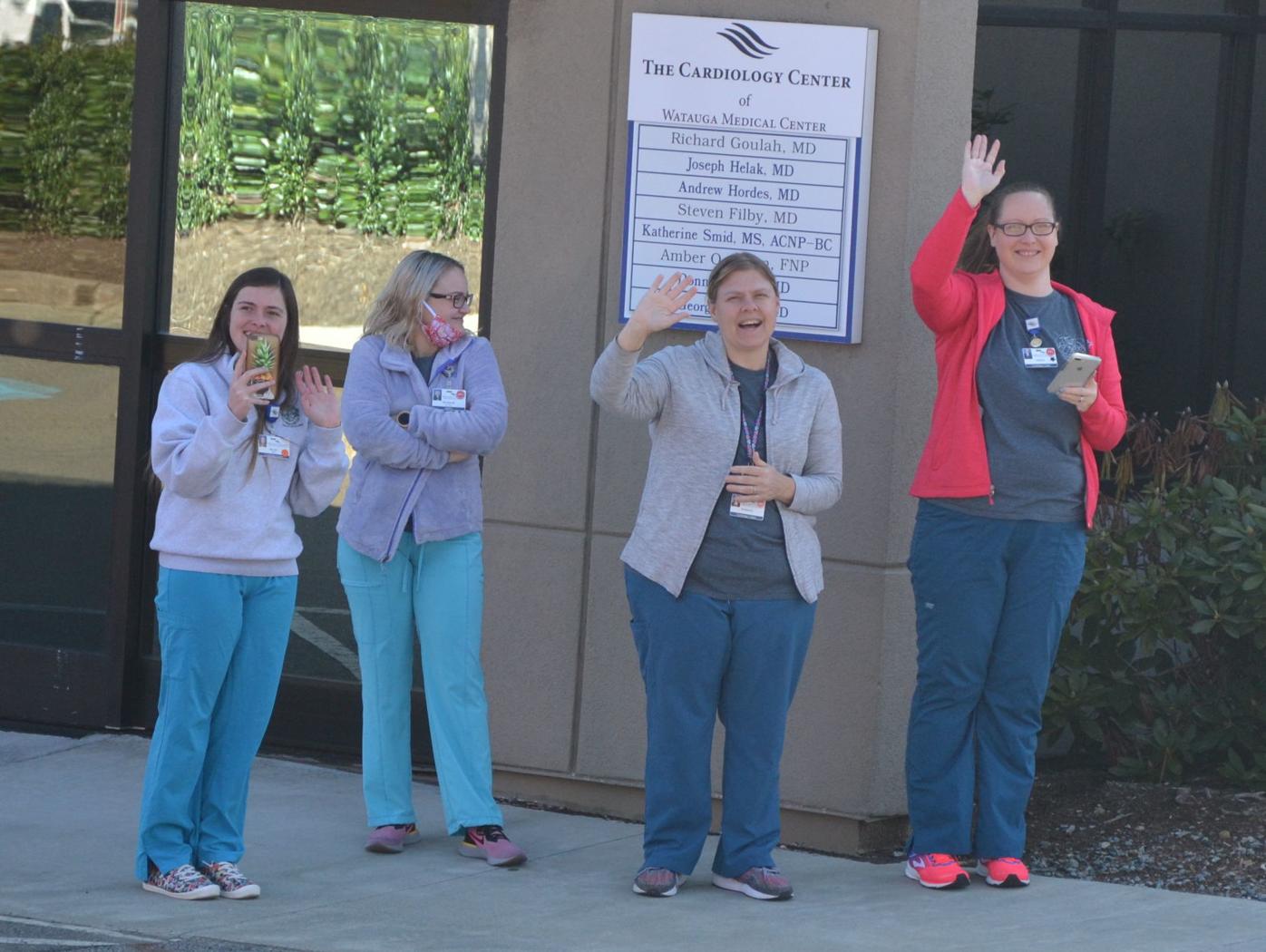 Hayley Behm, Savannah Duke, Kimberly Keys and Melissa Pruitt step out of the Cardiology Center to wave to the first responders driving by on April 17. 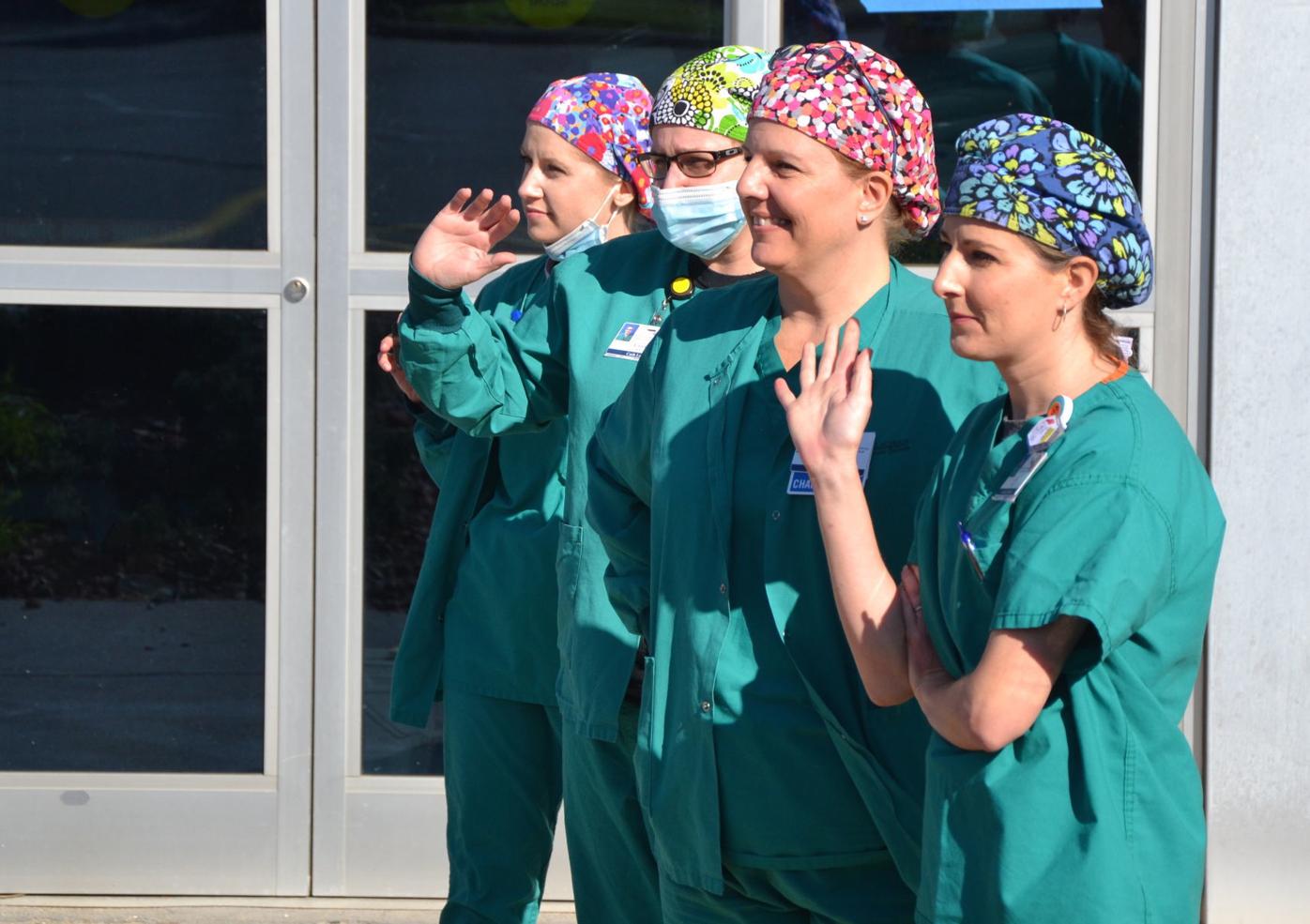 Front to back: Tai Church, Angel Gouge, Casey Kreuziger and Lois Pittman stand outside of the Watauga Medical Center during a first responder procession on April 17. 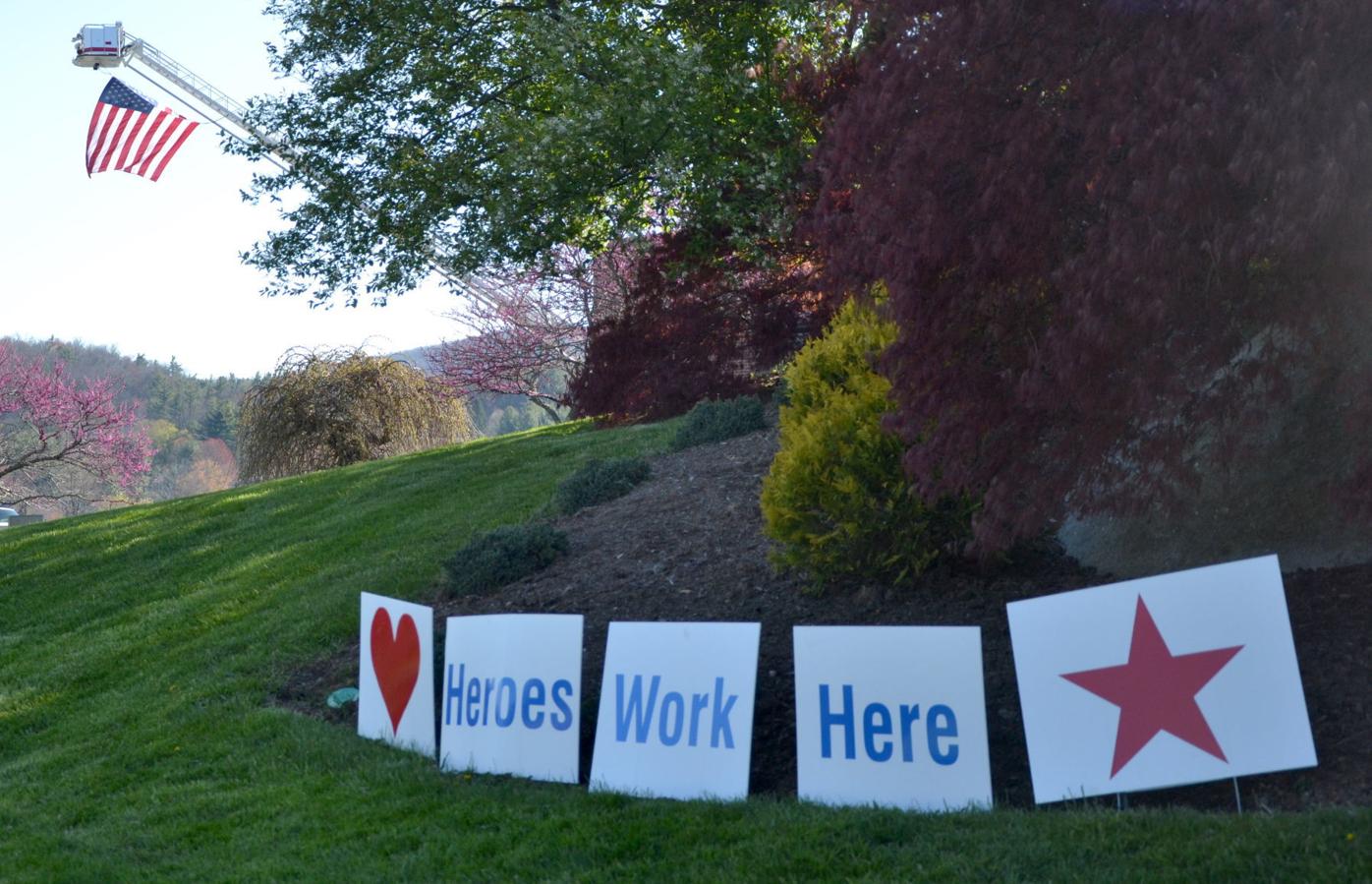 Signs that read “heroes work here” are placed outside of the Watauga Medical Center.

Hayley Behm, Savannah Duke, Kimberly Keys and Melissa Pruitt step out of the Cardiology Center to wave to the first responders driving by on April 17.

Front to back: Tai Church, Angel Gouge, Casey Kreuziger and Lois Pittman stand outside of the Watauga Medical Center during a first responder procession on April 17.

Signs that read “heroes work here” are placed outside of the Watauga Medical Center.

BOONE — Health care workers stood outside Watauga Medical Center on April 17 and waved in appreciation as first responders from approximately 12 agencies processioned around the building to show their support during this COVID-19 pandemic.

As the sun was rising that morning, ARHS employees were greeted with an American flag draped from a Boone Fire truck ladder. A few hours later, emergency service vehicles paraded around the Watauga Medical Center as hospital workers waved and patients could watch from their windows. Similar actions took place at Cannon Memorial Hospital in Avery.

“Watching our emergency responders drive by with their lights ablaze and their sirens sounding off was an emotional moment,” Mantooth said. “From the beginning of the virus our staff has done what needs to be done — without thinking about the emotional part of it. But today I saw many people with tears welled up in their eyes. The parade this morning was a point in time where they just let it out, which is something we really need to be able to do.”

Shawn Peele, chief of police at Appalachian Regional Healthcare System, helped to organize the effort by reaching out to local agencies last Wednesday. He said he had seen similar efforts done elsewhere, and said he knew several first responders in the area that had expressed interest.

Peele led the procession around the WMC. He said first responders were excited to be there and show their appreciation for the health care workers. He noted that one fire department displayed a banner that had a message portraying that “firemen need heroes too.”

As he was driving by the WMC workers, Peele said the staff had an emotional reaction that he didn’t expect. He mentioned that when he came into work that morning, health care workers were outside taking photos of the American flag displayed by Boone Fire and that it was a “tremendous morale boost” for staff.

“We’re all stressed. We all feel it,” Peele said. “Feeling the community come together is a sense of support. It’s good to see there’s people out there that understand what you’re going through, and that recharges you to go back to work.”

Hospital patients were able to see the process through the facility’s windows. While patients may not be directly affected by COVID-19, Peele said many of them are impacted because they aren’t able to have family and friends around. He hoped the procession and display by emergency agencies lifted the spirits of those patients who were able to watch.

While the procession was in honor of the work that has been done during the last few months to combat the virus, Mantooth said ARHS wants to honor the first responders as well as “they’ve been here with us from the start.” He said local crews have been part of every level of response to prepare for what may happen next.

“We are in this together,” Mantooth said. “It’s not just Cannon Memorial Hospital and Watauga Medical Center, it’s all of ARHS, the fire departments, the police departments, emergency services and the community. Seeing the support from the public and the faces of the people who are putting themselves on the front lines, risking their lives for other people — all of it really hits home.”