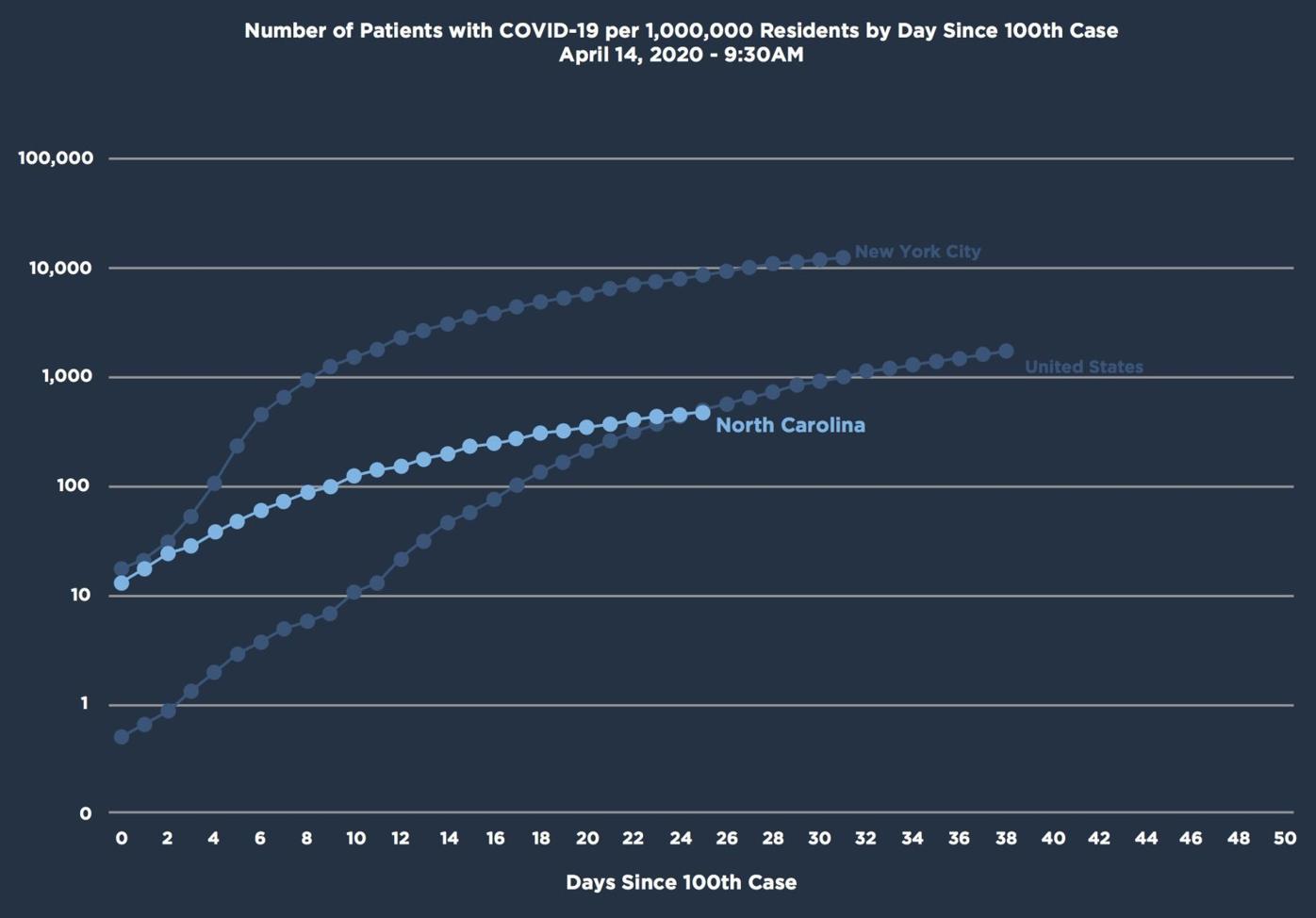 A graph included in a governor’s office presentation depicts the trajectory of new cases reported by day since the 100th case in New York City, the United States and North Carolina. 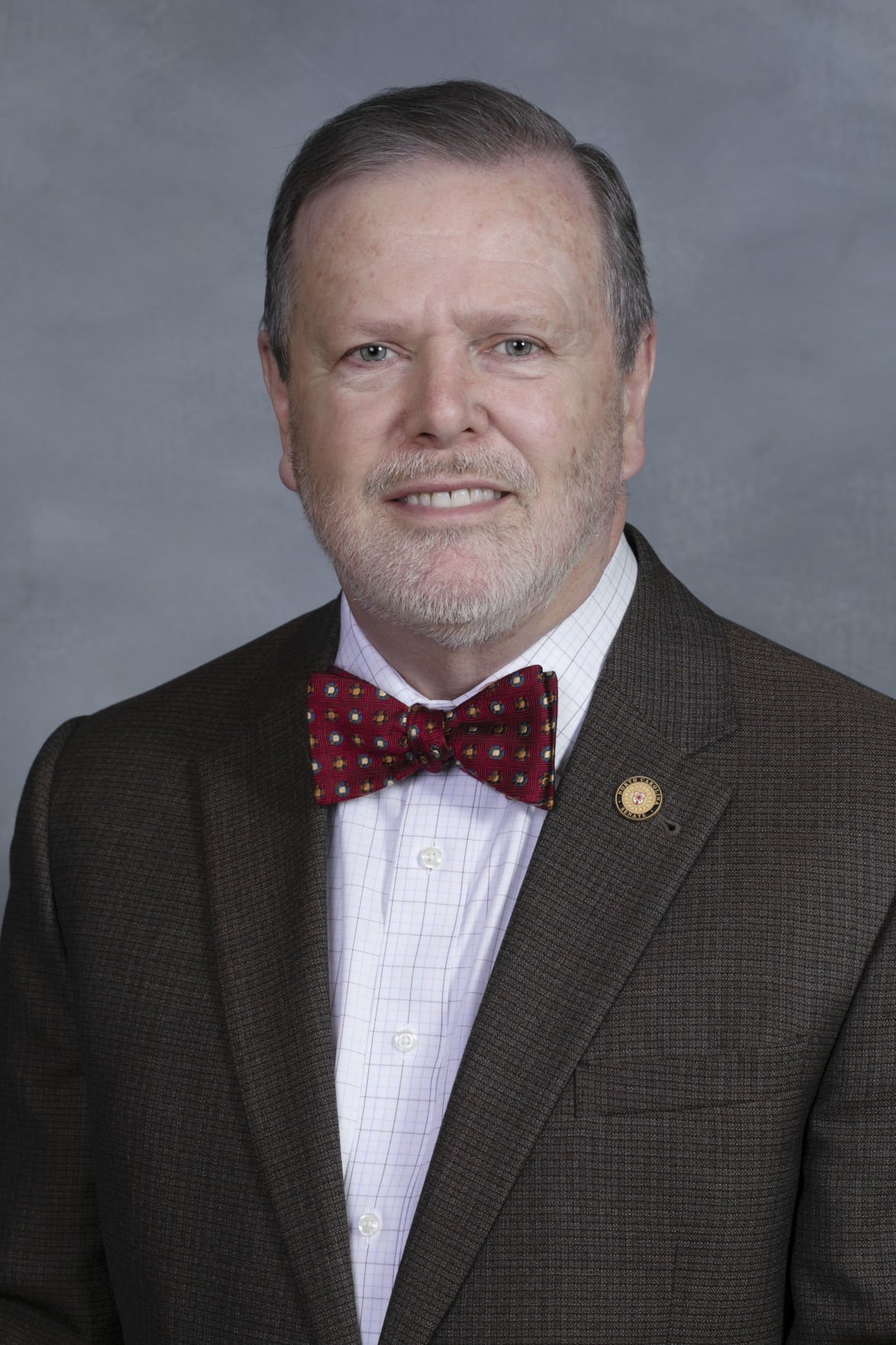 RALEIGH — The science of tracking the novel coronavirus’ spread took on a political tinge Wednesday with Senate Leader Phil Berger (R-Eden) participating in the rollout of a research study to track people who may have already had COVID-19 without knowing it.

Berger announced earlier this week that $100,000 in discretionary funding from the North Carolina General Assembly is going to help start a study tracking symptoms and blood samples from patients at Charlotte’s Atrium Health and Winston-Salem’s Wake Forest Baptist Health who volunteer to be part of the research.

In a telephone press conference on April 15, Berger touted the new study as “a worthy investment, just to get the data to help inform decisions.”

He also told reporters that N.C. Department of Health and Human Services Secretary Mandy Cohen had been “resistant to prioritizing sample testing.”

“We made the decision that because of ongoing resistance that we would continue to look for partnerships that could provide us with that type of testing, and that type of data,” Berger said.

Later in the day, Cohen pushed back during an afternoon press conference saying that she was unaware of the Wake Forest Baptist study until she learned of it Tuesday. It was then that scientists affiliated with NCDHHS reached out.

Cohen has been adamant that the state use its limited capacity for testing current COVID-19 patients strategically, prioritizing those arriving at health care facilities with symptoms.

“Personal protective equipment, the gowns, the masks, the gloves continue to be a limiting factor,” Cohen said. “Those shortages of protective equipment, those gowns and masks, mean we must be judicious in how we use these resources and that also means that has to be available for our health care workers who care for those with COVID-19.”

But the back and forth portends a larger political battle that’s looming over lifting the strict social distancing measures that have kept North Carolinians hunkered down in their homes for more than a month.

Wake Forest Baptist Health physician and researcher John Sanders is leading the study that’s got Berger’s backing. Sanders told reporters during the morning call that the study will focus on identifying those who may have had COVID-19 in the past and who now have antibodies against the disease.

Antibody testing is one part of determining the population’s exposure to COVID-19. People who have been exposed make antibodies to the virus, but there’s still some question whether those antibodies confer long-term immunity to the disease. Nonetheless, they’re a significant marker to help scientists know how many people have been exposed to a disease that some estimate may not cause any symptoms at all in some people.

The COVID-19 Community Research Partnership will send at least a thousand patients home test kits, which are similar to a home pregnancy test.

“A plastic kit to put a sample on, in this case, a drop of blood,” Sanders said. “In a few minutes you get a few lines that tell you whether you’ve got antibodies, or not.”

The sample of people will not be representative of the greater population, something Sanders acknowledged is a weakness of the study because the sample population will not be completely random.

The federal Food and Drug Administration has yet to approve these home test kits, made by a company called Scanwell, which only has approval for use in a research setting, or any other test kits. Just this week, the agency said it was working with developers of such tests to allow for emergency authorization of the tests.

The agency also raised concerns “including whether the lay user can safely and properly collect the specimen, whether the components of the specimen transport media are safe for use in the home environment (since some may be toxic), proper shipment and adequate stability of the specimen given the time lapse between collection and testing and the potential impact of shipping conditions (such as, if the specimen sits in a hot truck).”

So, part of the study will be helping Scanwell validate its testing apparatus.

That will be done by sending another test, where subjects will prick their fingers to draw a microsample of blood that will be sent to researchers for an in-lab antibody analysis.

Finally, all of the data will be gathered on a database created by the database company Oracle, which will also create a portal for patients to enter their own symptoms, such as fever, cough, shortness of breath, and contacts with patients who turn up positive for the virus.

The samples will be linked to patients’ electronic medical records and will be put up against the blood sampling kit to compare to the results patients get from the home test with what researchers are seeing in the community.

Sanders called the General Assembly money a “kickstarter.” He’s also in talks with the National Institutes of Health and the Centers for Disease Control and Prevention for further funding, which he estimated could be in the tens of millions of dollars when the study gets up to scale.

The Wake Forest-led study comes at a time when there’s an increased call for relaxation of the strict social distancing rules that Gov. Roy Cooper and governors around the country have enacted to slow the spread of COVID-19. In recent weeks, Berger’s office has released several documents calling for more testing to drive decision-making around the economy.

“Without clearer data-driven evidence to support the continued economic shutdown, fewer and fewer people will comply with government orders over time. If the situation is as bad or worse than projected, then this data will instill confidence in government decisions and increase compliance, which would be necessary for an effective public health strategy,” said an April 13 release published on Medium.

“If the data shows the situation is better than projected, then we can have confidence that unwinding the economic shutdown can be done safely,” the release says.

But Cooper and Cohen pushed back against Berger later in the day. When asked about the Berger-backed study during the daily briefing on COVID-19, Cohen said there’s a lot of research ongoing with scientists who are collaborating with the N.C. Department of Health and Human Services.

“I want to make sure that we’re using our underlying infrastructure that our state has invested in over a number of years to do surveillance for disease and how we can leverage that going forward,” she said. “Coordination and data sharing is always going to be important here because there are going to be different kinds of research that are needed to understand different facets of the virus.”

She said that she also wanted antibody testing for COVID, along with a reliable test for seeing who has the disease now.

“I think all of these pieces are important in order to paint a picture. I think we are going to have this picture evolve over many weeks and months that will help us tailor our decisions,” she said. “We’re working with partners at UNC and Duke with a different type of methodology.

“It’s important that we need to come together in a coordinated look at the virus across our state.”

Later in the day, Cooper’s office released a document outlining his three-pronged plan for making the fraught decisions around undoing social distancing restrictions. One concern is that lifting restrictions will result in a spike of illnesses that overwhelm hospitals, leading to more deaths.

This article first appeared on North Carolina Health News and is republished here under a Creative Commons license.