RALEIGH — Gov. Roy Cooper on Saturday announced an executive order closing public schools for students for at least two weeks beginning March 16 in an effort to limit the spread of COVID-19.

"I do not make this decision lightly," Cooper stated on March 14. "We know that it will be difficult on many parents and students. These measures will hurt people whose incomes are affected by the prohibition of mass gatherings, particularly the people who are paid by the hour. These measures will also be tough on working parents and children who get their meals at school. 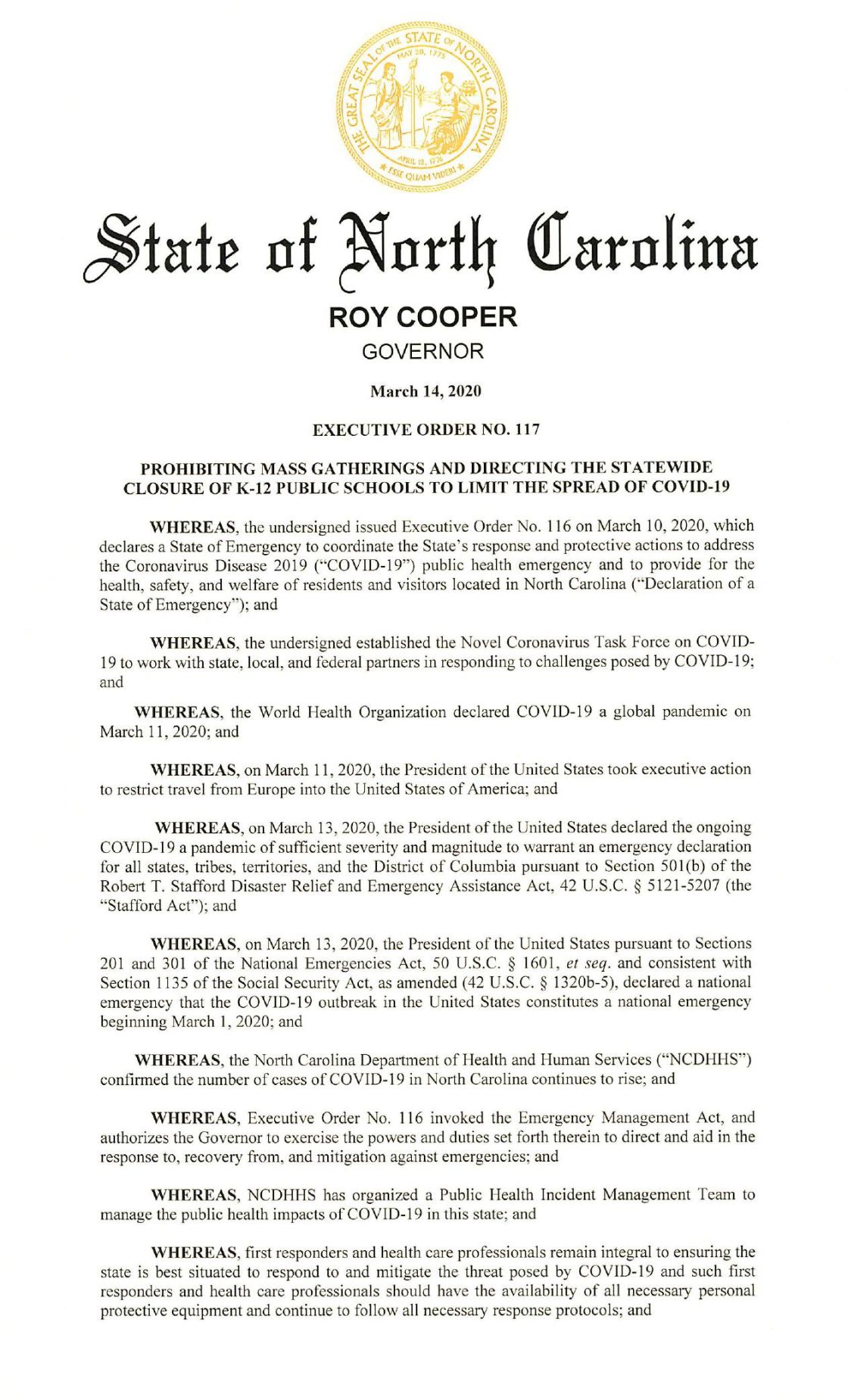 "We are working on efforts to deal with these challenges, from changes to unemployment insurance to special funding from the state and federal government to help get us through this."

Cooper said that he is putting together an education task force to help meet the needs that schools closings will create, such as child nutrition.

"We and the (education task force) are working on distance learning (and) using school buses to deliver meals to students," N.C. Superintendent of Public Instruction Mark Johnson said at the March 14 press event.

The order states that schools will be closed until Monday, March 30, "unless extended beyond that date."

Cooper’s order also mandates the cancellation of events of 100 people or more, because Cooper said venues were not heeding guidance given earlier.

"A mass gathering is defined as any event or convening that brings together more than 100 persons in a single room or single space at the same time, such as an auditorium, stadium, arena, large conference room, meeting hall, theater, or any other confined indoor or outdoor space," the order stated. "This includes parades, fairs and festivals."

The order clarified that the ban on mass gatherings does not apply to normal operations at airports, bus and train stations, medical facilities, libraries, shopping malls or centers, office environments, factories, grocery stores,  restaurants or other retail establishments.

The order is in effect for 30 days or until rescinded or superseded by another applicable executive order.

“School Superintendent Scott Elliott will issue further guidance prior to Monday about expectations for staff and access to school facilities for students. An opportunity will be made for students and staff to access the school buildings in order to collect personal items and resources. Additional information will be sent to school staff via email by Sunday evening."

N.C. Department of Health and Human Services Secretary Mandy Cohen said at the March 14 press event that there's been no community spread of COVID-19 in the state.

"Between the state lab and LabCorp, we've done well over 500 tests at this point and the number of tests being done continues to accelerate," Cohen said on March 14.

As of March 14, there have been 23 positive cases of COVID-19 in North Carolina in 12 counties.

Additional guidance and information from Watauga County Schools will be posted at wataugaschools.org/coronavirus.

State House Speaker Tim Moore (R-Cleveland) said the state General Assembly is prepared to support school districts with flexibility and funding they may need due to the closures.

“While I know this is a decision no one wanted to make, under the circumstances this is the right thing to do for North Carolina at this time,” Moore said Saturday.

“I hear from medical providers that their biggest need if schools close is child care support for health care professionals, so I ask North Carolinians to pull together and support those families who serve on the front lines of this emergency.”

“School systems and students can rest assured the state legislature will work closely with education officials to provide the flexibility and funding they need to respond to these rapid developments and keep North Carolina communities safe.”

BEECH MOUNTAIN — Following an executive order by N.C. Gov. Roy Cooper on March 14 banning gatherings of 100 people or more across the state, "…