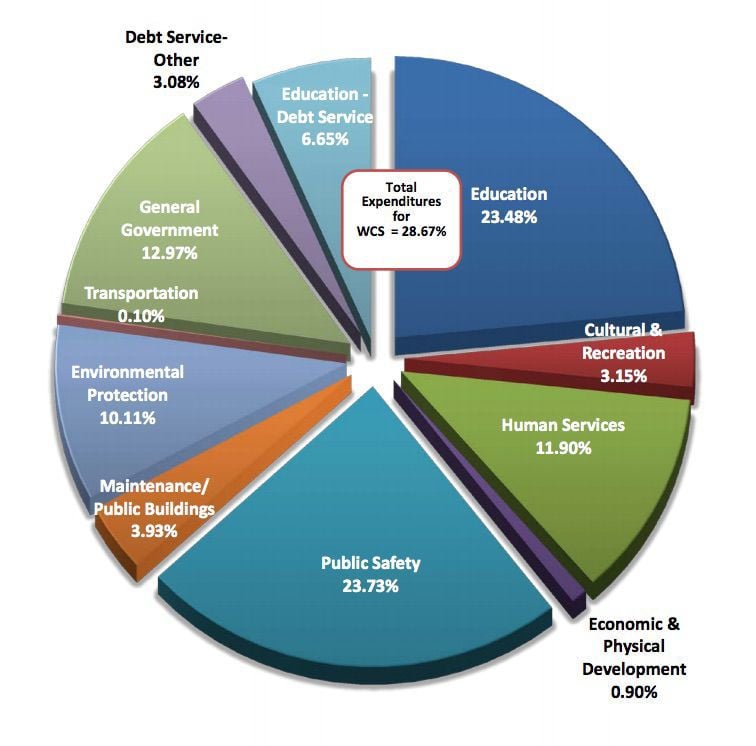 This graph depicts Watauga County’s expenditures in the 2020-21 recommended budget. 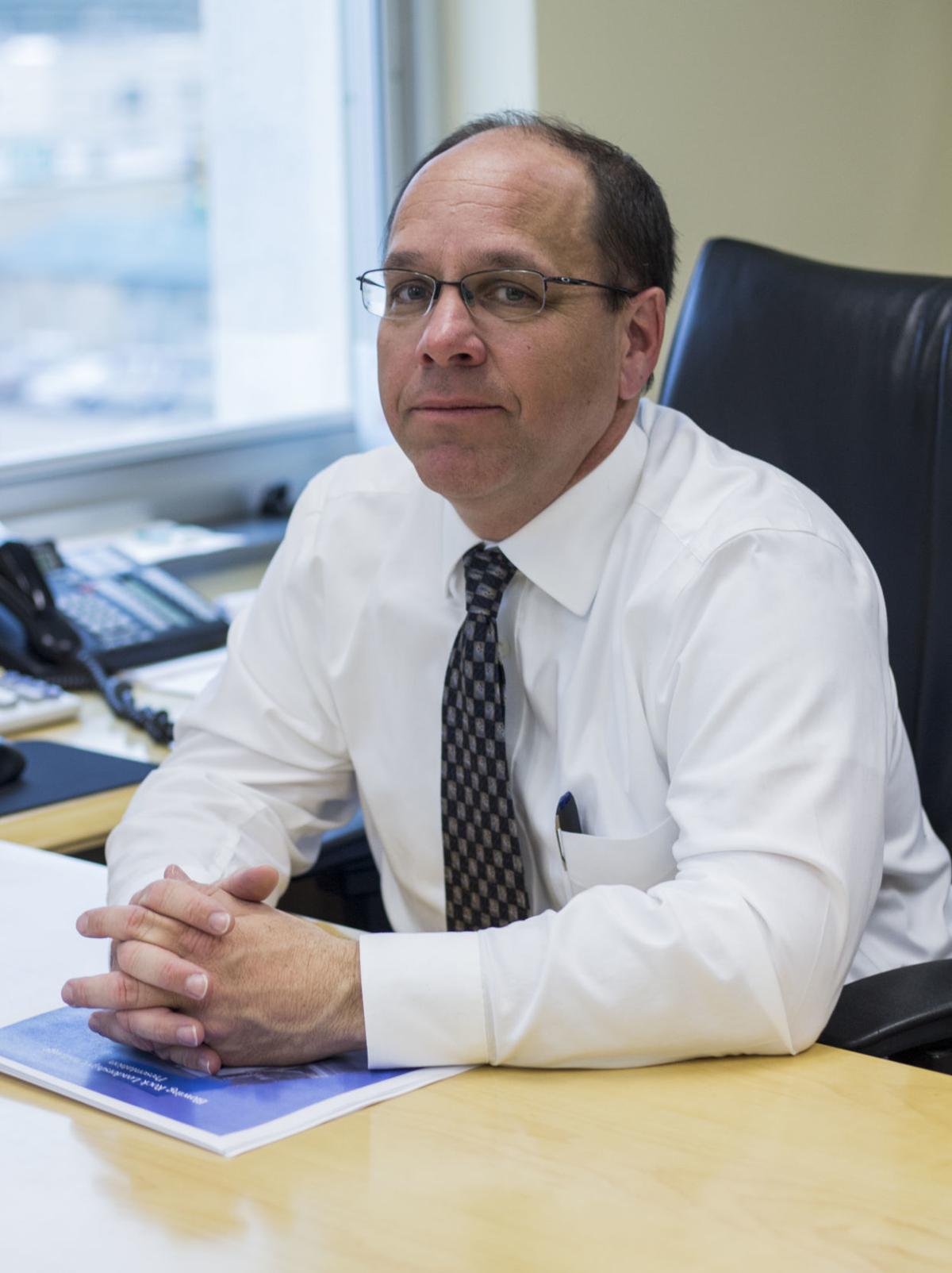 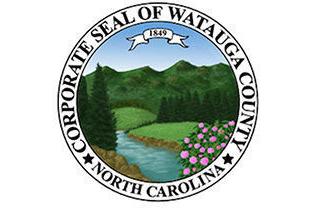 This graph depicts Watauga County’s expenditures in the 2020-21 recommended budget.

BOONE — County staff are recommending roughly a $7 million decrease in Watauga County’s budget for fiscal year 2020-21 in anticipation of impacts from COVID-19.

In a message in the 2020-21 budget proposal, County Manager Deron Geouque stated that this was the most “challenging budget year in my 19 years of service to the county.” The Watauga County Board of Commissioners will discuss the recommended budget during its two-day budget session on May 14-15.

During the commissioners’ April 5 virtual meeting, Geouque said county staff expect sales tax revenue to “take a substantial hit due to the closures.”

Local sales tax revenue is projected to experience a 24 percent decline from the previous fiscal year budget. Sales taxes provide 17.6 percent of the county’s general fund revenue, according to information provided by the county. The property tax rate is recommended to be maintained at the current level of 40.3 cents per $100 valuation.

“It’s difficult for us to project what our potential losses might be,” Geouque said. “We’re trying to prepare the best we can and come up with the best figures and estimates that we can provide to you at this time.”

These requests include a $500,000 allocation to Watauga County Schools to set aside for future long-term school capital needs; $728,000 for emergency communications; and $50,000 given to both Caldwell Community College and Technical Institute and the Economic Development Commission. The CIP also includes $1 million for future maintenance and repairs, which Geouque said would be used for roofing needs of county buildings.

The county is not recommending a cost of living adjustment for employees in 2020-21, according to the recommended budget.

Of the seven new county positions requested, the county’s recommended budget suggesting funding three of them — two part-time custodians at the new Community Recreation Center and one full-time nurse for Project on Aging. Funding for other staff employed at the rec center was budgeted in the current fiscal year, according to Finance Director Misty Watson.

Of the 28 staff reclassification requests, 17 are recommended to be funded — 12 of which have met the level II requirements per county policy, according to the county.

As previously discussed at the commissioners’ February budget retreat, the county still suggests funding the third year of a recovery plan for AppHealthCare. Starting in 2018-19, Watauga set up a three-year plan to aid the regional health department — serving Watauga, Ashe and Alleghany counties — as the agency was operating from its fund balance to cover expenses.

The 2020-21 allotment to AppHealthCare would complete the final phase of the three-year funding increases from the county. But Geouque warned it may not be the end of the county’s increasing contributions since the agency will be hit hard financially from COVID-19.

“It’s going to be incumbent upon Watauga, Alleghany and Ashe to step up to the plate and provide the funding that they need,” Geouque said. “The health department is stretched very thin right now with everything that’s going on. The health department will need substantial funding for the next couple years to continue down the road.”

The recommended budget would also not include any appropriations from the county’s fund balance, according to Geouque.

The May 14-15 budget session is scheduled to take place via a Zoom call, but some commissioners suggested meeting in person while following social distancing guidelines. No consensus on the budget session’s format had been reached by the end of the board’s open meeting on May 5.

The board opened the May 5 meeting with a public hearing about the proposed allocation of $100,000 from the Watauga Economic Development Commission for the Reenergize Watauga Fund. The fund — with a goal of reaching $400,000 with funding from other organizations — will provide relief in the form of an emergency small business loan program for local businesses in partnership with Mountain BizWorks.

No one signed up for public comment on the matter, and the commissioners approved the allocation. The agreement states that Mountain BizWorks will work to establish the funds within a week of approval from the county. However, Planning and Inspections Director Joe Furman said the timeline of the fund could be affected by a recent allocation from the N.C. General Assembly to the Golden LEAF Foundation for a similar relief program.

Loans from the Reenergize Watauga Fund can be allotted in amounts of a minimum of $2,500 up to a maximum of $10,000. The loans are able to be used for uses including payroll, accounts payable, fixed debts or other bills the business is unable to pay due to COVID impact, according to the loan program agreement. Funds can’t be used to refinance existing debt.

Businesses accepting loans will enter into an initial six-month period with no payments of any kind. Interest accrues at 4 percent during that six-month period but is not paid and rolls up into the loan at the end of the period, according to the agreement. After the initial six months, businesses will go into a second phase of three years with any principal that has not refinanced with disaster loans; the principal and interest payments will be at 5.5 percent interest, the agreement states.