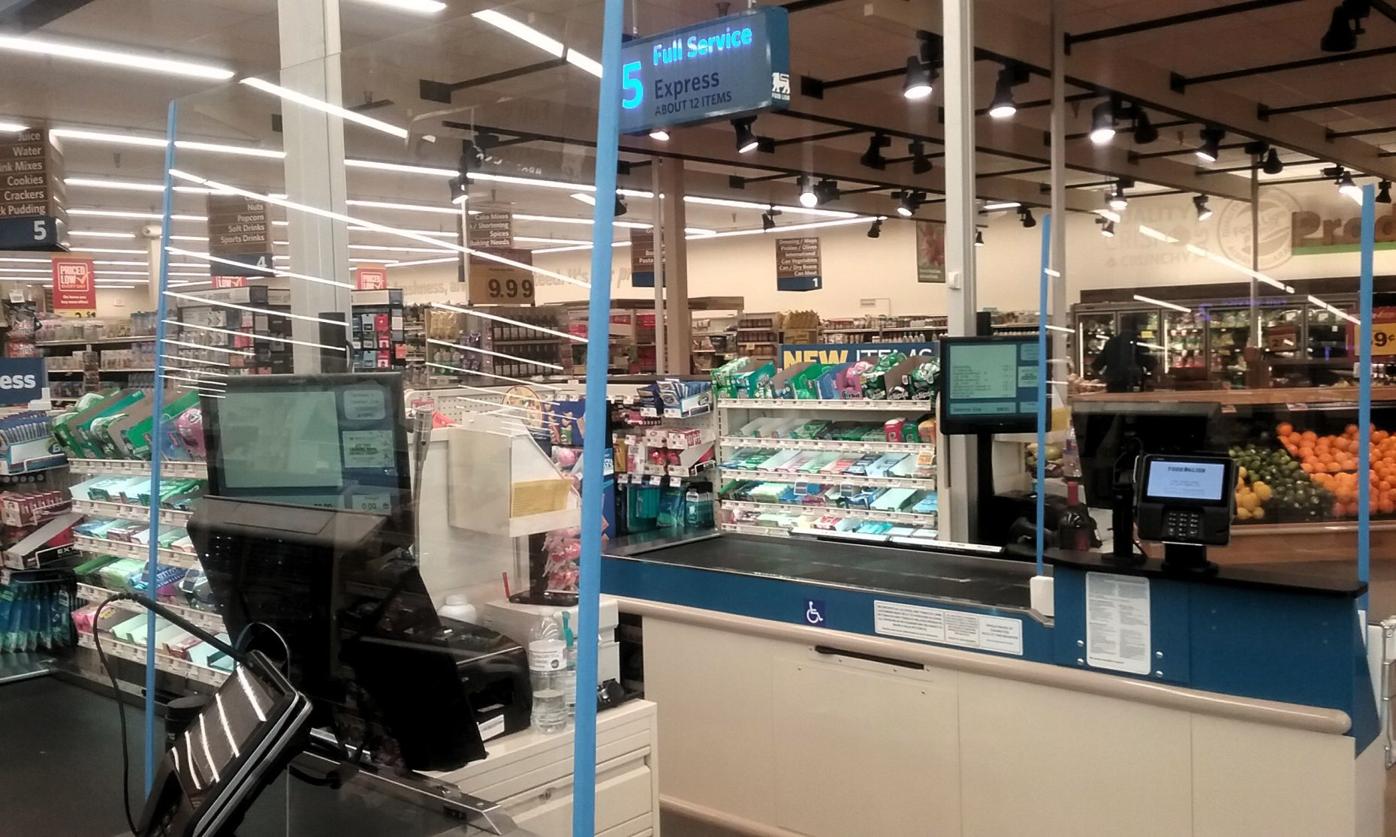 Several grocery stores and retail chains have installed new shields such as this one photographed at the Food Lion of Blowing Rock on March 30. These shields have been installed as a measure to help protect employees and customers during the checkout process and help mark off six feet of distance in compliance with social distancing. 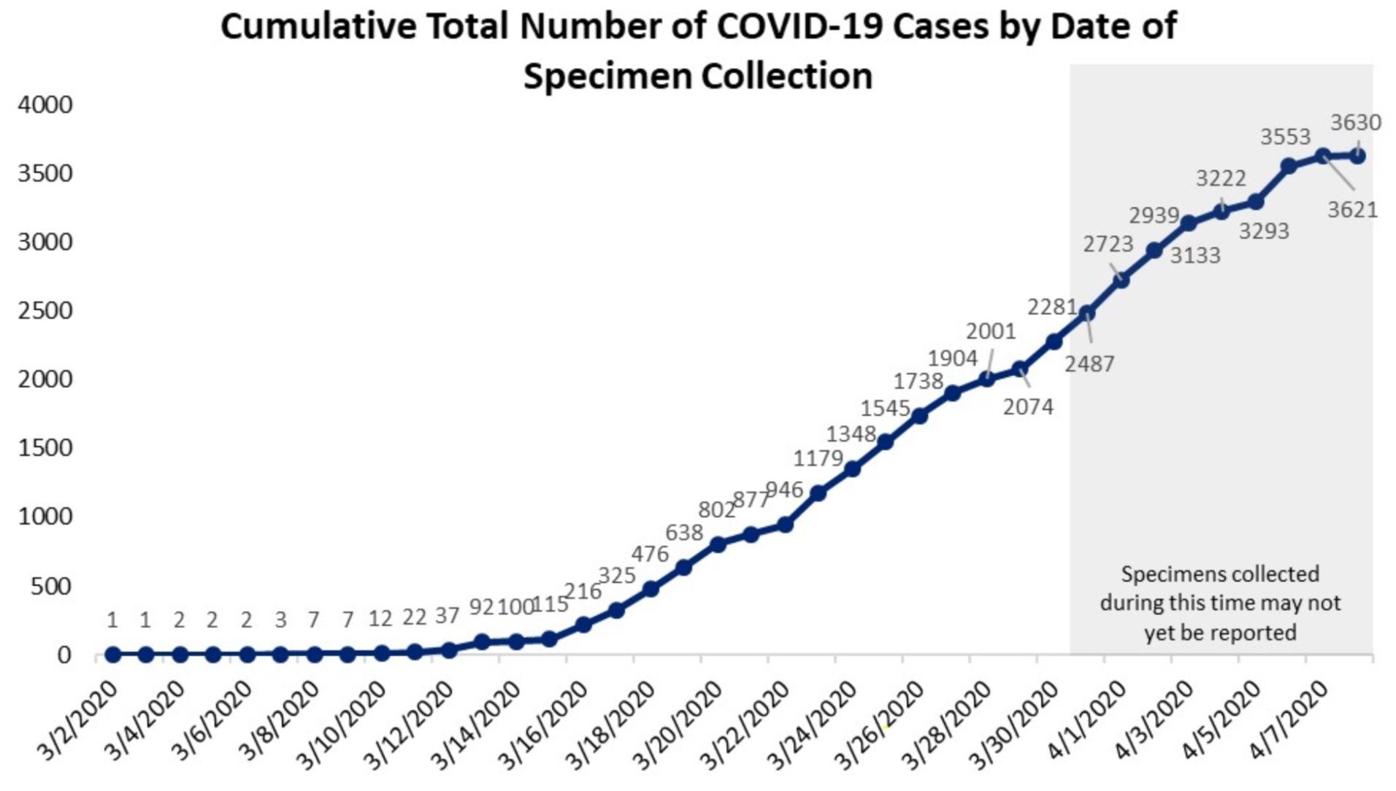 This graph depicts the number of positive COVID-19 cases by date of collection, according to the North Carolina Department of Health and Human Services as of April 9. The last 10 days are incomplete due to test results that have yet to be confirmed.

Several grocery stores and retail chains have installed new shields such as this one photographed at the Food Lion of Blowing Rock on March 30. These shields have been installed as a measure to help protect employees and customers during the checkout process and help mark off six feet of distance in compliance with social distancing.

This graph depicts the number of positive COVID-19 cases by date of collection, according to the North Carolina Department of Health and Human Services as of April 9. The last 10 days are incomplete due to test results that have yet to be confirmed.

RALEIGH — N.C. Gov. Roy Cooper announced and signed a new executive order on April 9 that limited stores that are still open to having no more than 20 percent of its fire-code capacity, or five people for every 1,000 square feet, in an effort to slow the spread of COVID-19.

“This should make shopping safer for everyone and help prevent stores from becoming flashpoints for virus transmission,” Cooper said on April 9.

The order goes into effect at 5 p.m. on Monday, April 13. Cooper said that the order is enforceable as a Class II misdemeanor.

“The order also encourages stores to make hand sanitizer accessible, set shopping times for seniors and at-risk people, use shields at check-out and mark aisles as one-way to limit traffic,” Cooper said. “I know a number of stores have already taken steps like these, and I thank them.”

The second part of the new Cooper order includes mandatory protective measures for nursing homes that had previously been recommended as guidance. Those measures include preventing dining and group activities in common spaces, requiring face masks for employees and screening of those employees.

“We are focusing efforts on these congregant care institutions since the nature of the virus makes them easy targets for outbreaks,” Cooper said.

The third part of this order requires additional measures that will get more unemployment claims processed faster, Cooper said.

“The order makes it easier for employers to file a batch of claims on behalf of their employees,” Cooper said. “This is known as an attached claim.”

Cooper said the state has accepted 497,000 unemployment claims and has sent $40.3 million to N.C. residents as of April 9. The federal funds are set to be distributed “by the end of next week,” Cooper said.

Seventy-two people in North Carolina have died with the COVID-19 virus and 3,718 people have tested positive as of 4:25 p.m. Thursday, April 9, according to the Raleigh News & Observer.

The N.C. Department of Health and Human Services reported at 11 a.m. April 9 that 398 people are hospitalized with the virus and 3,651 residents have tested positive for the virus. The numbers reported by the newspaper, which is compiling the numbers of cases announced by counties throughout the day, vary from the daily reports provided by N.C. DHHS.

N.C. DHHS has emphasized that not all people with symptoms of COVID-19 are being tested, and the numbers reported by county and state health departments do not represent the total number of people infected throughout the state.

Watauga County has seven reported cases among residents, plus a traveler who tested positive who is self-isolating in the county, according to AppHealthCare, the district health department for Watauga, Ashe and Alleghany counties.

Appalachian Regional Healthcare System, which is based in Boone, announced April 9 that one of its employees has tested positive for the virus, who resides in Ashe County. The person had travel history, did not provide direct patient care, has been in quarantine and is recovering at home, ARHS said.

“Additionally, ARHS has been working with the health department to identify other staff who may have been in contact with the employee who tested positive,” ARHS announced. “Each of these employees has also self-quarantined.”

The employee is a resident of Ashe County and was a previously announced case, AppHealthCare spokesperson Melissa Bracey said on April 9.

“As a health care organization operating in accordance with the Health Insurance Portability and Accountability Act, we take very seriously our commitment to preserving protected health information and respecting the privacy of individuals infected by the virus,” said Rob Hudspeth, ARHS senior vice resident.

“ARHS will continue to work closely with AppHealthCare and local, state and national health officials to ensure we are taking the strongest possible precautions to keep employees and patients safe,” the system stated.

A total of 47,809 tests have been completed by the N.C. State Laboratory of Public Health and reporting hospitals and commercial labs, according to the N.C. DHHS as of April 9.

Of the 69 COVID-19-related deaths reported by N.C. DHHS as of April 9, 82 percent were among individuals 65 and older, and 72 percent have been males.

As of April 9, the Institute for Health Metrics and Evaluation at the University of Washington, an independent global health research center, is projecting that peak resource use and deaths will occur in North Carolina on April 15. The IHME model is updated regularly as new data are available and is subject to change.

Scenarios modeled by a team of researchers from Blue Cross and Blue Shield of NC, Duke University, NoviSci, RTI International and the University of North Carolina indicate that lifting all social distancing policies soon after April 29 may lead to a greater than 50 percent probability that hospital acute care and ICU bed capacity will be outstripped, according to a report shared by NCDHHS.

“Our current best estimate is that if, after April 29, we immediately return to the rates of viral transmission occurring prior to widespread social distancing, stress on hospitals to cope with rising demand from COVID-19 patients could begin as soon as Memorial Day,” the report stated.