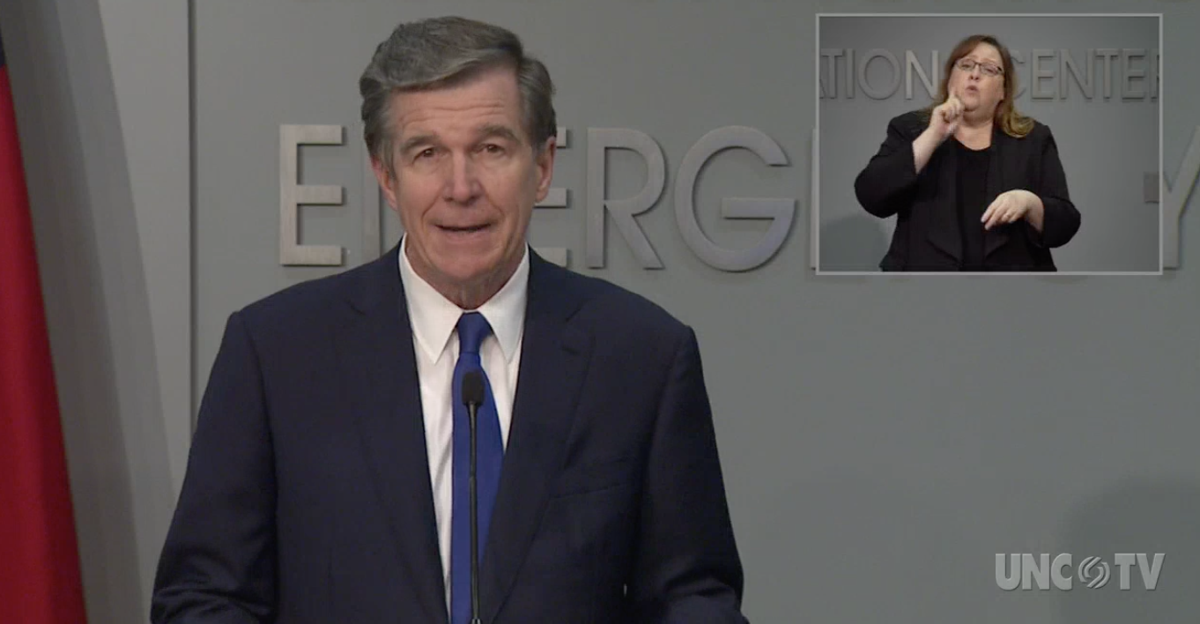 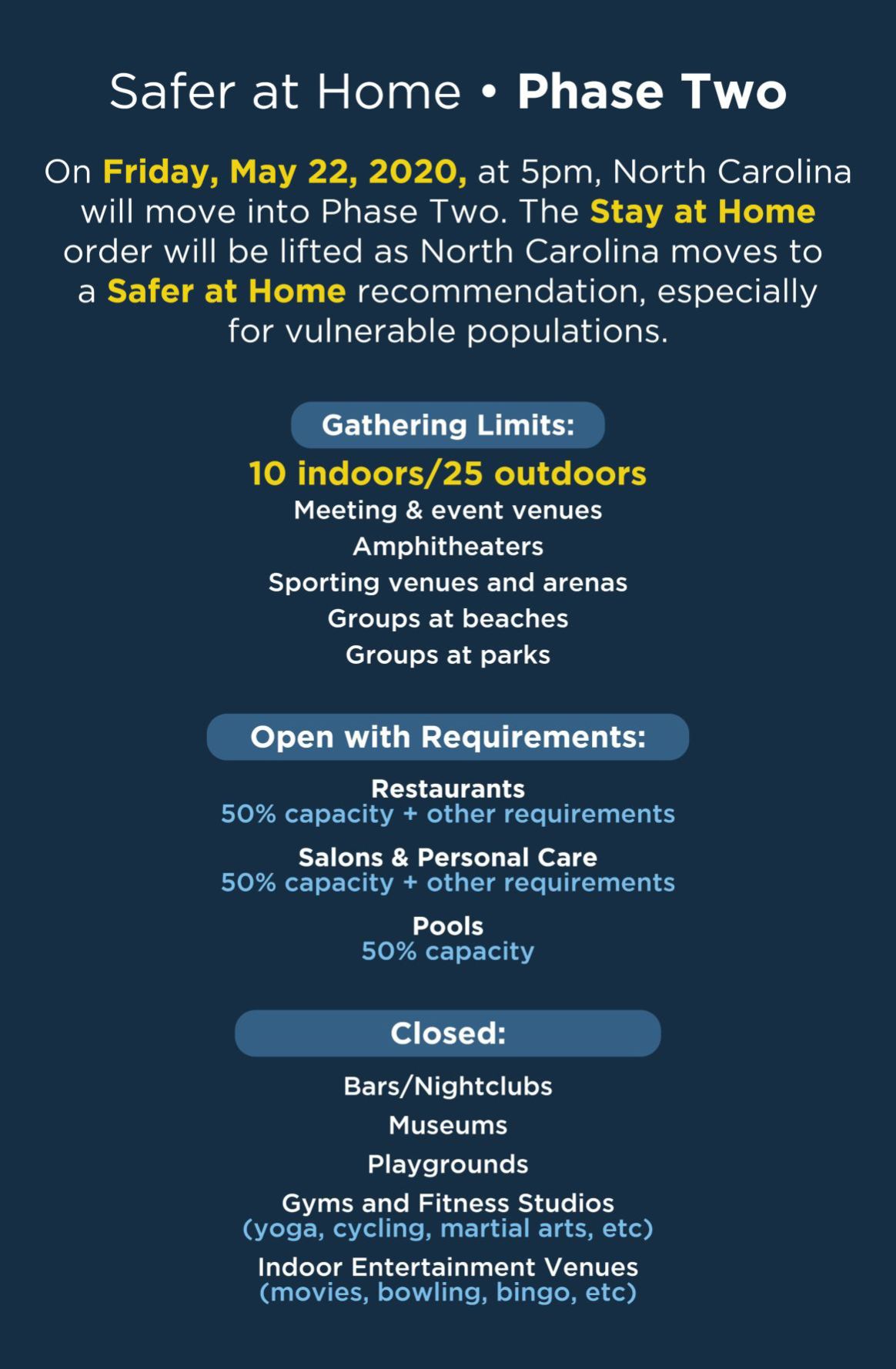 Gov. Roy Cooper announced on May 20 the movement of North Carolina into Phase 2 of restrictions in its response to COVID-19.

Gov. Roy Cooper announced on May 20 the movement of North Carolina into Phase 2 of restrictions in its response to COVID-19.

RALEIGH — N.C. Gov. Roy Cooper announced on May 20 that North Carolina would move into Phase 2 of the statewide reopening plan at 5 p.m. on May 22 with the approval of Executive Order 141.

In this phase, Cooper said the state will lift the “stay at home” order and shift to a “safer at home” recommendation.

“We still have some work to do to slow the spread of this virus,” Cooper said.

Cooper said that since the state announced the beginning of Phase 1, officials have continued to monitor trends. He added that the state’s overall key indicators remain stable, but the continued increases in daily case counts signal a need to take a more modest step forward in Phase 2 than originally envisioned.

Public health recommendations have been provided for worship services to practice enhanced social distancing and other cleaning and hygiene practices, according to Cooper’s office.

“The mass gathering limit and other requirements of this executive order do not apply to worship, religious and spiritual gatherings, funeral ceremonies, wedding ceremonies and other activities constituting the exercise of First Amendment rights,” according to state officials.

Certain businesses will be able open at limited capacity with other requirements and recommendations. These recommendations include restaurants offering dine-in at 50 capacity, personal care businesses (including salons and barbers) operating at 50 percent capacity and public pools operating at 50 percent capacity — all with distancing and cleaning requirements. Employees of personal care businesses will be required to wear face coverings, according to Cooper’s office.

Retail businesses that were allowed to open in Phase 1 at 50 percent capacity will continue at that level. Retail businesses are encouraged to limit customers inside the store to an emergency maximum occupancy, mark six feet of spacing in lines at point of sale and in other high-traffic areas for customers, conduct daily symptom screening of workers using a standard interview questionnaire of symptoms and perform frequent and routine environmental cleaning and disinfection of high-touch areas with an EPA-approved disinfectant for SARS-CoV-2.

Restaurants are to follow similar rules while limiting customers at tables so that no more than 10 people shall be seated together at the same table (unless they are members of the same household). Restaurant establishments are also asked to ensure that customers sitting at a table are not within six feet of any customers sitting at another table.

Child care facilities, day camps and overnight camps will be allowed to open with enhanced cleaning and screening requirements in Phase 2.

“While North Carolina’s reopening has lagged our neighboring competitors for too long, this is welcome news for thousands of families who rely on revenue from businesses in our state,” stated State House Speaker Tim Moore (R-Cleveland). “To every business owner and employee in our state who is getting back to work, we thank you for your sacrifice on behalf of others as we continue to protect public health together in a bipartisan way for all of North Carolina.”

While he believes Phase 2 will help boost the economy, Cooper added that the state wants to remind citizens that they are “safer at home.”

N.C. Department of Health and Human Services Secretary Mandy Cohen said Phase 2 will likely last five weeks to give officials a longer period of time to continue to monitor key indicators. Cooper’s office stated that Phase 2 will go through at least Friday, June 26.

Cohen said the state also plans to expand its contract tracing efforts, as 250 people are already deployed across the state for that work with more to come.

AppHealthCare — the health department serving Ashe, Alleghany and Watauga counties — recently trained nine more staff members to conduct contract tracing, according to Health Director Jennifer Greene. Greene spoke with the Watauga County Board of Commissioners on May 19, and said whenever a positive COVID-19 case is identified, health department staff conduct a case investigation to determine who may be at risk due to their exposure. Those who had close contact with the positive case are now being offered a test to hopefully ward off any outbreaks that could occur, she said.

Greene mentioned to the Watauga commissioners that some businesses in the county had taken a training to protect employees and customers during the pandemic. The training can be found by visiting countonmenc.org.

Senate Leader Phil Berger (R-Rockingham) stated on May 20 that he was glad that Cooper has responded to the calls of senators, small business owners and unemployed workers to let them to get back to work. He added that when he asked Cooper last week to reopen restaurants and personal care services, Cooper reportedly said it wasn’t safe to do so at that time.

“But according to data for yesterday, when the governor began notifying people of his decision, North Carolina had more cases, more hospitalizations and fewer tests performed than when I issued my call last week,” Berger said. “It seems strange that it was unsafe to reopen last week, but it’s safe to reopen now with worse numbers.”

For more information on COVID-19 and the state’s response, visit covid19.ncdhhs.gov.

FAQ for Executive Order No. 141