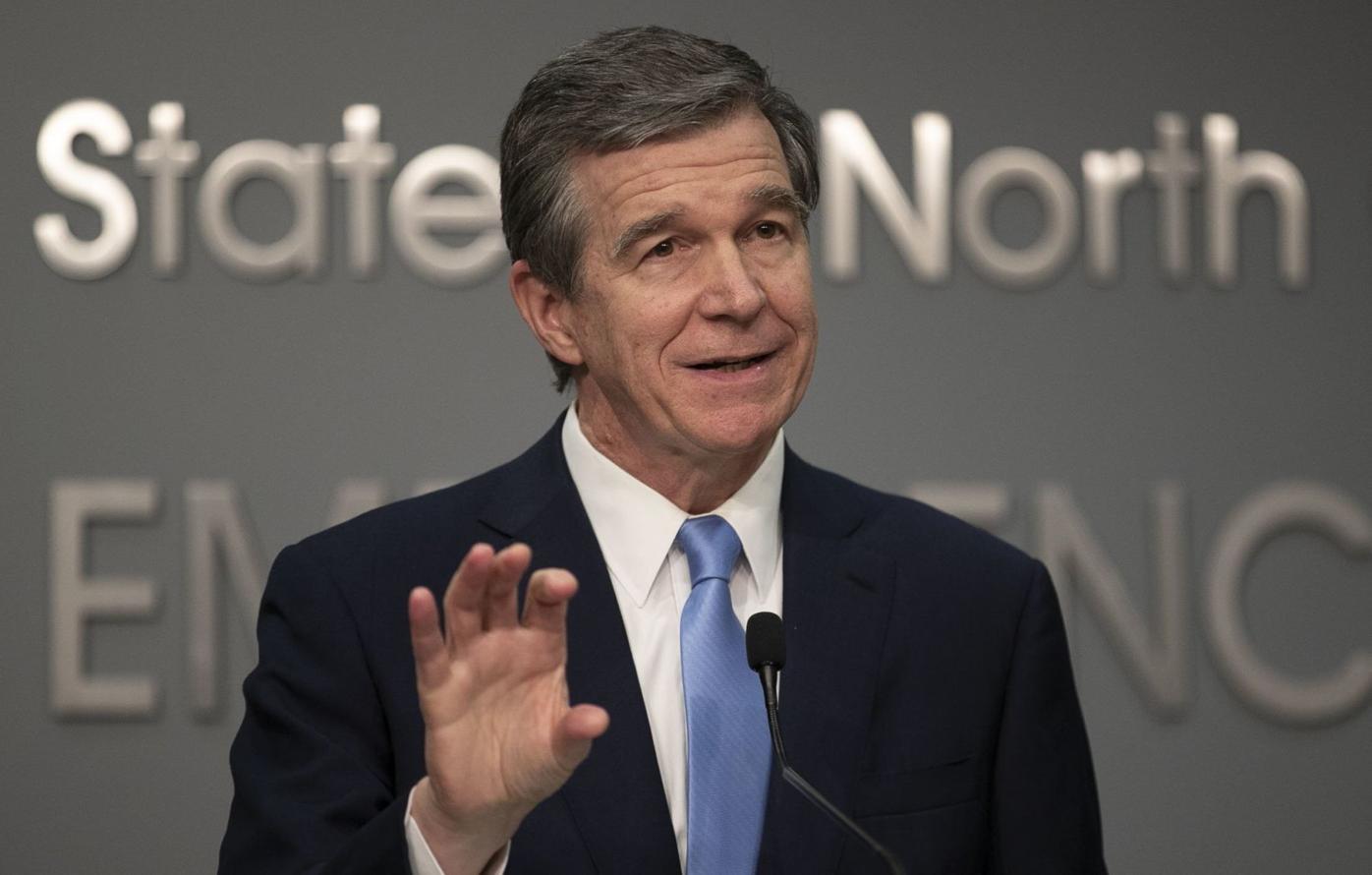 North Carolina Gov. Roy Cooper announces that his stay-at-home order will be extended until May 8 during a press briefing on the COVID-19 virus on Thursday, April 23, at the Emergency Operations Center in Raleigh. 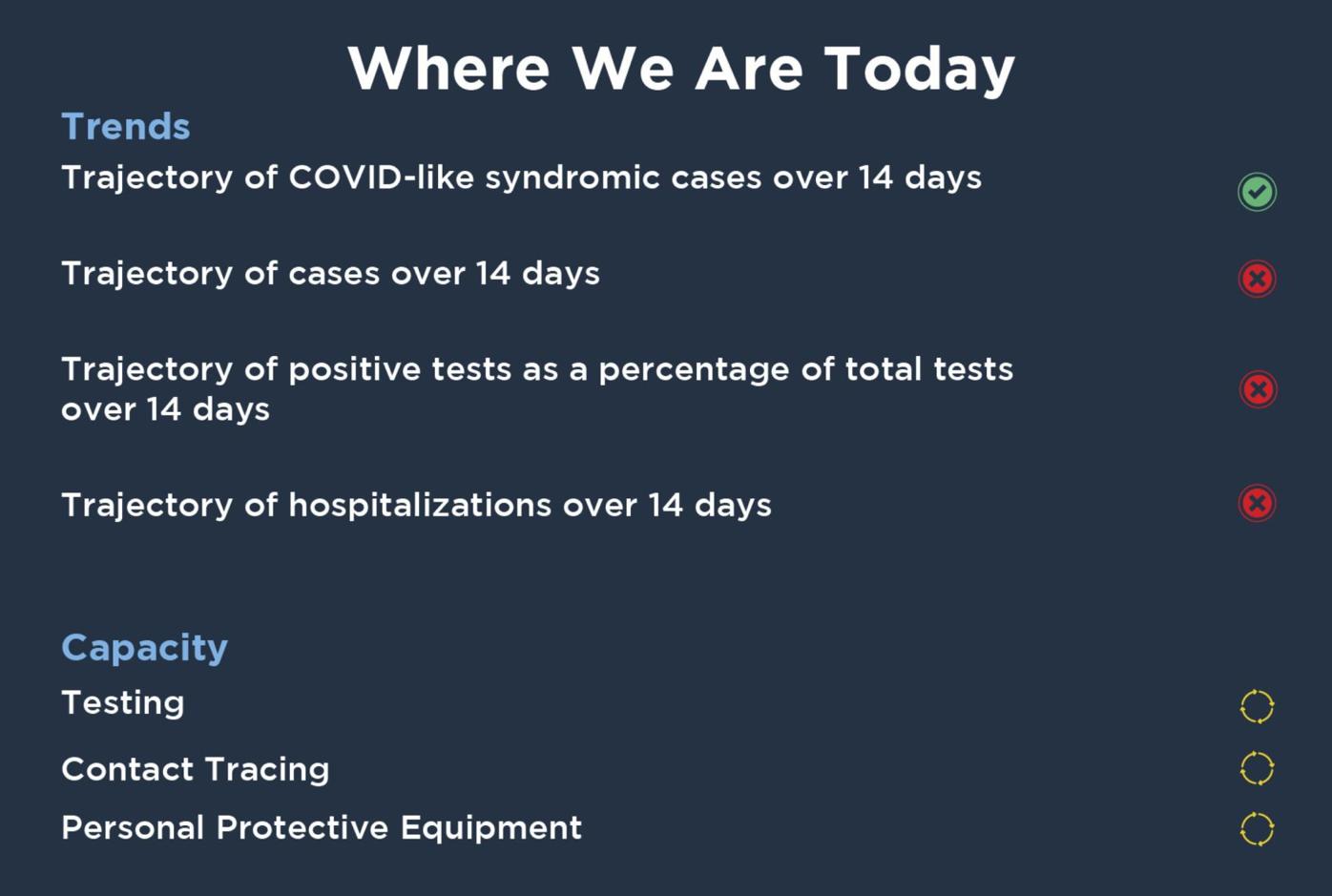 Gov. Roy Cooper and N.C. Department of Health and Human Services Secretary Mandy Cohen provided more specificity on the targets in testing, contact tracing and trends they want to reach before beginning to ease state restrictions.

North Carolina Gov. Roy Cooper announces that his stay-at-home order will be extended until May 8 during a press briefing on the COVID-19 virus on Thursday, April 23, at the Emergency Operations Center in Raleigh.

Gov. Roy Cooper and N.C. Department of Health and Human Services Secretary Mandy Cohen provided more specificity on the targets in testing, contact tracing and trends they want to reach before beginning to ease state restrictions.

RALEIGH — Gov. Roy Cooper on April 23 announced that he was extending the state’s stay-at-home order until May 8 and announced a phased plan for lifting state restrictions put in place to slow the spread of the COVID-19 virus.

Executive Order 135, which took effect April 23, also extended the state’s ban on dine-in services at restaurants; the closure of “close-contact” businesses such as salons, movie theaters and gyms; the ban of gatherings of more than 10 people; and other restrictions until May 8. Cooper said an announcement would be made on Friday afternoon with regard to public schools, which are currently closed through May 15.

“It’s important to get our economy moving forward,” Cooper said at a 3 p.m. press briefing. “We’re helping with unemployment payments, stimulus money and the businesses that continue to be open. But I won’t risk the health of our people or our hospitals. And easing these restrictions now would do that.”

Cooper and N.C. Department of Health and Human Services Secretary Mandy Cohen provided more specificity on the targets in testing, contact tracing and trends they want to reach before beginning to ease state restrictions. Cooper said the Trump Administration shared similar guidance with states and that N.C. leaders incorporated much of that guidance into their plan.

“After a thorough analysis of the details of testing, tracing and trends, and having conversations with Trump Administration officials like Dr. (Anthony) Fauci, it’s clear that we are on the right path but that our state is not ready to lift restrictions yet,” Cooper said.

Cohen said the state wants to see testing increased from 2,500-3,000 people per day to 5,000-7,000 per day. The state also wants to double the number of staff trained in contact tracing at local health departments from 250 to 500 statewide. And state leaders want to increase the availability of personal protective equipment (PPE) for health care workers to at least a 30-day supply — currently the state does not have a 30-day supply of gowns and N95 masks, Cohen said.

“The hard work you’ve been doing has meant that North Carolina is in a very good place,” Cohen said. “We have flattened the curve, but we’re not there quite yet.”

Cooper said his team has developed a three-phased plan to reopen the state.

In the first phase, the stay-at-home order remains in place, but it will be modified to allow for more reasons to leave home, including commercial activities, Cooper said. Local emergency orders with more restrictive measures may remain in place.

Retailers and services will still need to implement social distancing, cleaning and other protocols, such as screening of employees for symptoms. Gatherings will continue to be limited to 10 people. Parks will be allowed to reopen with gathering limits.

Face coverings will be recommended in public, and restrictions will remain in place for nursing homes and congregate homes.

Cooper said the state would need to see improvement in its testing, tracing and trends benchmarks before deciding to implement the first phase of reopening on May 9.

Phase 2 would be implemented at least two to three weeks after phase 1, if benchmarks are being met.

The second phase would lift the stay-at-home order with strong encouragement for vulnerable populations to continue staying at home. It would allow the limited opening of restaurants, bars, fitness centers, personal care services and other businesses that can follow safety protocols, including the potential need to reduce capacity.

Phase 2 would allow gathering at places such as houses of worship and entertainment venues at reduced capacity, it would increase the number of people allowed at gatherings and would open public playgrounds. Rigorous restrictions on nursing homes and other congregate care settings would continue.

The third phase would begin at least four to six weeks after Phase 2, Cooper said.

Phase 3 would lessen restrictions for vulnerable populations with encouragement to continue practicing physical distancing and minimizing exposure to settings where distancing isn’t possible.

It would allow increased capacity at restaurants, bars, other businesses, houses of worship and entertainment venues and further increase the number of people allowed at gatherings. It would continue rigorous restrictions on nursing homes and other congregate care settings.

Cooper said it was important to note that as the state moves through the phases, if benchmarks “start to move in the wrong direction,” the state may have to move back to a previous phase to protect public health.

“If we keep protecting ourselves and go back to work and play carefully, we can rebuild the damage that this virus has done to our state,” Cooper said.

In a statement, N.C. Senate Leader Phil Berger, a Republican, said the Democratic governor effectively extended the current shutdown through at least June 1, with no local flexibility.

“The fact that we now have some detail is welcome progress, though reasonable people will disagree on the merits,” Berger said. “Gov. Cooper has extended the statewide restaurant closure through June 1, by which point many of those small businesses will likely be bankrupt.”

Berger pressed state leaders to provide more information on the modeling they are using to make decisions, the numbers of COVID-19-related deaths in people with pre-existing conditions and how many people have recovered.

“I’ve long said that we all need to do our part on social distancing and put the peak of the curve in our rear-view mirror before we can begin to safely re-open our economy,” Tillis said. “Governor Cooper’s plan is in line with the White House Coronavirus Task Force’s recommended guidance for states to re-open.

“So many families and small businesses are suffering right now, and I share the urgency of many North Carolinians to get our economy back up and running as soon as possible. At the same time, the worst thing that could happen is for us to have a significantly worse second spike that results in more loss of life and forces another shutdown of our economy.”

BOONE — Watauga County leaders and AppHealthCare are actively planning and determining what reopening will mean for the local community, the o…