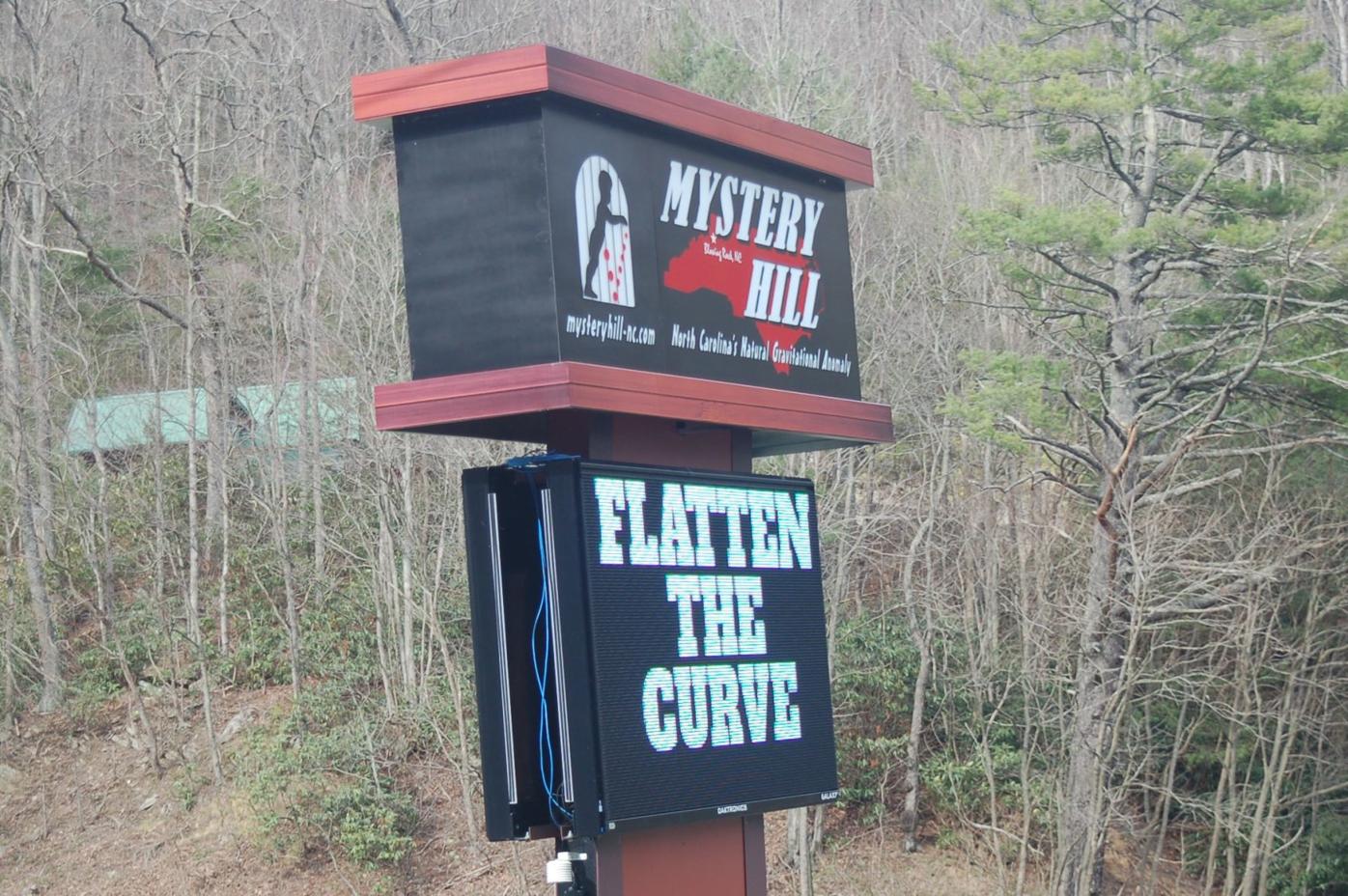 The digital sign at Mystery Hill asks U.S. 321 drivers to help prevent the spread of COVID-19, as pictured on March 30. 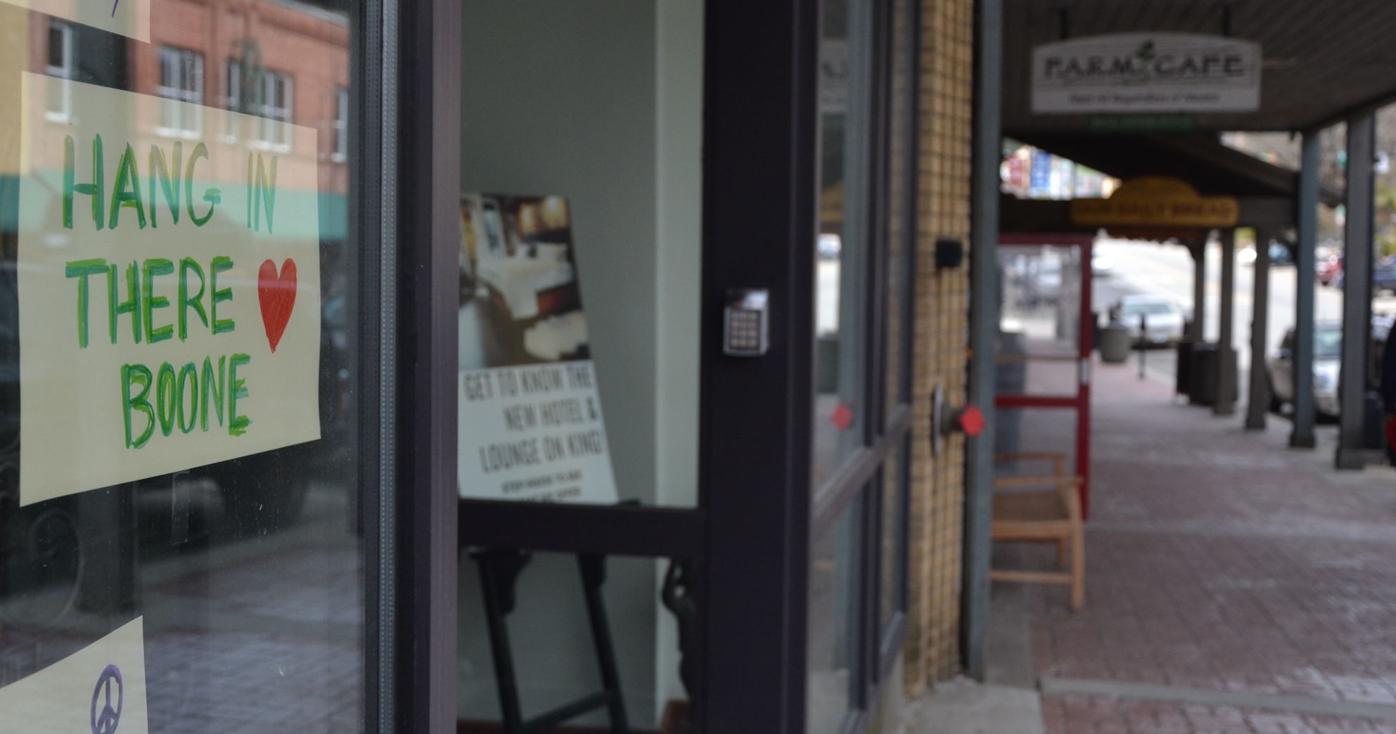 One of many encouraging paper signs on the glass of the Horton Hotel on West King Street as pictured on March 30 on the first day of the ‘shelter in place’ order from N.C. Gov. Roy Cooper. 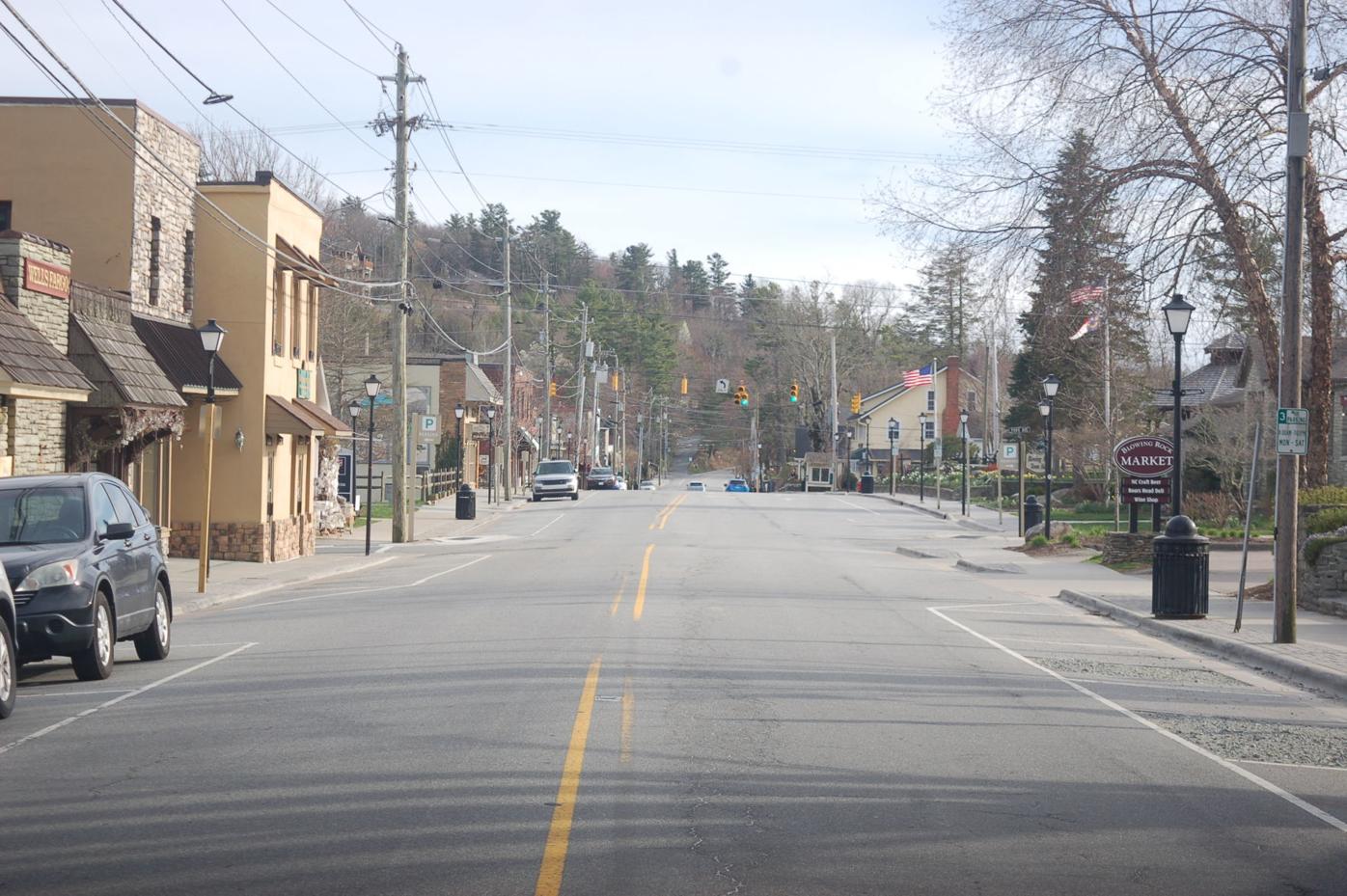 Downtown Blowing Rock as pictured at 5 p.m. on March 31. Usually on a nice spring day such as this, downtown Blowing Rock would be full of tourists and locals, but due to COVID-19 and the stay at home mandated by N.C. Gov. Roy Cooper, the streets are empty. 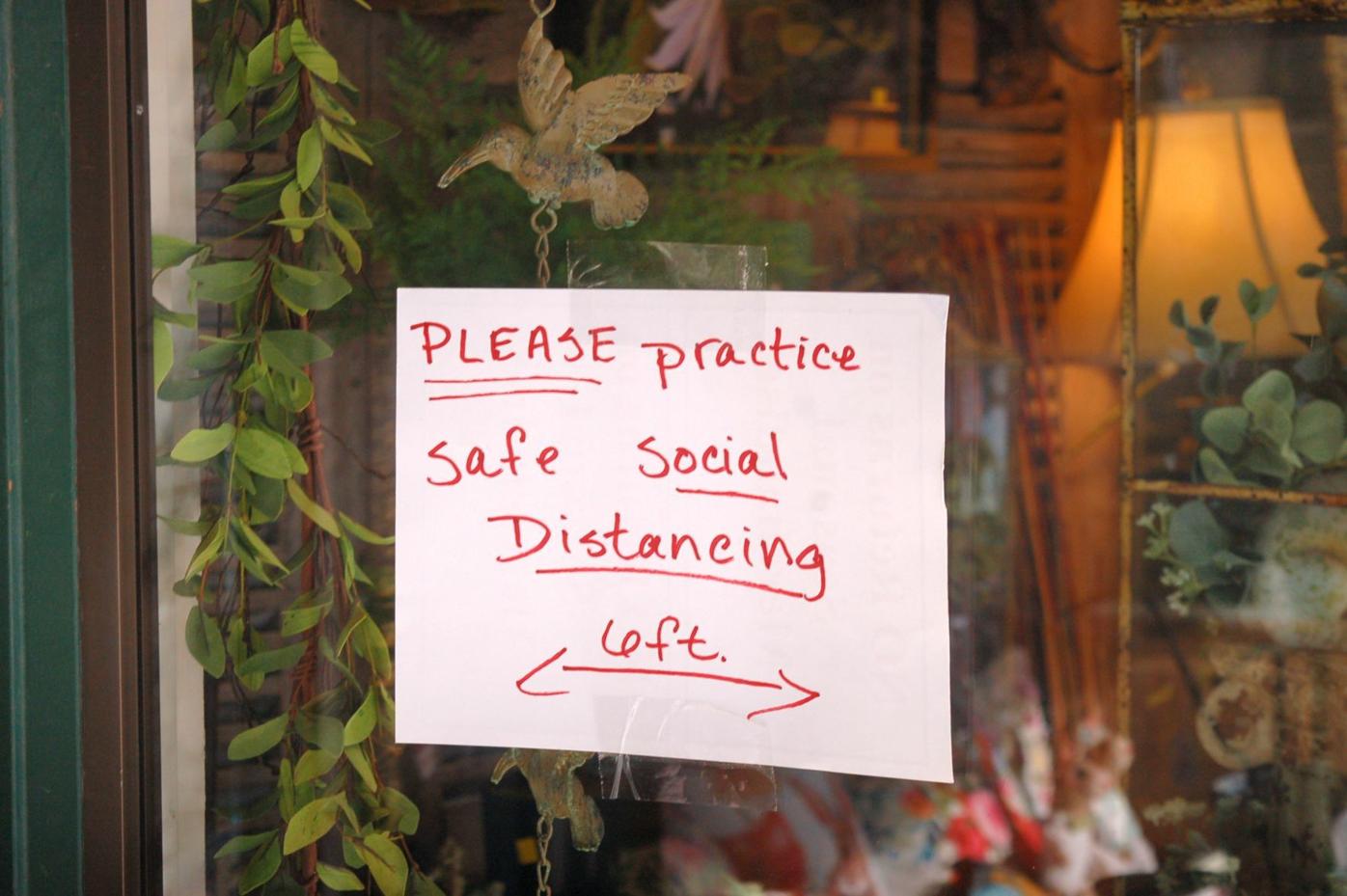 A sign near the entrance to The Brass Exchange in Blowing Rock implores people to practice social distancing, as pictured on March 30. 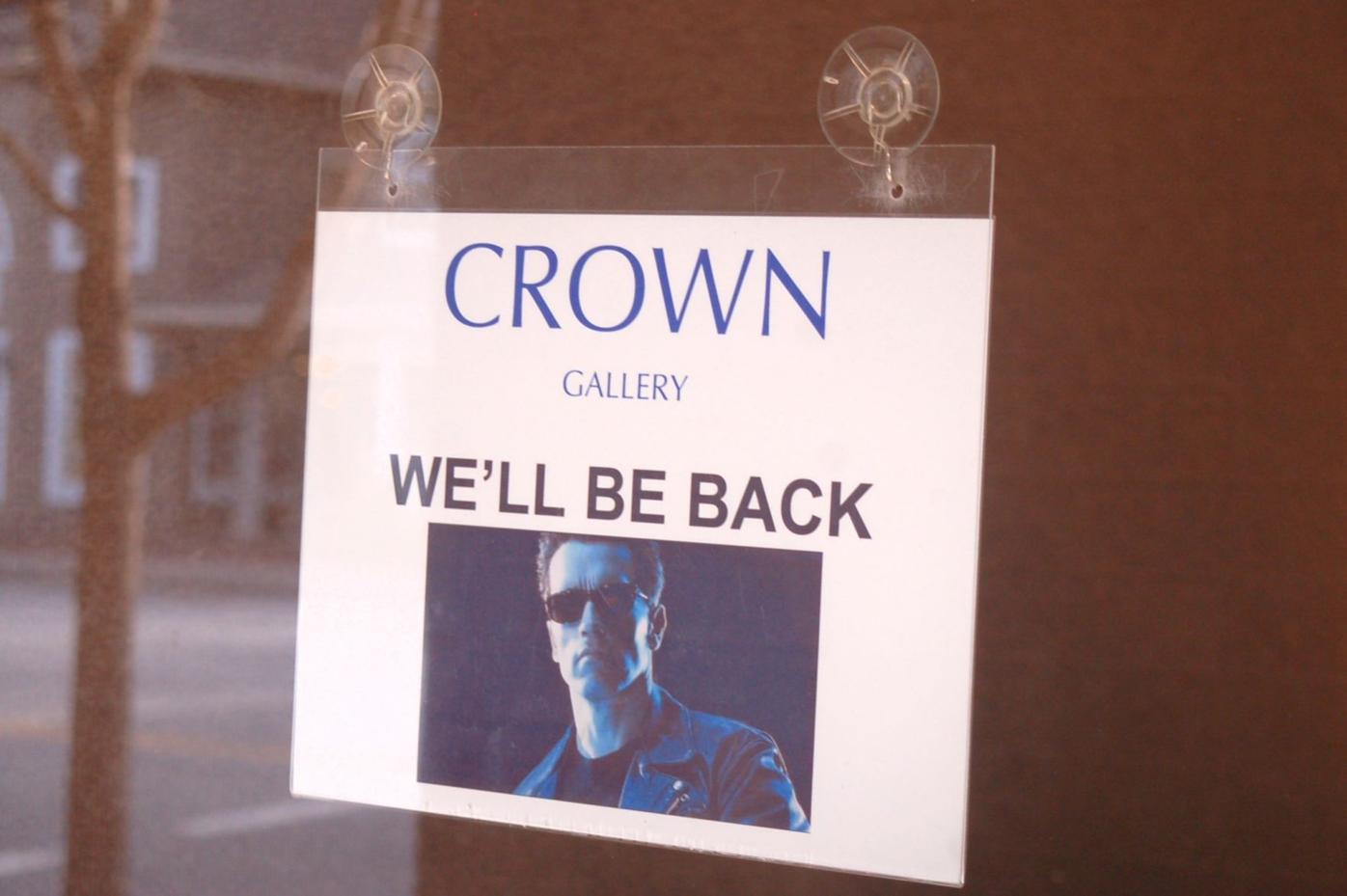 Crown Gallery in downtown Blowing Rock lets patrons know through the words of The Terminator that they will return, as pictured on March 31.

The digital sign at Mystery Hill asks U.S. 321 drivers to help prevent the spread of COVID-19, as pictured on March 30.

One of many encouraging paper signs on the glass of the Horton Hotel on West King Street as pictured on March 30 on the first day of the ‘shelter in place’ order from N.C. Gov. Roy Cooper.

Downtown Blowing Rock as pictured at 5 p.m. on March 31. Usually on a nice spring day such as this, downtown Blowing Rock would be full of tourists and locals, but due to COVID-19 and the stay at home mandated by N.C. Gov. Roy Cooper, the streets are empty.

A sign near the entrance to The Brass Exchange in Blowing Rock implores people to practice social distancing, as pictured on March 30.

Crown Gallery in downtown Blowing Rock lets patrons know through the words of The Terminator that they will return, as pictured on March 31.

WATAUGA — In the first week of N.C. Gov. Roy Cooper’s executive order saying only “essential businesses” could remain open during the COVID-19 pandemic, many local retailers have closed up while restaurants try to remain open and others keep on trudging along.

The effect of COVID-19 and Cooper’s orders has ground business in the state to a halt, mirroring other states and countries as everyone ponders how long the pandemic will last.

Retailers could be faced with the same employment decisions that restaurants and lodging options have been faced with previously. According to a presentation by the N.C. Restaurant and Lodging Association to N.C. legislators on March 31, out of the approximately 500,000 restaurant jobs in North Carolina, 350,000 have been lost as a result of COVID-19 related closures, the group stated. In addition, out of 80,000 hotel jobs, 23,000 have been cut.

“Before COVID-19, restaurant and lodging establishments provided jobs for more than 13 percent of the state’s workforce and generated more than $23.5 billion in sales annually,” the N.C. Restaurant and Lodging Association’s presentation stated.

Blowing Rock Chamber of Commerce President and CEO Charles Hardin said April 2 that almost all of the town’s retail stores have closed to comply with the order.

Board games, card games and comic book store Dragon’s Den in Boone went ahead and temporarily closed as a result of Cooper’s March 27 executive order, saying in a March 30 Facebook post that it hopes to reopen on April 30.

Hardin stressed that businesses seek to keep employees on payroll, saying that special COVID-19 federal assistance programs can help them out.

Other local food locations such as Boone Bagelry and The Local have temporarily closed for other reasons since the dine-in ban was ordered on March 17.

“We have made the extremely difficult decision to temporarily close our doors,” Boone Bagelry posted March 25 on its Facebook page. “Boonies know that we never close and this has not been an easy process. We want to do what’s best for our staff and our community and we feel like the responsible decision is to be as safe as possible and stay home. … We can’t wait to return full-speed ahead, ready to feed you.”

“As we contemplated the insidious nature of this virus and the terrible risk it poses to our and your loved ones, and what seems to be a troubling ‘curve,’ we’ve come to believe that our best course of action is to close our doors until this crisis has passed,” The Local posted online on March 29. “If we could continue to serve you while reducing the risk of transmission to zero, then we would. If we believed our service was essential to the survival of our community then we would greet you every day with hand sanitizer and a bright smile. Unfortunately, despite all our efforts to safeguard you, our suppliers and our staff, the reality is that we cannot, with 100 percent certainty, protect against the possibility of transmission.”

Specialty furniture maker Charleston Forge closed its factory and offices on March 30, “for the health and safety of our employees and their families, and as part of the ongoing effort to stem the spread of COVID-19,” with the intent on reopening April 13, the company announced online.

Tanger Outlets Blowing Rock General Manager Ronnie Mark said on April 1 that each of the 19 individual stores will make their own decisions, but he was unaware of any stores that had reopened since the original closures were announced earlier in March. The outlet’s office, while closed to the public, will remain operational, Mark said.

Going forward, Hardin said that businesses are concerned about the effects the shutdown orders could have beyond March and April, which are typically less busy months in the Blowing Rock business calendar.

“This, through April, is something I think most people can probably survive and live with, but if it goes into May, June or beyond, I think we’ll eventually see some fall-out,” Hardin said.

Cooper’s order included more than 30 different categories of “essential businesses,” which account for more than 100 types of businesses as specifically listed in the order. One of those types is for any business that maintains social distancing requirements for its employees and customers.

“All COVID-19 essential businesses and operations are directed, to the maximum extent possible, to direct employees to work from home or telework,” the order states.

Further, any business owner can request that it be included on the “essential business” list at www.ncdor.gov/request-be-considered-essential-business.

Criticism about what is considered an essential business has been circulating across social media.

“I think it’s quick to make a snap judgment without looking into what all goes into a business,” Boone Area Chamber of Commerce President and CEO David Jackson said. Area farmers markets, for example, are not just a “vanity event” where people go to socialize, he said — “for some people that really impacts their access to local food.”

Jackson noted that the chamber has been fielding a lot of questions about the order and other COVID-19 questions, and that staff have endeavored to research the order and consult with experts to provide answers or direct questions to sources with more information. He praised U.S. Rep. Virginia Foxx, N.C. Rep. Ray Russell and N.C. Sen. Deanna Ballard and their offices for their assistance in answering questions.

Hardin said the Serves You Right store in Blowing Rock is operating as a children’s bookstore and she has obtained permission from the state to do so until deemed otherwise. In addition, a couple of Blowing Rock stores are operating on an appointment-only basis, which he said was not clear in Cooper’s order.

Aside from Hobby Lobby, which has its own entrances and is sealed from the rest of the mall, the Boone Mall closed its doors on March 24 until further notice “due to the concerns about the spread of the COVID-19 virus,” a message on the mall’s website stated.

Blue Deer Cookies, which opened its warm-weather trailer location at 3551 U.S. 321 South on the weekend of March 27-29, feels like the positives outweigh the negatives.

Respecting state and federal regulations included having no outdoor seating, maintaining social distancing in the line and encouraging people to eat in their vehicles or elsewhere.

“My desire is that with the world feeling like it’s falling in on itself, if there’s something the community can look forward to, we’ll do it,” Northern said.

The sooner we all comply and stay at home, the sooner our State can return to normal