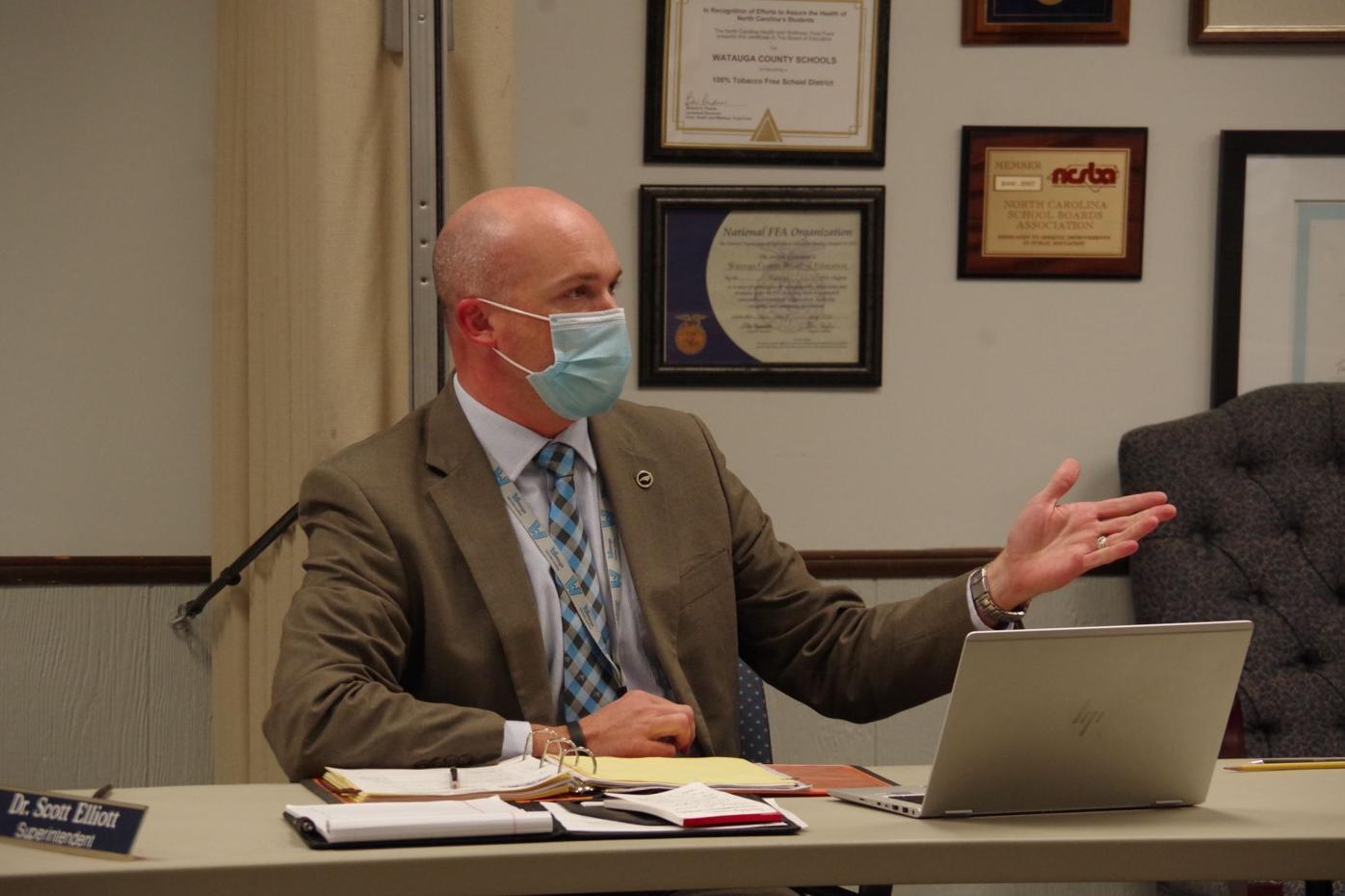 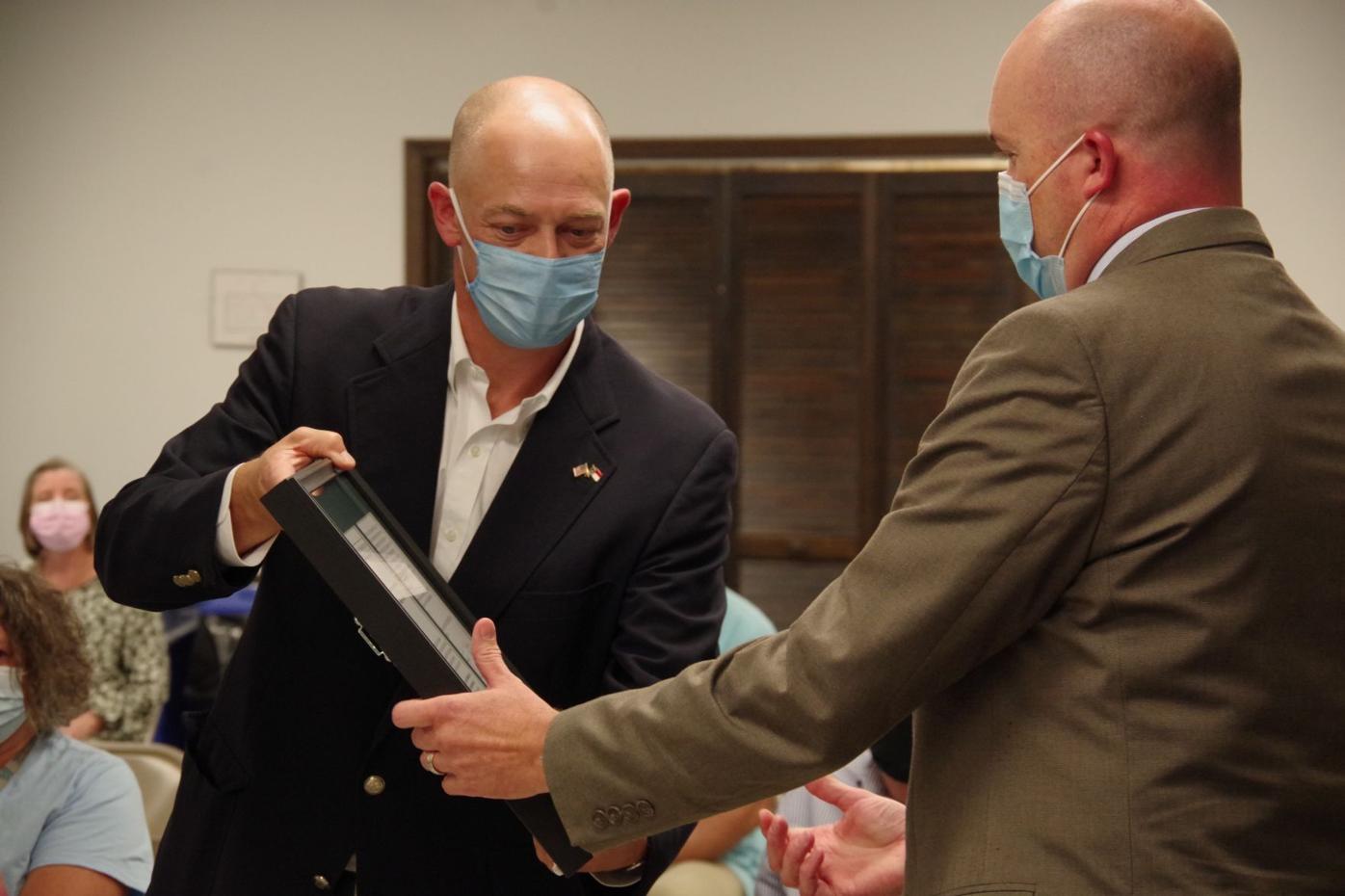 Watauga County Director of Elections Matt Snyder presents WCS Superintendent Scott Elliott with a letter of thanks for help with the 2020 Election.

Watauga County Director of Elections Matt Snyder presents WCS Superintendent Scott Elliott with a letter of thanks for help with the 2020 Election.

BOONE — At its Sept. 13 meeting, the Watauga County Board of Education unanimously re-approved the policy requiring the wearing of masks by students and staff that was first passed on Aug. 9.

State law requires county boards of education to revisit its position on mask mandates once a month. The Watauga County BOE did so with no discussion as it was passed in a slate with other items before the board in the consent agenda.

Board Chair Gary Childers said before the vote that he had not heard from any board member about discussing the policy at the meeting. No board member called for more discussion.

Later on during the public comment period — which typically occurs toward the end of each meeting — two community members and parents expressed their displeasure in the mask mandate and the fact that it was voted upon before public comment.

Michael Ackerman — who has a daughter with Down syndrome and attends Hardin Park — spoke first. He expressed his disappointment that the board voted on the mandate before hearing from the public.

“I’m not anti-mask, but I am anti-mandate,” Ackerman told the board. “Although one child death is one too many, we must keep it in perspective when we’re talking about our children.”

Ackerman also asked the board why they weren’t reporting the number of cases that were asymptomatic, had mild symptoms or required hospitalization.

“Shouldn’t these be the numbers we consider and not just the total number of cases?” Ackerman said. “I want my Sarah to be safe. But I don’t want my child to be forced to live in fear of a virus that will never go away.”

Ackerman also mentioned how students don’t have to wear masks while eating lunch and that there were large groups of students that are in close proximity to one another at the high school.

“I believe the long-term harm from forcing children to wear masks all day in school, especially to students like my daughter, far outweighs the minuscule risk posed from them not wearing masks as the data clearly shows,” Ackerman said.

According to the CDC, masks are a barrier to help prevent respiratory droplets from reaching others. The CDC has stated studies show masks reduce the spray of droplets when worn over the nose and mouth.

Emily Smith was the other community member who gave public comment. She said she agreed with everything that Ackerman said. She said that it used to be the case that children would get sick and spend a couple of days at home. She said students missing school due to the quarantine requirements is “ridiculous” when they are not sick.

Smith also mentioned PCR tests in response to the announcement that WCS will start implementing more testing to better gauge COVID-19 among students and staff. Students who are tested will have had previous consent from parents and the first school to start doing this will be a pilot program at Cove Creek. Smith mentioned that the creator of the PCR test — who died in August 2019 according to the NYT — said the tests were created to “make something out of nothing.”

“The fact that it is the one test we are using to like rule our whole world here. That’s ridiculous,” Smith said.

PCR tests, according to the World Health Organization, are the most commonly used molecular test. Samples are collected from the nose and/or throat with a swab and are used to detect virus in the sample by amplifying viral genetic material to detectable levels.

For this reason, a molecular test is used to confirm an active infection, usually within a few days of exposure and around the time that symptoms may begin, according to WHO.

Also at the board meeting, Watauga Virtual Academy Director Tamara Stamey gave an update about how the academy — the newest school in WCS — was doing.

WVA currently has 87 students enrolled in kindergarten though middle school. Stamey said her original goal was to have 50 students as only 43 students were originally signed up for WVA in July. The virtual academy currently has nine teachers.

At WVA, Mondays, Tuesdays and Thursdays are synchronous days of instruction virtually with the teacher. Direct instruction begins at 8:45 a.m. on each synchronous day and hat time will stay constant even if the district is on a delay.

Also during the meeting, the board was presented with a letter of appreciation from the Watauga County Board of Election.

Multiple schools played host to voting sites during the 2020 election, which Director of Elections Matt Snyder said helped the board with the 2020 general election.

“The 2020 General Election provided a long list of unusual and unique challenges resulting from intense political motivations and a host of safety concerns associated with the COVID-19 pandemic,” Snyder said. “Contributions of you and your board members, your staff colleagues and school principals exceeded all expectations. Election officials needed your help and you succeeded above and beyond the call of duty. We can’t say enough about the important role you all played in helping produce a highly successful election in this camp.”

Snyder read a portion of the letter to the board before presenting it to Watauga County Schools Superintendent Scott Elliott.

“No one could ask more than courteous support provided by the principals and our colleagues and the general election was a huge challenge,” Snyder read from the letter. “We deeply appreciate the vital role you played in achieving outstanding success.”

The Watauga County Board of Education will next meet on Oct. 11.

Unfortunately these boards do not care for the facts. The PCR tests have failed FDA approval for too high of false positives, and the creator of the test did state on record that they do not test for covid. As well, masks have been proven for decades to be ineffective against viral agents, and may even be harmful. Do these boards actually care about the public and our kids?

"'Smith mentioned that the creator of the PCR test — who died in August 2019 according to the NYT — said the tests were created to “make something out of nothing."'

Emily Smith's apocryphal quote attributed to Dr. Kary Mullis is just pure social media fake news. Can we get a fact check on this in the article?