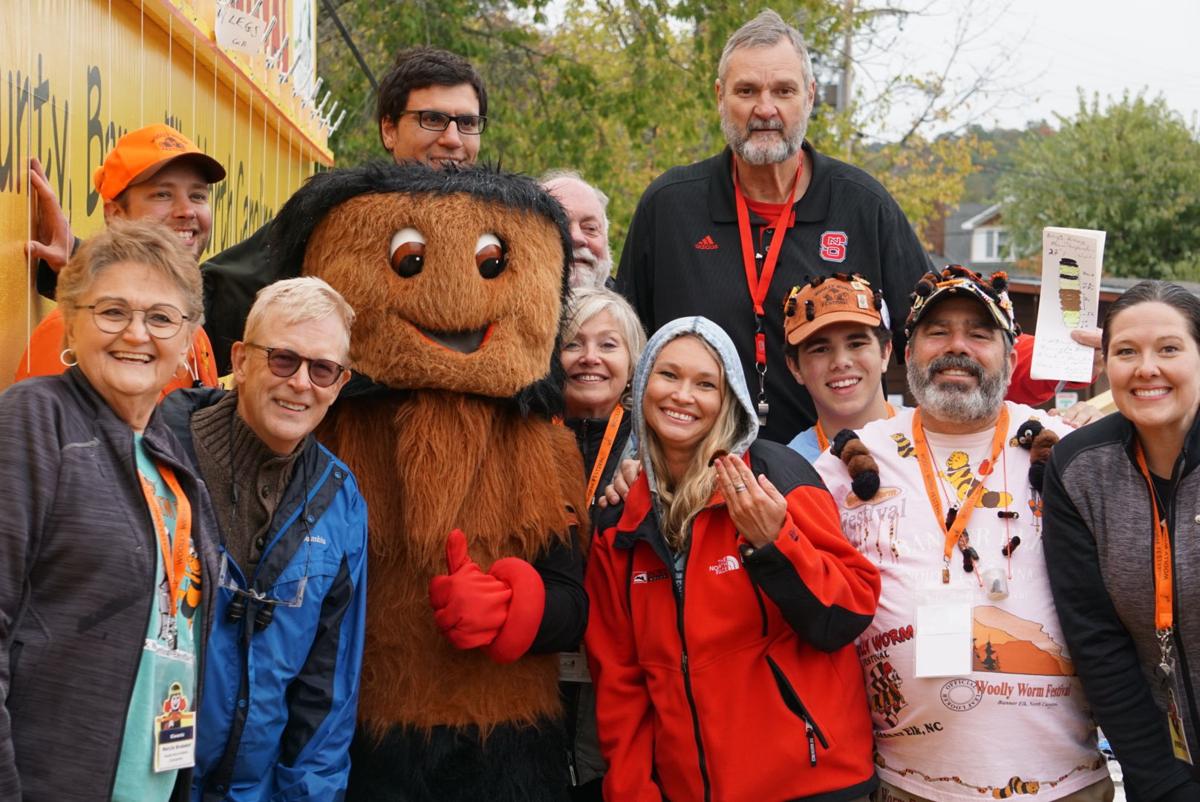 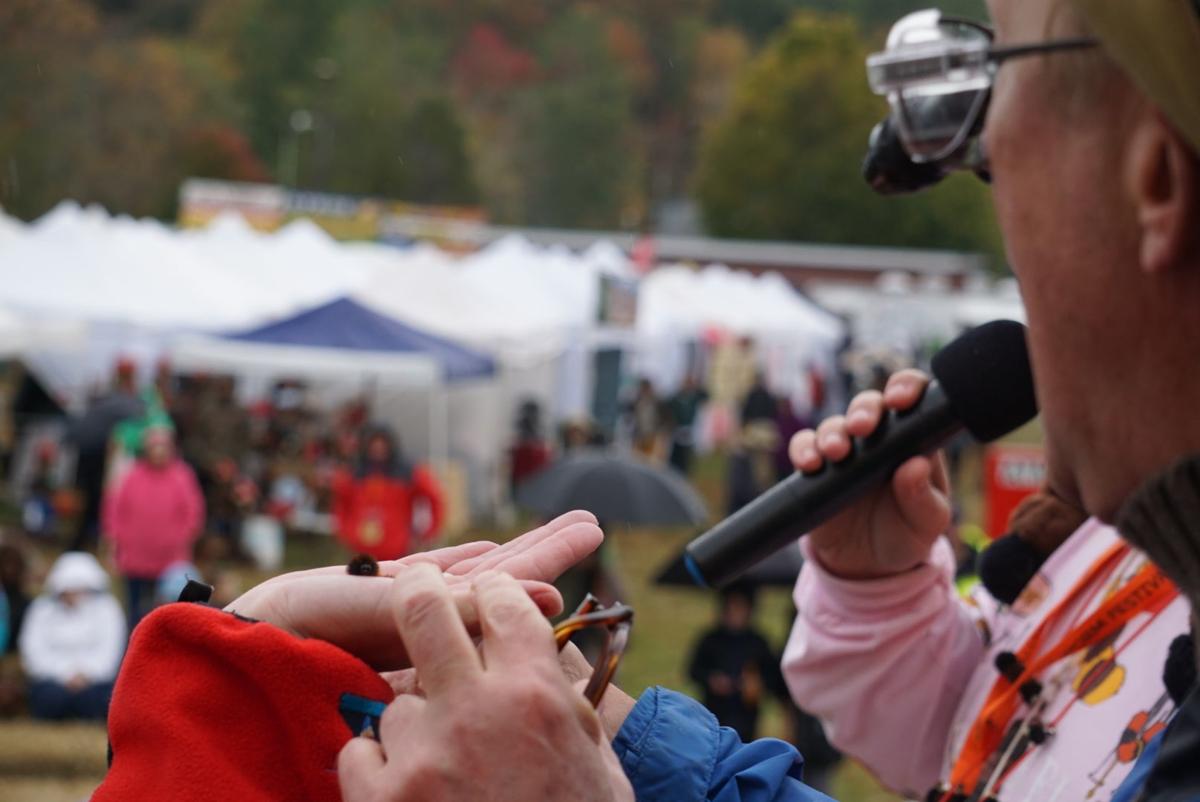 William Burrow examines the champion worm before it predicts the winter weather at the Banner Elk Woolly Worm Festival on Oct. 19. The woolly worm’s predictive power is a long-standing piece of local folklore. 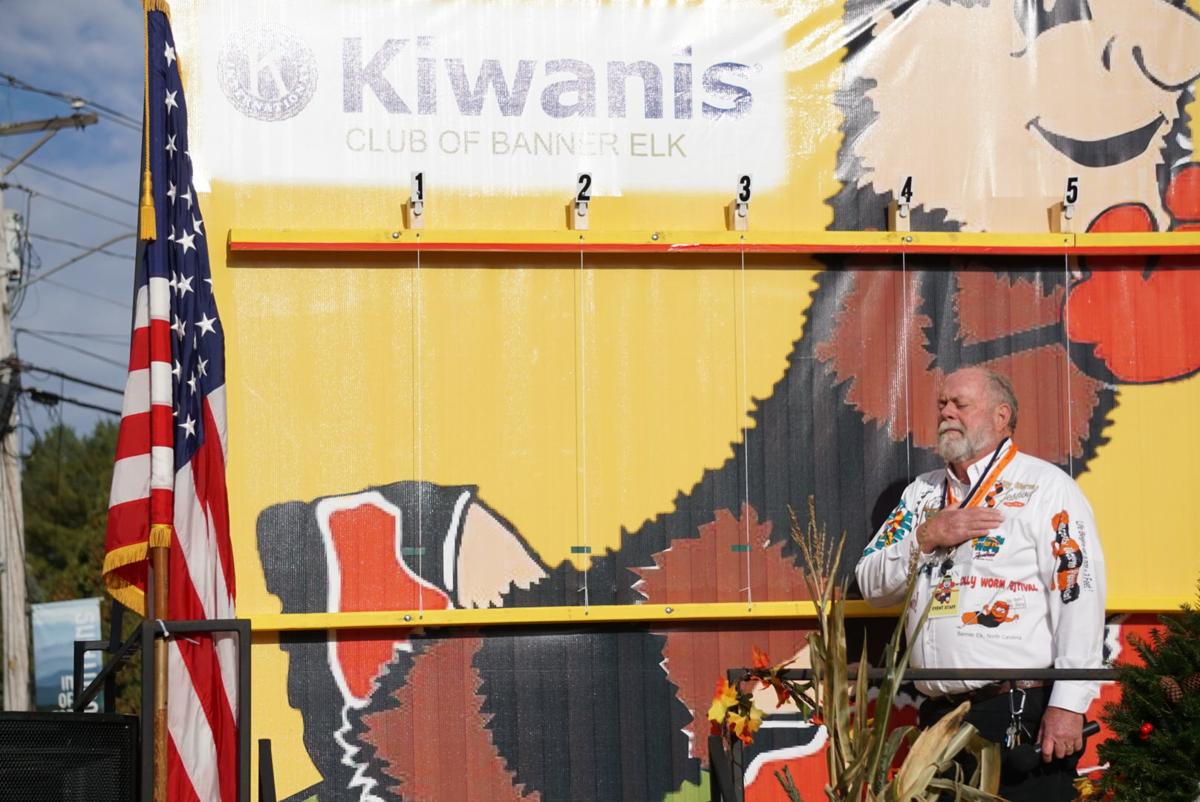 Woolly Worm Dude Jason DeWitt during the pledge of allegiance at the opening of the festival on Saturday. Oct. 19.

William Burrow examines the champion worm before it predicts the winter weather at the Banner Elk Woolly Worm Festival on Oct. 19. The woolly worm’s predictive power is a long-standing piece of local folklore.

Woolly Worm Dude Jason DeWitt during the pledge of allegiance at the opening of the festival on Saturday. Oct. 19.

BANNER ELK — “Wild Worm Will,” also known as the Usain Bolt of ascension and the killer on the string, blasted to the top of the board during the Saturday final at the annual Woolly Worm Festival to net his place in history.

The winning worm on the first day of the event, Oct. 19 in this case, always puts its name in the record books as the predicting worm for the coming winner, the strongest of the bunch.

The champion’s handler also gets to pocket $1,000 in cash, in this case Wilmington’s Leslee Brown.

Brown did not make the decision to come to the festival until the day before, but she came prepared to throw down the gauntlet for worm dominance, though she didn’t expect to win.

“I never win anything,” Brown said, adding she thinks the festival will now become an annual trip.

The official worm interpreter was local celebrity Tommy Burleson, who inspected the critter’s 13 segments, one for each week of winter, to give the county an idea of what is to come.

Burleson, who is also director of the Avery County Inspections Department, said he is glad to see the commerce from the festival coming to the area in conjunction with other events happening the same day, including Appalachian State University’s Homecoming and the annual Valle Country Fair in Valle Crucis.

After Brown’s worm crossed the finish line and it was inspected for any signs of worm-enhancing drugs by Woolly Worm Medicine Specialist Dr. William Burrow, Burleson took the fuzzy creature in hand to see what arcane secrets he could glean from its pelt.

There are four types of colors on each segment denoting different weather phenomena. The official designations for what each color means are as follows:

The buildup to the festival includes a media tour and organizing about 160 vendors to take over the grounds in front of the Historic Banner Elk School.

DeWitt’s favorite part of the festival is the fellowship.

“Everybody is in a good mood,” DeWitt said. “When the families come up on the stage they just thank us profusely for having such a great family event. It’s wonderful, it feels great.”

The event is filled with things for kids to do, with activities toward the back of the festival grounds, food and, of course, the races.

If any kid felt their worm had come down with anything, Burrow, a local dentist when he is not practicing cutting-edge caterpillar first aid, was on hand to inspect the athletes.

“We look for shading, we look to see how fast they are, we look at their eyes, (to) make sure they’re happy,” William Burrow said.

Roy Krege, an originator of the festival, longtime festival ambassador and an announcer at the event for more than three decades, likes how many people come to the festival and that the event supports two area nonprofits: The Avery County Chamber of Commerce and Kiwanis Club of Banner Elk.

“You can’t beat that,” Krege said, adding he never expected it to grow into what it is now.

The festival is a major draw to the area, bringing thousands of visitors to Banner Elk for the weekend, and all that tourism requires the help of local first responders.

“It clearly brings a lot of people into our community for the weekend,” Banner Elk Town Manager Rick Owen said, noting the economic impact it brings to the town.

More than the weather

The festival does not just bring families and commerce to the area to enjoy the day, it is also the largest fundraiser for two county nonprofits: The Avery County Chamber of Commerce and Kiwanis Club of Banner Elk.

The chamber supports local business, and Kiwanis’ mission is to help children in the county. The funds raised at the event are split between the two organizations.

Mae Weed, the recently appointed President of Kiwanis Club of Banner Elk, said the festival takes in between $30,000 and $50,000 for the club. That money gets redistributed by Kiwanis through grants and supporting programs that directly support children.

Last year, an overnight wind storm forced the organizers to close the festival on the second day, but this year both days came and went without incident.

”With decent weather we generally do extremely well,” Weed said.

There are other groups that benefit from the festival as well. Banner Elk Elementary School sells woolly worms and woolly worm cages at the festival to raise money for its PTO.

Principal Justin Carver said the PTO is fundraising for more arts integration at the school this year and is coming off the school’s recent fall festival.

A number of groups sell parking spaces for the event as well. One of those is the local food pantry Feeding Avery Families.

FAF distributes hundreds of thousands of pounds of food to local families each year, and they are allowed to sell parking spaces on an empty private parcel next to Banner Elk Town Hall at the festival.

Executive Director Dick Larson said two years ago the nonprofit managed to raise $5,600 from the event, though the weather last year reduced their intake.

The festival will return next fall for another round of worm races and another prediction.