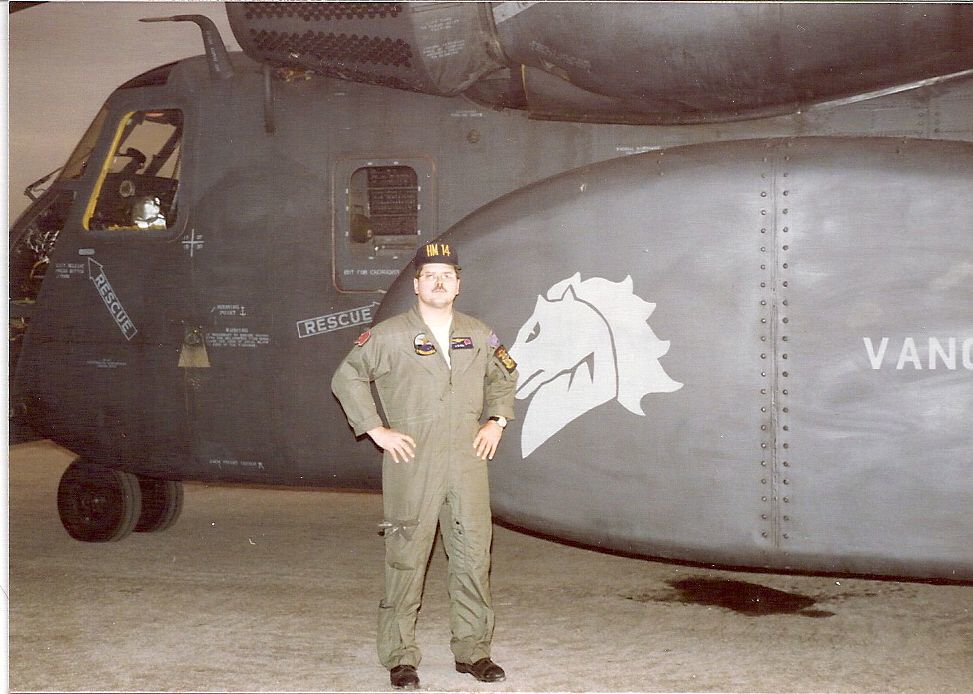 David Hill is pictured after flying into Kuwait after a ceasefire had been signed during the Gulf War. 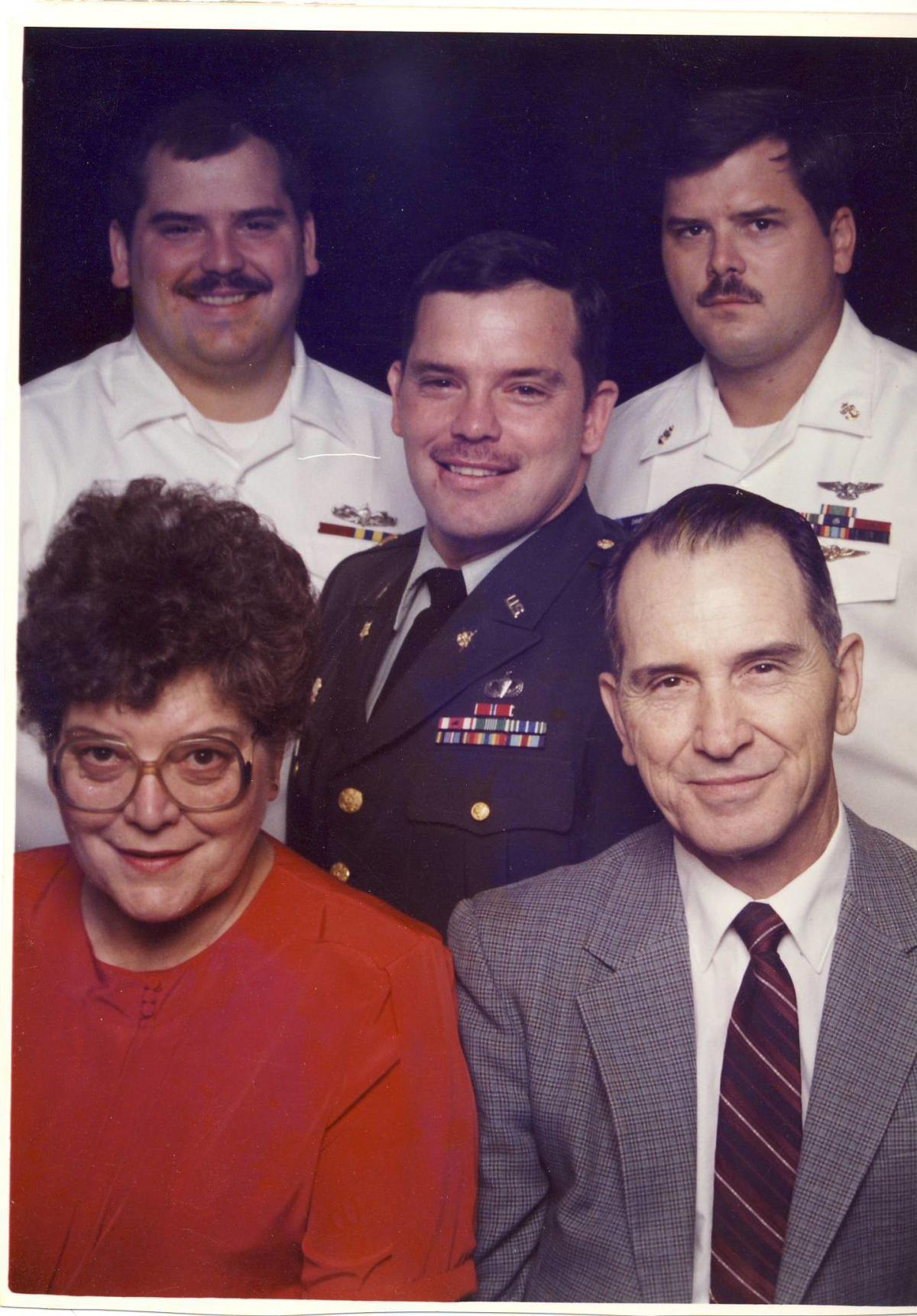 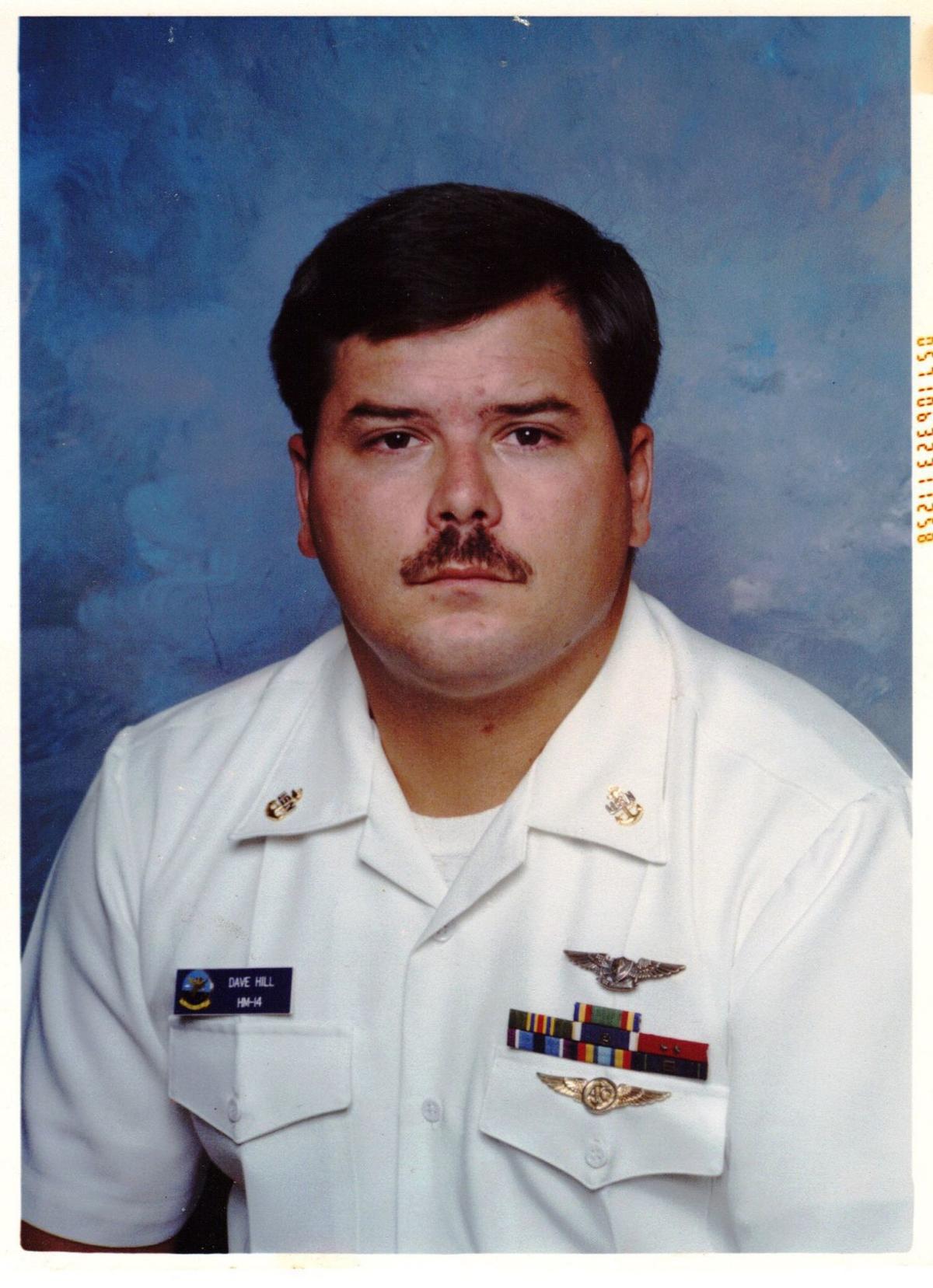 David Hill is shown here as a Fleet Airborne Mine Countermeasures crewman and Maintenance Control Chief Petty Officer during the First Gulf War. 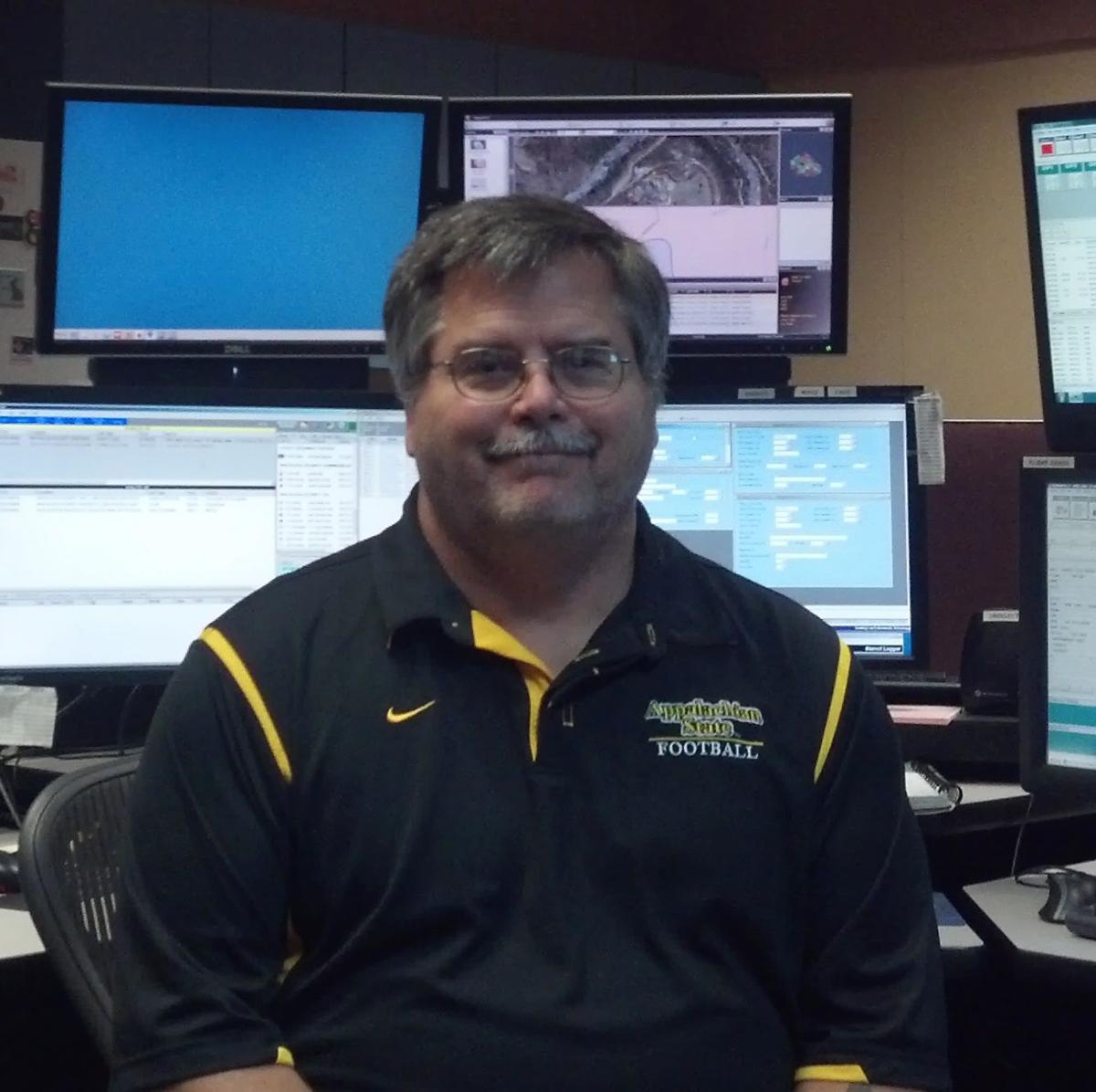 David Hill works as a telecommunicator for Watauga County Communications. 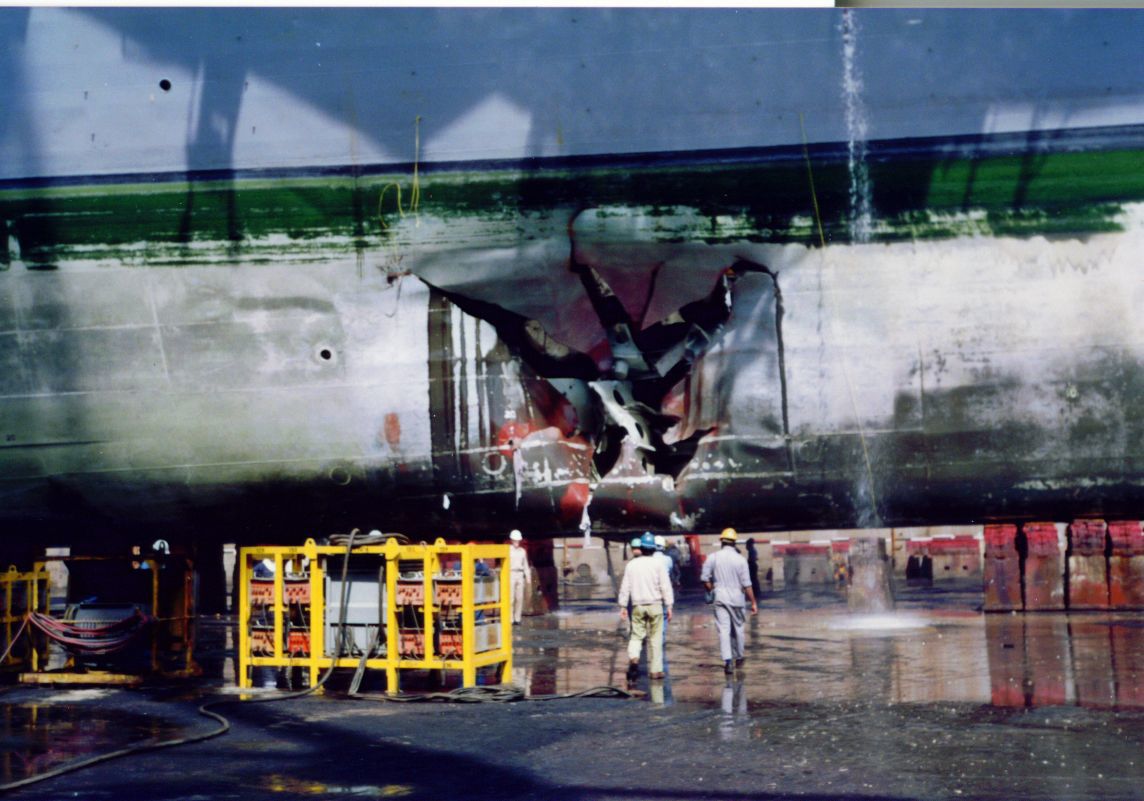 A U.S. Naval ship sustains damage after encountering a mine in 1991.

David Hill is pictured after flying into Kuwait after a ceasefire had been signed during the Gulf War.

David Hill is shown here as a Fleet Airborne Mine Countermeasures crewman and Maintenance Control Chief Petty Officer during the First Gulf War.

David Hill works as a telecommunicator for Watauga County Communications.

A U.S. Naval ship sustains damage after encountering a mine in 1991.

If a person has placed an evening 911 call in the past 20 years, it potentially could’ve been David Hill who picked up the phone to help in the time of need.

Hill, a Zionville resident, plans to retire in January after working with Watauga County Communications for approximately 21 years. Hill is one of the county’s telecommunicators that answers the phone when someone places a 911 call. Telecommunicators are trained to stay calm in time of panic to help get a citizen the help they need, and Hill often times is the first voice someone hears in a time of crisis.

“I really enjoy the aspect of public service where you can do things that make a difference for people,” Hill said. “I’ve enjoyed it. Not everyone can say that they’ve saved lives and done things that help people out. It’s always been a great chance for me to help out the community.”

Public service has always been a passion for Hill, as he served 22 years in the United States Navy. He joined the Navy in 1976 and retired as a chief aviation electronics technician in 1998. His first time flying in an airplane was on his way to bootcamp in Orlando, Fla., he said.

When David Hill enlisted in the military, he had completed a few years of school at Appalachian State University and was part of the ROTC program. He decided to leave school to join the Navy for its electronics program. He served on several deployments, spent four to five years at sea and was part of an aviation squadron.

Hill served during the operations Desert Shield and Desert Storm of the Gulf War. He recalled when he was working a night shift aboard a ship when it struck a mine in the Persian Gulf in 1990.

“It was scary,” Hill said. “You don’t know what’s happening. It was one of those deals where you don’t know how bad you’re hit ... You get into the mode where you try to make sure nobody’s hurt.”

Hill said the ship sustained damage from the blast, and he was able to keep a piece of the metal from the wreckage after it was repaired.

Hill said he has been awarded the Sikorsky Helicopter Rescue Award for a Lifesaving Mission in Sikorsky Aircraft and was also promoted to chief petty officer in 1986. When Hill exited the military in 1998, he was transferred and placed on a 10-year fleet reserve status in case he was called upon again for deployment. Once out, he moved back to Watauga County.

Hill and his family moved to Watauga in 1970 from northern Virginia. He said since his father served in the Navy, the family moved around. Around 1967-68, Hill said his family had broken down on the Blue Ridge Parkway after visiting Cherokee and his dad was impressed by the 30 or so people who stopped along the road to offer help.

“My dad said, ‘This is where we’re going to live,’” Hill said. “A few years later he bought our farm and we moved here.”

Hill attended Watauga High School, participated in football, wrestling and baseball and then graduated in 1974. When he returned to Watauga County, he briefly worked at Highland International of Boone making paint, and was later hired by former Watauga County Sheriff Red Lyons at the communications center in 1998.

Not too long before Hill started working for Watauga County Communications was when a new 911 system had been developed to track where a call was coming from. Before then, a telecommunicator would just have to know where people lived in the county, he said. With the help of cellphones, Hill said it’s now easier to plot where a call is coming from to ensure emergency services are dispatched to the right location.

While still working in communications, Hill re-enrolled at App State in 2001 and graduated four years later with a Bachelor of Science degree in community and regional planning. He has served several years on the Watauga County Board of Adjustment and will complete his time on the board in December.

Among the highlights for Hill as a telecommunicator has been helping to locate missing people by using maps and technology, he said. He’s helped give life-saving instructions to callers — like CPR — and tried to keep people calm during tense situations, he said. But, he said it’s a team effort with the help of other telecommunicators and first responders to successfully dispatch a call.

Hill said sometimes it can be tough to remain composed when taking a 911 call.

“There’s a palpable nervousness when that phone rings,” Hill said. “You don’t really know what’s going to be at the other end of it.”

Hill said he was working the night in July 2012 when WCSO Deputy William Mast was shot after Mast responded to an open line 911 call. Hill said he tries not to dwell on the situations he’s encountered as a dispatcher, but that situation was definitely a “low point” in his time there.

After 21 years in the business, Hill said he’s ready to retire and move on to the next venture.

“As long as I’m able to do something, I’ll probably bounce around and find something to do — probably some kind of service work to help folks out when I can,” Hill said.

Outside of work, Hill said he likes to tinker with plastic models, look after his three dogs and spend time with his wife and family.

If my Navy vessel were to hit a land mine, I would be having a heart-to-heart with my navigator. [beam]