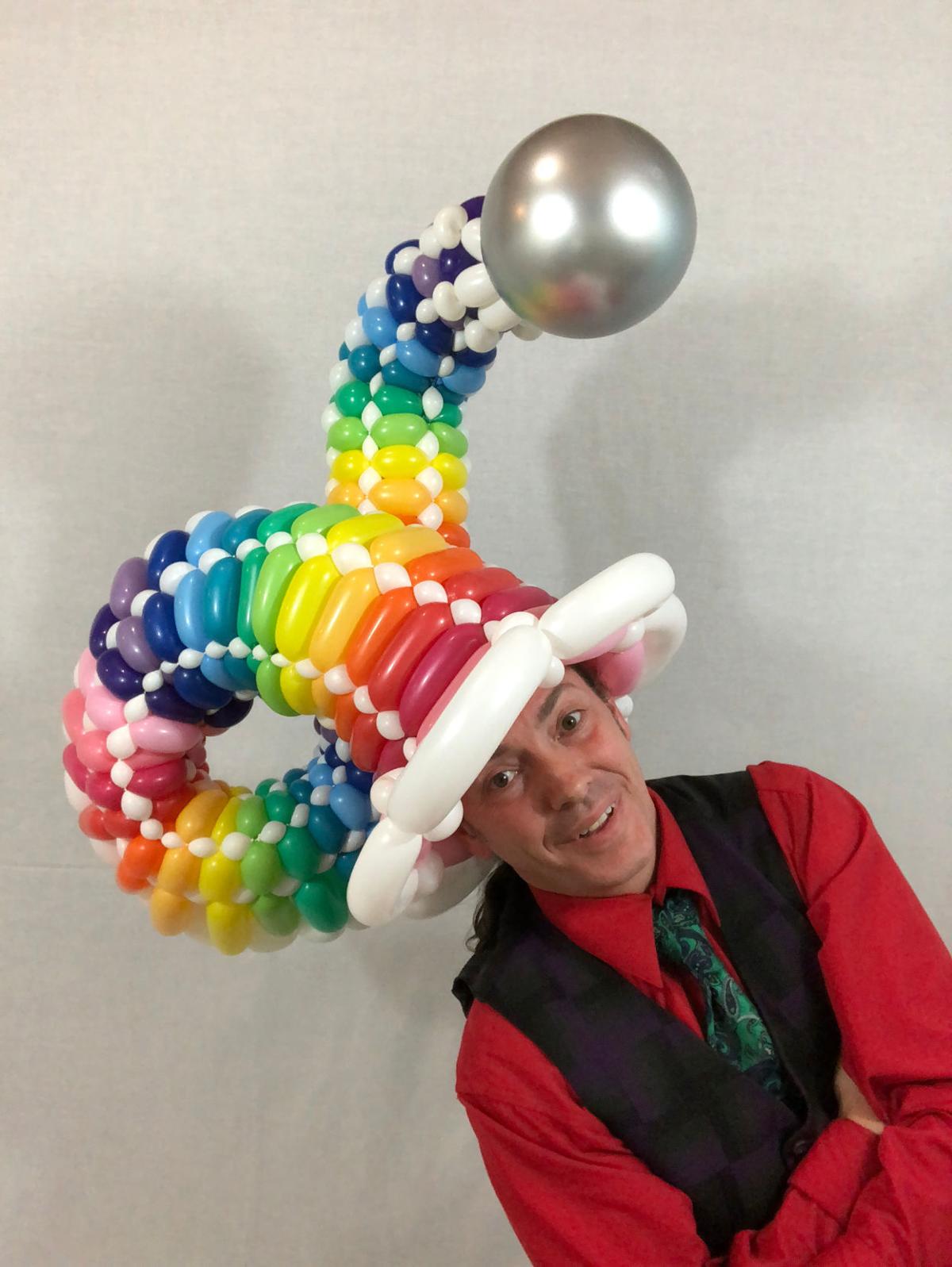 Twist the Balloon Man, pictured here, is based out of Morganton and creates decorations, superheroes, characters, hats and more out of balloons across Western North Carolina. 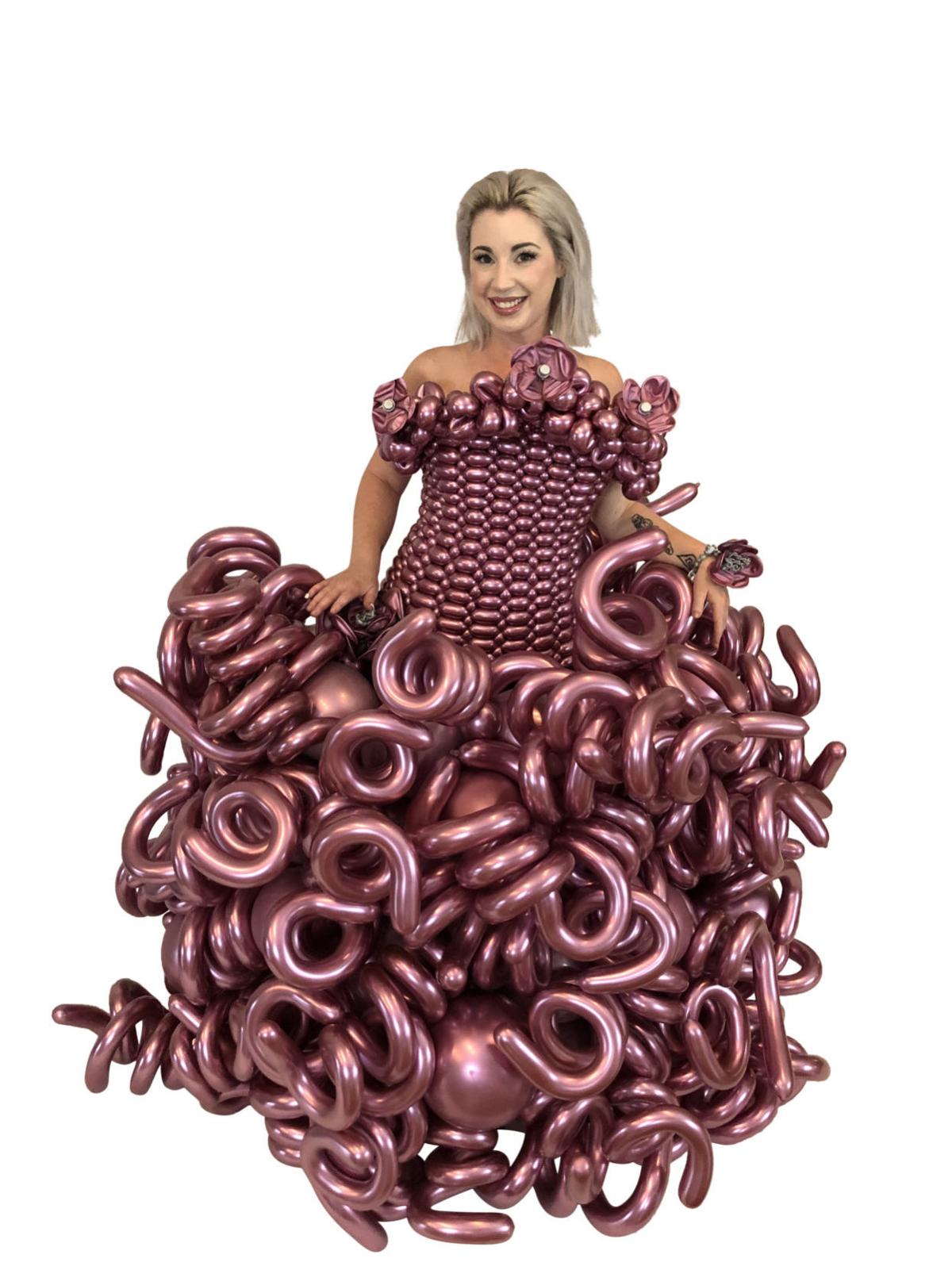 This mauve gown created by Twist the Balloon Man, modeled by Christina Dawn, tied for third place in a worldwide competition for chrome mauve balloon creations put on by Qualatex. 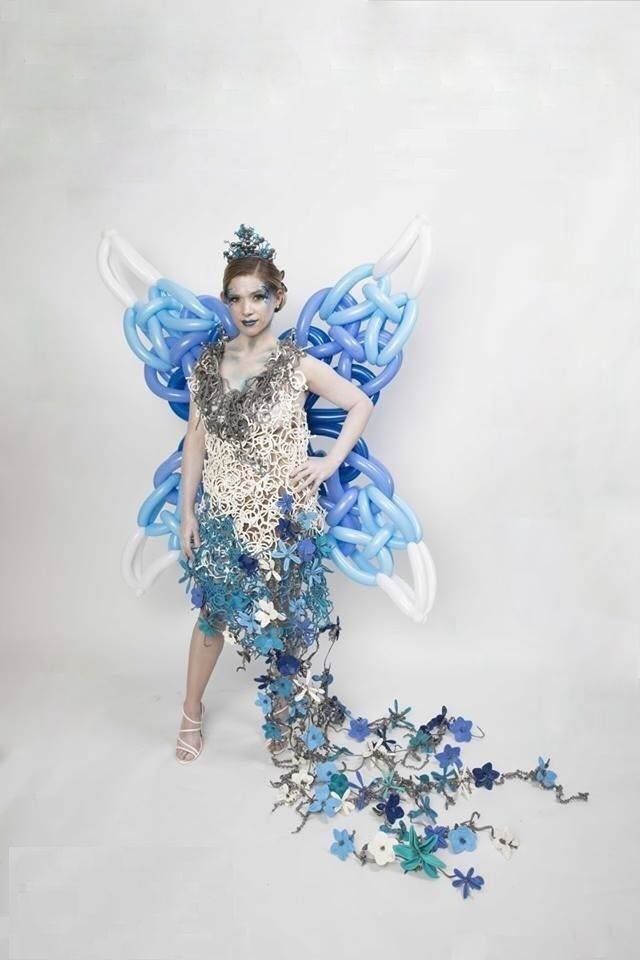 Gowns and dresses, such as the fairy dress pictured on model Angela Fodor Munsell, are favorites of Twist the Balloon Man. 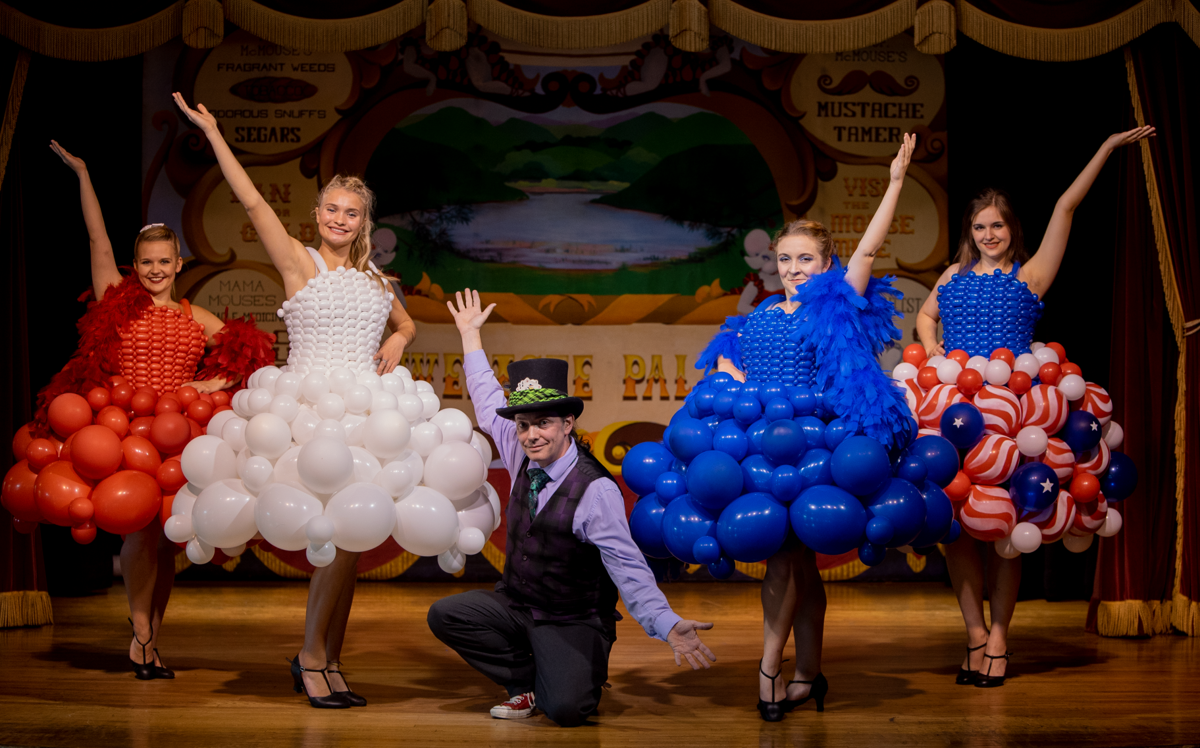 Twist the Balloon Man, center, shows off four of his balloon dress creations at Tweetsie Railroad.

Twist the Balloon Man, pictured here, is based out of Morganton and creates decorations, superheroes, characters, hats and more out of balloons across Western North Carolina.

This mauve gown created by Twist the Balloon Man, modeled by Christina Dawn, tied for third place in a worldwide competition for chrome mauve balloon creations put on by Qualatex.

Gowns and dresses, such as the fairy dress pictured on model Angela Fodor Munsell, are favorites of Twist the Balloon Man.

Twist the Balloon Man, center, shows off four of his balloon dress creations at Tweetsie Railroad.

If you attend a special event at Appalachian State or the Jones House and see a large balloon creation, be it an archway, pillars or superheroes, it’s likely the work of Dylan Rowe, more commonly known as Twist the Balloon Man.

Rowe’s talents with making characters from balloon animals are known to the region, from events at Chick-fil-a of Boone to Sundays at Bank of America Stadium in Charlotte for the Carolina Panthers.

“It’s the coolest job in the world; I get to make people happy for a living,” Rowe said. “When a kid comes up and wants a special character, a pet dog, pet cat, Mickey Mouse, Buzz Lightyear or something else and they get to see me make it, you get to see their faces light up. You give them that moment of joy and happiness, make their day and they always remember that.”

Recently, Rowe received international attention for his work as he placed in a tie for third in Qualatex’s Chrome Mauve Color Quest contest for a gown he made.

According to Rowe, Qualatex, a balloon manufacturer based out of Wichita, Kan., holds annual competitions for different colors in which the artists have to feature that color in their creation.

“I love making balloon dresses,” Rowe said. “I was really, really excited. People tell me I should have won first, and it was my first time competing. I was excited for it being a worldwide competition. It meant a lot, when I look at myself and see that I’m ranked third.”

Rowe was the highest-placed American artist, with first and second place won by artists from Japan. Rowe was tied for third with artists from Yokohama, Japan and Moscow.

The contest showed off a lifetime of work that for Rowe, began at a young age while living in London.

“I’ve always had a fascination with magic,” Rowe said. “I tried to run away to the circus at age 8 and was promptly returned to my parents and told that people haven’t actually run off to the circus for decades.”

Summers for Rowe consisted of going to camps and learning how to juggle, making balloon animals and performing close-up magic.

After performing all over the world, Rowe moved to Morganton 15 years ago from England and went about trying to apply his skills to make a living.

“Tweetsie was my first big entertaining job in America,” Rowe said. “I needed a day job and saw an ad in the local newspaper.”

His Tweetsie job interview, Rowe recounted, was making cowboys, American Indians and a ferris wheel out of balloon animals. Even though Tweetsie hadn’t had a balloon twister before, Rowe was hired.

“We are very excited for Dylan and his well-deserved recognition,” Tweetsie spokesperson Meghan Minton said. “We have been fortunate to have someone with his talents work at Tweetsie Railroad for over 10 years. In the past two years, Dylan has designed and created unique balloon costumes to help promote some of our special events here at Tweetsie Railroad, including Fourth of July and Tweetsie Christmas. He is a delight to work with and our guests thoroughly enjoy interacting with him during the magic show.”

Rowe has worked as an entertainer at Tweetsie for 10 years. During that time, he became a balloon twister for Appalachian State University.

“Any balloon decoration for (ASU), that’s me,” Rowe said.

Nowadays, Rowe also does work for Wake Forest University in Winston-Salem, the NASCAR Hall of Fame and Charlotte Motor Speedway in Charlotte, Western Carolina University in Cullowhee and other organizations.

“Sometimes I drive up to ASU in Boone, leave to go to Winston-Salem for Wake Forest, go down to Charlotte or a party or festival and drive back (to Morganton),” Rowe said.

"Twist is in a category all his own, said LeAnn Gregory, culture director of the Chick-fil-A of Boone. "No one else can bring magic to an event like he can. He was the highlight of our Daddy Daughter Date night this year and it seemed there was nothing a child could dream up that he could no create."

Going forward, Rowe is looking forward to the World Balloon Convention, hosted by Qualatex, in Orlando, Fla., in March 2021.

Rowe attended the 2018 World Balloon Convention in San Diego, Calif., on a scholarship from Qualatex, taking in different techniques and creations from balloon artists from all over the world.

“It’s a solitary life, you work from home, then start decorating whenever needed,” Rowe said. “There (at the World Balloon Convention), you’re surrounded by hundreds of artists from 50 different countries. You absorb everyone’s different techniques. It was an amazing honor to be given the scholarship to go.”

Locally, Twist the Balloon Man will appear at ASU for Homecoming activities on Oct. 18-19, then at the Jones House on Oct. 30 for Boone BOO!

“I like to think I’ve made a lot of joyful moment and that I’ve made a difference,” Rowe said.