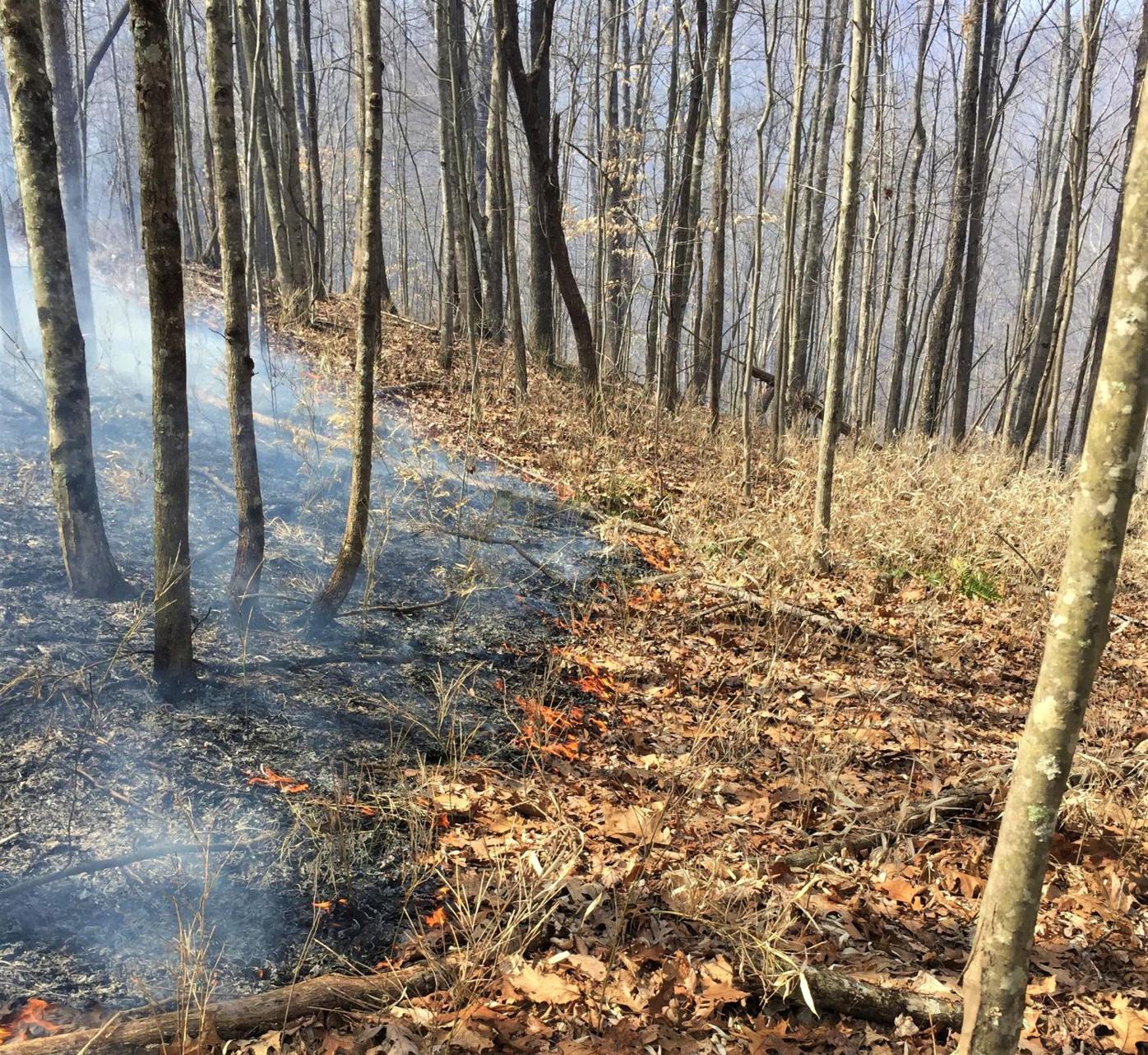 A controlled burn moving down a slope in western NC. — Notice the brown grass-like plants on the right of the photo. This is hill cane, Arundinaria appalachiana, a fire dependent woody bamboo species native to the NC mountains. Hill cane, and the animals that depend on their habitat are decreasing without fire. This area was previously burned recently and the hill cane is reestablishing on this slope. 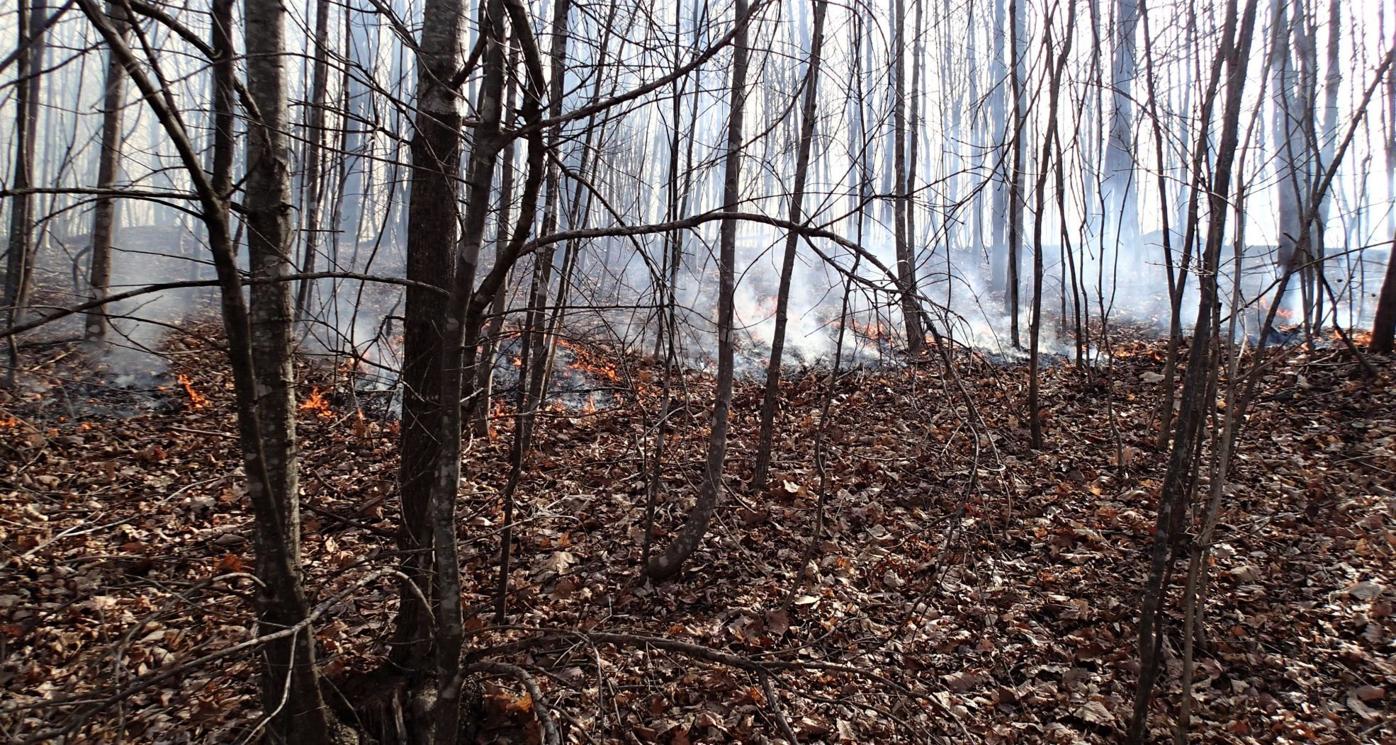 A low-intensity fire slowly backing down a hill through a red maple stand. This fire was part of an interagency controlled burn that removed plant debris, reducing the threat of severe fire. It also removed some of the small trees and provided open space for fire dependent species and improved forest health and resilience.

A controlled burn moving down a slope in western NC. — Notice the brown grass-like plants on the right of the photo. This is hill cane, Arundinaria appalachiana, a fire dependent woody bamboo species native to the NC mountains. Hill cane, and the animals that depend on their habitat are decreasing without fire. This area was previously burned recently and the hill cane is reestablishing on this slope.

A low-intensity fire slowly backing down a hill through a red maple stand. This fire was part of an interagency controlled burn that removed plant debris, reducing the threat of severe fire. It also removed some of the small trees and provided open space for fire dependent species and improved forest health and resilience.

Wildland fire has been part of the forests of eastern North America and Western NC for thousands of years. They occur naturally from lightning strikes, and native Americans used wildland fire as a tool to reduce severe fire and to maintain productive forests. These fires would generally have been frequent and very low in intensity.

Historically, forests in Western NC would have had many more plants and ecosystems that tolerate or depend on wildland fire. There would have been more open areas with native grasses, and fire-adapted species such as hickories and oaks. There are several threatened plant and ecological communities in Western NC such as hill and river cane, table mountain pine and mountain golden heather that depend on fire, and without fire will likely continue to decrease.

Without fire, fire-sensitive, shade-tolerant, water-loving plants such as red maple, rhododendron and tulip poplar outcompete fire dependent species such as oaks that need forest openings and sun for their seedlings. This triggers a positive feedback cycle, known as mysophication, in which the closed canopy forests continually improve the conditions for fire sensitive/water loving species and deteriorates the habitat for fire-tolerant species. Because of this, ecological communities in Western NC are currently undergoing rapid changes. Species diversity within forests are declining, and will decline further, as numerous fire adapted plants are replaced by a limited set of fire sensitive, shade tolerant species.

The USFS states that: “As this process (mysophication) continues, the effort and cost required to restore fire-adapted ecosystems escalate rapidly.” Historically fire sensitive species would have lived along streams, and in shady coves with very moist soil, now these species often dominate on drier, well drained ridges, and even on steep south facing slopes.

Fire-sensitive species generally use more water than fire-tolerant species, particularly in the summer. This pulls more water out of the ground and lowers the water table. Less ground and soil water results in lower stream levels and alters the water chemistry. A change in forest structure and diversity affects wildlife that depend on the nut crops from oaks and hickories and the habitats created by fire dependent plants and trees. A less diverse forest is a less resilient forest and is more susceptible to disease, pests, invasive pathogens and plants, drought, extensive heat, and other disturbances that can kill trees.

Many years of wildland fire suppression has increased forest density and allowed for woody debris (fuels) to build up. These factors, paired with increasing drought and temperatures means when uncontrolled wildland fires now occur, they are often much more severe than they historically would have been.

“Lack of consistent fire in the region has left our forest with dangerous fuel loadings that could contribute to extreme fire behavior. We witnessed this particularly in the fall of 2016. The N.C. Forest Service can conduct hazard reduction burning at no charge. If interested, contact your local county NCFS ranger,” Yancey County Forest Service Ranger Frank Blankenship said. You can find your local ranger at NCforestservice.gov.

The NCFS and USFS now understand that wildland fire is important for forest health and these agencies take a different approach with wildland fire. This includes helping landowners understand wildland fire, assisting in improving the forest ecology, and reducing the threat of destructive wildland fire by offering controlled burns or other fuel reduction programs. Many local, state, national, and global foresters, and organizations such as Blue Ridge RC&D and the Nature Conservancy also use prescribed fire as a tool to maintain healthy forests, and to reduce the threat of dangerous wildfires.

Blue Ridge RC&D is involved with a program called Firewise USA with the National Fire Protection Association and NCFS. Firewise USA is a voluntary program that provides a framework to help neighbors organize, create emergency plans, and take action to increase the ignition resistance of their homes, community, and land. If you are interested in learning more about Firewise USA you can reach out to Blue Ridge RC&D at hartselljonathan@gmail.com. There is information about the benefits and threats of wildland fire on the USFS website. Your local NCFS office can also be a good starting place to learn more about wildland fire.

Nature.com (journal) had an article on July 10 2019, "Frequent Prescribed Fires Can Reduce Risk of Tic-borne Diseases" Elizabeth R. Gleim, et al. Not to mention other insects and undesirables. Prescribed burns gives fauna a better chance of survival so that they can later return to continue their contribution to the balancing act. Possom for instance could possibly check what would remain of the tic population since tics are part of their diet.