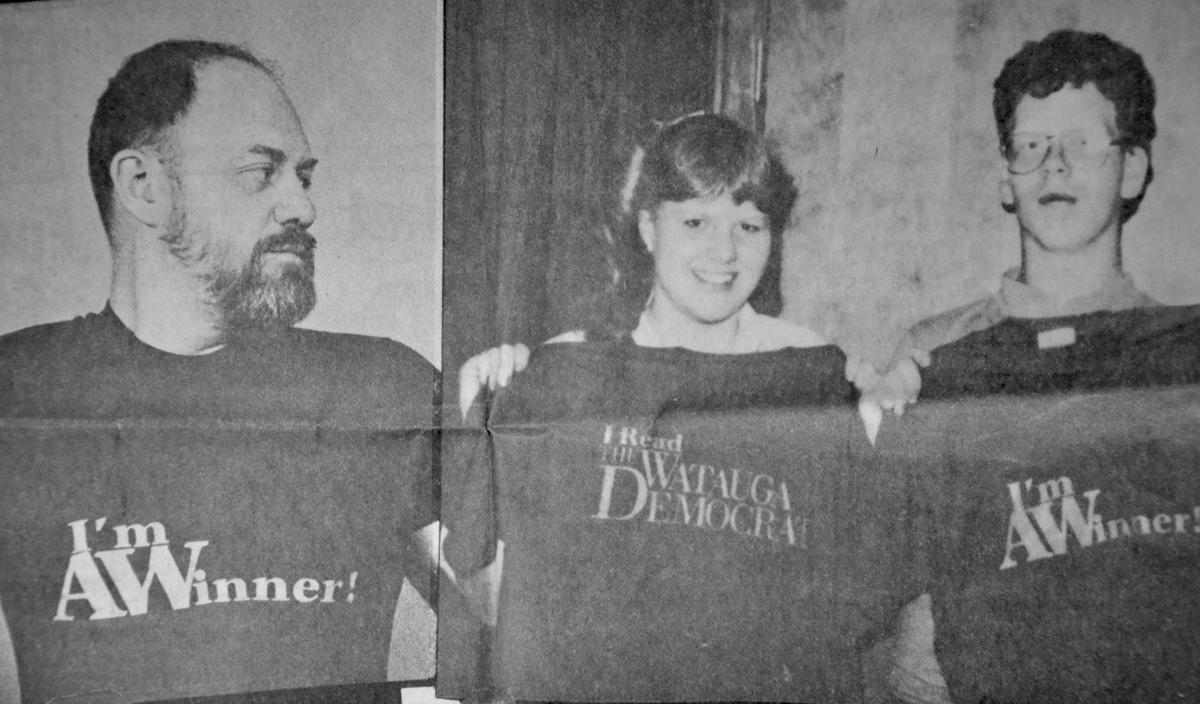 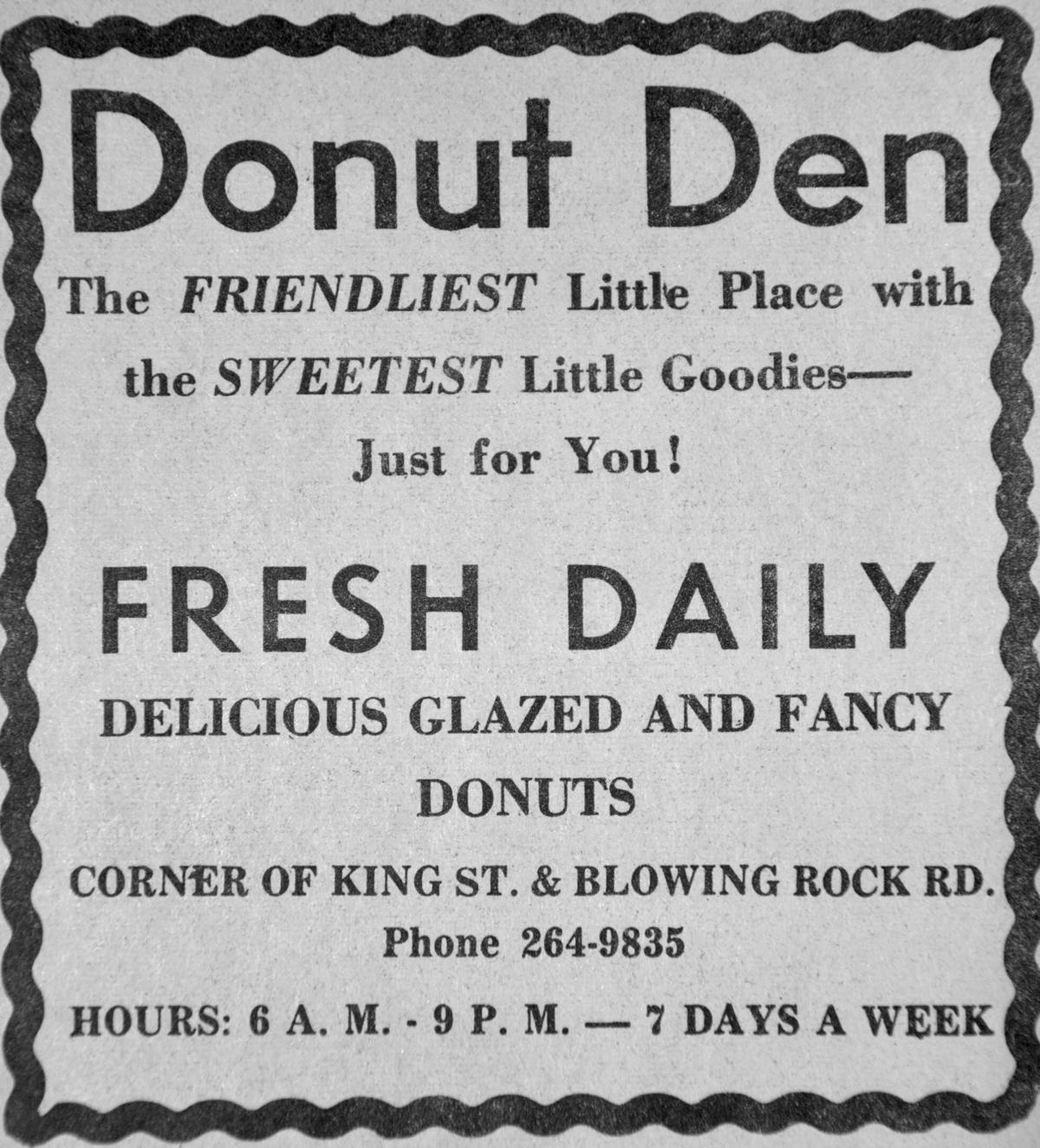 A November 1967 advertisement tells community members to buy goodies from the Donut Den in Boone. 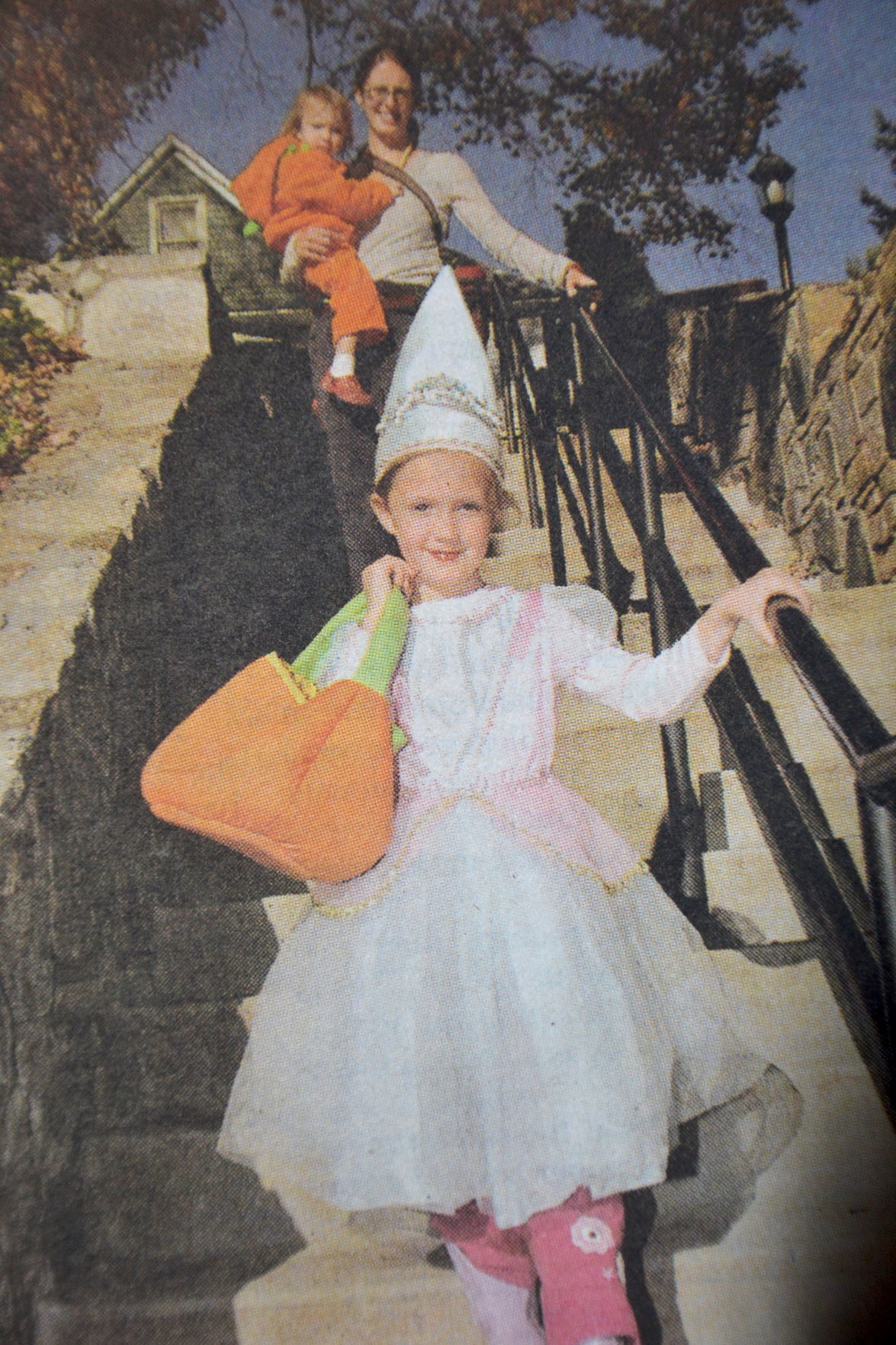 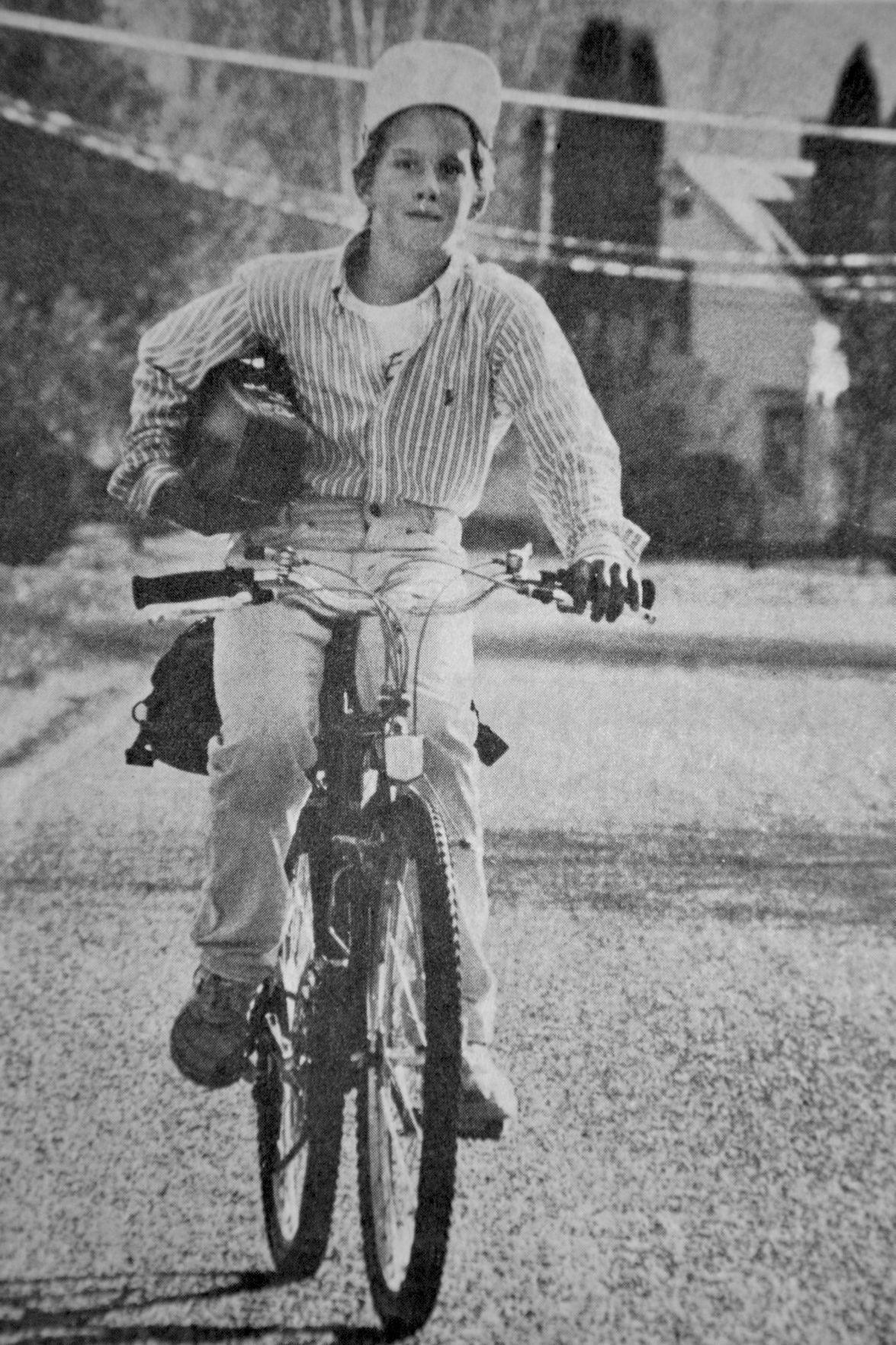 Ben Colburn, a sixth-grader at Mabel School in 1987, rides his bike after school while carrying his fiddle. 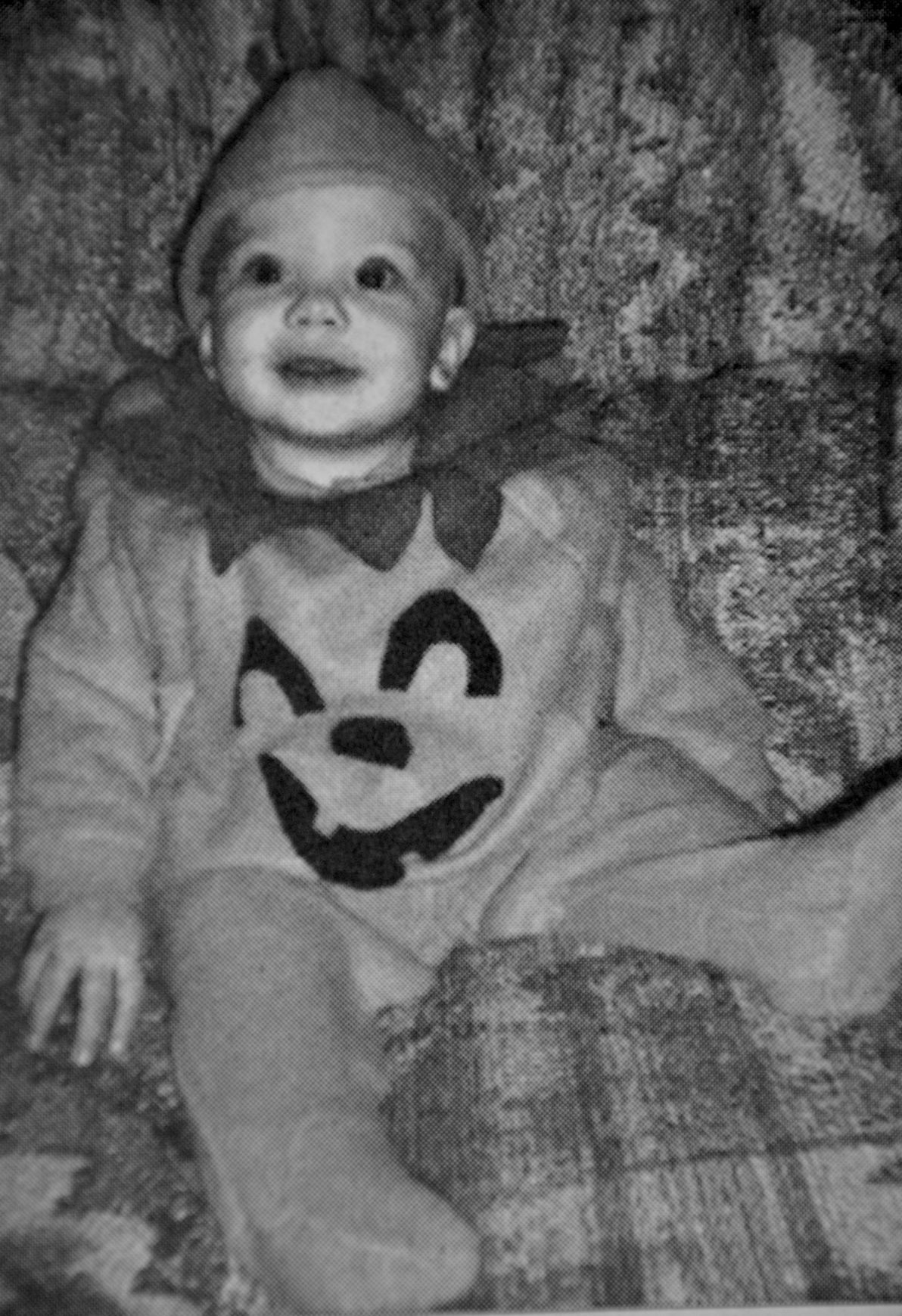 Jackie Greene dresses as a pumpkin for Halloween in 2007.

A November 1967 advertisement tells community members to buy goodies from the Donut Den in Boone.

Ben Colburn, a sixth-grader at Mabel School in 1987, rides his bike after school while carrying his fiddle.

Jackie Greene dresses as a pumpkin for Halloween in 2007.

“Shouts of ‘burn demonstrators, not draft cards’ marked the departure of seven (anti-Vietnam) war protestors from Appalachian State University Friday,” according to an article in the Nov. 6, 1967, edition of the Watauga Democrat.

“The seven college-age persons, who said they were from Nashville, Tenn., identified themselves as members of the South Student Organizing Committee and said they were on a tour to communicate their ideas on peace to college university students in the South.

“After their anti-war demonstration was stamped out by chanting (and) singing ASU students, the group had a discussion with O.K. Webb, dean of student affairs, and left campus voluntarily,” the article stated.

“The five men and two women received the brunt of North Carolina’s Speaker Ban Law, which blocked a lecture and film they had planned for a campus showing that night.

“Webb told the protestors they were in violation of two provisions of the Speaker Ban: Their appearance on campus had not been approved by W.H. Plemmons, university president; and they had no campus sponsor, according to the article. “However, Webb granted them permission to set up a table in the Plemmons College Center for disbursing literature and talking to students.”

“When they began passing out material which denounced U.S. involvement in the war, several hundred ASU students began screaming at the SSOC members, grabbing all of their literature and taking the table. Cries of ‘throw them out’ ... echoed across the Mountaineer campus before the war protestors left the student center,” according to the article.

“Every rented dwelling in Boone, by law, must have an automatic smoke detector, according to the town’s fire and building inspectors,” stated an article in the Nov. 2, 1987, edition of the Watauga Democrat.

“Under legislation ratified by this year’s General Assembly and an ordinance passed by the Boone Town Council in July, all Boone rental residential dwellings constructed prior to Jan. 1, 1975, must be equipped with the devices.

“Boone is one of three municipalities in the state which has laws requiring smoke detectors in all rental residences. Blowing Rock also has such an ordinance,” according to the article.

“(Neil Hartley, Boone’s superintendent of inspections) along with Boone Fire Marshal Ronnie Marsh and building inspector Roland Jones are responsible for inspecting residents to make sure smoke alarms are in place.”

“Hartley estimated that there are 2,500 apartments and condos in Boone and that 1,000 to 1,500 of these were built before 1975, and therefore, fall under the new ordinance,” the article stated.

“The former mayor, state senator and member of the N.C. House of Representatives was also the supporter of a number of local civic efforts,” the Nov. 2, 2007, article wrote about Brown. “He served as Boone mayor in the 1960s and was a key player in the development of Boone Golf Course. The golf course was established by Brown in 1959, and the next year became the site of one of the first ski areas.”

The article stated that Brown also was active in the development of the Watauga Medical Center and the “Horn in the West” outdoor drama.

“Brown says his biggest achievements have been his efforts in helping the county acquire the hospital facilities and helping get a golf course here,” stated the Nov. 5, 2007, article.

The Nov. 5, 2007, article also stated that Brown passed the State Bar Exam in 1930 while attending law school at Wake Forest University. He opened a law office in Boone in 1931. The article included information on Brown being a charter member of the Boone Lions Club, the Boone Area Chamber of Commerce and the Boone Merchants Association. He also served as a trustee for Appalachian State University and Wake Forest University.