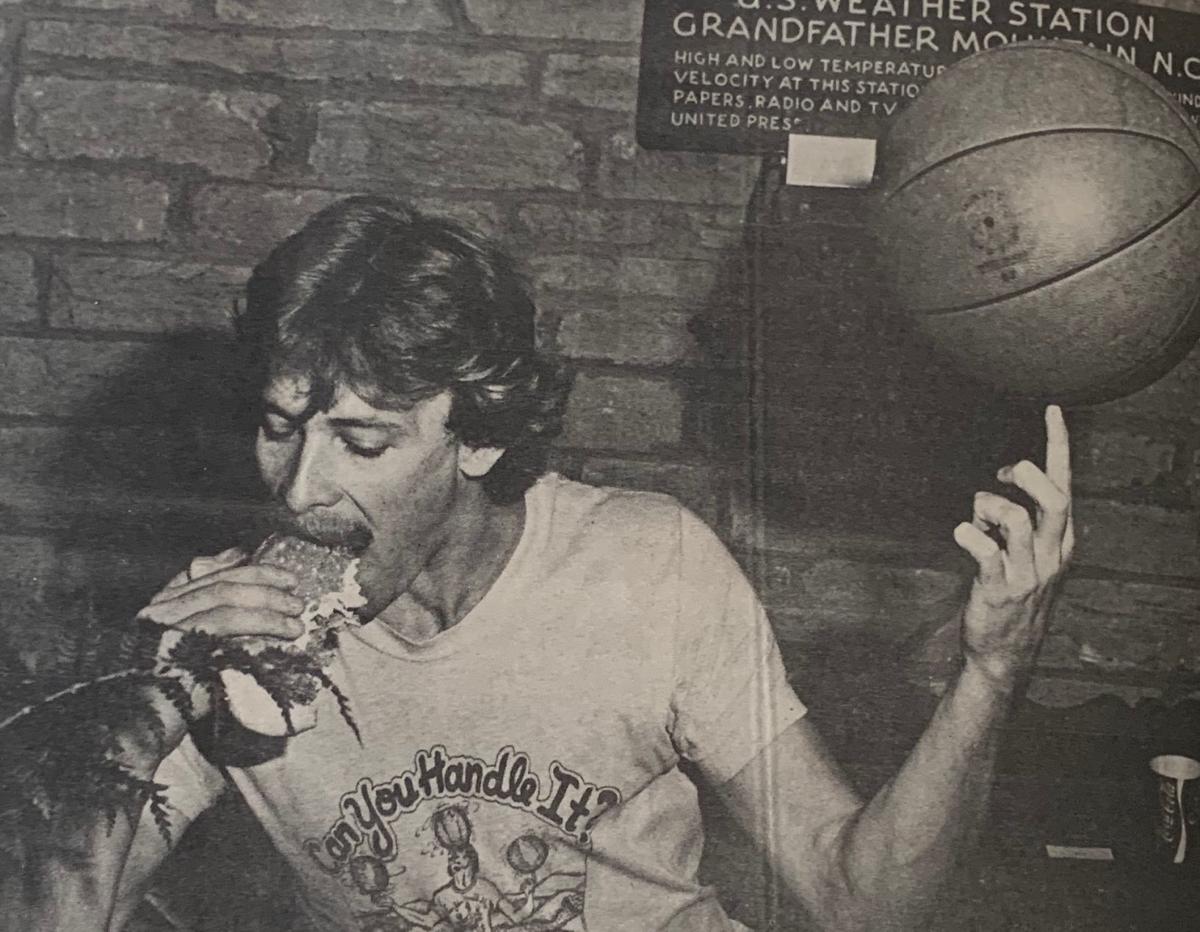 Carl Clayton eats a hamburger while spinning a basketball on his finger in 1979. 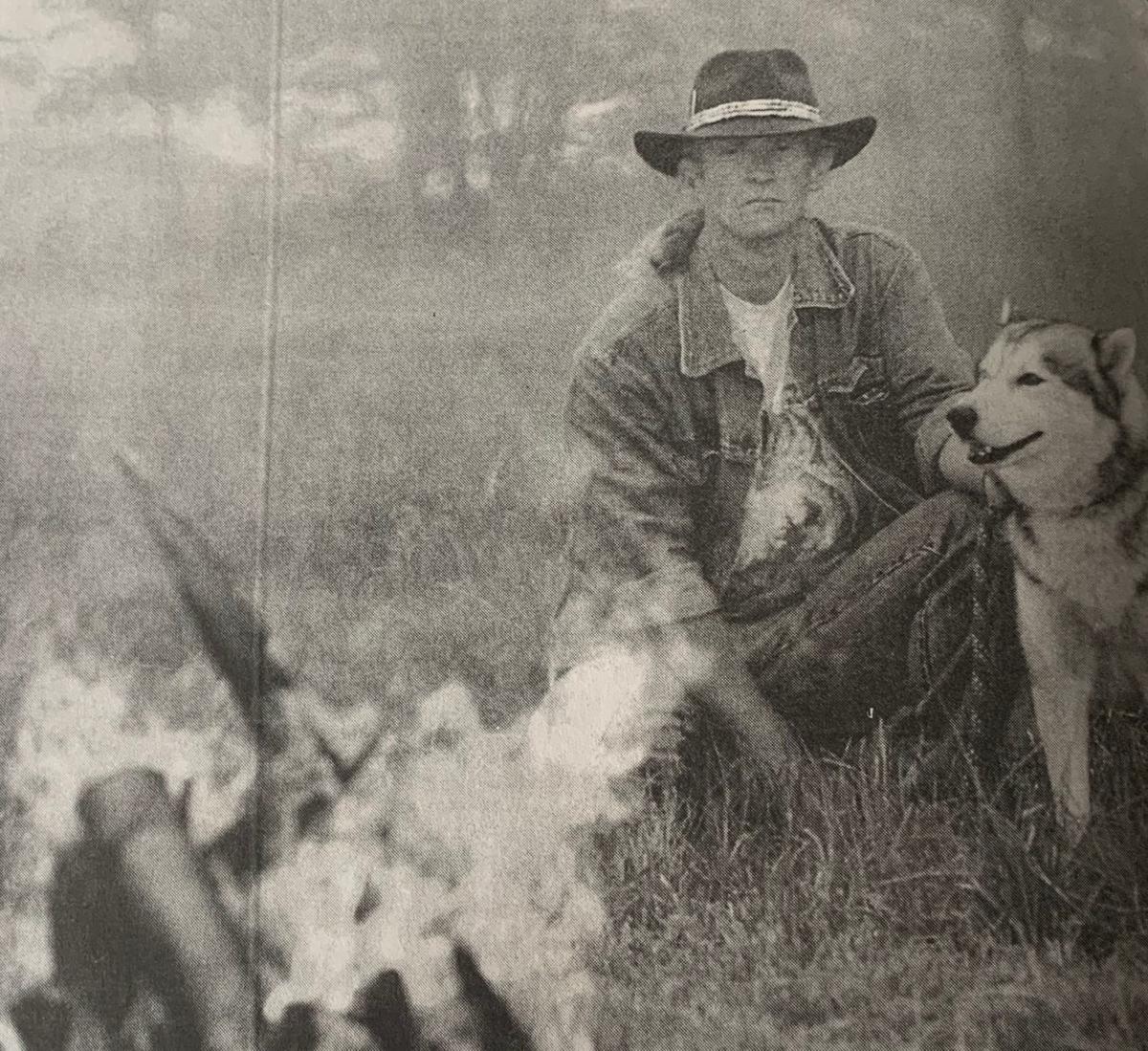 Steve Clark, wolf breeder, and his pet wolf, Timber, stare into a fire while camping in cool mountain temperatures in 1999. 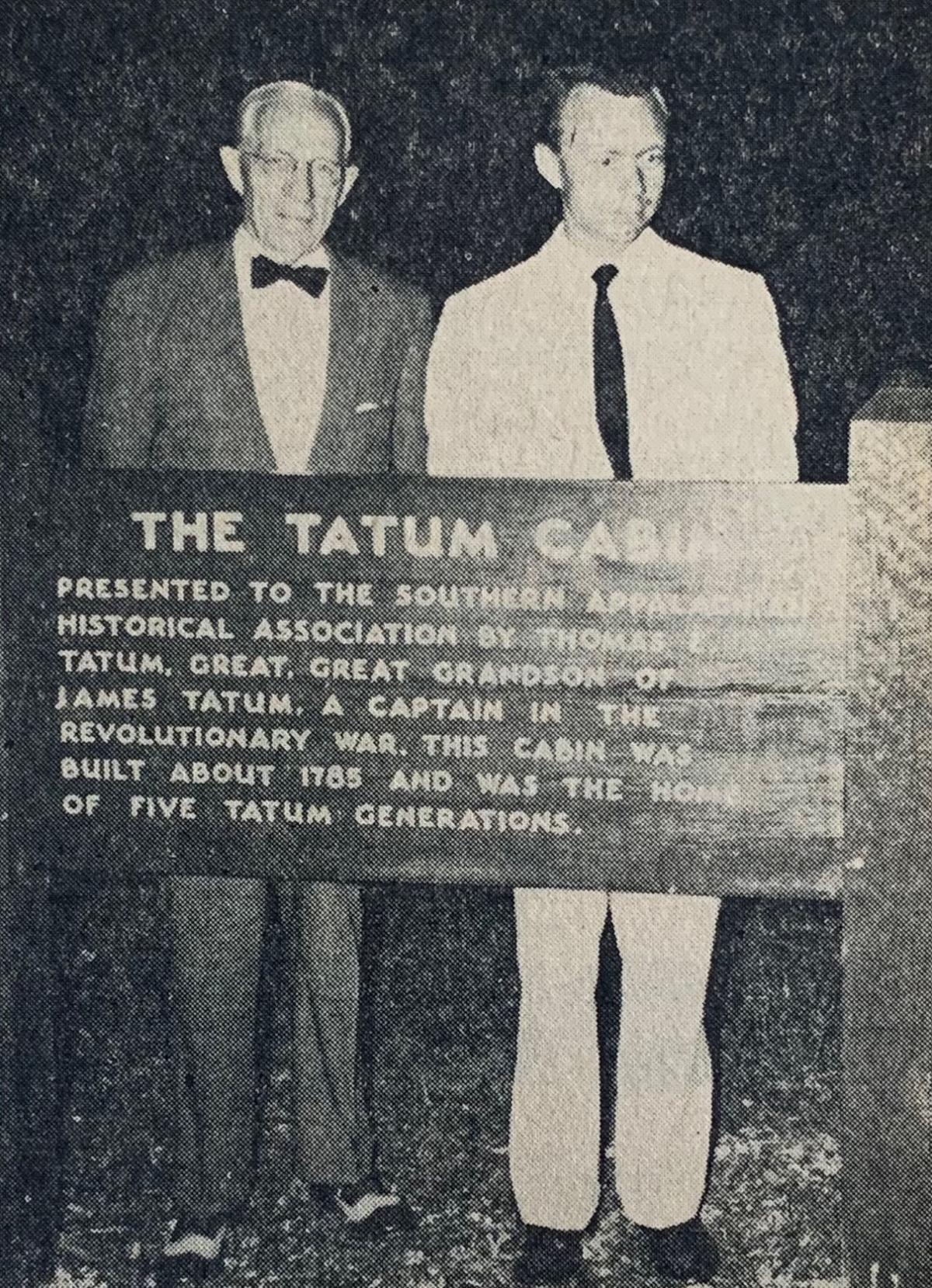 I.G. Greer and W.S. Tarlton pose at Tatum Cabin following the dedication in1959. 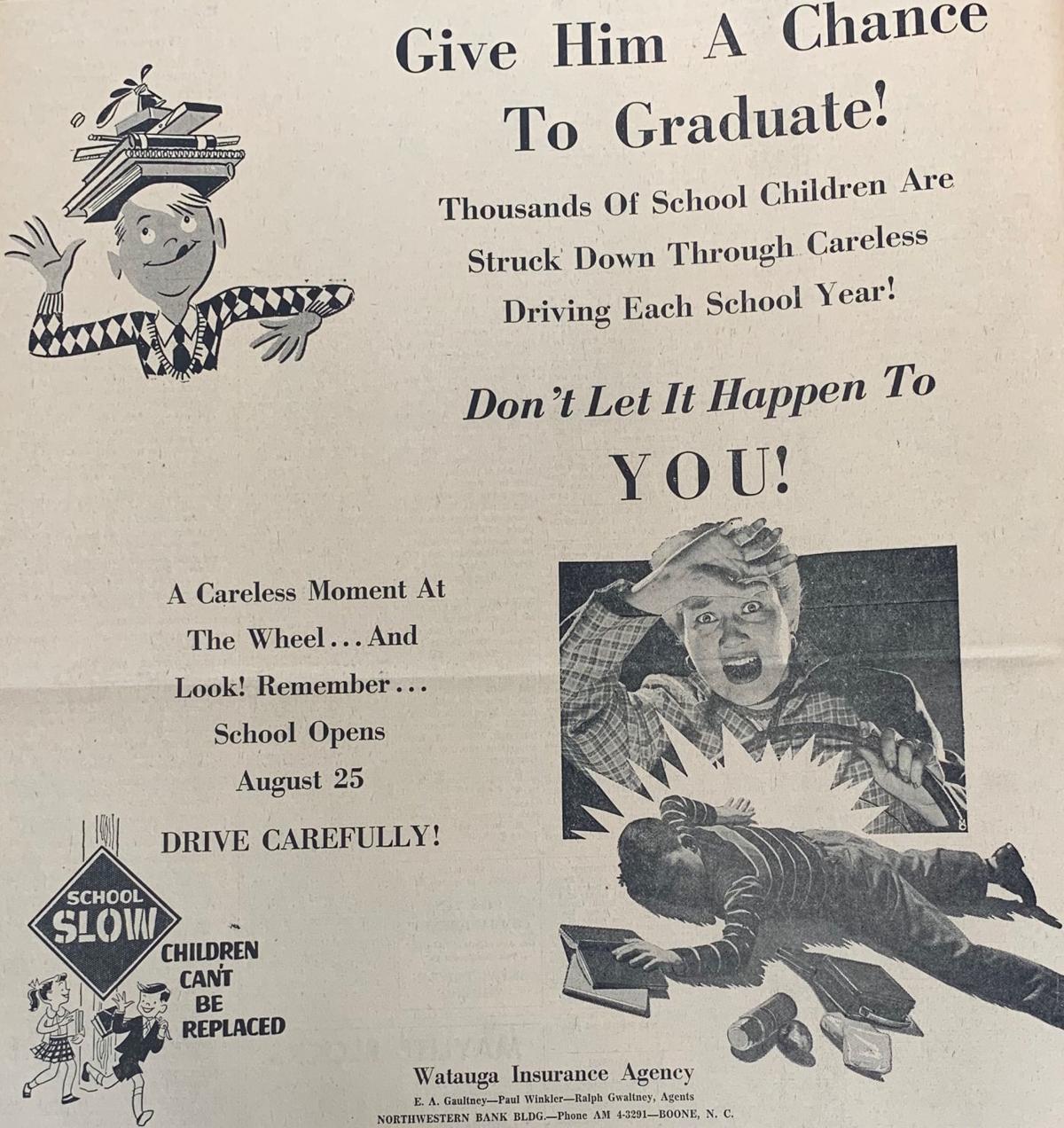 An advertisement from local insurance agencies in 1959 advocates for safe driving around school children. 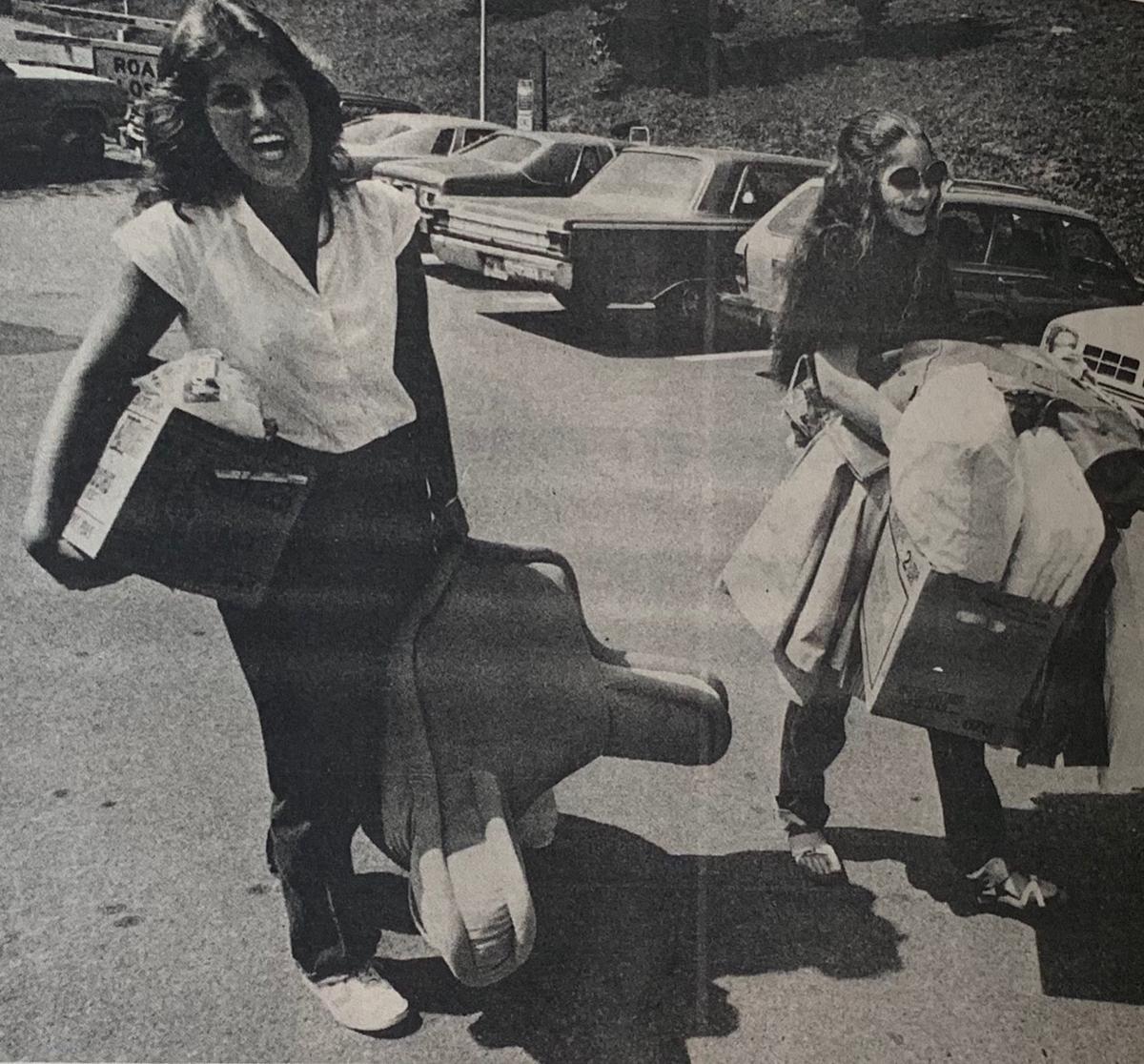 Freshmen students Sheena Sain and Glenda Grigg from Lincolnton are among the students flocking to Boone for the fall semester in 1979.

Carl Clayton eats a hamburger while spinning a basketball on his finger in 1979.

Steve Clark, wolf breeder, and his pet wolf, Timber, stare into a fire while camping in cool mountain temperatures in 1999.

I.G. Greer and W.S. Tarlton pose at Tatum Cabin following the dedication in1959.

An advertisement from local insurance agencies in 1959 advocates for safe driving around school children.

Freshmen students Sheena Sain and Glenda Grigg from Lincolnton are among the students flocking to Boone for the fall semester in 1979.

Free chest X-rays were offered starting the week of Aug. 20, and lasting through September for early detection of Tuberculosis. Ruth Tugman Draughon, executive secretary of the Alleghany-Ashe-Watauga Tuberculosis Association, said that “the mobile X-ray units will be in different areas of the county,” which included the campus of the Appalachian State Teachers College and various industrial plants.

“Once a year this free chest X-ray service is provided and all persons of age 16 and above are urged to take advantage of this special service, for it is truly a means of being sure that no chest disorders exist or if they do early detection means quicker treatment and in most cases complete recovery,” said Draughon.

The Tatum Cabin at Horn in the West was officially named and dedicated to “preserve our historical heritage,” according to W.S. Tarlton. The cabin was a gift to the Appalachian Historical Association from L.T. Tatum, a descendant of Captain Thomas Tatum from the Revolutionary War. L.T. Tatum was present at the dedication, along with Laura Tatum-Howell, who was the oldest living person to have lived in the cabin. At the time that the article was published in the Democrat, the cabin’s two looms were “being operated by craftsmen to show how the cloth was made in early settlers’ days.”

At the Grandfather Mountain Camera Clinic, Carl Clayton of Valle Crucis set an unofficial world record for spinning a basketball on the tip of his finger for 3 hours, 53 minutes and 8 seconds. Then, in 1988, he broke his own record, spinning for 4 hours, 11 minutes and 10 seconds. According to the April 2017 edition of the High Country Magazine, Clayton’s record stood as the world record until 2006 when it was broken by a man from Texas, who exceeded Clayton’s time by less than four minutes.

The Land of Oz attraction in Beech Mountain closed on Tuesdays in August 1979 due to the lack of tourism. “The gasoline situation coupled with general national economic problems has slowed down travel and tourism, especially in our portion of the state. However, the weather this spring and summer has been unseasonable wet and foggy, making a total package that has curtailed family excursions,” said Bob Ash, general manager and executive vice president of the Beech Mountain Resort.

Police in Charlotte arrested four adults for possession of 720 pounds (an estimated $1.8 million worth) of marijuana, but it was the 43,000 pounds of okra that caused them trouble. “The company it was headed for no longer wants it,” reported the Watauga Democrat. “Police found a temporary home for the vegetables and are trying to find someone to take it.”

Two local donations to former President Bill Clinton’s legal fund were highlighted by the AP and Democrat. North Carolina donated $35,354 of the $6.3 million raised at the time of the paper’s publishing. “Hugh M. Morton (of Linville) was the state’s top contributor, giving $1,000. The smallest contribution was $1.15, donated by (a resident) of Hendersonville.”