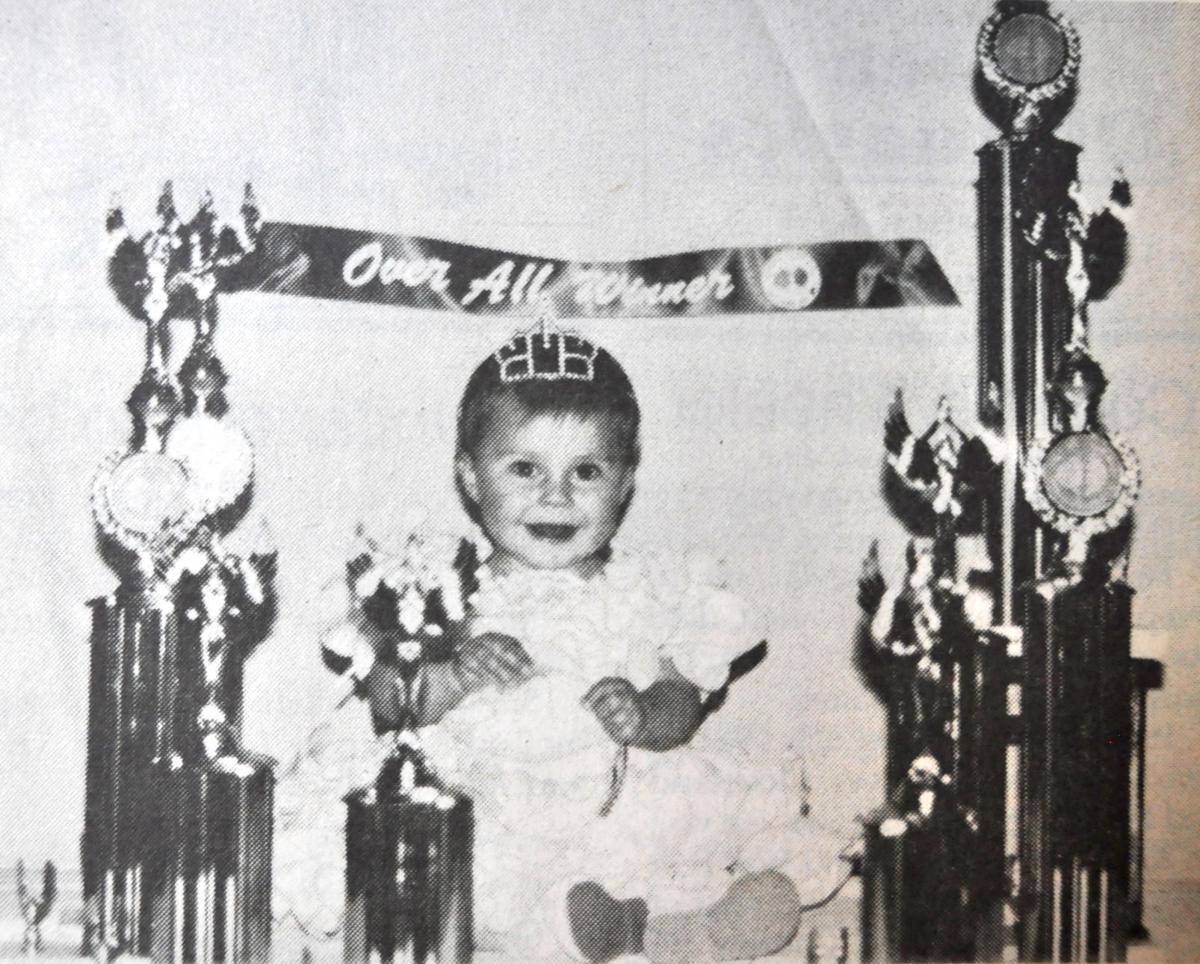 Candice Tiffany Corbin, 11 months old, of Boone and the daughter of Carroll and Lori Corbin, is featured in the Oct. 6, 1960, Watauga Democrat after winning the title of America’s Cover Miss, Little Miss Mountain City in baby beauty competition. 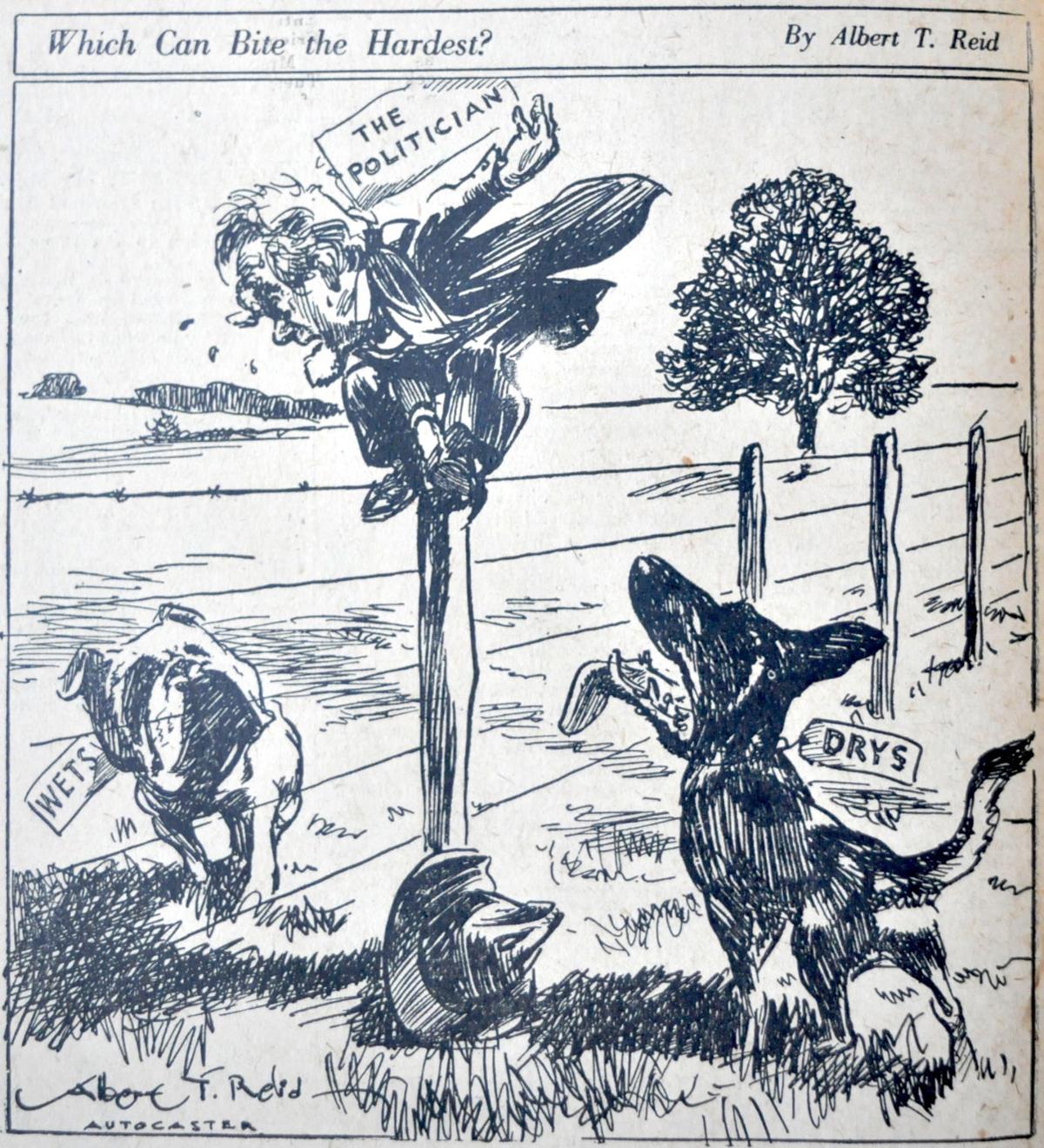 This Prohibition-era political cartoon was published in the Oct. 2, 1930, issue of Watauga Democrat. 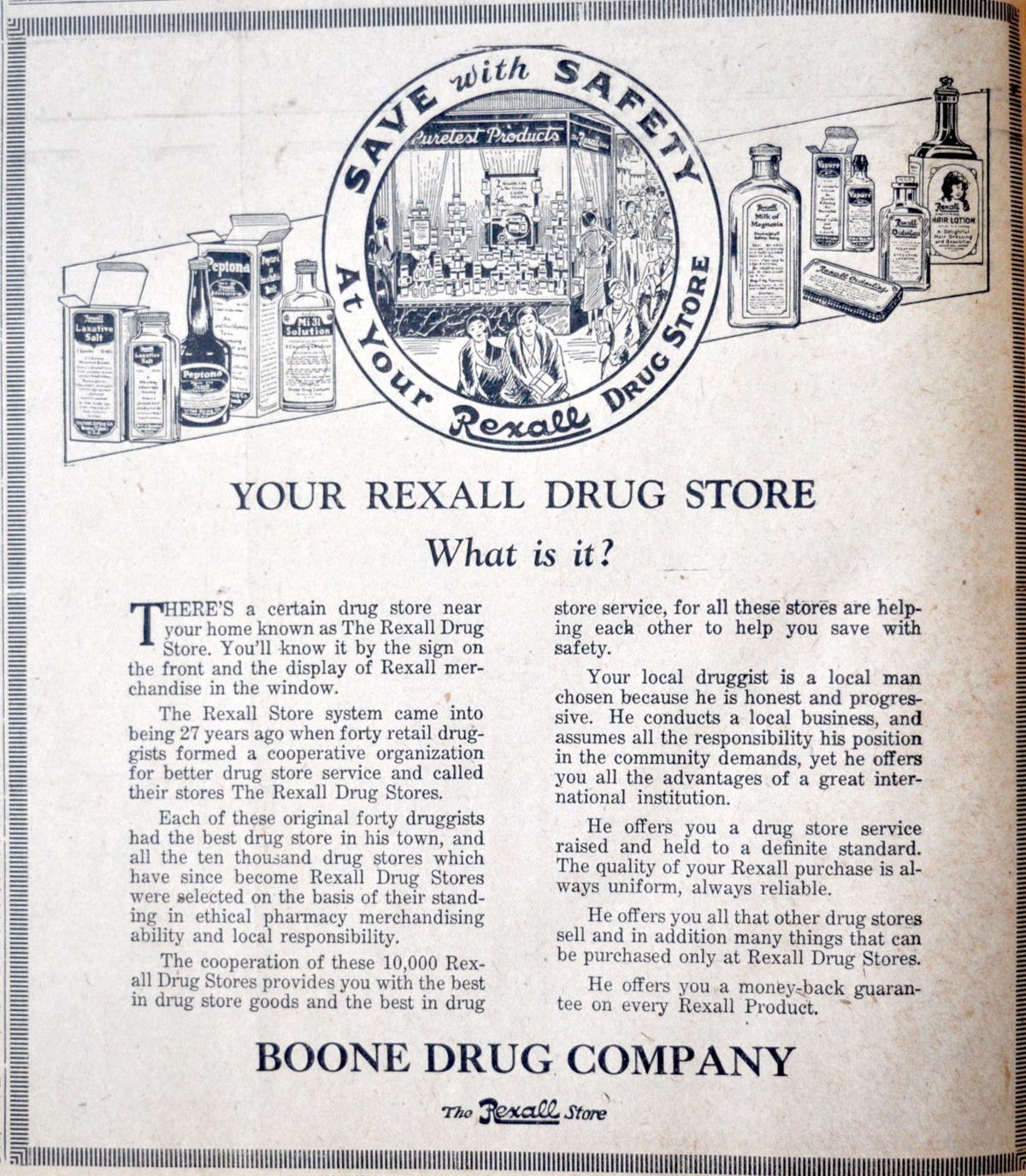 An add for the Rexall Drug Store/Boone Drug Company is published in the Oct. 2, 1930, issue of Watauga Democrat. 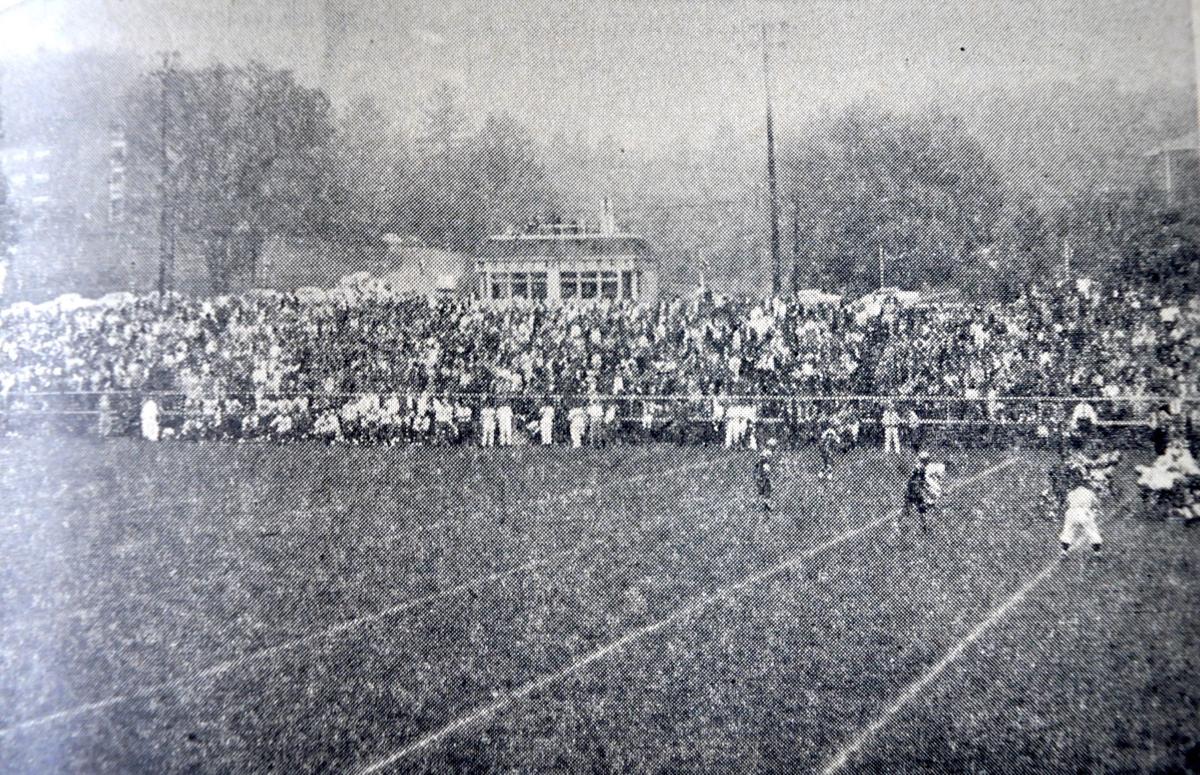 An estimated 5,000 attended the Appalachian State Teachers College’s Homecoming football game on Oct. 1, 1960, where the Mountaineers defeated the Elon Christians 33-13. 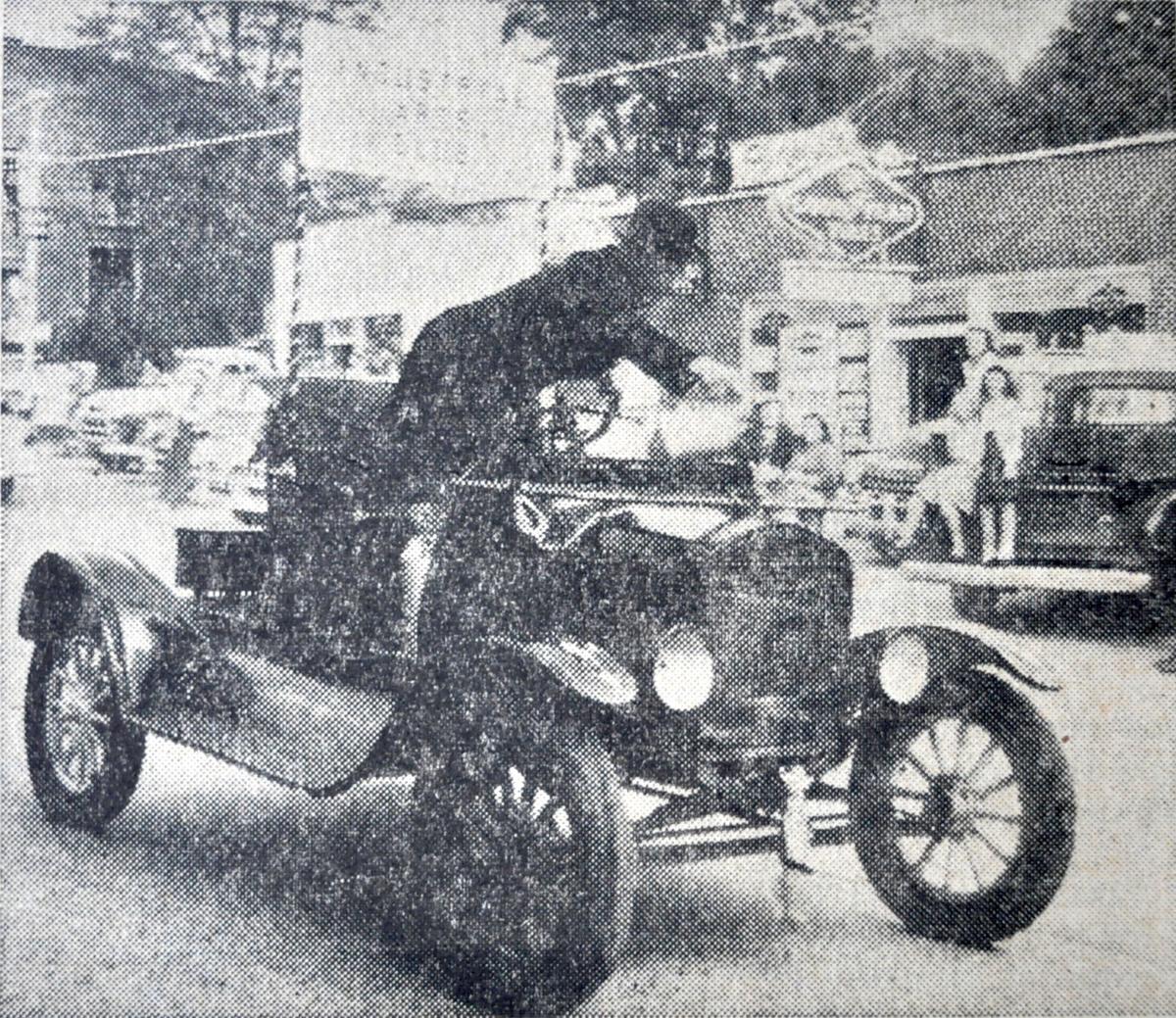 In this photo published in the Oct. 6, 1960, Watauga Democrat, banker Alfred Adams tries to keep his ‘hot rod’ cool by pouring water into the radiator as part of the Appalachian Homecoming Parade in Boone. 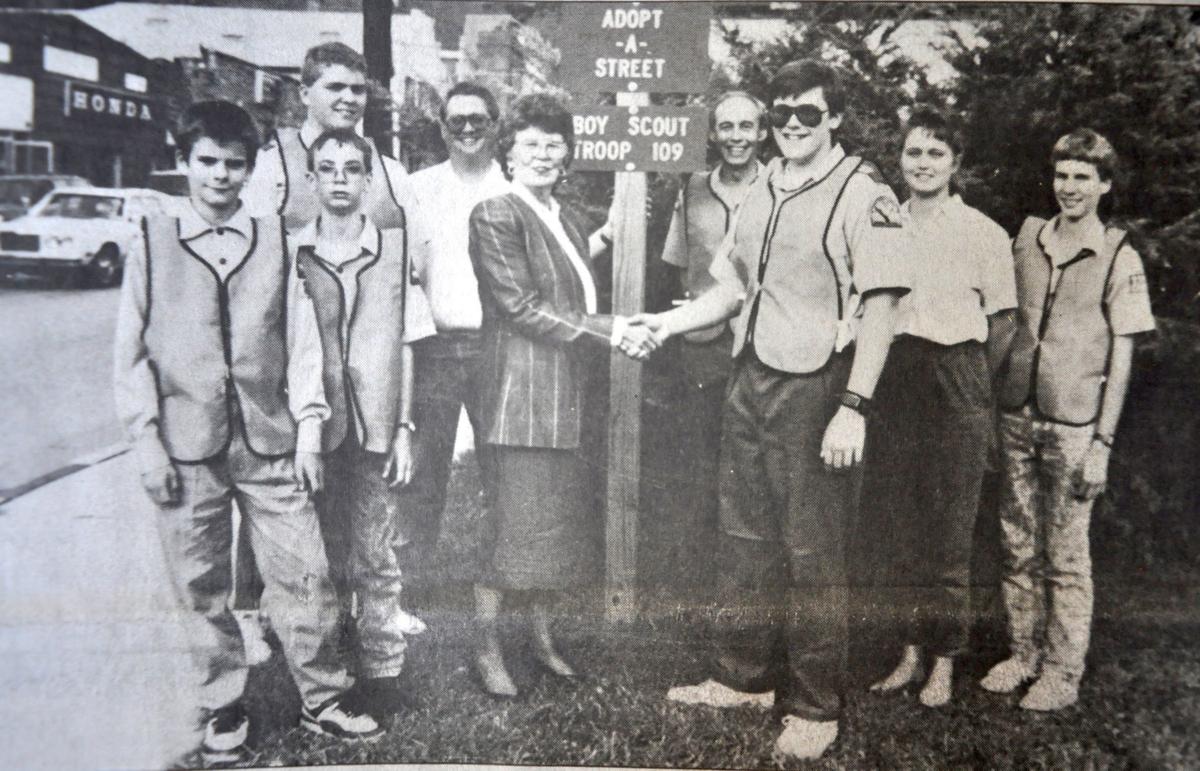 Candice Tiffany Corbin, 11 months old, of Boone and the daughter of Carroll and Lori Corbin, is featured in the Oct. 6, 1960, Watauga Democrat after winning the title of America’s Cover Miss, Little Miss Mountain City in baby beauty competition.

This Prohibition-era political cartoon was published in the Oct. 2, 1930, issue of Watauga Democrat.

An add for the Rexall Drug Store/Boone Drug Company is published in the Oct. 2, 1930, issue of Watauga Democrat.

An estimated 5,000 attended the Appalachian State Teachers College’s Homecoming football game on Oct. 1, 1960, where the Mountaineers defeated the Elon Christians 33-13.

In this photo published in the Oct. 6, 1960, Watauga Democrat, banker Alfred Adams tries to keep his ‘hot rod’ cool by pouring water into the radiator as part of the Appalachian Homecoming Parade in Boone.

‘South’s Soldiers Feted as the Last Reunion is Held,” the Watauga Democrat announced on the front page of the Oct. 2, 1930, issue.

“Seven survivors of Lee’s gray-clad armies, each of them well along toward the century mark in age, closed the final reunion of Camp Nimrod Triplett, United Confederate Veterans, at State Teachers College here Friday afternoon,” the article stated.

“Captain E.J. Norris, 87, who for thirty-odd years has commanded Camp Nimrod Triplett, was in charge of the program, which closed with memorial addresses by Professor A.M. Norton of the college faculty, and Rev. Mr. Worley, of Johnson County, Tennessee. Rev. P.A. Hicks, of the Boone Baptist Church, had charge of devotional exercises, and Dr. B.B. Dougherty, president of the college, provided meals for the veterans.”

“Captain Norris, known to his many friends as ‘Uncle Lige,’ enlisted in Company D, 58th N.C. Regiment, at the age of 17; was ‘baptized with fire’ at Chicamauga and Missionary Ridge, witnessed the ‘Battle Above the Clouds’ at Lookout Mountain, and received a gunshot wound at that place which sent him home for seven months,” the article continued. “After his wound had healed sufficiently, he went back to this regiment, was in the skirmishes around Chattanooga, and at the Battle of Lovejoy Station (Georgia) was shot through the hips with an ounce ball. Captain Norris returned to his home near Boone and, being unfit for further service on the battlefront, was made an officer in the ‘home guard.’ When Stoneman’s raiders paid their destructive visit to Boone near the close of the war, his father, Ephriam Norris, was shot down as he ran from the Yankees near the present site of the Daniel Boone Hotel.”

“Just one dozen soldiers of the Confederacy remain in the county,” the article stated. “Only a few years ago this annual reunion was attended by scores of veterans, but the years have taken their toll. So Boone will witness no more reunions. Time has removed one of the most pleasant tasks that Watauga people were ever permitted to perform — that of paying tribute to their vanquished heroes of the ‘Lost Cause.’”

Elsewhere in the issue, in a section called “Rambling Around” by Smith Hagaman, it was reported that “Watauga is proving to the state that it is a real tobacco-growing county. The crop is being harvested just now and the only apparent trouble the farmers are having is to find room on the fields to hang the crop for curing. Of course, no large fields were planted, but many farmers, especially west of Boone, have small lots — one-fourth to an acre.”

An article titled ‘Horn To Blow Again” noted that the Boone outdoor drama “Horn in the West,” which began in 1952, would be performed again the following year.

At a meeting of the Southern Appalachian Historical Association, Kermit Hunter, author of the original script, addressed the group and spoke on “the present international situation and what we must do to halt the invading forces of sin and communism,” the newspaper reported.

“It’s time for us to return to God,” he was reported as saying, adding, “that is where our strength lies.” He also denounced the impacts of “filthy literature” and “other indecent activities.”

A brief titled “In Fashion Now” noted that “Hats are tall — they may be dome-shaped or go straight up, but one of the best designers allows pinching and dimpling of the high crown ... they have a soft look — there is much draping and swirling of ... satin or velvet. Feathers, jewels, and fur are used extensively to add to their glamour.

“Some of the necklaces now have beautiful clasps — these are removable and can be worn as pins. A black and white taffeta apron over a basic black wool dress is smart. The apron has a ruffle and is tied with a bow in the back. Gypsy hoop earrings are very popular. The go particularly well with pleated skirts.”

A local Boy Scout developed a program to help beautify Boone, the Watauga Democrat reported on Oct. 3, 1990 — and that program, Adopt-A-Street, is still active today.

Jason Fisher, a 15-year-old Watauga High School student, worked with the Boone Public Works Department for nearly a year to establish the program as his Eagle Scout project.

Boy Scout Troop No. 109 was the local organization to adopt local streets, volunteering to periodically pick up litter along the roadways.