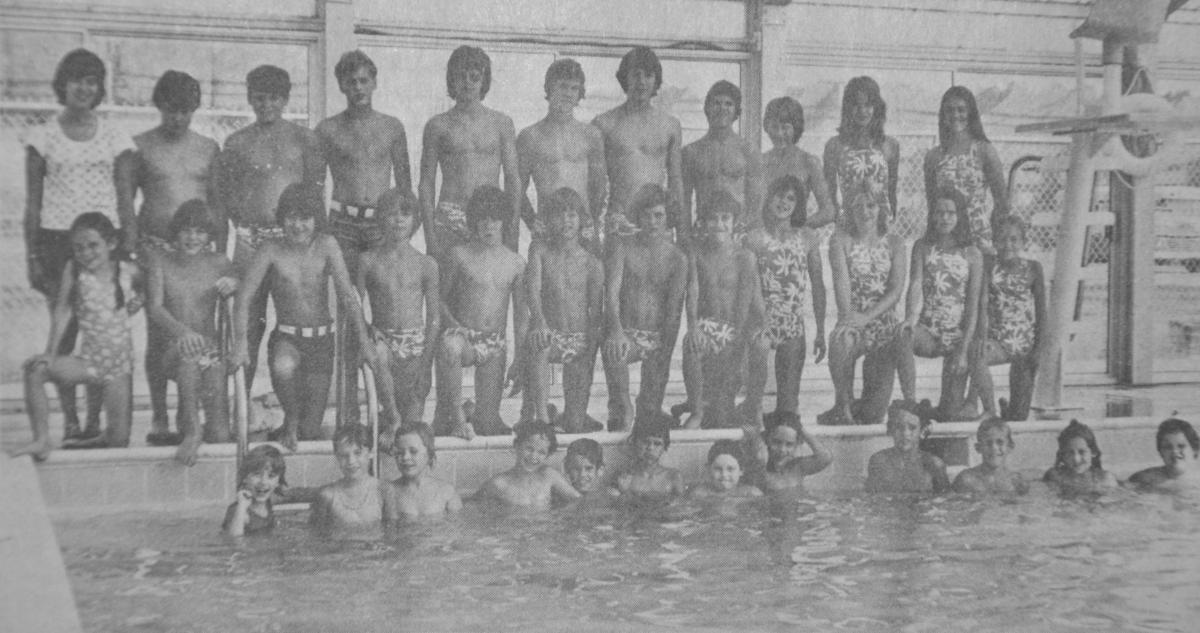 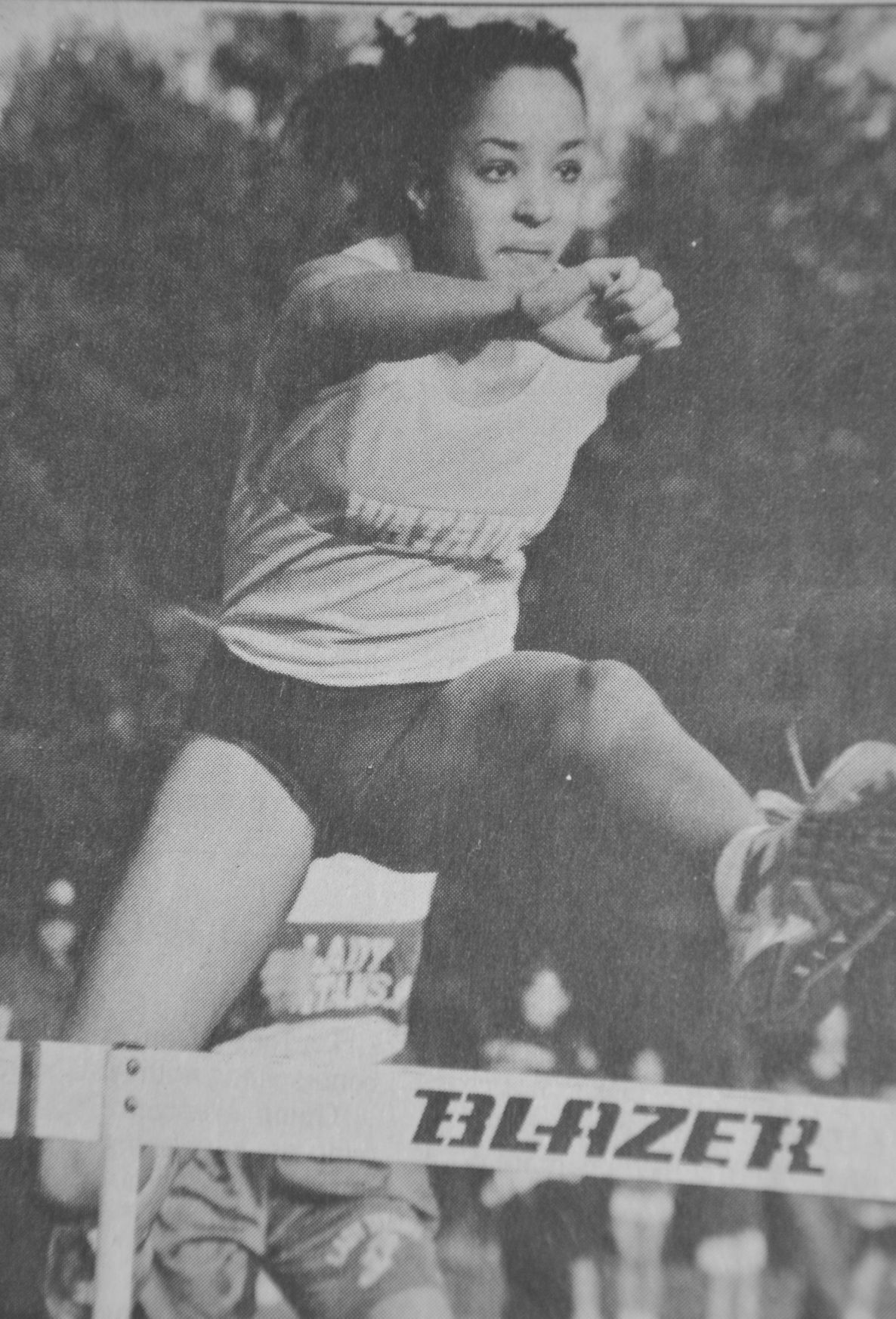 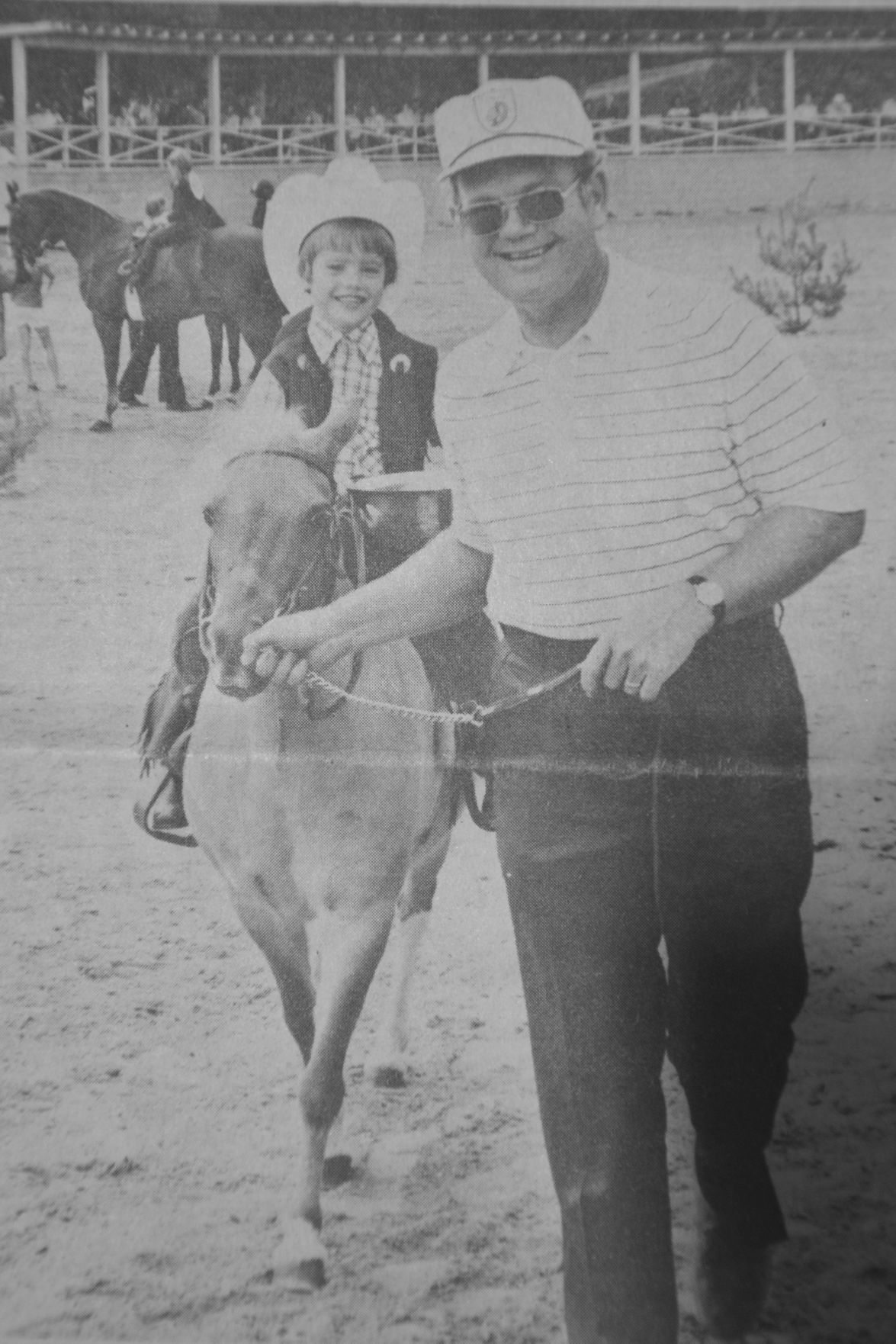 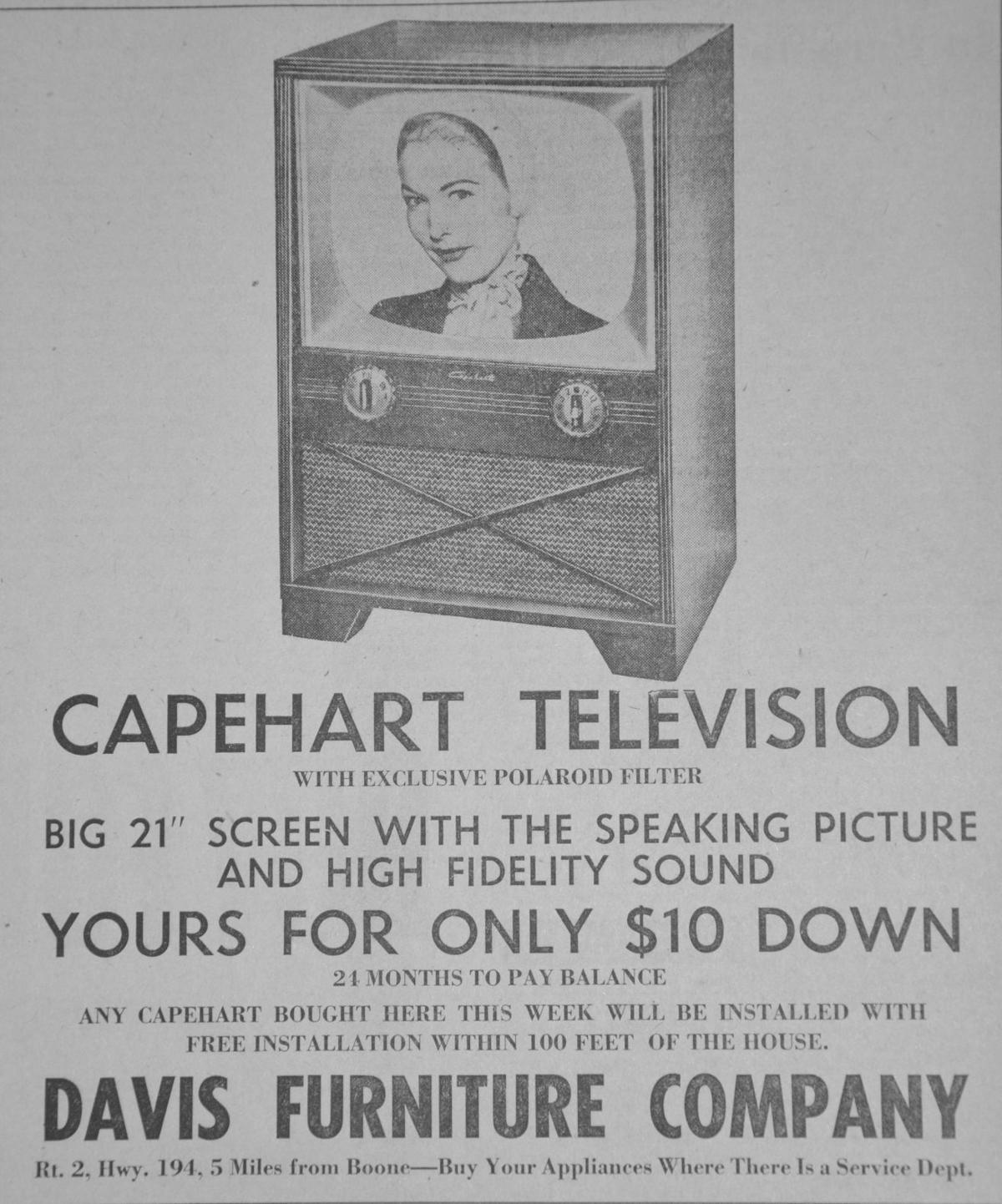 A 1955 advertisement shows a Capehart television for sale at the Davis Furniture Company. 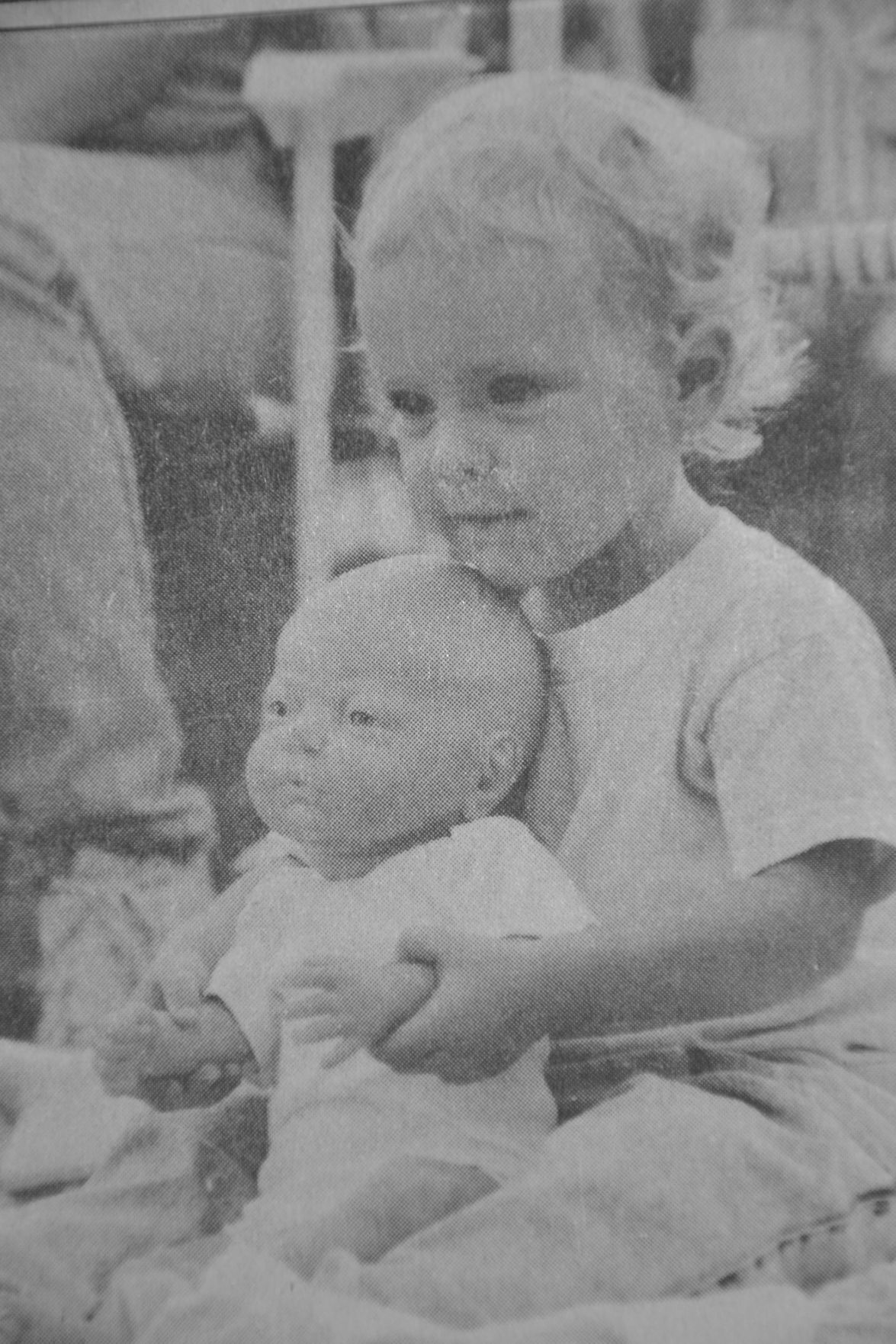 Emily Walsen, 2, watches the Greens Gospel Singing Jubilee with her doll in 1995.

A 1955 advertisement shows a Capehart television for sale at the Davis Furniture Company.

Emily Walsen, 2, watches the Greens Gospel Singing Jubilee with her doll in 1995.

“The overcrowded conditions prevailing at Appalachian High and Elementary Schools occupied the attention of the Board of Education, and the County Superintendent, at a special meeting held last week and a system of reassignment and redistricting was approved in order to relieve the congestion,” stated an article in the Aug. 18, 1955, edition of the Watauga Democrat.

The article explains that the Boone High and Elementary Schools were departments of the Appalachian State Teachers College.

“As a result of the conference the board decided to reassign certain students, who had been coming to Boone, so that they will attend in their own districts. High school students enrolled in Boone will be permitted to attend Appalachian High School, using private transportation to bus connections to the Appalachian High School if they desire. All other students will attend schools in their districts,” the article stated.

“Mr. Chapell Wilson, dean of the graduate school at Appalachian, addressed a letter to the Watauga Board of Education in December 1954, stating the Appalachian High School and the Appalachian Elementary School were faced with extreme overcrowding. Unless additional facilities could be built, it would be impossible to enroll the anticipated number of students in these schools for the 1955-56 school year.

“At the meeting last week, Wilson pointed out that the high school in Boone started out with 175 students, and that the enrollment has increased to 475, not counting the eighth grade, which used to be housed in the high school building. (L.W. Alexander, state bus route supervisor) said there are 11 different locations where students may be crossing district lines, and that if students would be required to attend school in their districts, the situation would be relieved considerably,” according to the article.

“The long debated issue of fire protection for areas outside Blowing Rock in Caldwell County was settled last week by the Caldwell County Commissioners,” according to an Aug. 11, 1975, article in the Watauga Democrat.

“Upon a recommendation from the fire commission, the commissioners agreed to allot $1,920 to Blowing Rock. The town had asked the Caldwell Commissioners for $2,000 for answering fire calls in the county, but until last week the county had offered only $1,000.

“At first the town had refused to accept the $1,000 and said that it could not continue fire service in the area for that amount. The service was restored, however, when a Blowing Rock resident offered $1,000,” according to the article.

“Jack Rhodes, a member of the fire commission, told the county board that residents outside of Blowing Rock are planning to establish a fire district. Communities surrounding Blowing Rock include Gay Mountain, Blackberry, Bailey’s Camp and Globe,” the article stated.

“Walmart officials have confirmed that the plans filed by a Davidson-based development group for a new retail building in southeast Boone will indeed be home to a Walmart,” according to an Aug. 9, 1995, edition of the Watauga Democrat.

A previous article in the Aug. 7, 1995, edition of the publication explained that a new full-scale development of the old Southgate and Watauga Village Shopping Center was to take place. At the time of the first article, it was unknown what “mega-store” would be entering into the space.

“But an official at Walmart’s Bentonville, Ark., headquarters said Wednesday that the chain has asked that the new store be downsized to about 125,000 square feet, instead of the nearly 200,000 square feet called for in the submitted plans.

“Those plans were received late Friday at Boone’s planning and inspections department and showed the new store to be the centerpiece of the redevelopment of a decaying retail section of town,” stated the Aug. 9, 1995, article. The plans were submitted by Tricor Development of Davidson.

The Aug. 11, 1995, article stated that the store would have 123,000 square feet and would include 36 general merchandise departments. At this time, it was not planned to be a super center, have a grocery store nor an oil change/auto lubrication facility.

“But the new store will feature a pharmacy, a lawn and garden center and a snack bar, most likely a McDonald’s hamburger restaurant,” said Stacey Webb, a corporate affairs spokeswoman for Walmart, according to the article.