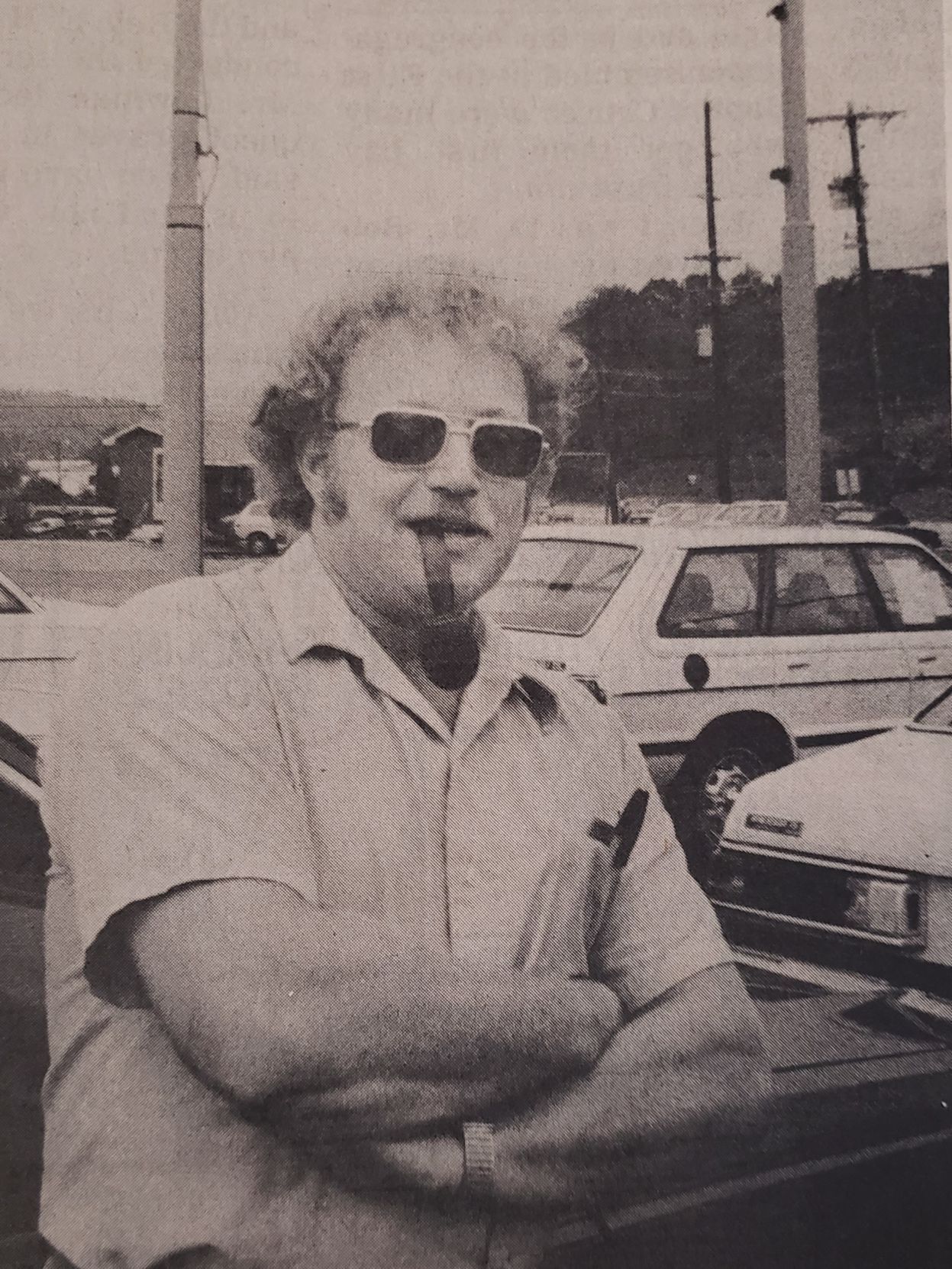 Larry Cone of Appalachian Vintage Automobiles in Blowing Rock in 1981. Cone said in an interview that the car sales market was on the rise. 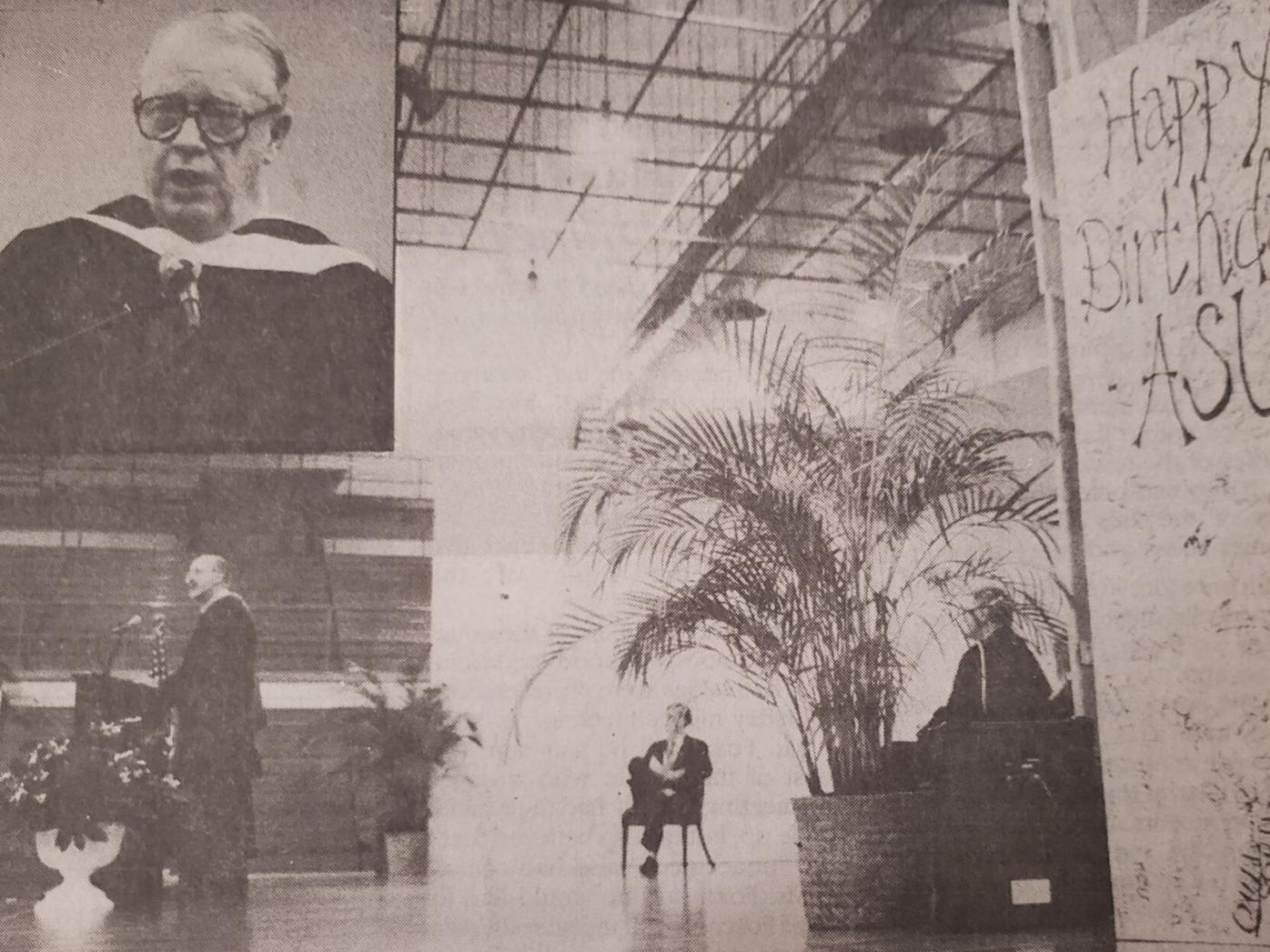 Then-Appalachian State University Chancellor John Thomas speaks to a crowd at a convocation ceremony to cap off Founder’s Day in 1991. Also speaking at the event was Lt. Gen. Thomas Kelly, whose appearance sparked protests from students and staff. 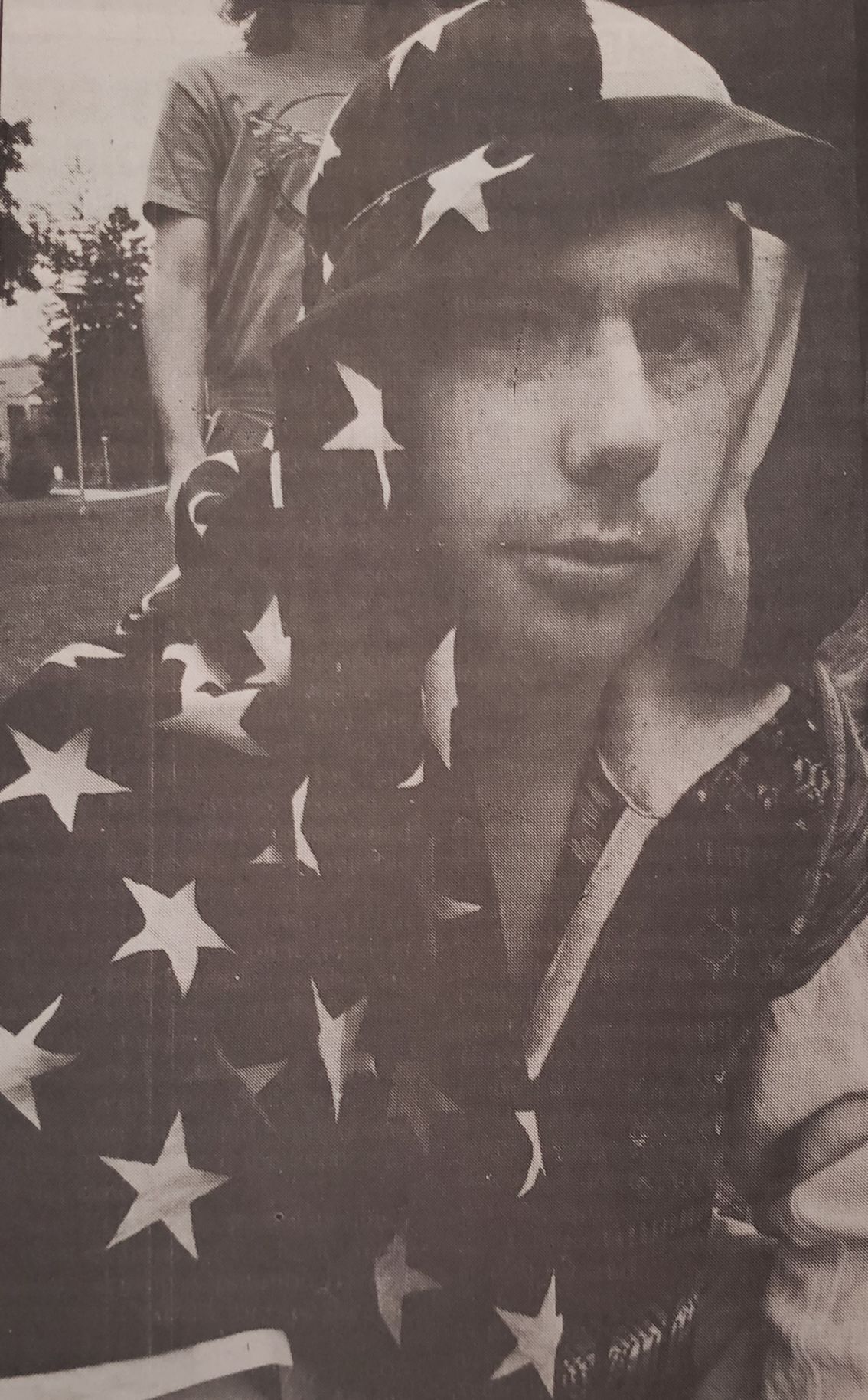 Burke Ewing of Los Angeles hang glides from the top of Grandfather Mountain in 2001. 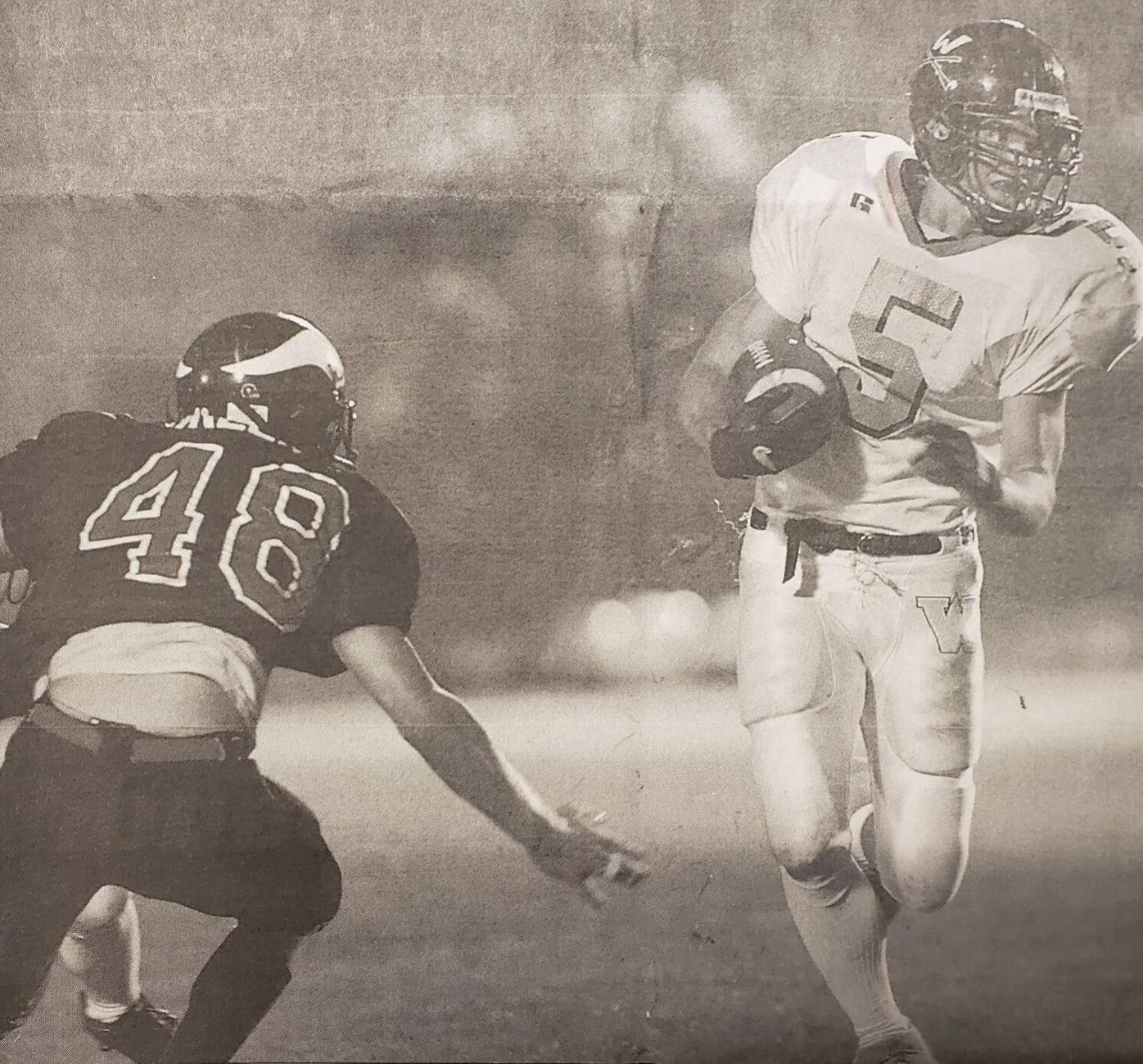 Larry Cone of Appalachian Vintage Automobiles in Blowing Rock in 1981. Cone said in an interview that the car sales market was on the rise.

Then-Appalachian State University Chancellor John Thomas speaks to a crowd at a convocation ceremony to cap off Founder’s Day in 1991. Also speaking at the event was Lt. Gen. Thomas Kelly, whose appearance sparked protests from students and staff.

Burke Ewing of Los Angeles hang glides from the top of Grandfather Mountain in 2001.

“School officials will apparently take a closer look at who borrows their vehicles and for what purpose in the future following a mishap that occurred last week,” read an article in a Sept. 10, 1981, edition of the Watauga Democrat.

According to the article, a sorority at Appalachian State University borrowed an activity bus — owned by the Watauga County Board of Education and used at Watauga High School — only for it to be involved in a “fender-bender” in the parking lot of a Blowing Rock establishment called 1849.

“The activity bus damaged another car in the parking lot by some $100, according to the Blowing Rock Police report. The bus sustained no damages. No charges were filed,” the article stated.

According to the article, then-WHS Athletic Director Jack Groce said it was the first time he could recall an ASU sorority borrowing a vehicle. He added that there was an informal agreement with ASU for the use of vehicles, and that there was “nothing in writing.”

“Groce added that the driver of the bus is one who has driven the bus before on other occasions such as for field trips. Groce said he did not know at this time who would be responsible for the damage to the other vehicle. He added that he has not seen the accident report, nor has the owner of the damaged vehicle been to the high school to inquire about restitution,” the article stated.

The superintendent at the time, Lester J. Propst Jr., said in the article that there was no policy about the loaning out of school vehicles, but that the school board will look at who it is loaning them to more closely.

“I wasn’t aware this was being done,” Propst was quoted as saying in the article.

“The United States should be proud of its young people, as well as its technology, after their performances in Operation Desert Storm. That was the message that retired Lt. Gen. Thomas Kelly told students and faculty at a convocation ceremony at Appalachian State University,” read an article in a Sept. 6, 1991, edition of the Watauga Democrat.

Kelly’s address was titled, “Pride: America is Back” and was given as part of the school’s annual Founders Day, which in 1991 celebrated ASU’s 92nd birthday.

“The general, who was director of operations for the Joint Chiefs of Staff during operations Desert Shield and Desert Storm, told the audience that America had a lot to be proud of after the country’s performance in the Persian Gulf War,” the article stated.

“They feel good that we showed the world we are the best. In 1991, America is a strong country,” Kelly was quoted as saying in the article.

According to the article, Kelly told the students they were part of the “most defamed” group in the U.S., but should feel proud of their generation’s exploits as warriors in the war. He added that the young people were part of the “best trained, best equipped” military in the country’s history.

“While Operation Desert Storm was necessary and the United States had a lot to be proud of, war itself is not good,” he said in the article.

“War is evil. Going out and killing people is evil. It can only be the lesser of two evils,” Kelly was quoted as saying in the article. “But, if you’re going to fight one, fight to win.”

According to the article, Kelly praised then-U.S. President George Bush’s decision to “stop the war when he did, adding that he knew of no other military officer who disagreed with that decision.” The article added that the president received criticism for stopping the war “too soon” and not “ridding the world of Saddam Hussein,” but Kelly dismissed the latter.

“Saddam Hussein is a viper without fangs,” Kelly was quoted as saying in the article.

The article and another in the same issue noted that Kelly’s appearance and time at the podium were protested both inside and outside of the event. According to the article focusing on the protests, issues were raised with Kelly’s message of taking pride in “military conquest” and some felt the spot should have gone to someone in the academic field.

“Friday morning, an entourage of mostly four-wheel-drive vehicles with roof racks carrying colorful hang gliders snaked its way up the entrance road of Grandfather Mountain for the first time in 15 years,” read an article in a Sept. 10, 2001, edition of the Watauga Democrat.

According to the article, a three-day hang gliding event brought together 40 hang gliders, including four Masters champions, “the pioneers of the sport of hang gliding.”

“The three-day event was sponsored by Kitty Hawk Kites of Nags Head, whose owner, John Harris, was the first person ever to launch from the cliffs of the mile-high, majestic mountain when he piloted a hang glider off the summit in 1974,” the article read.

According to the article, the growth of hang gliding in the early 70s eventually found its way to the High Country, and Grandfather Mountain was chosen as the hosting site for the United States Hang Gliding Association’s National Championships.

“In 1976, Hugh Morton (president of Grandfather Mountain) formed hang gliding teams, hosted and supported several events, created the Raven and Eagle awards and began the Masters of Hang Gliding. The Masters was the most elite hang gliding competition in the world,” Harris was quoted as saying in the article.

According to the article, the Masters was held annually at Grandfather until 1986 and ended when Boone’s 1984 U.S. Champion Steward Smith died while landing in the competition.

“Steward’s name came up often over the weekend. He held North Carolina’s hang gliding distance record of 112 miles, which he set by soaring from Grandfather into southern Virginia. Smith’s wife, Kathy Meier, and his daughter, Kristin, attended the fly-in and were honored by a standing ovation at an awards ceremony Saturday evening,” the article stated.