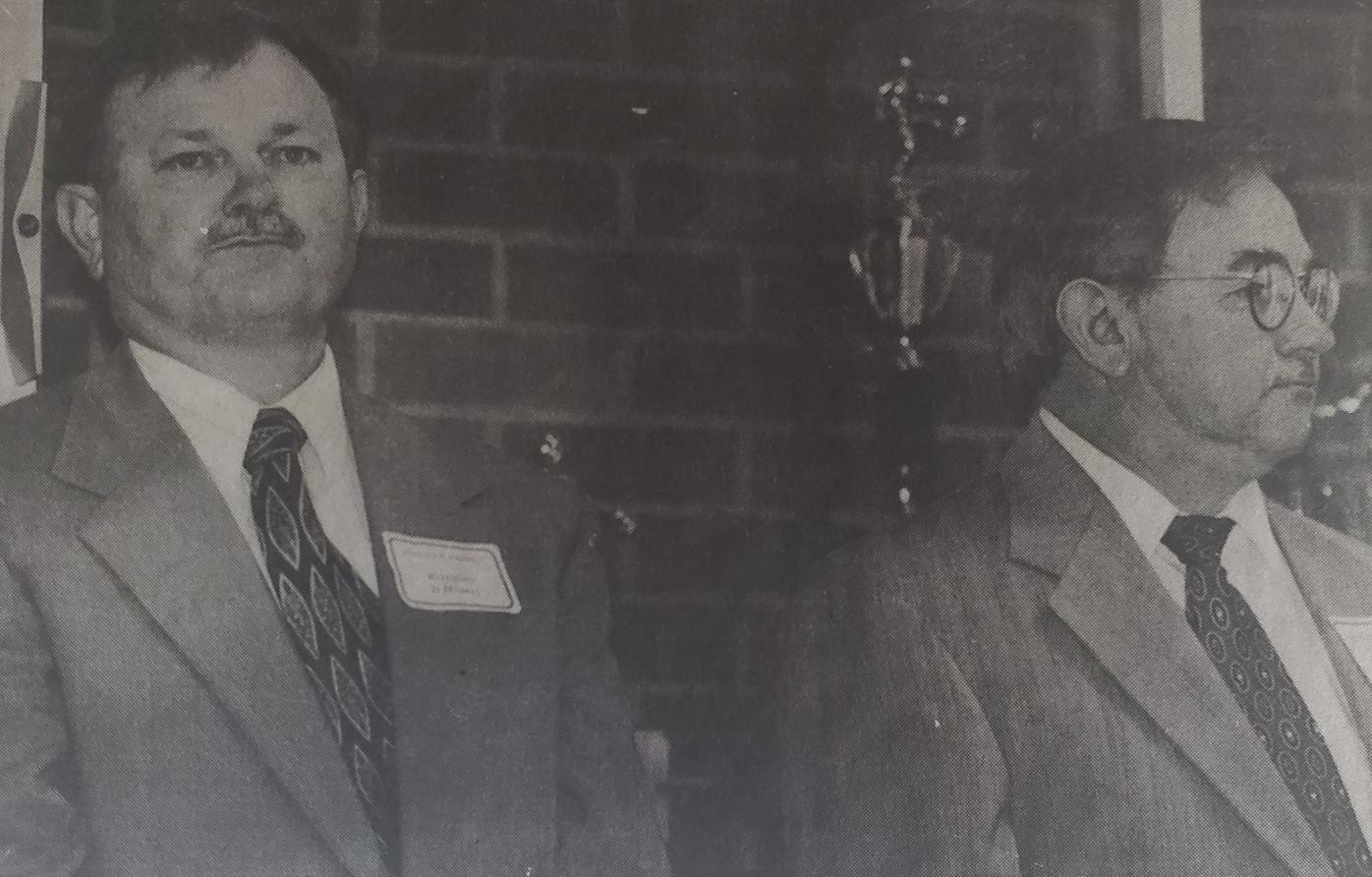 Royce and Sterling Carroll donated $300,000 to the creation of a sports complex at Watauga High School in 1996. 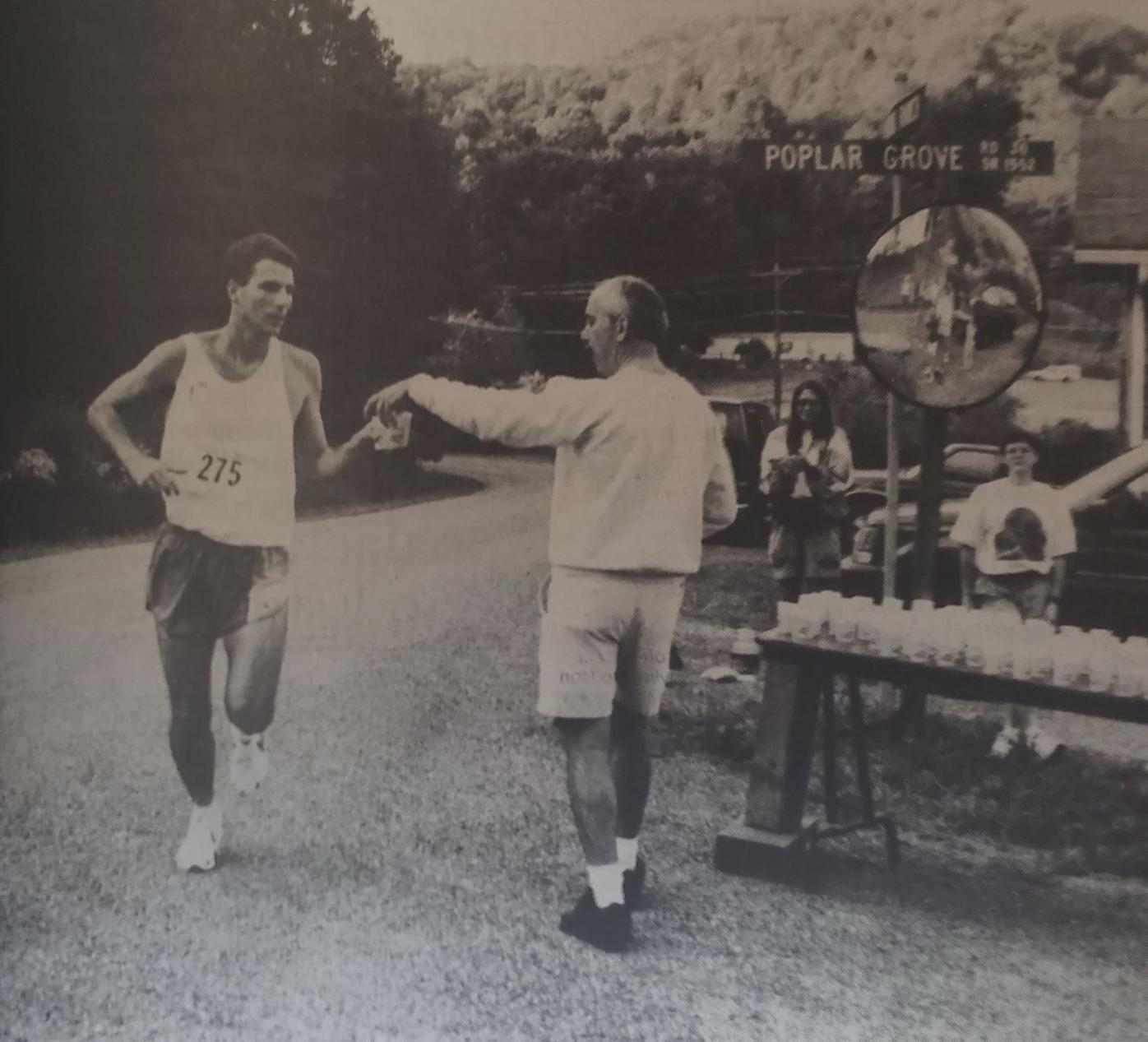 Kevin Odiorne takes a cup of water from John Dees while running the Grandfather Mountain Marathon in 1996. Odiorne finished the race second. 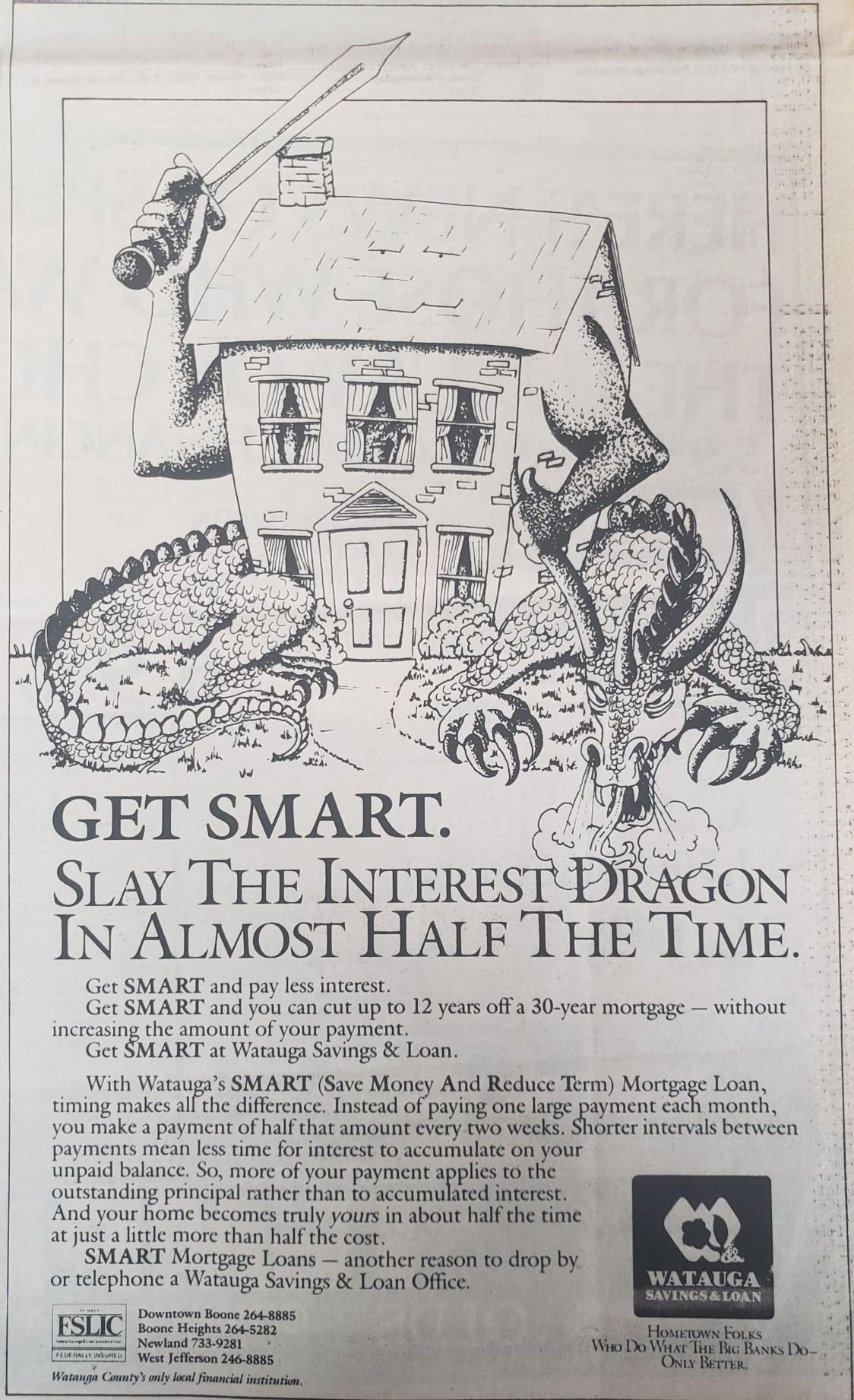 An ad for Watauga Savings and Loan appeared in the July 11, 1986, issue of the Watauga Democrat. 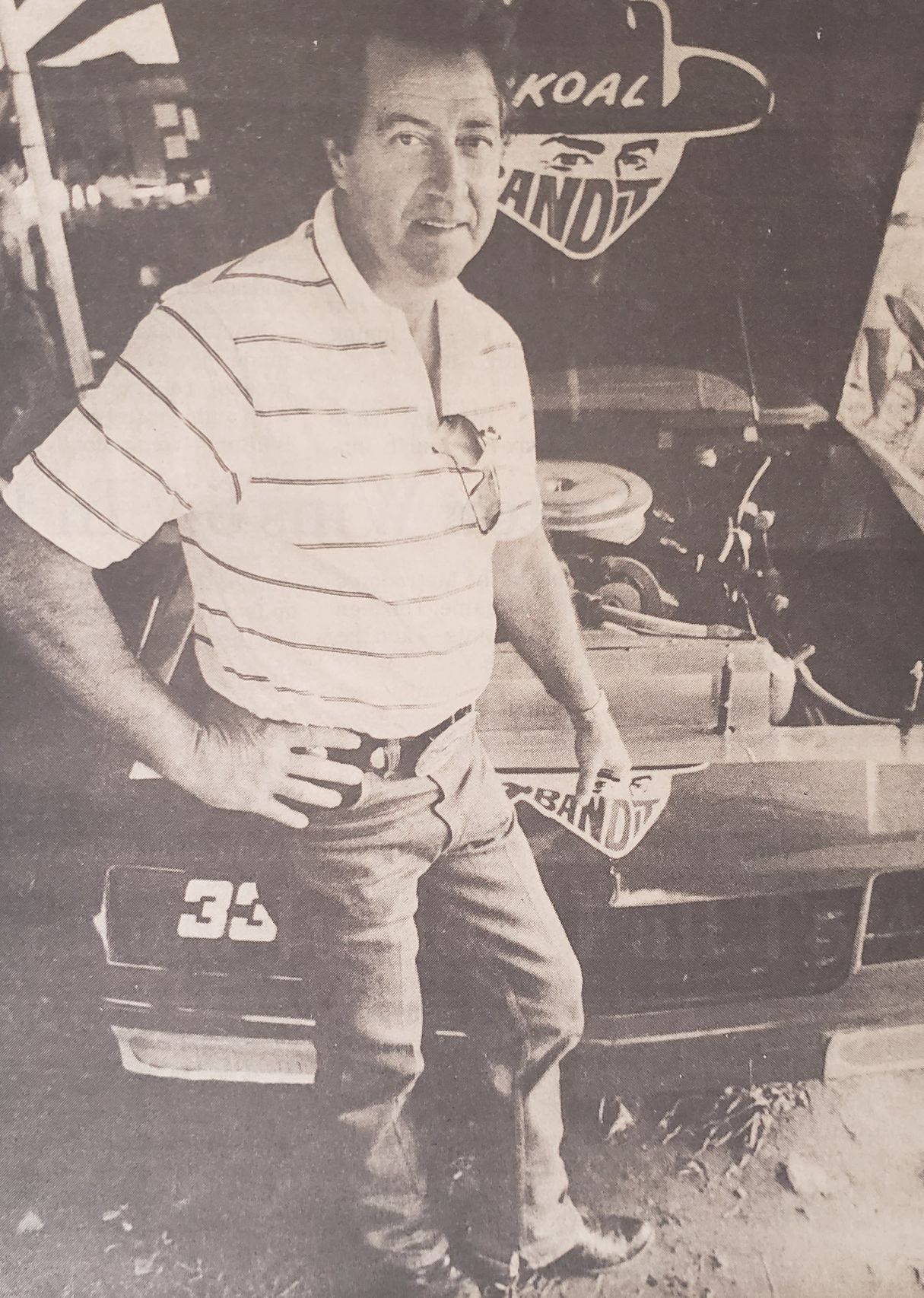 NASCAR driver Harry Gant paid a visit to the High Country Fairgrounds in July 1986, bringing with him his No. 33 Skoal Bandit car.

Bethel resident Robert Rominger shows off an eight-foot-tall tobacco plant he grew in 1976.

Royce and Sterling Carroll donated $300,000 to the creation of a sports complex at Watauga High School in 1996.

Kevin Odiorne takes a cup of water from John Dees while running the Grandfather Mountain Marathon in 1996. Odiorne finished the race second.

An ad for Watauga Savings and Loan appeared in the July 11, 1986, issue of the Watauga Democrat.

NASCAR driver Harry Gant paid a visit to the High Country Fairgrounds in July 1986, bringing with him his No. 33 Skoal Bandit car.

Bethel resident Robert Rominger shows off an eight-foot-tall tobacco plant he grew in 1976.

“The Watauga County Board of Education spent much time during their monthly meeting Monday discussing whether or not to ban smoking at Watauga High School,” read an article in the July 15, 1976, issue of the Watauga Democrat.

“Randall Thomas, a public health intern who has approached the board on this subject several times in the past, again asked the board to consider prohibiting smoking entirely at the high school and brought several local residents along to support his arguments,” the article stated.

According to the article, Avery County High School was the only high school in the state where smoking was prohibited, and was being looked at by members of the WHS administration as possible inspiration.

Also at the meeting was Dr. Richard Furman, who said roughly 75 percent of his chest cases are related to smoking, according to the article.

According to the article, the board was relatively receptive to the idea, but did not want to make the decision on their own. The board opted to table the discussion, wanting to discuss a proposal with WHS faculty and student leaders before passing any firm rules.

While a storm came into town in July 1986 and rained down on visitors to the High Country Fairgrounds, one in attendance was NASCAR driver Harry Gant and his legendary No. 33 Skoal Bandit car, according to an article in the July 11, 1986, issue of the Watauga Democrat.

“In a pullover shirt, blue jeans and western boots, the popular Taylorsville driver appeared at ease talking shop with the friendly faces that surrounded him throughout the blusterous evening. Gant was making a personal appearance in Boone before preparing to hightail it back to the oil-slick asphalts in a couple of weeks, when the Winston Cup circuit resumes competition at Pocono, Pa., one of his all-time favorite tracks,” the article stated.

At the time, Gant was a member of the Skoal Bandit racing team, which was part-owned by Hal Needham and Burt Reynolds. At the time, Gant had failed to pick up a win and only had 14 races left in the season, but said he and the team were still optimistic.

“We’re not really disappointed,” Gant was quoted as saying. “We really don’t win until late in the year. We’re still in good shape if we could just start finishing. We’re starting to get faster.”

Gant was only two years removed from a 1984 second-place finish in the Winston Cup standings, the best finish he would record in his 22-year career, and would finish the 1986 season in 11th place with no wins.

“The new sports complex at Watauga High School received a big boost Friday, thanks to a major donation from an area manufacturer,” read an article in the July 15, 1996, edition of the Watauga Democrat.

According to the article, Royce and Sterling Carroll, owners of Carroll Leather Inc., announced a $300,000 donation over the following three years towards the construction of the complex. The complex was set to include a football stadium, softball field, practice fields, six tennis courts, an eight-lane track and a cross-country trail.

In response to the donation, the Watauga County Board of Education decided to name the new complex in the Carroll’s honor.

“In about two years, WHS will become the home of the Royce and Sterling Carroll Physical Education and Sports Complex,” the article stated. “The 275 employees of the home-grown manufacturer will also be immortalized, thanks to what will become known as the Carroll Leather Field House.”

At the time of the article, Don Lucas, chairman of the 45-person task force dedicated to the project, said the complex was “90 percent funded” with roughly $900,000 raised in 16 months.

“Our short-range goal is to get the stadium operational for fall sports in 1997,” Lucas was quoted as saying.