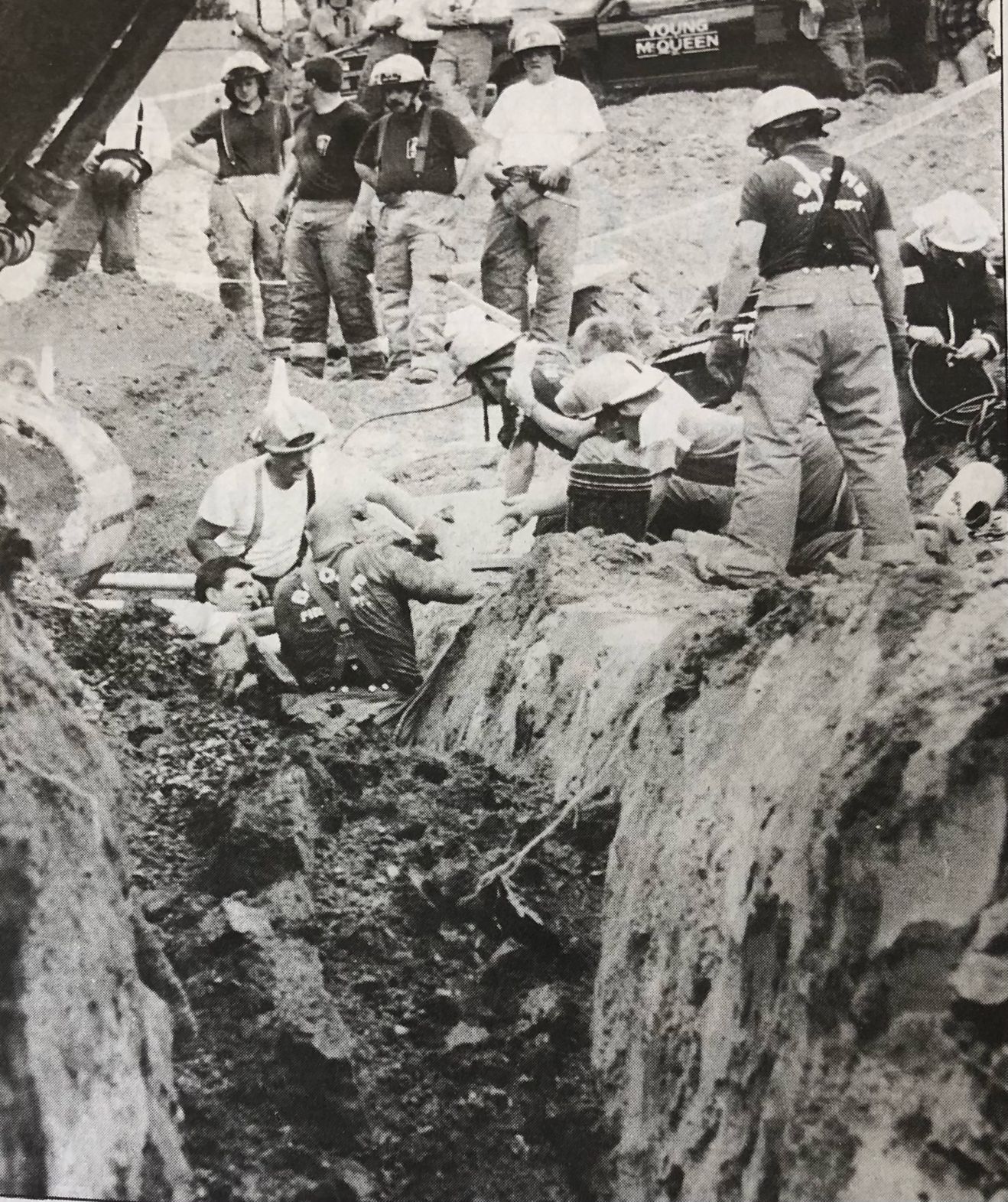 Approximately 100 rescues workers worked to free Dana Woodfin after he was buried up to his forehead in dirt as seen in a May 14, 1983, edition of the Watauga Democrat. 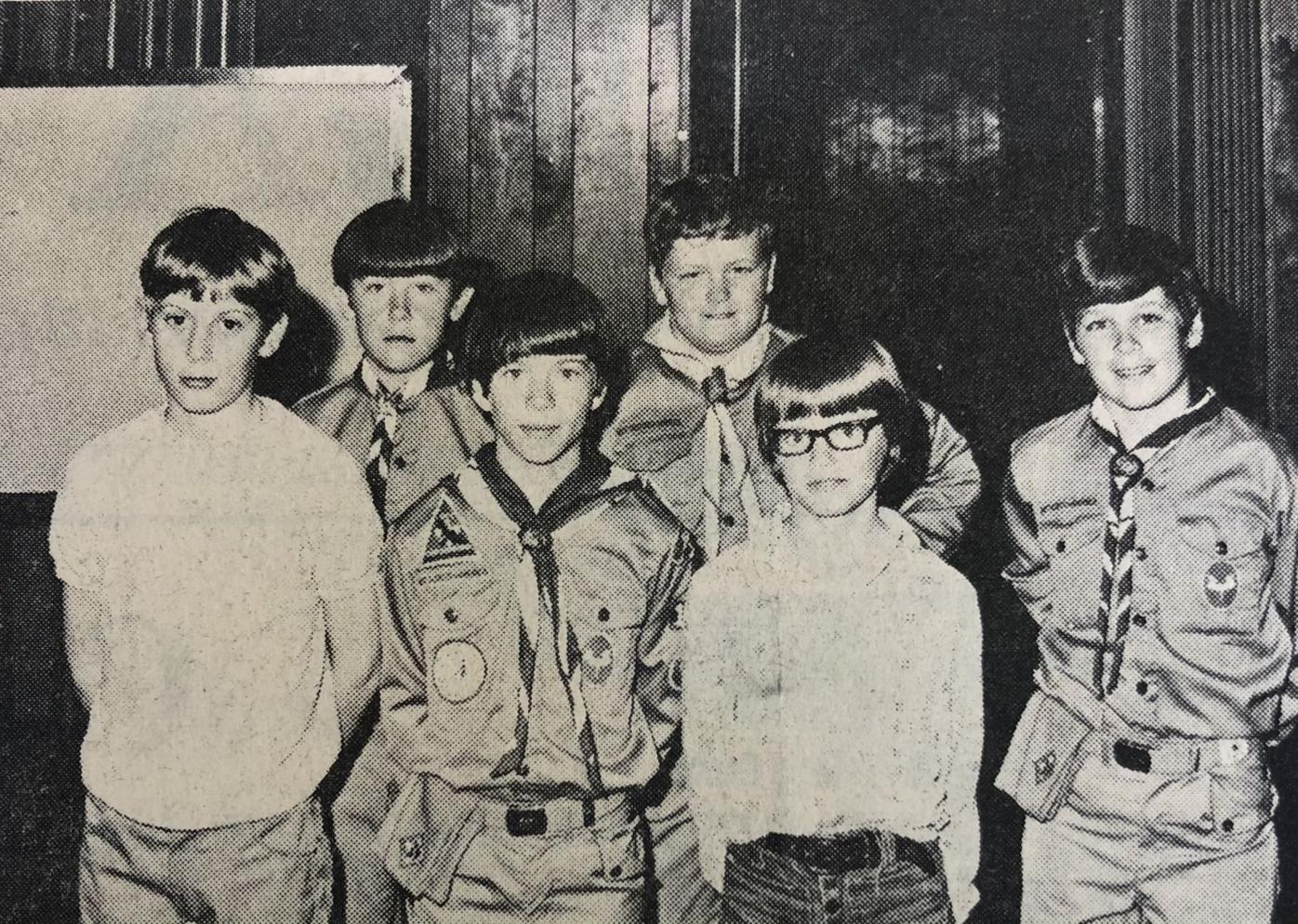 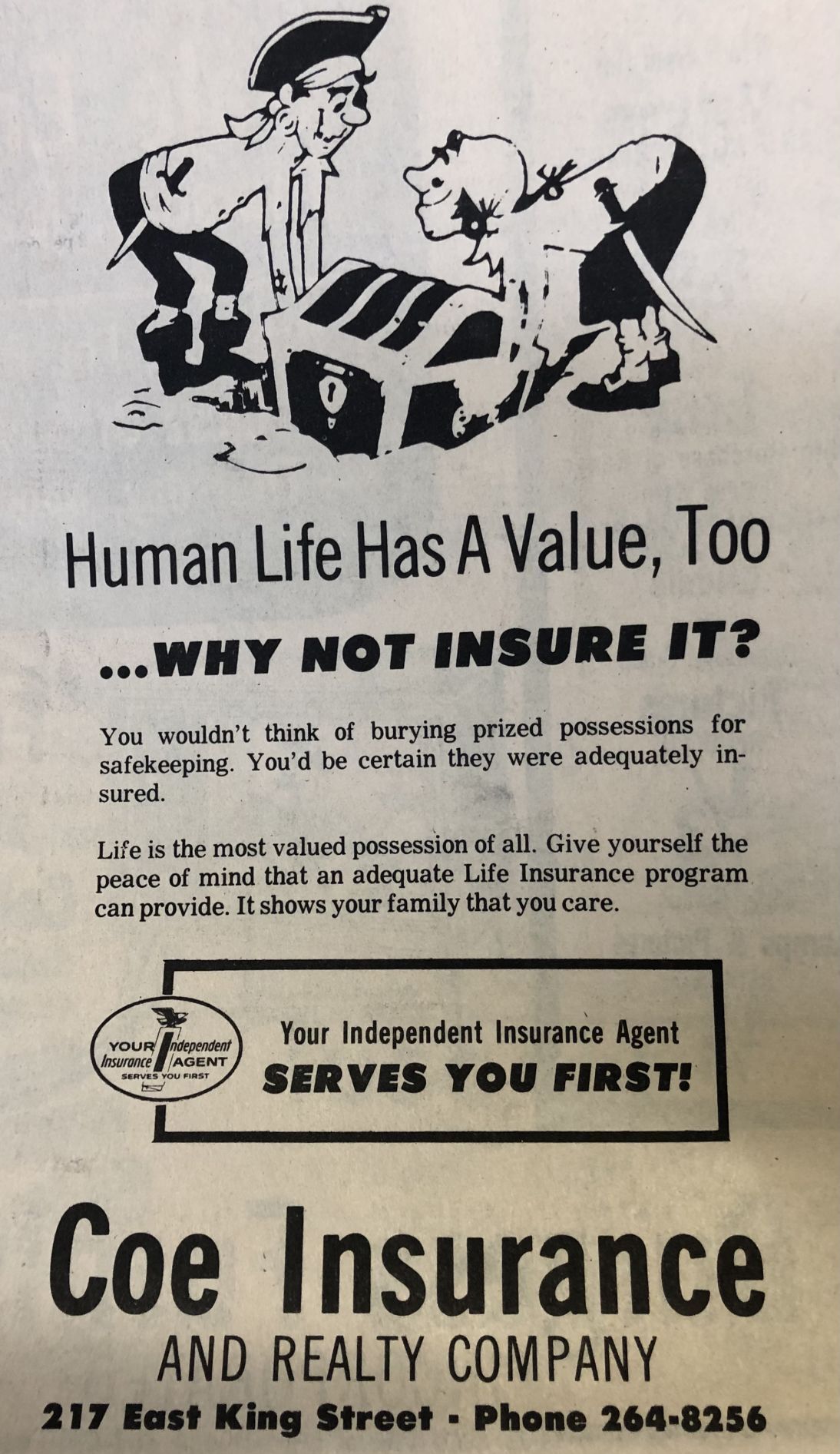 An ad for an insurance company as seen in a May 21, 1973 edition of the Watauga Democrat. 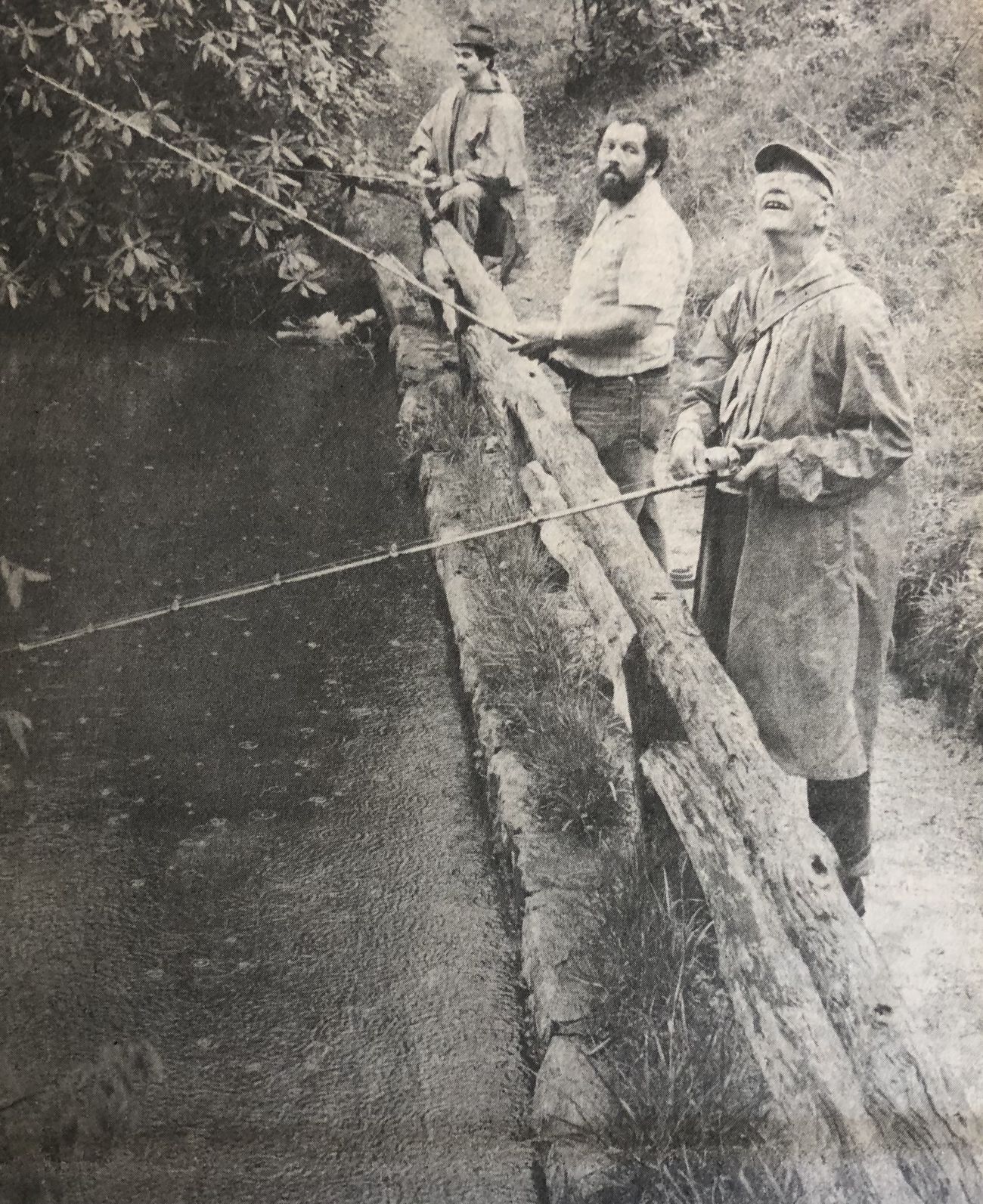 The trout were not biting for mark Laney, Gary Shook and Ralph Laney at Price Lake as seen in a May 16, 1983, edition of the Watauga Democrat. 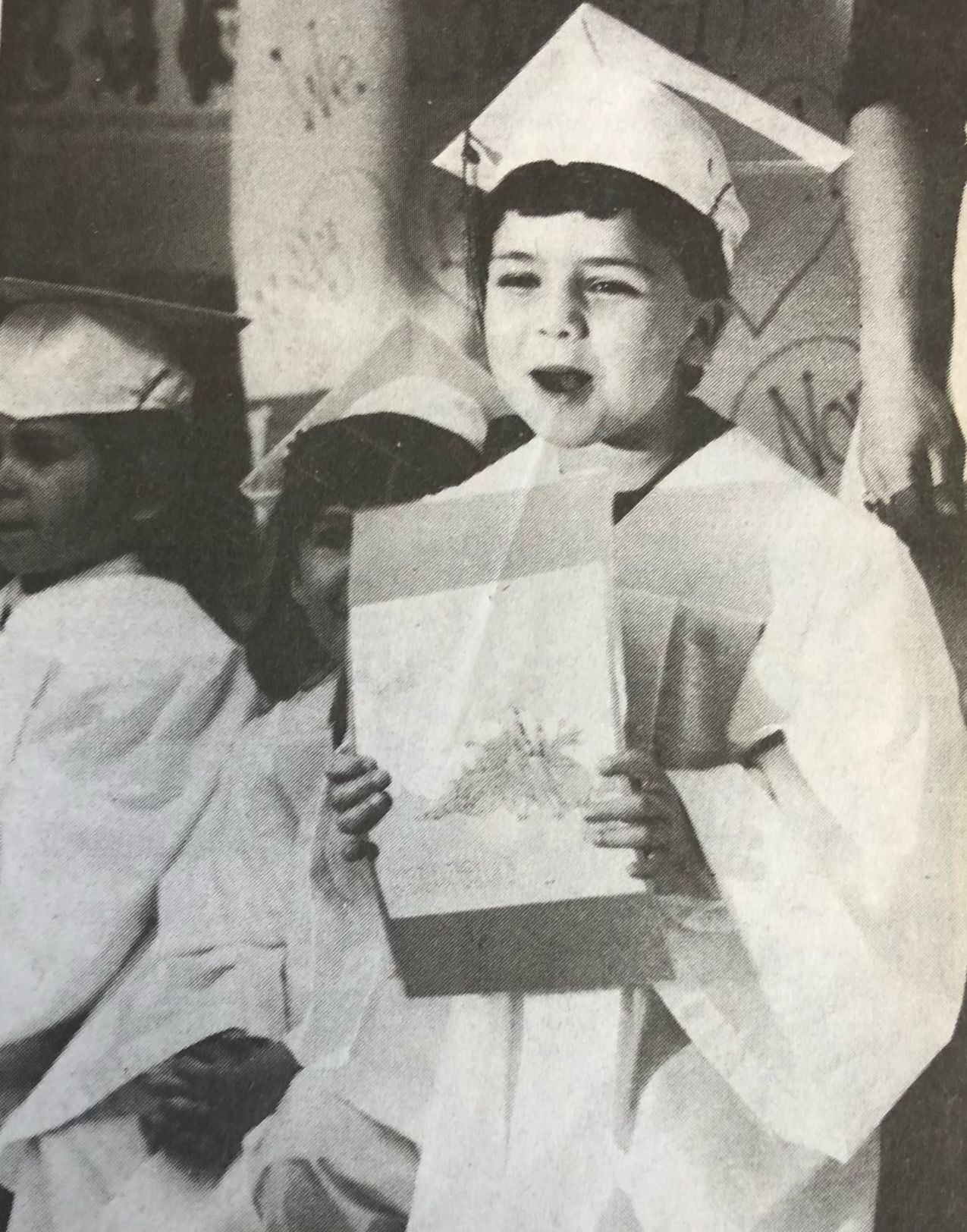 Tyler Beshears was elated during the Appalachian Child Care Center’s graduation as he held up his letter “U” for umbrella as seen in a May 14, 1993, edition of the Watauga Democrat. 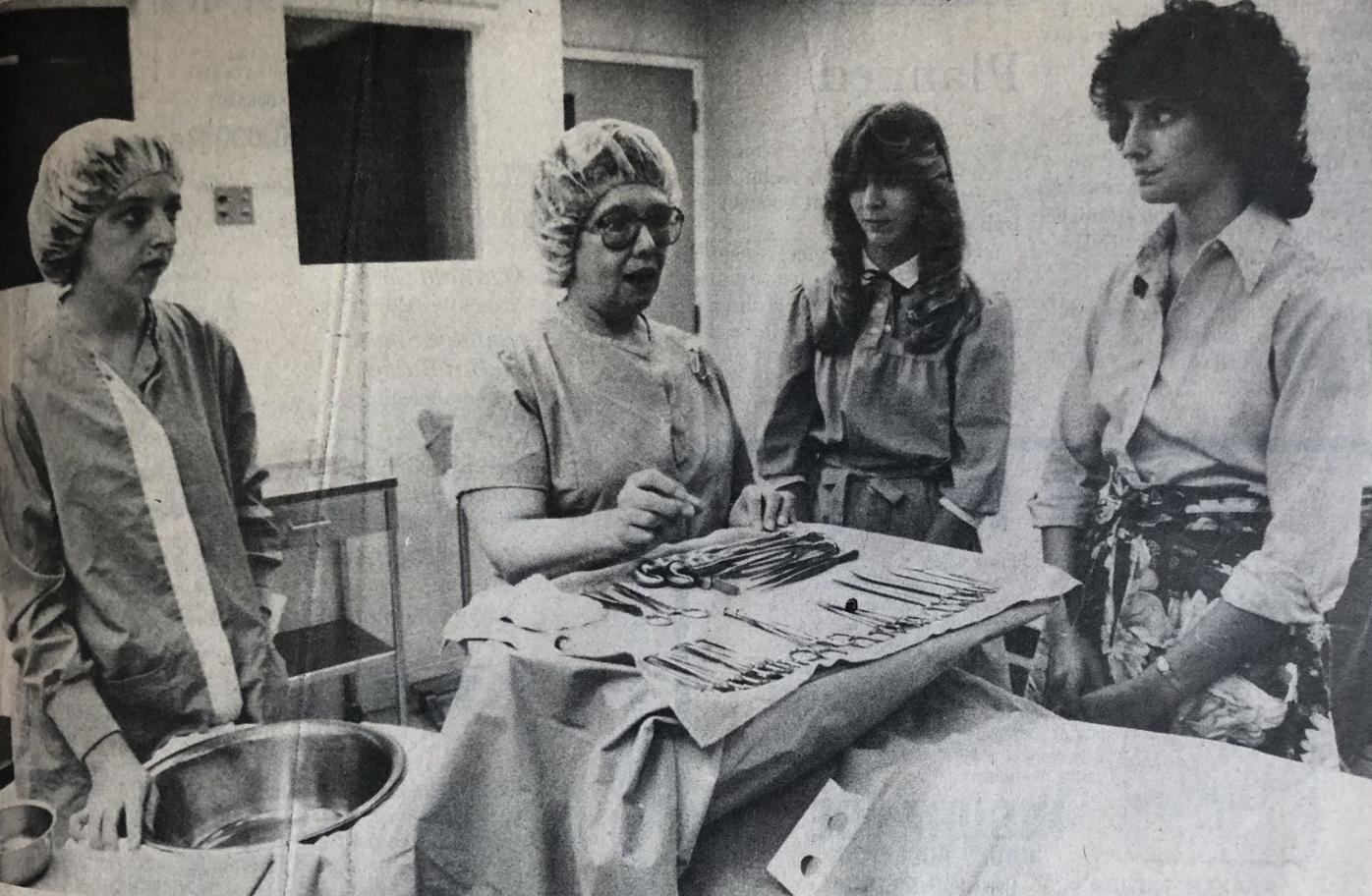 Darlene Greer and Margaret Arnette, operating nurses, explain operating procedures to Diana Porch and Denise Beldsoe during an open house at Watauga County Hospital as seen in a May 16, 1983, edition of the Watauga Democrat.

Approximately 100 rescues workers worked to free Dana Woodfin after he was buried up to his forehead in dirt as seen in a May 14, 1983, edition of the Watauga Democrat.

An ad for an insurance company as seen in a May 21, 1973 edition of the Watauga Democrat.

The trout were not biting for mark Laney, Gary Shook and Ralph Laney at Price Lake as seen in a May 16, 1983, edition of the Watauga Democrat.

Tyler Beshears was elated during the Appalachian Child Care Center’s graduation as he held up his letter “U” for umbrella as seen in a May 14, 1993, edition of the Watauga Democrat.

Darlene Greer and Margaret Arnette, operating nurses, explain operating procedures to Diana Porch and Denise Beldsoe during an open house at Watauga County Hospital as seen in a May 16, 1983, edition of the Watauga Democrat.

A former Vietnam prisoner of war spoke to kindergarten, first and second graders at Hardin Park elementary school in May 1973, according to a May 21, 1973, article in the Watauga Democrat.

“Lt. Col. Scott Morgan was captured in April 1965 while flying a photo reconnaissance plane at 200 feet above ground level and at 590 miles an hour,” the 1973 article stated. “He managed to evade the enemy for two and a half days before capture.”

“The first years of his captivity were in solitary confinement and in 1969 when the plight of the POW began to draw public attention, conditions began to improve,” the article stated. “Their food consisted of rice, boiled cabbage and sometimes pork fat, twice a day. For five years they were not allowed to exercise or to communicate with other prisoners so they worked out a code system that by tapping on the walls, they could communicate with each other. The only reliable news came from newly captured prisoners.”

According to the 1973 article, the first news the POWs heard of the moon landing came in 1970. A package was received which had packets of sugar with pictures of the men on the moon.

“Lt. Col. Morgan left the states in 1962 and returned (in 1973),” the article stated. “‘We were prepared for the long hair, but the biggest change has been the highway system,’” he said in the article.

“Through the year the first and second grades of Beth Carrin, Betty Elliott and Joanna Springs at Hardin Park Elementary School have been studying about our POWs and MIAs,” the article stated. “The class wore bracelets for Lt. Col Morgan and Sp-4 Arthur Wight of Lansing, Michigan.”

According to the article, a Freedom Tree was planted in honor of the POWs at Christmas time.

“At Thursday’s meeting Miss Joanna Springs presented Lt. Col. Morgan a certificate and one was sent to Sp-4 Wright’s family,” the article stated. “The children had discussed how best to show Lt. Col. Morgan that they are glad he is home. It was decided to have a birthday party for him to celebrate the eight birthdays he missed while a prisoner of war.”

“‘May God have mercy on your soul,’ Judge James Davis told a 19-year-old (man) Friday afternoon after a Watauga jury issued the first capital death penalty in the county since 1903,” according to a May 16, 1983, article in the Watauga Democrat.

According to the article, the defendant was a Boone resident who was found guilty of first-degree murder, first-degree burglary and armed robbery of a 64-year-old retired taxi cab driver who was stabbed to death at his home.

The article stated that two others pleaded guilty to involvement in the crime, and testified against the man in the four-day trial which began after five days of jury selection.

“Davis, a superior court judge from Concord, sentenced (the defendant) to 15 years in prison for the burglary conviction and 15 years for the armed robbery conviction, both of which were to run consecutively,” the article stated. “Death by asphyxiation was the mode of death ordered by Davis, who ruled that (the defendant) was to ‘inhale lethal gas of sufficient quantity...until the life is extinguished’ on July 15.”

An automatic appeal for the defendant was to begin, according to N.C. law, since the death penalty was issued, according to the article.

“The jury, made up of six women and six men, deliberated more than two hours before it sentenced the defendant to death,” the article stated. “The jurors’ faces were solemn; one female juror cried openly as the judge polled them individually on their verdict.”

“When Davis asked (the defendant) to stand for his formal sentencing, one of his relatives, seated on the second row, whispered ‘Be a man ... ,’” the article stated. “(The defendant) did not weep in open court, but appeared to be shaken.”

“Aggravating circumstances offered by the state on the murder charge included the heinous nature of the killing, the commission of the crime while committing two other felonies, and that the crimes were carried out to acquire money,” the article stated. “‘As far as I know, in the history of this county there have been only three persons convicted of first-degree murder,’” District Attorney Tom Rusher was quoted as saying in the article.

“‘Clarence Potter was the only man previously sentenced to death and that was in 1903,’ Rusher said, adding that the ruling was later overturned. Hanging was the original form of execution,” the article stated.

Editor’s note: According to the N.C. Department of Public Safety, the defendant was removed from death row and his sentence was reduced to life in prison in February 1985.

Dana Woodfin of Burnsville owed his life to many people, according to a May 14, 1993, article in the Watauga Democrat.

“Woodfin is alive today at Mission Memorial Hospital in Asheville thanks to quick action by three co-workers and efforts by Boone rescue workers and many others assisting in his six-hour ordeal,” the article stated. “The 37-year-old construction worker was trapped Wednesday afternoon by rock and dirt that covered him from his forehead to his feet in an accident on Bodenheimer Road at an Appalachian State University construction site.”

According to the article, Woodfin, a slight smile on his dirty face, dangled from the trench at about 11:40 p.m. and shouted to Sam Young, the son of his employer, “Am I getting paid for this?” and “Am I on overtime?”

“His comments brought smiles to many of the wet and tired rescue workers who had spent more than six hours to free the man,” the article stated. “Young nodded to Woodfin that he would be paid for the time while he was practically buried alive.”

“The accident occurred while Woodfin and co-workers Rufus Honeycutt, Homer Robinson and Gerald Wright were working in a trench near the Broyhill Inn and Conference Center at about 5:15 p.m.,” the article stated. “Honeycutt said ‘Woody (Woodfin’s nickname) tried to run from the ditch but the dirt just caught up to him.’ He added that the dirt ‘just started falling from the sidewalk.’”

“After he was pulled from the trench, Woodfin was transported to the Asheville hospital,” the article stated. “A hospital spokesman said Woodfin was listed in good condition following emergency treatment. He was said to be in a regular room.”

Original plans had been made to transport the injured man to Asheville by Mission Air Medical Ambulance helicopter, which arrived during thunderstorms that moved in and out of the area during the afternoon and evening hours, according to the article. It was learned at 10 p.m. that the helicopter was not able to leave the area because of inclement weather.

“Rain water running toward the trench had to be diverted because its course would have carried it to where Woodfin was trapped,” the article stated. “Storms returned later during the rescue, adding to the already dangerous conditions where dirt had been softened from wet conditions.”

“Each time the rains came, rescuers would cover Woodfin and rescuers with a large cover to protect them from the downpours,” the article stated. “While many rescue devices were used, Boone Police Chief Zane Tester said one piece of equipment was very important. He said rescuers used a trench box, a large metal device which can be placed in a trench or ditch not only to support bank sides, but also to allow rescuers to move from one area to another.”