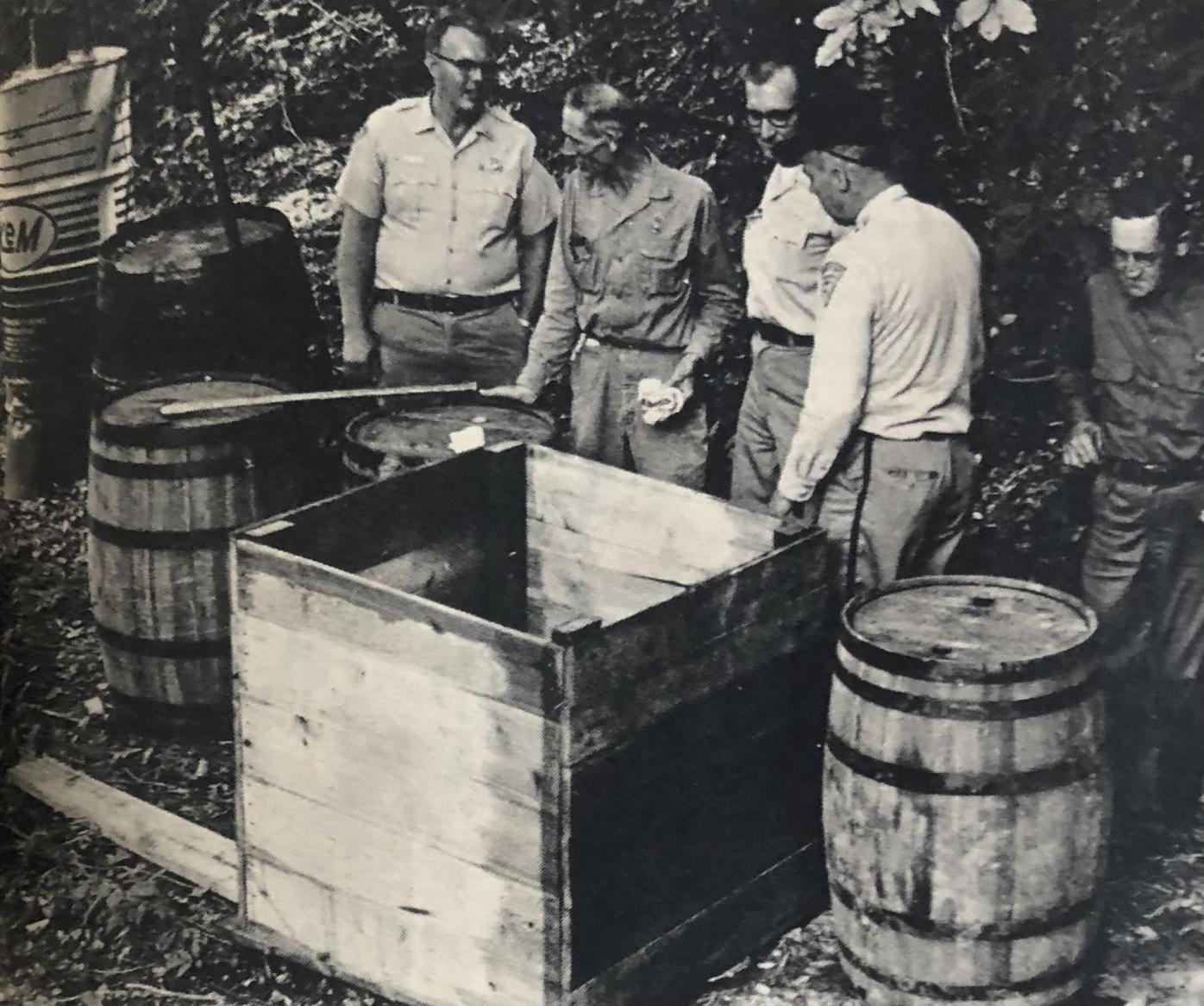 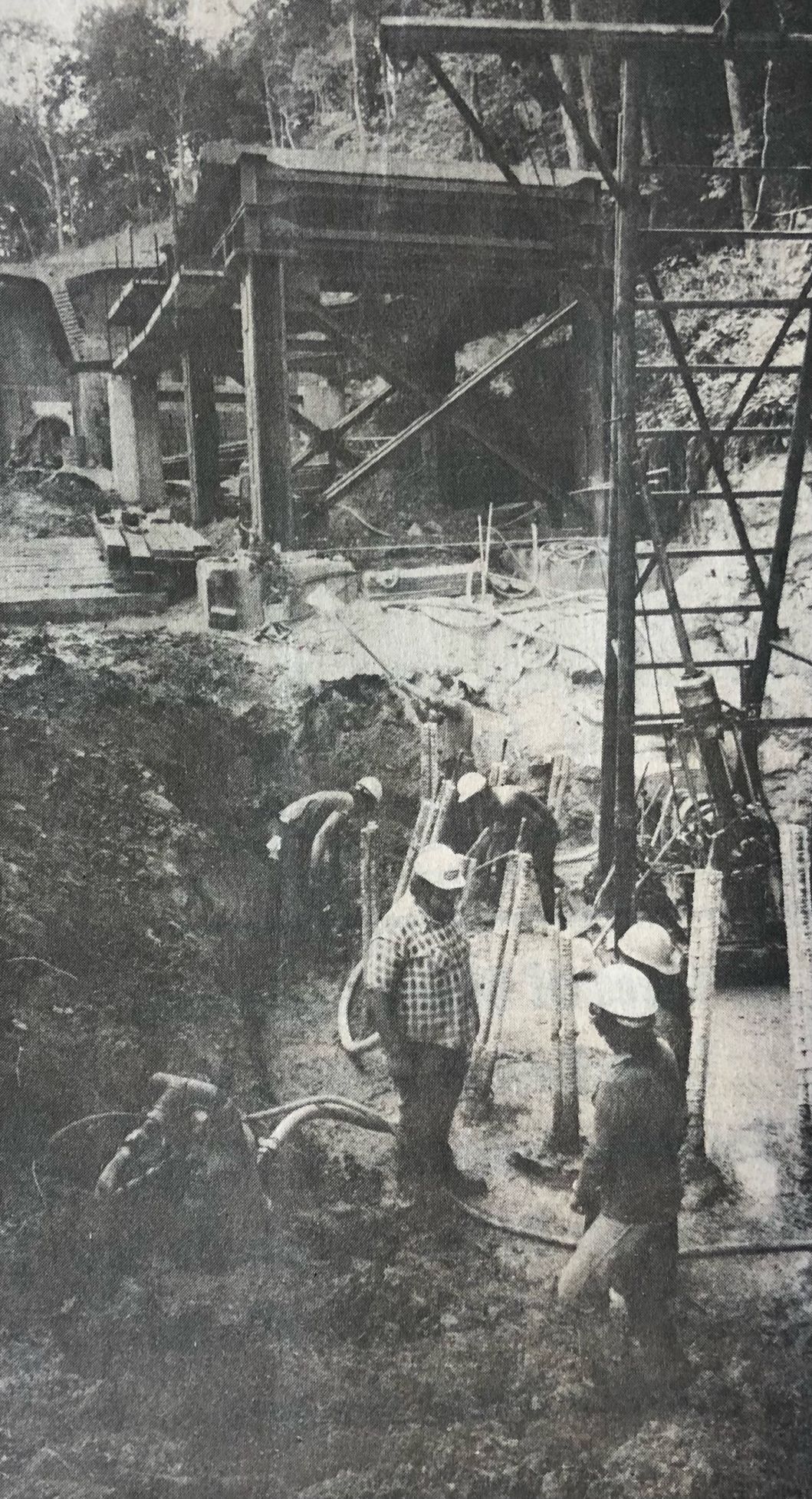 The first segment of the Linn Cove Bridge was hoisted up in 1980 as seen in a Sept. 1, 1980, edition of the Watauga Democrat. 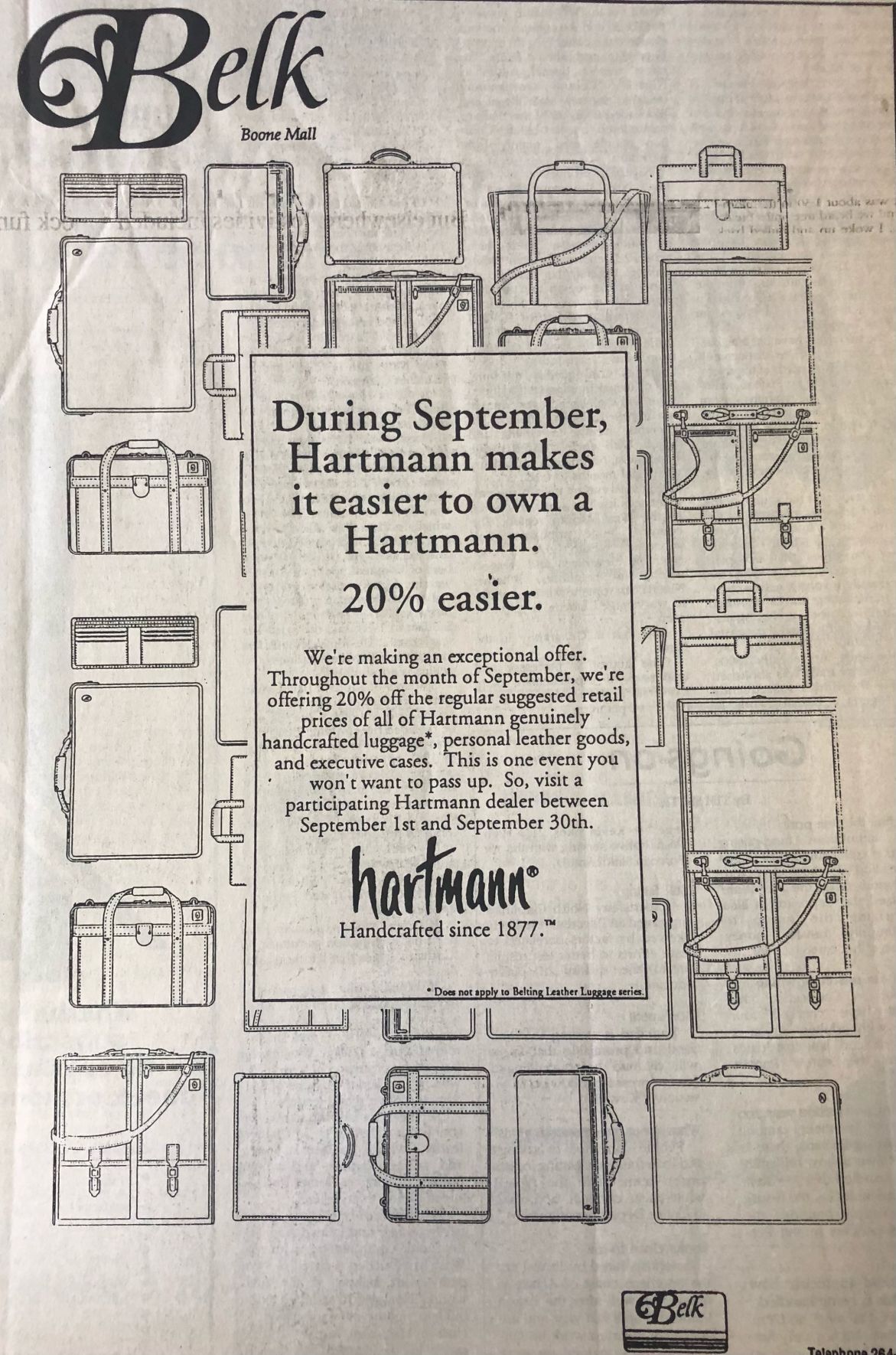 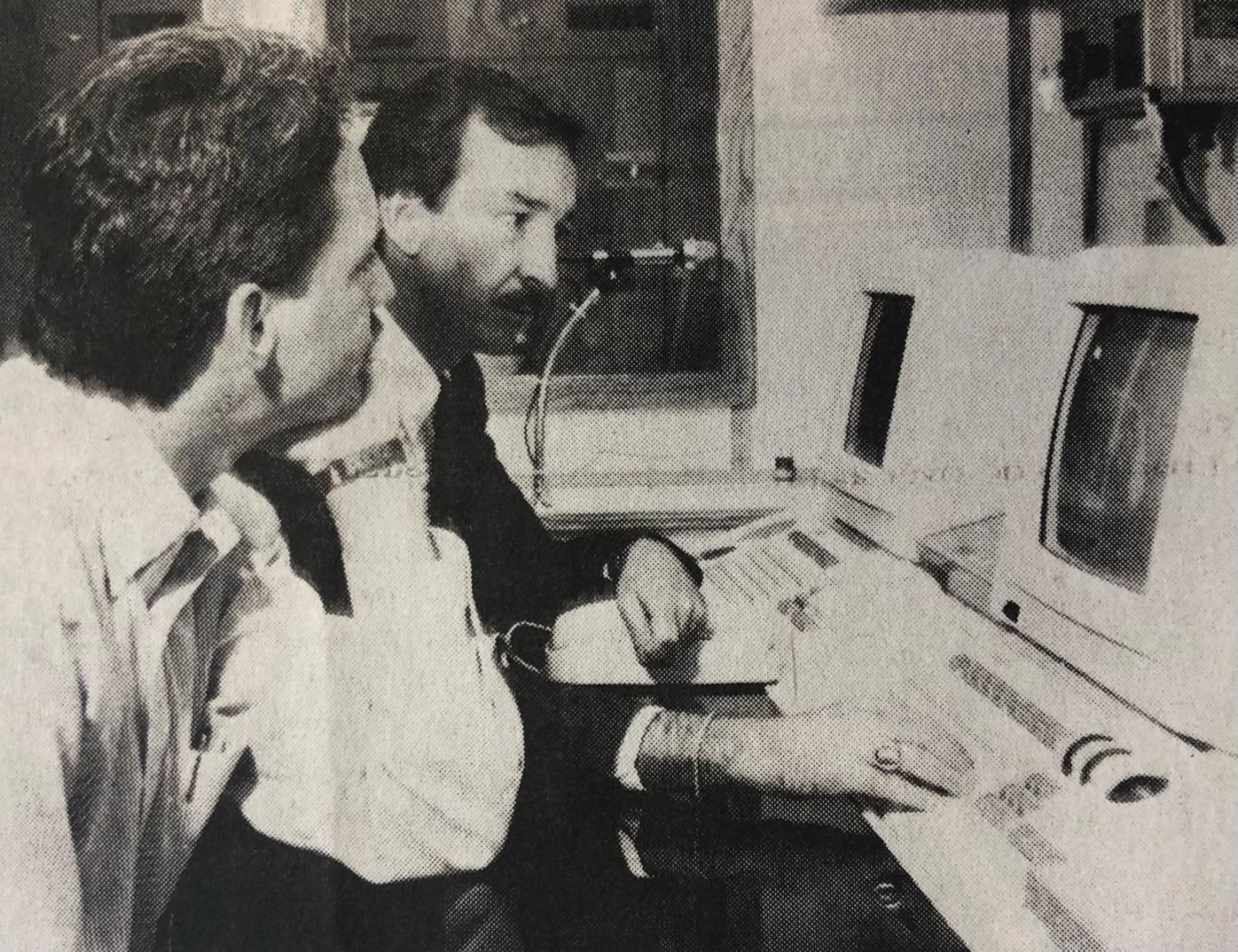 Technical Coordinator Ralph Carr demonstrates the MRI unit’s capabilities to a local physician as seen in a Sept. 3, 1990, edition of the Watauga Democrat. 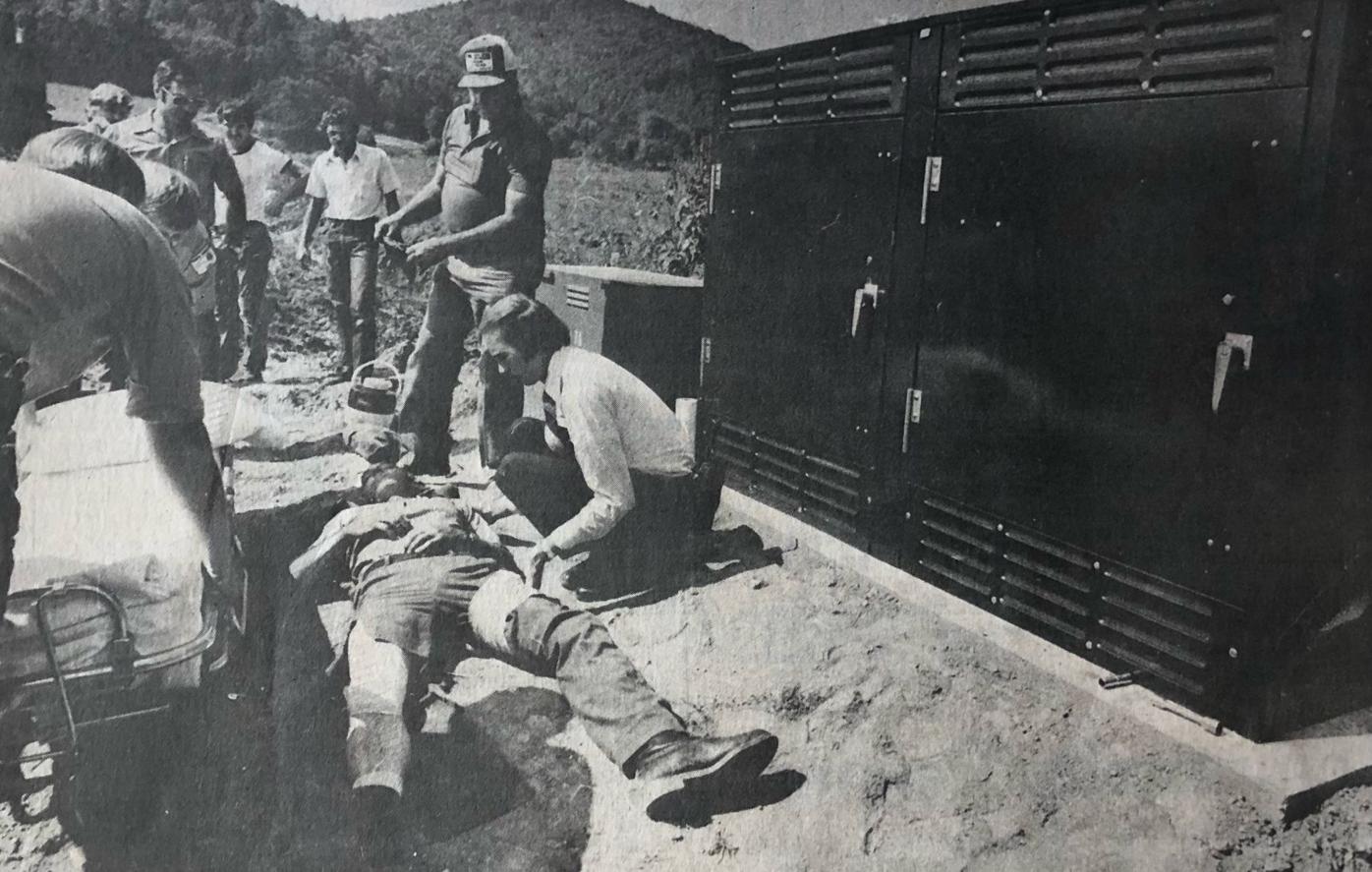 John Ward, an employee with Blue Ridge Electric Membership Corporation, received aid from Watauga Emergency Medical Service Thursday morning after having come in contact with 7,200 colts of electricity as seen in a Sept. 1, 1980, edition of the Watauga Democrat. 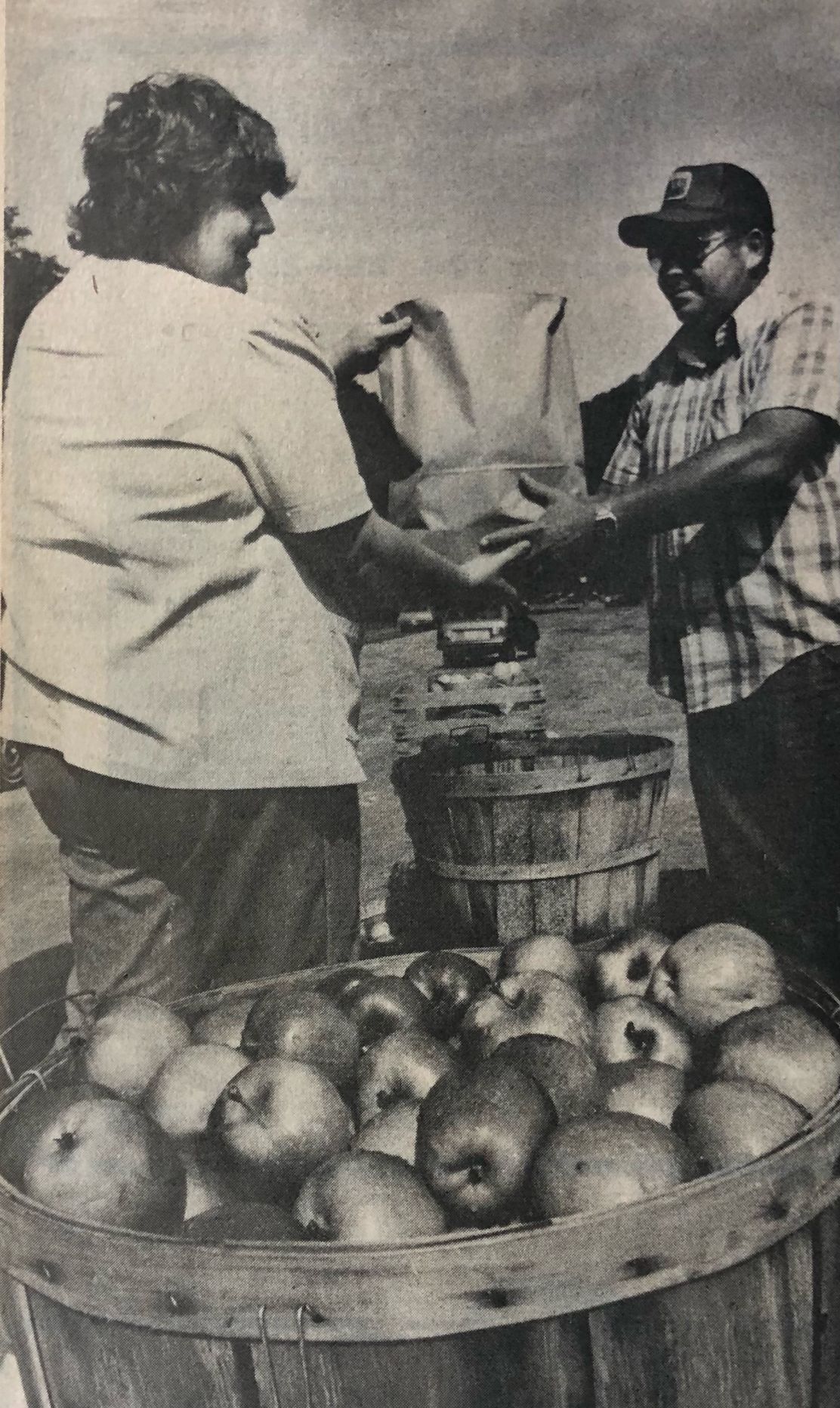 Glenda Brown of Salisbury stopped at one of the many roadside apple vendors for a bag of apples from Andy Barnes as seen in a Sept. 4, 1980, edition of the Watauga Democrat.

The first segment of the Linn Cove Bridge was hoisted up in 1980 as seen in a Sept. 1, 1980, edition of the Watauga Democrat.

Technical Coordinator Ralph Carr demonstrates the MRI unit’s capabilities to a local physician as seen in a Sept. 3, 1990, edition of the Watauga Democrat.

John Ward, an employee with Blue Ridge Electric Membership Corporation, received aid from Watauga Emergency Medical Service Thursday morning after having come in contact with 7,200 colts of electricity as seen in a Sept. 1, 1980, edition of the Watauga Democrat.

Glenda Brown of Salisbury stopped at one of the many roadside apple vendors for a bag of apples from Andy Barnes as seen in a Sept. 4, 1980, edition of the Watauga Democrat.

“That places the current population at 8,566, according to Frank Bateman, speaking from the Charlotte office of the United State Bureau of the Census,” the article stated. “Although the Bureau stated in June that Watauga County now has 22,660 persons — a 29,27 percent growth over 1960 — the break down in housing, income, ownership, age, education and other status has not yet been completed.”

According to the article, Bateman said at the time he had no total for the county’s other municipality, Blowing Rock, as the data for towns of more than 1,000 full-time residents.

“There were no toasts, no speeches, and no reporters present when the first segment of the Linn Cove post tension segmental bridge was eased into place on the backside of Grandfather,” stated an article in a Sept. 1, 1980, edition of the Watauga Democrat.

According to the article, the day passed generally unnoticed, “Oh about two weeks ago, I’d have to check,” said one of engineer who is working on what had been termed the “toughest bridge of its sort ever attempted in the world.”

“Another 23 segments stand lined up along an unopened portion of the parkway ready to go,” the article stated. Laura Winter, engineer for Jasper Construction Company, says they hope to have around 24 — enough to reach the second freestanding pier — in place before winter brings construction to a halt on the mountain, sometime in late October.”

“The concrete segments, which now stand like vast monoliths on the mountain, have been cast over the past months in a corrugated steel building located near the bridge site,” the article stated. “Wide enough to hold tow lanes of traffic, each segment has been cast of concrete in a mechanized steel form under the careful scrutiny of the project engineers.”

According to the article, a total of 153 were set to be used to span the quarter mile distance across the cove.

“Until they’ve placed a number of segments Winter said it will be hard to tell how long it will take to place the segments and when the next segment will be placed,” the article stated. “Down from the end of the bridge where the first segment was placed, workmen are busy drilling into the mountain, searching for hard rock to which the pilings are anchored with micro shaft — long steel rods wrapped together.”

All 153 segments were expected to be in place by the July 1983 completion date, according to the article.

Watauga County Hospital welcomed the future in September, 1990, when a mobile magnetic resonance imaging (MRI) unit made its first visit, according to an article in a Sept. 3, 1990, edition of the Watauga Democrat.

”The MRI is capable of producing high resolution images of inside the body without the use of radiation,” the article stated. “The procedure uses a strong magnetic field and FM radio waves to create images which, in some cases, are of high quality than those from a CT scanner.”

“There’s a magnetic field in the machine 10,000 times stronger than the Earth’s magnetic field,” said technical coordinator Ralph Carr in the article.

According to the article, the magnetic field aligns the hydrogen waves then excite them, casing some of the 21.35 MHz signal to be reflected back. These are picked up by antennas placed on or adjacent to the body.

“The MRI unit is best suited for making images of soft tissues, including the brain, spinal column, heart and abdominal organs,” the article stated. “It is also quite useful for detecting knee, shoulder and other joint injuries, which makes it a valuable tool for sports medicine.”

“MRI is not going to replace other diagnostic tools, but it will complement the other modalities,” Carr said in the article. “Now, down the road, it’s possible that it might take the place of heart (catheterizations).”

According to the article, during the procedure, the patient lies down on a table which slides into the center of the doughnut-shaped magnet. The procedure takes 20 to 45 minutes, during which time the patient can listen to music piped in from the on-board stereo system through airline-type headphones.

“If demand is large enough, one of the units could eventually be based in Boone,” the article stated.

“We really like it when the unit can stay in one place for a few days,” Carr said in the article. “The image quality goes up, it’s better on the technicians and better on the equipment.”