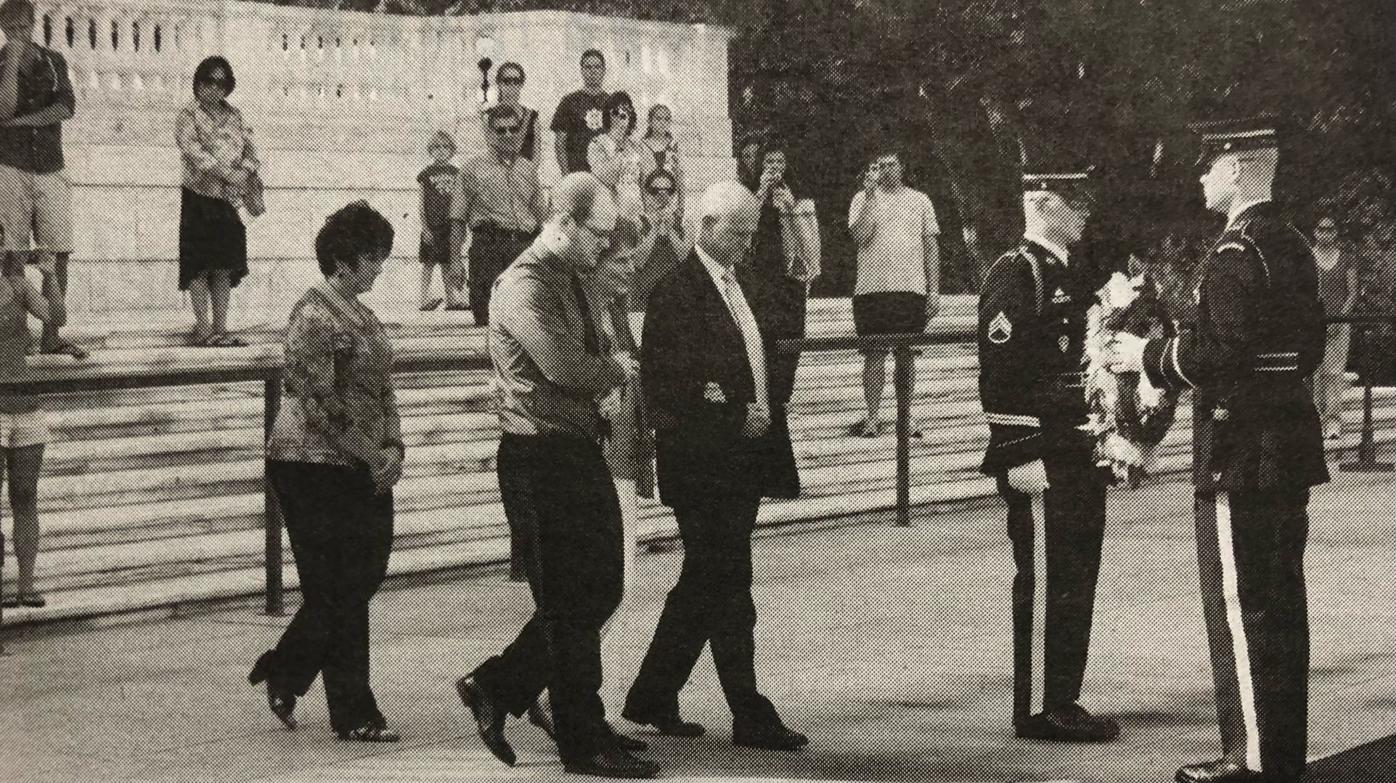 Barbara McDaniel of Boone, center, and other family members place a wreath at the Tomb of the Unknown Soldier as seen in a Sept. 23, 2011 edition of the Watauga Democrat. 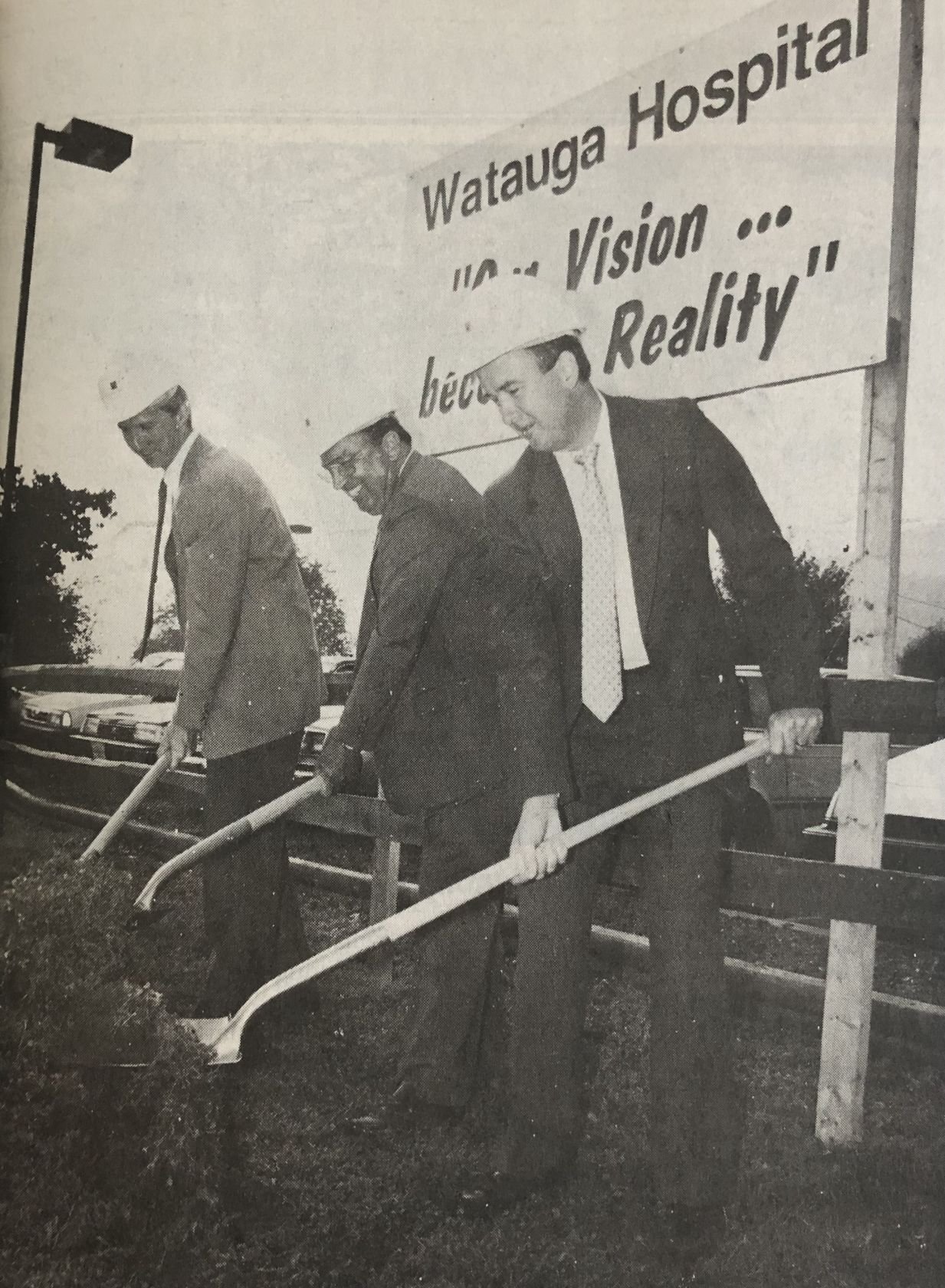 David Triplett, Paige Murray and Richard Sparks turned over the first shovelfuls of dirt in the new expansion at Watauga County Hospital as seen in a Sept. 20, 1991, edition of the Watauga Democrat. 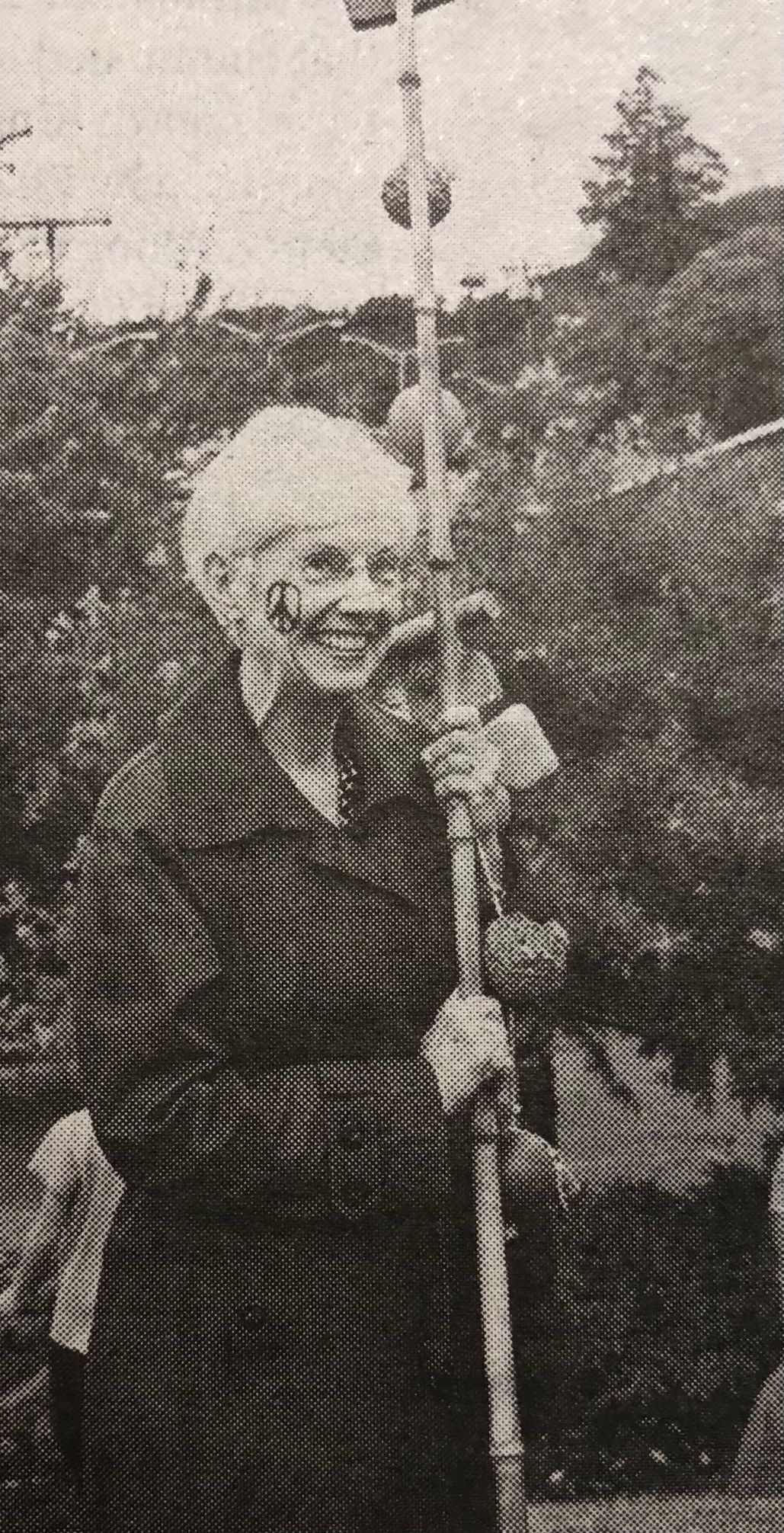 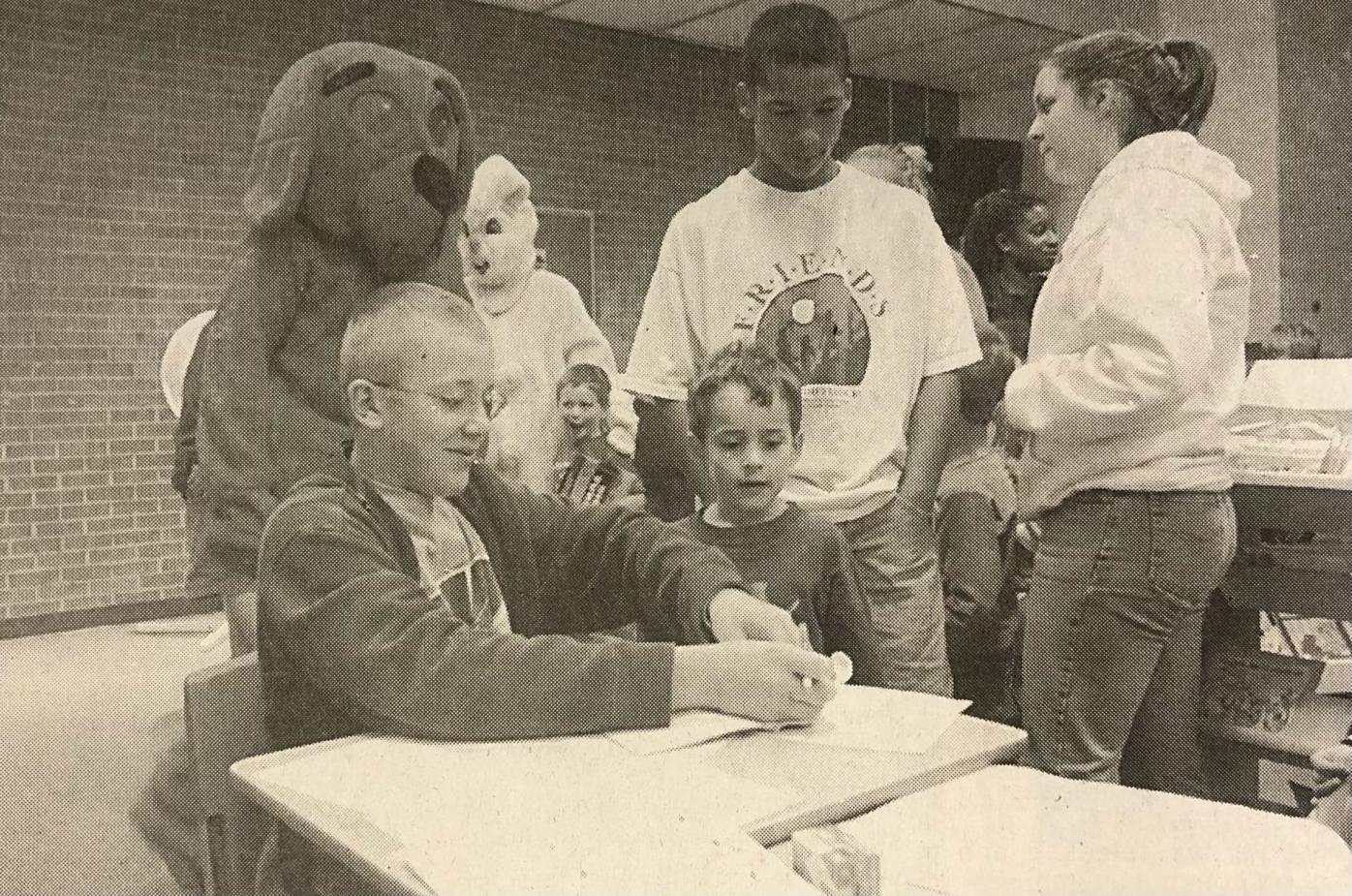 Seventh grader Jacob Norris encourages Matthew Osbourn to read as seen in a Sept. 26, 2001, edition of the Watauga Democrat.

Barbara McDaniel of Boone, center, and other family members place a wreath at the Tomb of the Unknown Soldier as seen in a Sept. 23, 2011 edition of the Watauga Democrat.

David Triplett, Paige Murray and Richard Sparks turned over the first shovelfuls of dirt in the new expansion at Watauga County Hospital as seen in a Sept. 20, 1991, edition of the Watauga Democrat.

Seventh grader Jacob Norris encourages Matthew Osbourn to read as seen in a Sept. 26, 2001, edition of the Watauga Democrat.

“Big parties are giving the Watauga County Sheriff a mammoth headache,” an article in a Sept. 20, 1981, edition of the Watauga Democrat stated.

“So far this month county officers have been called to 26 parties, some with crowds of nearly 2,000 people,” the article stated. “In the past, student parties have been a law enforcement problem, but mostly inside Boone. This year is different.”

“We’re seeing more of out-of-town parties than in previous years,” Sheriff Red Lyons said in the article. “Neighbors are complaining.”

According to the article, Lyons said the neighbors’ concerns are legitimate. He said in the article that lots of people need to sleep so they can go to work the next morning.

“That’s an inconvenience,” the article stated. “So is not being able to get to your house. But there is a safety problem, too. On several occasions party goers have completely blocked off narrow roads with their parked cars. Ambulances and fire trucks, if needed, also would be blocked.”

According to the article, Lyons said a judge could rule that a host was responsible for a home burning down because fire tricks could not get through.

“I don’t know if the people holding the parties know about the real risk they are facing,” he stated in the article.

“The parked cars have also created a problem for the officers themselves, who must leave their own cars to get to the party,” the article stated. “Sheriff Lyons said a third officer is often sent just to stay with the patrol cars to protect them from vandalism. Patrol cars have been scratched with keys or otherwise damaged when left unattended.”

“Each of the two colors on a patrol car cost taxpayers $300 if it has to be repainted, so the department has used touch-up paint whenever possible, Sheriff Lyons said,” the article stated. “Meanwhile, break-ins and cases of vandalism have increased, and the sheriff said that may be because officers have been pulled away from regular patrols and security checks to handle the party calls.”

According to the article, most of the people at the parties were students, but a number of local people who were not students were also seen at some of them.

“In recent years, one App State student was murdered and several people have been injured in violence that erupted after student parties were crashed by outsiders,” the article stated. “Several juveniles, some as young as 14 years old, also have been seen consuming alcoholic beverages at some of the parties, and this concerns the sheriff.”

According to the article, most of the parties were in rural houses, which were usually rented by four or five students.

“A Watauga County resident is seeking relief from the U.S. Environmental Protection Agency over the state’s pending issuance of an air quality permit to an area asphalt company,” an article in a Sept. 26, 2001, edition of the Watauga Democrat stated.

According to the article, Pam Williamson, a leader in the organization Citizens Against Pollution, filed an environmental justice complaint with the EPA’s Office of Civil Rights.

“The complaint states that on behalf of the citizens of Watauga County, she is seeking remedy by EPA under a presidential executive order and Title VI of the Civil Rights Act of 1964,” the article stated.

“Our complaint involves the impending issuance of a N.C. Department of the Environment and Natural Resources, Division of Air Quality’s permit to Boone Asphalt Company Inc., which is currently under review by the DAQ,” Williamson was quoted as saying in the article. “We contend that the issuance of the permit violates EPA’s Title VI regulations in that DAQ is required to follow EPA guidelines and regulations, and that this permit approval will disproportionately affect a low-income community.”

According to the article, the communities that would be most affected by the DAQ permit sit within a one-mile radius of the proposed plan and are mostly low-income housing and trailer park communities. The article stated the plant was set to be built on Landfill Road just east of Boone.

“In North Carolina, asphalt plants must first secure a permit from the state’s DAQ in order to construct and operate a plant,” the article stated. “Part of the permit application process includes a public hearing and the Boone Asphalt Company’s hearing was held in Boone at the end of August.”

According to the article, the complaint that Williamson filed with the EPA is similar to a document that was presented by Stella Anderson, a resident from near the proposed site, during the hearing.

“The Broyhill Inn and Conference Center remains open, despite the closure of the restaurant portion, said Greg Lovins, Appalachian State University’s interim vice chancellor for business affairs,” an article in a Sept. 23, 2011, edition of the Watauga Democrat stated.

“Sunday was the last day for the restaurant, a casualty of unprecedented budget cuts,” the article stated. “The center’s imminent closure, a reaction to those cuts, was announced in August. Administration officials told employees the facility would transition to student housing after the all semester.”

According to the article, no one had been let go so far.

“We were able to move restaurant employees,” Lovins was quoted as saying in the article.

“Those employees have been transitioned to food service,” the article stated. “As for the Broyhill’s inn staff, transition plans have not been made.”

“We really can’t comment on that right now,” Lovins was quoted as saying in the 2011 article. “We’re still working on a transition plan. We have not laid anyone off.”

According to the article, there had been no word on when the inn portion of the facility would close operations.