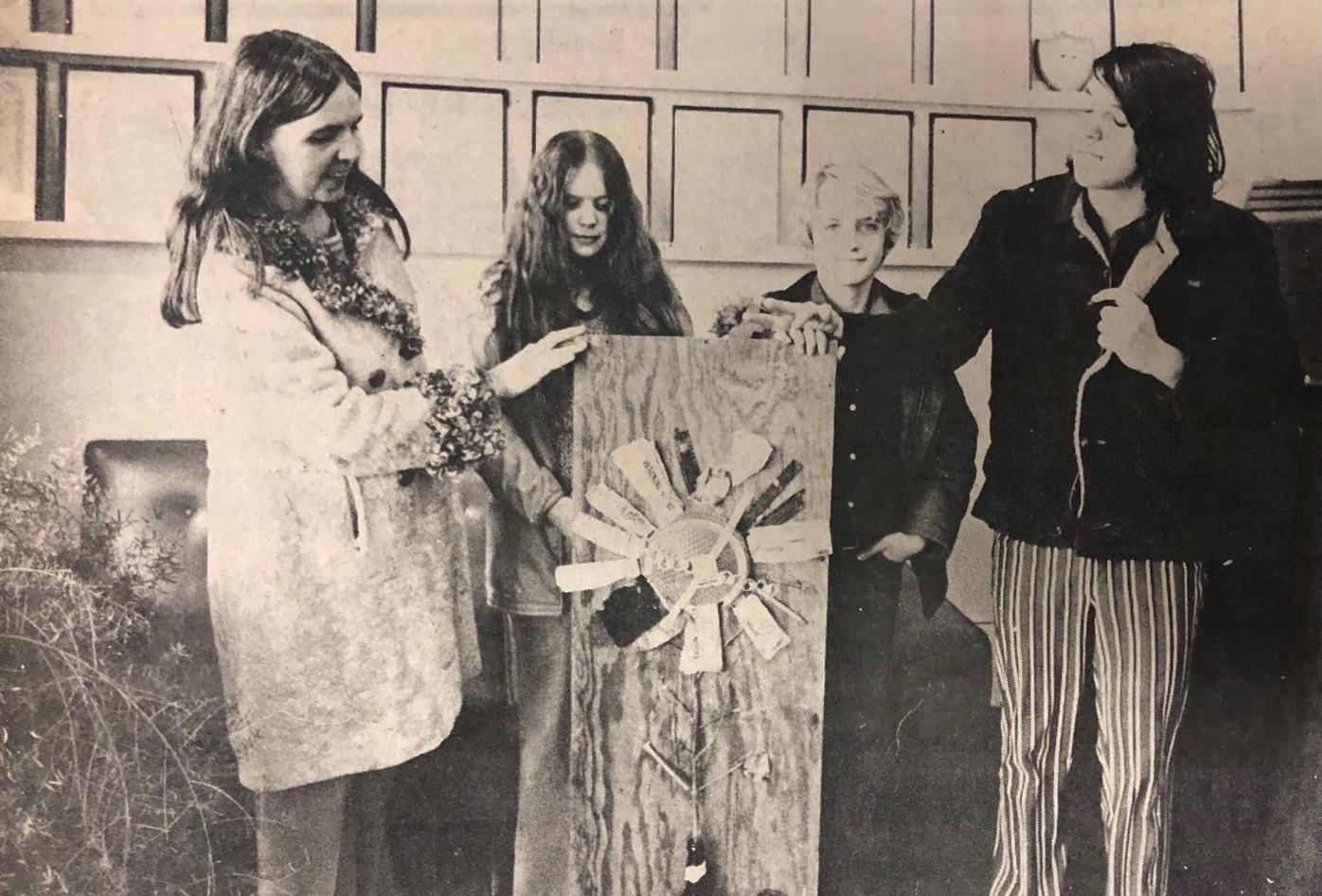 Sylvia Pittman (left) and Karen Laney, Maurice Steenland and David Pittman show off a sunflower collage made up of debris and rubble picked up during a pollution-oriented projected as seen in a March 22, 1973, edition of the Watauga Democrat. 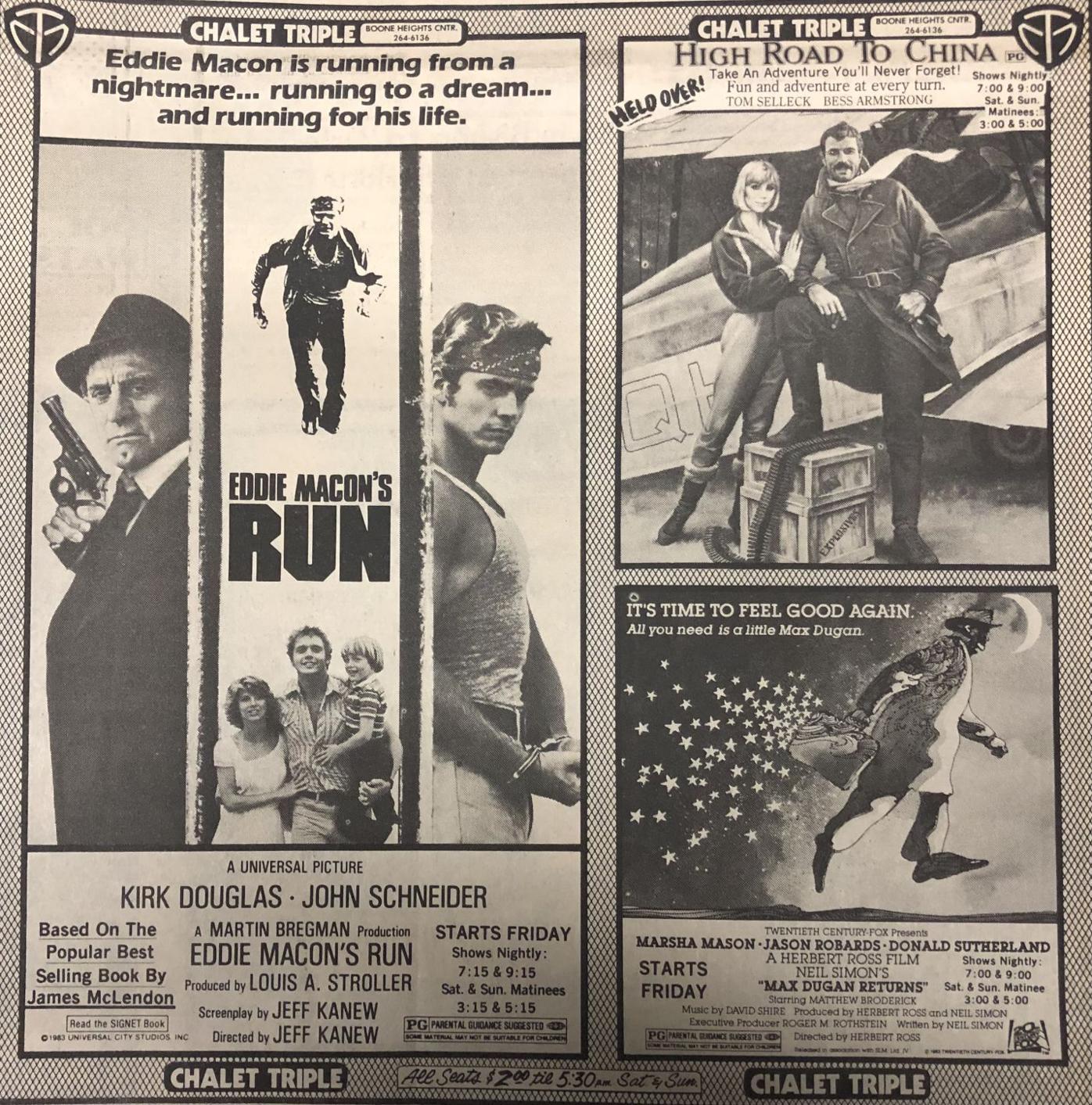 A movie advertisement as seen in a March 23, 1983 edition of the Watauga Democrat. 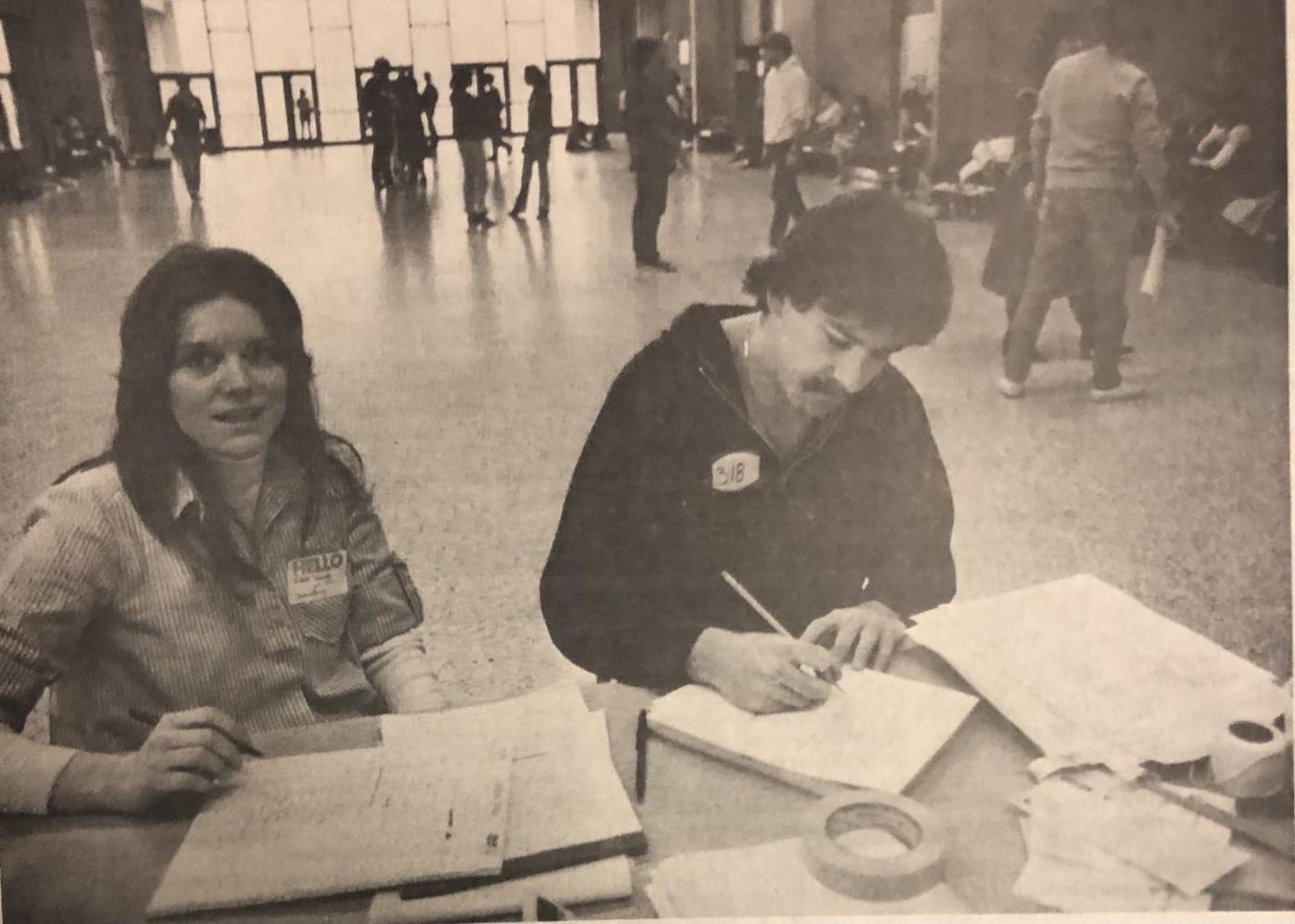 Rhonda Winkler and Mike Daniel assist with registration of applicants for the “Horn in the West” play as seen in a March 23, 1983, edition of the Watauga Democrat. 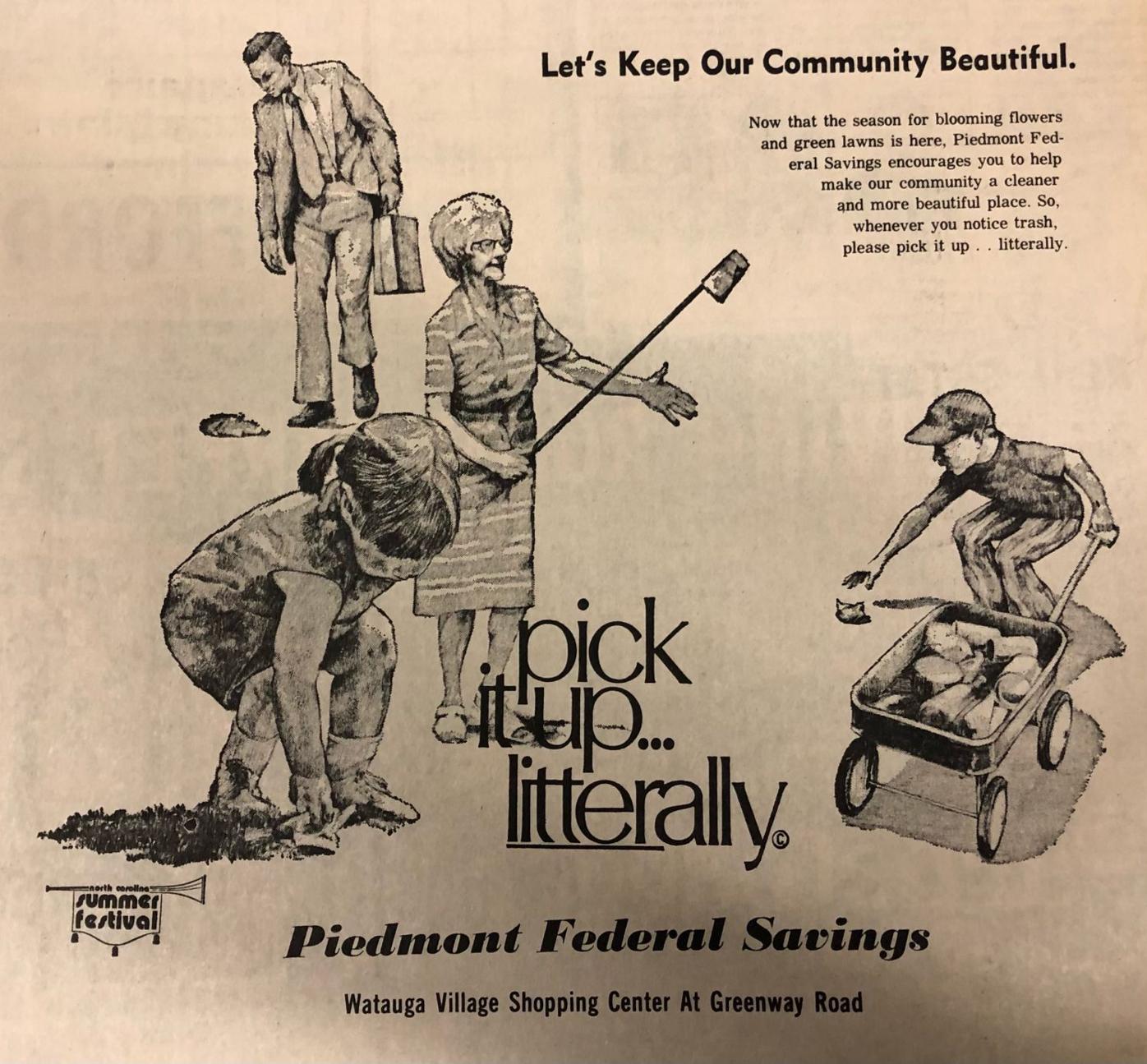 An advertisement for a bank as seen in a March 22, 1973, edition of the Watauga Democrat. 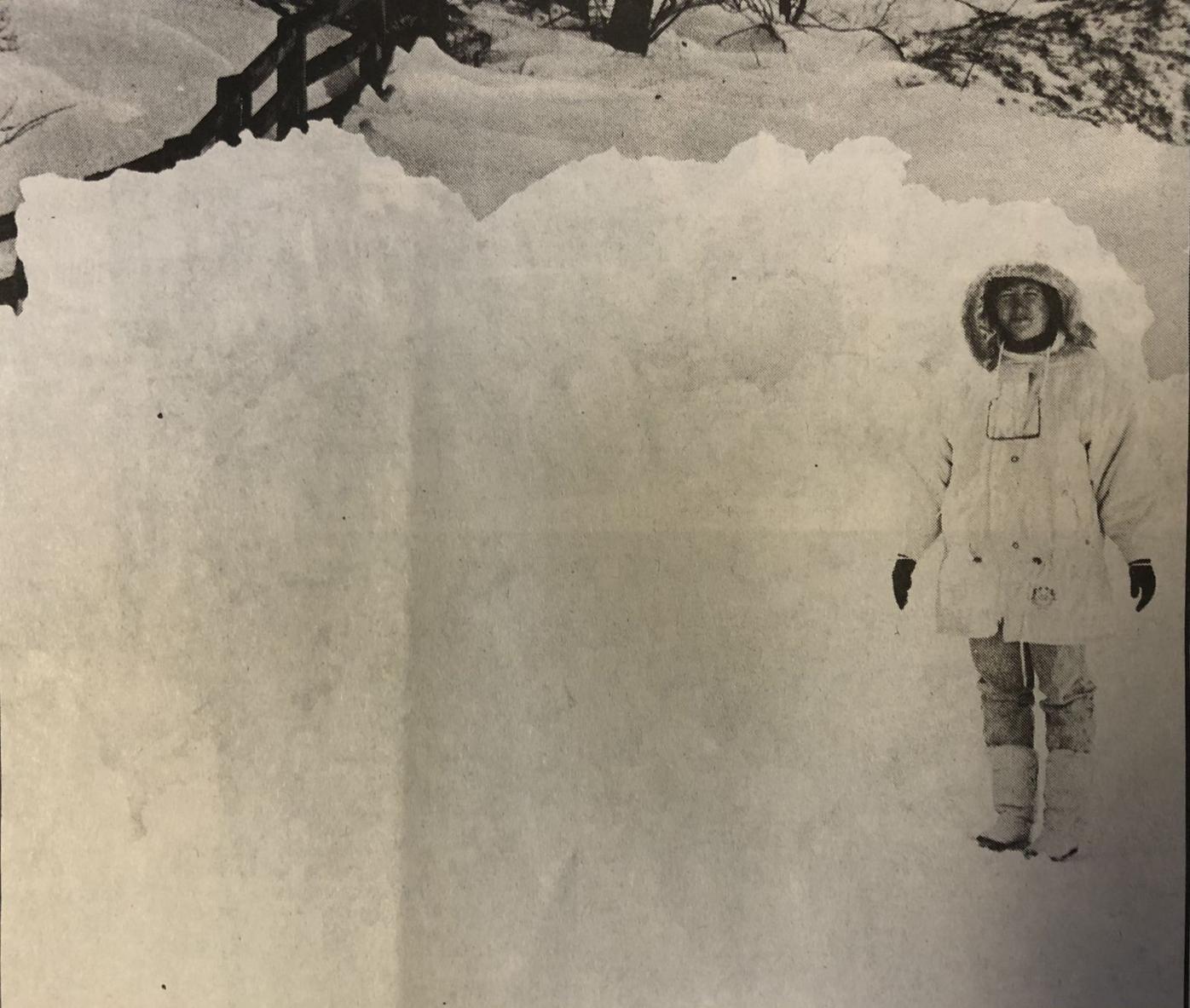 Jamie Wilson stands beside a bulldozed pile of snow in a March 17, 1993, edition of the Watauga Democrat.

Sylvia Pittman (left) and Karen Laney, Maurice Steenland and David Pittman show off a sunflower collage made up of debris and rubble picked up during a pollution-oriented projected as seen in a March 22, 1973, edition of the Watauga Democrat.

A movie advertisement as seen in a March 23, 1983 edition of the Watauga Democrat.

Rhonda Winkler and Mike Daniel assist with registration of applicants for the “Horn in the West” play as seen in a March 23, 1983, edition of the Watauga Democrat.

An advertisement for a bank as seen in a March 22, 1973, edition of the Watauga Democrat.

Jamie Wilson stands beside a bulldozed pile of snow in a March 17, 1993, edition of the Watauga Democrat.

The town of Boone was getting a new post office, according to a March 22, 1973, article in the Watauga Democrat titled “Boone will be provided new central post office, two years needed for completion.” At best, it was projected the new facility would not be ready for occupancy for at least two years.

“Earl Norris, Postmaster of Boone, announced Tuesday the results of a meeting held Monday with postal officials and a group of interested citizens,” the 1973 article stated. “The postmaster explained that Boone was approved for a new building in 1966 and that the postal service had considered several sites. Three of the most recent sites included a tract on the (N.C) 105 Extension; a tract on State Farm Road, and another tract in downtown Boone a block away from the present facility.”

According to the article, none of the sites were ideal and the search for a property would continue. The article stated that officials at the meeting had certain criteria for the new post office site.

In the article, Norris stated that the prime location would be in the vicinity of N.C. 105 and U.S. 321 and that the new facility would require no less than 87,000 square feet of land.

According to the article, the new facility meant that five people would be added to post office staff upon moving to the new building.

According to a March 25, 1983, article in the Watauga Democrat titled “Area towns plan ABC referendums,” North Carolina mountain towns could become a little wetter in the spring of ‘83, but it would have nothing to do with precipitation.

“What it has to do with is alcohol, or more specifically, ABC referendums,” the 1983 article stated. “Although two of the last three elections in the northwestern mountains failed — during the last year voters in Boone defeated an effort to establish a liquor store, while in West Jefferson an ABC store referendum was defeated after voters earlier approved beer in wine sales.”

According to the article, Banner Elk could soon become the wettest spot as it could become the first town in Northwestern North Carolina in modern times to legalize the sale of mixed drinks.

“Supporters estimate that liquor-by-the-drink sales would bring in some $60,000 in annual revenues for the town, and (Mayor David) Tate has said that it would produce additional investment, more jobs, increase development, and provide a service desired by the town’s tourists,” the article stated.

The article also quoted those who were opposed, saying it would result in the greater availability of liquor, which would “mean more DUIs” according to one person quoted in the 1983 article.

“State ABC officials have said that approval of the mixed-drink referendum will enable those establishments qualifying for a liquor-by-the-drink to also sell beer,” the article stated. “Although Banner Elk does not presently allow the sale of beer, it does have a state-run liquor store and allows the off-premise sale of wine.”

An article from a Mach 17, 1993, edition of the Watauga Democrat titled “Blizzard of ‘93 buries county; hundreds stranded” details how a blizzard blew into the High Country and buried some parts of Watauga County in up to four feet of snow. Some parts saw up to 14 feet due to high winds piling up the snow, according to the article.

“Temperatures did not climb out of the teens, and wind chills bounced above and below zero all weekend,” the article stated. “The storm brought almost all activity in the county to a standstill. Roads were closed or left impassable, and drivers were left stranded by high snow drifts and blinding ‘whiteouts.’”

According to the article, widespread power outages — 6,000 at its peak — were reported and several motorists and vacationers were left stranded. The governor at the time, Jim Hunt, declared Watauga and 39 other counties as disaster areas.

“Watauga County leaders declared a state of emergency at 12:30 p.m. Saturday and later imposed a curfew to keep residents and visitors inside and out of the way of emergency personnel who battled to keep the roads open and power on,” the 1993 article stated. “By Monday morning, the 37-hour curfew had been lifted and some activity had resumed normally.”

The article stated that some people had to sleep in their cars and the Boone Police Department had received 3,000 calls from residents and from people across the state curious about the weather.