Betsy Hawkins practices with the Appalachian Dance Ensemble for an upcoming concert in February 1982. 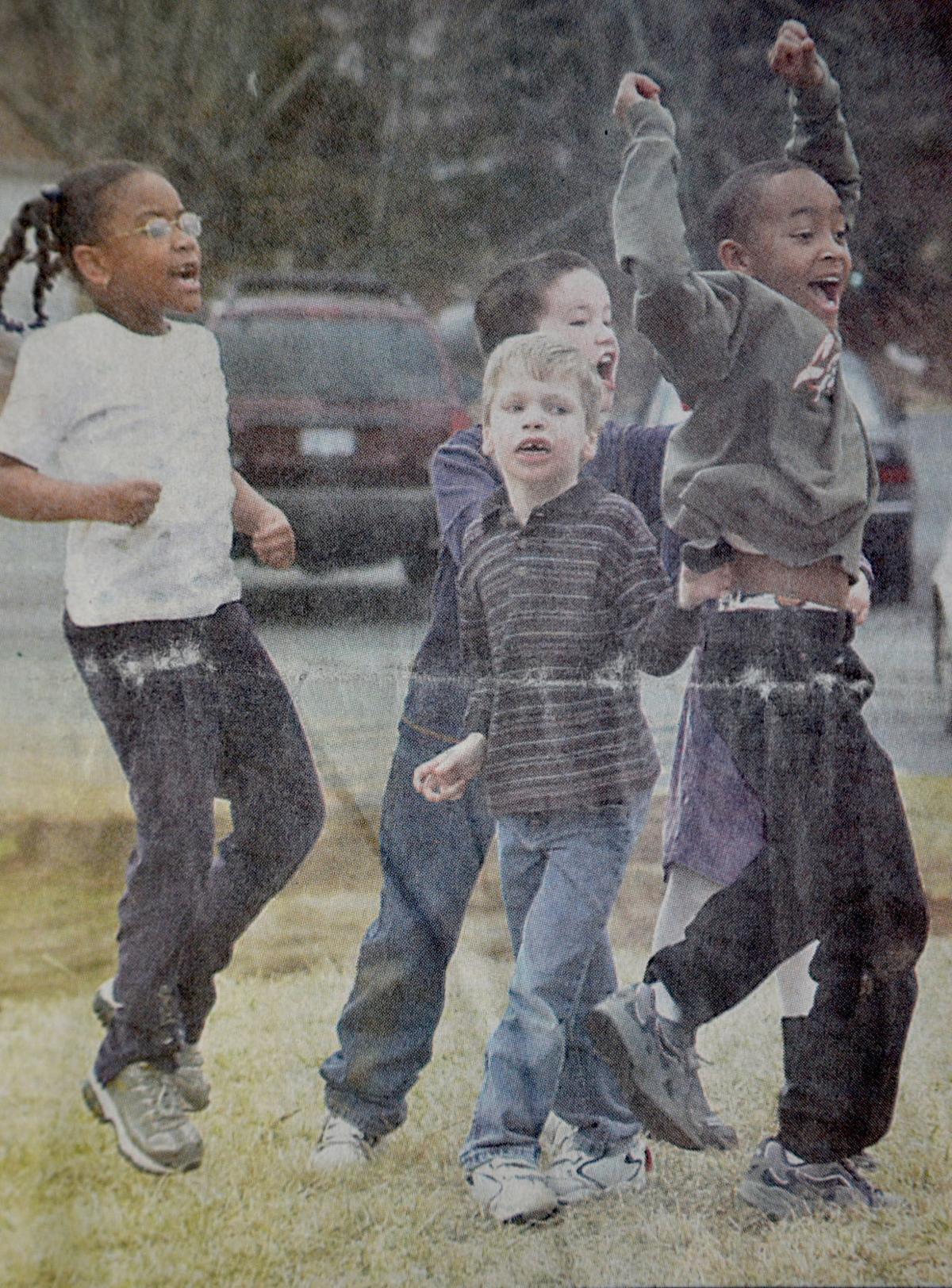 Hardin Park first-graders Jessica Langham, Grant Hudson, Bradley Parker and LaShod Horton cheer on their classmates during a game of kickball in February 2002. 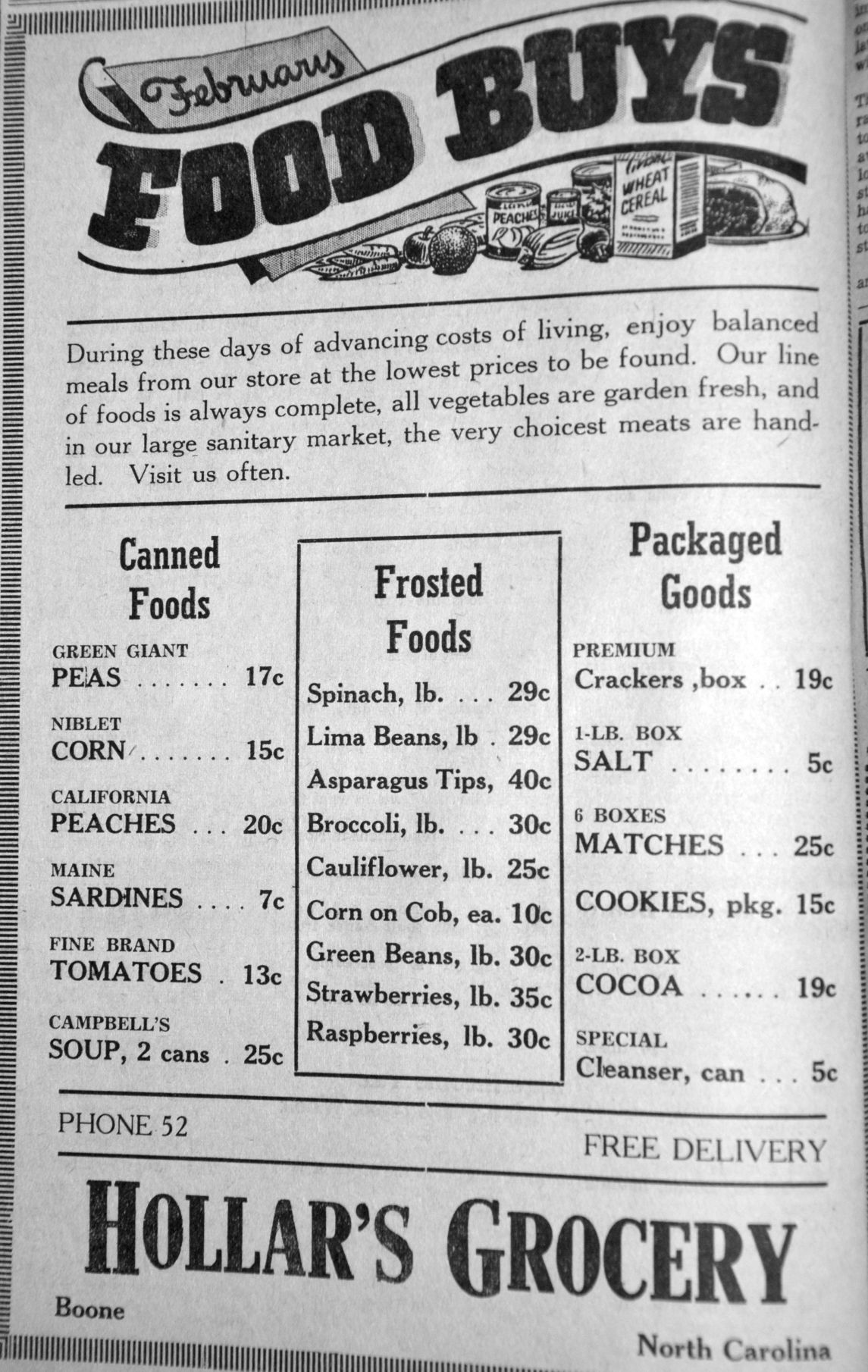 A 1942 advertisement shows several products that could be bought from Hollar’s Grocery in Boone. 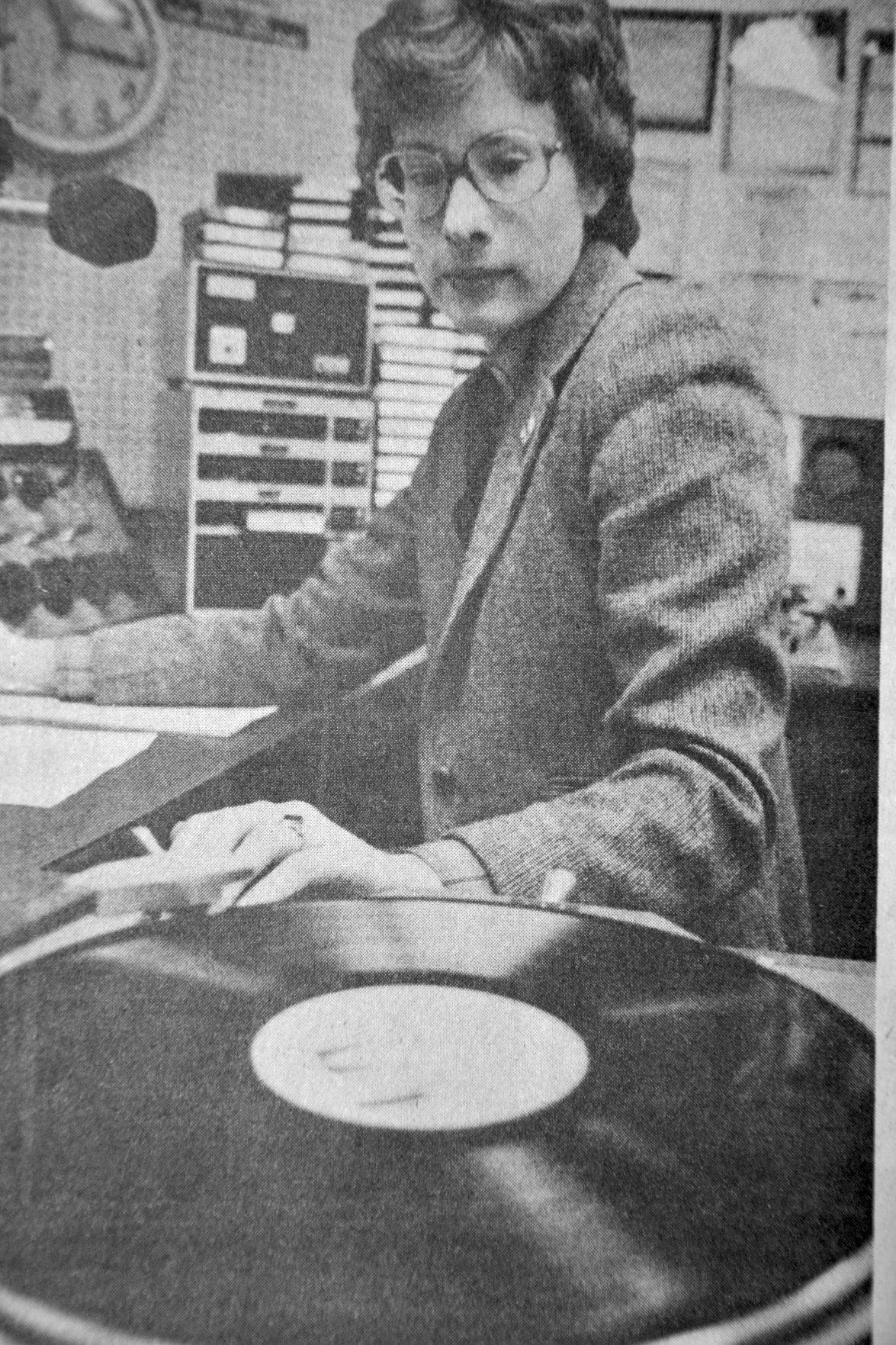 Jane Nicholson, the operations manager for the WATA radio station in Boone, is named Young Career Woman by the Boone Business and Professional Women’s Club in February 1982. 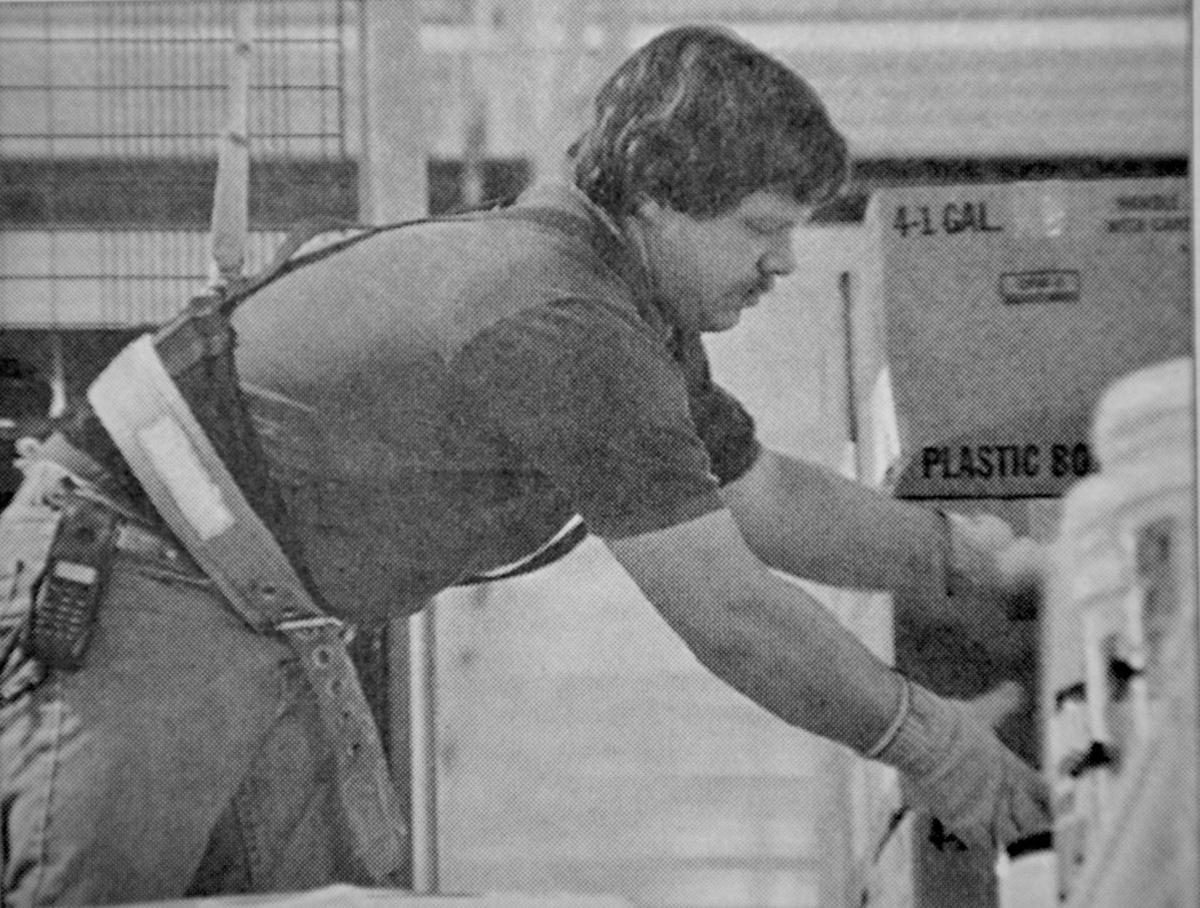 Barry Winebarger stocks shelves at the Lowes Home Improvement Warehouse in Boone before it officially opens in February 2002.

Betsy Hawkins practices with the Appalachian Dance Ensemble for an upcoming concert in February 1982.

Hardin Park first-graders Jessica Langham, Grant Hudson, Bradley Parker and LaShod Horton cheer on their classmates during a game of kickball in February 2002.

A 1942 advertisement shows several products that could be bought from Hollar’s Grocery in Boone.

Jane Nicholson, the operations manager for the WATA radio station in Boone, is named Young Career Woman by the Boone Business and Professional Women’s Club in February 1982.

Barry Winebarger stocks shelves at the Lowes Home Improvement Warehouse in Boone before it officially opens in February 2002.

A Feb. 19, 1942, article in the Watauga Democrat documented that 850 Watauga County citizens — between the ages of 20 and 45 — had registered for the third U.S. draft “for possible military service against the Axis.”

“Registrations were conducted at the office of the selective service board in Boone and at a large number of points throughout the county. Local selective service officials had predicted a registration of from 1,000 to 4,000. However, the figure reached may be expected to be raised considerably when cards from local residents working elsewhere are returned to the local board.

“In the state, it is believed that final returns will indicate a registration of near a quarter of a million, or about half the number enrolled in the two previous registrations. The national registration is about 9 (million),” according to the article.

“The $6 million project, which will feature a golf course designed by golfing great Jack Nicklaus, is being built on a 2,500-acre tract by Elk River Development Corporation,” according to the article.

The article quoted the corporation’s president, Harry Robbins, as stating that the project had a finished bridge across the Elk River and was about to start work on a tunnel under the airport runway. The tunnel was planned to be 150 feet long and 28 feet wide with a 4,600-foot landing strip that would “accommodate private jets.”

Construction of the golf course was scheduled to start the following May. The club area was designed to have a large clubhouse, a tennis club with both indoor and outdoor courts, a swimming pool and an equestrian center and a 25-acre lake. The project was planned to include 500 residential units with plans calling for about 350 single-family homes and some 150 multi-family units.

“It’s a 10-year building program for the residences, while the other will be about 24-36 months,” the article quoted Robbins as saying. “It should be about 18 months for the golf course. One of the first things that will probably be done is have a home built for Jack Nicklaus.”

Robbins also stated in the article that the homes could run up to a total of $100 million for the 10-year period. He added that he thought the development would add a “new dimension to the area,” the article stated.

“Nationally the number of farms in the U.S. went down for the second straight year,” stated a Feb. 27, 2002, article in the Watauga Democrat titled, “Number of Watuaga County farms continues to dwindle.”

The article reported that Sue Counts, the Watauga County extension director for the N.C. Cooperative Extension Service, estimated that Watauga County had 1,500 farms in 2002 — which was a decrease of 120 to 130 farms during 2001.

“The (U.S. Department of Agriculture) defined a farm or a ranch as any establishment from which at least $1,000 of agricultural products are sold during the year. An article by the Associated Press attributes the decline to bad weather, competition for land and lower commodity prices.

“In the latest available compilation of figures the USDA reported that North Carolina had 58,000 farms in 1998. This is a loss of more than 1,000 farms from figures reported in 1997. The report for the same time period listed 9.4 million acres in farm production for both years. With the loss of 1,000 farms but no decline in acreage in agricultural use, it is an indication of a combination of acreage into larger farms.

“Watauga County has everything from a single greenhouse to a 4,500-acre farm,” stated David Tucker of the N.C. Cooperative Extension Service in the article. “We have a few of the old-timers, who have been doing it for 30 or 40 years, who still have a half of an acre of tobacco and they say they are farmers.”

The article also reported that Christmas trees occupied 3,500 acres of Watauga County, several thousand acres of land were used for hay production and upwards of 10,000 acres were used as pasture for beef cattle.

“Counts said that in a study and report presented to the N.C. legislature it was discovered that the number of farms in the mountains of North Carolina had actually gone up over the last 20 years while the amount of acreage per farm had done down. Tucker said that this report would seem to indicate that, unlike the rest of the state, the mountains have seen growth in smaller farms and decrease in larger farms,” according to the article.