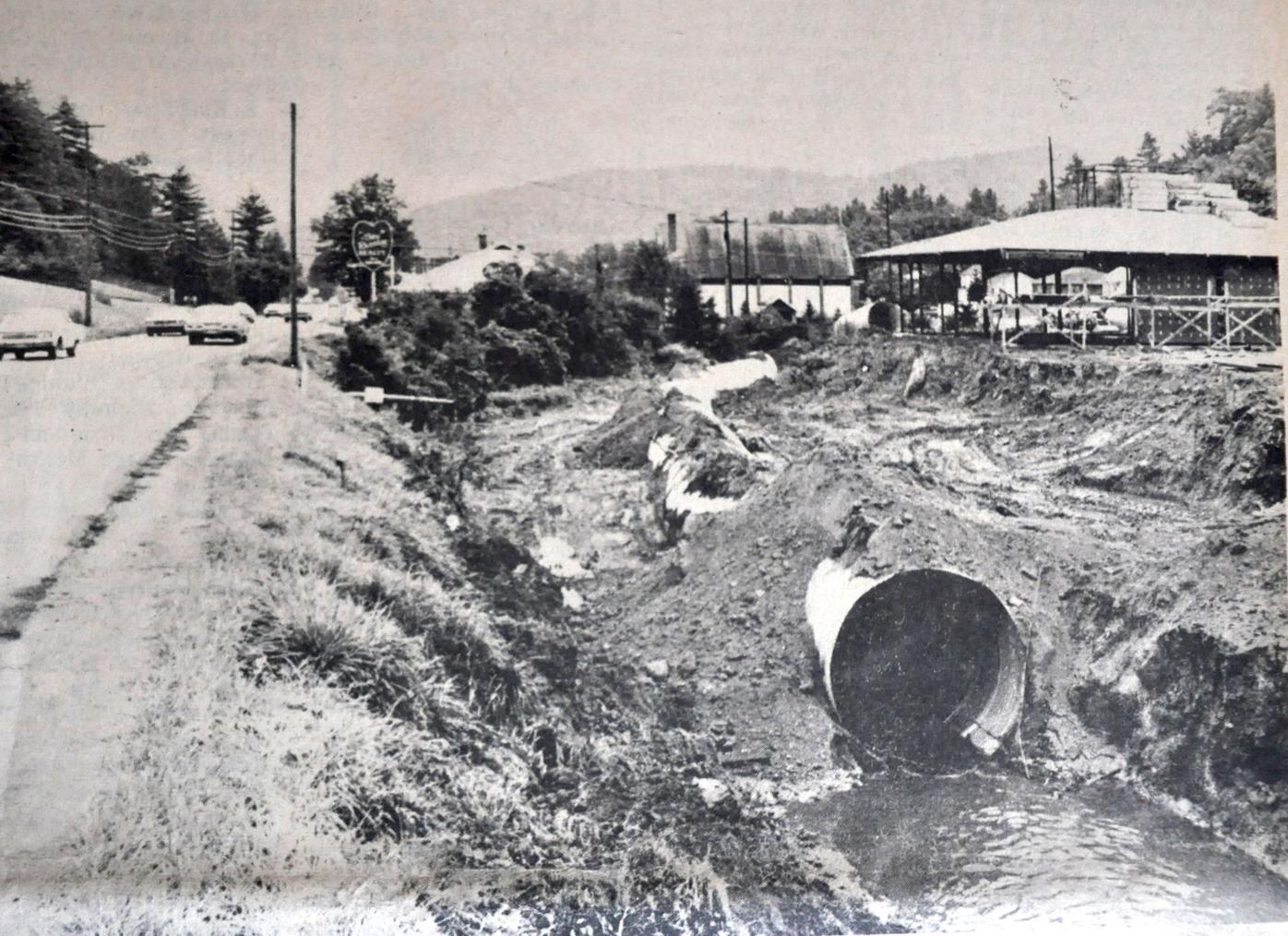 In this photo published in the Sept. 23, 1971, issue of Watauga Democrat, culvert construction was under way at the location of two new Boone business buildings — including the partially completed Honey’s Restaurant at right — near the intersection of Faculty Drive with Blowing Rock Road. The culvert was to put Boone Creek underground for about a block. 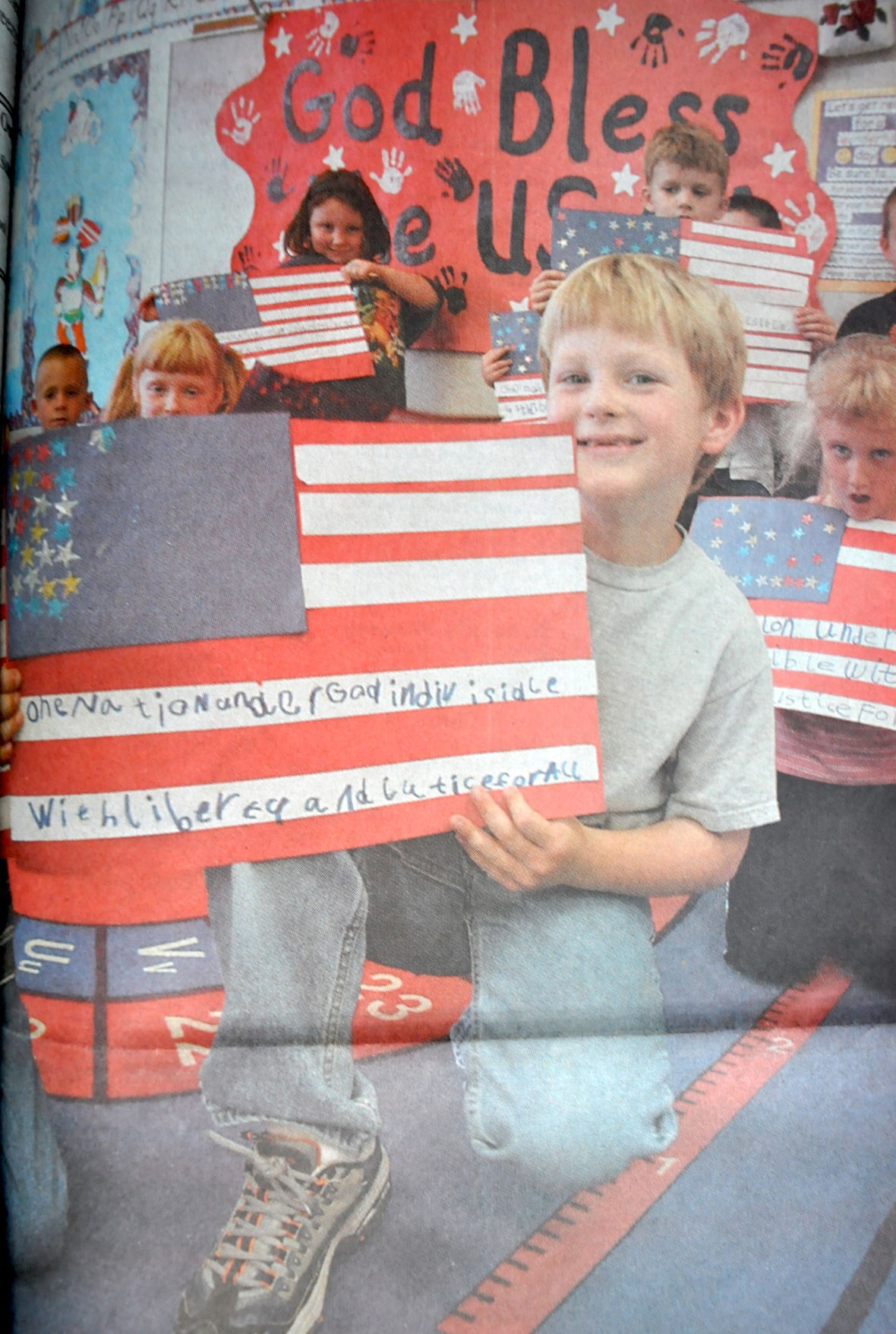 In this photo published in the Watauga Democrat on Sept. 21, 2001, Jordan Pope, 6, and other first-graders in Crystal Taylor’s first-grade class at Bethel Elementary School proudly display flags they made in response to the 9/11 terrorist attacks in New York City and at the Pentagon. 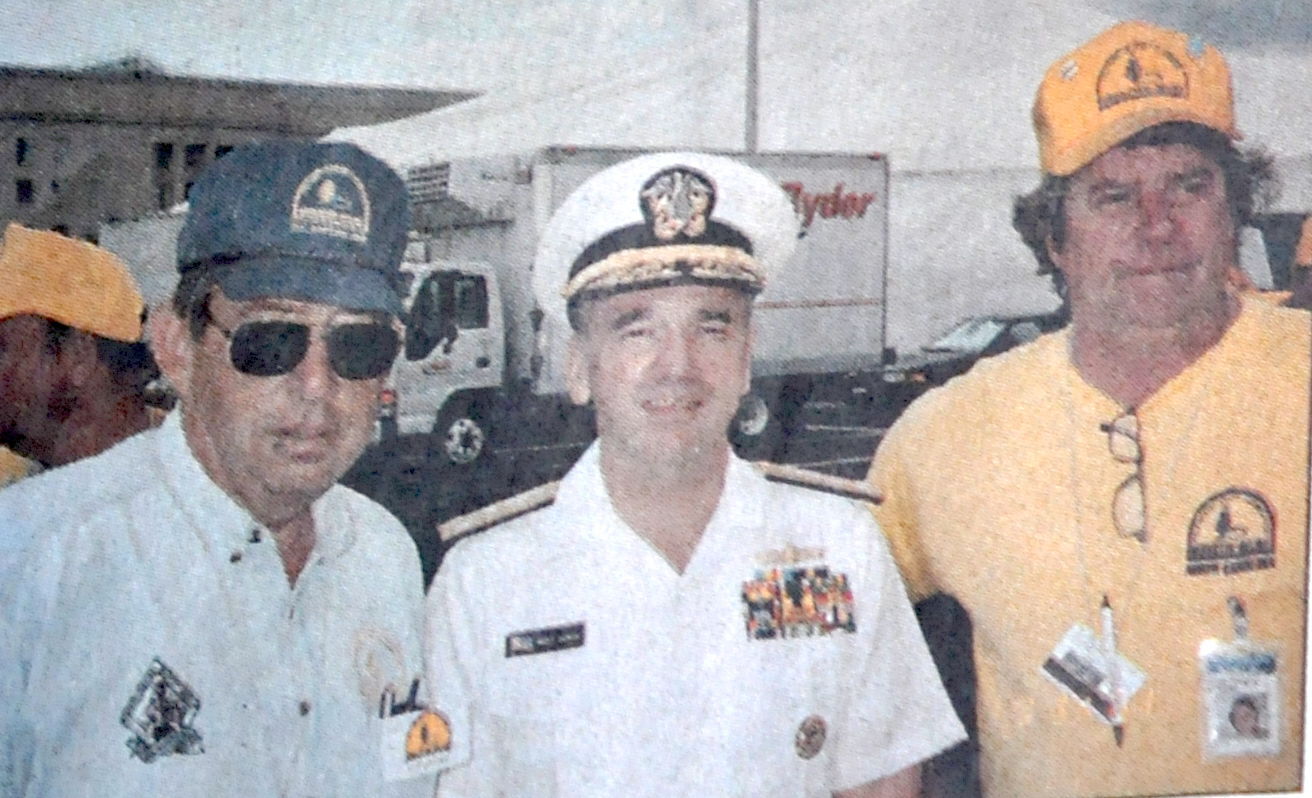 Skip Greene, left, led volunteers in serving meals to firefighters and rescuers at the Pentagon in the days after 9/11. He is pictured in this photo published in the Sept. 21, 2001, Watauga Democrat with Admiral Walt Doran and Robert Stroupe. 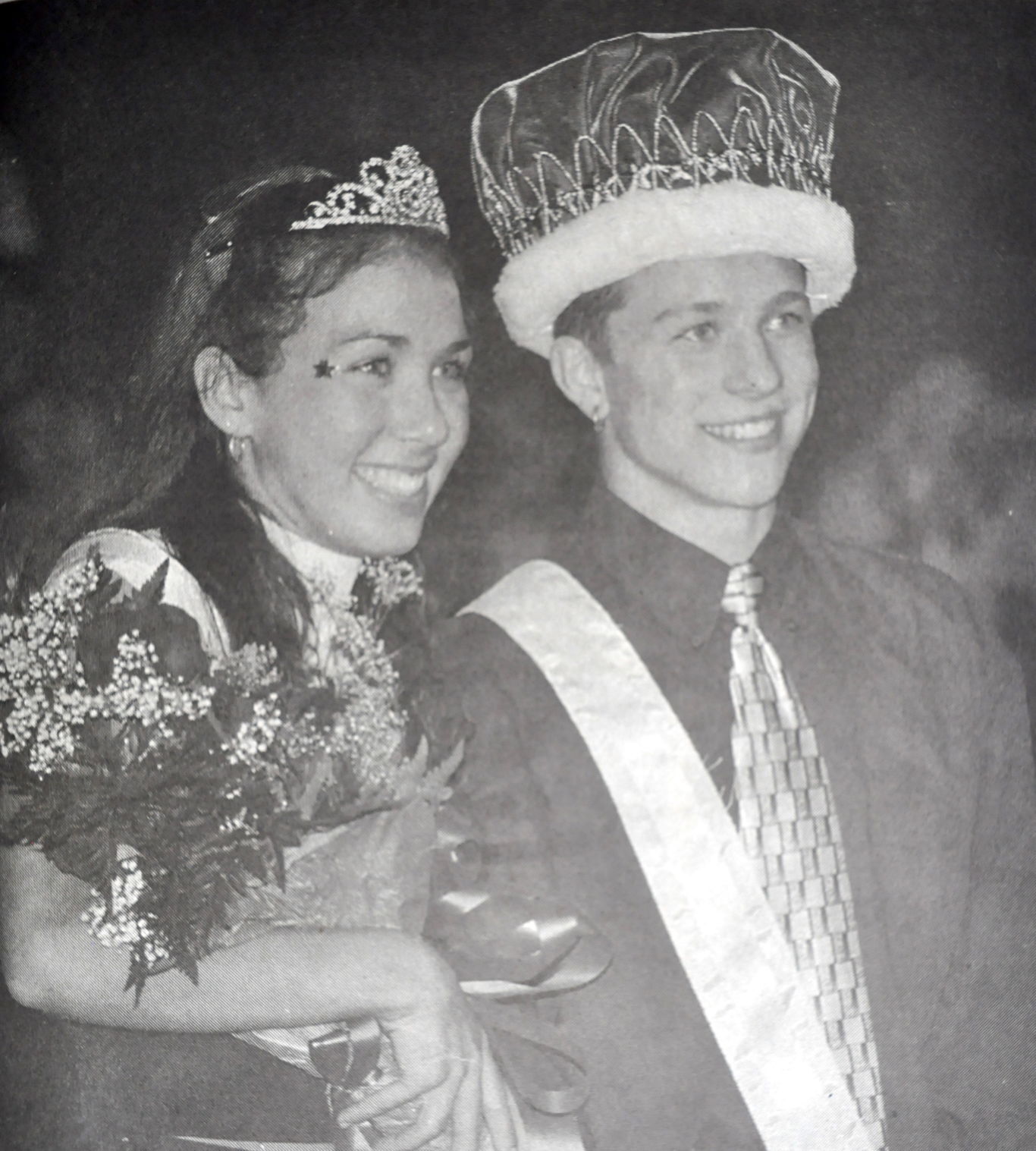 Blair Bolick and Sheldon Coffey are crowned the 2001 Homecoming Queen and King at Watauga High School. 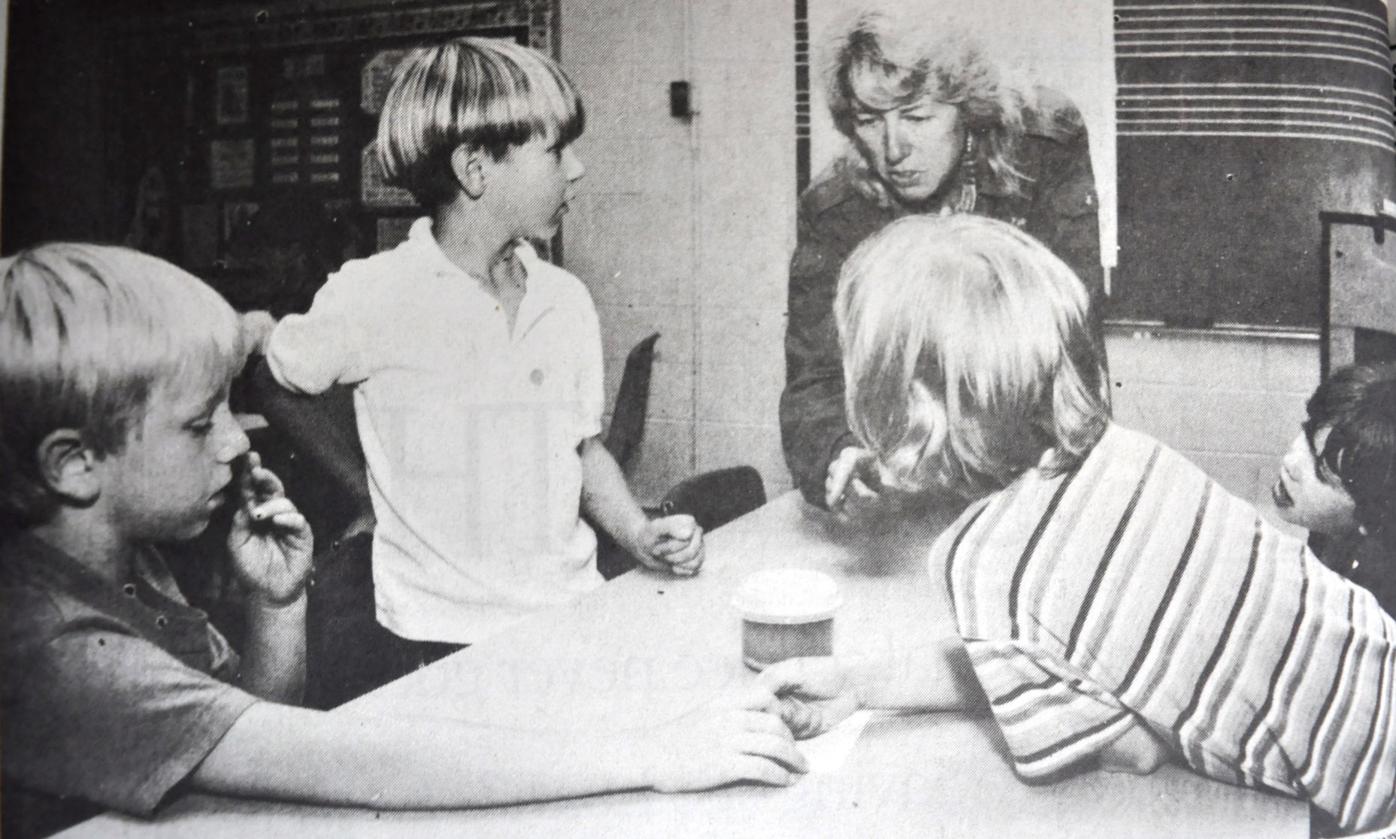 In this photo published in the Sept. 25, 1991, issue of Watauga Democrat, (from left) Dylan Tatum, 7, Kevin Vasgaard, 6, Jordan Minges, 6, and Lidia Ryan, 6, watch intently as Diane Vaszily explains the layers of the sea at Valle Crucis Elementary School. 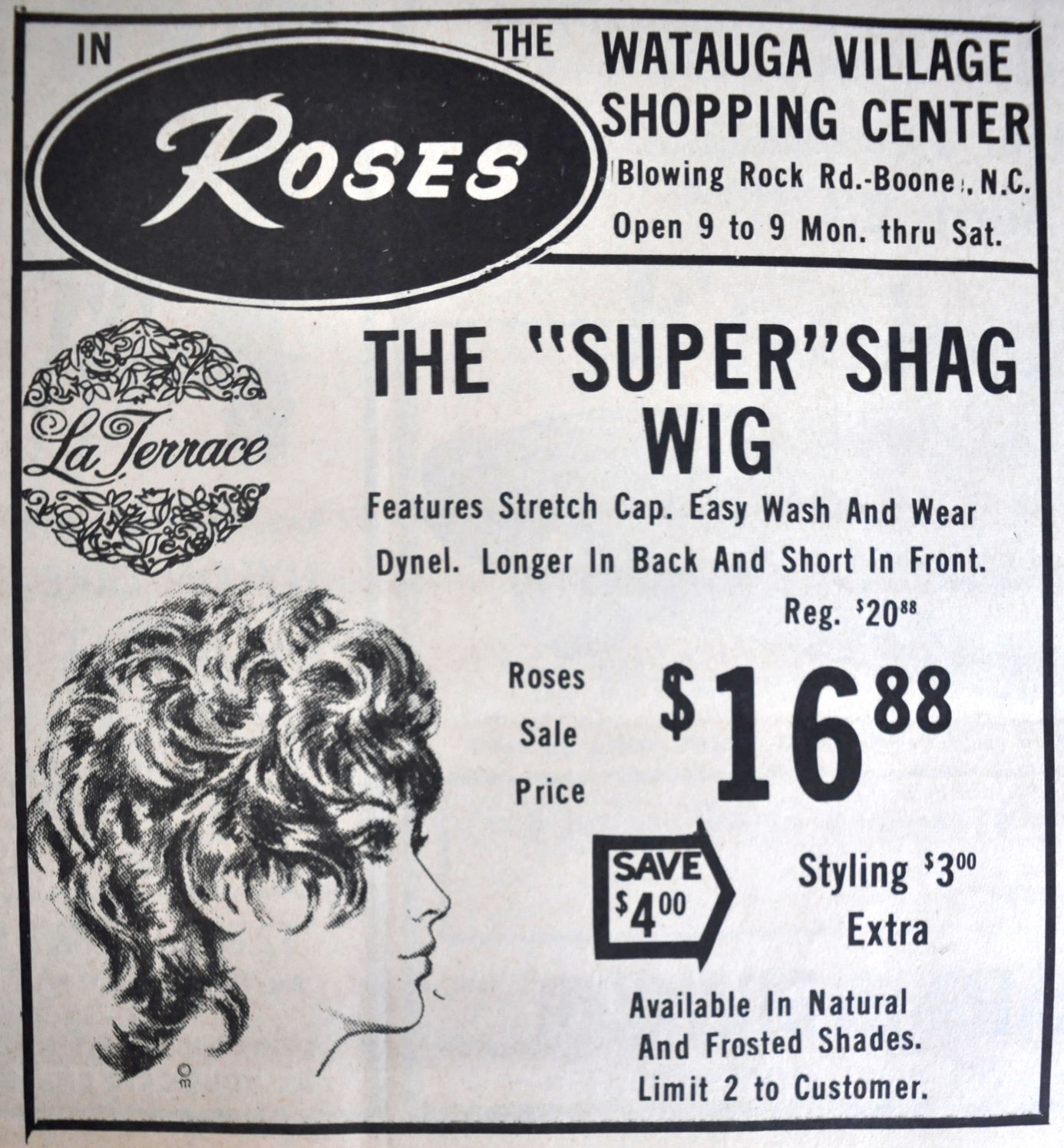 In this photo published in the Sept. 23, 1971, issue of Watauga Democrat, culvert construction was under way at the location of two new Boone business buildings — including the partially completed Honey’s Restaurant at right — near the intersection of Faculty Drive with Blowing Rock Road. The culvert was to put Boone Creek underground for about a block.

Blair Bolick and Sheldon Coffey are crowned the 2001 Homecoming Queen and King at Watauga High School.

“More Meat Used In County” read a headline in the Sept. 23, 1971, Watauga Democrat, with a report on eating patterns from the U.S. Department of Agriculture.

“Government figures indicate a changing pattern of eating in Watauga County, with meat and potatoes ringing the bell the loudest and some other foods dropping in popularity.

“It appears that people living in the local regional area are consuming meat at the annual rate of 167 pounds per person, or nearly 23 pounds more than in 1960,” the newspaper reported.

“And, because meat and potatoes go together, potato consumption has also gone up — from 107 pounds in 1960 to about 116 pounds at the present time.”

“The increased use of meat, a comparatively expensive item in the diet, is an indication that people are living better than they did a decade ago, according to the economists.”

“Besides Beech Mountain, an all-seasons resort at Banner Elk, Carolina Caribbean is also the developer of Land Harbors of America, a resort for campers at Linville, North Carolina, and The Reef, a resort complex of 101 condominiums at St. Croix, U.S. Virgin Islands,” the article stated.

The Watauga Democrat reported on plans to convert the old Junaluska School — a 30-year-old building — into a community center and offices for the Watauga Youth Network.

“This was the symbol of segregation,’ said Boone Mayor Velma Burnley as she stood in the glow of a bare lightbulb inside a scarred structure that was once Boone’s school for black children. ‘Now it is a symbol of serving the community,’ she said.”

“Saturday’s ceremony marked the end of a two-year search which began when the WYN Board of Directors decided that the steady rise in demand for services combined with a lack of youth facilities in the area called for expansion from the WYN’s two-room, storefront offices on Howard Street.”

The Sept. 21, 2001, issue of Watauga Democrat included a report of an interview with Boone’s Skip Greene, who led a team of 27 volunteers from the Southern Baptist Conference Baptist Men to cook hot meals for firefighters and rescuers at the Pentagon, which had been attacked by terrorists 10 days before in the 9/11 attacks.

Greene, a state coordinator for disaster relief for the Southern Baptist Conference, was contacted by the SBC’s North American Mission Board at 10 a.m. on Sept. 11, 2001 — less than two hours after the first plane hit the North Tower of the World Trade Center in New York City.

Greene began gathering his team, and “at 3:30 in the afternoon on Sept. 12 we served 2,300 meals of chicken and dumplings, green beans, pears, cookies, tea and lemonade,” Greene told the newspaper.

The newspaper also informed readers of the 10th annual Olde Boone Streetfest, which was to be held on Howard Street in downtown Boone.