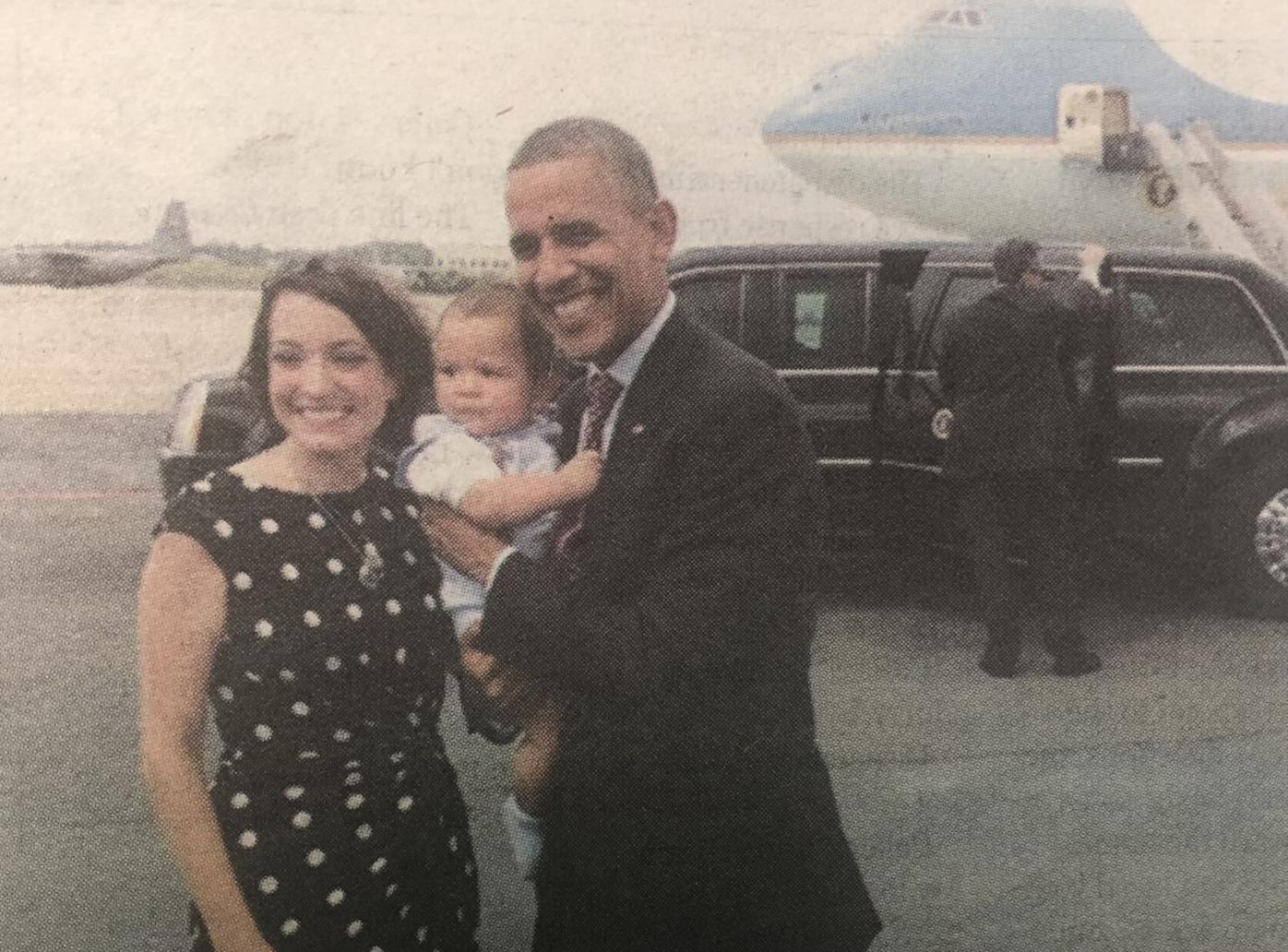 Jenny Elerbe and her son Rob with President Barack Obama as seen in a Sept. 19, 2012, edition of the Watauga Democrat. 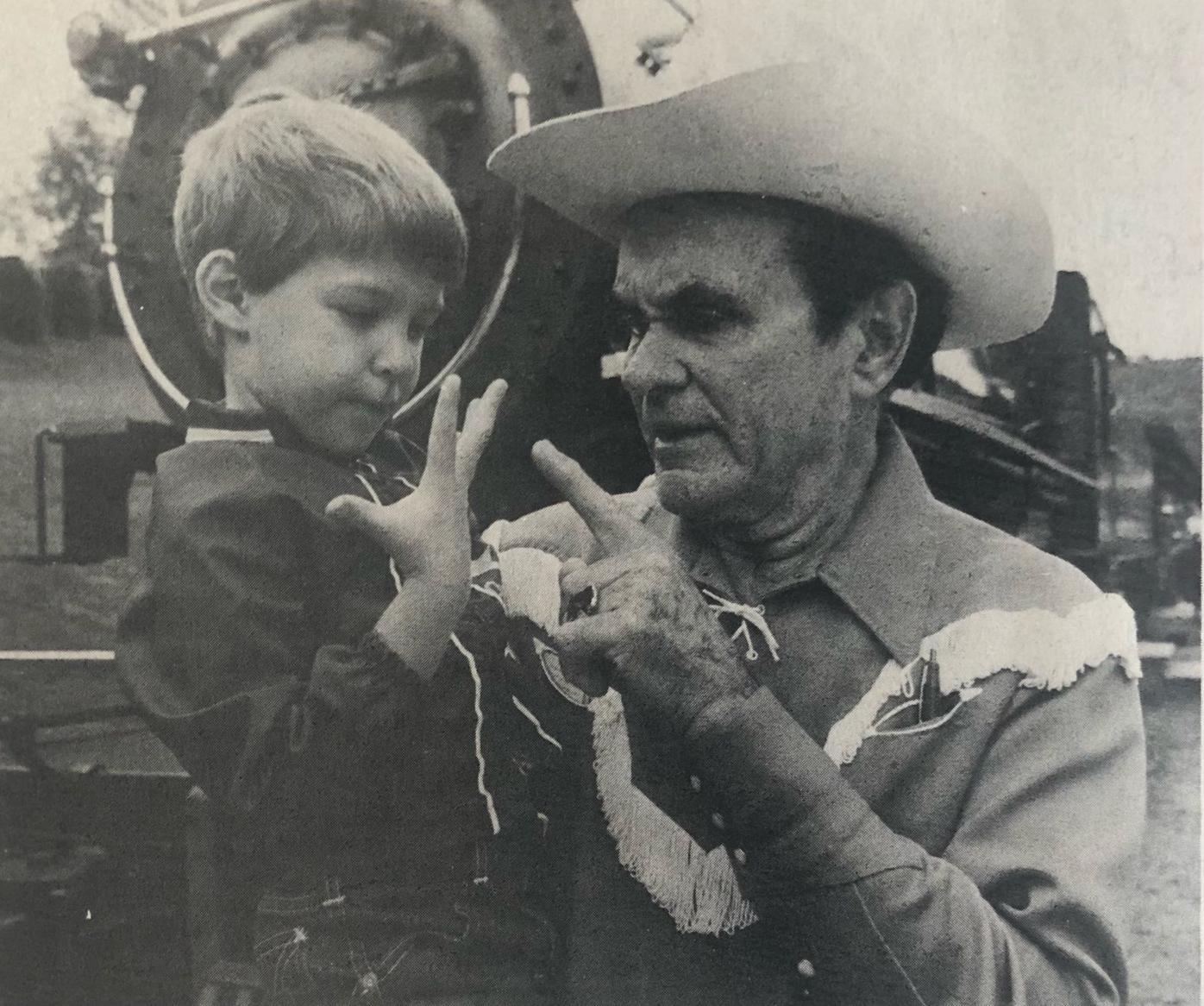 Singing cowboy Fred Kirby with Ben Arbaugh at Tweetsie Railroad as seen in a Sept. 16, 1982, edition of the Watauga Democrat. 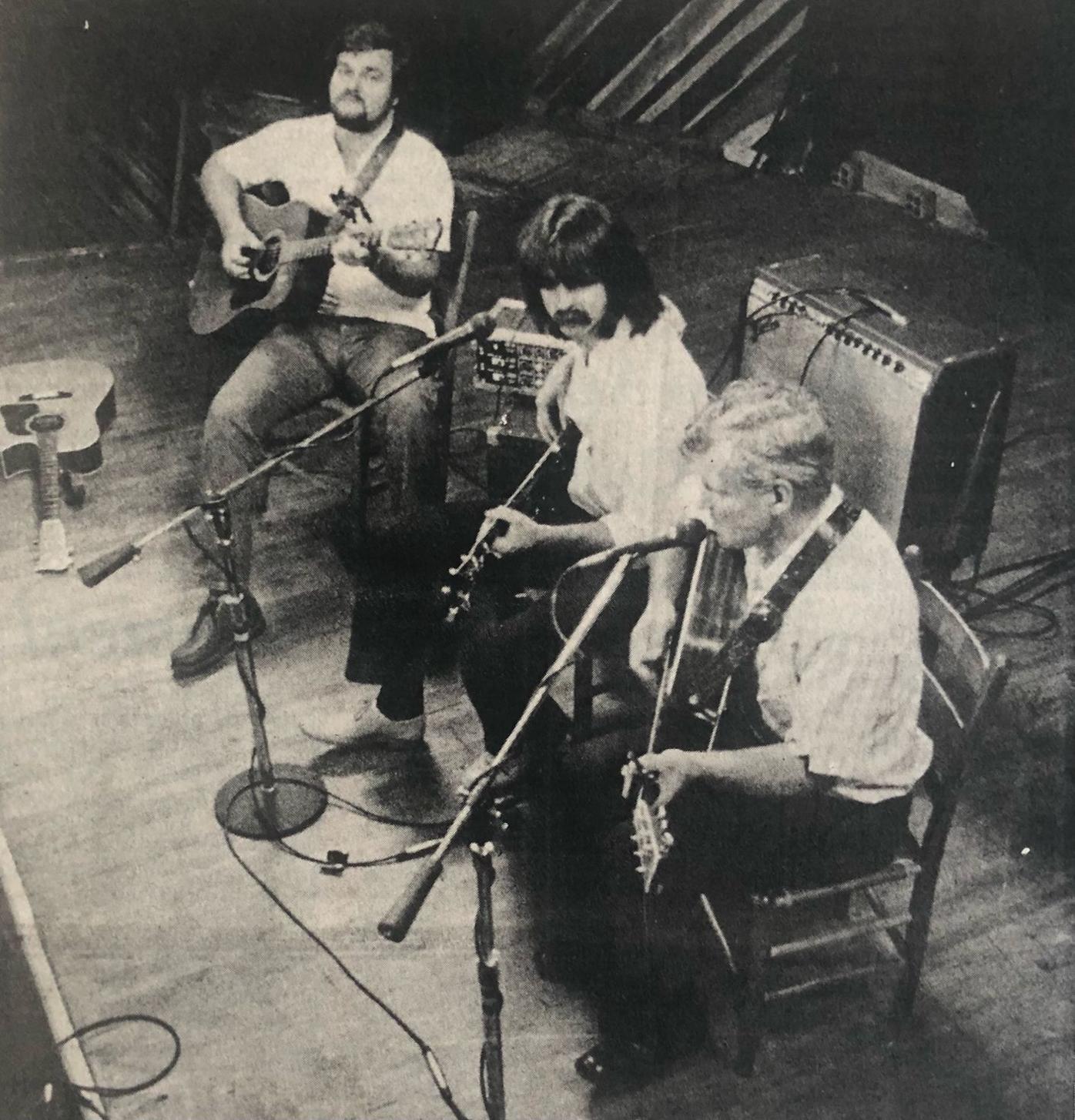 Merle Watson, T. Michael Coleman and Doc Watson testing their instruments during a fiery sound check at P. B. Scott’s Music Hall in Blowing Rock as seen in a Sept. 16, 1982, edition of the Watauga Democrat. 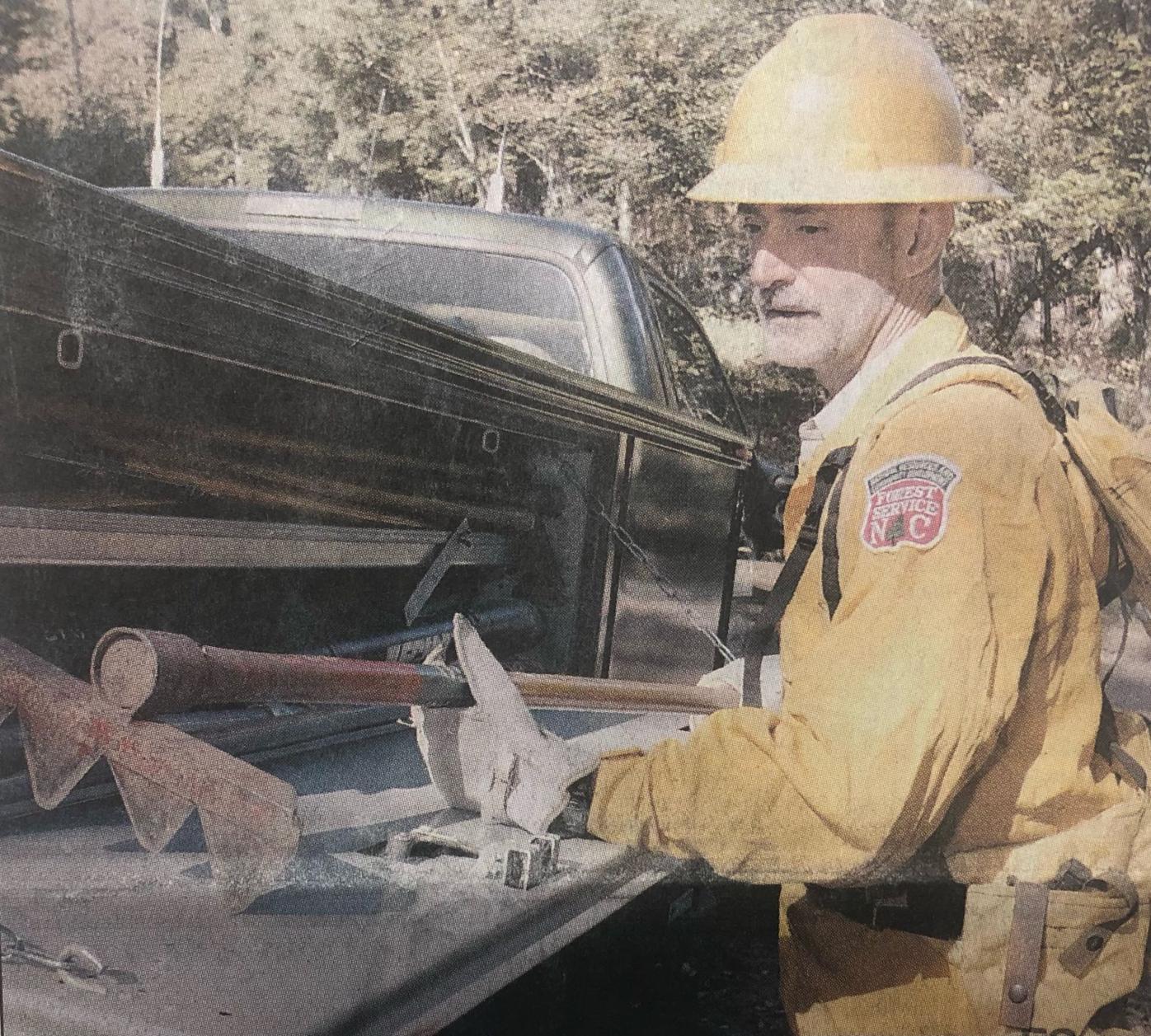 Rudy Johnson selects a fire rake from his well-equipped truck as seen in a Sept. 16, 2002, edition of the Watauga Democrat. 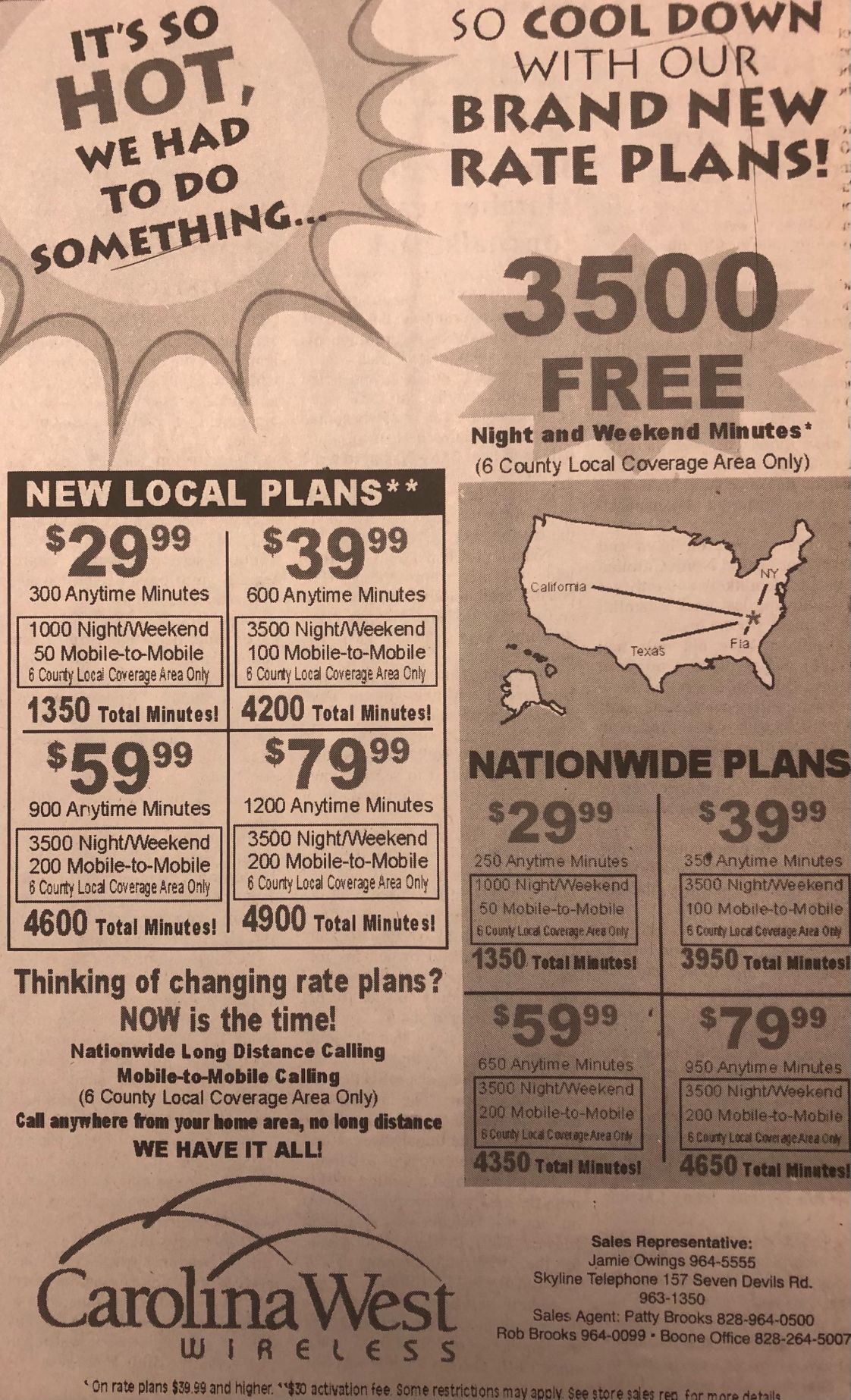 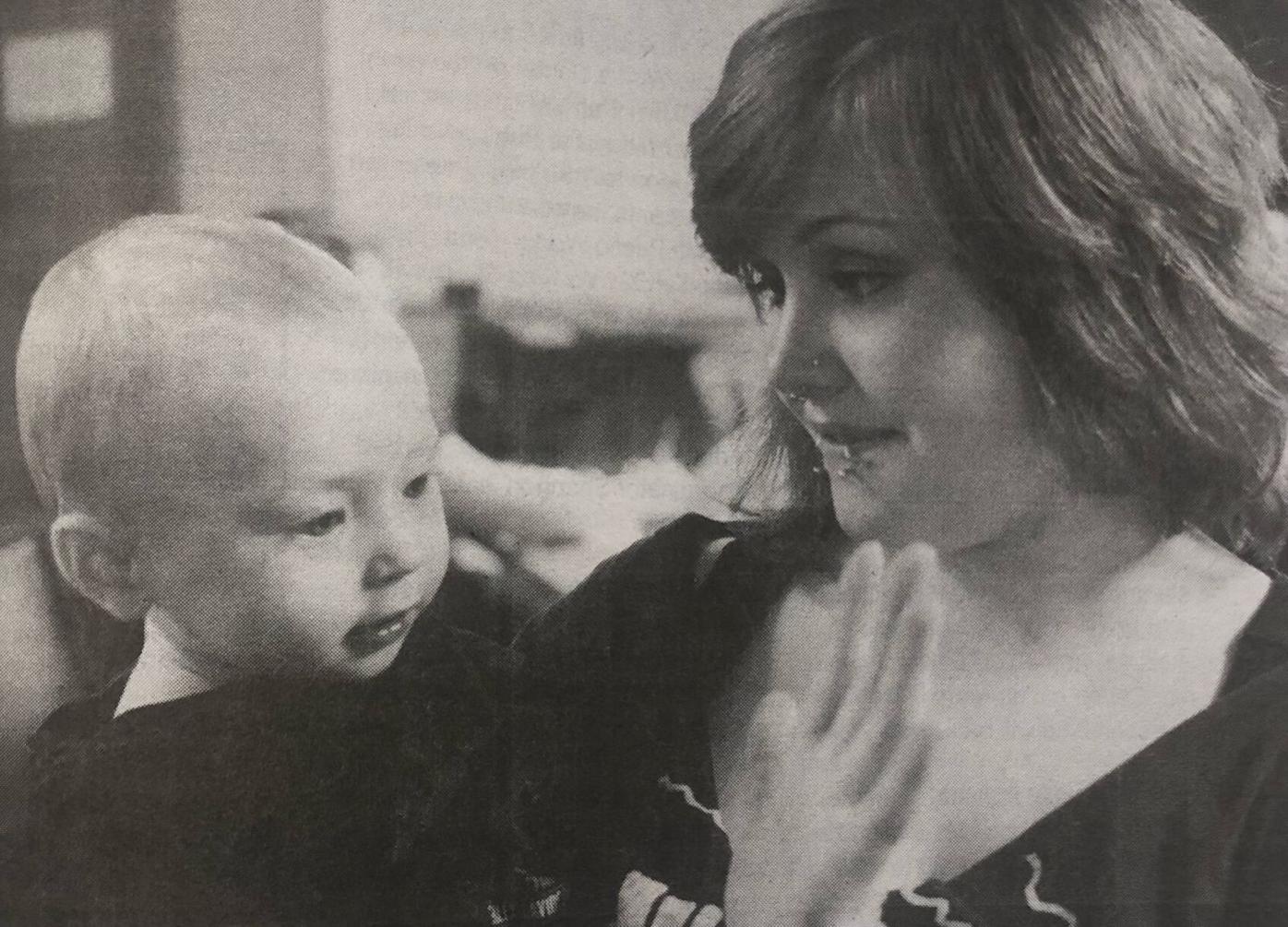 Jenny Elerbe and her son Rob with President Barack Obama as seen in a Sept. 19, 2012, edition of the Watauga Democrat.

Singing cowboy Fred Kirby with Ben Arbaugh at Tweetsie Railroad as seen in a Sept. 16, 1982, edition of the Watauga Democrat.

Merle Watson, T. Michael Coleman and Doc Watson testing their instruments during a fiery sound check at P. B. Scott’s Music Hall in Blowing Rock as seen in a Sept. 16, 1982, edition of the Watauga Democrat.

Rudy Johnson selects a fire rake from his well-equipped truck as seen in a Sept. 16, 2002, edition of the Watauga Democrat.

“Area law enforcement officers were pursuing escapees from the Watauga County Jail Wednesday after being tipped off the suspects had been seen in the Boone area,” an article in a Sept. 16, 1982, edition of the Watauga Democrat stated.

“Four of five persons were still at large Wednesday after having escaped from the Watauga County Jail about 1:20 that morning,” the article stated. “The five left the jailer tied up with a bedsheet at the facility.”

According to the article, the escapees came up to a resident of the Top of Boone development and asked to use the phone because they said their car had broken down.

“Rogers said he thought that one of the men had identified himself as Jimmy Wheeler over the phone to someone he had called in Lenoir,” the article stated. “Wheeler is one of the suspects being sought by the authorities.”

“Watauga County sheriff’s deputies were searching the Rainbow Trail area around 1 p.m. Wednesday,” the article stated. “They believed that the four escapees may have split up.”

According to the article, one individual had voluntarily returned to the sheriff’s department.

“Sheriff Ward Carroll was reportedly out of town and not available for comment, and no details were available as to how the five made their escape,” the article stated. “Yesterday’s escape follows yet another by a suspect who did not return to the jail after apparently being released several days ago.”

According to the article, those who escaped from the Watauga County Law Enforcement Center Wednesday were Jimmy Dean Wheeler, 35, of Boone, Caryn Monaque Rutherford, 17, of Texas, Sherman V. Hammett, 26 and an unidentified female subject and juvenile.

“The juvenile subject was being held in the 24-hour lock-up cell when she escaped,” the article stated. “She returned later on Wednesday and was released to her father.”

According to the article, Wheeler was an escaped convict from Brushy Mountain Prison in Tennessee and was awaiting trial on charges of auto larceny and possession of a stolen vehicle.

Rutherford was awaiting trial on charges of carrying a concealed weapon and possession of a controlled substance, according to the article.

“Johnson, 49, has been with the Forest Service for 28 years, having signed up in April 1974,” the article stated. “While attending Watauga High School, he realized that office life wouldn’t suit him and aspired to seek out a profession that would allow him to work outdoors.”

According to the article, after graduation in 1971, he attended Haywood Technical Institute in Clyde where he earned his degree in forestry and wildlife.

Since 1974, according to the article, Watauga is where Johnson has remained, enjoying his work, which ultimately saves lives.

“Although the laws haven’t changed drastically, the environment which they govern has,” the article stated. “Once dealing with the protecting of timber, the laws must now encompass the many homes and structures that dot Watauga County’s forests.”

According to the article, Johnson said the biggest cause of fire is when someone carelessly burns debris. One law at the time entailed that a person must have a burning permit if planning to burn debris or construct a large fire.

“To prevent the spread of fire, Johnson recommends digging a three-foot fire line around the debris to keep the blaze under control,” the article stated. “One should also stay with the fire as long as there are hot coals present. Coals and other material should be fully extinguished when through.”

According to the article, Johnson said 99 percent of fires at the time were caused by humans.

“Two months have passed since the MAFFS 7 C-130 Hercules deployed by the N.C. Air National Guard 145th Airlift Wing crashed while fighting fires in South Dakota, and tributes continue in honor of four airmen killed in the accident, including 35-year-old Boone resident Maj. Ryan Scott David,” according to an article in a Sept. 19, 2012, issue of the Watauga Democrat.

“On Sept. 5, President Barack Obama landed at the 145th Airlift Wing of the Air National Guard based in Charlotte for the Democratic National Convention,” the article stated. “After landing, Obama met with the families of the airmen, including David’s widow, Jenny Ellerbe, and their 8-month-old Rob — who seemed to favor the president’s tie.”

According to the article, Obama looked at a picture of “Ry” and asked each of the family members if they were getting the help they need, Ellerbe said.

“On Sunday, Ellerbe and Rob travelled to Bank of America Stadium in Charlotte for the first regular season home game of the Carolina Panthers’ season, where three C-130 aircraft flew over he stadium in tribute to the fallen airmen and others serving in the Air National Guard,” the article stated.

Ellerbe — who met David in the ROTC in Maryland according to the article — said she feels it is important to participate in tributes to the airmen.

“It’s important to me that the guys are all honored for what they do,” Ellerbe said in the article. “When Ry separated from active duty (in the Air Force) ... he wanted a special mission. His favorite types of things to do ... were the humanitarian missions. He was happy to be able to help people.”

Lt. Col. Brian Ratchford served as squadron commander for the 156th Airlift Wing in which David served. According to the article, David — a master navigator — volunteered to join the 145th Airlift Wing mission that departed June 30 from Charlotte to fight fires in Colorado before moving to South Dakota.

“He was real excited to go,” Ratchford said in the article. “He really loved to fly. When he got to Colorado Springs on that Saturday ... I caught up with him (by phone) and he said ‘This is exactly where I want to be, and this is exactly what I want to be doing.’”

Firefighting missions can be extremely risky, Ratchford said in the article, because planes must fly close to the ground and can be visually impaired by smoke.

“There’s always a series of things that has to go wrong for an airplane to crash,” Ratchford said in the article. “This does involve more risk than some other missions. We manage that the best we can. That means we send the best people we have. Only the best guys we have.”

According to the article, also killed in the crash were Lt. Col. Paul K. Mikeal, 42, of Mooresville; Maj. Joseph M. McCormick, 36, of Belmont; and Senior Master Sgt. Robert S. Cannon, 50, of Charlotte. Two other crew members were seriously injured.

“Ryan was a humble guy with a big smile who was always first to volunteer to help. He loved serving his country and was so proud to be a member of the very specialized MAFFS team,” Scotty Ellerbe, Jenny’s mother and David’s mother-in-law, said in the article. “He is so missed by all of us and is forever in our hearts.”