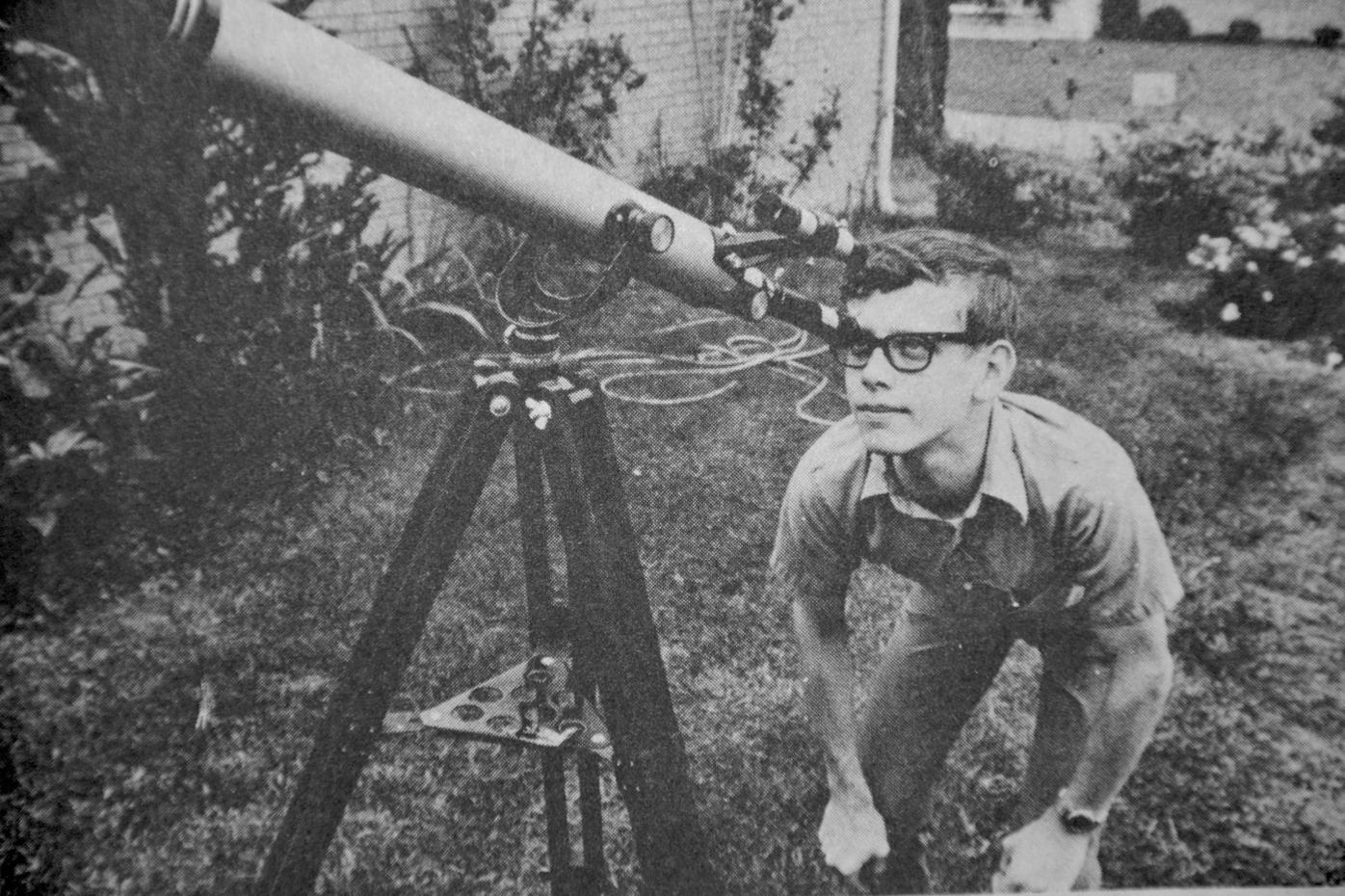 Daniel Green, of Boone, sets up his telescope in preparation of an eclipse, as pictured in a July 3, 1972, edition of the Watauga Democrat. 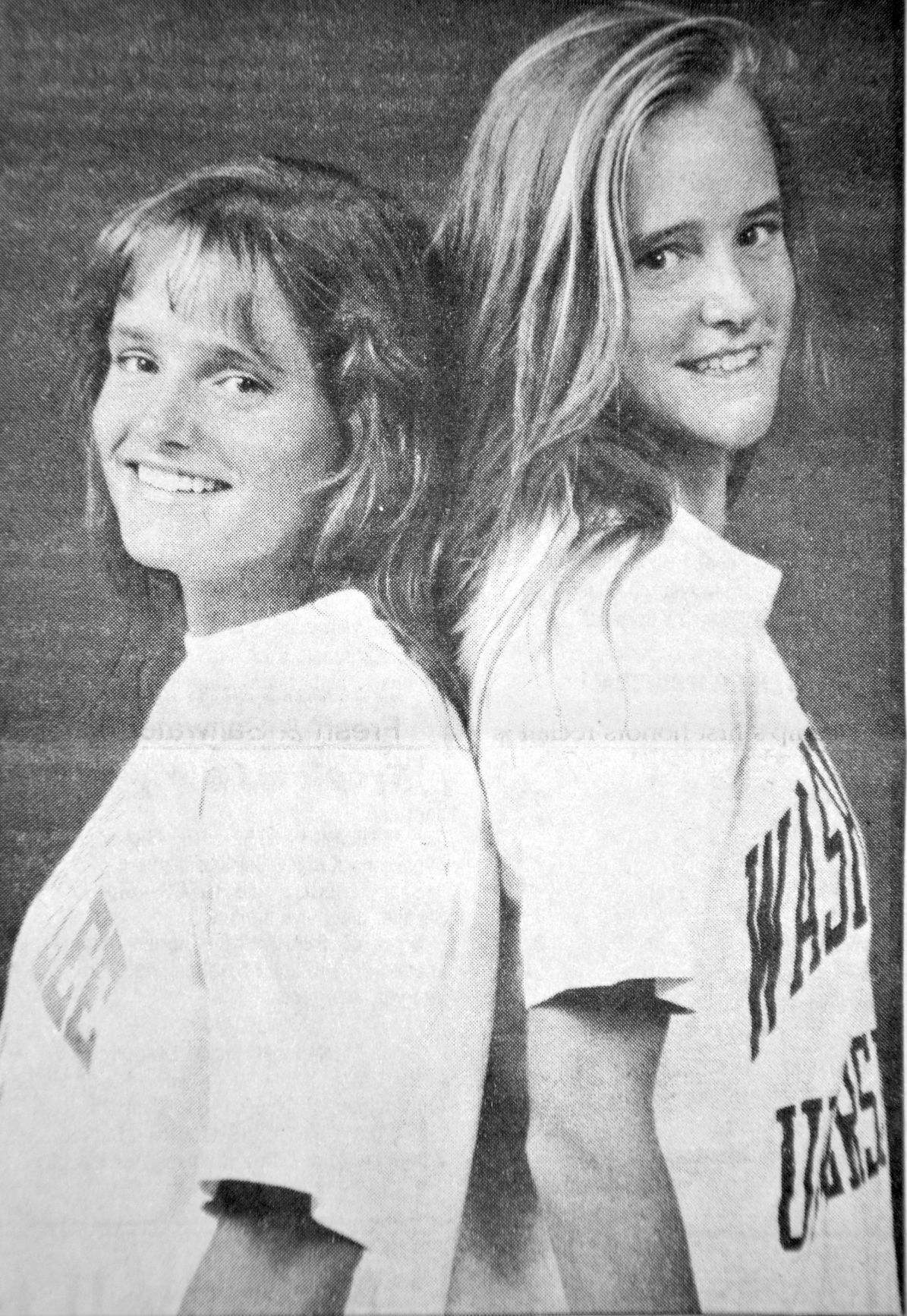 A 1952 advertisement showcases the grand opening of Kirk’s Barb-B-Q on Blowing Rock Road. 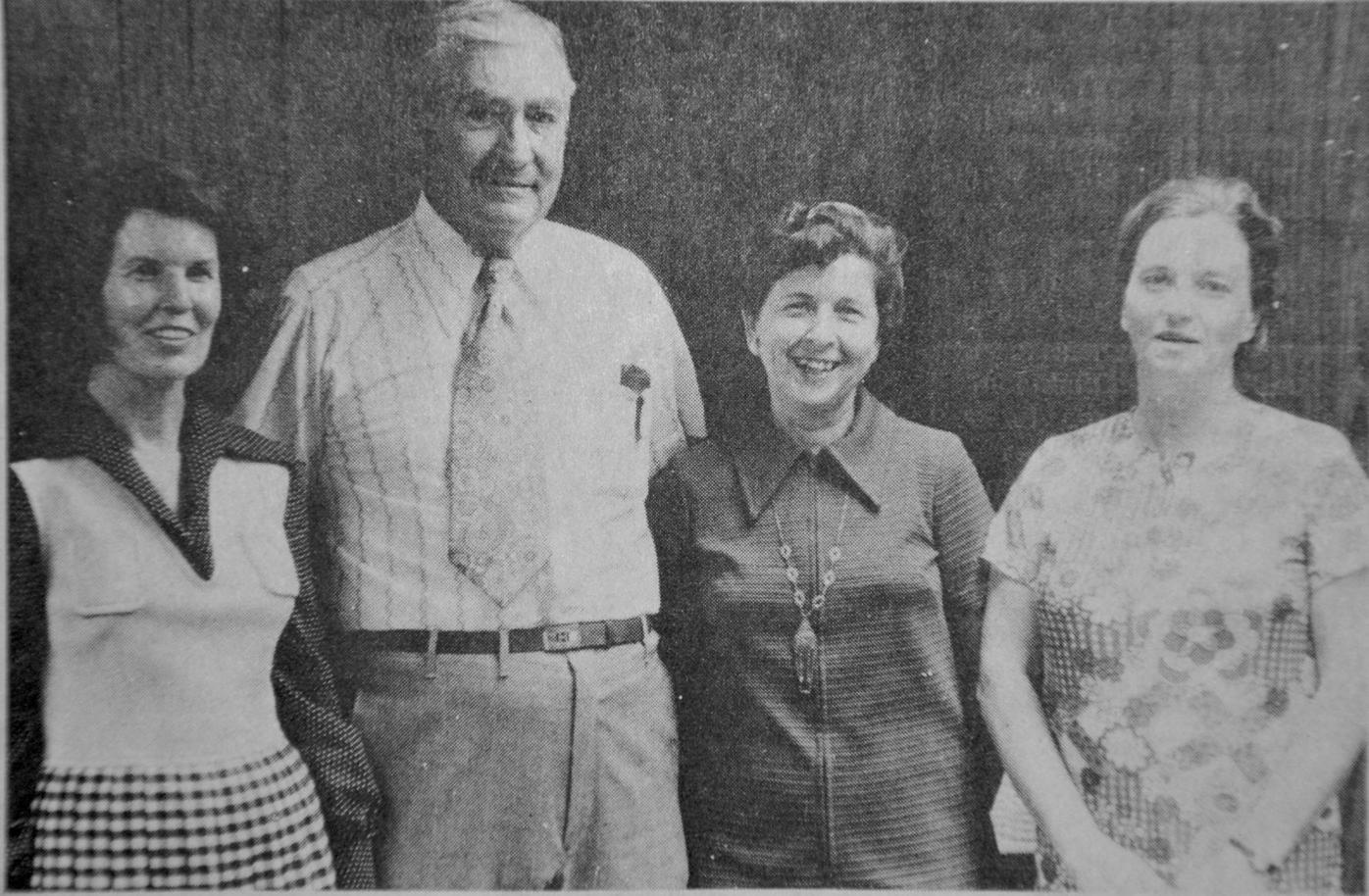 Officers of the Watauga County Humane Society were elected at the annual meeting of the society, as shown in a July 13, 1972, edition of the Watauga Democrat. Left to right: Velma Burnley, president; DeWitt Barnett, vice president; Nita Kautz, secretary; and Dee Richardson, treasurer. 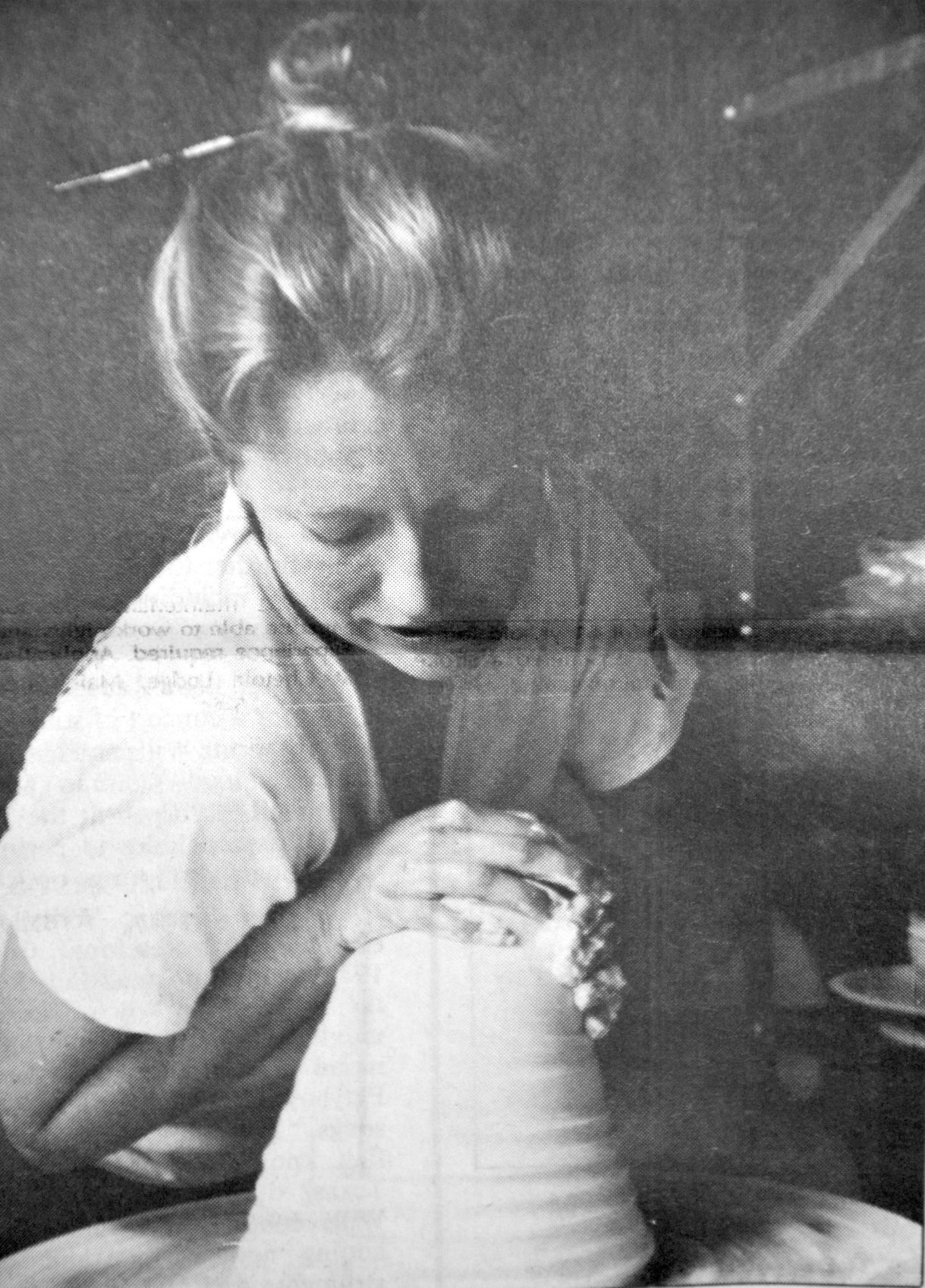 Kathryn Burrows throws clay on a potters wheel in a July 3, 1992, edition of the Watauga Democrat.

Daniel Green, of Boone, sets up his telescope in preparation of an eclipse, as pictured in a July 3, 1972, edition of the Watauga Democrat.

A 1952 advertisement showcases the grand opening of Kirk’s Barb-B-Q on Blowing Rock Road.

Officers of the Watauga County Humane Society were elected at the annual meeting of the society, as shown in a July 13, 1972, edition of the Watauga Democrat. Left to right: Velma Burnley, president; DeWitt Barnett, vice president; Nita Kautz, secretary; and Dee Richardson, treasurer.

Kathryn Burrows throws clay on a potters wheel in a July 3, 1992, edition of the Watauga Democrat.

“Kermit Hunter’s latest and greatest outdoor drama, ‘Horn in the West,’ was thrillingly premiered here last Friday night at the beautiful new Daniel Boone Amphitheater to the accompanying plaudits of press and public,” stated an article in the July 3, 1952, edition of the Watauga Democrat.

“The near-capacity audience of first-nighters from 20 states, variously estimated at 2,200 to 2,500, sat enthralled for two and half hours as a superb cast brought to pulsating life the author’s vibrant story of the fight for freedom by pioneers of the Southern Appalachian highlands during the turbulent decade from 1770 to 1780.

“In a single night, the new play took its place alongside such established successes in the field of outdoor dramas as ‘The Lost Colony,’ ‘The Common Glory,’ and ‘Unto These Hills,’” the article stated.

The July 3, 1972, edition of the Watauga Democrat showcased a special 100th birthday edition for the centennial anniversary of the town of Boone. An article on the front page of the newspaper explained that the celebration was started by the annual wagon train parade through King Street with 70 or so wagons pulled by horses, oxen and mules. Several businesses were going to be closed for the observation of the July 4 holiday and the town’s centennial celebration.

Several pages of the special 100th birthday edition were dedicated to Boone’s history. One article explained how the land where the town of Boone would now stand originally belonged to the Greene brothers — John and Jerry. Eventually, one of the Green brothers sold his land to Jordan Councill Jr., who built a large house and a store — which was later used as a post office. The other brother’s deed went to Ransom Hayes. This took place in 1820, according to the article.

Historian John Preston Arthur stated in the article that Councill’s store was the only merchant in the valley until 1849 – the same year that Watauga County was established, according to the article. The article names other families who eventually settled in the area and a few other buildings that developed. In 1850, Councill’s store post office became the Boone Post Office.

A different article in the centennial edition showcased the charter establishing the town of Boone as the county seat, to be effective Jan. 23, 1872. Boone, which had about 2,000 inhabitants at the time, was known as a village before being sanctioned as a town, and was rivaled by the communities of Valle Crucis, Beaver Dam and Shulls Mill, according to the centennial edition.

Subsequent pages of the 100th birthday edition shared historic photos of the town, and additional articles about the town’s history — with information such as the first trains coming through Boone in 1917 and a historic flood in 1940.

“Males and minorities are missing in the nation’s schools, education officials say, and Watauga County Schools are no different,” stated a July 10, 1992, edition of the Watauga Democrat.

“In a report recently released by the National Education Association, a survey showed that female teachers outweigh male teachers, with more than 70 percent of the nation’s teachers being female. In 1991, under a third of all teachers — 27.9 percent — were male, the lowest percentage since 1966, when the figure was 10 percent, according to an Associated Press report.

“The survey also revealed that minorities are underrepresented in the teaching force. In 1991, 86.8 percent of all teachers were white, 8 percent were Black, 3 percent Hispanic, 1.4 percent Asian and Pacific Islander and 0.9 percent American Indian and Alaska natives,” according to the article.

Watauga statistics — which included teachers, guidance counselors and librarians — showed that 78 percent, of 239 employees, were women. Men made up 22 percent of the employees, according to the article. At the time, Watauga fell “behind” in terms of racial composition, as they only employed one person of a minority, a Black person who was an elementary-school teacher.

“The application pool is very small in minority applications here,” Cecil Hagaman, the school system’s assistant superintendent at the time, was quoted as saying in the article.

“While Watauga County Schools have made efforts in terms of recruiting more males and minorities by attending regional job fairs and visiting other job fairs offered by colleges and universities, administrators have not established a policy relating to the hiring of minorities, (Hagaman) said,” according to the article.