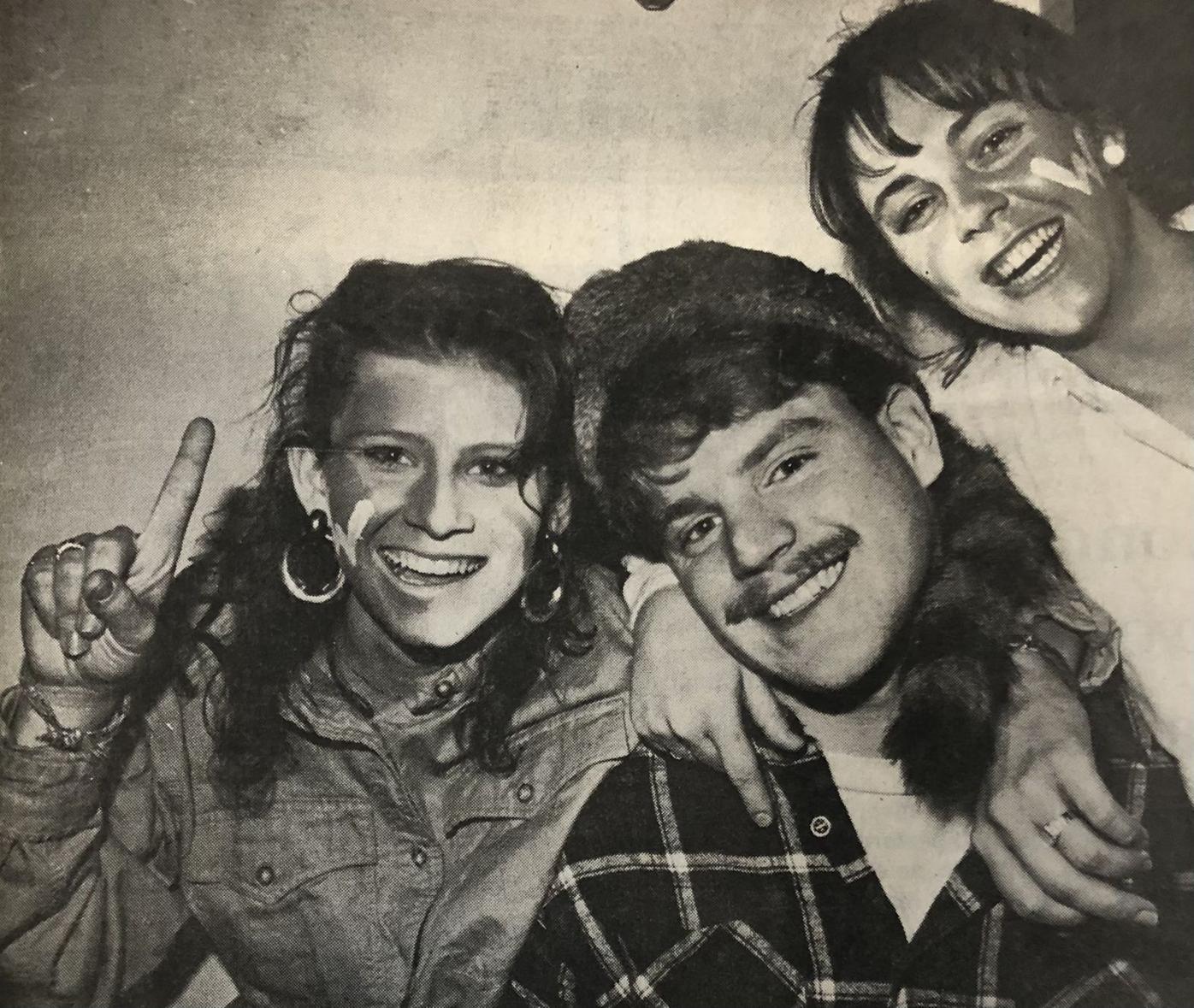 Leigh Ann Moody, Boyd Johnson and Sissy Salsbery show off their unusual makeup as a way to show school spirit before the last home game for the Watauga High School varsity basketball teams in a Feb. 24, 1988, edition of the Watauga Democrat. 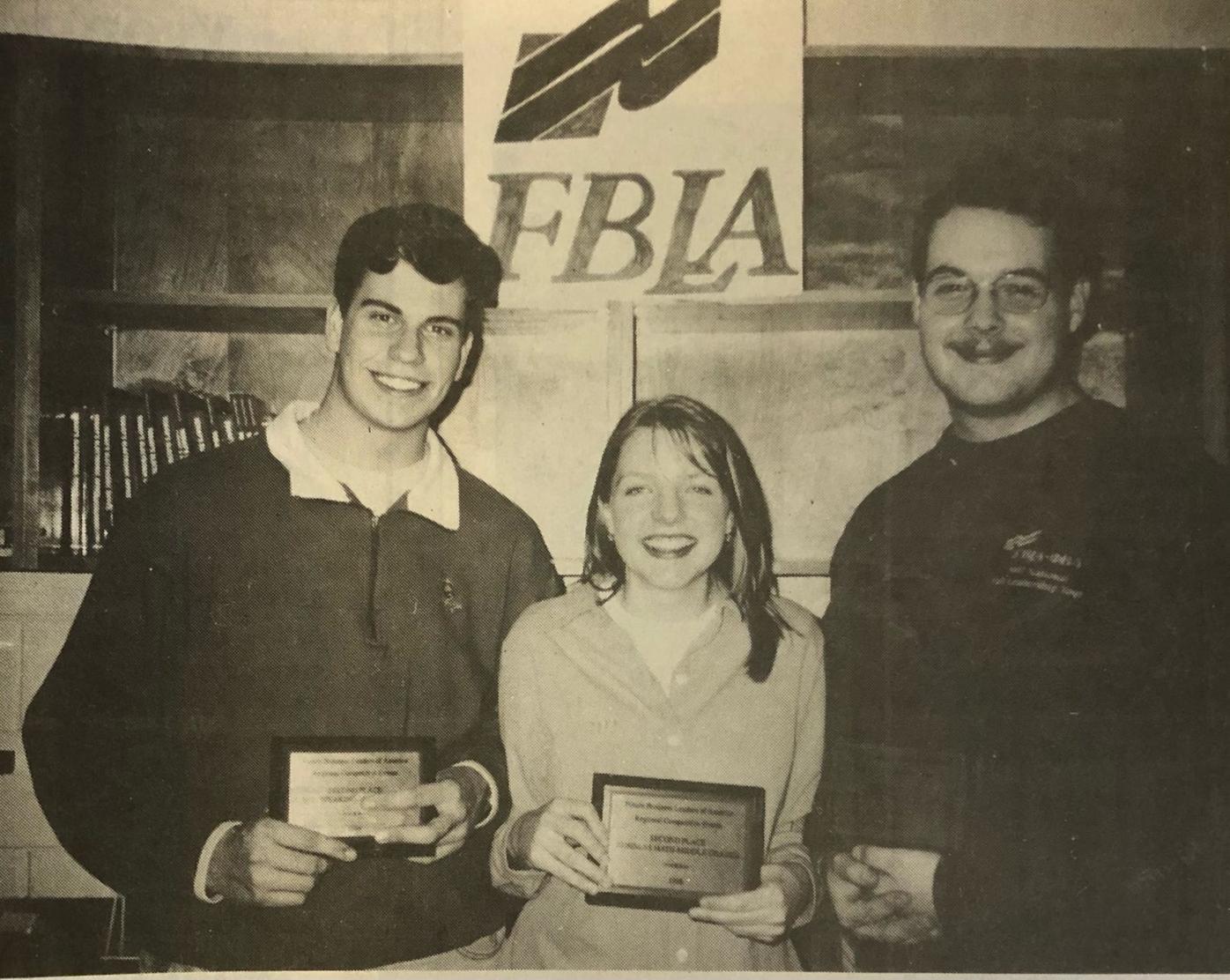 Three members of the Watauga Chapter of Future Business leaders of America place in their respective events at the Northwest Region Competitive Events. Pictured: Jonathan Proctor, Susan Peterson and Ralph Yarnall in a Feb. 25, 1998, edition of the Watauga Democrat. 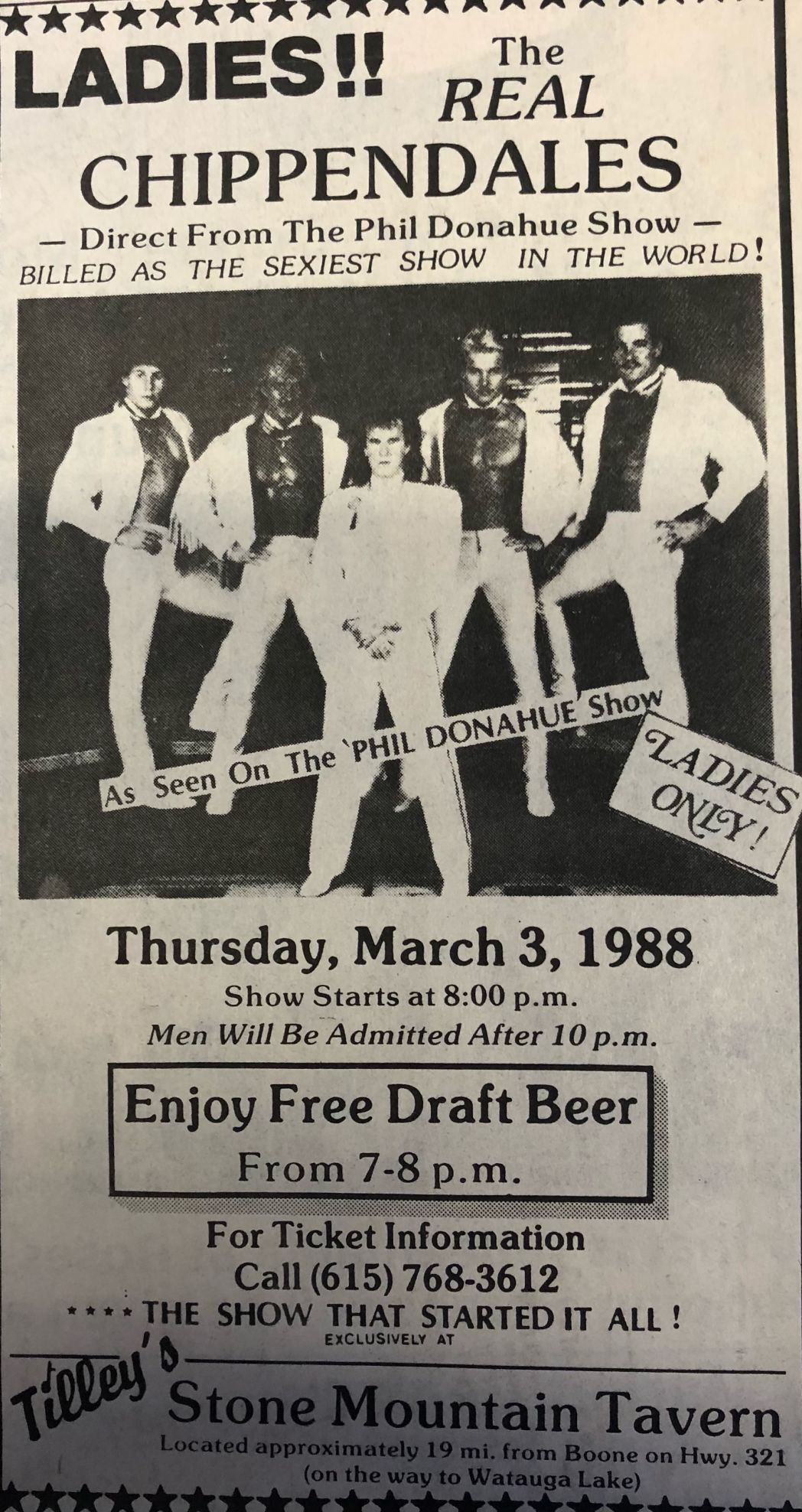 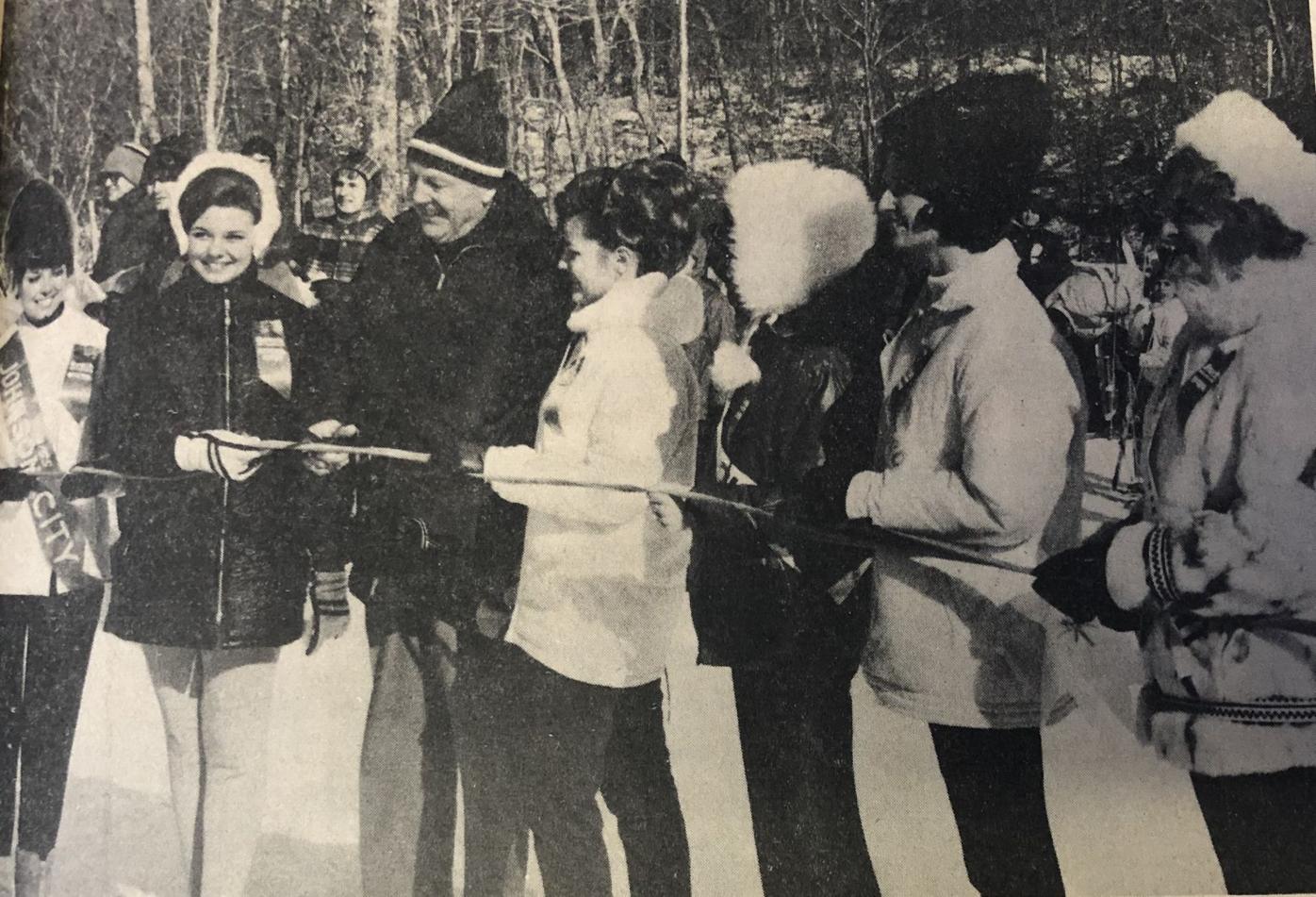 From left: Anne bailey, becky Lail, Vicki Von Cannon, Dana Scotten and Gov. Dan K. Moore are pictured in a Feb. 22, 1968, edition of the Watauga Democrat at a gala celebration. 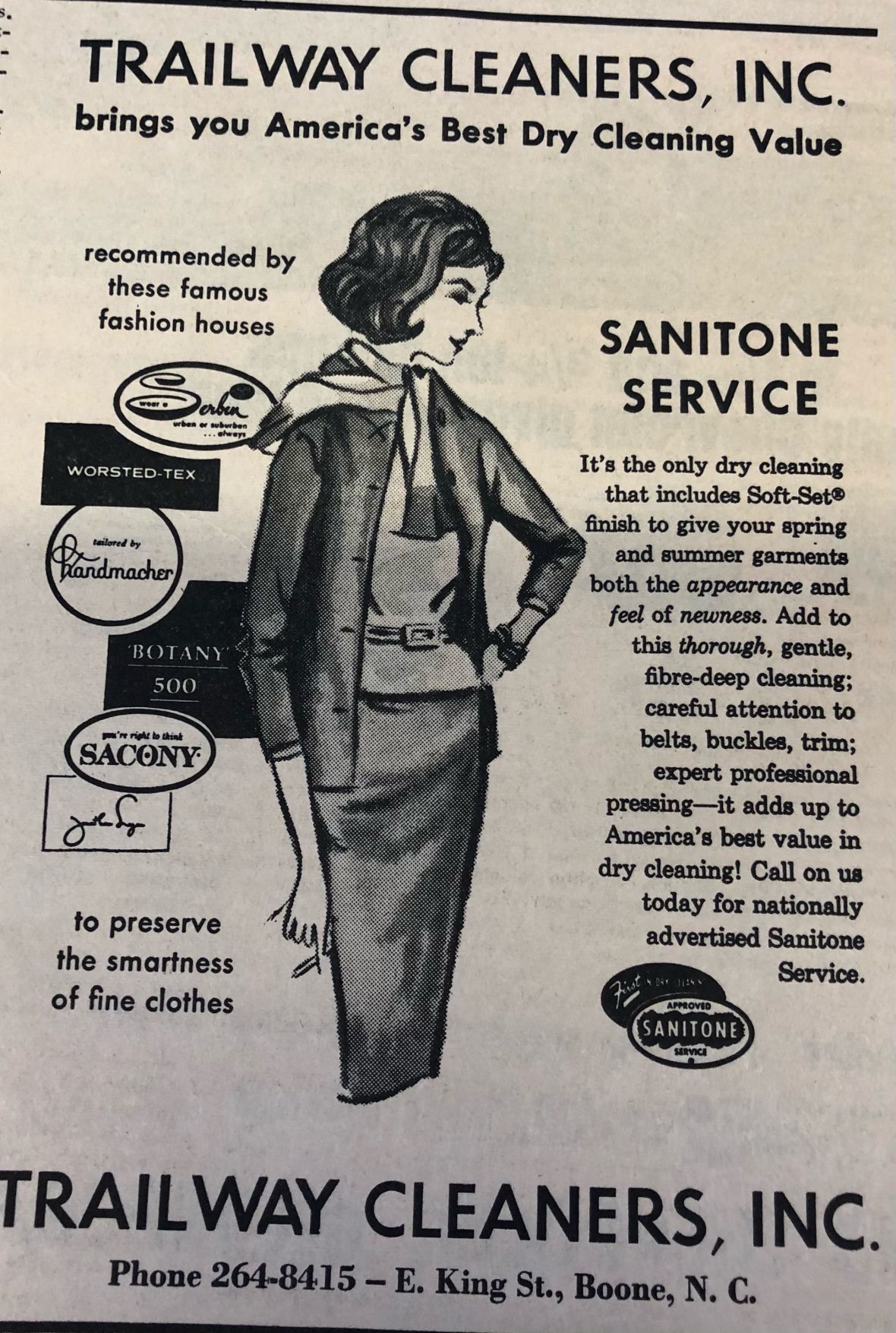 A Trailway Cleaners Inc ad is featured in a Feb. 22, 1968, edition of the Watauga Democrat.

Leigh Ann Moody, Boyd Johnson and Sissy Salsbery show off their unusual makeup as a way to show school spirit before the last home game for the Watauga High School varsity basketball teams in a Feb. 24, 1988, edition of the Watauga Democrat.

Three members of the Watauga Chapter of Future Business leaders of America place in their respective events at the Northwest Region Competitive Events. Pictured: Jonathan Proctor, Susan Peterson and Ralph Yarnall in a Feb. 25, 1998, edition of the Watauga Democrat.

From left: Anne bailey, becky Lail, Vicki Von Cannon, Dana Scotten and Gov. Dan K. Moore are pictured in a Feb. 22, 1968, edition of the Watauga Democrat at a gala celebration.

A Trailway Cleaners Inc ad is featured in a Feb. 22, 1968, edition of the Watauga Democrat.

“It was a full house when Hound Ears Lodge & Club opened its doors for Watauga’s first Heart Ball,” a Feb. 22, 1968, edition of the Watauga Democrat reported.

The Valentine’s Day event was sparked by the presence of Col. Mercer Lee Price and his guest, Miss Marie Mushro of Sioux City, Iowa, according to the article.

“At noon that day, the Ty Boyd broadcast featured Miss Mushro and Wade Wilmoth of Boone, who stood in for his wife, Sue,” the article read. “Mrs. Wilmoth, who underwent open heart surgery last year, had been hospitalized the week before. However, doctors’ predictions that she would be able to attend the ball that night came true.”

According to the article, Hound Ears presented music and entertainment free of charge for the evening and Spencer Robbins helped sell the last of the tickets toward a mink stole drawing.

“Fine Furriers of Savannah, Ga., procured the stole at cost for the heart ball,” the article read. “Nearly a hundred dollars worth of tickets were sold immediately before the drawing.”

Mrs. R. C. Rivers, Queen of Hearts for the evening and also an open-heart patient, drew the lucky ticket to win the mink stole.

Central Intelligence Agency recruiters visited Appalachian State University the week of Feb. 26, 1988 — drawing a few protestors and many applicants for the agency, according to an article in the Watauga Democrat from that week.

“When CIA recruiters John Hopkins and Larry Newhouse held a general information meeting on campus Wednesday evening, they were met with jeers from student protesters in the audience,” according to a Feb. 16, 1988, edition of the Watauga Democrat. “As the recruiters attempted to explain the application process and employment opportunities with the CIA, protestors shouted out questions concerning various atrocities the agency has allegedly committed in its covert operations.”

One of the student protesters, Erin Mason, is quoted in the article saying “We wanted to make the applicants aware of the CIA’s involvement in taking over governments of other countries, and going in and rearranging their cultures to fit their needs.”

“The CIA is beyond the laws, it’s out of control. There’s no control over what they’re doing, and we don’t feel they should use our facilities to promote activities,” Mason continued in the article. “There are other places where they can speak.”

Another protester, Will Cox, told the Watauga Democrat in 1988 that the CIA isn’t “IBM or DuPont, it’s a criminal organization.”

“The administration doesn’t let the mafia recruit on campus, and they should let the CIA,” Cox said.

According to the article, recruiters handled the protestors expertly, often ignoring them, or speaking in tag team fashion, so that when one recruiter would begin to get angry or flustered, he would sit down and let the other take over.

“There were a few people there that I thought were disruptive, but it wasn’t anything we weren’t prepared to handle,” Hopkins said in the 1988 article. “We were there to outline career opportunities and selection criteria for people to use in thinking about their future. We’re not here to discuss specific issues.”

Hopkins and Newhouse were recruiting students for foreign and domestic assignments, targeting those with interests and abilities in foreign languages, foreign affairs and world travel.

According to the article, no protestors were arrested and there were no major disturbances.

“With a big pot, a stove and a little bratwurst, it might have been a party,” read the beginning of a Feb. 25, 1998, article in the Watauga Democrat. “Instead, it was just your basic business Monday morning when the driver of a tractor trailer carrying about 40,000 pounds of cabbage lost control of his truck on U.S. 321 North heading Toward Elizabethtown, Tenn.”

According to the 1998 article, the truck apparently picked up speed going down a hill and took a curve too fast, going off the road to the left into an embankment.

“Owned by Ledford Trucking Company of Tennessee, the vehicle itself suffered about $60,000 of damage while the total loss of the cabbages amounted to approximately $12,000,” the article stated. “The accident happened at about 5:15 a.m. and no charges were filed against the driver who was wearing his seat belt at the time of the accident and suffered only slight injuries.”

Although an emergency vehicle came to the scene, the article stated the driver refused treatment, according to the article.

“Troopers and other clean-up crews were at the scene of the accident until about 5:30 p.m. Monday trying to clear the area,” according to the article. “Six dump truck loads of spilled cabbage were gathered and taken to the Watauga County Landfill where (Trooper J.C.) Boroughs said he believed the produce was to be taken elsewhere to be disposed of.”

According to the article, Boroughs said the cabbages could have maybe been saved if the trailer carrying them had not completely ruptured due to the accident.