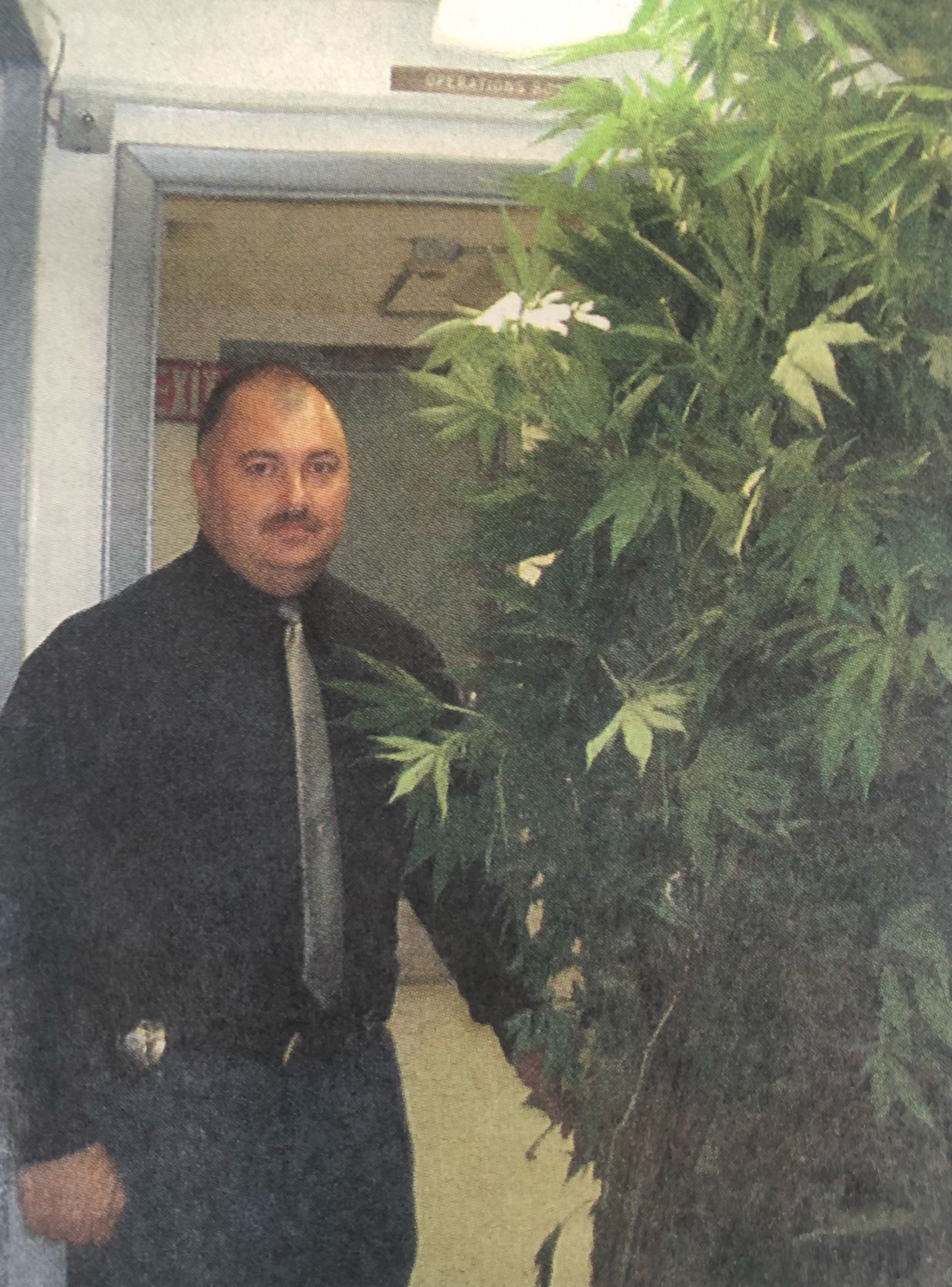 Watauga County Sheriff Mark Shook displays 119 marijuana plants seized in a raid as seen in an Aug. 11, 2003, edition of the Watauga Democrat. 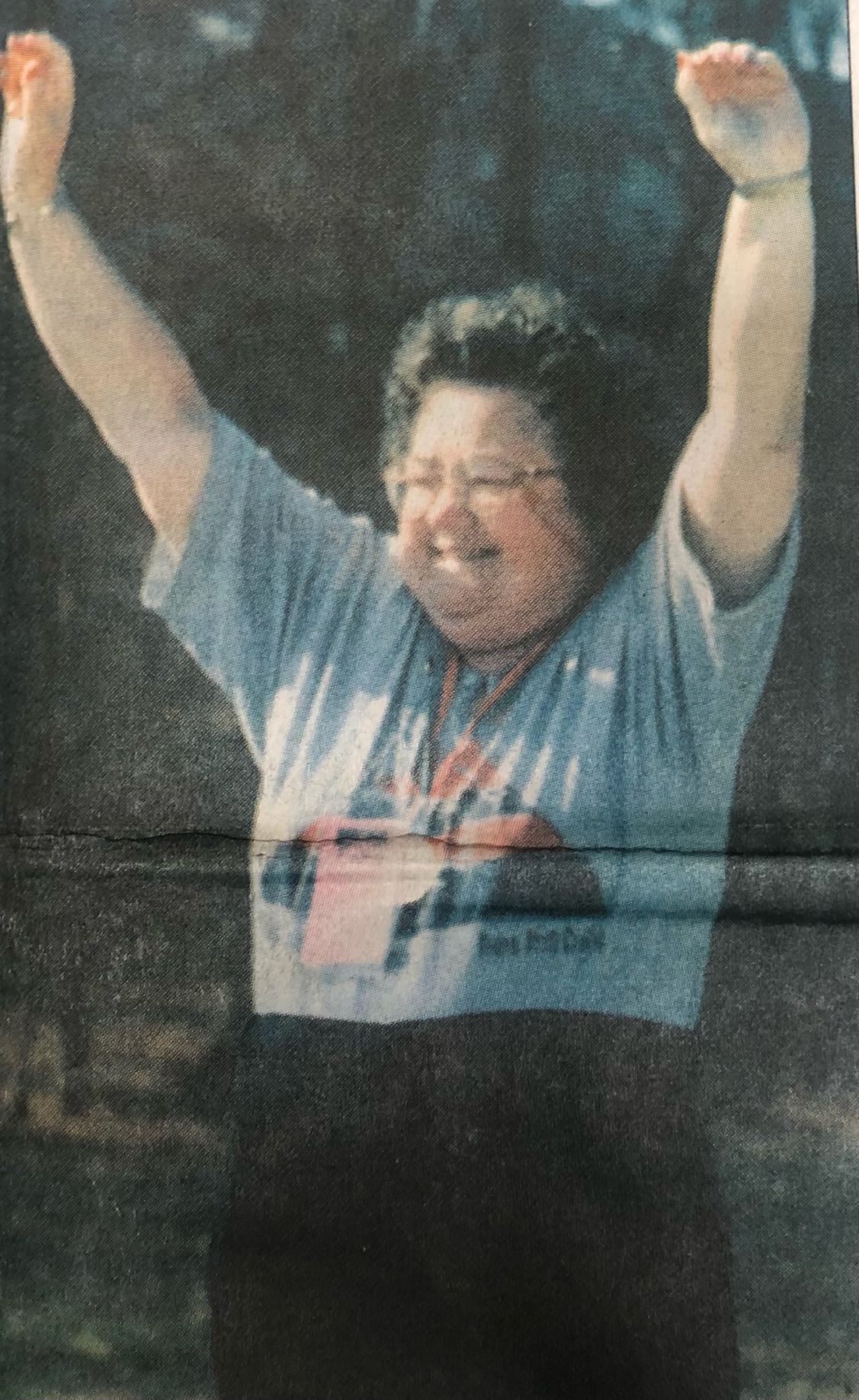 Evelyn Noblett of Boone, as seen in an Aug. 8, 2003, edition of the Watauga Democrat, was awarded Athlete of the Year by Special Olympics of North Carolina. 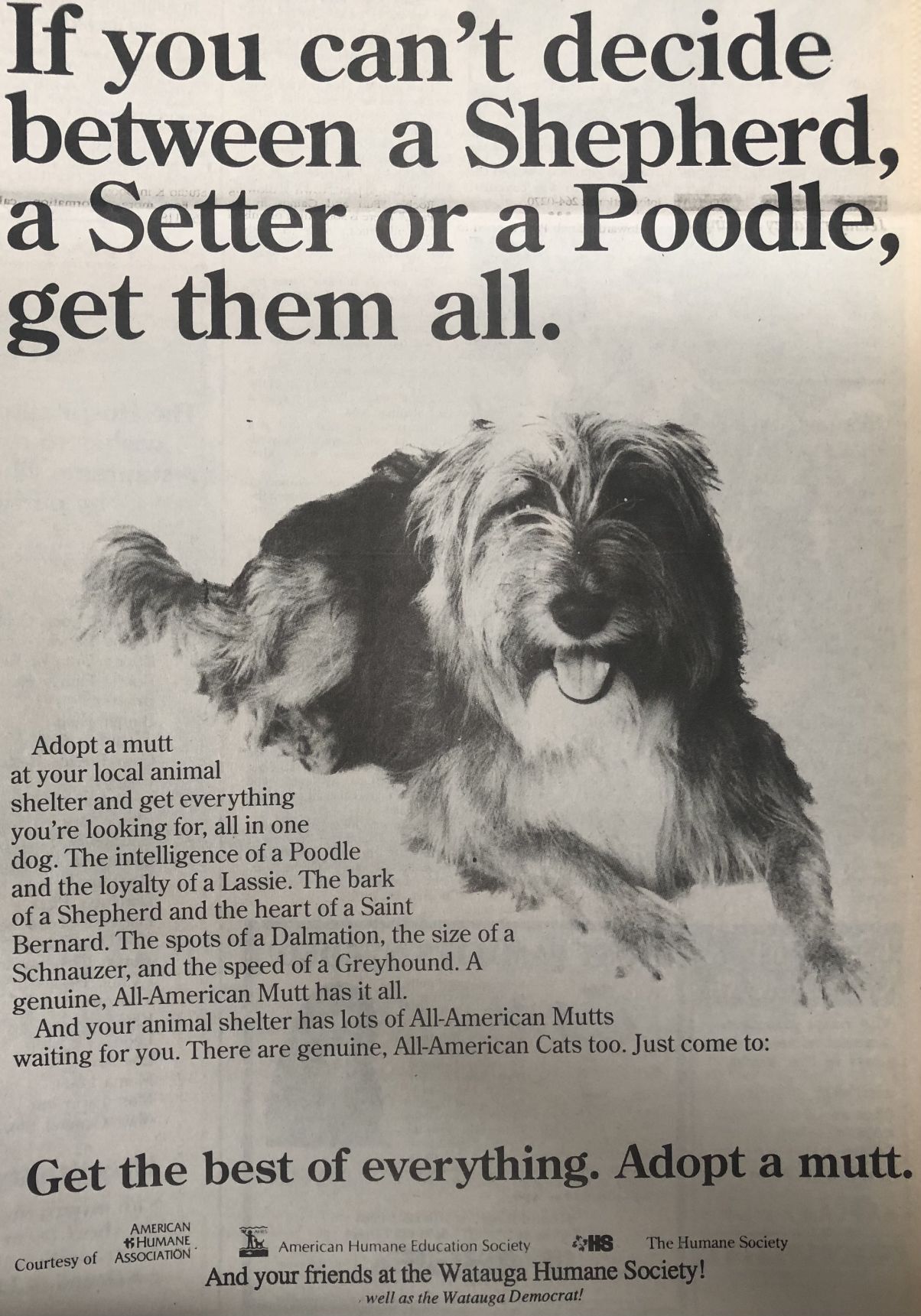 An ad for the Watauga Humane Society as seen in an Aug. 11, 1993, edition of the Watauga Democrat. 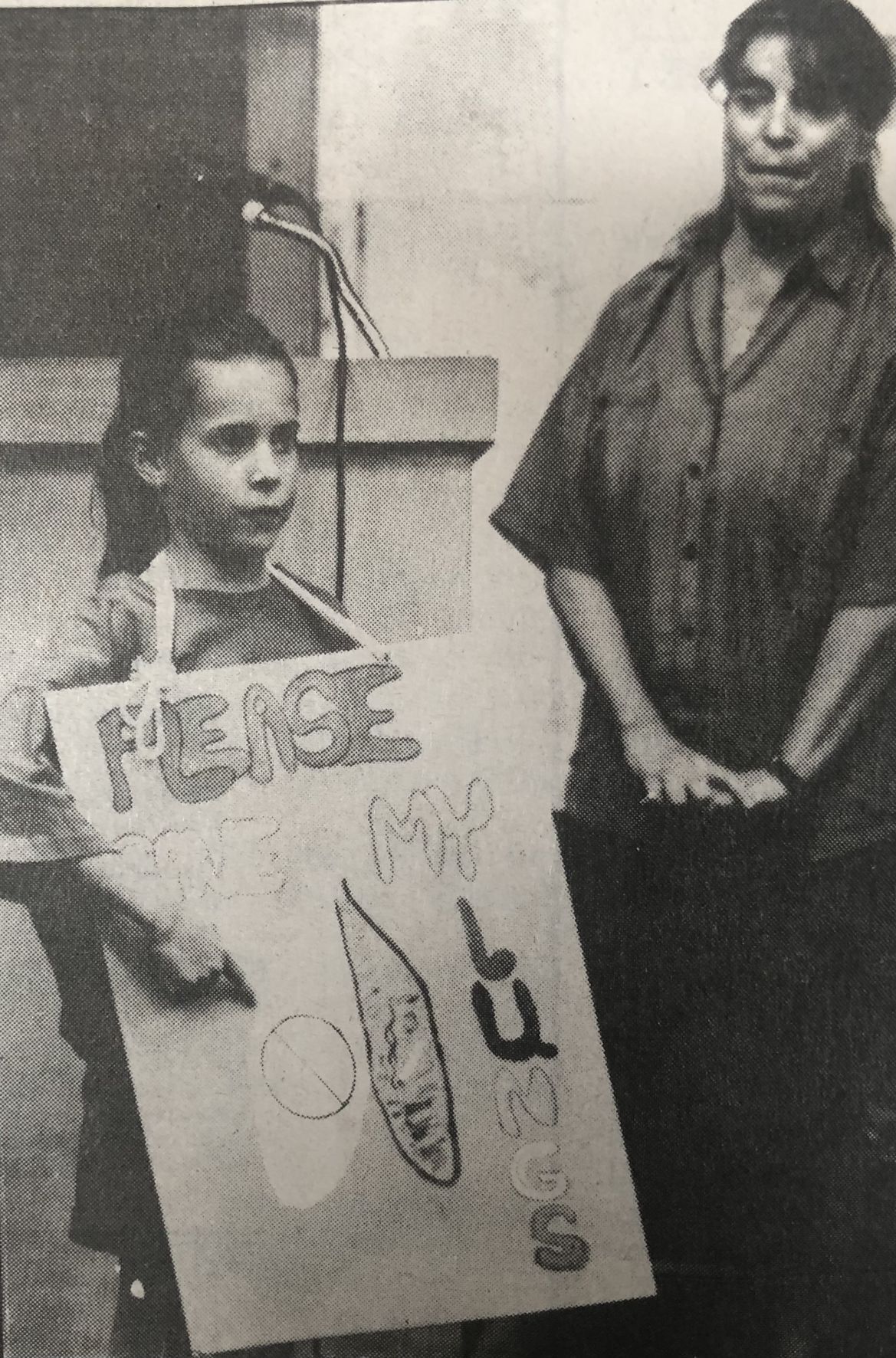 Hannah Brown, with her mother, Diane, asks council members to help keep her lungs clean by passing a smoking ordinance as seen in an Aug. 11, 1993, edition of the Watauga Democrat. 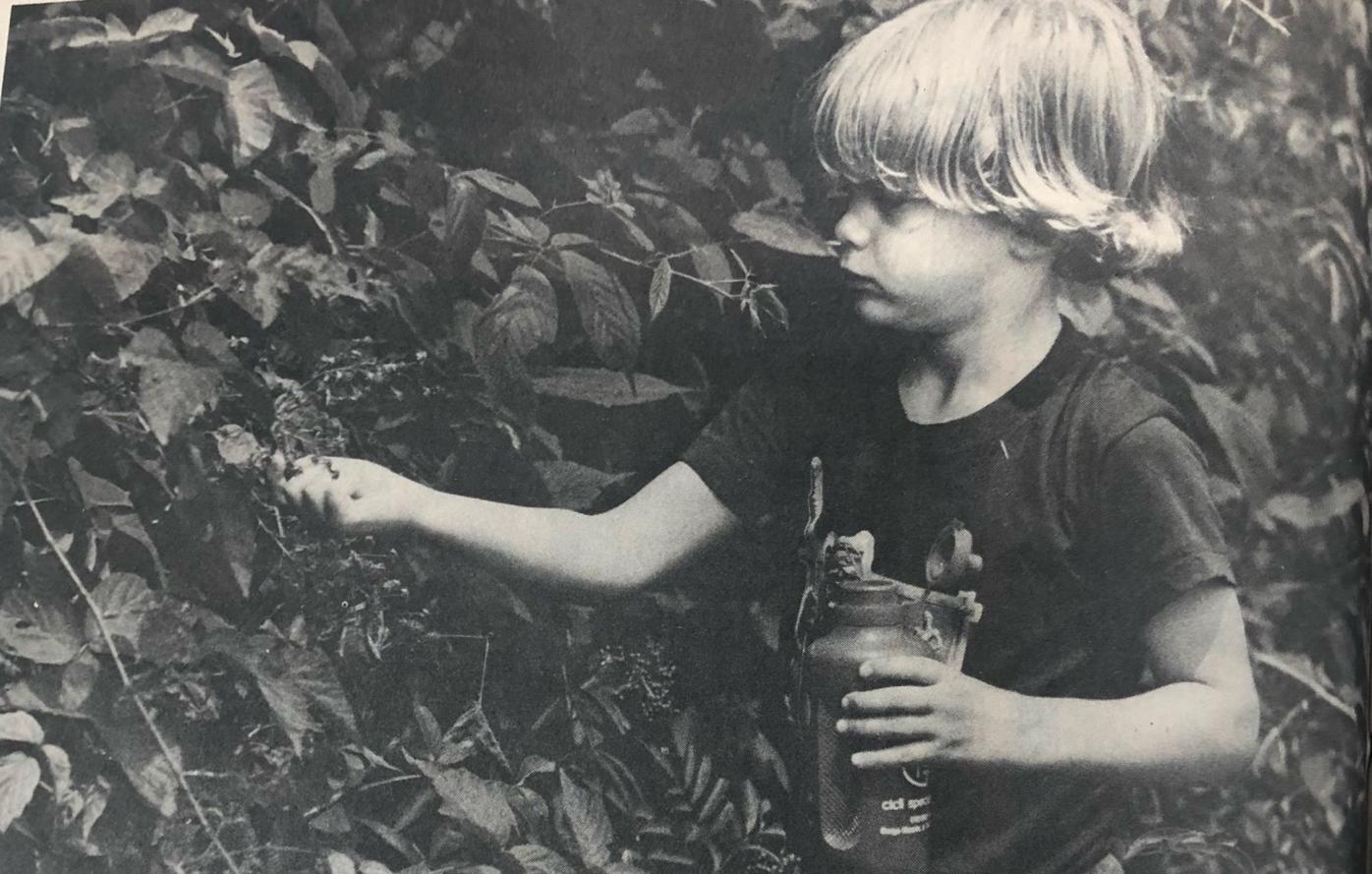 Shayne Walker, 6, and his dad were touring Boone on they bicycles when Shayne spotted a patch of the berries on the side of the road as seen in an Aug. 8, 1983, edition of the Watauga Democrat 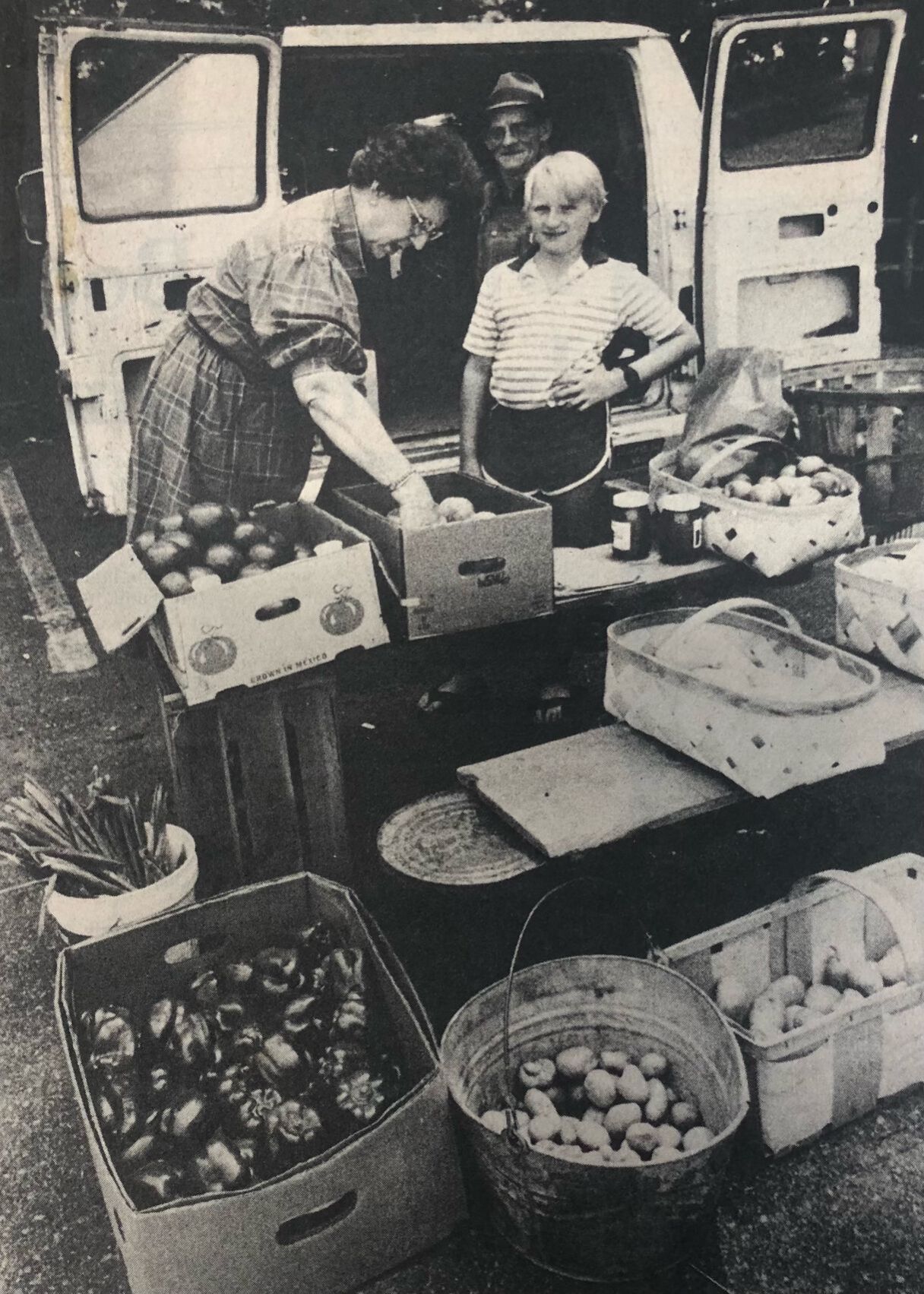 Mildred Hodges, Denver Norris and his grandson Scott spend time together at the county Farmer’s Market located at the Horn in the West parking lot as seen in an Aug. 10, 1983, edition of the Watauga Democrat

Watauga County Sheriff Mark Shook displays 119 marijuana plants seized in a raid as seen in an Aug. 11, 2003, edition of the Watauga Democrat.

Evelyn Noblett of Boone, as seen in an Aug. 8, 2003, edition of the Watauga Democrat, was awarded Athlete of the Year by Special Olympics of North Carolina.

An ad for the Watauga Humane Society as seen in an Aug. 11, 1993, edition of the Watauga Democrat.

Hannah Brown, with her mother, Diane, asks council members to help keep her lungs clean by passing a smoking ordinance as seen in an Aug. 11, 1993, edition of the Watauga Democrat.

Shayne Walker, 6, and his dad were touring Boone on they bicycles when Shayne spotted a patch of the berries on the side of the road as seen in an Aug. 8, 1983, edition of the Watauga Democrat

Mildred Hodges, Denver Norris and his grandson Scott spend time together at the county Farmer’s Market located at the Horn in the West parking lot as seen in an Aug. 10, 1983, edition of the Watauga Democrat

After a slow start in 1983, construction in Boone had taken off in the last two months with the building boom spurred by new apartment and condominium developments, an article in an Aug. 10, 1983, edition of the Watauga Democrat stated.

“Although the number of new multi-family residential units added in Boone so far this year do not yet match last year’s phenomenal building, town officials see no signs that the market is abating,” the article stated. “A total of 111 building permits were issued by the town from January through July for all types of construction (including building renovations), at a value of $5,909,800.”

According to the article, nearly half of all the construction value was attributed to apartment and condominium projects.

“There is a strong switch to condominiums,” said Town Planner Phil Smith in the article. “I think the construction of apartments last year weakened the market somewhat; in everything you read, condos are the way housing is going.”

“The latest multi-family residential project in Boone this year has been the condominiums for the former site of the Daniel Boone Hotel in downtown Boone,” the article stated. “That project will add 51 units and is valued at $1,356,600, according to Smith.”

Other projects approved by the town in July 1983 alone, according to the article, include four other condominium units and 46 apartment units.

“Just three years ago, Boone was faced with what Smith termed as a serious housing shortage, based on a vacancy rate of less than 1 percent of the town’s 3,109 units reported in the 1980 census,” the article stated. “Planners say a healthy vacancy rate is closer to 5 percent.”

“I would think this would slow down, reach its peak,” Smith said in the article. “I don’t see where the people are coming from to fill the units. But there are no signs that it is slowing down yet, and some realtors I’ve talked with think the market is still strong.”

According to the article, Smith said that the rule of thumb in Boone was that apartment construction was centered near the university, with the market basically aimed at students, while condominiums were scattered through town, with most of the units being sold to out of town people.

“(Smith) attributed the large volume of building activity last year and this year to several factors primarily the improving economy, relatively low and stable interest rates, and support from the town in the form of improved water and sewer facilities and zoning changes,” the article stated.

The 22-foot-tall retaining wall behind Highland Commons Shopping Center on N.C. 105 in Boone was nearly finished, an Aug. 13, 1993, edition of the Watauga Democrat stated, but not after it had become something of a novelty to area shoppers and passers-by.

“The wooden wall itself is built out of salt-treated timbers,” the article stated. “It is 22 feet high and has two terraced, grassed sections, which each add another 36 feet to the structure. Joe Napoleon, a staffer in the Boone department of planning and inspections, said the wall was built with nearly 1,000 cross ties. Behind them is almost 9,000 tons of crushed stone with a layer of topsoil on top.”

According to the article, the terraced areas had been seeded with grass and covered by a blanket that would eventually disintegrate. The wall was designed to hold the mountain behind the shopping center in place and prevent a landslide, which would tumble on top of the small stores below.

“The wall was built by Dirt Dobbers of Charlotte and Eggers Constriction of Banner Elk,” the article stated. “Carl Fidler, who is co-owner and developer of the shopping center, said the gravel behind the wall will facilitate quick drainage, which should keep the mountain secure. The wall has been built over the summer.”

According to the article, Napoleon said the wall was originally to be a series of four small walls. But the project’s engineer changed his mind and went instead with one 22-foot-tall wall. Napoleon was not sure if the wall was the tallest such structure in Boone.

“Napoleon said the wall’s specifications predict it will last at least 40 years,” the article stated. “But who knows? The Boone wall may last long enough to become as historical as ancient roman structures.”

“On Saturday, Aug. 2, the Special Olympics of North Carolina presented 10 state-level awards to individuals, organizations and families,” an article in an Aug. 8, 2003, edition of the Watauga Democrat stated. “Recipients hailed from Roxboro, Maxton and Charlotte, among others. However, the Athlete of the Year award was presented posthumously to Evelyn Noblett of Boone.”

According to the article, Noblett died on Dec. 20, 2002, at the age of 60 after a bout with cancer. Friends of Noblett believed, though, her legacy would always remain.

“When you went to the hospital to see her, she’d turn it back to you and see how you were doing and handling things,’’ Karon Poteat, local coordinator for Special Olympics of Watauga County, said in the article. “Probably the greatest or strongest thing, when you were in Evelyn’s presence, was she’d make you feel so special and did so many things for so many other people — her coaches, her community. Evelyn was so inspirational and so uplifting.”

“As a child, Noblett watched the 1968 Special Olympic International Games on her family’s television set,” the article stated. “Upon seeing the games, she immediately wanted to become involved, hoping to be accepted among the other athletes.”

Quoted in an interview featured in the cookbook, “A Pinch of Gold: Winning Recipes Inspired by the athletes of the Special Olympics North Carolina,” Noblett said, according to the article, “I remember crying because I couldn’t be up there doing what they were doing. I remember my mom saying ‘No, Evelyn, you’ll never do anything like that.’”

“According to Noblett, her mother was terribly concerned for her daughter’s safety,” the article stated. “She was pulled out of school in the fourth grade by a doctor’s recommendation and her parents restricted her from working as an adult.”

“She told her mom that she always wanted to compete in the Special Olympics,” Poteat said in the article. “When her parents died and she was left on her own, she got involved in Watauga Opportunities and from there got into Special Olympics. So, she did get to live out her dreams.”

“From Watauga Opportunities, Noblett received a job at Taco Bell and worked there for almost 10 years,” the article stated. “For the last couple of years, she worked at Kentucky Fried Chicken, where she would clean the lobby and assist in customer service.”

In the Special Olympics, the article stated, Noblett competed in bocce (outdoor bowling) and other athletics, later representing fellow athletes from across the state and speaking to Special Olympics executives in Washington, D.C.

Noblett also coached Stacey Critcher, the previous Special Olympics Athlete of the Year, also from Boone, according to the article.

“I think it’s a wonderful testament to Watauga County Special Olympic athletes,” Poteat said in the article. “Especially because it was the second year in a row we received it at the state level.”

“We should all strive to be like her,” Poteat said in the article. “I think the rest of us are the ones with disabilities. I honestly couldn’t say what Evelyn’s disability was.”