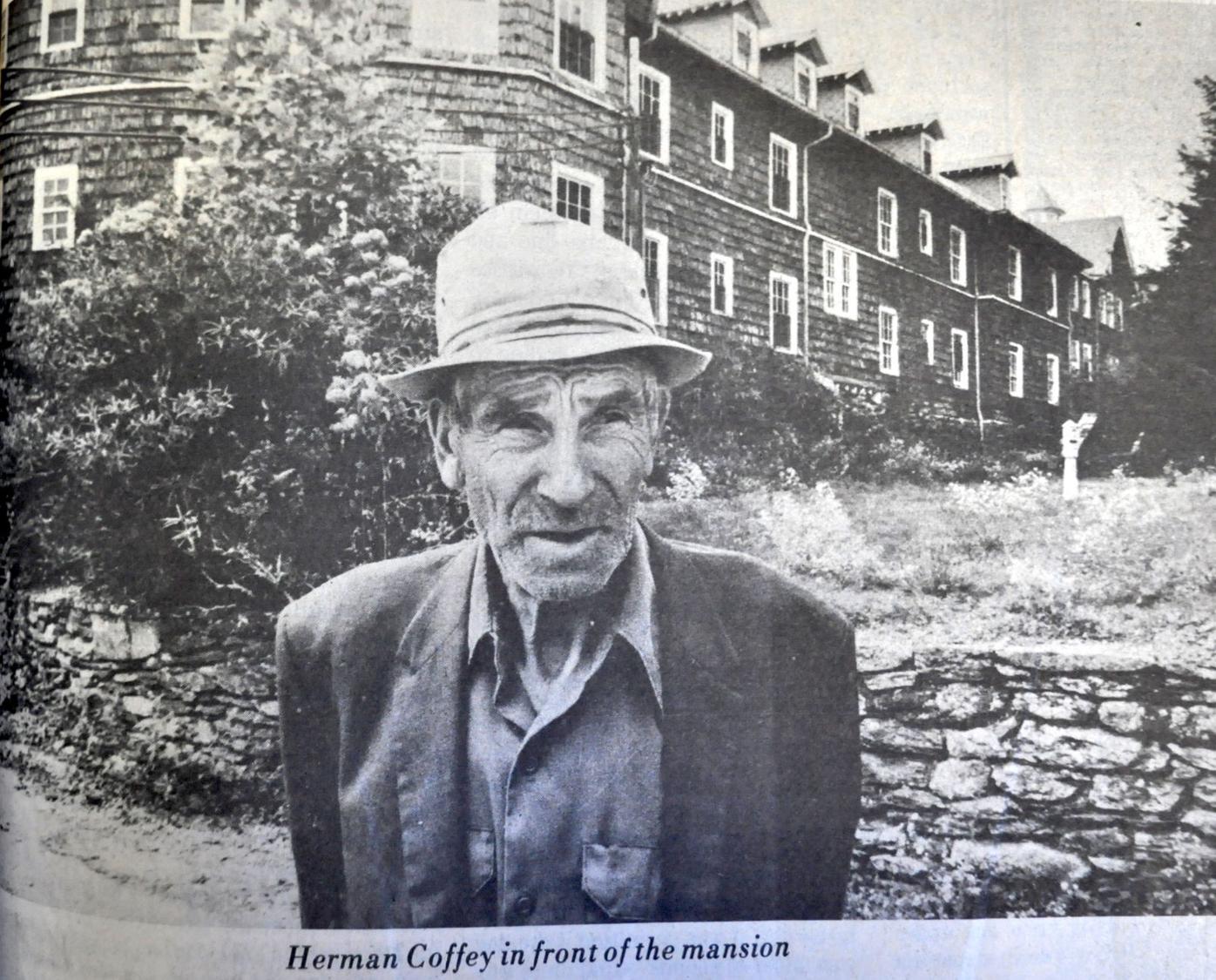 Herman Coffey, the longtime caretaker of the Mayview Manor, stands in front of the abandoned hotel in Blowing Rock before it was demolished. 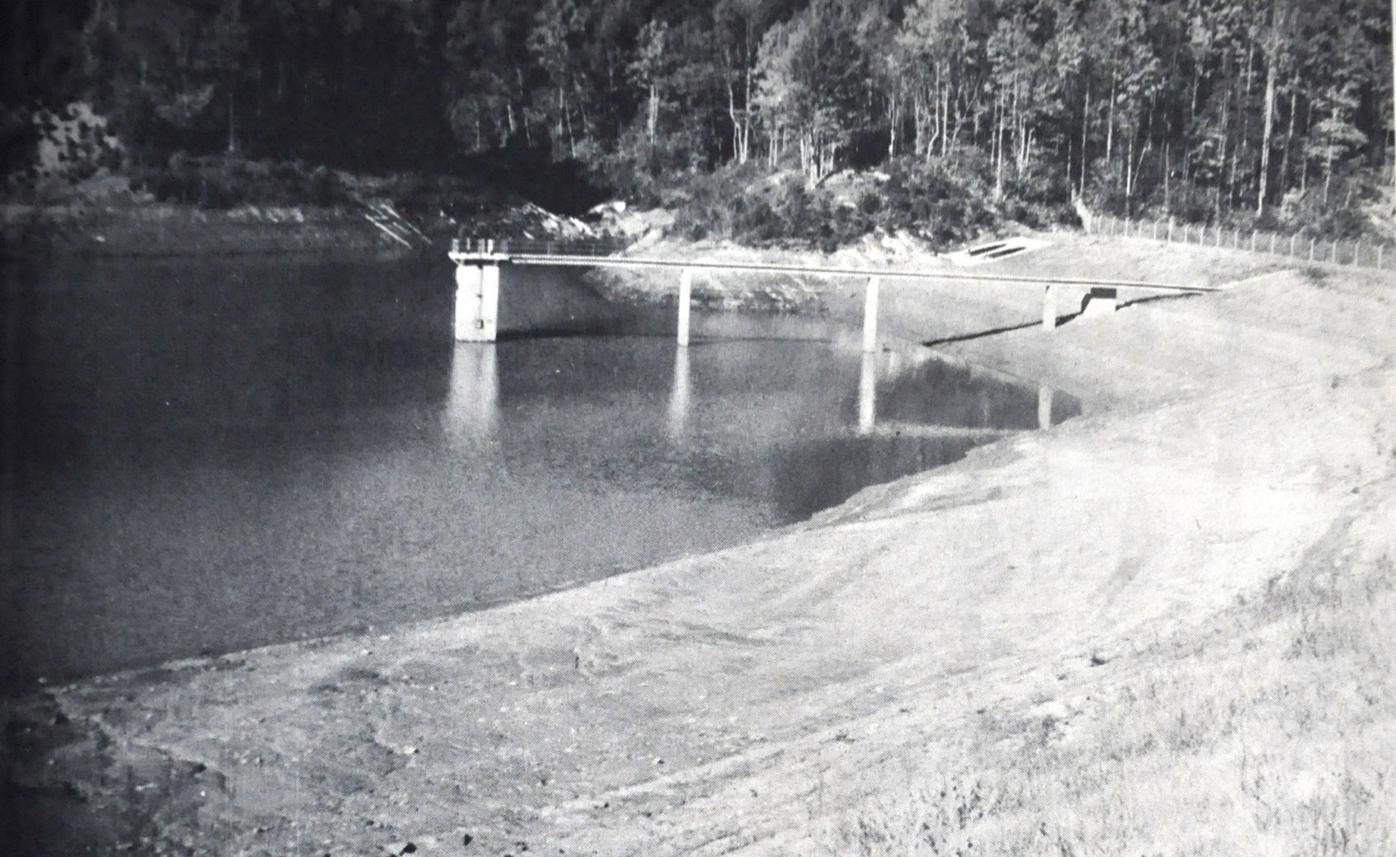 In this photo in the Oct. 10, 1968, Watauga Democrat, Boone’s reservoir above Winkler’s Creek was experiencing low water levels. 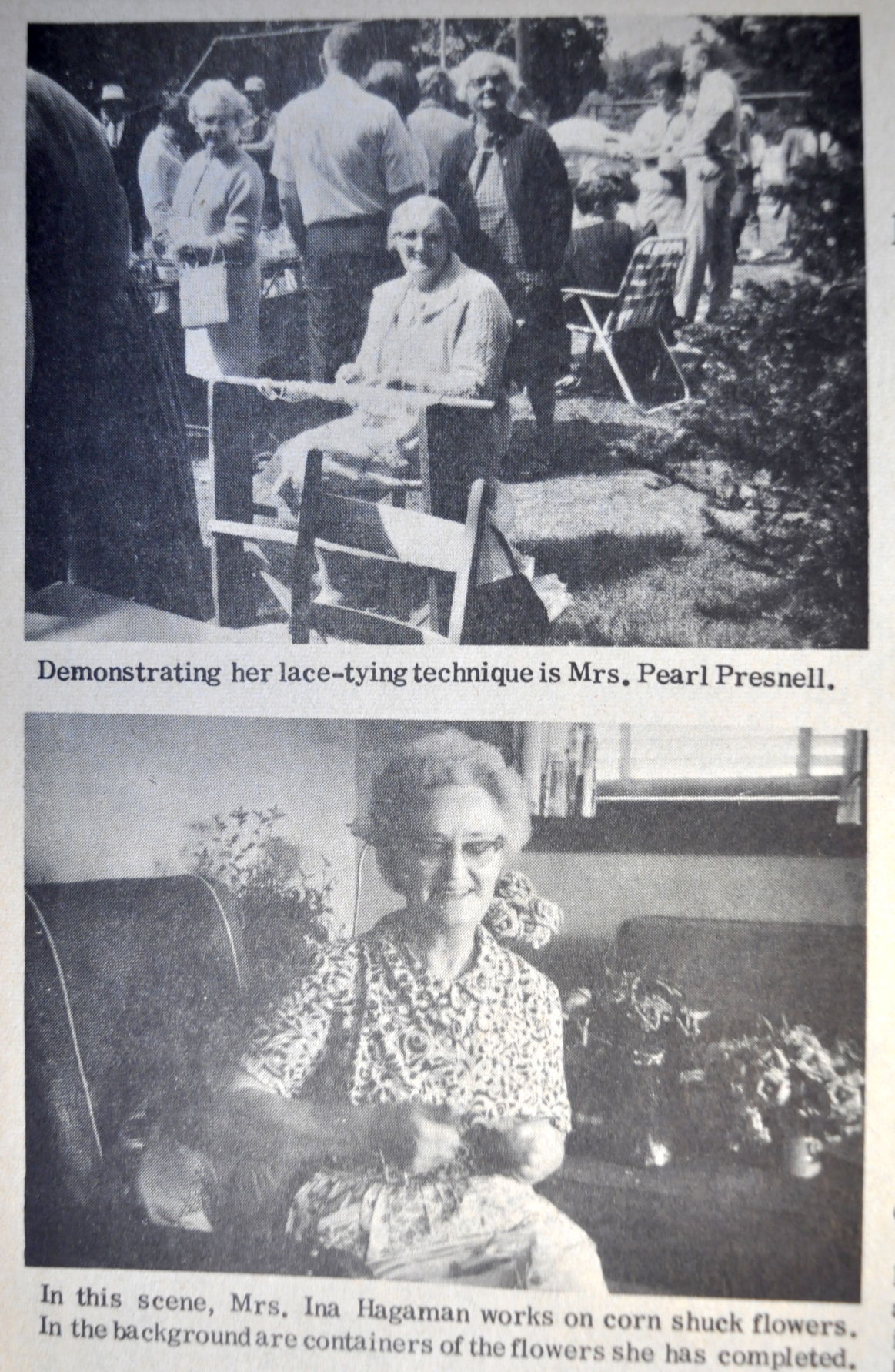 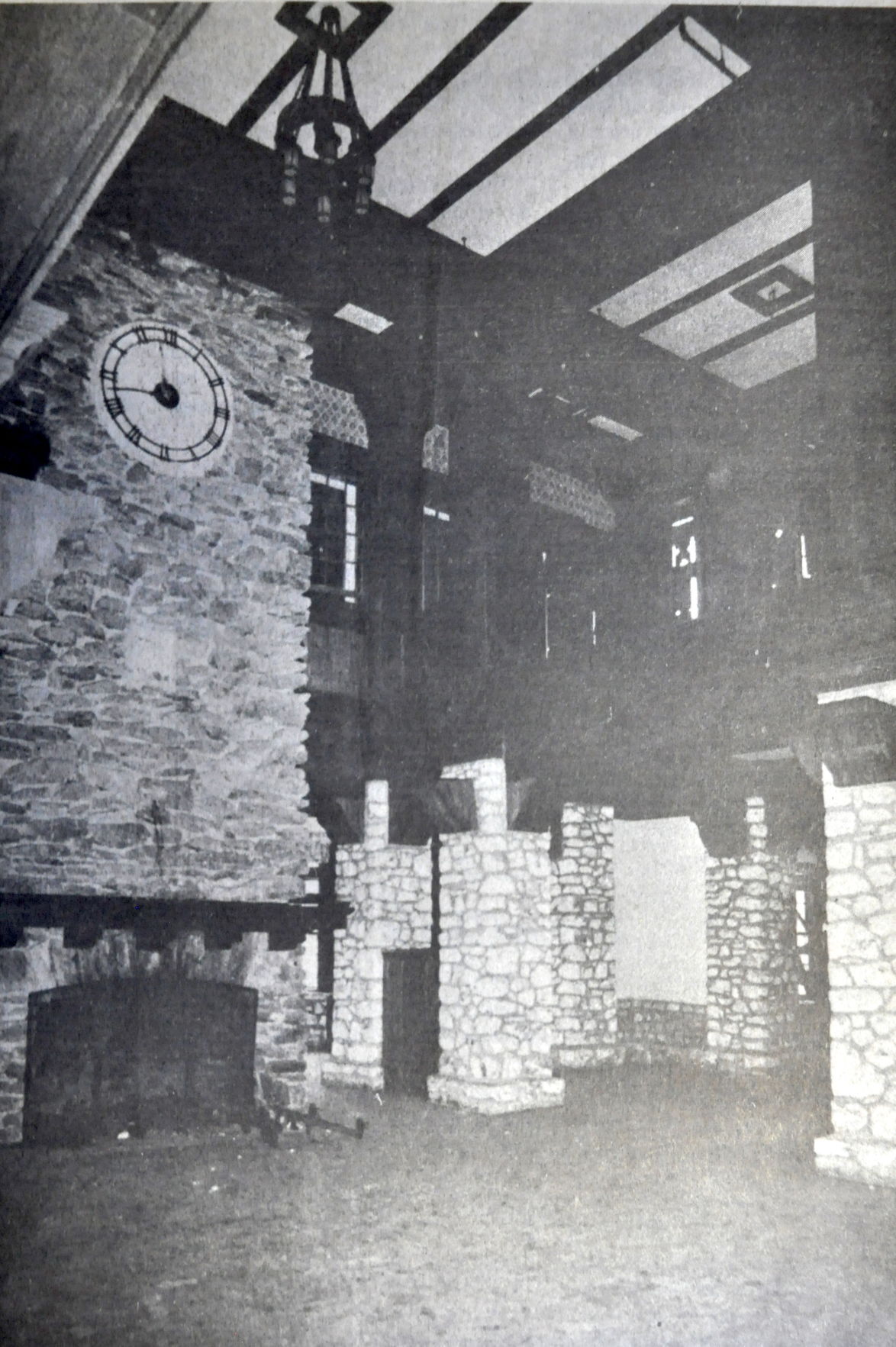 The ‘main room’ of the abandoned Mayview Manor is pictured in this 1978 photo.

The remains of the Mayview Manor’s covered walkway to the dorms and the presidential suite are pictured in these 1978 photos. 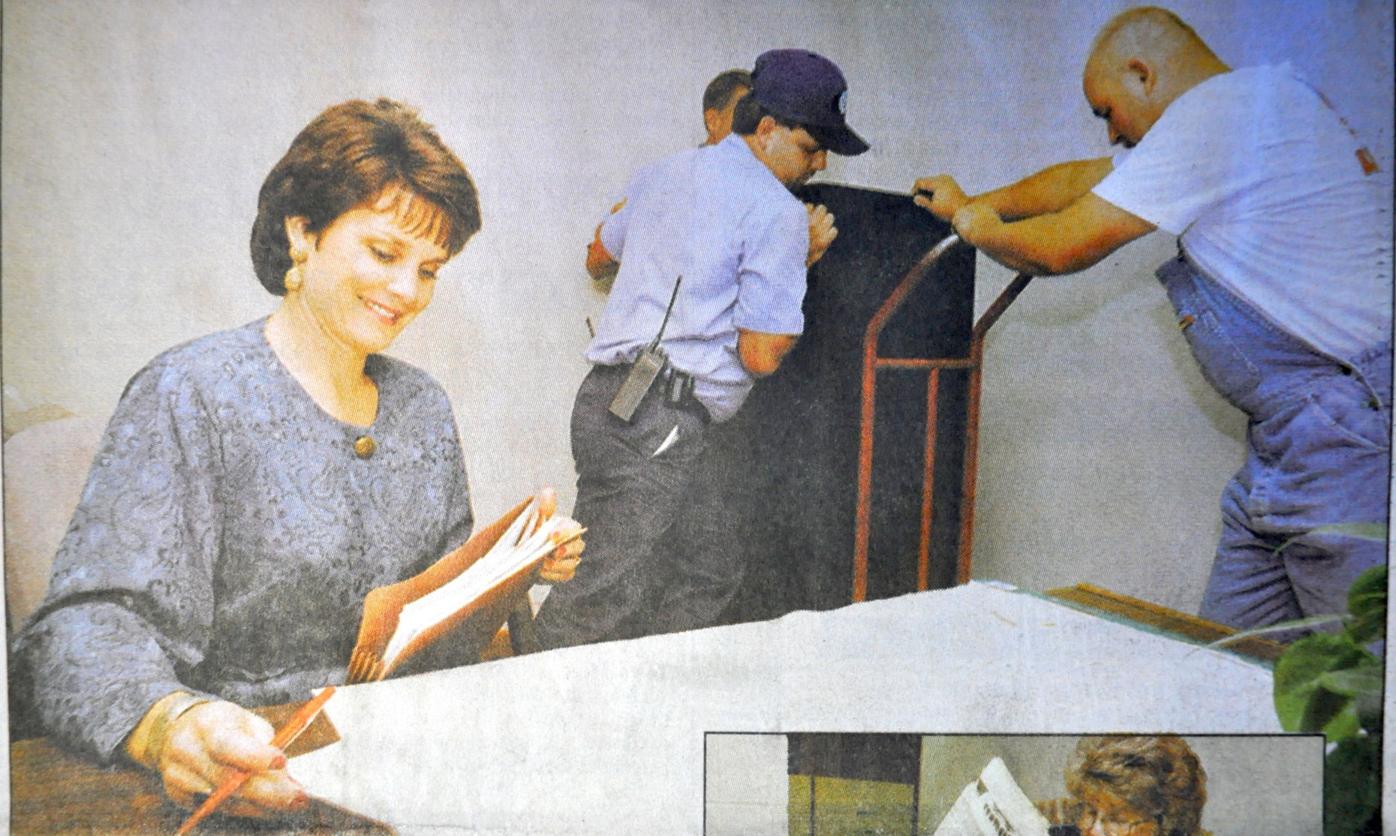 In this 1998 photo, Boone Human Resources Officer Peri Moretz works while furniture is moved as part of the Boone Town Hall relocation. 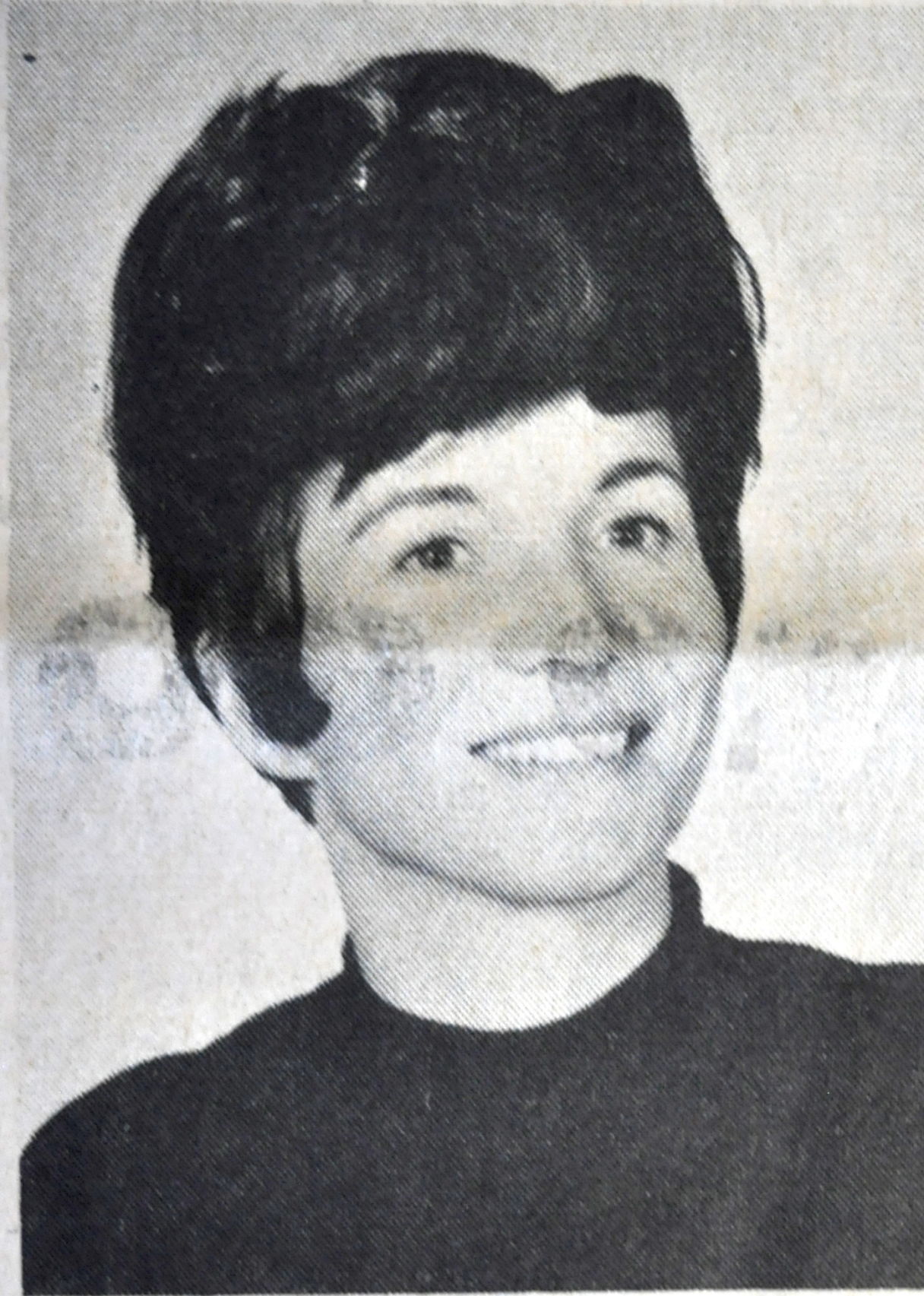 Sue Wilmoth of Boone was appointed public education chair for the Watauga County Heart Association, the Oct. 10, 1968, Watauga Democrat announced. Wilmoth would go on to serve as the executive director of the Boone Area Chamber of Commerce from 1976 until her retirement in 1991.

Low water levels in the Winkler’s Creek reservoir and an algal bloom resulted in an emergency water situation for the town of Boone in the fall of 1968.

Neal Blair Jr., town manager at the time, said that the 39-million-gallon lake that supplied the town with water held about 12 million gallons at the time, and that recent showers did little to affect the water level. And because of the algal bloom, only the top few feet of water in the lake was deemed usable.

“The town of Boone is now using water pumped from three wells which can furnish 180 gallons per minute,” the Watauga Democrat reported. “On weekends water is also tapped from the Appalachian State University supply. Blair said that water also is being used from old town dam located above the new dam.”

In other news, the Democrat reported that Watauga County had the eighth highest growth rate of the state’s counties in the 1966 Census estimates, increasing by 17.5 percent between 1960 and 1966. The figures showed that 24 counties experienced growth of 10 percent or more.

The seven counties ahead of Watauga were Cumberland, Onslow, Orange, Wake, Davidson, Mecklenburg and Catawba.

The newspaper also announced that two Watauga women, Ina Hagaman and Pearl Presnell, both of Sugar Grove, would represent the Blue Ridge Electric Membership Corporation at the Cooperative Crafts Exhibition in Washington, D.C. Presnell made hand-tied lace, and Hagaman made dolls and flowers from corn shucks as well as whimmy-diddies (toys) from small sticks of wood.

A contract drawn up in 1977 excluded Blowing Rock from the county ambulance service, which was provided by a private company.

“Commissioner Paul Combs said he thought the arrangement was in keeping with the wishes of the town of Blowing Rock,” the newspaper reported, but “the present town board, however, maintains that Blowing Rock was excluded without consulting town officials.”

A feature in the newspaper edition shared the story of Herman Coffey, the caretaker of the Mayview Manor, a once grand hotel in Blowing Rock that was set for demolition in 1978. Coffey, 72, had been the caretaker of the 56-year-old landmark for nearly four decades, living in a house adjacent to it for almost as long.

“He was there when the grand hotel was at its finest, and was also present when it closed its doors to the public for the last time,” the article stated. “Mayview Manor, the ‘mountain mecca of aristocrats’ from 1922 to 1966, catered to the wealthy. Hotel guests enjoyed sports of all types, elegant cuisine, dancing and conventions.”

“Presently the manor is being stripped of its rare chestnut wood found in the main building,” the newspaper stated, as the hotel was being torn down to make room for a new subdivision.

The Watauga Democrat reported on Oct. 7, 1998, that the Boone Town Hall was preparing to relocate, moving from offices next door to the downtown Boone fire station to the old First Union building down the block.

“According to former Boone mayor and local historian Wade Brown, the old First Union building was constructed during the 1960s, but the property was once the private home of Dick and Emma Greene,” the article stated. “Mr. Greene, Brown said, had a little store in the home’s basement where he sold records, guitars, banjos and other musical instruments, and Mrs. Greene ran ‘a very fine boarding facility’ out of the home, with rooms to rent upstairs.”

“I came down with mumps one time,” Brown told the newspaper. “She let me have a room there so I could stay in town and do my work. I lived in Blowing Rock at the time.”