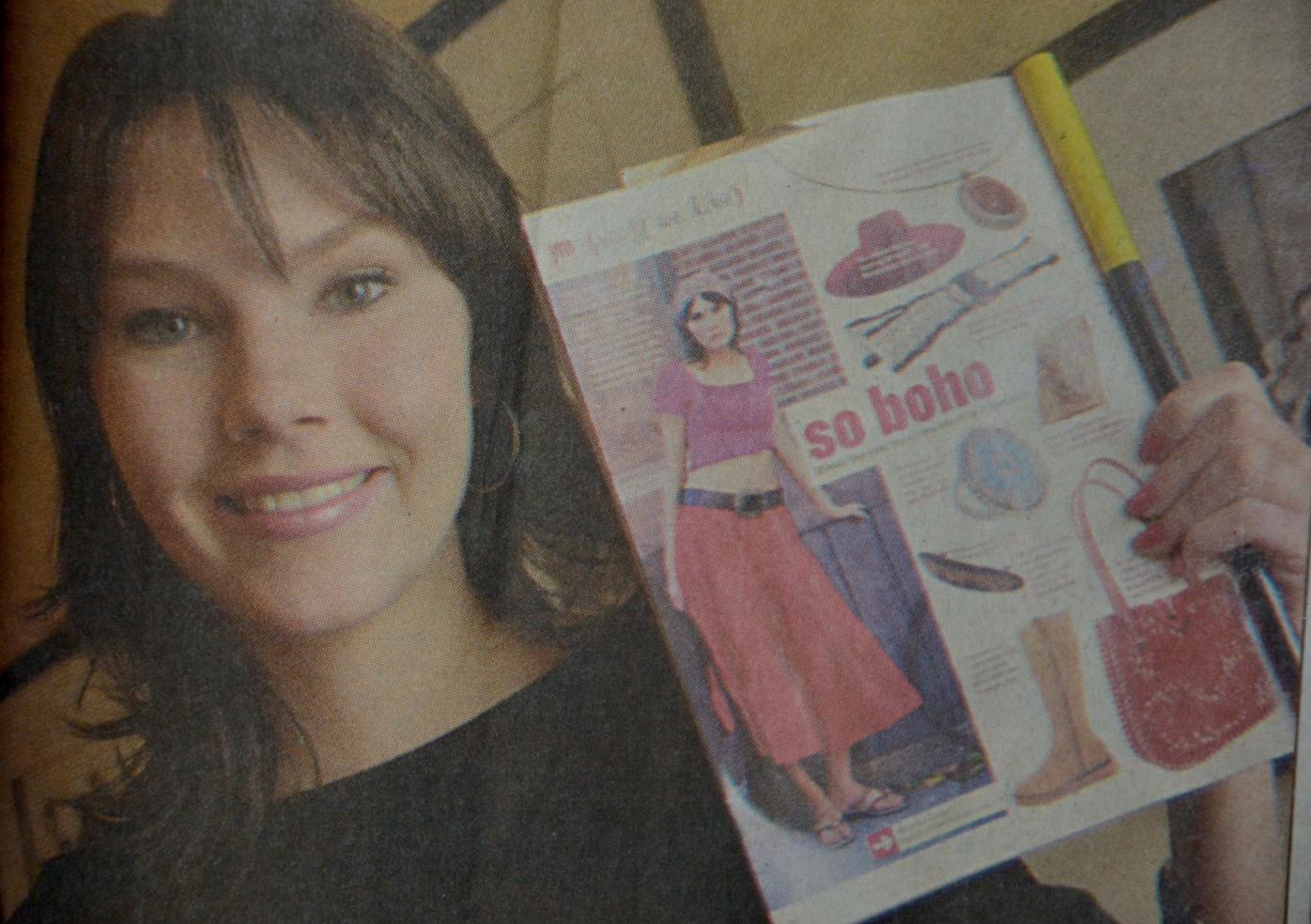 Boone resident Tenessia Isaacs holds up an issue of the YM magazine featuring her photo after she signed a contract with Elite Modeling Agency in New York City in January 2002. 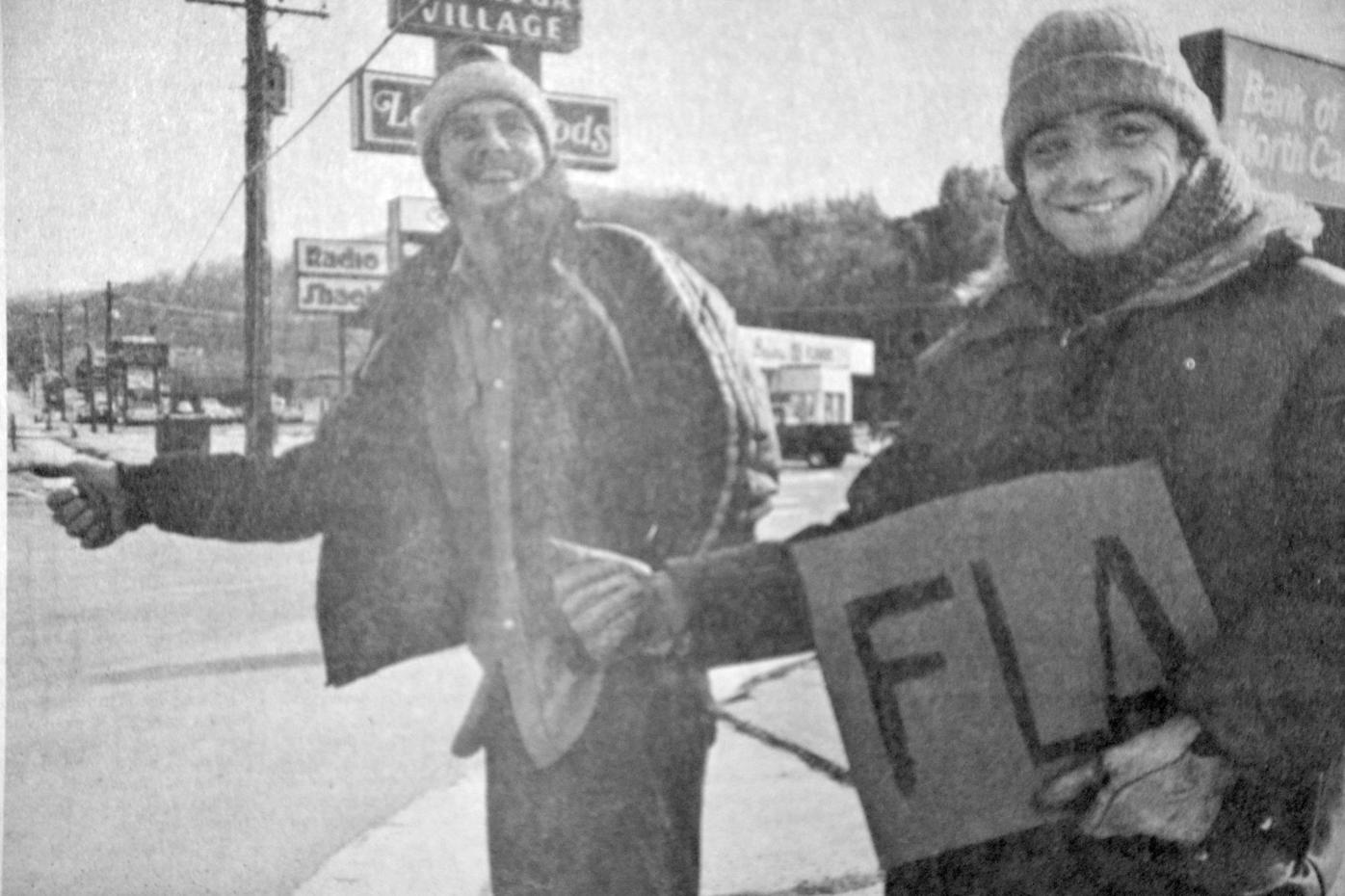 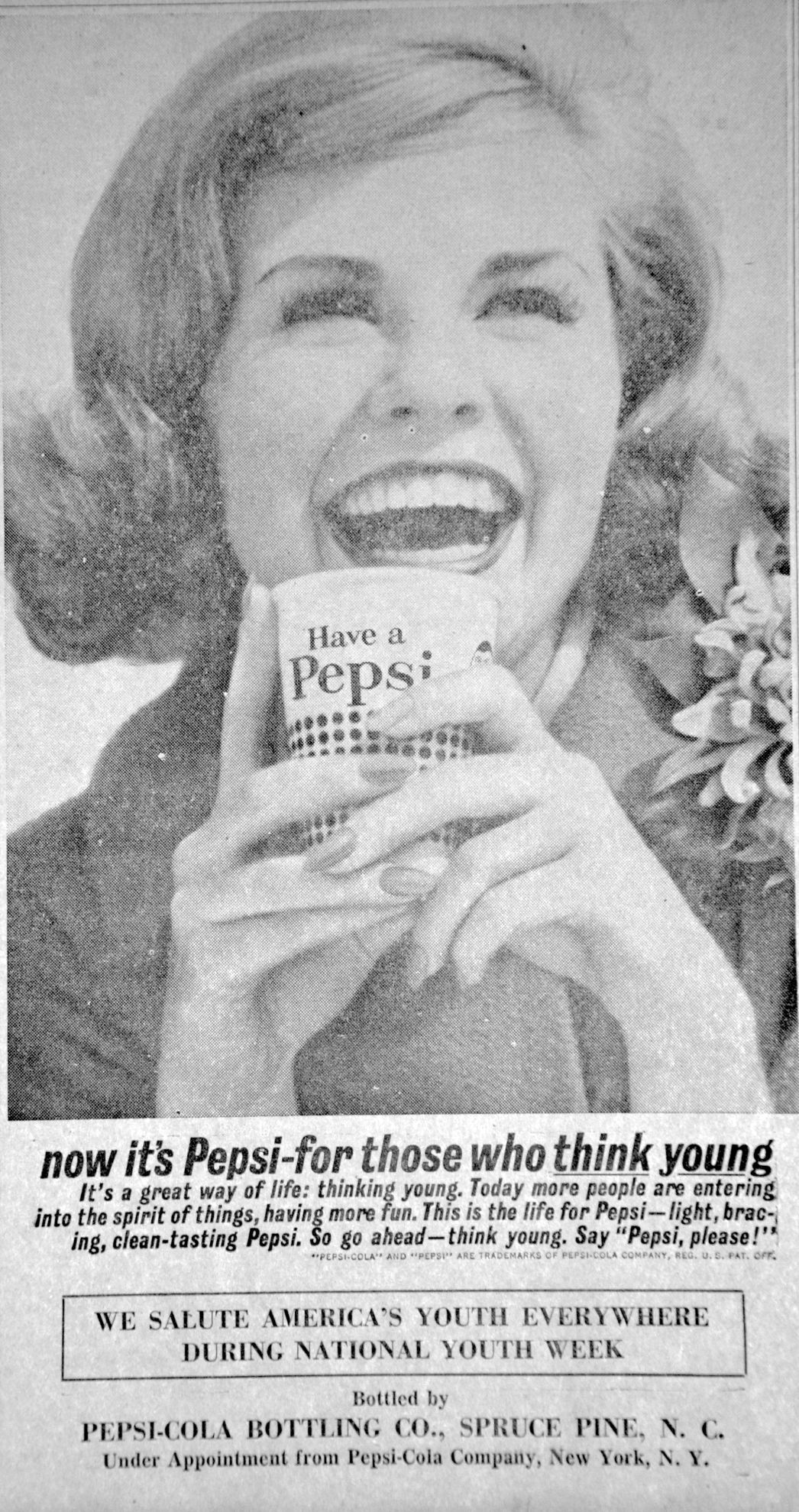 A 1962 Pepsi advertisement is featured in the Watauga Democrat newspaper. 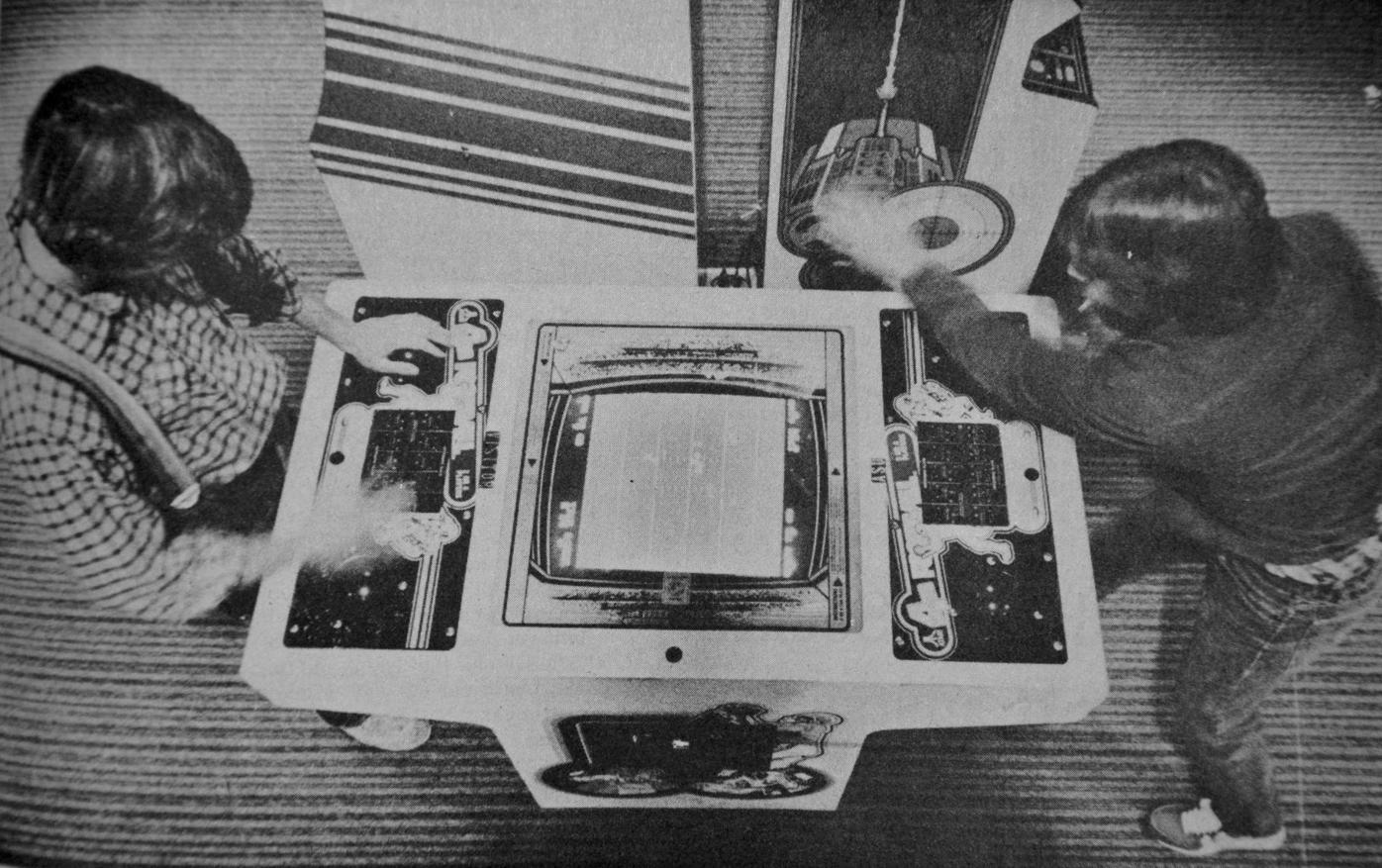 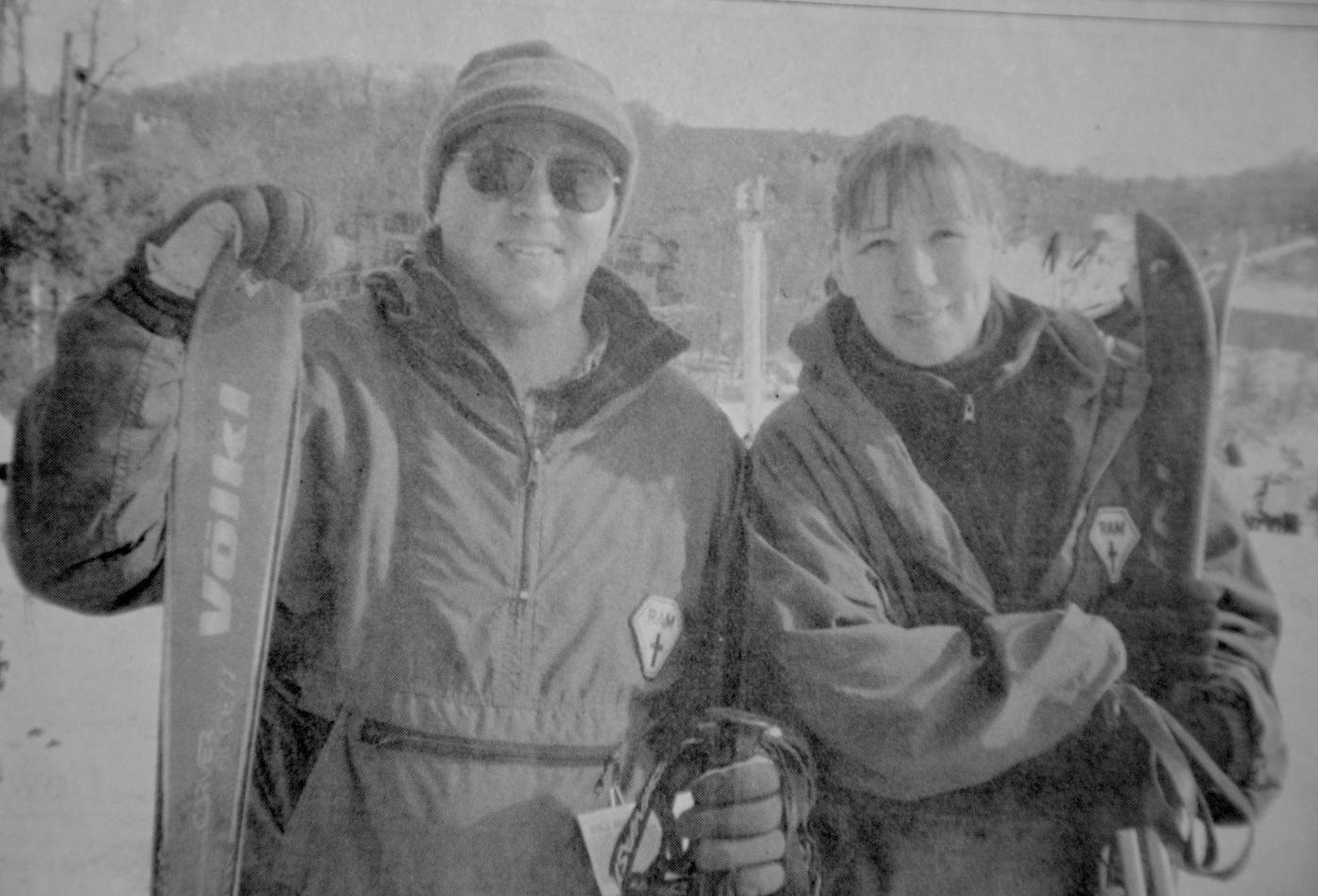 Richard Tidyman and Amanda Young volunteer their time at Appalachian Ski Mtn. and Beech Mountain to help with a variety of tasks in January 2002.

Boone resident Tenessia Isaacs holds up an issue of the YM magazine featuring her photo after she signed a contract with Elite Modeling Agency in New York City in January 2002.

A 1962 Pepsi advertisement is featured in the Watauga Democrat newspaper.

Richard Tidyman and Amanda Young volunteer their time at Appalachian Ski Mtn. and Beech Mountain to help with a variety of tasks in January 2002.

“R.H. Harmon, civil defense director for Watauga County, announced this week that the firm of Six Associations Inc. — architects and engineers of Asheville — are making a survey to locate and mark public fallout shelter space in Boone, Blowing Rock, (the) college campus and other areas in the county, including the schools,” stated an article in the Jan. 18, 1962, edition of the Watauga Democrat.

“Similar surveys are being conducted throughout the country in a nationwide effort to locate and mark existing facilities which will provide adequate protection against radioactive fallout. Preliminary estimates indicate that suitable shelter will be found for approximately one-fourth of the country’s population or 50 million people.

The article also stated that Harmon had said that Six Associations Inc. were under contract to the district Army Engineer to do the field work for the fallout shelter survey for Watauga, Ashe and Avery counties. To qualify before obtaining the government contract, several members of the firm received intensive specialized training in structural analysis of fallout shelters at a school sponsored by the Department of Defense.

The initial job for Six Associates Inc. was to fill out a form describing the structural components of each building which appears to offer a substantial degree of protection from radioactive fallout for at least 50 people, the article stated. The completed forms were to be processed and sent to the data processing center of the Bureau of Census. A film optical sensing device would read the forms and transfer the data to magnetic tape in a language understood by a high-speed electronic computer.

“The minimum standard of protection which a building must have to be considered a fallout shelter is prescribed as 20, Harmon said. This means that a person in the shelter area would receive only one-twentieth as much radiation as he would remaining outside.

“Congress earmarked $93 million of the $207 million supplement Civil Defense appropriation made last August to pay for this nationwide survey,” according to the article.

“The Watauga County Board of Commissioners has decided to seek a countywide referendum to ask the public whether or not it favors an airport in the area,” stated a Jan. 21, 1982, article in the Watauga Democrat.

The board instructed county attorney Stacy Eggers III to research the legality of calling for such as vote and putting it on the ballot for the May primary, the article stated.

“Larry Stanberry, board chairman, thanked the officials for appearing but said that the study had been terminated because it had not been properly conducted by Wilbur Smith and Associates, the Columbia, S.C, firm that was contracted to do the study. Commissioner Ed Critcher ... said that the majority of people he had talked with expressed opposition to an airport, and to the study, and that this opposition was due to Wilbur Smith’s failure to involve the people.

“Several citizens spoke out in favor of the study and an airport, and challenged the commissioners’ assumption that the majority of the people of the county opposed an airport.

“After further discussion, the board’s consensus was to let Eggers research the possibility of a referendum on an airport, while (Head of DOT’s aeronautics division William) Plentl said that DOT would cooperate by allowing the county to retain the state grant for the study until the issue was decided,” the article stated.

“Members recently purchased Hound Ears Country Club for $9.750 million turning the longtime resort into a private club,” stated an article in the Jan. 21, 2002, edition of the Watauga Democrat.

“Built in the early 1960s, Hound Ears Club is located just off N.C. 105 along the Watauga River. The 750-acre resort was purchased from Ed Claughton and his wife, Lois, of Blowing Rock and Miami, Fla., and his sister, Susie Schmidt, also of Miami, who had owned the resort since 1988. According to Claughton, a committee of 13 members comprised of experienced businessmen and professionals who have a diverse background made the purchase.

“Claughton purchased the club, which opened in 1963, from the Robbins family of Blowing Rock, who originally developed the property. The golf club was built upon farmland in the Shulls Mill community which is in the early years had an operating railroad station and general store. The area was a hub for the lumber business early in the last century.

“According to (Harry) Robbins, the golf course cost about $250,000 to build initially. The rest of the development wasn’t planned, it grew from people’s desire to live on the mountain overlooked the course. The resort has 300 homes and 80 condominiums, and according to committee officials, the club’s equity membership program is fully subscribed and has 300 members,” the article stated.