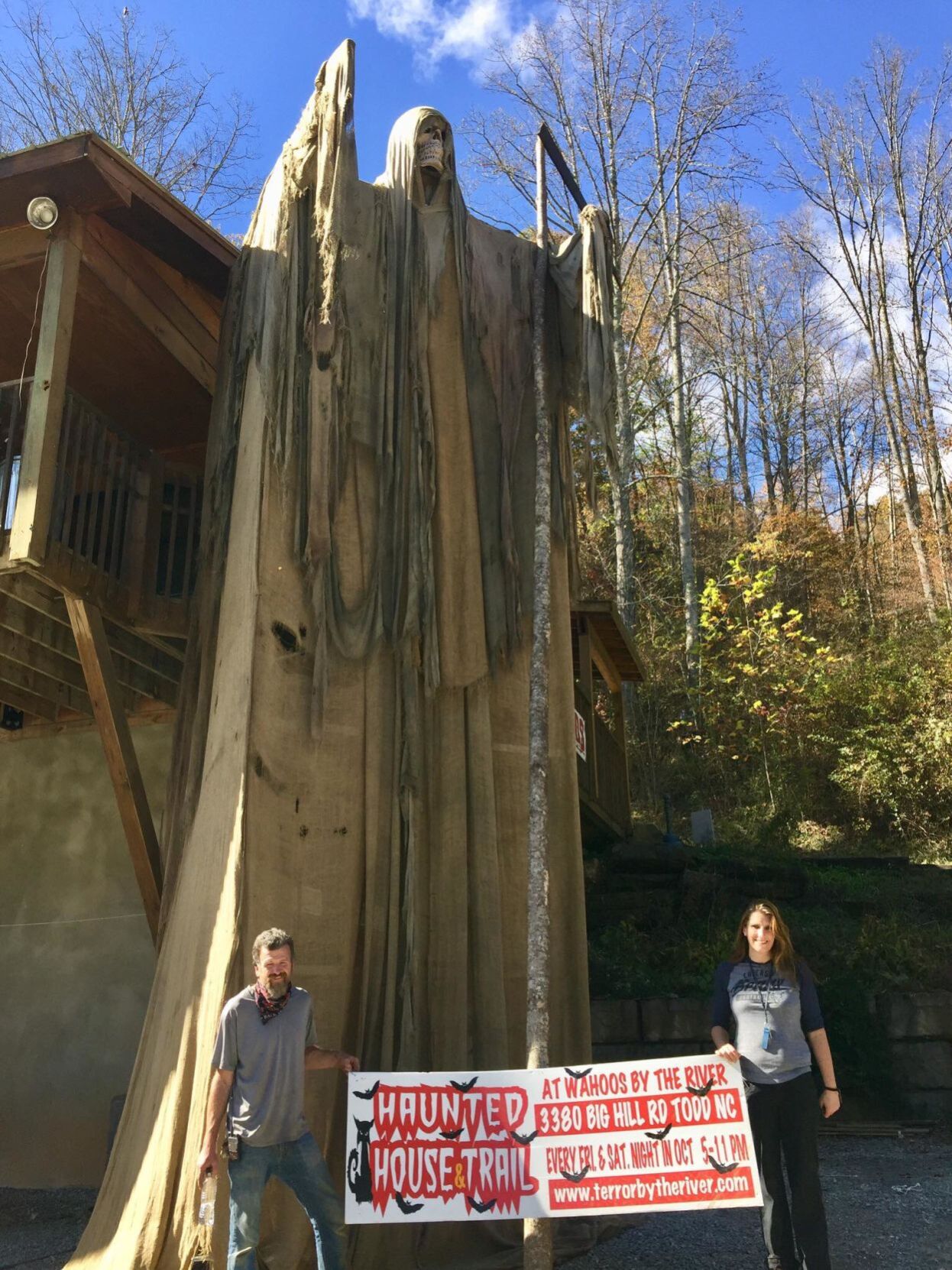 Kristina Ward poses with a skeleton crew at ‘Terror by the River.’

A spooky cemetery located at the ‘Terror by the River’ haunted trail. 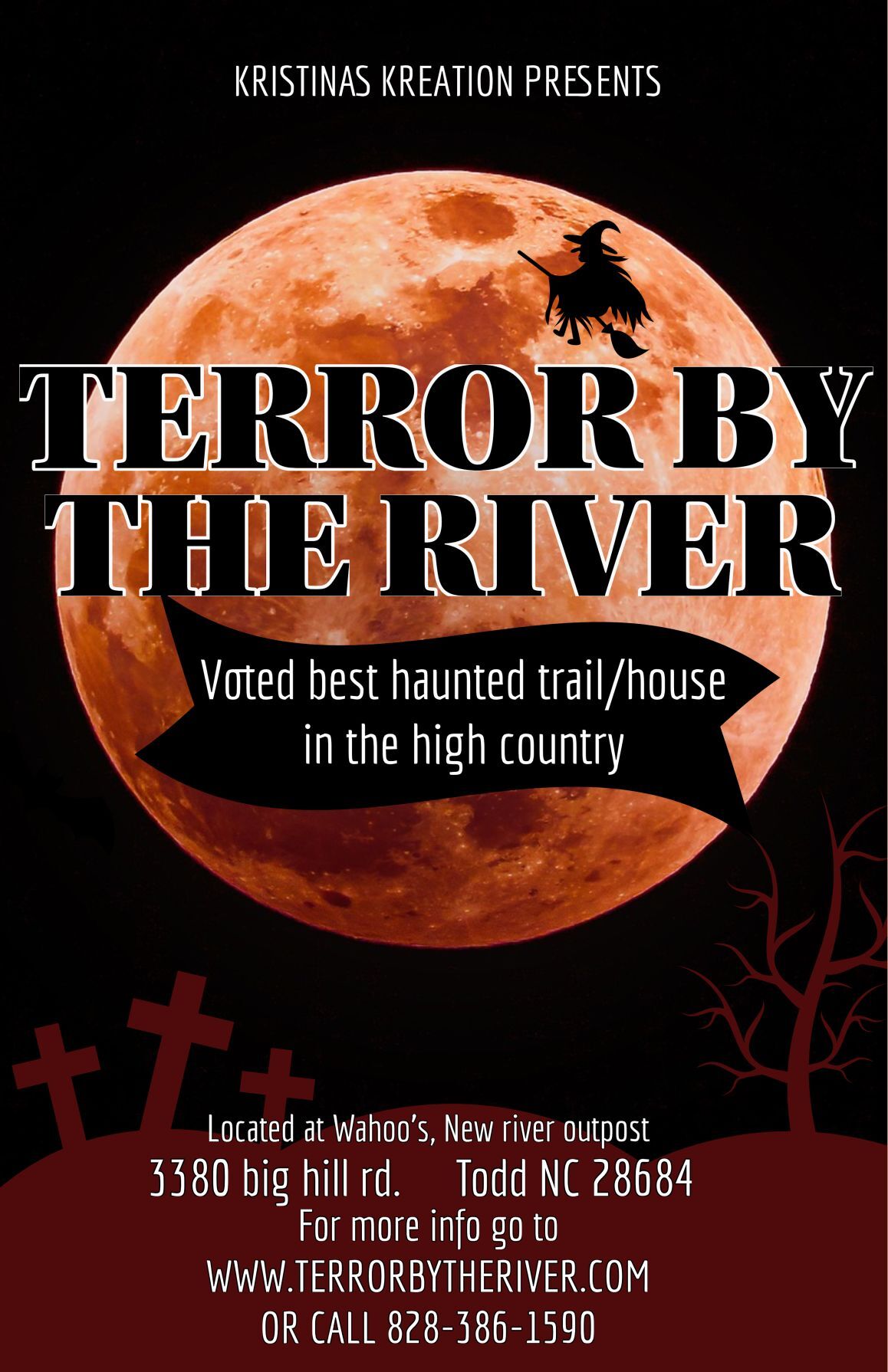 Promotional photo for ‘Terror by the River.’

Kristina Ward poses with a skeleton crew at ‘Terror by the River.’

A spooky cemetery located at the ‘Terror by the River’ haunted trail.

Promotional photo for ‘Terror by the River.’

TODD — A 26-foot effigy of “Death” lingers over the New River, part of a local spook trail that’s been dealing out scares to High Country thrill seekers this Halloween season. The imposing Grim Reaper was created by Matt and Kristina Ward, owners of “Terror by the River,” located at the Wahoo Adventure’s New River Outpost in Todd.

“We just wanted to have something a little different,” said Matt Ward, referring to the grim idol.

“I had bought a big skull and it was just sitting there and I didn’t know what to do with it,” said Matt Ward. “Then one night I said, ‘We should build a big Grim Reaper.’ Kris asked me how tall and I said about 30 feet tall.”

Since its construction, the Grim Reaper has become a bit of a conversation piece within the community, turning the heads of passersby and drawing people in to take a closer look and pose for pictures.

“We have people come in just to take pictures of it,” said Matt Ward. “The word is getting out, I hear people talking about it in restaurants and some of the local stores.”

Believing that they may have created the tallest Grim Reaper in the world, the Wards have recently appealed to the Guinness Book of World Records for confirmation and are currently awaiting their verdict.

“We’ve researched and we can’t come up with anything as big. We’ve gotten in touch with Guinness and now it’s just a waiting game now,” said Matt Ward, who expects confirmation from the record book company within 12 weeks. “As far as props in general, I think the tallest is 60 feet, but as far as actual reapers, I think we have that covered, at least in North Carolina.”

Terror by the River, which is in its second year of operation, started out as a dream of the Wards and has since evolved into a passion for creating a fun-filled and memorable experience for their attraction’s patrons, something they look forward to each fall.

“This has been my lifelong dream. I literally went to every haunted house I could possibly go to, that was my goal during October,” said Kristina Ward. “I finally got to the point where they weren’t scaring me anymore. So, I thought that it was the right time to make my own.”

“Truly, I do it a hundred percent for fun,” said Matt Ward. “When I saw that first group go through, just laughing and having fun, it hooked me. Personally for me, that’s why I do it.”

Visitors willing to brave “Terror by the River’s” haunted trail can expect to trek past haunted cemeteries, spooky skeletons and killer clowns. However, the attraction is willing to cater to their guest’s threshold for fear, toning down the attraction’s scares for kids or those simply not wanting to have too terrifying of an experience.

Aside from the haunted trail, “Terror by the River” offers a variety of different activities to suit folks from all walks of life. Those not interested in walking the trail can participate in a pumpkin carving, play games such as cornhole and checkers, or simply kick back with and soak in the event’s carnival like atmosphere with a hot chocolate, cider or smores. “Terror by the River” will also be hosting a trunk-or-treat on Halloween night from 3-6 p.m.

“Terror by the River” is located at 3380 Big Hill Road in Todd, NC, with the haunted trail being $20 per-person. Walk-ups are welcome, however, it is recommended that visitors hoping to walk the haunted trail make a reservation. To learn more about “Terror by the River” or to make a reservation, visit https://terrorbytheriver.com/haunted-house-haunted-trail/ or call (828) 386- 6001.