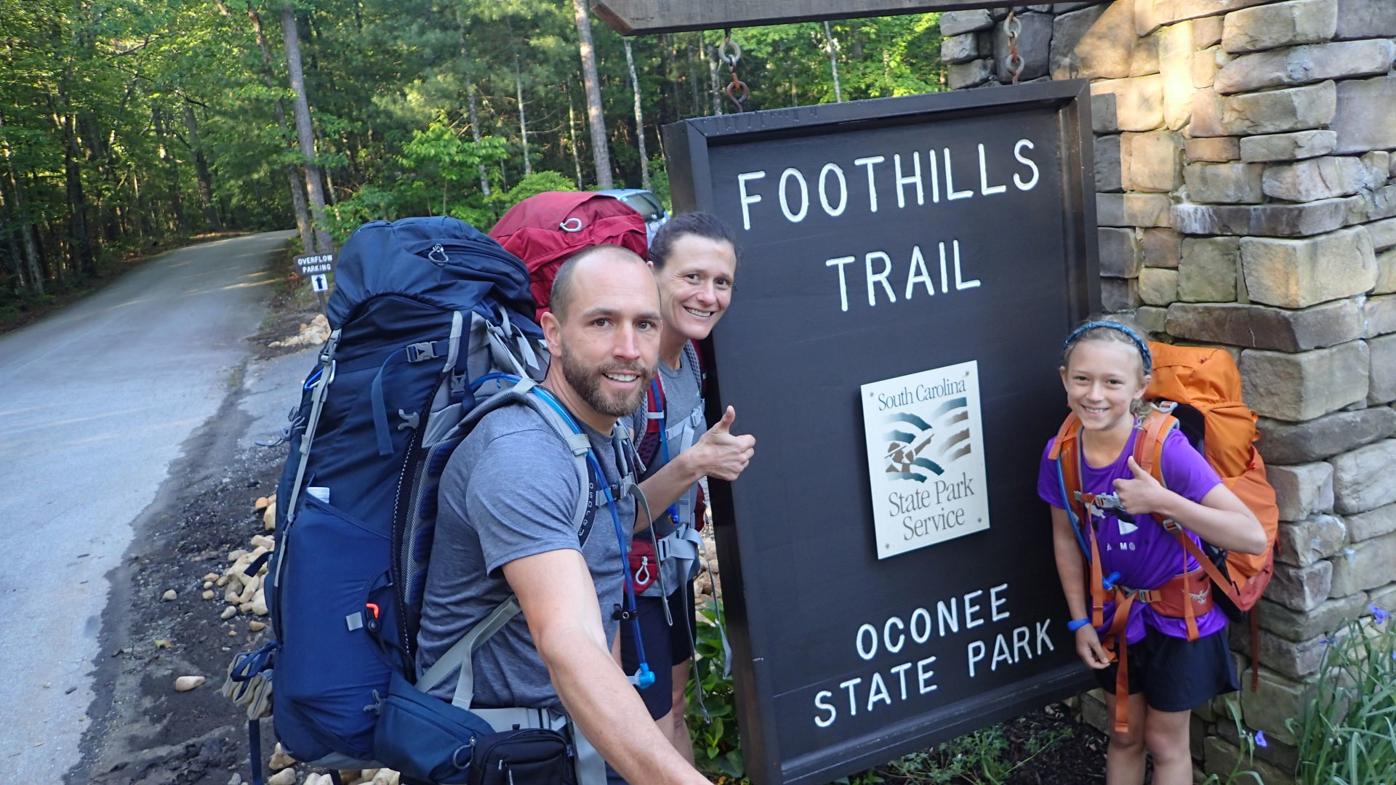 The Crawley family poses for a photo before the beginning of their nine-day hike on the Foothills Trail. From left to right is Ryan, Jenna and Ayla Crawley. 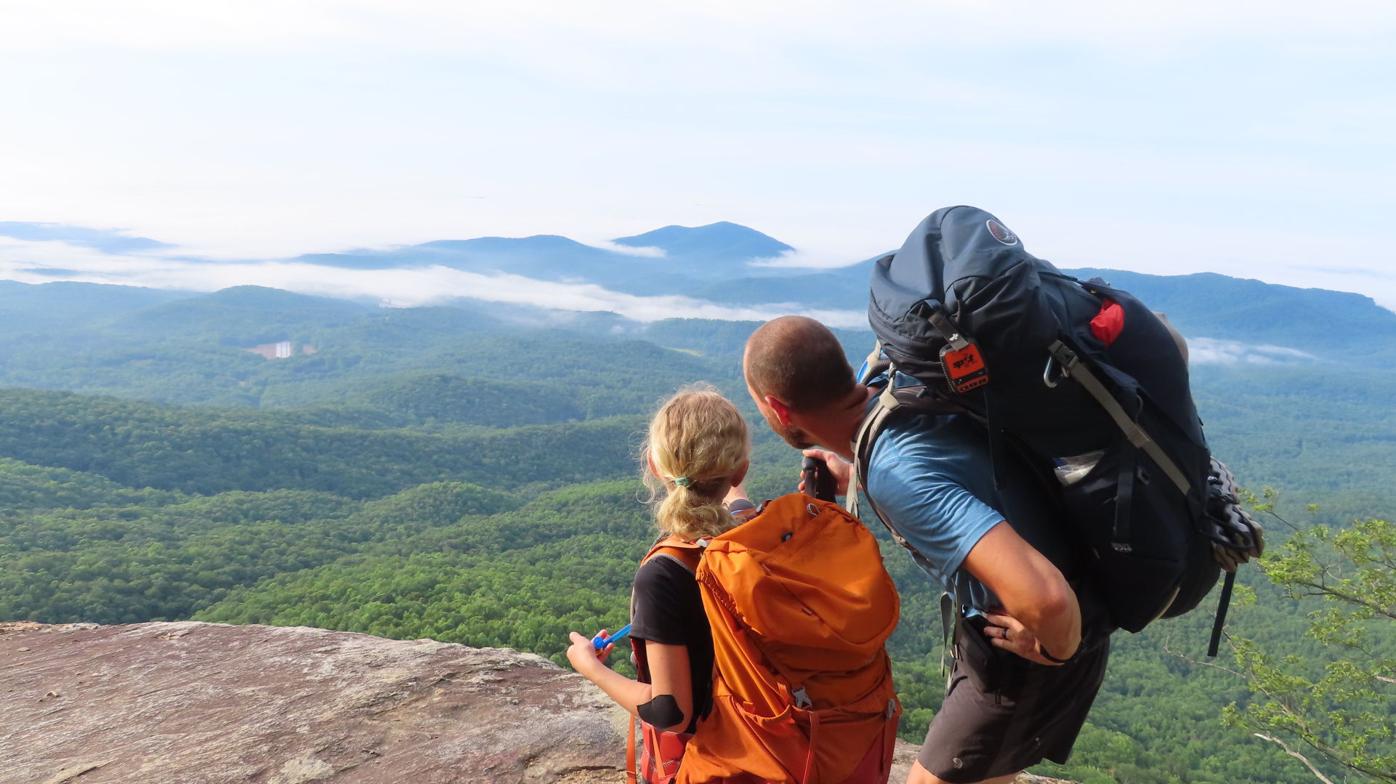 Ayla and Ryan Crawley take in the view on their last day of hiking the 76.2-mile Foothills Trail. 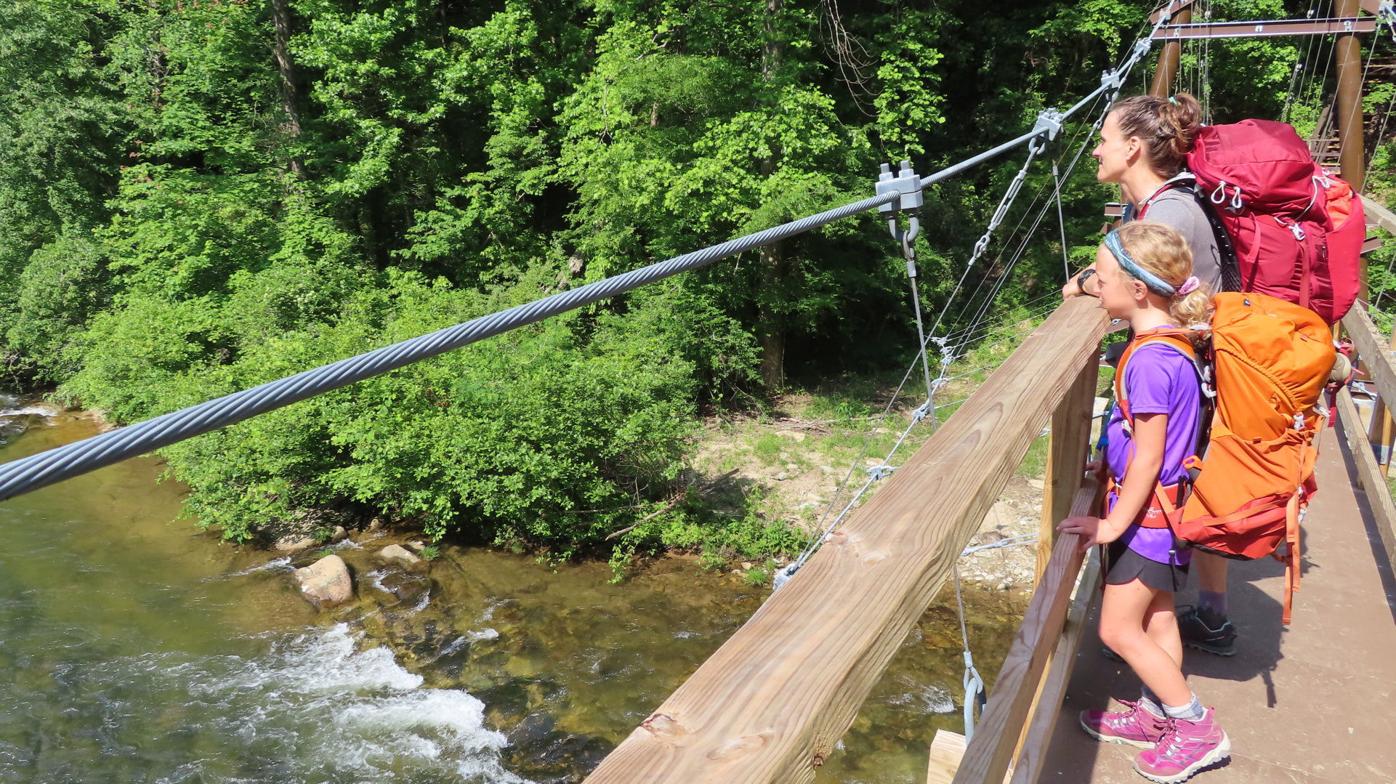 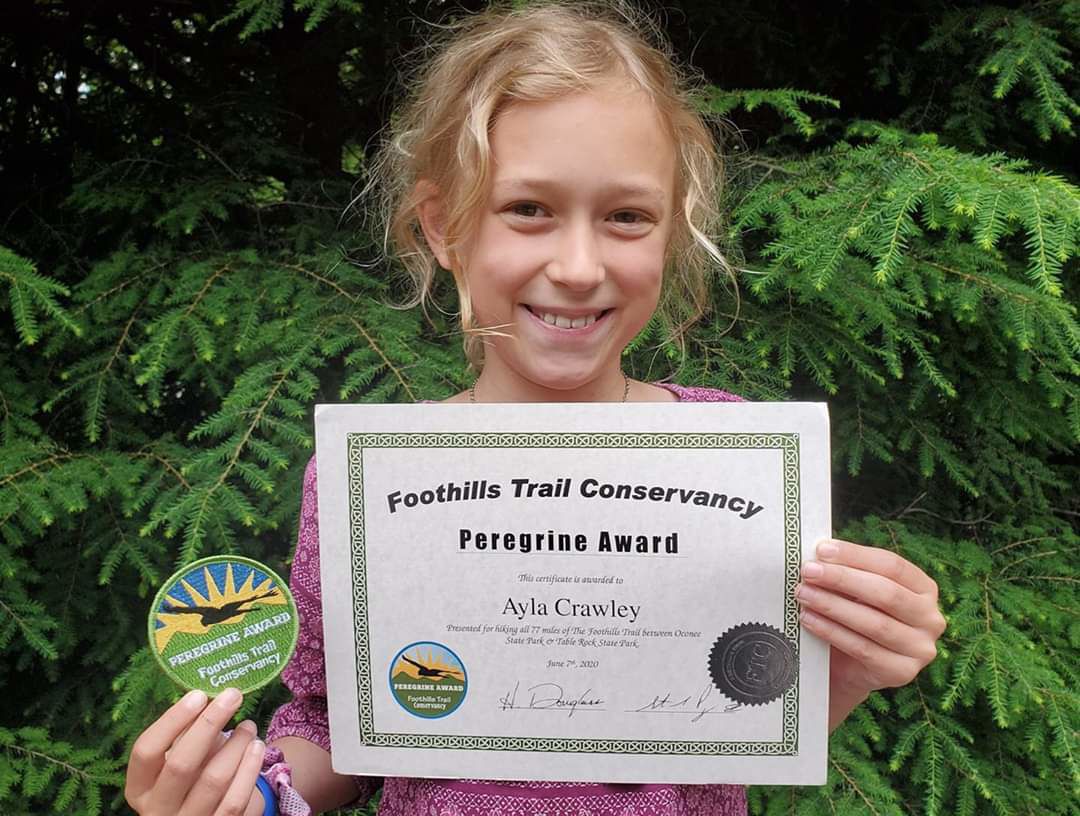 The Crawley family poses for a photo before the beginning of their nine-day hike on the Foothills Trail. From left to right is Ryan, Jenna and Ayla Crawley.

Ayla and Ryan Crawley take in the view on their last day of hiking the 76.2-mile Foothills Trail.

VALLE CRUCIS — After a cross-country trip and a vacation to Australia and New Zealand were canceled because of the COVID-19 pandemic, rising fourth-grader Ayla Crawley, age 8, took to the 76-mile Foothills Trail to have a summer adventure with her parents, Ryan and Jenna Crawley.

The idea of the hike came about in May as the family was searching for new summer plans and found that the Foothills Trail was still open for recreation, while other trails, including the Appalachian Trail at the time, had been closed due to COVID-19.

Ayla’s mother, Jenna, said that the 8-year-old has “hiking in her genetics,” as both Jenna and Ryan have several years’ experience working at a wilderness school and are experienced hikers.

While the trip took months to plan, Jenna said that planning ahead for the time they would spend on the trail, which included storing food drops and hiking before the summer sun got too hot, made the trip better. Through the process of planning the trip and being on the trail, Ayla, who is also a student at Valle Crucis School, learned to read trail maps, how to calculate daily mileage and about necessary hiking gear.

Jenna said that she and Ryan carried packs weighing 40-45 pounds, with Ayla’s being lighter at 13-14 pounds.

“We wanted this trip to be fun and relaxing, as well, so we took an approach that included bringing things that were going to provide comfort,” said Ryan. “Our (Jenna’s and Ryan’s) packs were heavier as a result, but it was totally worth it. Our motto was ‘smiles, not miles.’”

“We got out of our campsites really early, so we could hike in the morning when it was cooler,” said Jenna, noting that sometimes the family had traveled its eight miles for the day before noon.

Food drops were planned ahead of time and stored off of the trail’s parking lot areas in buckets so that the family only had to carry 3-4 days’ worth of food at a time.

During its nine-day trek, the family had minimal screen time — both parents carried their cell phone in case of an emergency, only checking the weather twice, according to Jenna.

“It felt amazing to turn everything off and to completely unplug from everything technology related for those nine days,” Jenna said. “We really learned to just be present with what was around us and with each other. I watched my daughter studying butterflies, salamanders, snails and the way that water moves with such beautiful intensity and curiosity. I think that each of us remembered how to really take notice of these tiny, amazing moments in nature because we had the space to do so.”

Upon the completion of the nine-day hike, Ayla was awarded the Peregrine Award for successfully hiking the entire trail. The Peregrine Award was started in 2011 and is awarded by the Foothills Trail Conservancy to hikers who complete the trail, in either sessions or all at once.

Jenna said that the biggest health scare that the family experienced was Ayla’s legs getting covered in mosquito bites.

“The mosquitoes really went after her,” Jenna said. “I had one of those moments late at night where I was worried they were really going to have a significant impact on the outcome of the trip.”

According to Jenna, it was Ayla who came up with the ultimate solution of using KT Tape and duct tape on the bites to keep them from itching and to prevent her from scratching them.

While the trail wasn’t particularly crowded while the Crawleys were hiking it, Ayla became “a bit of a legend for those two weeks,” her parents said, since she was the youngest person on the trail.

Since the hike ended, Jenna said, the family has stayed in contact with a few of the people they met on the trail, and from that, they have heard how others continued to talk about the 8-year-old girl who was “thru-hiking” the trail.

Ayla said that while she didn’t understand just how long 77 miles was at the beginning of the journey, “it was actually really fun, especially because it was eight-mile days.”

“My trail name was ‘Skittles,’ mom’s was ‘Chipmunk’ and dad’s was ‘Storyteller’ because he tells a lot of stories while we’re hiking,” Ayla said. “Mine was ‘Skittles’ because when we were going up hills I would eat Skittles and Twix because they give you motivation.”