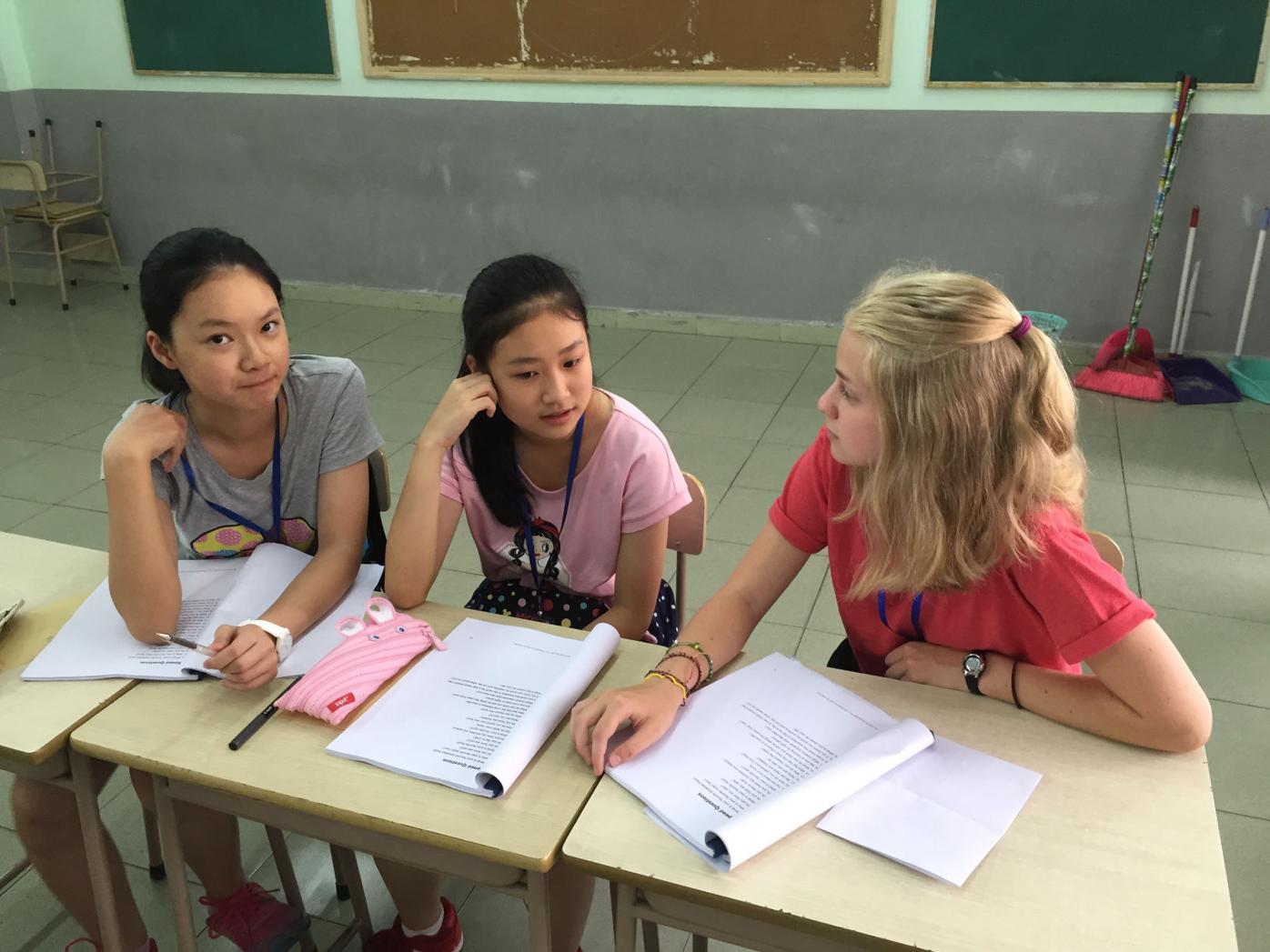 Representing Mount Vernon Baptist’s youth group in East Asia during the summer, Grace Fowler of Boone, at right, teaches English to two young students with a desire to learn the language. 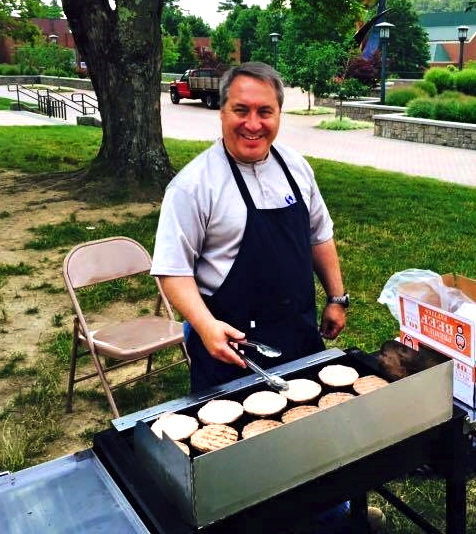 Chris Hughes gives of his time to cook more than 80 hot dogs and 40 hamburgers, during an outreach event on the campus of Appalachian State University during summer session. 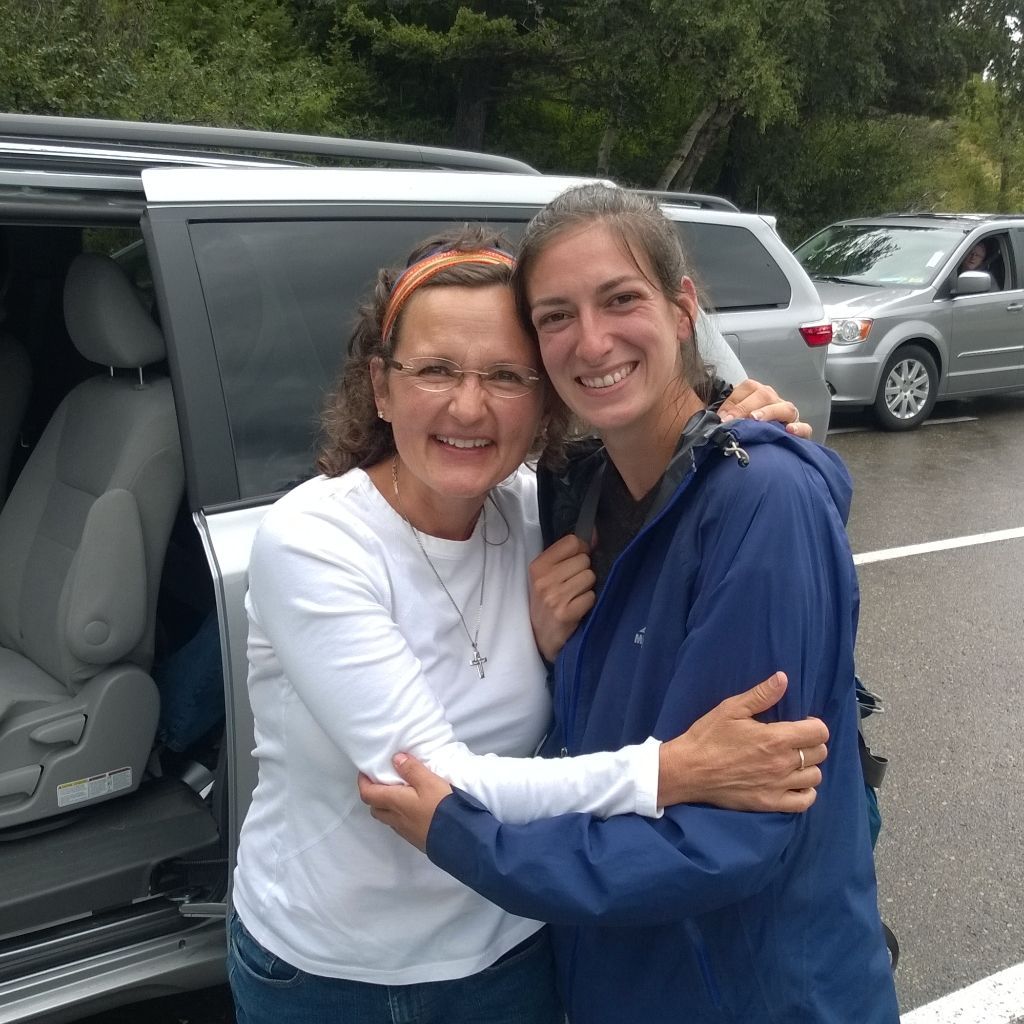 In Calgary, Deniece Smith, left, shares the love of Jesus with Victoria, a hitchhiker the group drove from a park area into town. 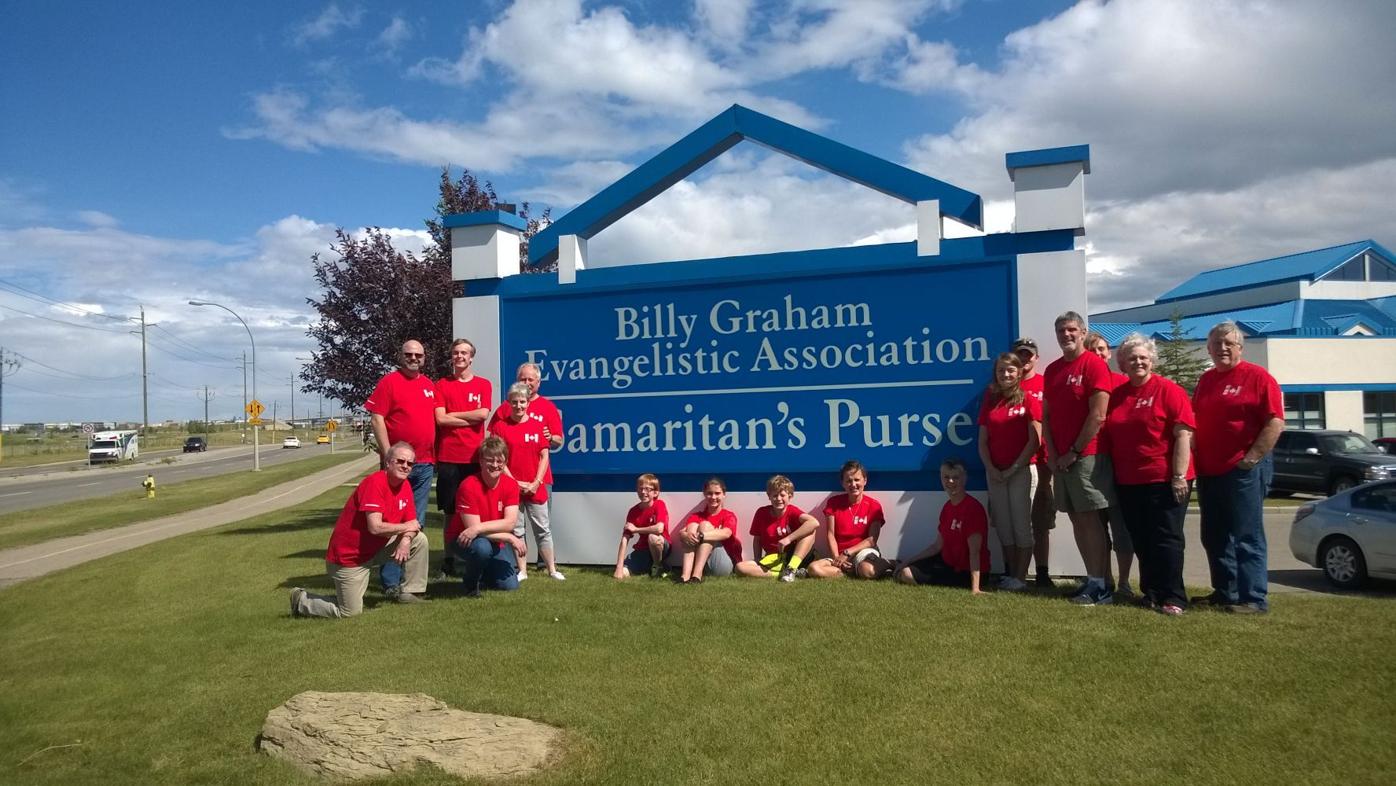 Representing Mount Vernon Baptist’s youth group in East Asia during the summer, Grace Fowler of Boone, at right, teaches English to two young students with a desire to learn the language.

Chris Hughes gives of his time to cook more than 80 hot dogs and 40 hamburgers, during an outreach event on the campus of Appalachian State University during summer session.

In Calgary, Deniece Smith, left, shares the love of Jesus with Victoria, a hitchhiker the group drove from a park area into town.

At Mount Vernon Baptist Church in Boone, an emphasis has recently been placed upon three simple, yet profound words: reach, teach and release.

In reaching out to others and teaching — sharing the word of God — the church knows it must also release believers to go into the mission field.

This past summer, Mount Vernon “released” numerous individuals and teams to go into the local community, as well as into the surrounding regions and several far-reaching corners of the world to show the love of Jesus Christ to others.

Following are just a few of the many ways the Boone church has reached out during recent months. Not included in this summer missions review are the numerous on-campus opportunities the church provides, such as its EQUIP recreation ministry for area youngsters, its senior adult ministry, Hispanic ministry and many others.

A positive example usually starts at the top and it does at Mount Vernon.

Senior pastor Greg Heisler spent his summer vacation in Kenya, “blessed,” he said, to have had the opportunity to travel to Kenya with the ministry known as Echoes of Mercy.

“This ministry is all about planting churches, equipping pastors, building schools and orphanages and reaching their communities for Jesus Christ,” Heisler said.

While in Kenya, he was able to speak at a school during school hours.

“They stopped school and more than 200 students were brought out in an assembly to hear the gospel and to worship through song,” he said. “I was also given the opportunity to train, equip and encourage more than 60 pastors — which is one of the passions that God has put on my heart.”

Most of the attending pastors had never been to college or seminary, he said.

A special highlight of his experience, “one that pulled at my heart strings,” Heisler described, was the time he spent in the local orphanages.

“There were so many children who had lost their parents to AIDS, or something equally tragic,” he said. “Mount Vernon is now sponsoring most of these children and I hope to have the opportunity to go back to Kenya, to continue to support this amazing ministry.”

To Asia with English

It is the goal of the youth ministry at Mount Vernon to let Christ be known in all that they do.

“Here, we call that process ‘radiate,’” said youth pastor Jason Powers. “Through our words and actions as teenagers and through our preaching and events in youth, we choose to radiate the character of Christ in the world he has placed us in.”

This summer, Powers led his group of 15 on a return trip to East Asia where they had previously ministered and were warmly received. Once again, they taught the English language at a local school and had several opportunities to witness and share the gospel.

They were able to see eight individuals profess their faith in Jesus Christ this year and are anticipating what yet another visit will mean to the friends they have made in that country.

VBS with a twist

As is traditional in most churches, Mount Vernon has, for many years, conducted Vacation Bible School on its campus with upward of 300 children in attendance.

However, in June, the church hosted Highway 58 Kids Bible Club — God’s Epic Stories during a four-day period with three-hour sessions, at various sites across the community.

It was described as one of the best VBS events ever, and one that attracted many children to a less informal setting and, in some cases, in or near their own neighborhoods, which alleviated the need for transportation. It was also one in which many young lives were led to the Lord, church officials said.

During the summer, 17 church members went to Calgary, Canada, to share the love of Jesus in an area known to be difficult for those wishing to minister.

The trip was a success in encouraging two church planters, John Hatch and Chris Ney, with the North American Mission Board of the Southern Baptist Convention.

The trip itself was wrought with spiritual warfare, which is a sign that the message is getting through, participants said.

The group had the chance to witness to several people, including Victoria, who was hitchhiking across Canada.

Deniece Smith shared Jesus with her as the group members drove her from a park area into town.

Hatch will be participating in the Active Intentional Missions Conference at Mount Vernon on Nov. 8 to share how the Lord is moving among the First Nations peoples of Morley, Canada.

While there, the Boone group had a special guided tour of the Billy Graham Evangelistic Association/Samaritan’s Purse Calgary Office, where they learned how Samaritan’s Purse responds to disaster relief there, as well as the collection of Operation Christmas Child shoeboxes.

Two times a month during the summer, an average of six to eight people each time, walked around the Boone area, with a focused circuit upon the ASU campus.

The intent was to have a members prayer walk and seek the Lord for his touch upon the college campus.

The results were great, the group reported, as they recognized the great need for Jesus among ASU students, while at the same time, helping them to consider how they could better reach students with the gospel during the school year.

During the second summer session at ASU, a team of folks from Mount Vernon was on campus to assist Baptist Campus Ministries of the High Country with a student outreach opportunity, Millennial Link, complete with door prizes and food.

Among the 25 members from Mount Vernon who helped with the event was Chris Hughes (Salvation Ministries), who cooked more than 80 hot dogs and 40 hamburgers, which disappeared quickly.

Another member, Roman Gabriel III, president of Sold Out Ministries, proved to be a great encourager to the students.

The response was positive with many students expressing their gratitude and some curious as to why the event was offered, participants said.

The answer to one particular student was simple: “Because we love Jesus and we want you to know we love you, too.”

The effort is something for which the center’s office manager, Molly Petrey, expressed appreciation, as it provided an opportunity to start the next semester off with a clean facility.

Hope Pregnancy Center is supported financially by Mount Vernon, which participates in special events for the center’s Hope Campaign.

Mount Vernon believes in the mission of the center to help unwed mothers in need of support and comfort for them and their unborn child.

This summer, Mount Vernon challenged its men to help with community building projects and gave them the opportunity to choose between 15 projects at a men’s breakfast in August.

Representing Resort Area Ministries, Mary Silver was present and gave a description of ongoing projects around the area that needed attention. Six of those projects are currently being completed and include floor and carpet replacements, appliance repairs and cabinetry.

The men have expressed their joy at being able to help with the needs, grateful, they say, for the opportunity to provide for physical needs and share Jesus with folks along the way.

Summer is over, but the opportunities to be a part of a missions-minded church are year-round.