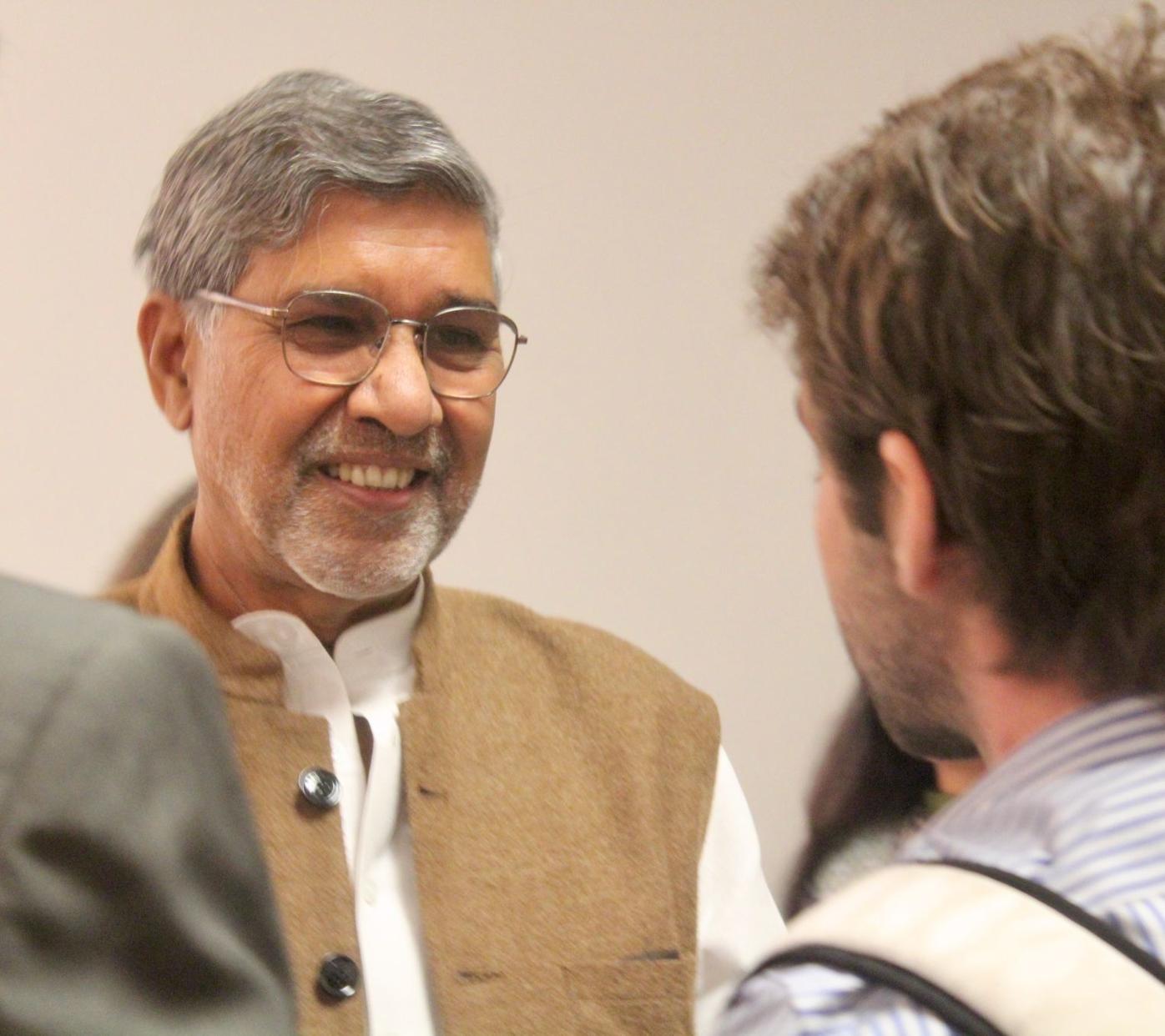 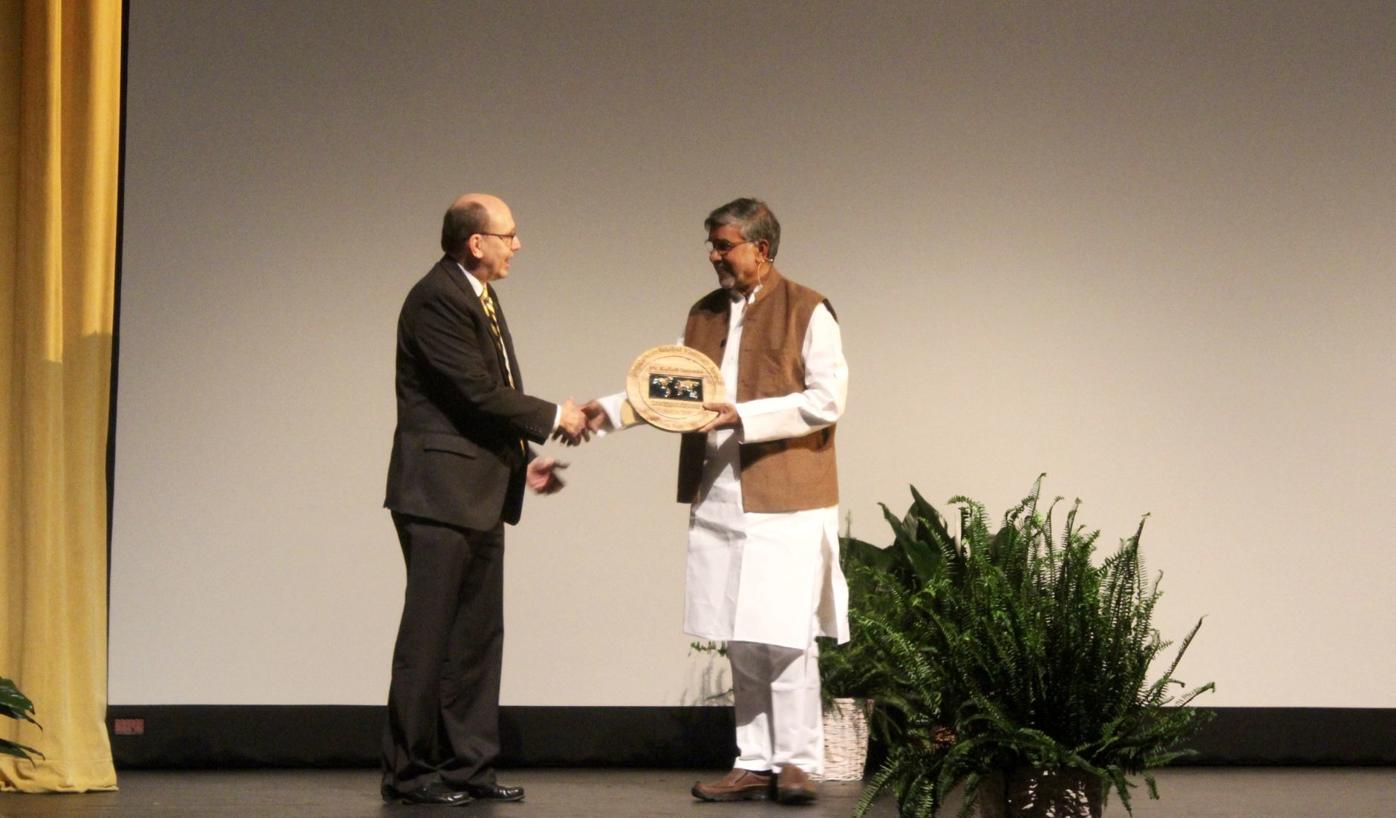 Marty Meznar, associate dean of Global and Civic Engagement in Appalachian State University’s College of Business, presents 2014 Nobel Peace Prize winner Kailash Satyarthi with ASU’s first Global Visionary Award. The award was presented to Satyarthi for his effort in his fight to protect children from child labor, enslavement and human trafficking, and his support of education for everyone. 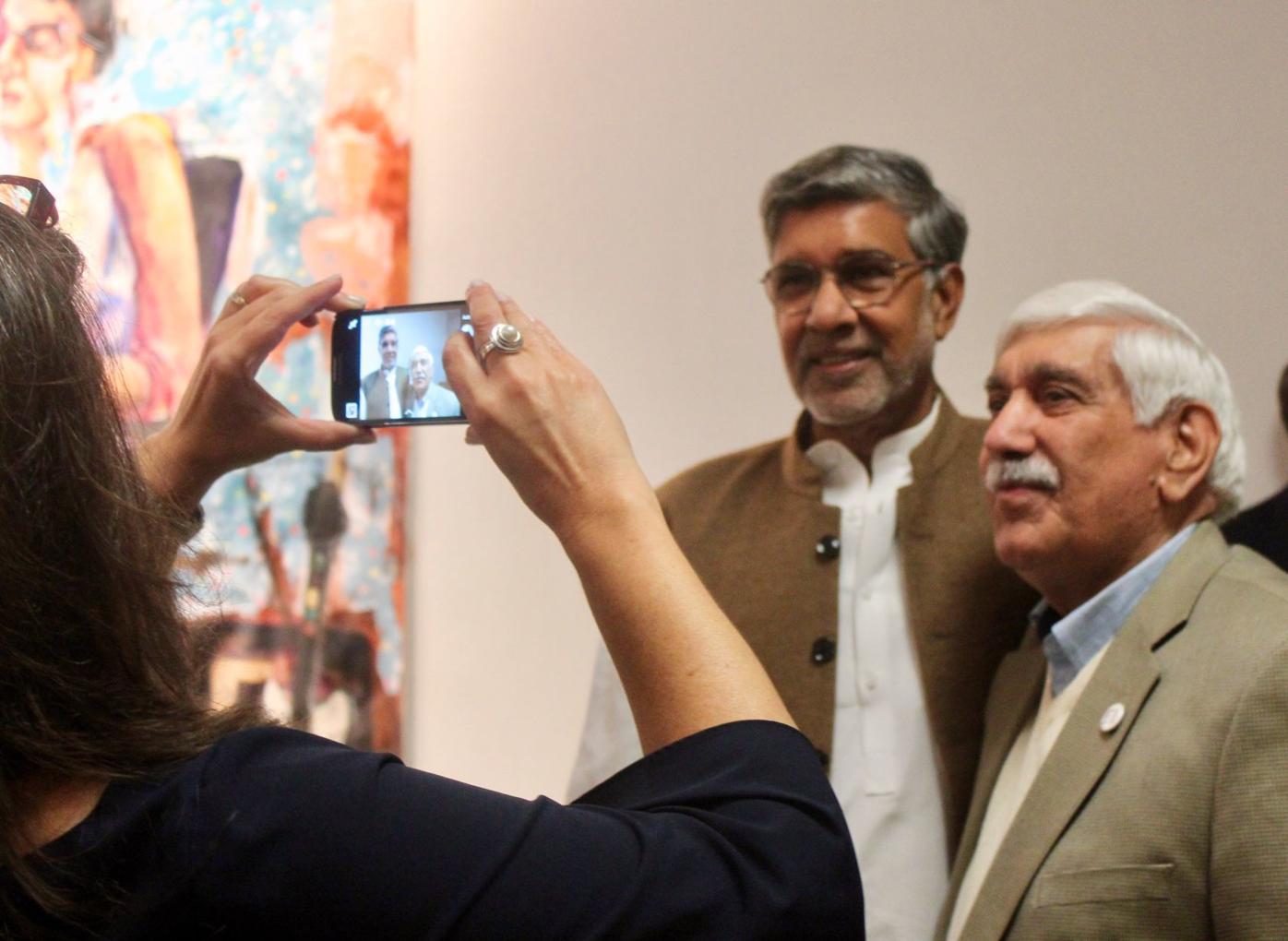 Marty Meznar, associate dean of Global and Civic Engagement in Appalachian State University’s College of Business, presents 2014 Nobel Peace Prize winner Kailash Satyarthi with ASU’s first Global Visionary Award. The award was presented to Satyarthi for his effort in his fight to protect children from child labor, enslavement and human trafficking, and his support of education for everyone.

BOONE — Nobel Laureate and child rights activist Kailash Satyarthi received more than 45,000 speaking invitations since he won the Nobel Peace Prize in 2014 (the same year as Malala Yousafzai) for his work to protect children around the world from human trafficking, enslavement and child labor, as well as his support of education for all.

Lucky for Appalachian State University, Satyarthi spoke to a full house at the Schaefer Center on April 26 as part of the Boyles Distinguished Lecture and Global Opportunities Conference. Satyarthi’s lecture, “Making Positive Changes in the World,” encouraged listeners to make the world a better place by searching for internal positivity.

“Everybody is born with this divine blessing of positivity,” Satyarthi said.

Satyarthi’s journey to protect child rights began when he was 5 and a half years old. He saw a “cobbler boy” sitting outside of the school gate, but the boy wasn’t attending school. The boy was working; not going to classes. Satyarthi recalled being upset at the thought of the boy not being in school because the boy was in a low caste in India’s caste system.

At the time, Satyarthi said he was too young to understand social hierarchy, but he felt something was wrong and began questioning everyone around him for validating the notion that some children don’t deserve education.

Young Satyarthi started to collect books, money and other educational supplies to give to children forced to leave school in his hometown.

Now, Satyarthi has protected more than 87,000 children from exploitation. He created the Kailash Satyarthi Children’s Foundation, an organization that strengthens governmental policy around children’s rights, inspires groups to free children from exploitation and promotes a “child-friendly environment.” Additionally, Satyarthi spearheads the 100 Million Campaign, which aims to inspire young people to be change-makers and protect their own rights and their peers’ rights.

“There is a hero inside you,” Satyarthi said. “There is a change-maker inside each of you.”

Satyarthi also spoke of converting anger into positive change, widening moral conscience and utilizing compassion to change the suffering of others. Through these mental shifts, Satyarthi found he was able to make a difference.

Satyarthi has been a member of a High Level Group formed by UNESCO on Education for All. Satyarthi has addressed the United Nations’ General Assembly, International Labour Conference, United Nations Human Rights Commission, UNESCO and several Parliamentary Hearings and Committees around the world.

He was honored by former President Bill Clinton for being featured in Kerry Kennedy’s book “Speak Truth to Power,” where his life and work was included among the Top 50 human rights defenders in the world including Nobel Laureates Archbishop Desmond Tutu, Elie Wessel, the Dalai Lama and more.

Lecture attendee Jennifer Bowman, an ASU alumna of Fort Mill, S.C., said that Satyarthi’s speech encouraged her to reconsider what she “walks past everyday” and to question her conditioned responses.

ASU student Ciara Fogarty honed in on Satyarthi’s advice to channel anger to make a change.

“You can turn your anger into something positive,” Fogarty said.