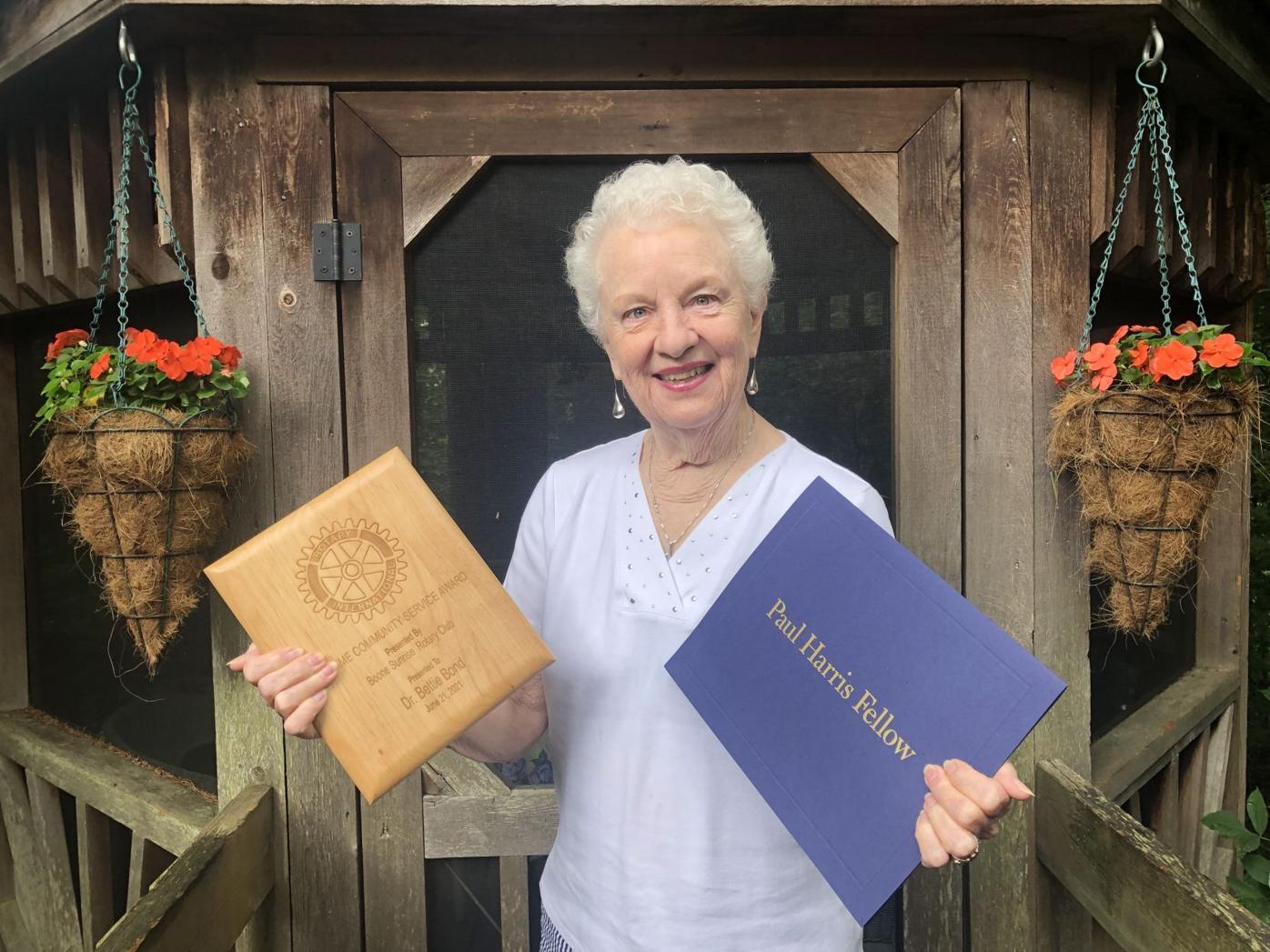 Bettie Bond is awarded the Lifetime Community Service Award by the Boone Sunrise Rotary Club and is also honored as a Paul Harris Fellow by the Rotary Foundation at a June 21 meeting of the club. 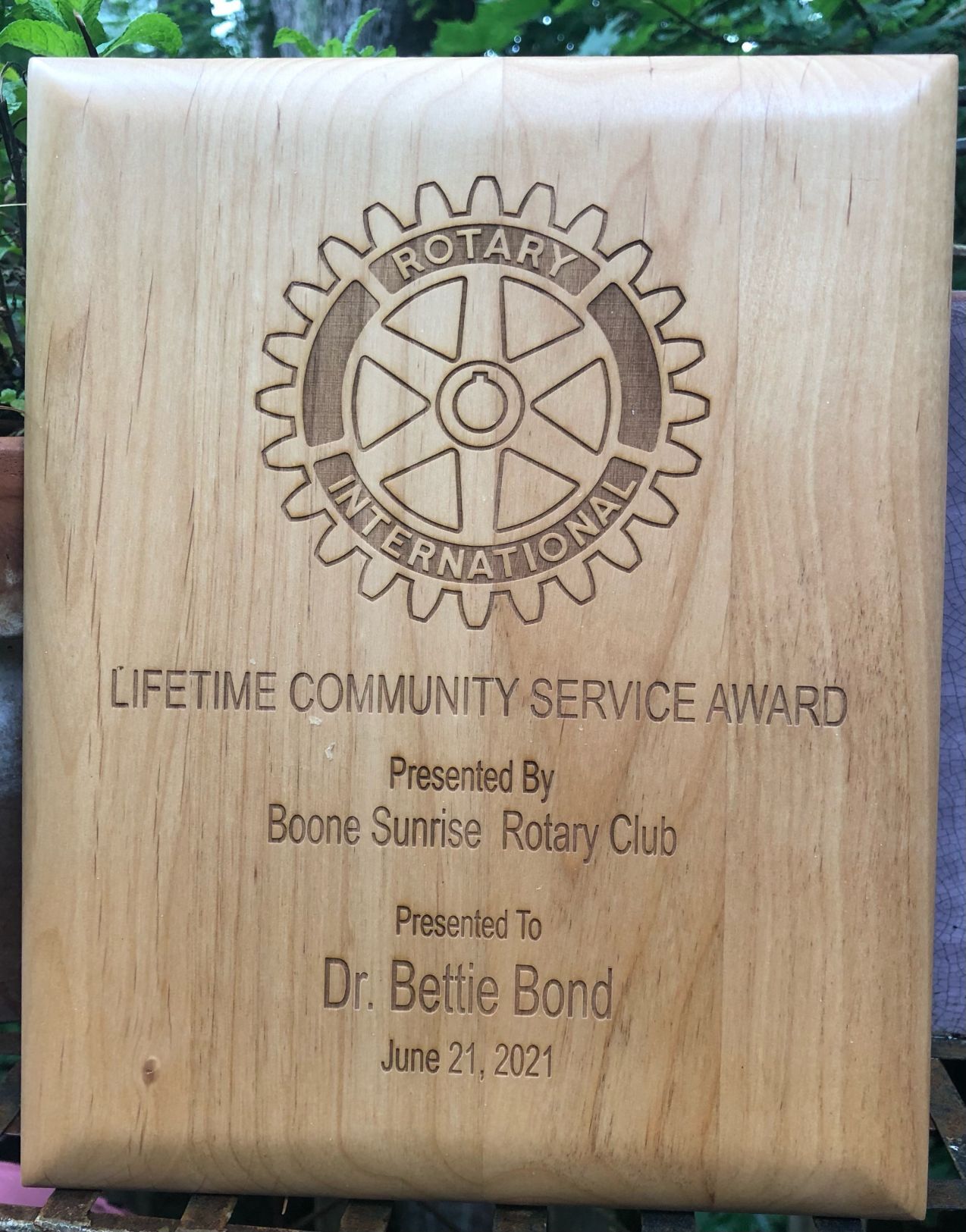 Bettie Bond is awarded the Lifetime Community Service Award by the Boone Sunrise Rotary Club — only the third time the award has been given out by the club.

Bettie Bond is awarded the Lifetime Community Service Award by the Boone Sunrise Rotary Club and is also honored as a Paul Harris Fellow by the Rotary Foundation at a June 21 meeting of the club.

Bettie Bond is awarded the Lifetime Community Service Award by the Boone Sunrise Rotary Club — only the third time the award has been given out by the club.

BOONE — An award that has only been given out twice since 1986 was recently presented for the third time to its first female recipient by the Boone Sunrise Rotary Club.

Longtime Boone resident Bettie Bond was honored with the Lifetime Community Service Award at the June 21 Rotary Club meeting at Booneshine Brewing Company, surrounded by familiar faces from her 50 years in Boone.

“I’m just really tickled,” Bond said. “The people that were there I just love. These were all people that I have worked with on different committees and had such good times with.”

Bond joked that because the award was given during the week of her and her husband’s 56th wedding anniversary, they gave the wrong person the award. She joked that it really should have gone to her husband, John James Bond.

Someone who overheard Bond say that joked that he deserved a Purple Heart instead.

“It’s been a real blessing,” Bond said. This is wonderful because this is community-based.”

Bond was also named a Paul Harris Fellow by the Rotary Foundation, which is the charitable arm of Rotary International. She was honored with that “in appreciation of the tangible and significant assistance given for the furtherance of better understanding and friendly relations among peoples of the world,” according to the award citation.

Bond first came to Boone with her husband in 1971 to join the faculty at Appalachian State. About 14 months later, they moved into the house they still live in nearly 50 years later.

During the years in Boone, Bond has served a variety of roles for the community. One of her current roles — of many — is on the board of the Appalachian Theatre.

“That has been just so much fun,” Bond said. “It’s been almost 10 years now. There’s not a week goes by that I’m not doing something.”

This past year, Bond said it’s been really crucial for the theater to keep going and remain engaged with the community during COVID-19.

“It would be so easy for us to just pull back and pray for the end, but instead we have kept our donors and our volunteers and the whole shebang engaged,” Bond said. “That’s really, really been important. We’ve kept that momentum.”

Bond is also president of the Watauga County Historical Society, which she said she has loved being a part of as she was in the history department when is a former faculty member of the Appalachian State University history department.

One of her favorite achievements with the historical society was helping create the Digital Watauga archive. The archive — a collaborative effort between the Watauga County Historical Society and the Watauga County Public Library to preserve and display the High Country’s archival memory — was started when a community member gifted more than 200 postcards about Boone.

Some of the postcards were on wood and dated back to the 19th century. When Bond saw the postcards, she didn’t know what to do with them right away, but worked alongside others and determined that the postcards should be digitized.

“But I said if we’re going to do it, we have to do it right because if we do it right, we are going to get a tsunami of material,” Bond said. “And that’s exactly what happened.”

Bond said the digital database — which can be found at digitalwatauga.org — now has nearly 30,000 images and about 20 collections in the queue.

Bond sees these boards as a vehicle to be a mentor and an example for other community members.

“The boards are the vehicle that you use to make those things happen,” Bond said. “I can’t ask people for money if I haven’t given myself. I can’t ask somebody to serve on a committee that I’m not going to serve on.”

Instead of a biography, Bond was honored at the June 21 meeting with a reading of a poem of her achievements. One of the stanzas read “She’s chaired the Heart Ball on countless occasions; ‘Horn in the West’’ and Boone Gardens add to her equation. The Humane Society and their Fur Ball, too, there’s simply no end to what this woman can do.”

For Bond, the Boone Sunrise Rotary Club telling her “thank you” for her service, it was the icing on the cake.

“Everyday in Boone is a bonus,” Bond said.