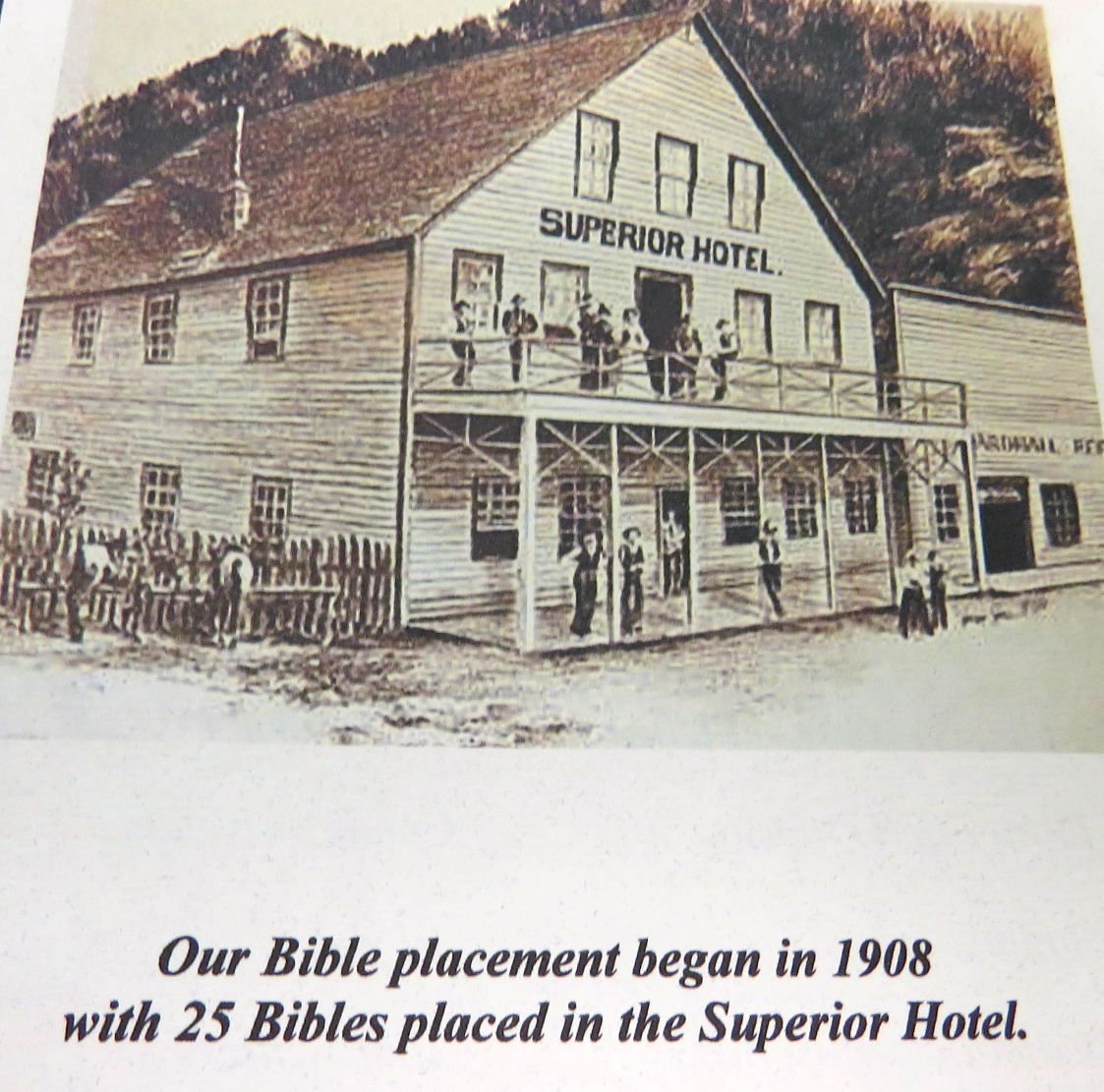 That first placement of a Gideon Bible was made by Archie Bailey, a regular guest at the Superior Hotel in Superior, Mont. After receiving permission from the hotel operator to place Bibles in rooms, he ordered 25 copies of God’s Word with the Gideon headquarters and covered the cost with a personal contribution. 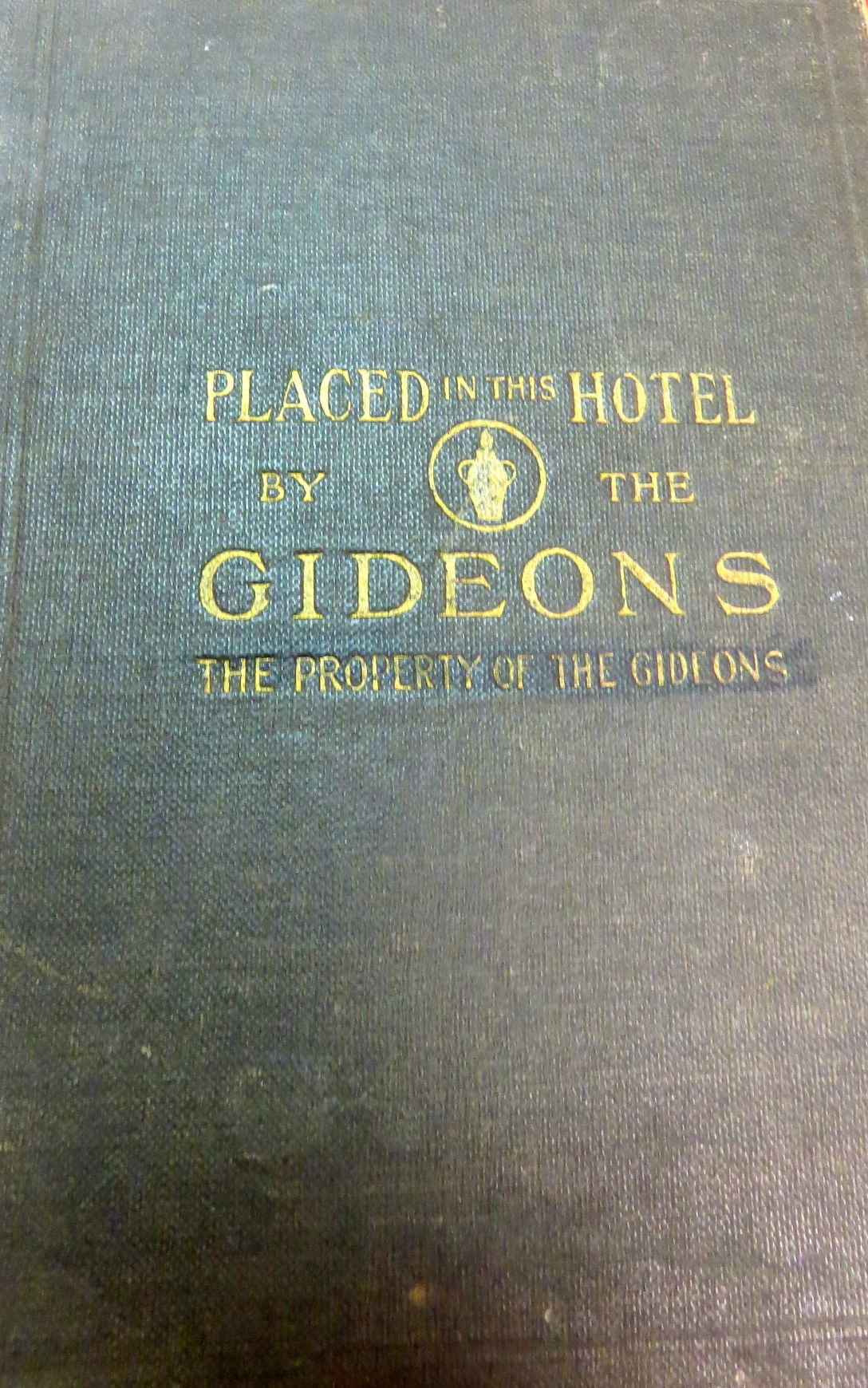 This Bible, once owned by John West, founder of Boone Camp, was among the first Gideon Bibles ever distributed by the organization. 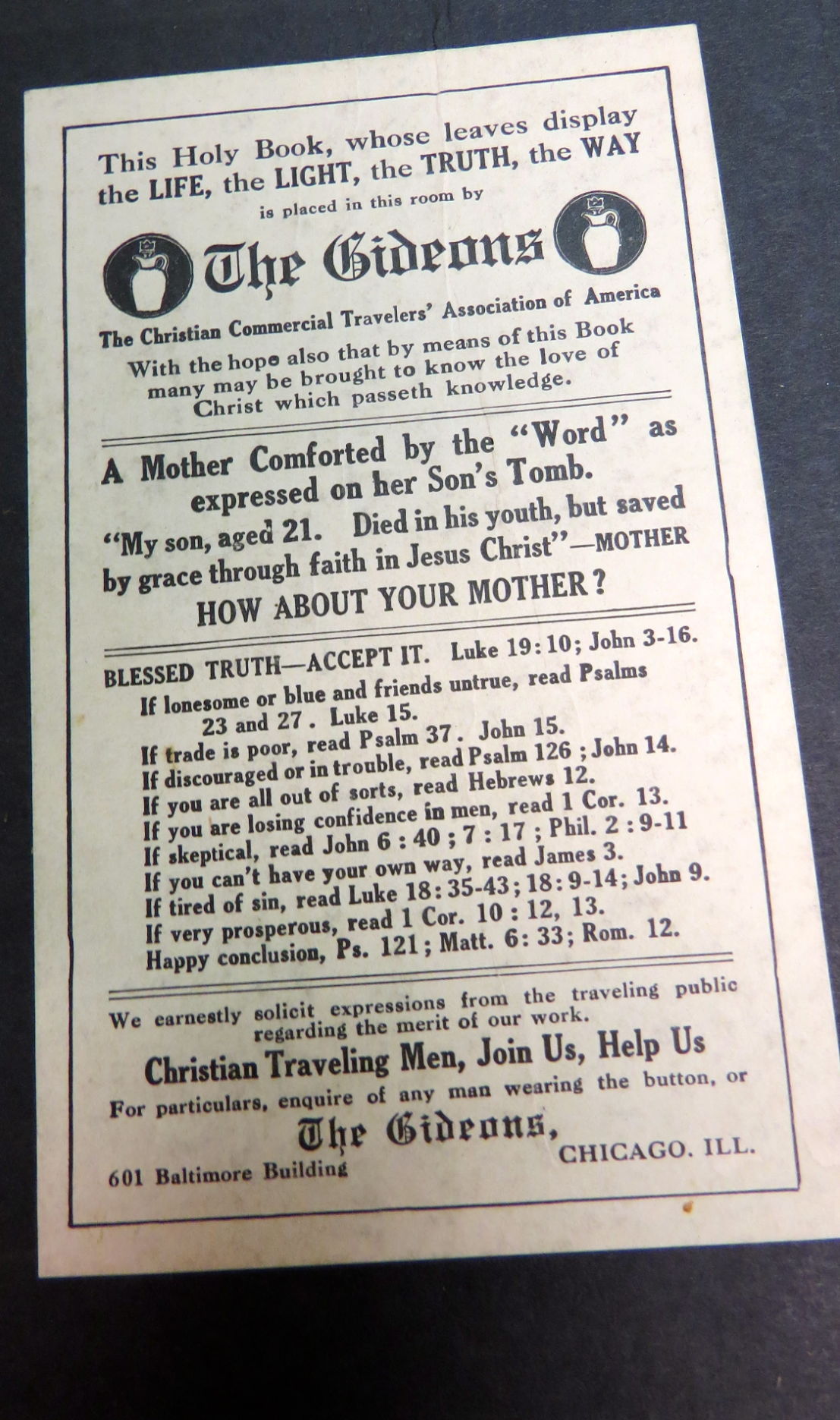 This message was included in some of the earlier Gideon Bibles, as found in the one owned by John West. 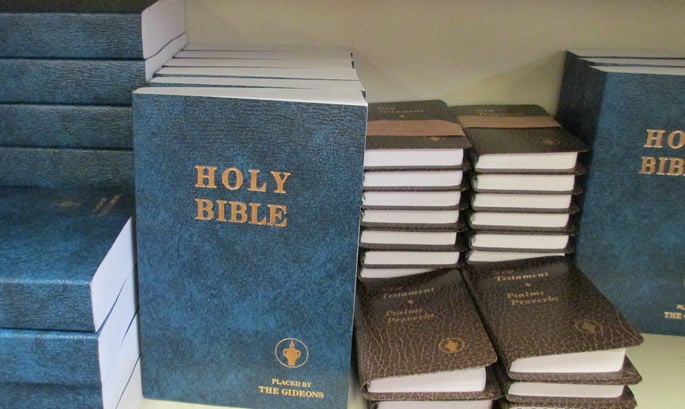 More than 2 billion copies of Scripture have now been placed around the world by the Gideons. 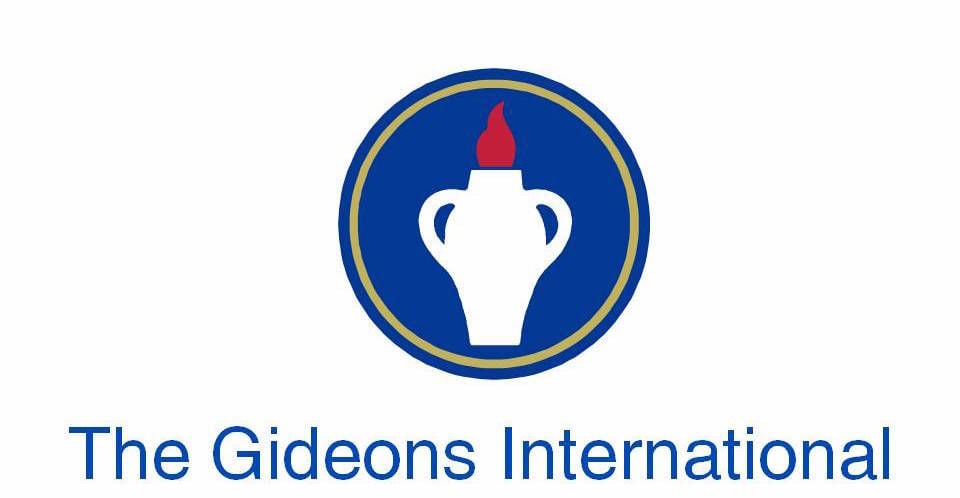 That first placement of a Gideon Bible was made by Archie Bailey, a regular guest at the Superior Hotel in Superior, Mont. After receiving permission from the hotel operator to place Bibles in rooms, he ordered 25 copies of God’s Word with the Gideon headquarters and covered the cost with a personal contribution.

This Bible, once owned by John West, founder of Boone Camp, was among the first Gideon Bibles ever distributed by the organization.

This message was included in some of the earlier Gideon Bibles, as found in the one owned by John West.

More than 2 billion copies of Scripture have now been placed around the world by the Gideons.

The Gideons International has reached a major milestone this year.

Since its formation in 1899 by two traveling salesmen and, more specifically, since it began distributing Bibles in 1908, the Christian-based ministry has provided 2 billion copies of Scripture around the world.

The Bible and New Testaments have been given out to hotels and motels, schools, colleges, prisons, hospitals, nursing homes, military facilities, doctor’s offices and fire stations — at no cost to the recipients.

Today, there are approximately 300,000 Gideon men and women auxiliary members in 195 countries who are distributing Bibles and New Testaments in more than 99 languages.

“It took the Gideons 93 years to distribute the first 1 billion Scriptures, and only 14 years to give out the second billion, from 2002-2115,” said longtime local Gideon, Boyden Atwood, of Boone. “That’s pretty impressive.”

The Gideons International, with headquarters in Nashville, Tenn., is an association of Christian business and professional men dedicated to distributing God’s Word around the world.

The auxiliary is comprised of Gideon wives who support the work with prayer and by participating in many of the organization’s functions, including the placement of Bibles.

To become a Gideon, a man must be in good standing in an evangelical or Protestant church.

Gideons are assigned to a local group called a “camp.”

Although not members of the clergy, Gideons represent local churches as missionaries, with the sole purpose of winning lost souls for Christ through providing them with the Word of God.

All donations to the organization go directly toward spreading the gospel, through purchasing, printing and transporting Bibles, often to countries where traditional missionaries cannot go.

The organization’s efforts are made possible through ongoing support of local churches and other donors.

The Boone Camp of the Gideons has been active since being organized in 1973 under the leadership of John West of the Zionville community.

An Indiana native deceased since 1999, West had retired earlier that year as deputy director (second in command) of the U.S. Department of Justice, Bureau of Alcohol, Tobacco and Firearms.

West and his wife, Zola Johnson West, settled in Watauga County to be near her aging parents in 1973.

West had become active in the Gideons in North Wilkesboro, soon after he and Zola were married in 1955, according to Zola.

He took an active role in the organization and held numerous offices, including state secretary, when they lived in South Carolina, and later, after moving to North Carolina, he became state president.

The couple moved a lot with his job, Zola said, from Washington, D.C., Boston, Atlanta and Nashville — and in each city John had active roles in the Gideons, through leadership and speaking in countless churches and at special events.

Zola joined the auxiliary, and 58 years later, is the area’s longest serving auxiliary member. She also served as scripture secretary in South Carolina.

Her husband helped establish the Boone Camp, Zola said, after he and Godron Finley went to hear a visiting Gideon speak about the organization.

There was only one other man in the area at the time who had been a Gideon, Zola said, but the local membership quickly grew.

Her husband loved the Gideon ministry, Zola said, adding, “Even when he got sick, he still participated as much as he could.”

She still helps with distribution of the testaments at the hospital.

“I lived in Tennessee at the time, but was visiting a church in Boone and heard Boyden Atwood speak,” Brown said. “I was so impressed that I joined the Gideons in Tennessee and when I moved to this area a year later, I joined the Boone Camp.”

Brown, who has served in various leadership capacities within the camp, said he feels compelled “to do whatever I can to lift up, praise and honor the name of Jesus Christ and to help spread the gospel message.”

Brown said he has a deep appreciation for the Gideons, because every penny donated to the ministry goes to purchase Bibles.

“As Gideons, we pay our dues, which helps with administrative costs, logistics and shipping of Bibles,” he said. “It’s completely different than any other ministry out there.”

Brown described the Boone camp as “a great group of people,” currently with 24 Gideons and 12 auxiliary members.

“We enjoy great fellowship together in our meetings and accomplish what we can to get Bibles distributed,” he said. “I want to continue serving until I can‘t serve anymore.”

Last year, members replaced 300-plus Bibles in local hotels and distributed nearly 3,000 New Testaments to area young people, despite not being allowed in the county schools for more than 20 years.

They also gave out more than 300 testaments as part of their personal witness to individuals they met along the way.

Each year, the Boone camp hosts an appreciation dinner for pastors and their spouses; the most recent was held Aug. 7 at Mount Vernon Baptist Church, with about 75 in attendance.

Hayes, the last surviving charter member and current treasurer, has served in numerous capacities through the years.

His wife, Betty, has been involved for the same amount of time.

Hayes called his participation “fulfilling,” from helping to raise funds to buy the Scriptures, to the actual distribution.

“It’s always been a pleasure to go out and put the Bibles in the hotels,” Hayes said. “You never know who might come along, open one up and be saved because of what they read.”

Atwood, a Gideon for 33 years, remains enthusiastic about his service.

“Things are still going well. Our church services and offerings are up, as are our Gideon cards,” he said.

He explained the cards as those given in memory or honor of someone, or to recognize a special occasion.

“We have a real good time together doing the Lord’s work,” Atwood said. “We pay our own way and every dime given to the Gideons goes to buy Bibles.”

The Bibles and testaments are printed in the countries in which they are distributed, which, Atwood said, saves thousands of shipping dollars.

The Gideons remain humble servants of the Lord.

Atwood said, “It’s about doing for him, it’s not about us. We don’t go looking for publicity.”

Atwood and his wife, Gelene, joined the ministry in 1982.

Those wishing to provide Gideon cards to their congregation, as a way to acknowledge gifts made to the organization in honor or memory of someone, or to otherwise recognize an individual, may request same by calling Carl Johnson at (828) 355-

The Boone camp meets on the second Tuesday of each moth at Sagebrush Steakhouse in Boone to discuss distributions, church services and new member recruitment.

“We are always open to new members and especially young men who can help carry this on when we are gone,” Atwood said.

For more information about the Gideons, including their doctrinal statement, visit www.gideons.org.

Carl Johnson contributed to this story.