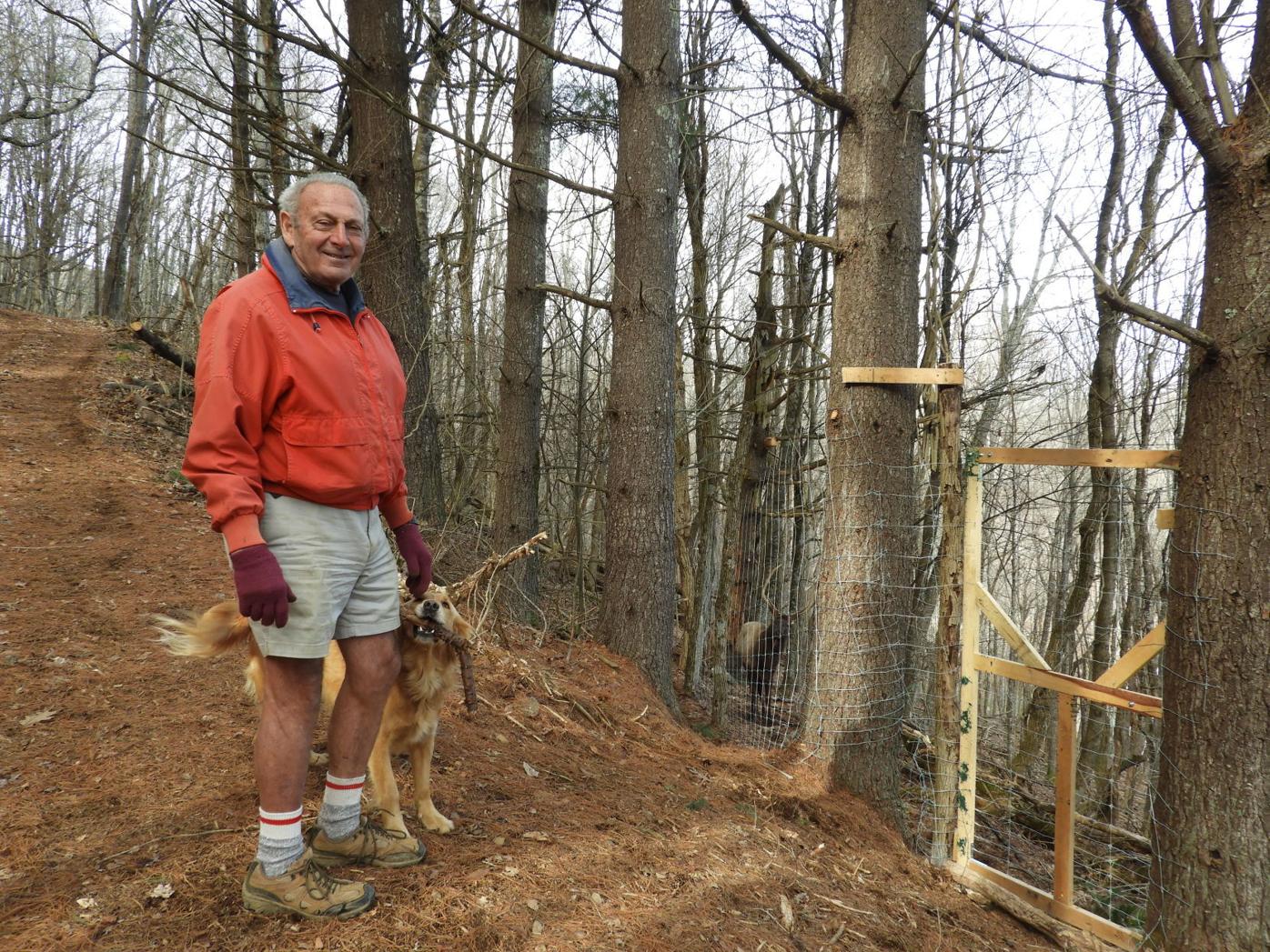 Bert Valery and his dog pose in front of Braveheart, which is Valery’s first elk at Sweetwater Ranch. 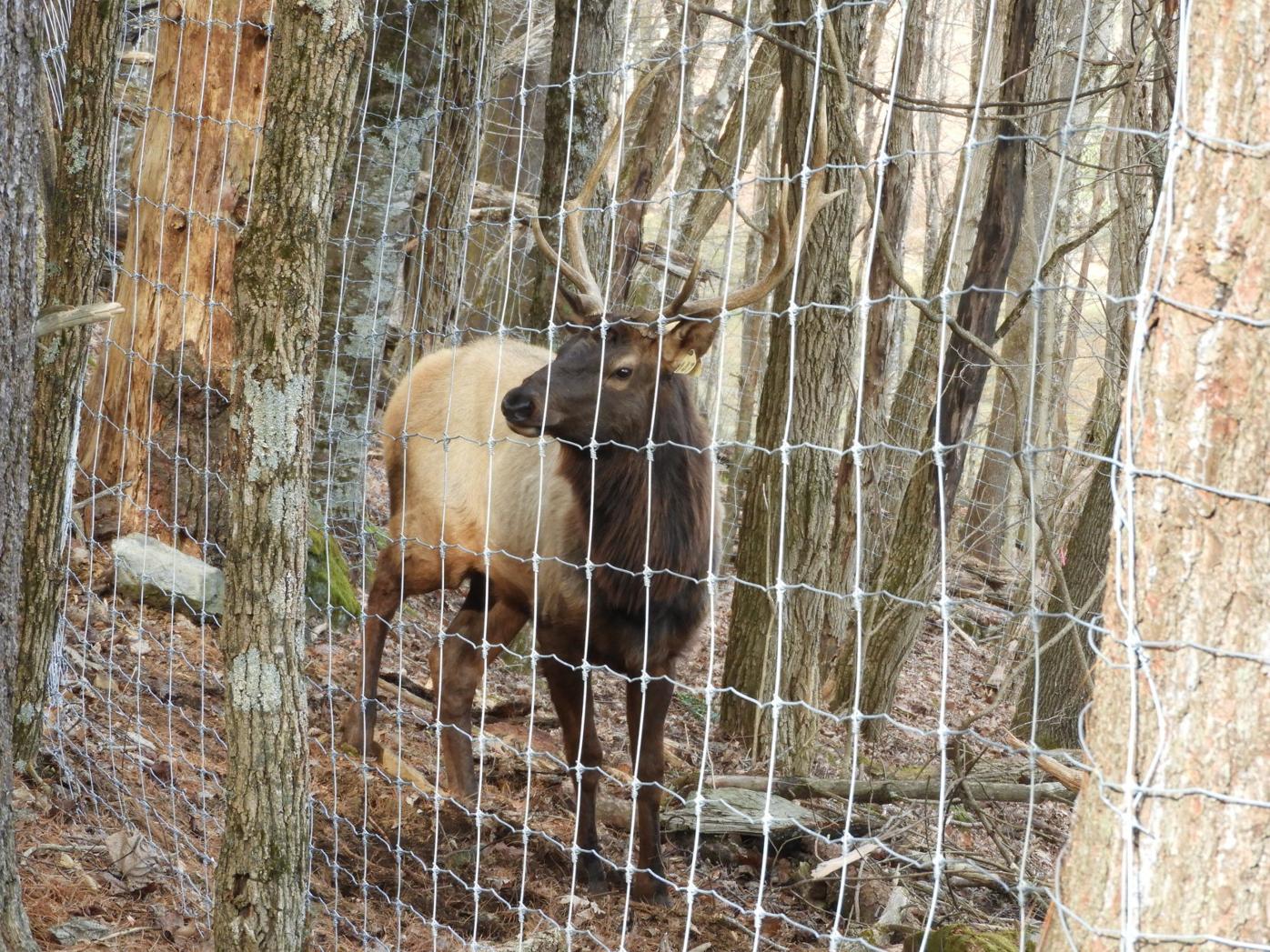 Braveheart, a 3-year-old elk, is Sweetwater Ranch’s first, and will eventually be a part of a herd.

Bert Valery and his dog pose in front of Braveheart, which is Valery’s first elk at Sweetwater Ranch.

Braveheart, a 3-year-old elk, is Sweetwater Ranch’s first, and will eventually be a part of a herd.

NEWLAND — The bellowing call of elk can once again be heard resonating over the hillsides in Newland. On Monday, Dec. 23, Bert Valery, owner of Sweetwater Ranch, introduced Braveheart, a three-year-old male elk, to the property with the intent of having the young elk be the first in what will eventually be a herd of elk.

Valery purchased the 60-acre property, or what would become Sweetwater Ranch, in Newland last fall. The idea to begin the herd is the culmination of trips to Avery County which he and his wife Donna began taking in the 1980s, as well as excursions to Jackson Hole, Wyoming to visit the National Elk Refuge.

The NER rests between Yellowstone National Park and the city of Jackson, Wyo., where the U.S. Fish and Wildlife Service feed and manage approximately 10,000 or so elk that migrate to the lower elevations during the wintertime.

“It’s just wild,” Valery said of the NER. “We really became enthralled (with the refuge). Out there, they have no fences in Wyoming. They have buffalo all over the place, elk all over the place. You have all of these big animals. It’s really exciting. If you’ve never been there, it’s like these African safaris where you see the migrations. The elk are migrating down from the mountains. The buffalo are migrating down from the mountains. So we looked at this thing, and we thought we could do something like that. It was really a neat thing.”

While wild elk populations continue to roam freely in the western regions of North America, eastern elk disappeared from North Carolina in the 1790s — and became extinct elsewhere along the East Coast by the 19th century — due to overhunting. As many locals know, elk were prominent in Avery County, hence the names of areas such as Banner Elk, Elk Park and Elk River, among others.

“The idea is, or why we’re doing this, is to reintroduce elk into the wild of North Carolina. There were wild elk in all 48 states, but they were gradually hunted out,” Valery said. “This area was the capital of the world where you would have elk in the 1700s and even the 1800s. Now there are none. So I thought it would be really nice to be able to reintroduce them and not have them available for hunting.”

The releasing of the elk into the wilds of Avery and Watauga counties, or even other regions of the High Country, is the long-term goal for Valery and his herd. Similar efforts were taken up successfully by the National Park Service in the Cataloochee Valley in the Great Smoky Mountains in 2001. Free-range elk have also been reintroduced in Kentucky, Virginia, Pennsylvania, Tennessee, Michigan, Arkansas and Wisconsin through the efforts of the Rocky Mountain Elk Foundation, wildlife agencies and hunters with a passion for conservation.

Elk have also spread into West Virginia, and even the National Park Service’s own herd of about 200 elk in N.C. have reportedly been sighted roaming in the mountains of western South Carolina. However, for Valery it will likely take several years for his elk herd to become large enough before the process of reintroducing them into the wild is a possibility.

Valery’s career working in the insurance industry in Clearwater, Fla., proved successful enough to allow him and his wife the opportunity to pursue their conservation efforts. Five years ago, they moved into a house in the Seven Devils community and were able purchase the farm in Newland after four years of searching.

Much of the time spent preparing for the arrival of their first elk involved building the mandatory 8-foot fence as laid out by North Carolina law. Valery began working on the fence single-handedly in March before eventually hiring a skillful ranch hand. After the fence was inspected and approved, Valery purchased Braveheart from an elk dealer in Salisbury, since it is illegal to sell and purchase elk across state lines. The female elk is expected to arrive by the Spring.

“We have one male in here now. The idea is to pick up one or two more females in the spring, or as soon as they become available. They should mate in rut, which is in the fall. Then we would have our first births next spring. Unlike deer, which typically birth twins, elk birth one,” Valery said.

As the elk continue to arrive to the ranch, additional fencing and changes to the property will be required in order to keep the elk separated as mating season, or the time of year when the elk are in rut, comes and goes.

“The internal operation of building some more fenced-in pens for the separation of the male and the females during rut (will be needed),” Valery said. “Let’s say next spring’s birth happens to be two males. That would mean I could have two female mothers and three males. (The big guy) would be a danger to the babies in the fall during rut, because he doesn’t want any other males in the area. That’s when you’re out West and you hear the bellowing, what they call bugling, then the smashing. We have to build other pens in order to keep the males separated.”

Eventually releasing the elk will require some sort of partnership with the state of North Carolina. However, before something of the sort could begin, significant time will be needed for Valery’s herd to grow.

“The way I foresee it for the next five years, all we will be doing is growing a herd,” Valery said.