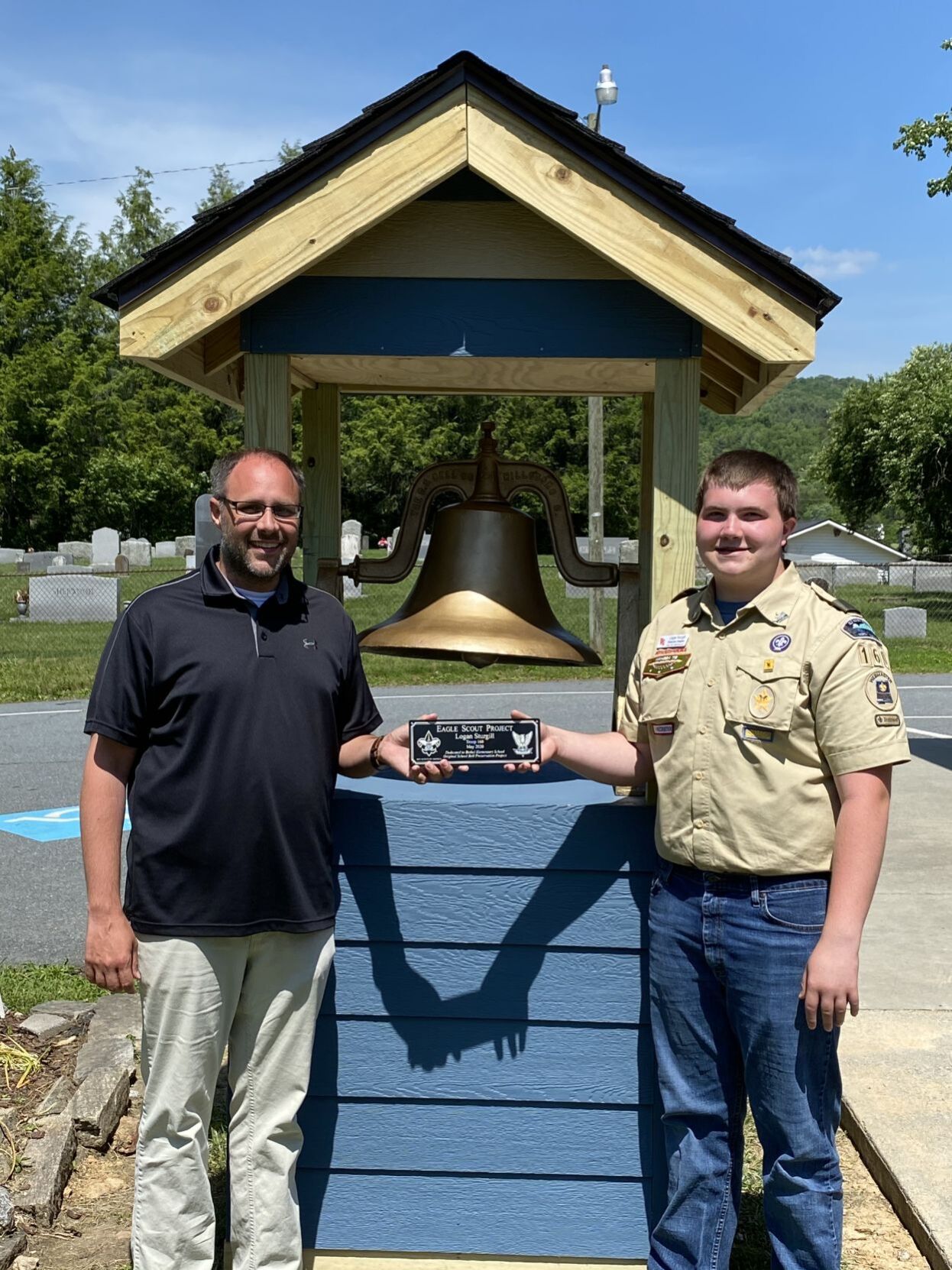 Bethel Principal Brian Bettis and Logan Sturgill celebrate the finished project of a structure to house the school’s historic bell. 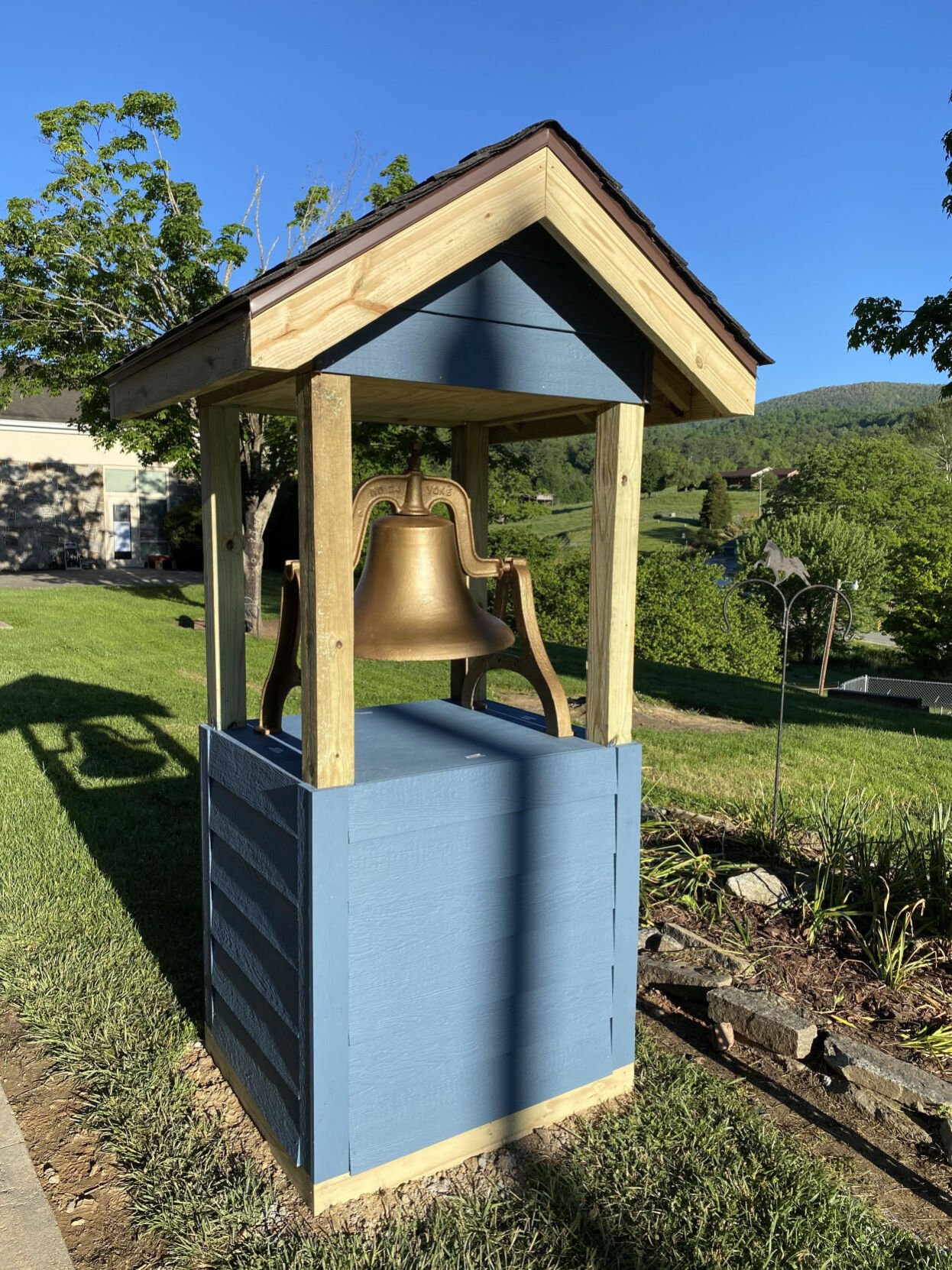 Modeled after a well house, a structure built by a local Eagle Scout will both display Bethel’s antique bell and offer it protection from the elements.

Bethel Principal Brian Bettis and Logan Sturgill celebrate the finished project of a structure to house the school’s historic bell.

Modeled after a well house, a structure built by a local Eagle Scout will both display Bethel’s antique bell and offer it protection from the elements.

BETHEL — When rising Watauga High School Senior Logan Sturgill set out to find an Eagle Scout Project, he was immediately drawn toward work that could have a positive impact on Watauga County Schools — the system where he’s attended since pre-kindergarten at Mabel School.

Sturgill contacted WCS Superintendent Scott Elliott to express interest in doing a project that would also benefit one of the schools in some way. Elliott solicited ideas from the school system’s principals, and then put Sturgill in touch with Bethel Principal Brian Bettis. Bethel School is home to a very large but long neglected school bell which was placed at Bethel School when the building was first constructed by the Works Progress Administration in the 1930s.

Over the years since its original construction, remodeling at Bethel School saw the bell removed from its perch atop the building and stored in the school courtyard, where it has been largely unprotected from the elements for years.

Bettis told Sturgill that finding permanent housing for the old bell had been a potential project at Bethel School for years. Within days, Sturgill was able to take the first steps towards making Bethel’s project a reality, submitting plans and designs for a structure that would house the bell to Bettis for approval.

“Mr. Bettis (told me) about the original school bell and how it was in need of preservation,” Sturgill said. “I thought the idea was cool right from the start, and soon after, began speaking to Mr. Bettis about the idea of preserving the bell for my project. After meeting with Mr. Bettis a few times, I knew that this was what I wanted to do for my Eagle Scout Project.”

Sturgill said when he began work on the project, it quickly became clear how much Bethel School and the history of what its bell represents means to people of the community.

“From the stories Mr. Bettis shared with me, to the number of interested community members who drove through the school parking lot the first day we began building the protective structure for the bell, I was able to hear and see how close the Bethel community is with each other and how important the school and what goes on around it is to them,” Sturgill said.

With the help of friends and family, Sturgill constructed an ideal home for the bell. Similar to a well housing, the structure will allow the bell to be displayed in front of the school while still protecting it from the elements.

Bettis said he was glad to see the bell moved back to a position of prominence at his school.

“This bell is an important piece of history for the Bethel community,” Bettis said. “Community members have told stories of hearing the bell ringing each morning to announce the start of the school day. I am so excited that we are able to have a permanent structure to house the bell. Having the bell in the front school yard will allow members of our community to see this piece of history.”

Sturgill said he was proud to have been a part of preserving an important piece of the Bethel community’s history.

“I believe that by building a new permanent structure for the school’s bell to stand in, it may allow more stories to be recovered from the minds of the previous generations of those who once attended school at Bethel and encourage them to tell others,” Sturgill said. “I like to imagine that the community will enjoy seeing what I consider to be a historic icon to the community based on everything I’ve witnessed throughout the process of this project.”

Sturgill thanked Elliott and Bettis for being helpful and encouraging throughout the process of planning and working on the project. He also thanked Brent Neaves, owner of High Country Carpentry LLC, and Boone Lowe’s Home Improvement Store Manager Dawn Roach for the donation of nearly all the materials needed to complete the project.