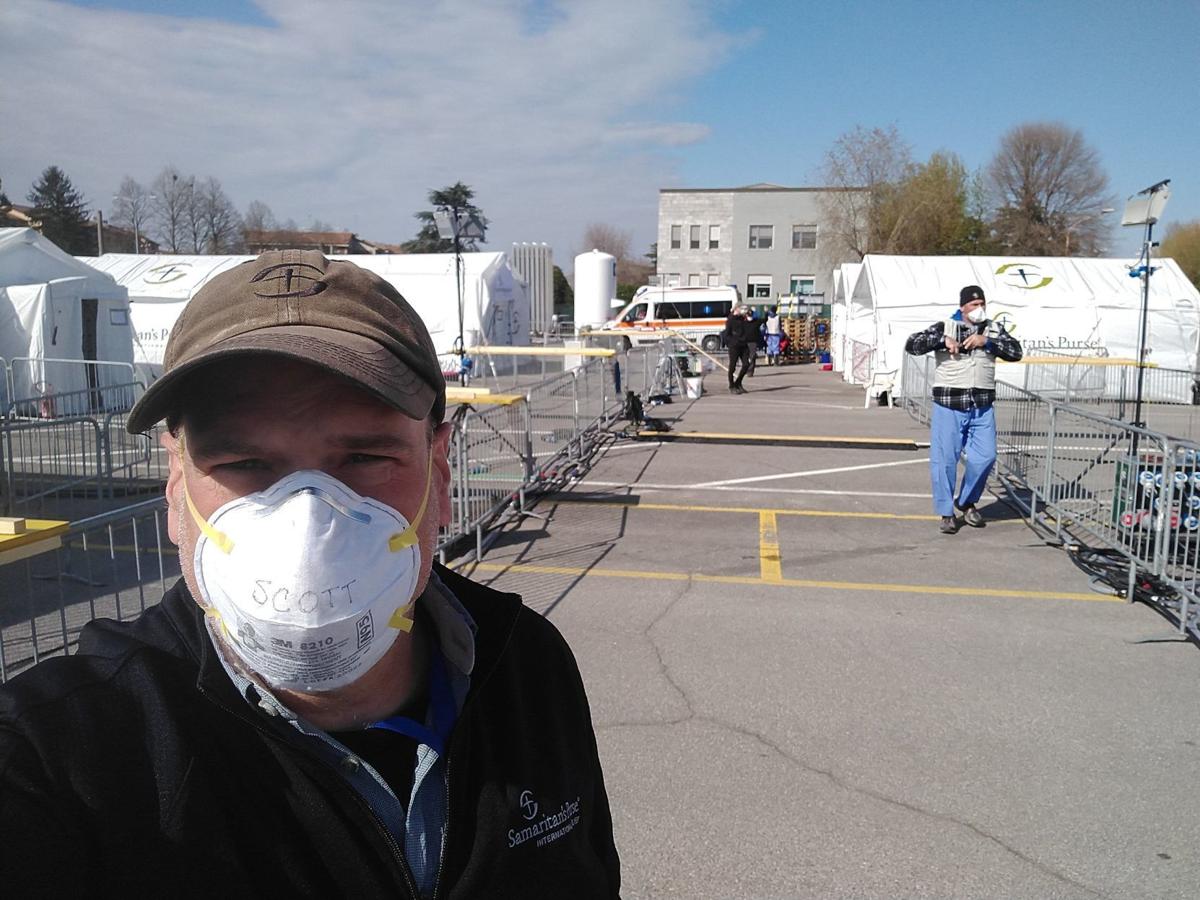 Scott Powell takes a photo in Cremona, Italy, during his deployment to assist with COVID-19 response. 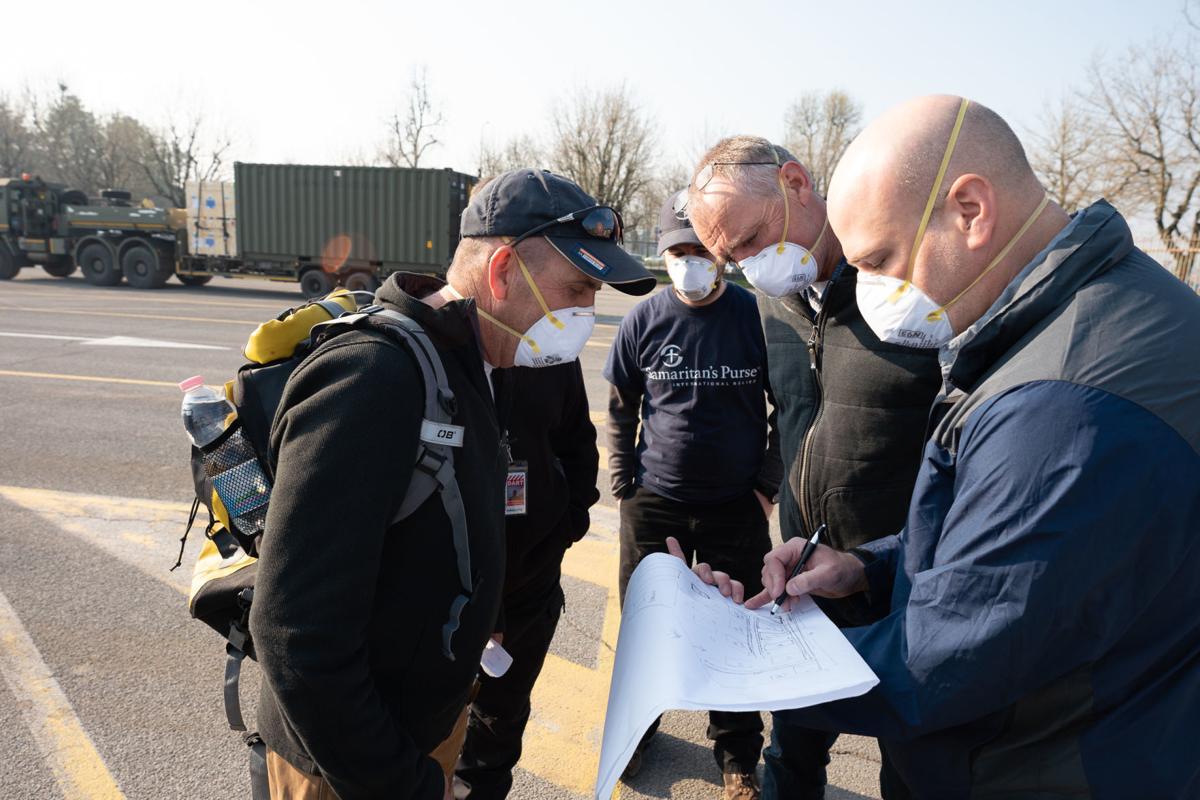 Scott Powell (right), senior global technical advisor for water, sanitation and hygiene with Samaritan’s Purse, draws out a plan for his team during the COVID-19 outbreak in Cremona, Italy.

Scott Powell takes a photo in Cremona, Italy, during his deployment to assist with COVID-19 response.

Scott Powell (right), senior global technical advisor for water, sanitation and hygiene with Samaritan’s Purse, draws out a plan for his team during the COVID-19 outbreak in Cremona, Italy.

In 2017, High Country resident Scott Powell was on St. Maarten, an island in the Caribbean, assisting the Boone-based Christian nonprofit Samaritan’s Purse with the aftermath of Hurricane Irma as the storm continued up the Florida coast, headed toward his then-home in Atlanta, Ga., and his wife, Laura.

Powell said on June 17 that his experience of being “deployed as the homeland was suffering from a similar disaster” was not unlike his more recent return home from Cremona, Italy, where he was deployed to help with COVID-19 response efforts in Samaritan’s Purse’s emergency field hospital.

Powell is the senior global technical advisor for water, sanitation and hygiene at Samaritan’s Purse and has been a full-time employee with the organization since July 2018. He is also a member of the Boone chapter of Veterans of Foreign Wars, which launched a foundation-wide #StillServing campaign in May to highlight veterans who continue to serve their communities outside of the Armed Forces.

Upon his return to the High Country from Italy on April 14, Powell says that he completed his 14-day self-quarantine before returning to work at the Samaritan’s Purse International Headquarters in Boone.

“Going into the epicenter (of COVID-19) helped me to understand how great the suffering can be and it helped me to exercise and advocate for stronger precautions back home. It was somewhat surreal returning home to an environment under a similar lockdown as we experienced in Cremona,” Powell said.

Samaritan’s Purse teams were first deployed to Italy on March 17 due to an overwhelming amount of COVID-19 cases at Cremona Hospital, which left medical personnel to choose which patients had the highest rate of survival.

“As I understood, the local hospital was terribly overwhelmed and having to perform triage reminiscent of World War II,” Powell said. “The staff of the Cremona Hospital were having to make difficult decisions about which patients were most likely to survive as they rationed precious few medical supplies and equipment, such as ventilators. Their beds were full, a number of their staff were sick, and the rest were nearing exhaustion. When Samaritan’s Purse opened the emergency field hospital, our intensive care unit was full within 24 hours and we were able to immediately take some of the patient load off of Cremona Hospital medical staff.”

Powell’s responsibilities in Italy included maintaining the hospital’s water supply lines and “changing out the chlorine disinfection solution,” which means that he often saw the coming and going of Samaritan’s Purse nurses and doctors who were closely interacting with COVID-19 patients.

While the “air was heavy with the occasional passing of patients in intensive care, there were still opportunities to lighten the atmosphere with the love of God,” Powell says, noting that since “family members were not allowed to visit patients, we had to create a family atmosphere of our own.”

“We built into our design something of a central ‘piazza’ where patients could sit in the sun, outside their tents, while we talked and sang songs with them over six feet of double fencing to maintain a safe distance. The Italian people were extremely welcoming of us, and we felt privileged to walk alongside them during this very difficult time in their history,” he said.

During Samaritan’s Purse’s time in Italy, Powell said that the number of COVID-19 cases fell from 6,600 cases per day, at its peak, to 1,400 cases per day as of May 7 when the last patient was discharged from the field hospital.

Powell submitted his story to the VFW #StillServing campaign because, after his service in the military — with the 10th Mountain Division in Bosnia — he felt “uniquely called” to use the God-given engineering skills he had developed to “serve wherever the need is greatest.”

“Returning to Italy was especially impactful for me, knowing the storied history of the 10th Mountain’s service there in World War II. When the epicenter of this pandemic shifted to Central Park, New York, the lessons we learned in establishing and operating a respiratory care unit in Italy helped Samaritan’s Purse to replicate a similar facility there,” Powell said. “We would not have been as prepared to serve at home had we not ‘run to the fire’ and deployed to the epicenter of the outbreak in Europe first.”

View and submit #StillServing campaign stories on the VFW website at https://todaysvfw.org.

Find more information about Samaritan’s Purse COVID-19 relief efforts in Cremona, Italy, and New York City, along with its other ongoing efforts, at www.samaritanspurse.org.