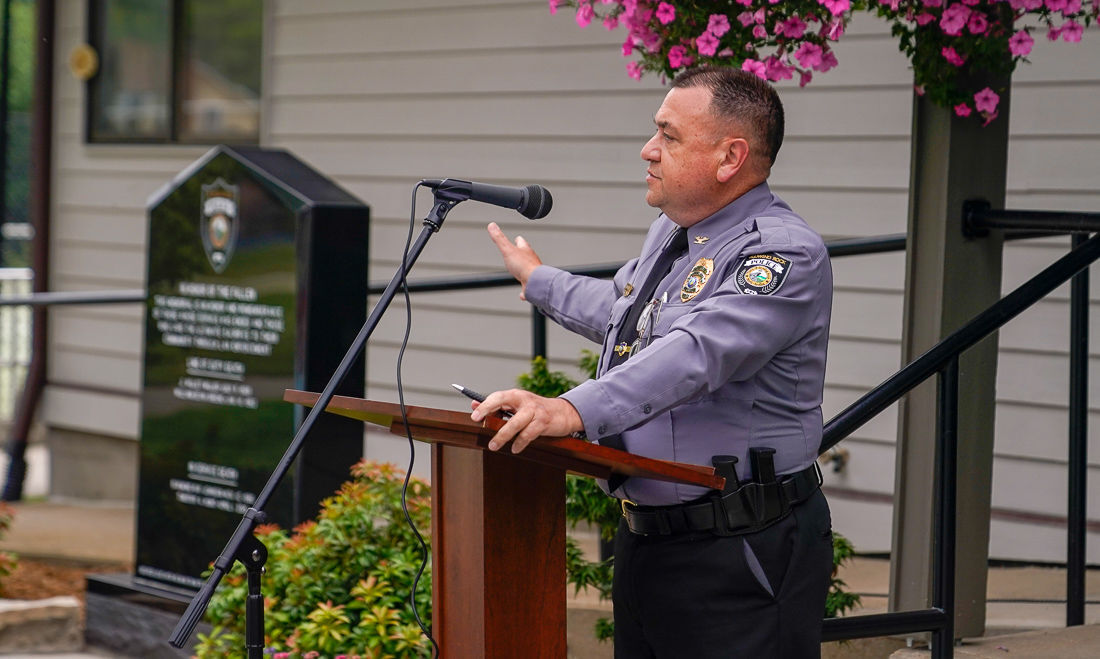 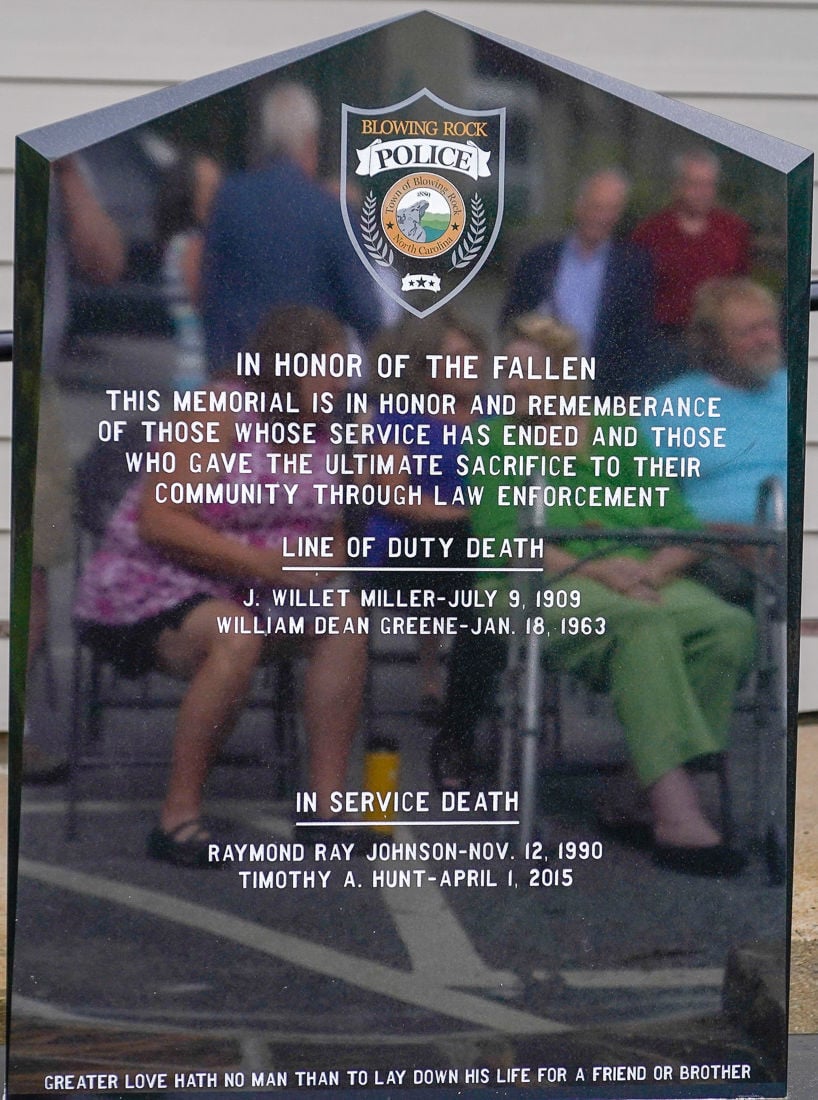 The Blowing Rock Police Memorial to fallen officers was dedicated in a July 13 ceremony.

A large crowd is on hand for the Blowing Rock Police Memorial dedication ceremony, July 13.

BLOWING ROCK — As if understanding the significance of the moment, early evening showers were held at bay on July 13, long enough for the Blowing Rock Police Department to host a special ceremony to dedicate a new “Blowing Rock Law Enforcement Memorial” in front of the police station on Park Avenue.

Blowing Rock police chief Aaron Miller served as the emcee and host for the event and began by acknowledging that it was overshadowed by the recent deaths of town employees or their family members. He referred specifically to Public Works staff member Justin Mullett; Mike Steele, a former employee of the town and the father of current Parks & Recreation employee Thomas Steele; and the wife of landscape specialist Will Allison before also adding the recent loss of Watauga County Sheriff’s deputies Chris Ward and Logan Fox, with a nod to Sheriff Len Hagaman in attendance.

Miller also acknowledged the contributions of the Blowing Rock Community Foundation and private donors for making the memorial possible, as well as the work of Newland-based Spear Memorials who crafted the dark marble monument.

In addition, the police chief thanked The Mustard Seed for its landscaping contributions, The Best Cellar for supplying the food and beverages for the reception, as well as the many staff members of the Parks and Recreation and Public Works departments who worked on the project and the memorial’s installation.

Miller offered some historical background to the decision to erect the memorial, which began with the tragic death of Tim Hunt on April 1, 2015.

“He took his own life,” said Miller, and then explained that Hunt was a longtime veteran of the U.S. Navy, a retired Second Class Petty Officer. After his military service, Hunt had been a corrections officer, as well as a deputy sheriff in Iredell, then Wilkes counties. He subsequently served as a military contractor in Iraq and Afghanistan, heading a K9 explosives detection unit. Then he became a police officer, eventually joining the Blowing Rock police force.

“What we learned later,” said Miller, “is that he suffered from PTSD (post traumautic stress disorder), which is real.”

Miller added that “Police officers are not superhuman. There is frustration, concern, anger. A lot of emotional baggage can be bottled up after a while, to be carried around.”

For Miller, there were times when the emotions surfaced as he talked about Hunt and the three other officers who either died in the line of duty or while in service. Like Hunt, Ray Johnson was not killed in the line of duty, but while serving as a Blowing Rock Police officer.

“Ray died Nov. 12, 1990, when the tractor he was driving on his family farm rolled over,” said Miller. “He was said to be quite a character around town and liked by so many.”

There was a mere hint at levity when Miller recognized Willet Miller, who was shot and killed by a Bill Baldwin on July 7, 1909. Chief Miller said that not all of the details were known, but that his wife had conducted a lot of research at the Appalachian State University archives of the Watauga Democrat. She eventually found an article about the incident, and it is believed that he was serving a warrant on Baldwin for the transport of alcohol when the suspect pulled a pistol from his overalls and shot the officer. The incident occurred near the intersection of Main Street and Sunset Drive.

Finally, on Jan. 18, 1963, then police chief William Greene followed a suspicious vehicle leaving a house in town, finally getting the car stopped down the mountain toward Lenoir. Somewhere around the old salt bins, Miller said, the perpetrators shot Greene.

Miller said he had been given a cassette recording of the 911 call by the wife of an investigating FBI officer.

“I’m shot. I don’t think I am going to live,” Miller quotes Greene as saying on the recording. But he continued to be a police officer, said Miller, providing information to the dispatcher on the car’s description, the license plate number and a description of the four suspects before he succumbed to his wounds.

“If William Greene had not continued to be a police officer even after he was mortally wounded, it is unlikely that those people would have been apprehended. But because of his information and descriptions, they were,” said Greene.

Miller concluded his remarks by saying, “Much has changed here in the Blue Ridge Mountains since the turn of the 20th century when Willett Miller was shot and killed on Main Street. Modern police cruisers have replaced the horses that carried peace officers through the hills back then. Pursuing South American drug smugglers is far more commonplace than searching for bootleggers. Stealing horses has taken a back seat to identity theft. But for our police officers, sheriff’s deputies, state troopers and other law enforcement officials, some things remain constant. It is the long hours of working cases, the hundreds of miles traveled in the pursuit of justice, the time away from home and the missed baseball games of our children, the harsh physical environments that we sometimes have to endure. These hardships remain for our officers and their families. Most of all, there is the ever present danger. The unknowing. It is that juncture when without even a moment’s warning tragedy occurs.”