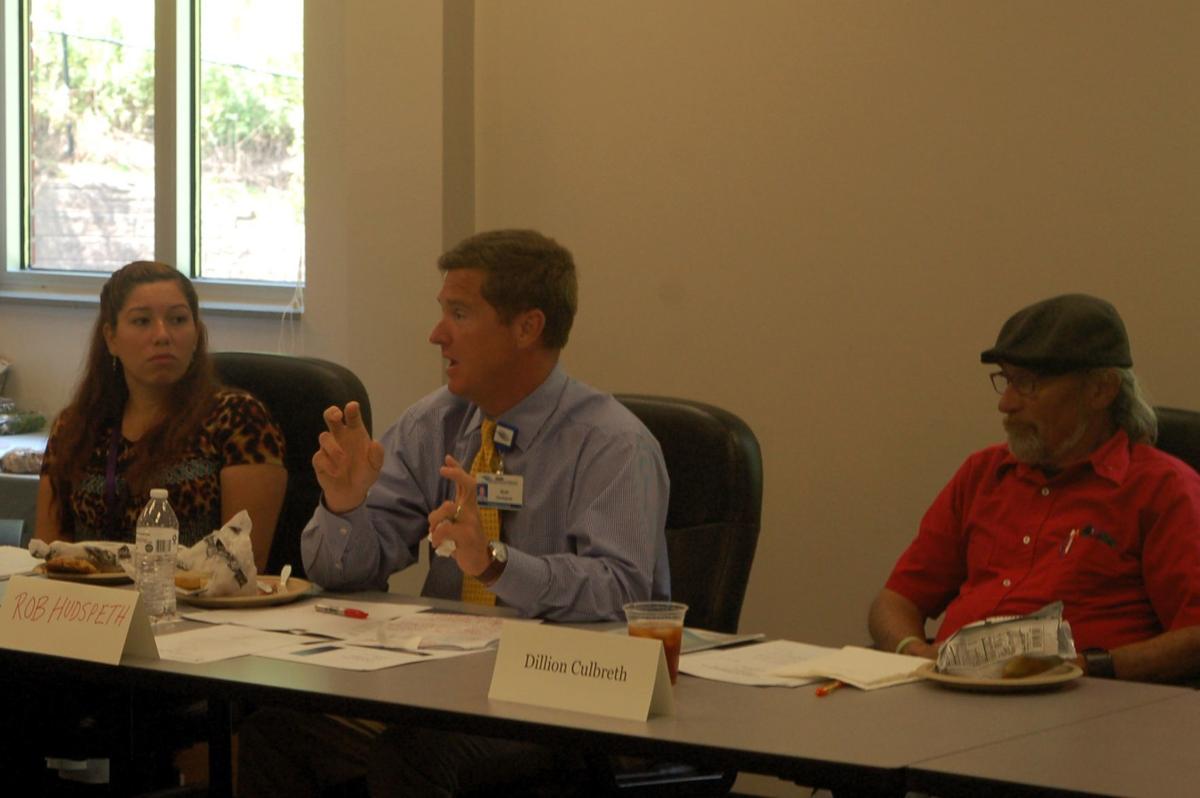 Rob Hudspeth a service president of system advancement at Appalachian Regional Healthcare System, center, speaks during a round table on Medicaid expansion in Boone on Aug. 12 while Alexandra Noriega of High Country Community Health, left, and Dillion Culbreth, right, of Ashe Outreach Ministries, right, look on. 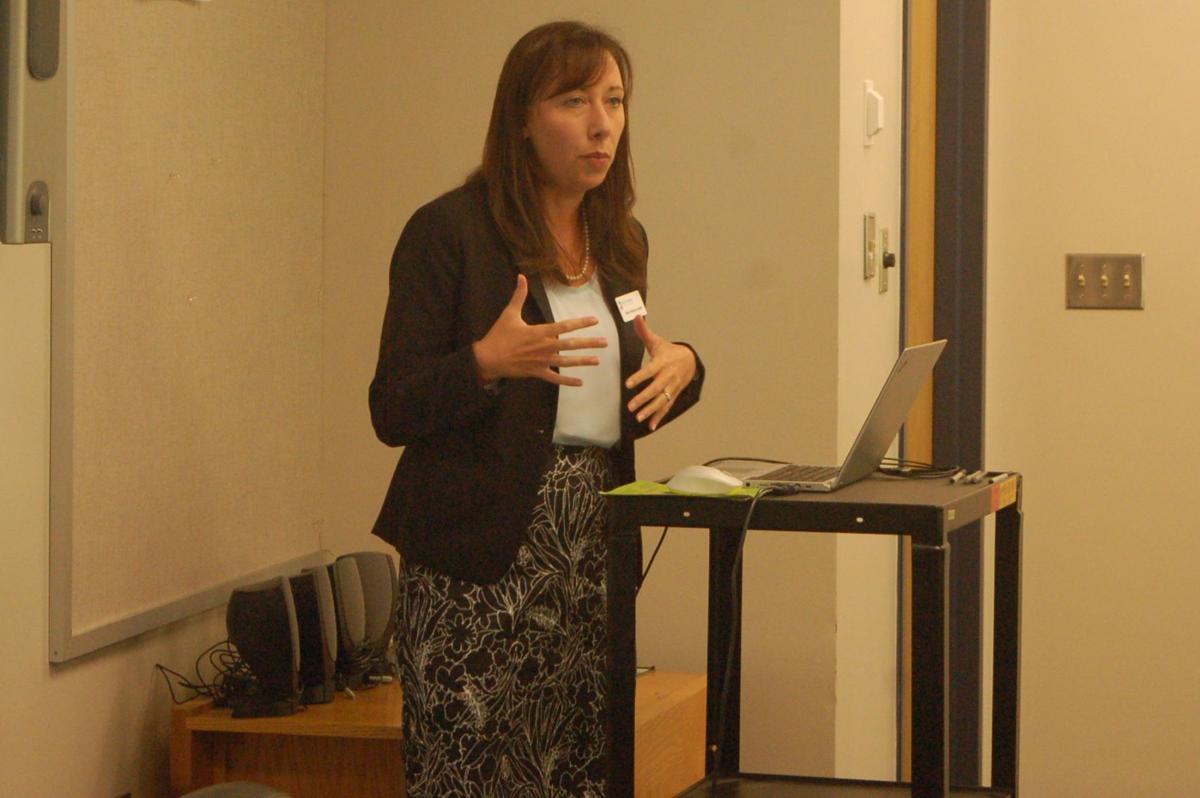 Erica Palmer Smith of Care4Carolina gives a presentation on the effects of no Medicaid expansion in North Carolina during a round table on Aug. 12.

Rob Hudspeth a service president of system advancement at Appalachian Regional Healthcare System, center, speaks during a round table on Medicaid expansion in Boone on Aug. 12 while Alexandra Noriega of High Country Community Health, left, and Dillion Culbreth, right, of Ashe Outreach Ministries, right, look on.

Erica Palmer Smith of Care4Carolina gives a presentation on the effects of no Medicaid expansion in North Carolina during a round table on Aug. 12.

BOONE — Stories of people who can’t afford their medication, having to choose between work and health and much more were discussed by a group of stakeholders representing Ashe and Watauga counties and agencies that cover northwest North Carolina during a meeting on the effects of the lack of Medicaid coverage in the state on Aug. 12.

The roundtable was held at the Watauga Health Center in Boone, hosted by AppHealthCare (public health department) and conducted by Care4Carolina, a Morrisville-based advocacy coalition of health providers, businesses, community leaders and more.

“We know it’s really critical for the people in our communities,” said Peg O’Connell, chair of Care4Carolina. “It’s a people issue; we know it’s important for our neighbors.”

Medicaid is a program that provides coverage for some low-income people, families and children, pregnant women, the elderly, and people with disabilities, according to www.healthcare.gov. Eligibility rules are different for each state. In North Carolina, Medicaid coverage is only available to people below certain income levels who fit in the following categories: 65 years or older, people who are blind or disabled, infants and children under the age of 21, in need of long-term care or receiving Medicare, according to the N.C. Department of Health and Human Services.

North Carolina is one of 13 states who has not expanded Medicaid. Care4Carolina and Raleigh-based child advocacy nonprofit N.C. Child says that currently, a family of three that makes $10,000 a year earns too much to qualify for health insurance through Medicaid in North Carolina, but also can’t get a subsidy to buy insurance in the Affordable Care Act’s marketplace until they make $21,330 a year.

“In all states, your household income must be between 100-400 percent of the federal poverty level to qualify for a premium tax credit that can lower your insurance costs,” healthcare.gov states of plans available through the Health Insurance Marketplace.

The able-bodied people who make too much to qualify for Medicaid but don’t make enough to qualify for a ACA subsidy in the insurance marketplace fall into what Care4Carolina calls “the coverage gap.”

Politicians against opting in expanding Medicaid contend that it would be providing unneeded medical funding to able-bodied adults.

Proponents of expanding Medicaid in N.C. say that creating jobs and providing preventative care will drive down premiums and give an economic boost to the state.

At the roundtable, all attending agreed that North Carolina should expand Medicaid.

Jason Gray of the N.C. Rural Center said his agency is in favor of expanding Medicaid coverage, noting the economic boon it would bring to rural hospitals.

“No other state had its rural areas in the state hurt worse by the great recession than North Carolina,” Gray said. “We have counties that are still losing population. Rural areas, hospitals, health care clinics and providers are a critical infrastructure to this community.”

Gray said that 75 percent of rural hospitals that have closed have been in states that didn’t expand Medicaid.

“There is no policy the state of North Carolina can consider in the next four to five years that will have the consequence and impact of closing this gap,” Gray said. “Any downside is so minuscule it is not a credible argument in my humble opinion.”

Lisa Bottomley, director of the Community Care Clinic said that if Medicaid expanded, over 50 percent of their patients would qualify.

Numerous stories about people who are affected by the lack of Medicaid expansion in N.C. were shared.

Alexandra Noriega, community outreach director at High Country Community Health, shared a story about a widow who no longer qualified for her husband’s coverage because he committed suicide. Noreiga said the women just sat in the office and cried.

“One of the hardest things about my job is to say ‘you don’t make enough money to qualify for help,’” Noriega said.

Smith shared the story of a child care worker she knew who took vinegar to take care of her heart disease. The woman hoped to get to the emergency room in time in case of a serious event, but died before doing so, Smith said.

The Community Care Clinic in Watauga County, a nonprofit, only sees people who are uninsured, Bottomley said, and that the patients are so grateful for the services they receive. Bottomley said patients have offered to paint the office or do forms of manual labor as a way to show their gratitude. AppHealthCare’s Jennifer Greene added that a patient does their landscaping as a way to give back.

Some locals who were present told stories about their efforts to minimize the effects of no Medicaid expansion in N.C.

Cody Darnell of the Ashe Community Paramedic program spoke about the effect that program has on the community, which aims to reduce repeat emergency room visits and establish better resource navigation with patients with in-house visits.

Darnell estimated the paramedic program has brought $150,000 in savings to Ashe County Memorial Hospital over the last eight months as a conservative estimate.

Derrick Lail, owner of RevFive5 Fitness in Boone, spoke about a program he runs out of his gym that helps to establish support systems using accountability to promote healthy lifestyle choices and try to cut down on chronic health issues, but said it’s not sustainable due to customer’s inability to pay.

“I’m using profit margins to fund pilot programs,” Lail said. “Out of the last 10-person pilot, five were able to stay and invest in themselves.”

N.C. Rep. Ray Russell, a Boone Democrat and expansion proponent, listened to the stories and presentations. Russell said he has not talked to a medical professional anywhere who is against Medicaid expansion and that it’s becoming less of a partisan issue going forward.

“I really believe when this story is written, we’ll get Medicaid expansion,” Russell said. “It really is one of the defining issues of our time.”