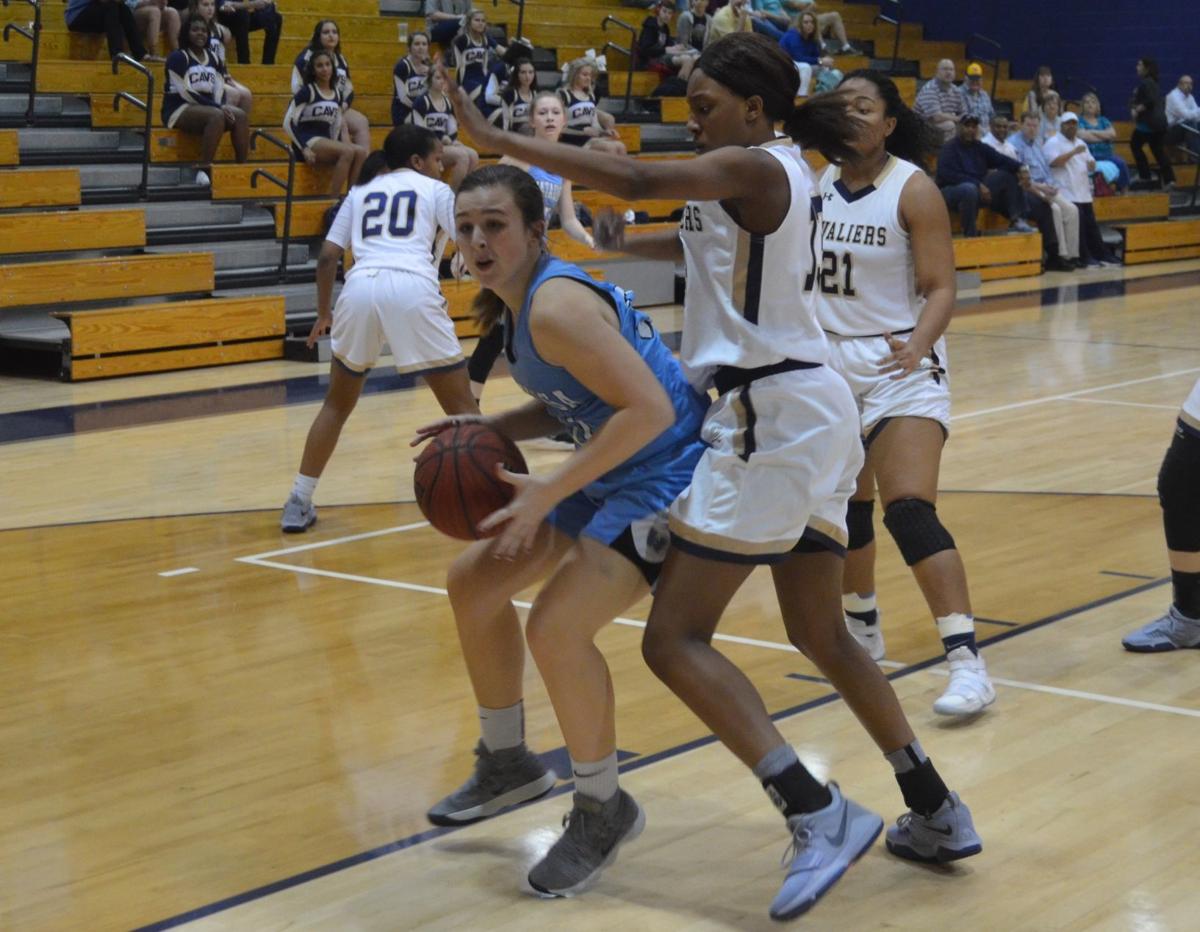 Watauga’s Madie Darner (30) backs down Kamaria Sheriff (13) of Cuthbertson. Darner had 15 points in the Pioneer loss. 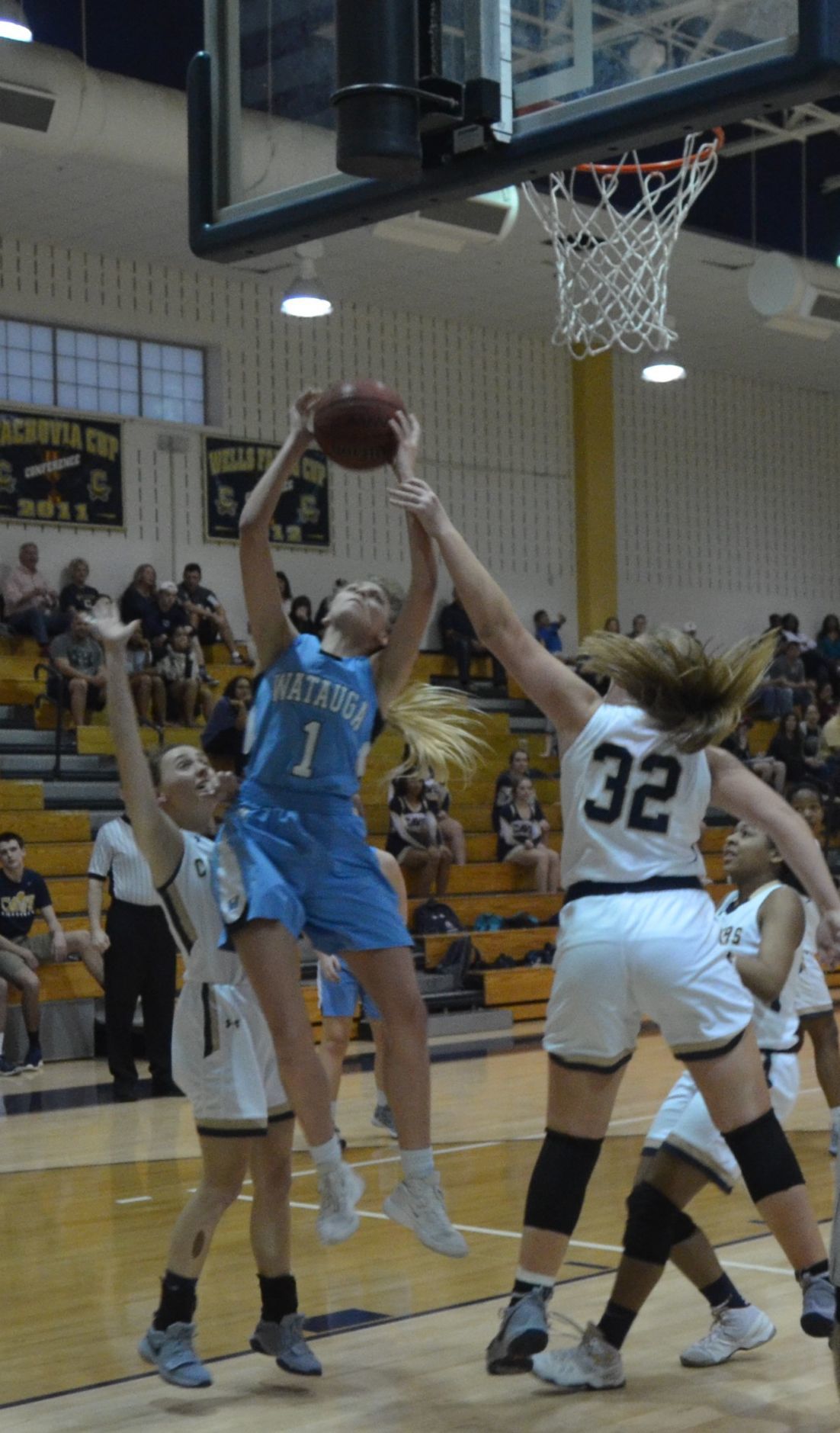 Brooke Byrd (1) goes up against two Cuthbertson defenders. Byrd had nine points in the contest. 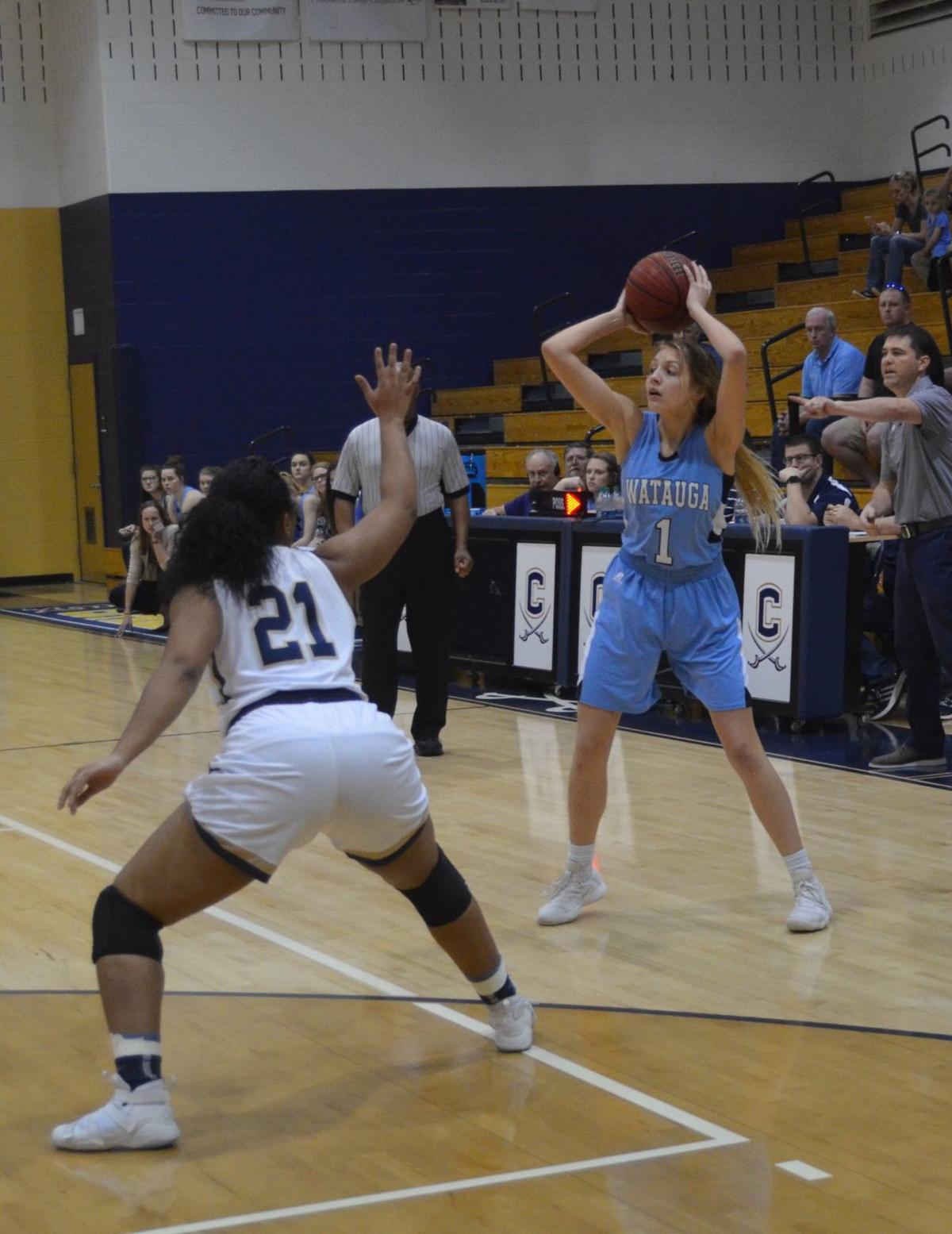 Watauga’s Brooke Byrd (1) looks to pass over Cuthbertson’s Lauryn Hardman (21). Hardman had the game-winning free throw to beat the Pioneers.

Watauga’s Madie Darner (30) backs down Kamaria Sheriff (13) of Cuthbertson. Darner had 15 points in the Pioneer loss.

Brooke Byrd (1) goes up against two Cuthbertson defenders. Byrd had nine points in the contest.

Watauga’s Brooke Byrd (1) looks to pass over Cuthbertson’s Lauryn Hardman (21). Hardman had the game-winning free throw to beat the Pioneers.

WAXHAW — In a game that went down to the final three tenths of a second, the Watauga girls’ basketball team saw its season come to an end in a heartbreaking fashion.

The Pioneers fell to the Cuthbertson Cavaliers 46-45 in the second round of the NCHSAA 2018 3-A Women’s Basketball Championships after Watauga was called for a controversial foul with just 0.3 seconds left in the game.

After battling back in the second half to tie the score and eventually regain the lead, Watauga’s Parris Bolick was whistled for a blocking foul with 0.3 seconds left in the game and the score tied 45-45. Cuthbertson’s Lauryn Hartman made one of the two ensuing free throws, and the Cavaliers (21-5) escaped with the win.

Watauga’s season ended with a 22-5 record in a season that saw them grab a share of the Northwestern Conference regular-season championship. That didn’t ease the pain of a loss that was tough for the Pioneers to take.

“That game should have been decided in overtime,” Watauga head coach Laura Barry said. “That was no way to end a game that was that good on both sides. I don’t understand that last whistle at all, and I won’t for the next year.”

In the fourth quarter, both teams continued to take the lead from one another. With minutes to play, Maddisen Robinson drained a 3-pointer to tie the score at 40. After both teams scored, Robinson converted on a floater and later a free throw, and the Pioneers led 45-42.

With 29 seconds to go, Watauga fouled Cuthbertson’s Lillian Anderson, and she converted an old-fashioned three-point play. The score was tied at 45 with seconds remaining.

The Pioneers held the ball for a last second shot, as Brooke Byrd drove for the potential game-winning basket. Her shot was blocked by Anderson and Hartman grabbed the ball.

After Bolick’s foul, it took just one free throw to end the best Watauga (22-5) women’s basketball season in more than 20 years.

Cuthbertson head coach Joel Allen said that his team was in a similar situation in the first round of the playoffs in an overtime victory over Union County rival Piedmont.

“We did a good job of not losing our composure when they took the lead,” Allen said. “Our girls held it together, and we didn’t panic.”

Throughout the first half, the Pioneers struggled to score. The Cavaliers played scrappy defense, diving on the ground for loose balls and playing the passing lanes.

Throughout the quarter, both teams looked out of sync. Missed layups, wild passes and miscommunications created skirmishes on the boards and on the floor. However, a late layup converted by Cuthbertson’s Kayla Young and two missed free throws by Watauga’s Madie Darner helped bump the Cavaliers’ lead 16-11 by halftime.

In the second half, Watauga came out with new energy and quickly tied the contest. After being blocked on a breakaway by Young, Watauga’s Brooke Byrd stayed with the play and converted on a three point play.

“We did a great job coming out in the second half coming out more composed,” Barry said. “There were a lot of turnovers in the first half, and I didn’t think we were quite ourselves. We weren’t quite at our right tempo. I was very happy to only be down six at halftime.”

Minutes later, after another Cavalier turnover, Bolick would make a free throw to tie the game. The Cavaliers would make a run of their own near the end of the quarter, thanks to a three from Kaylin McKinney, a breakaway from Young and free throws from multiple other contributors.

Maddie Dillinger also had eight of her 16 points in the third, helping shrink Cuthbertson’s lead by six going into the final quarter.

Barry said she tried to pull the focus from the loss when she addressed her team after the game.

“I tried to make it bigger than tonight even though I was mad as fire when I was talking to them,” Barry said. “There’s more of a sadness to their upset, and I’ll be really sad tomorrow. I’m really mad tonight.”

Despite the heart-wrenching loss, Barry said her players especially her seniors, have had a huge impact on Watauga basketball.

“They need to know that, and I think they’ll know it more over the next few weeks as we get a chance to look back at it and celebrate,” Barry said. “That was not a great game to end on, and that’s going to hurt them as they move on from here, but the impact they’ve had on their teammates, their coaches and on our school community has been great.”