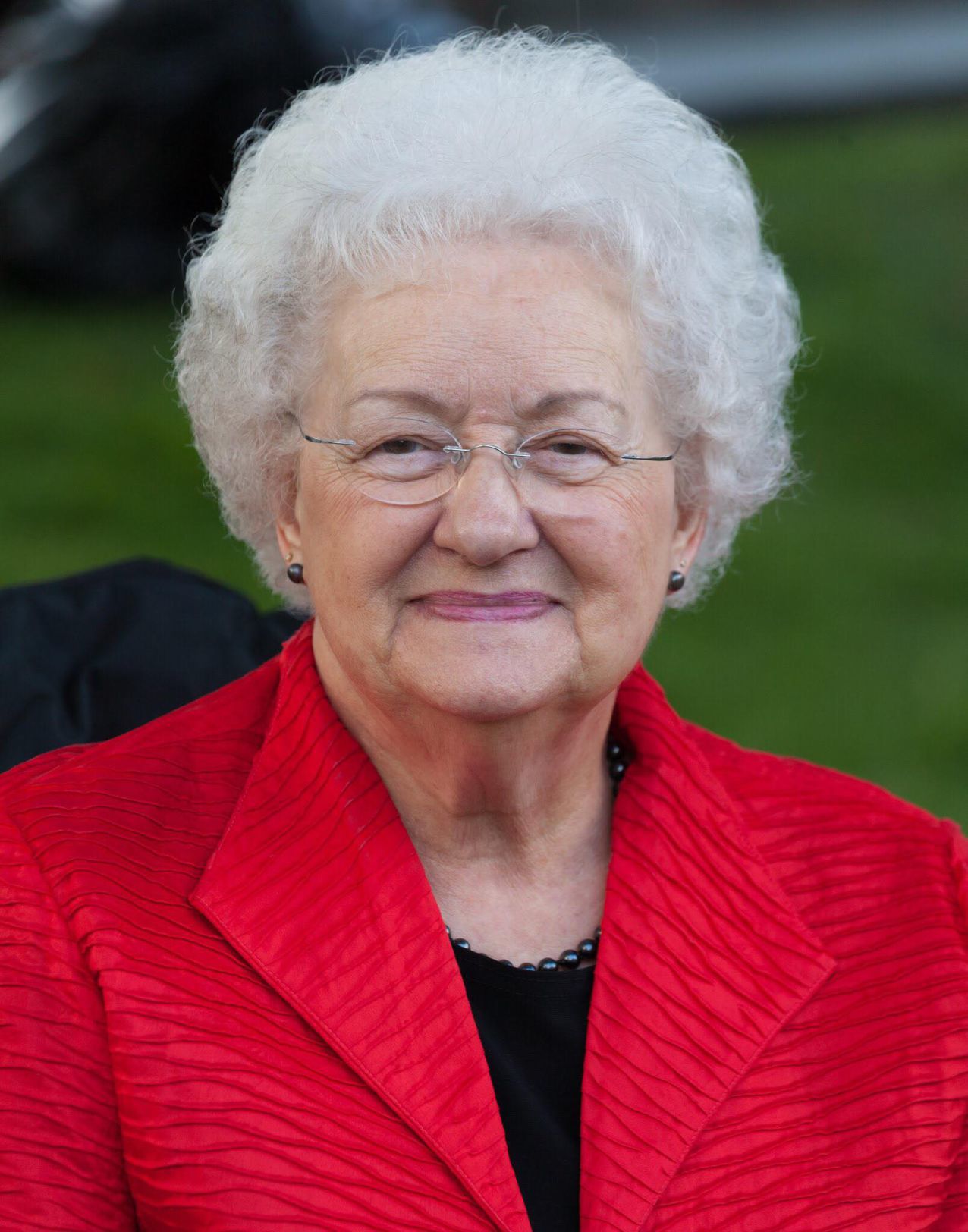 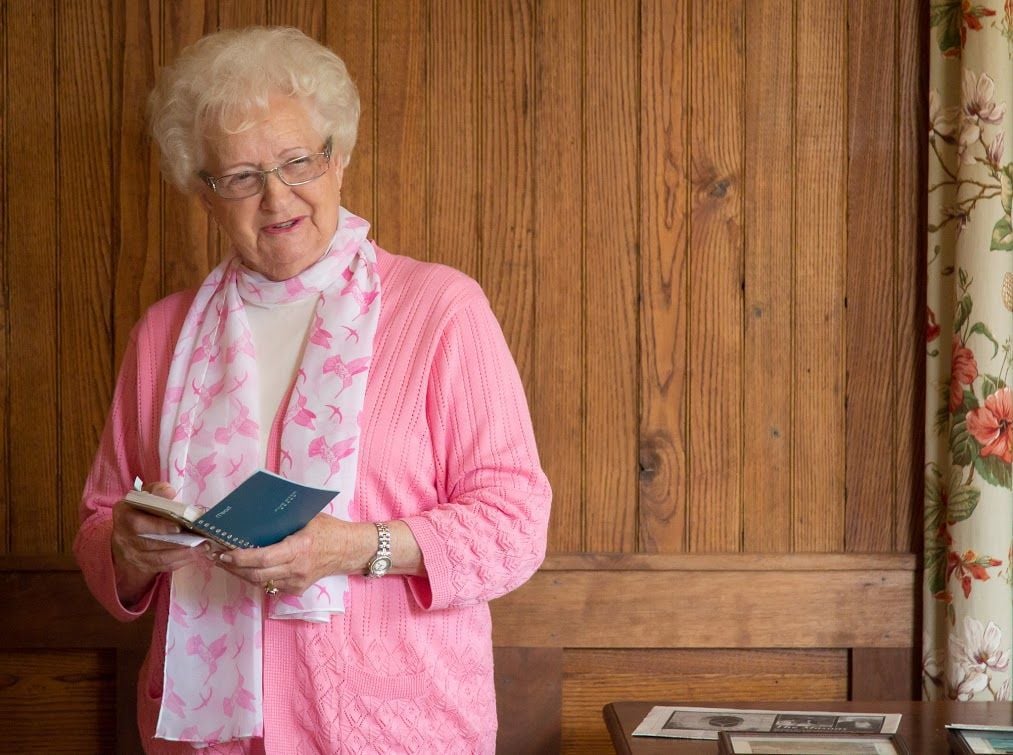 Betty Pitts, left, speaks at the annual Jerry Burns Day, held at the Rumple House in Blowing Rock on June 18. 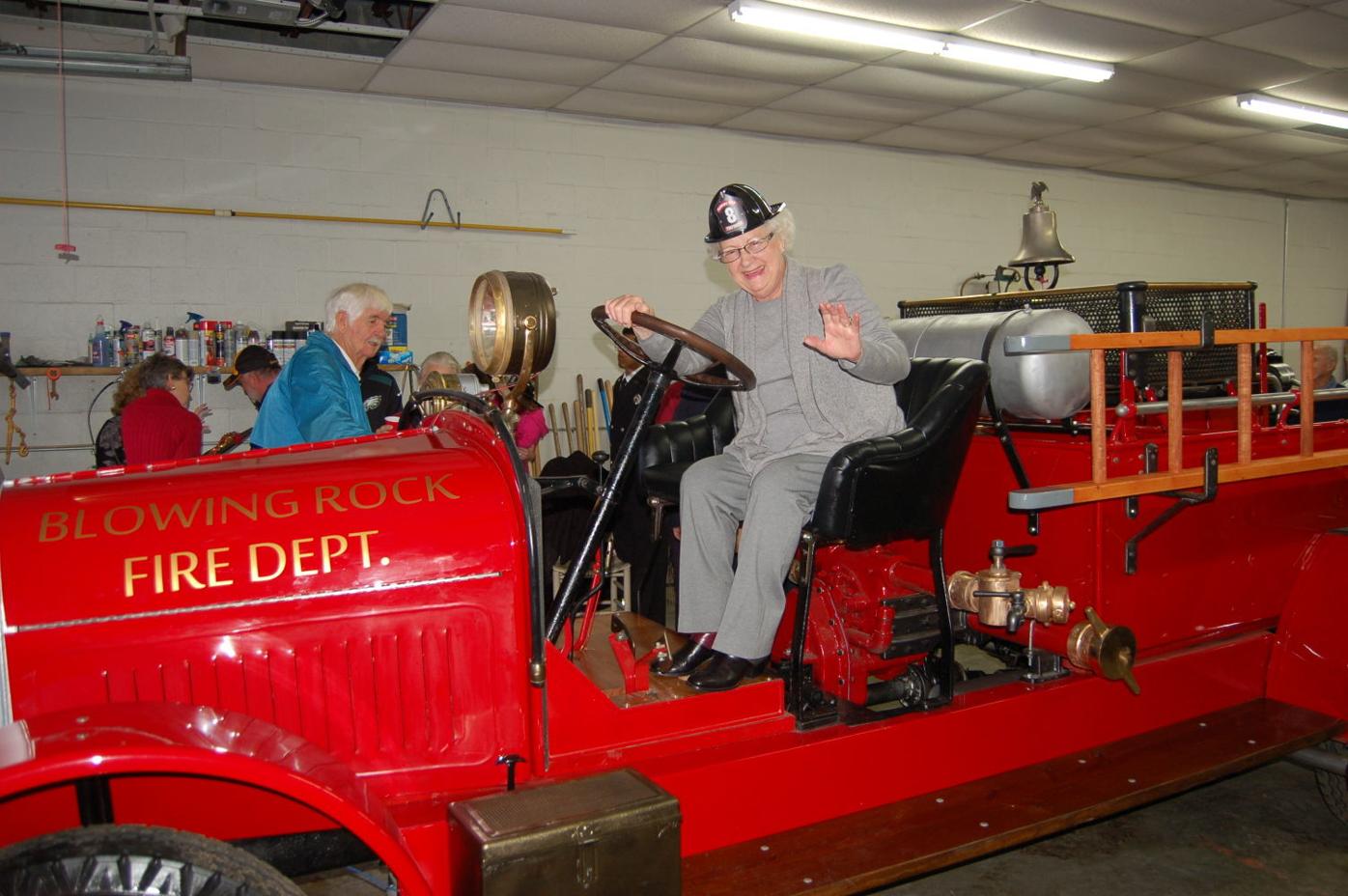 Betty Pitts gets behind the wheel of the newly restored fire engine in September 2015. 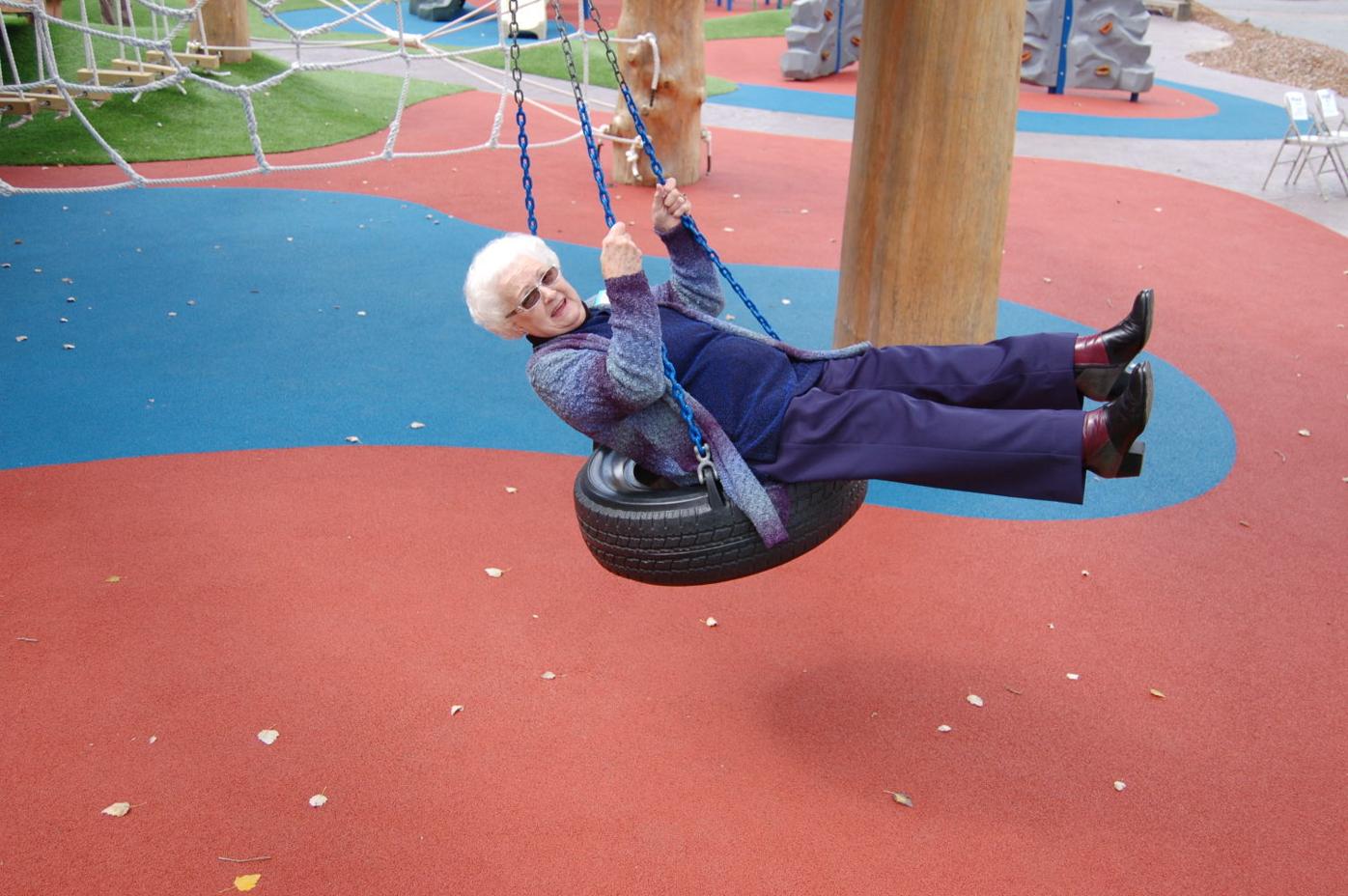 Betty Pitts tries out the new-fangled tire swing at the Blowing Rocket School playground in October 2015.

The first ‘Quiet Corner’ by Betty Pitts. See page 2 to read the text. 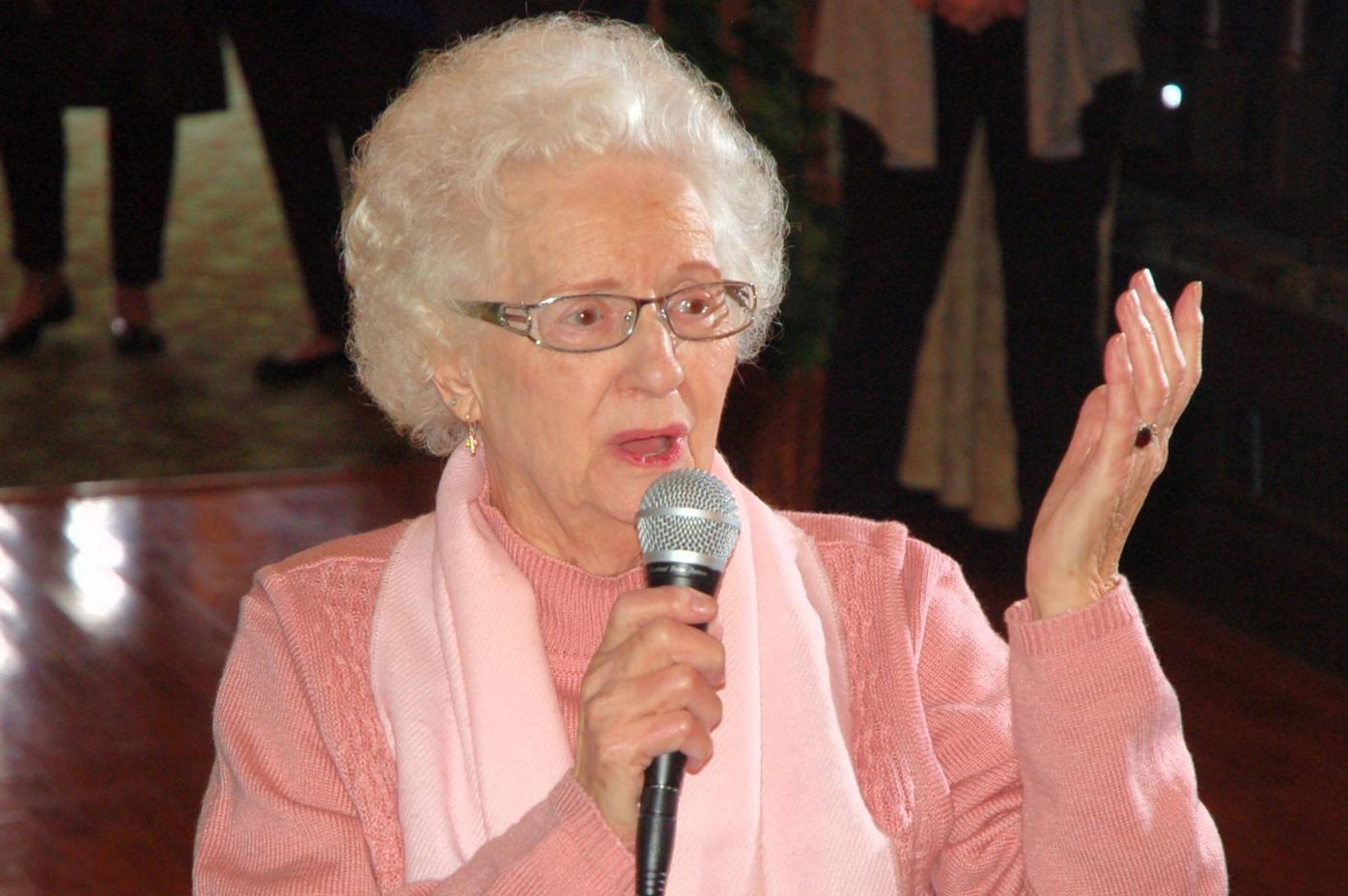 Betty Pitts, left, speaks at the annual Jerry Burns Day, held at the Rumple House in Blowing Rock on June 18.

Betty Pitts gets behind the wheel of the newly restored fire engine in September 2015.

Betty Pitts tries out the new-fangled tire swing at the Blowing Rocket School playground in October 2015.

The first ‘Quiet Corner’ by Betty Pitts. See page 2 to read the text.

BLOWING ROCK — Betty Pitts, former “First Lady” and matriarch of Blowing Rock, tireless volunteer and columnist with The Blowing Rocket since 1994, died Sunday, June 3, at the age of 88.

“Mama went to heaven this morning at 9:16 a.m.,” said Lynn Lawrence, Betty’s daughter, in an email to Betty’s mailing list on June 3. “It is ironic that she would go to heaven on Sunday. She missed singing in the choir. She is singing in the heavenly choir now!”

Pitts was born Sept. 11, 1929, in the middle of what is now Devil’s Lake on top of Seven Devils. Pitts said in a 2013 speech that she was delivered by “Granny Yarber,” who was paid two chickens for her delivery.

“My brother was more expensive — he cost my parents a pig,” Pitts said.

Pitts’ late husband, Hayden, served as Blowing Rock mayor from 1977-1983 and 1985-1993. The two had an old Exxon station where the Blowing Rock Market is now. There, patrons often found a listening ear and a compassionate heart. Hayden often brought people home for supper and sometimes they ended up staying until they got back on their feet — many times way past supper and often for days at a time.

“My grandparents, Grover and Lena Roberts, had their home where the (Blowing Rock) chamber is now,” Blowing Rock Mayor Charlie Sellers recounted. “We used to go to Hayden and Betty’s Exxon gas station and get ice cream, which was right behind my grandparents’ house, and Ms. Betty would get us ice cream, give us a little push-up, was always good to us and told us to go and play in the park.”

Along with Hayden, Betty helped found the Blowing Rock Rescue Squad back in the 1970s, buying its first ambulance, along with Carl Underwood.

“She and her husband started the Blowing Rock Rescue Squad and were the ambulance squad,” said current Blowing Rock Fire Chief Kent Graham. “You had Hayden driving, Betty in the back praying over you and Norman, their son, as the treating EMT. They did a lot of ambulance rides.”

Pitts served as chair of the March of Dimes drive in Blowing Rock in the 1960s and 1970. She was chosen as the president of the Hilltop Parent Association and was honored as Parent of the Year at Western Carolina Center.

“I’ve been around longer than the current hospital,” Pitts said at a ceremony honoring her contributions to the hospital in 2013. “And, I gave birth to five of my seven children there, not including my first, who was born in the old clinic. I have always been honored to be a part of the hospital and have tried to do whatever I could to help.”

After her husband’s death, Pitts trained and served as a Watauga County Hospice volunteer. Betty was a lifetime member of Blowing Rock Community Club, where she also served as president.

Pitts knowledge of Blowing Rock’s history and love for stories was something many of her friends will remember.

Webster noted that one story Pitts told was of how Hayden and the Blowing Rock Town Council used their own money to pay for a bra the Blowing Rock garbage collector picked up by mistake. The elderly resident, who had placed it on the garbage can to dry, came to the following town council meeting demanding to be compensated.

In January 1994, after the death of her first cousin by marriage, Geraldine Pitts, Betty took over “The Quiet Corner” column in The Blowing Rocket. The column has appeared every week it was received. In the column, Pitts gave advice, celebrated birthdays, anniversaries, prayed for the sick and downtrodden and mourned those who passed on.

“Her weekly column set her apart; it was a column of inspiration, joy and happiness,” said Cullie Tarleton. “She was everybody’s mother and grandmother. Before she got ill, I would run into Betty two or three times a week at the post office and she was always happy, always smiling, always enjoying life. She was the epitome of classy Southern lady and there’s no other way to describe her. She will be sorely missed.”

In her lifetime, Pitts was awarded Blowing Rock’s Woman of the Year and Blowing Rock’s Citizen of the Year. She served on the RHA Human Rights Board of Directors as a client advocate. Pitts also was named Mother of the Year at Western Carolina Center in Morganton, where her son, Michael, resided for several years in Elm Cottage.

Pitts had also chaired the “care committee” that provided meals for the community’s sick and shut-ins. For more than 20 years, she was also part of the Pitts Family Singers that provides visits and music each month at Blowing Rock Hospital’s Davant Extended Care.

In February, Pitts was honored with the Jerry Burns Ambassadorial Award by the Blowing Rock Chamber of Commerce for going above and beyond in her service to the community.

“She was a pretty amazing gal,” said Peggy Robbins Sellers, who went to school with Pitts. “She was so smart and so diligent, she’s done a lot of good for people. She had a very, very busy life and she never did anything but smile and never admitted how hard she worked.”